EACH YEAR, OVER two million people visit Acadia National Park, making it one of the most visited parks in the country. To combat congestion, the park plans on unveiling a timed-entry reservation system in 2021 that will require visitors to make reservations before driving on some of the most popular roads.

As the northeast’s only national park, Acadia’s popularity comes as no surprise. In such a small and accessible park, avoiding the crowds during peak times can be a challenge — but it isn’t impossible if you know where to go. And you don’t even have to sacrifice visiting the park’s most popular destinations. 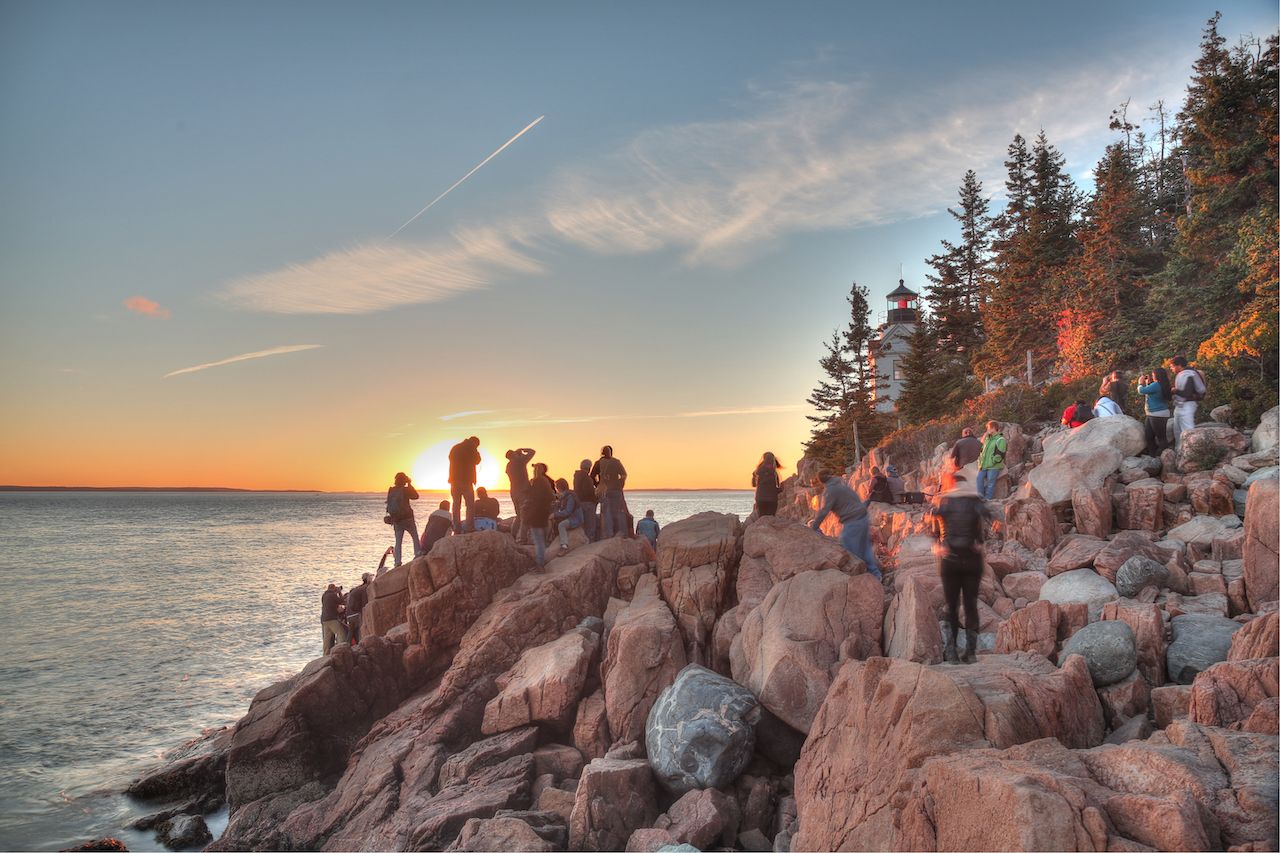 Avoid peak season — Acadia is busiest from early June through late August. And while the summer weather may be the most desirable, enduring chillier temperatures in exchange for solitude is well worth it.

In April and May — the “mud season” according to many New Englanders — the crowds haven’t yet arrived and shops and restaurants have just begun to open (although they often operate on limited hours until Memorial Day weekend). Soft ground conditions, the result of surface run-off and snowmelt, often mean the park’s carriage roads can be closed, so it’s important to check the NPS website before finalizing plans. If visiting during the spring, be prepared for temperatures to drop below freezing, especially at night. 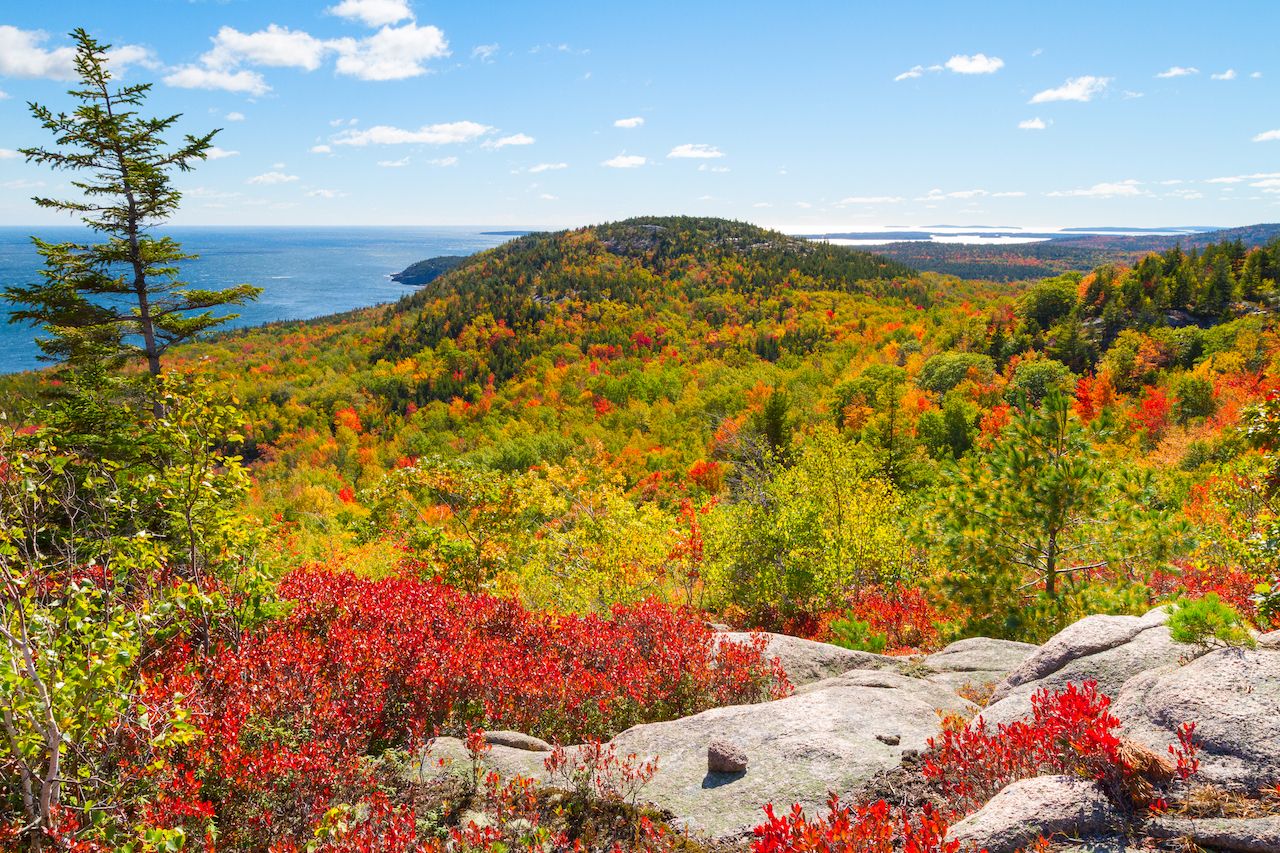 The fall months of September, October, and November are arguably the best time to visit the park. The crowds have dispersed, the ground is dry, and cooler temperatures are just beginning to move in. During early and mid-October, the forest comes alive with vibrant reds, oranges, and yellows, transforming an already spectacular landscape into something the summer crowds don’t get to see. During peak foliage weekends, which often occur during the first few weekends of October, the “leaf-peeping” crowds make an appearance, so weekdays are a better bet.

Winter is one of the quietest times to visit Acadia. On a typical weekday in January, expect to have much of the park to yourself. But the downfall of visiting during the winter is that many amenities, shops, restaurants, and even some roads (including sections of Park Loop Road) are closed. If the lack of amenities and sub-freezing temperatures don’t deter you, experiencing the frozen sea spray on the coastal cliffs and fresh snow blanketing the park will convince you you made the right decision. 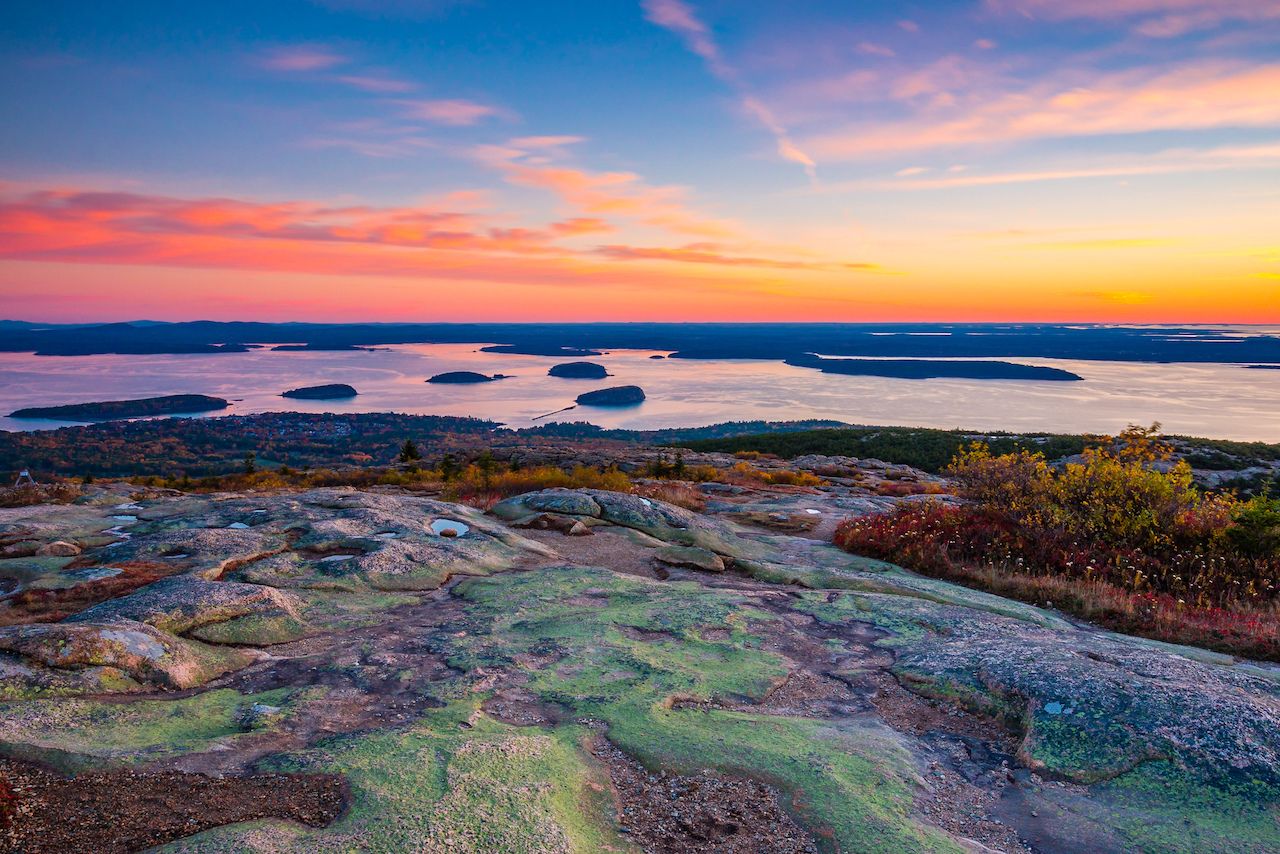 Start early — Not everyone is willing to endure frigid Maine temperatures or is able to get away during a random week in September. That doesn’t necessarily mean you can’t visit during peak season while still minimizing the crowds you come in contact with. It just takes a little extra effort.

Getting to the most popular destinations by sunrise, including the Precipice Trail, will often result in you having it all to yourself. But by 8 AM, such destinations are packed full, with cars lining Park Loop Road. If you can motivate yourself to get there just an hour or two earlier, these spots are usually devoid of people. The one exception is the summit of Cadillac Mountain, which is often filled with people waiting to watch the sunrise. 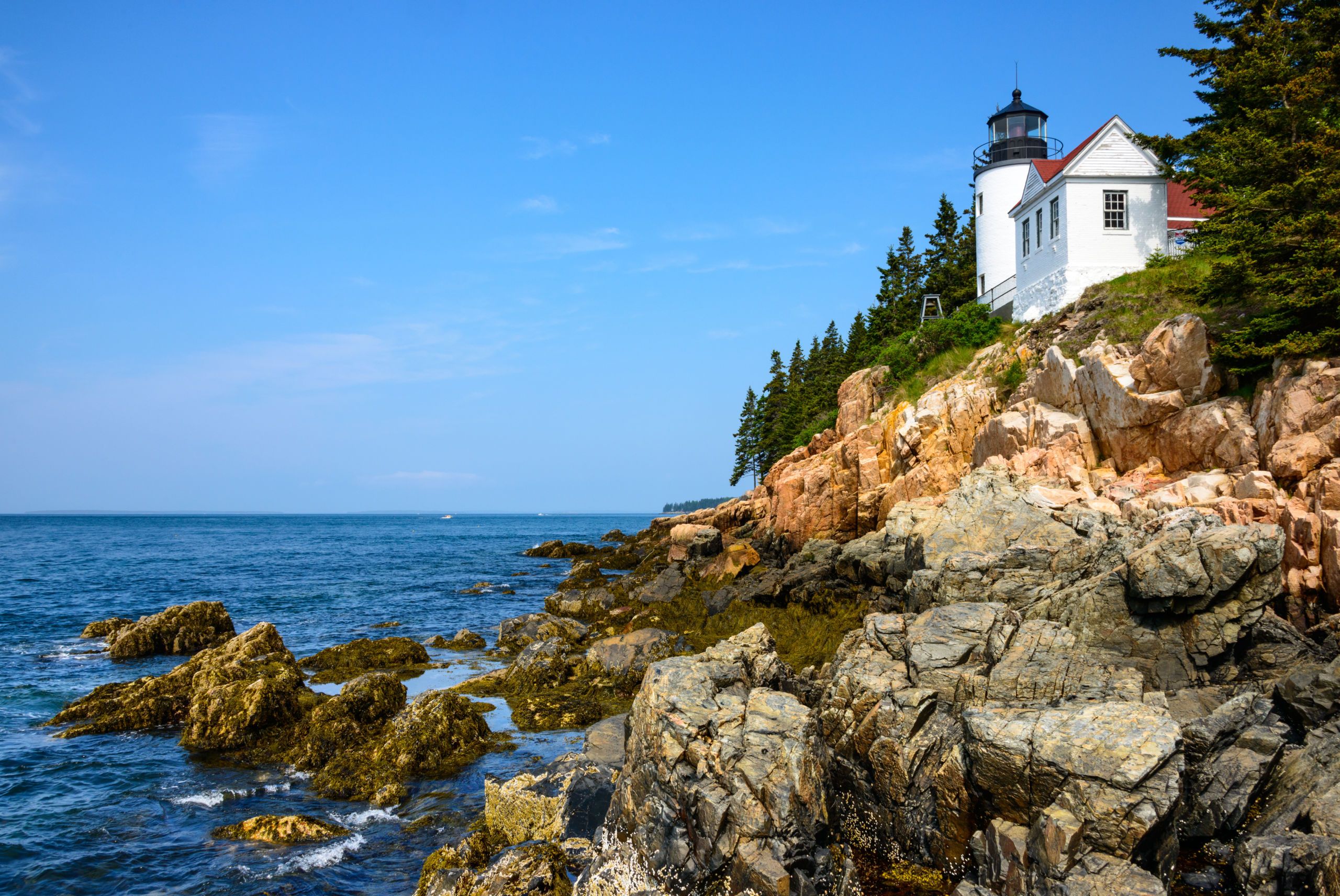 Stick to the quieter parts of the park — Both the Schoodic Peninsula and the southwest side of Mount Desert Island are significantly less crowded than the area surrounding Bar Harbor. The Schoodic Peninsula, which can be reached in about an hour by car or 45 minutes by ferry from Bar Harbor, is home to a smaller, yet no less spectacular section of the park. Consider staying at one of the inns in Winter Harbor or basing yourself at the Schoodic Woods Campground to avoid the crowds altogether.

Commonly referred to as the “quiet side” of the park, the area around Southwest Harbor is just 20 minutes from Bar Harbor by car but sees a fraction of the traffic. Like the Bar Harbor section of the park, this side of Mount Desert Island still has plenty of art galleries, restaurants, inns, campgrounds, and enough views and trails to last the entirety of your vacation — there just aren’t quite as many here. Despite it being less crowded, if you’re hoping to score a site at the Seawall Campground during peak season, it is still recommended to reserve a spot in advance. 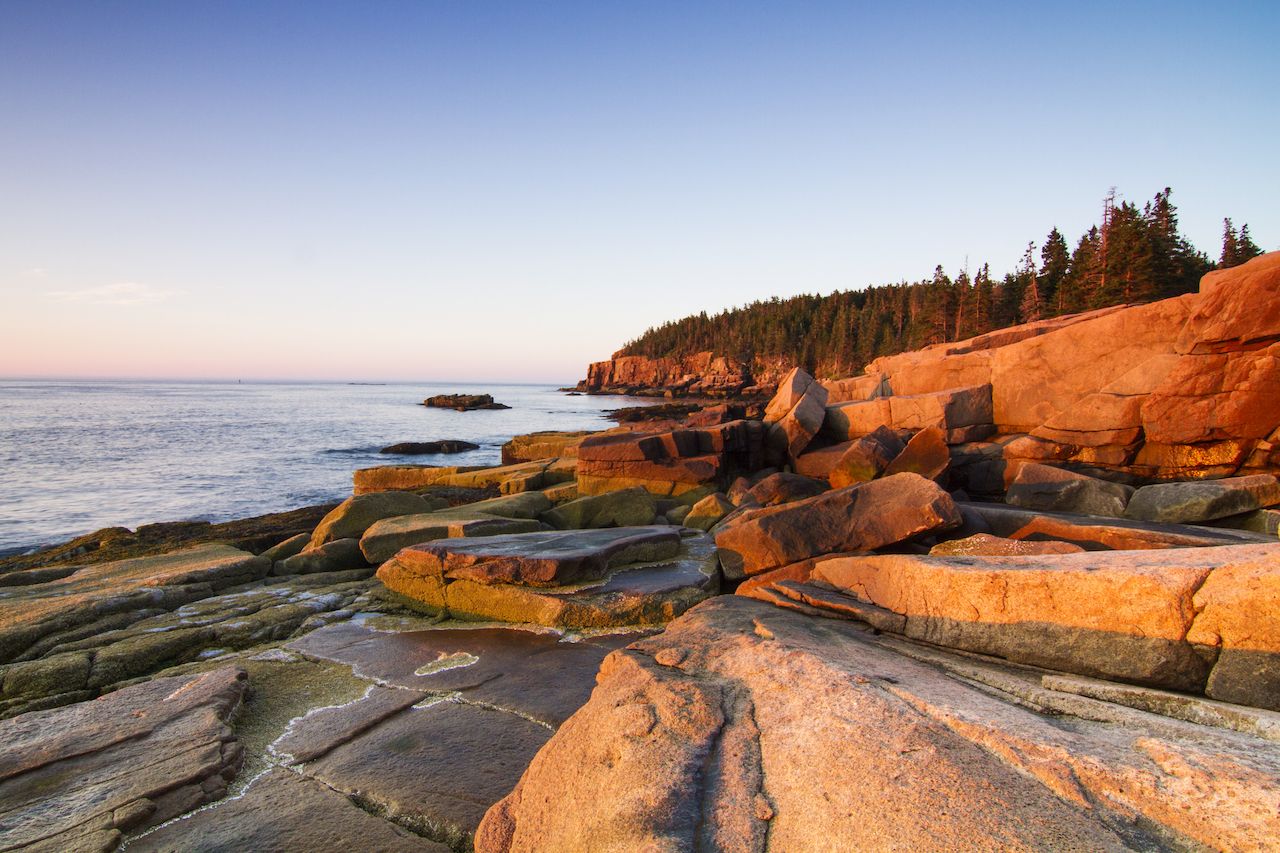 Use the Island Explorer — During the summer months, many of the major trailheads and destinations throughout the park can be reached by the Island Explorer, which is a free shuttle service. It isn’t necessarily a way to avoid the crowds entirely, but it is a great way to help reduce congestion around the park. Not to mention, you won’t have to worry about finding a place to park your car.

The Island Explorer has ten separate bus routes linking inns, villages, campgrounds, trailheads and other destinations to one another across Mount Desert Island and the Schoodic Peninsula. Many trailheads and parking areas are full by mid-morning, making the shuttle service a great option if you don’t want to get up at first light to secure a parking spot.

Tagged
National Parks Maine, United States
What did you think of this story?
Meh
Good
Awesome