With architecture as exquisite on the inside as on the outside, mosques, like churches and synagogues, are must-sees when traveling. From the hand-painted blue tiles of the Blue Mosque to the incredible stained glass of the Nasir al-Mulk Mosque, travelers need not be religious to find appreciation in the face of beauty. If given the chance, make sure you take time to wander through the seven most beautiful mosques from around the world. 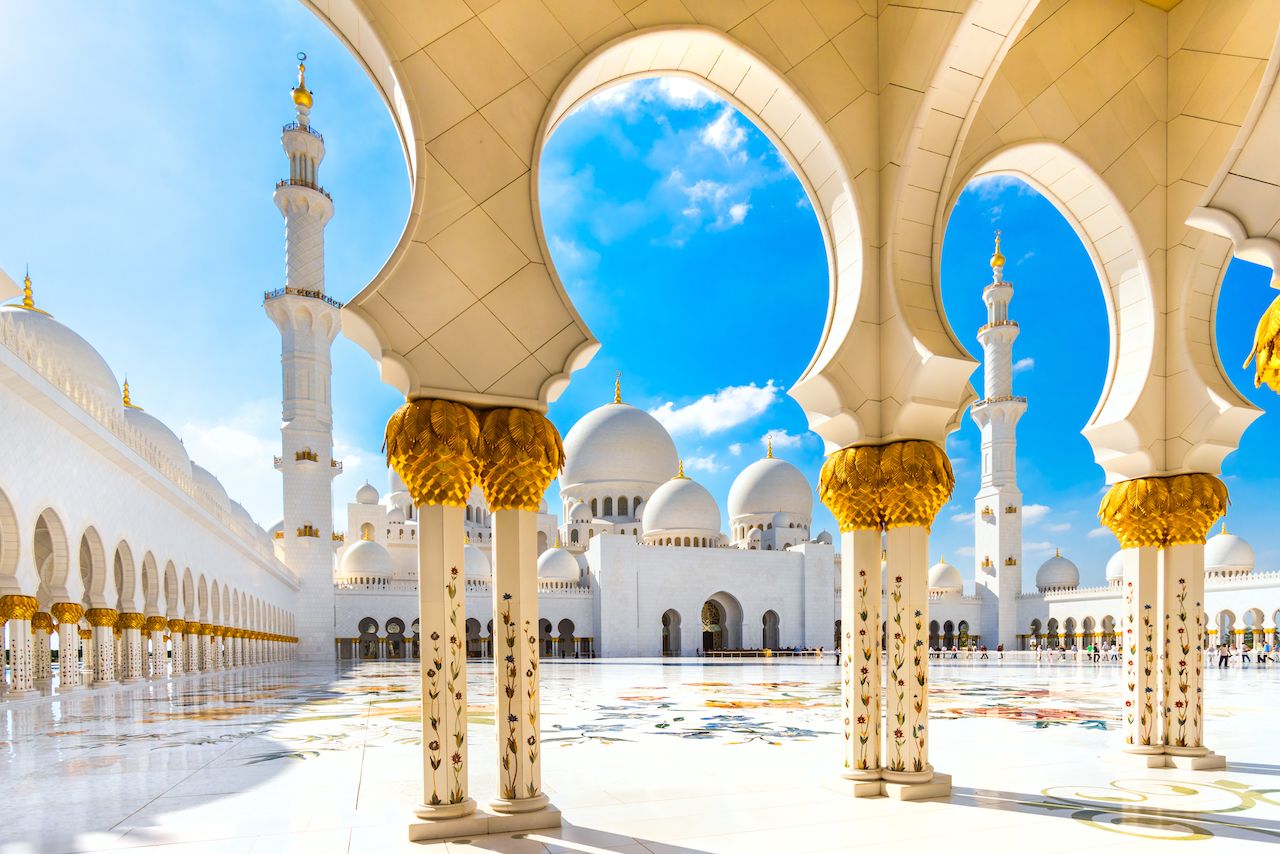 Abu Dhabi’s iconic Sheikh Zayed Grand Mosque is all about extravagance and huge numbers. The beautiful white-and-gold mosque attracted just over 5.79 million visitors in 2017 according to The National, but it can host around 41,000 people at once. The mosque has 82 marble domes held by 1,000 pillars, four tall minarets, and a gigantic marble courtyard. All the pillars and the courtyard are decorated in a gorgeous, colorful botanical design to pay tribute to Sheikh Zayed’s love of nature. The interior is just as over-the-top with the world’s largest hand-knitted carpet covering the prayer hall and impressive 24-carat, gilded crystal chandeliers (the largest weighing 12 tons). This mosque is open daily and free for visitors, but it’s closed to non-worshippers on Friday mornings. The mosque’s lighting system illuminates the building at night, reflecting the phases of the moon, so sunset visits are best to see the transformation. Complimentary robe rentals will be offered upon entry, and shoes are to be removed and placed in an open-space cabinet. 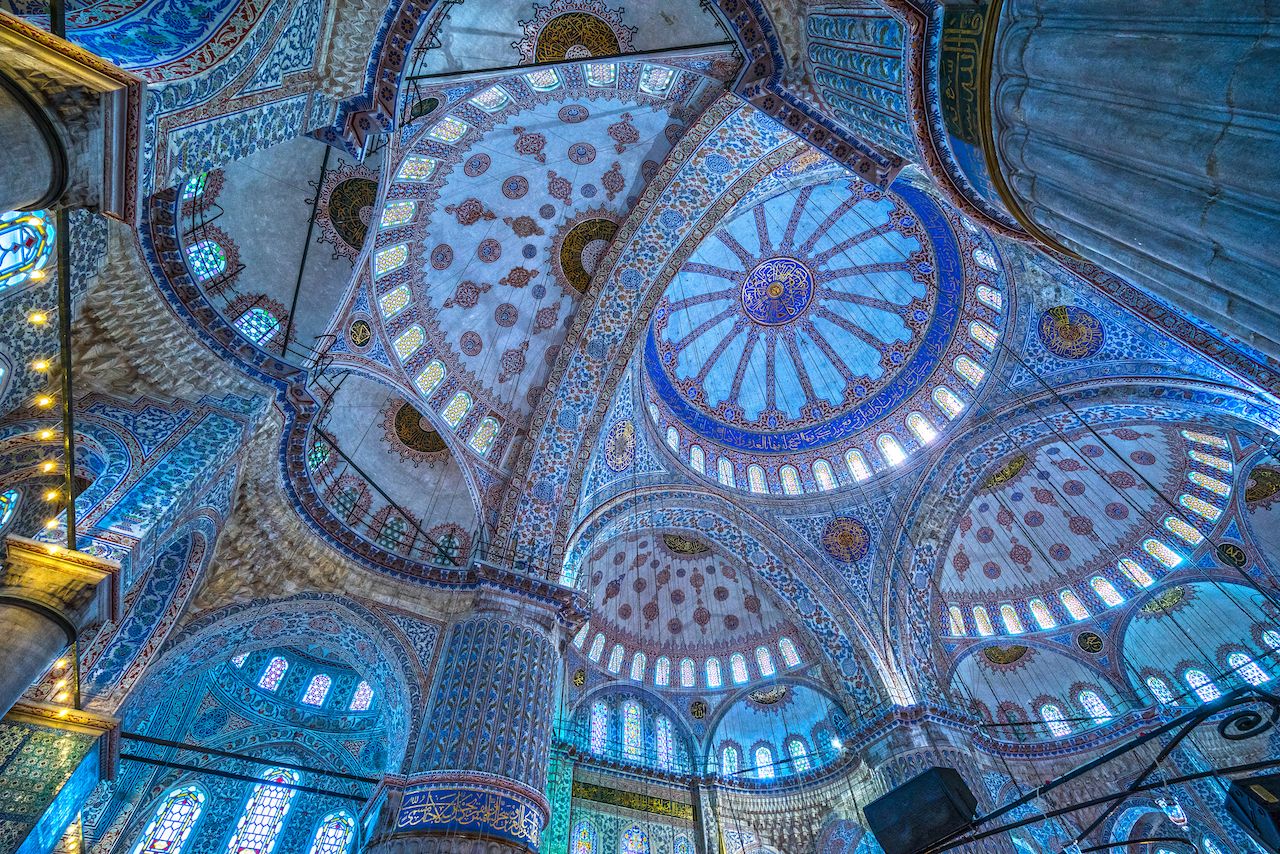 The Blue Mosque‘s interior is adorned with 20,000 hand-painted blue tiles, hence its moniker. (Its official name is Sultan Ahmed Mosque). The tiles at the gallery level are arranged to create amazing flowers, fruit, and cypress designs. In the evening, the ambiance changes as colorful floodlights illuminate the five main domes, six minarets, and eight secondary domes. The mosque has become a popular tourist attraction in Istanbul, but it’s closed to non-worshippers for half an hour during the five daily prayers. The best way to see the architecture in all its glory is to enter the mosque from the west side. Complimentary rentals of headscarves and pants are available at the entrance, and shoes are to be removed and placed in the complimentary plastic bags provided. 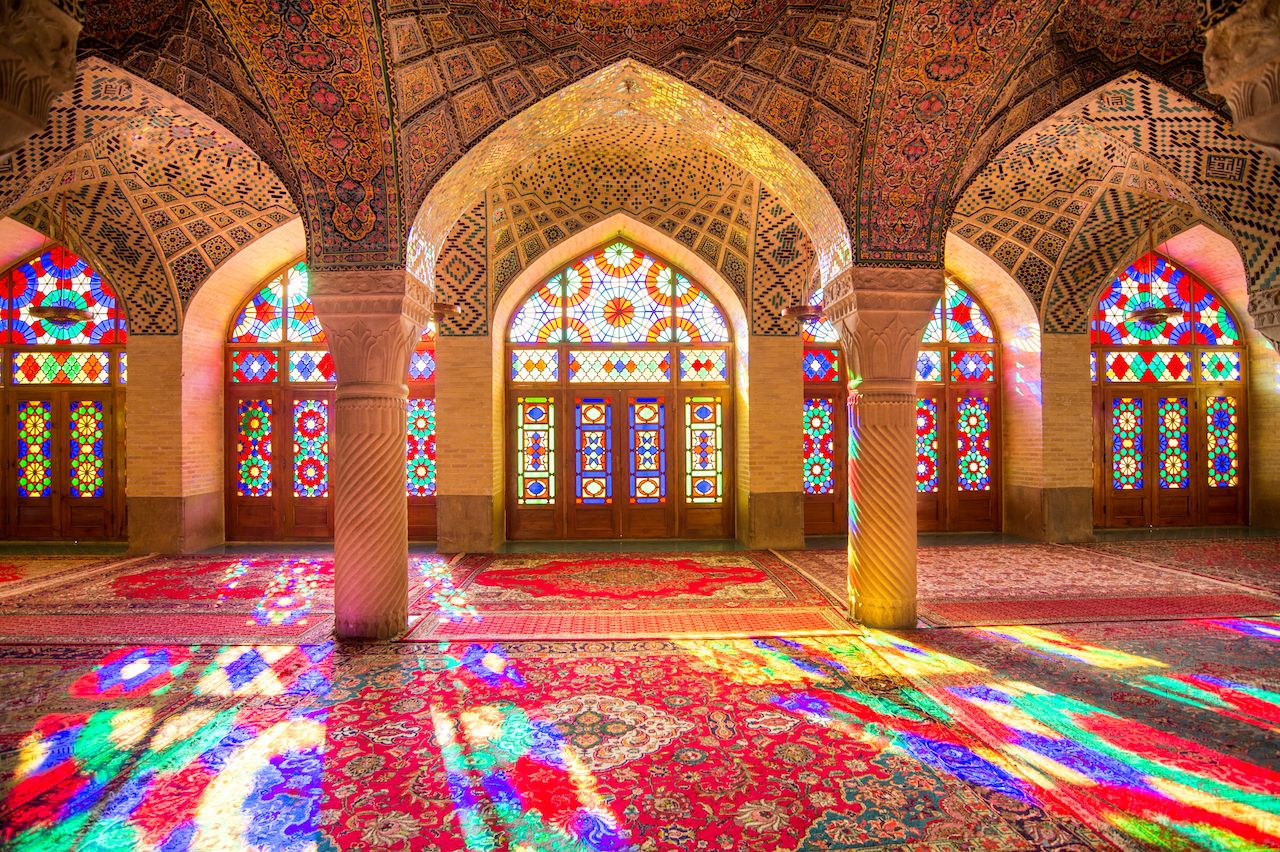 Shiraz’s mosque of whirling colors, the Nasir al-Mulk Mosque — also known as the Pink Mosque — captures the eye with its striking stained-glass windows, intricately painted tiles, and carved pillars. This mosque is best experienced in the early morning when sunlight streams through the stained-glass windows and brightens up the whole interior with vibrant colors like the inside of a kaleidoscope. For a small entrance fee, this mosque is open to the public. Visitors are to abide by conservative dress with a headscarf for women, no exposed shoulders or knees, and shoes are to be removed prior to entry. 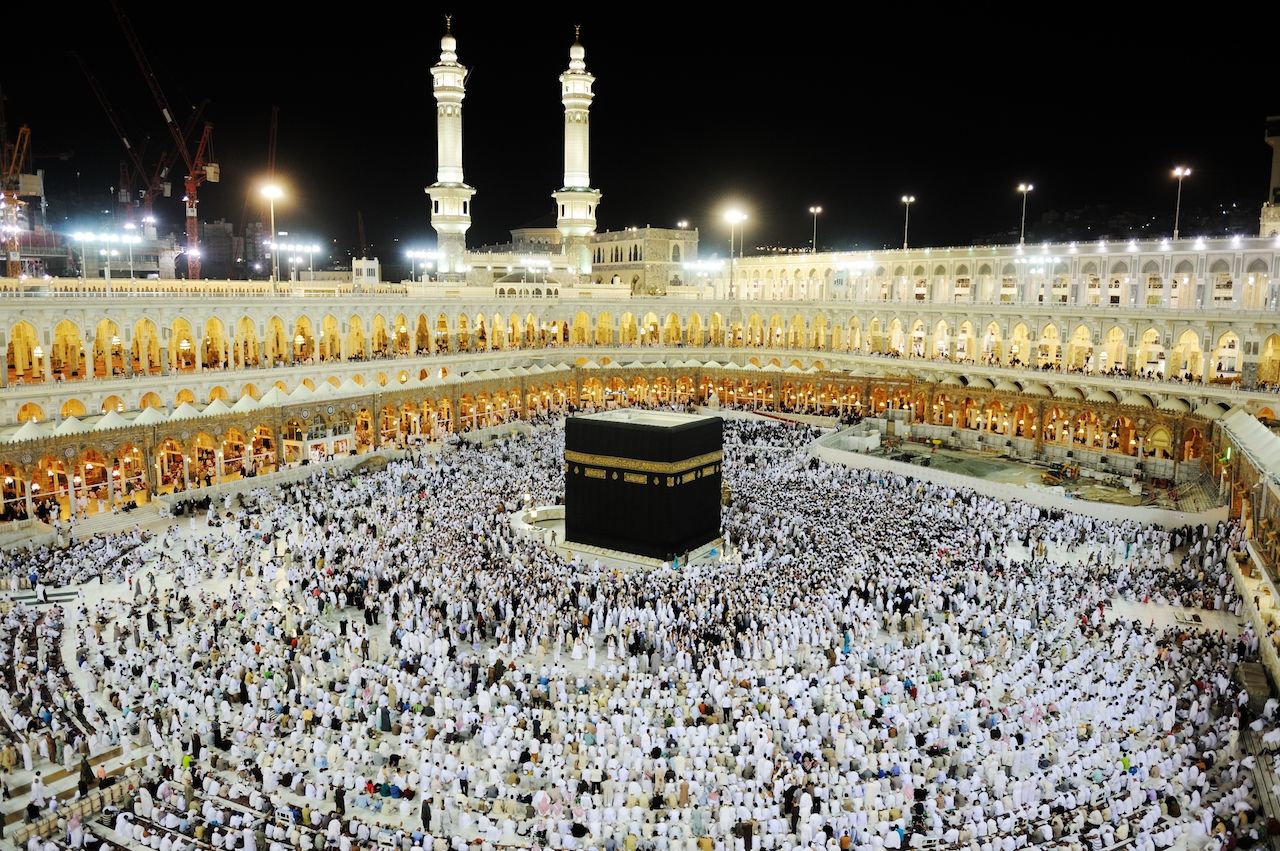 The largest mosque in the world, the Great Mosque of Mecca — also known as Al-Haram Mosque — is the destination of millions of Muslim who are able to fulfill the fifth and final pillar of Islam. Hajj (the Islamic term used to describe the pilgrimage to Mecca) takes place every year, but Muslims are required to go only once in their lifetime. The Al-Haram Mosque is said to be able to accommodate up to three million worshippers in one sitting, and it covers 40 acres. Worshippers pray in the rectangular courtyard at the center of which is the Kaaba, the most sacred shrine in Islam. The Kaaba is a 49-foot tall cube covered by a black silk cloth and decorated with gold-embroidered calligraphy. Embedded in the eastern side of the Kaaba is the Black Stone, which is believed to have been given to Ibrahim by the angel Gabriel and revered by Muslims. Pilgrims at the Al-Haram Mosque hope to kiss and touch the Black Stone. This mosque is always open, but the city of Mecca is strictly forbidden to non-Muslims. 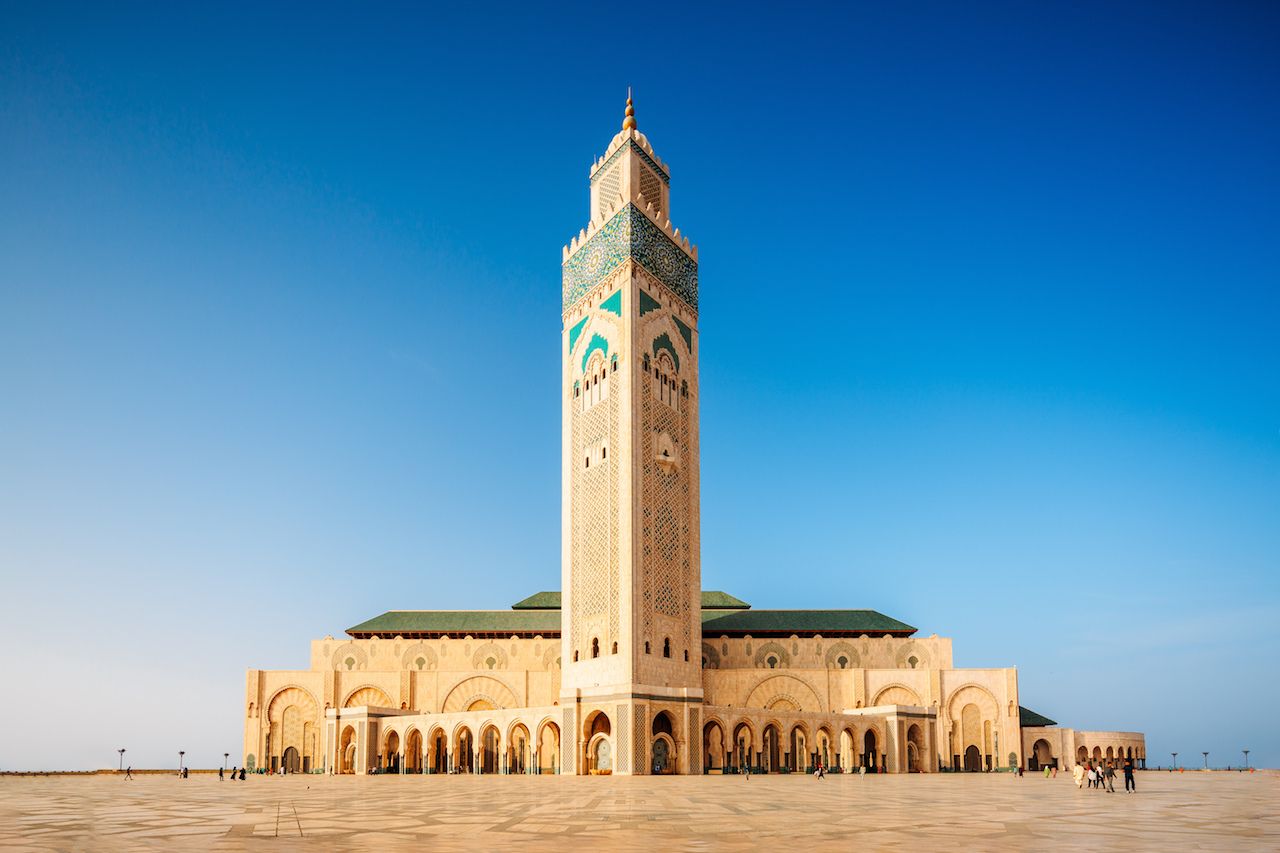 Casablanca’s impressive mosque was commissioned by former King Hassan II and built to face the Atlantic Ocean. It’s so close to the water, in fact, that a glass floor was included in the basement for worshippers to see the waves crashing on the rocks below. The retractable roof (it opens and closes in a few minutes) is covered in 300,000 tiles made of cast aluminum that look just like terracotta tiles. Inside, the place is grandiose with marble travertine floors and carved wooden ceilings. The mosque’s minaret, at 689 feet, is topped by a laser that points towards Mecca. Entering the mosque is only possible through a guided tour with tickets available on the southern side of the mosque. Shorts and uncovered shoulders are not allowed, and shoes need to be removed before entering. 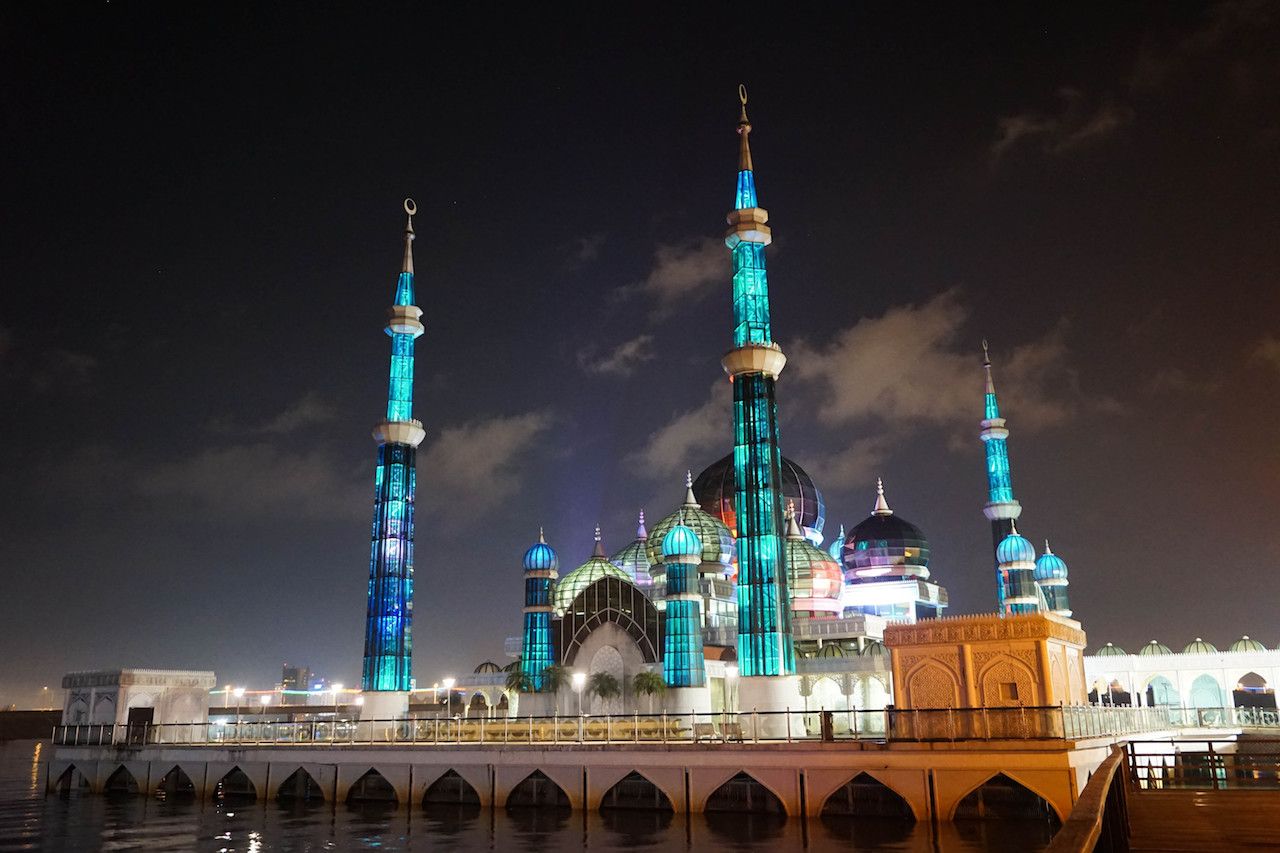 Located on a man-made island in Kuala Terengganu, the Crystal Mosque (built in 2008) is the first “intelligent” mosque, complete with solar panel cells, WiFi connection, and electronic Qurans. The architecture is made of steel and smoke-colored glass, giving the mosque a futuristic, unique appearance. The glass of the domes shines like crystals under the sun, drawing visitors from all over the world for photo shoots. The best time to visit the mosque is in the evening when it’s lit up in different colors. The Crystal Mosque is open to visitors and collects a modest entrance fee. Robes and scarves are provided, and shoes must be removed before entry. 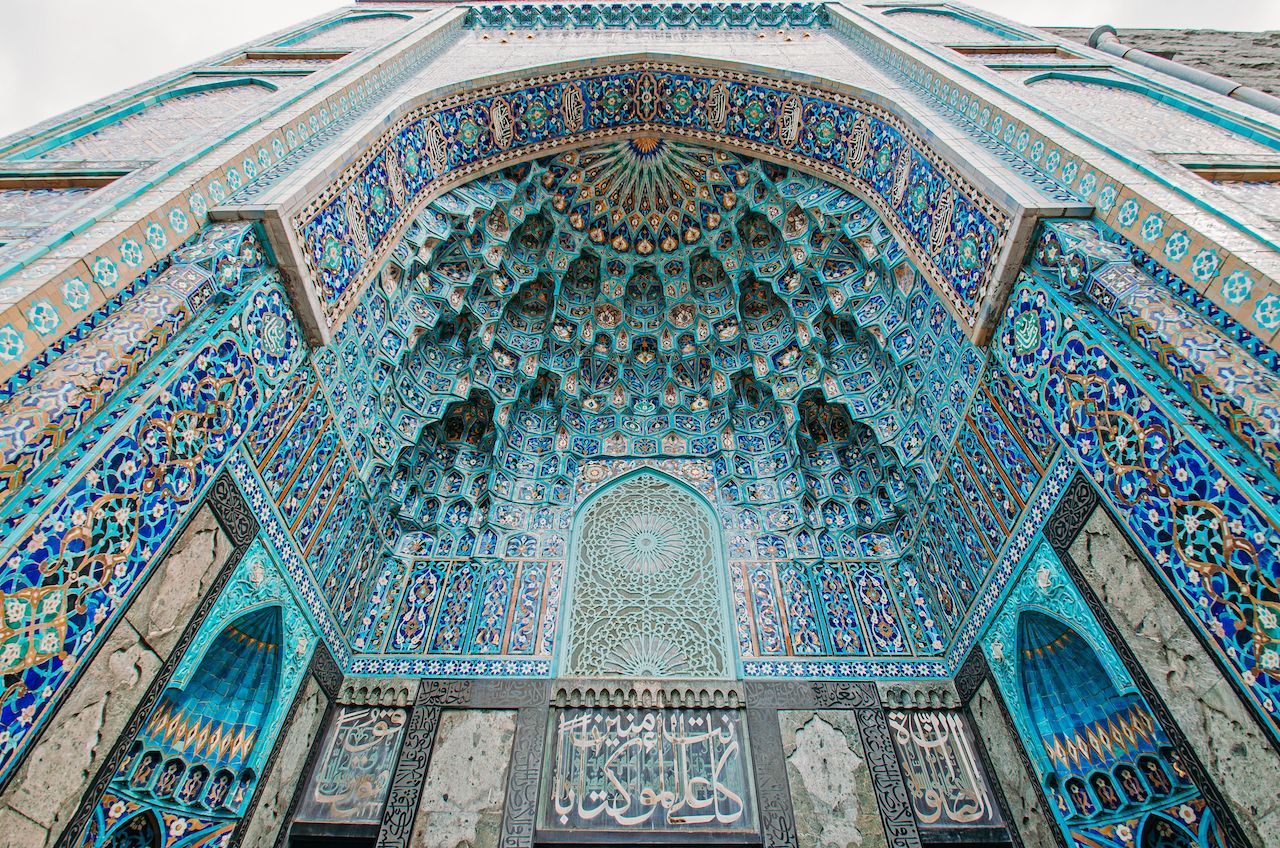 Although Russia is better known for its gorgeous churches, there is one mosque in Saint Petersburg that’s just as amazing as the Church of the Savior on Spilled Blood. The portals of the Saint Petersburg Mosque, as well as its two minarets, are covered with stunning blue mosaic ceramics and mesmerizing geometric patterns. The mosque’s outside walls are decorated with quotes from the Quran. The mosque is only open to non-worshippers during a specific pre-arranged tour offered by the mosque.