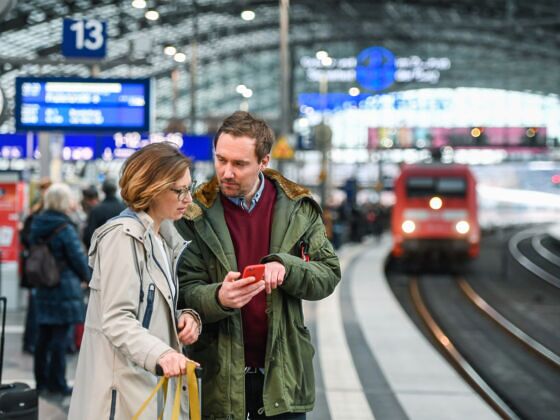 Germany beats like the heart of Europe, at the center of a flowing, intricate web of connections. But this web is built of iron and steel, traversed by a fleet of high-tech trains offering quick, comfortable, and sustainable travel — without breaking the bank. (And without the security lines and baggage limits.)

Whatever your travel taste, Germany’s got it, and Deutsche Bahn can get you there. Using the train-travel primer below, soon you could be hiking the jagged hills of Sächsische Schweiz National Park or tasting wines in the Rhine Valley. You could be plumbing the depths of Berlin’s nightclub scene or exploring the Port of Hamburg, Germany’s “door to the world.” With Deutsche Bahn, you’ve arrived at the door to the world, indeed.

This post is proudly produced in partnership with Deutsche Bahn and the German National Tourist Board.

Munich or Frankfurt to Berlin? Less than four hours. Berlin to Hamburg? Less than two. Cologne to Frankfurt? Around one. Beyond speed, most airports in Germany are connected to ICE trains; Super Saver Fares start at €17.90; and long-distance trains are 100% green. (And once you get off your train, Germany makes it easy to stay sustainable.) If you’re somehow not sold yet, check out where you can go.

Bavarian Route. Here in the land that gave us Oktoberfest, you’ll find everything your inner Günther desires. Fairytale castles — like the famous Neuschwanstein, inspiration of the Disneyland castle — dot the subalpine landscapes around Munich and Nuremberg. Breweries craft 400-year-old recipes. In the summer, hike through mountain valleys to find hidden glacial lakes. In the winter, strap on your skis and hit the slopes.

Rhineland Route. Compacted into a corner of western Germany, the Rhineland is a densely populated expanse of rivers, vineyards, and cities. Here, you get a lot of bang for your traveling buck — travel between major cities like Cologne, Aachen, and Düsseldorf rarely takes longer than an hour. With its Roman history, you’ll want to be sure you visit the Ruins at Trier, Germany’s oldest city and one-time capital of the Roman empire. Also check out the local wine scene, and, of course, cruise the famous river that gives the region its name.

North Coast Route. Bookended by Germany’s two most famous and beautiful islands, Rügen and Sylt, this route will ensure you keep the sea in view at all times. Many of the cities along this route — Lübeck, Kiel, Hamburg, etc. — were members of the historic Hanseatic League; nowadays, you can see the Hansa influence in traditional Brick Gothic architecture exhibited on the region’s cathedrals and town halls. The area is known for its excellent bike trails, made all the more welcoming (and leisurely) by its extremely flat landscape and beautiful sea views.

The Grand Tour. For the completionists among us, it’s possible to visit all of Germany’s major cities by rail in just a few days. Start in the historic Römerberg neighborhood in Frankfurt; an hour away in Cologne, witness the Cologne Cathedral; head to Hamburg’s UNESCO-designated Speicherstadt, the world’s largest warehouse district; two hours later, scope out Berlin’s impressive museums or party the night away (or both). For your last and longest leg, a four-hour ride gets you to Munich, home of Oktoberfest, where you can finally sit down in a traditional biergarten, toasting to your journey. 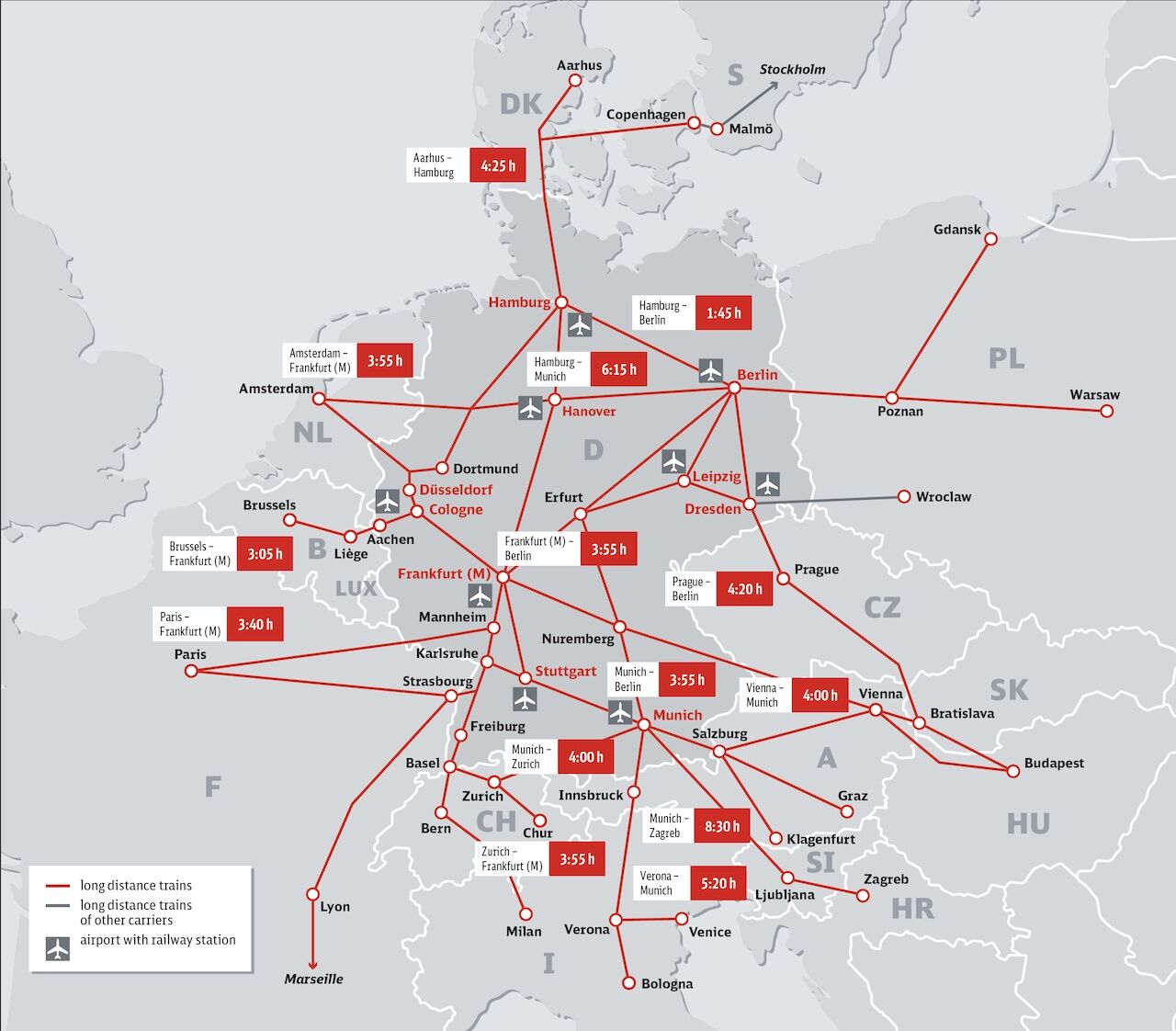 ICE trains Regional travel Buying tickets on-site
Germany’s rail system has set the standard for rail travel across Europe for generations — from investments in solar power to bike-friendly cities, the whole country has rebuilt itself for sustainability and ease of access. Trains are separated into four distinct categories, each serving slightly different purposes but booked identically. When you need your ticket, here’s what to know.

ICE/IC/EC/regional trains. By and large, Germany’s high-speed Intercity-Express (ICE), Intercity (IC), and Eurocity (EC) lines are for longer-distance travel. These trains are generally more advanced, even faster, and a bit more amenity-laden than their regional counterparts, offering first- and second- class tickets, dining cars, and so on.

The ICE Sprinter. This is the pride of German rolling stock, offering more legroom than on planes, free Wi-Fi, plugs for your electronics, on-board catering, “quiet zones,” and more. First-class travelers can travel without worry, since they get seat reservations and meals, drinks, and snacks. But here, the real seller is definitely the speed — on some routes, ICE Sprinter trains reach speeds of 185mph (300 km/h). You’re not wasting any time getting to your destination.

Buy early and online. Buying tickets for Deutsche Bahn can definitely take place at the station, but for better prices, it’s best to book in advance (or to be under 27 years old). If your trip is starting or ending in Germany, the easiest way to get tickets is to book online, either at the Deutsche Bahn website or using the DB Navigator app on your mobile phone. Those traveling internationally may also find Rail Europe useful in their own trip-planning.

Get a Eurail Pass. The ultimate choice for a flexible European vacation, the Eurail Pass allows you to travel in 33 countries for a set number of days based on the ticket you buy. Most trains don’t require you to make a reservation either — you can use your Eurail Pass whenever you want. For convenience, a mobile phone pass is also available and, if you lose your phone, it’s simple to get a replacement pass so your vacation won’t be stalled.

THE PERKS OF TRAIN TRAVEL

Flexibility Sustainability On-board services
In Germany, trains are the most modern and sustainable way to travel this side of the humble bicycle (a good option once you get off the platform!). In terms of speed, sustainability, comfort, and affordability all rolled into one, there’s no competition.

Speed. For most single-country journeys — especially in or around Germany — train travel is often equivalent or faster than flying. When you factor in showing up at the airport early, checking baggage, going through security, the flight itself, time at baggage claim, and customs lines, train travel can look downright speedy by comparison.

Sustainability. Trains today are far removed from the coal-burning steam engines of the nineteenth century. Today, all of Deutsche Bahn’s ICE, IC, and EC trains within Germany are powered by 100% renewable power, mostly from wind, solar, and hydroelectric sources. And as part of its ambitious climate goals, DB aims to be totally climate-neutral by 2040. Many of the local city-rail networks DB operates across Germany run entirely on renewable energy as well.

Comfort. Prefer to overpack? Trains let you bring as much baggage as you can carry. Like to spread out while you’re traveling? Trains offer more space than planes or buses. Picky eater? Just bring your own food and drinks on the train with you. Desperately need Wi-Fi? Long-distance ICE trains have free, unlimited Wi-Fi, and many train stations offer free Wi-Fi for an hour.

Train travel is also far quieter and smoother than traveling by bus or plane, making it that much easier for you to close your eyes, stretch out your legs, and get some much-needed shuteye. And, yes, there is air-conditioning, so you can enjoy that mid-summer travel. To sum up: Until they get around to inventing flying massage tables, trains have got to be the most comfortable way to do long-distance travel.

Affordability. While the price of oil (and therefore airfare) rises, train operators in Germany and beyond are working to reduce the costs of train travel. Deutsche Bahn now offers Saver Fares and Super Saver Fares that offer prices competitive with or cheaper than the equivalent journey’s airfare. Saver Fares include local transport at departure and destination cities, cancellation for a fee, and free travel for anyone under 15 years old who’s traveling with an adult. Super Saver Fares offer an even cheaper base rate for those comfy with no cancellation option — available from as little as €17.90 for long-distance services within Germany.

Better service More space Bring all your luggage
There are definitely perks that make train travel a smoother experience than going by plane and more relaxing than going by car — as long as you’re prepared and keep just a few things in mind.

Bring your ID. As we touched on above, luggage is no problem, so feel free to pack as much as you can comfortably carry. There are some essentials, though: tourists need to carry an ID recognized by Germany on their person at all times. Note: American drivers’ licenses do not count as legal ID in Germany.

Keep your essentials portable. For greater peace of mind, it’s a good idea to bring a small bag for your essential documents, money, and valuable items like jewelry or phones. That way you can easily bring it with you on your way to the bathroom or dining car.

Bring something to keep busy. While essential info is available on your ICE ride in English, onboard entertainment comes in German — you might want to load a tablet or other device with some movies and TV shows unless you speak Deutsch. Books, games, or a journal are also classic train companions, but to tell you the truth, there’s something magical about putting your headphones on and just gazing out the window at the passing landscape.

This post is proudly produced in partnership with Deutsche Bahn and the German National Tourist Board.