In 2021, architects from around the world have found ways to innovate and inspire by expanding the limits of what it means to design buildings. From grandiose, futuristic-looking projects meant to reshape skylines to high-tech housing created with sustainability in mind and glass igloos created in the heart of a UNESCO World Heritage Site, the best architecture of 2021 spans far and wide, both geographically and conceptually.

Here are 15 of the coolest structures completed in 2021 — a selection of projects that aim to become landmarks by creating spaces that are aesthetically intriguing, functional, and responsive to their history and surroundings. 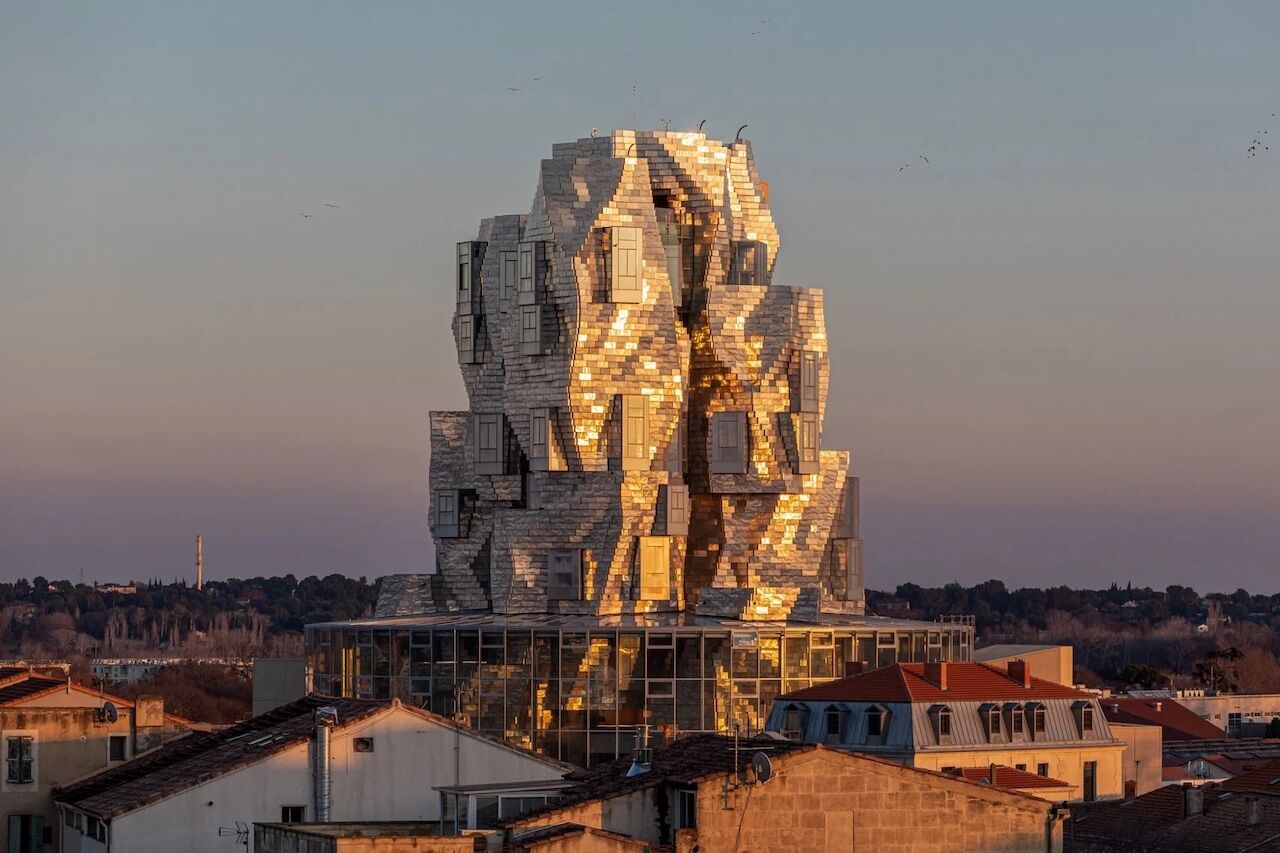 Gehry Partners’ latest project rises from the heart of the historical city of Arles with a shiny, multifaceted exterior that stands in contrast with the medieval buildings that make the city famous. The 183-foot-tall tower, clad with 11,000 stainless steel panels that form an asymmetrical shape, emerges from a circular base which will host seminars, art exhibitions, and workshops in the coming year.

During the design process of the Luma Arles Cultural Centre, Frank Gehry was inspired by the rocky peaks of the Alpilles mountain range in Provence and Vincent van Gogh’s art. “The stainless steel bricks […] capture and render all the color variations in the sky, and give the building an ever-changing appearance. This aesthetic choice is a nod to the pictorial practice of Vincent van Gogh, who was constantly capturing the shades of the Provençal sky on his canvases during his time in Arles,” the Luma Arles website explains. The cylindrical base pays tribute to the Roman amphitheater dating back to 90 AD which marks the center of Arles.

On September 29 and 30, 1941, more than 33,000 Jewish people were murdered in Babyn Yar, near Kyiv, by Nazi troops. In the years following the event, German troops occupied the area killing an additional 100,000 people. After the war, the site became a landfill with fews signs carrying forward the memory of the tragedy and of those who had lost their lives.

In an attempt to acknowledge the past, the Ukrainian government has planned the building of a memorial to commemorate the victims. The first stage of the project was completed in May 2021 by Swiss firm Manuel Herz Architects: a 36-foot-tall wooden modular synagogue shaped like a book and decorated in traditional patterns reminiscent of the ancient synagogues that stood in Western Ukraine in the 17th and 18th centuries. 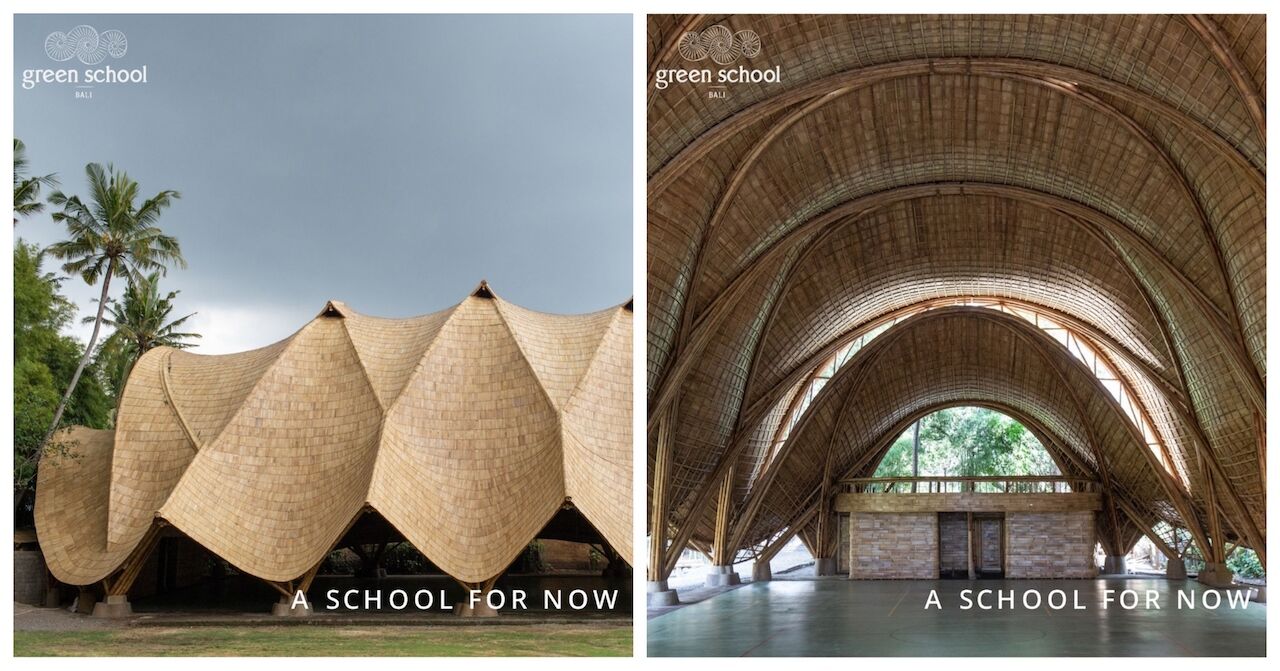 The latest addition to Bali’s Green School, an educational institution founded in 2006, is The Arc, a gymnasium expanding the campus, designed by Elora Hardy’s architecture firm IBUKU. The building is composed of a series of bamboo arches that reach 46 feet in height and intersect in a way that allows the structure to stand thanks to natural tension. As Jörg Stamm, the carpentry specialist who supported IBUKU in the construction process, explains “The Arc operates like the ribs of a mammal’s chest, stabilized by tensile membranes analogous to tendons and muscles between ribs.” To learn more about the concept creation and construction of The Arc, check out this video. The Arc won the 2021 Architecture MasterPrize. 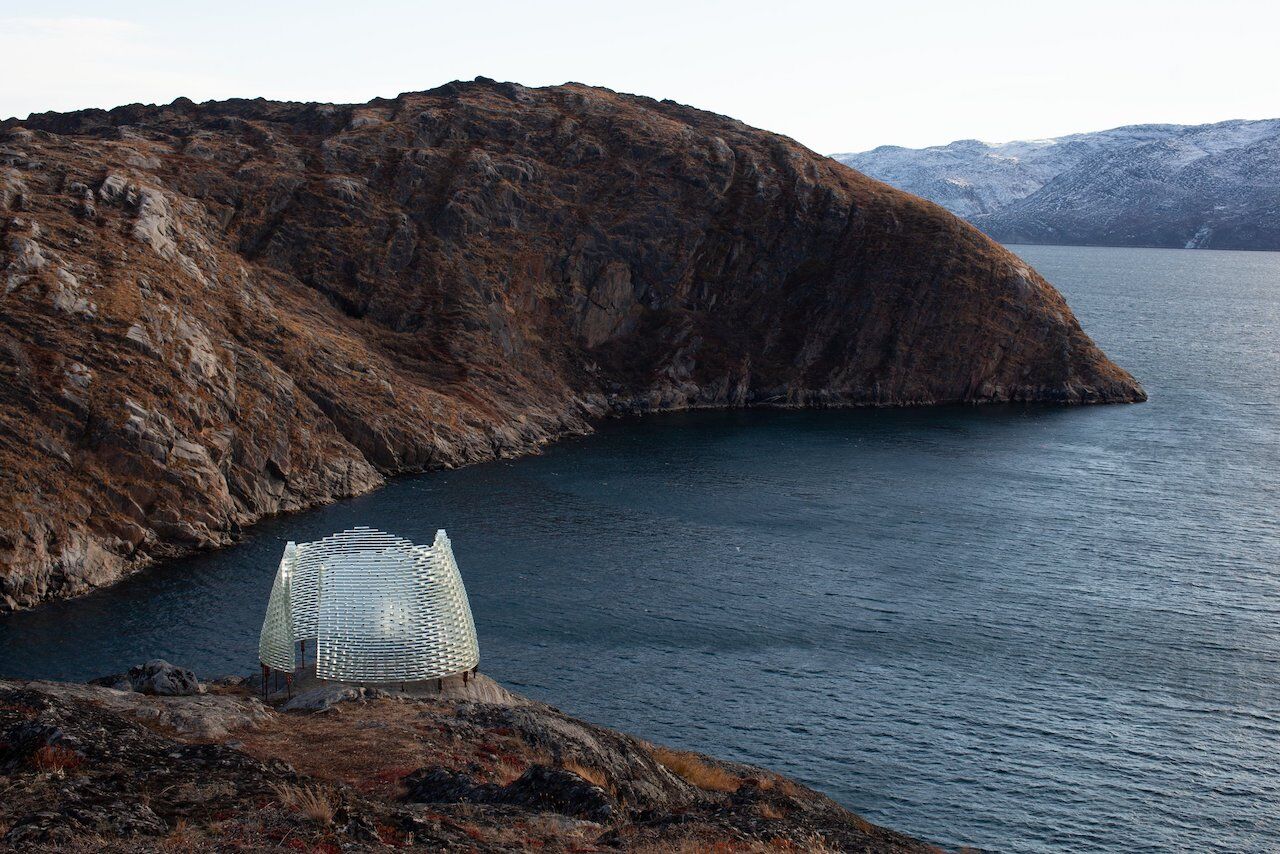 Located on an isolated hill near the Arctic village of Sarfannguit — a community of just 100 people — the Qaammat Pavilion designed by Swedish-Greek architect Konstantin Ikonomidis blurs the lines between art and architecture to celebrate the connection between Inuit people and the environment.

Built with transparent bricks of Italian glass, the pavilion made of two curved walls standing in front of each other was commissioned by UNESCO. The region of Aasivissuit – Nipisat where the glass igloo was built was added to the World Heritage list in 2018 because of its cultural importance for the indigenous communities that have lived there for over 4,000 years. 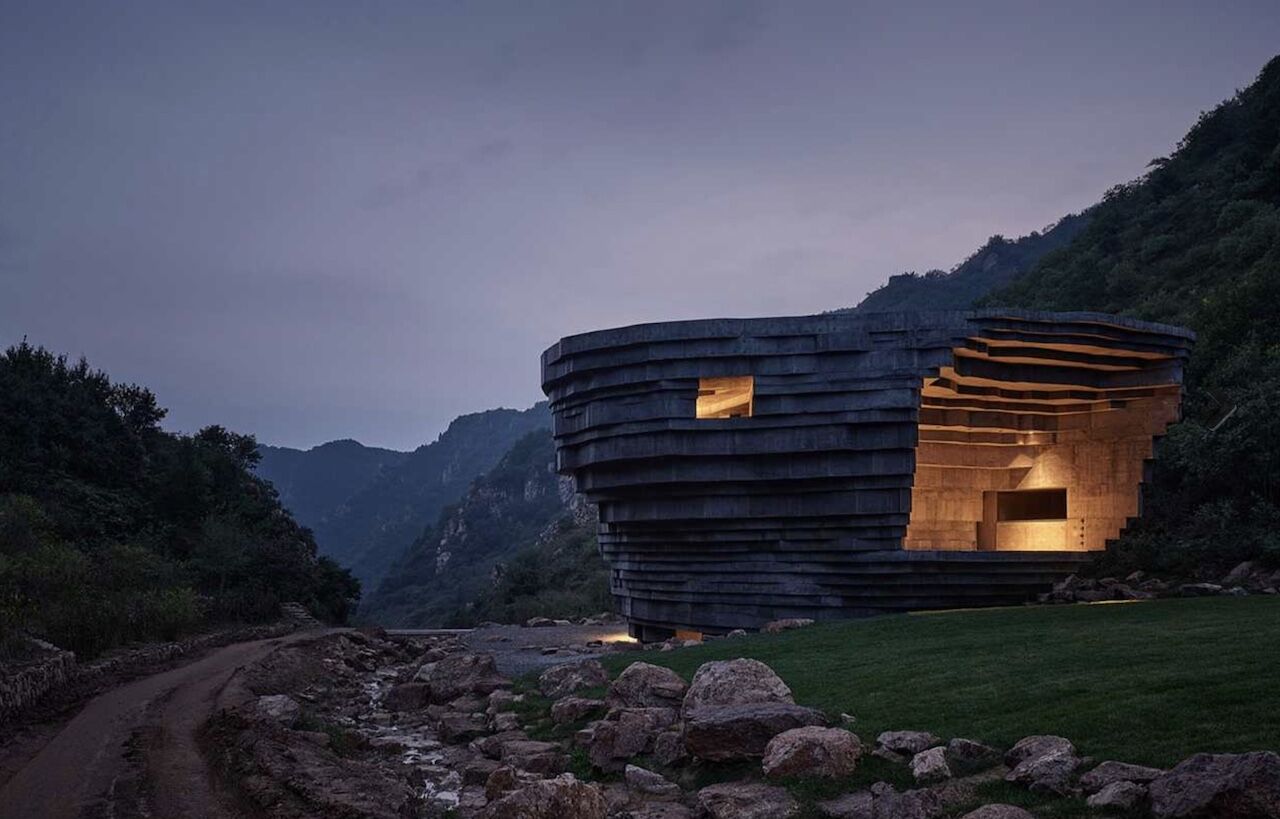 Inspired by its surroundings, the concrete concert hall created by Open Architecture in a valley north of Beijing, blends in with the landscape. The rough, irregular structure encloses a peaceful, open-air concert space that fills with natural light thanks to large windows that open on the lush greenery of the Hebei Province.

The cave-like structure mimics the rocky formations found in the area, but its interiors have been designed through software for the optimal sound experience. Even when concerts are not played, the Chapel of Sound lets visitors enjoy the symphony of nature from its accessible rooftop. 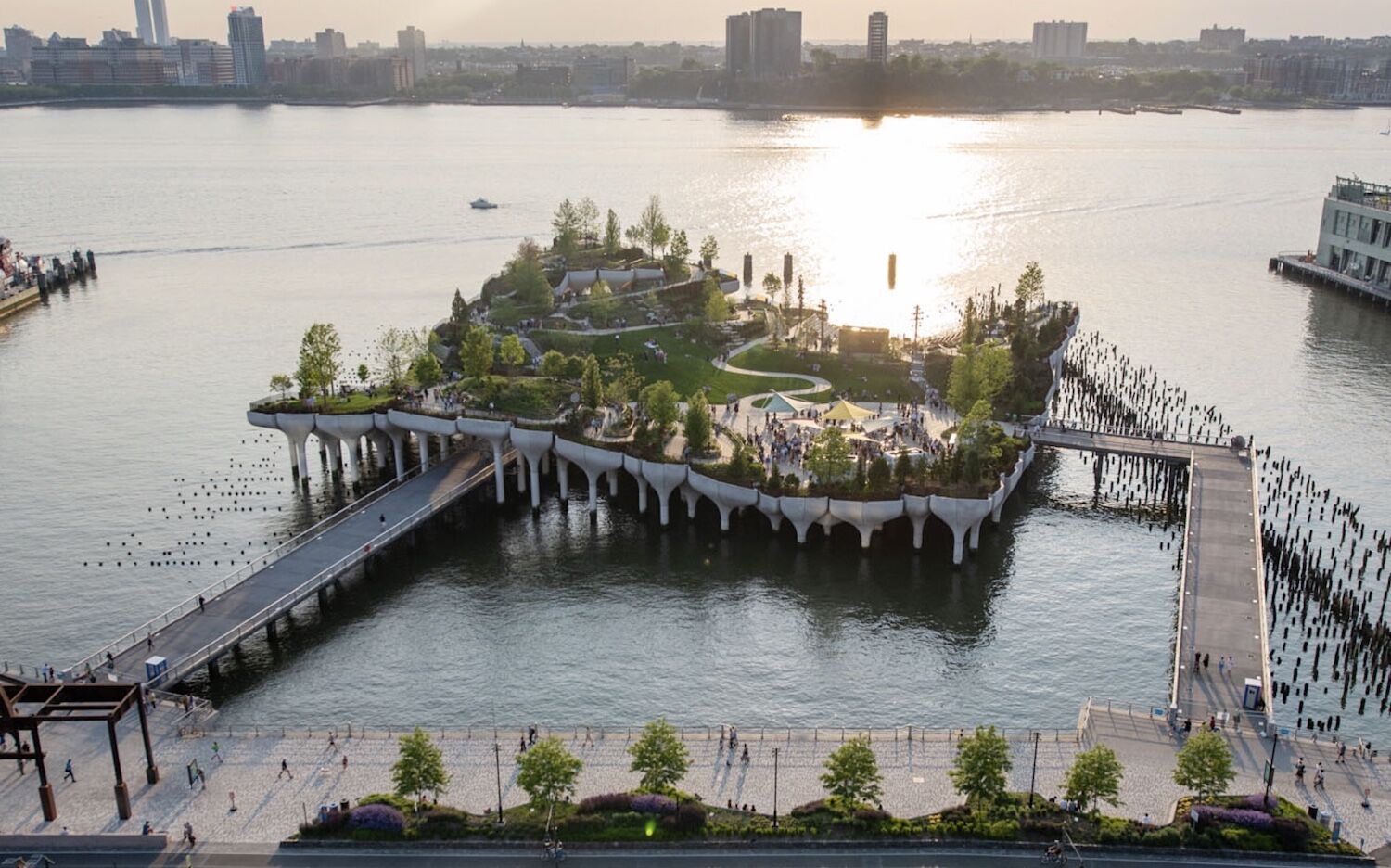 After eight years of work, British firm Heatherwick Studio has completed the Little Island project on the Hudson River. Extending from Lower Manhattan, the square-shaped island is a space for entertainment and relaxation: covered with over one hundred different species of native plants, the pier built on 280 individual concrete piles features three performance venues of different sizes connected by walkways, the largest of which can host 3,500 people.

In creating this oasis in the city, Heatherwick has drawn inspiration from the old Manhattan piers where boats used to dock, reinventing the structural piles that held the platforms above water. By transforming the piles into design objects, the studio managed to maintain the area’s original identity, safeguarding biodiversity within a contemporary vision. 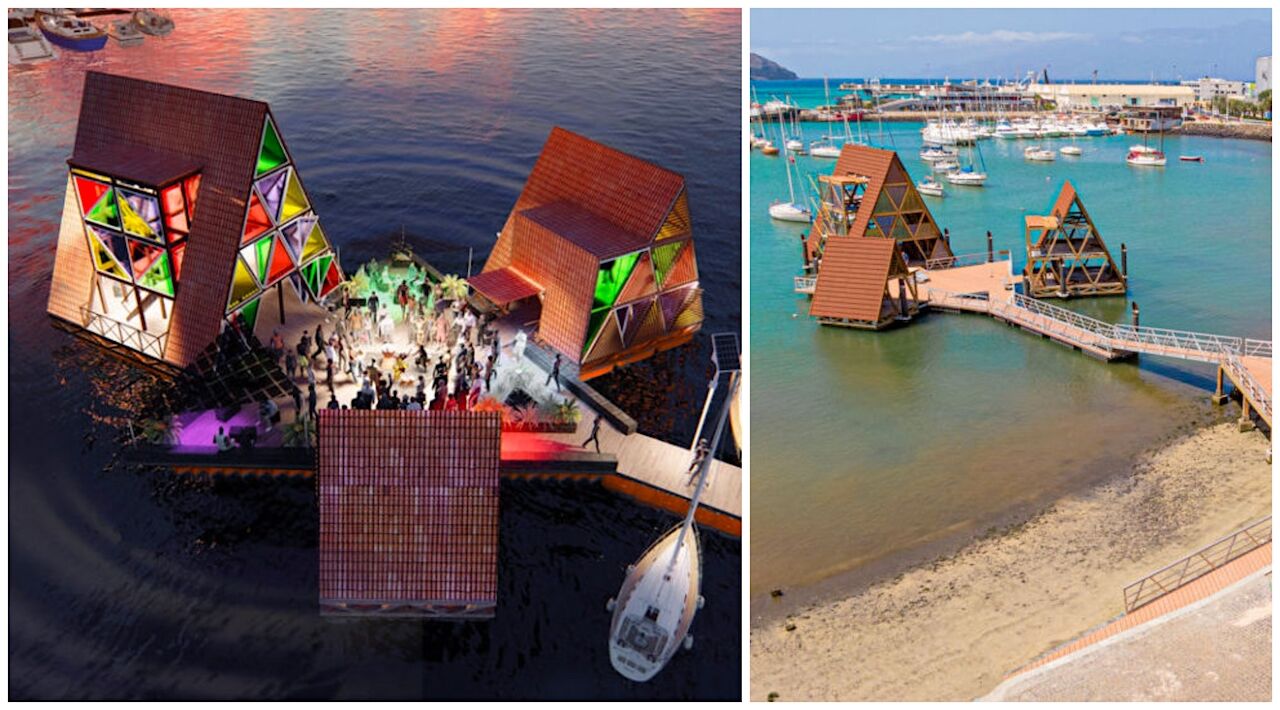 Run by Nigerian architect Kunlé Adeyemi, Amsterdam-based NLÉ studio has recently inaugurated São Vicente’s Floating Music Hub, a one-of-a-kind performing arts center, restaurant and recording studio in Cape Verde. Composed of three triangular pavilions that float on the ocean, the structure is built in sustainable timber and aims to celebrate the long history of musical tradition of Cape Verde by offering a space for local and international artists to produce and perform their work.

8. The Cloudscape of Haikou — Haikou, China 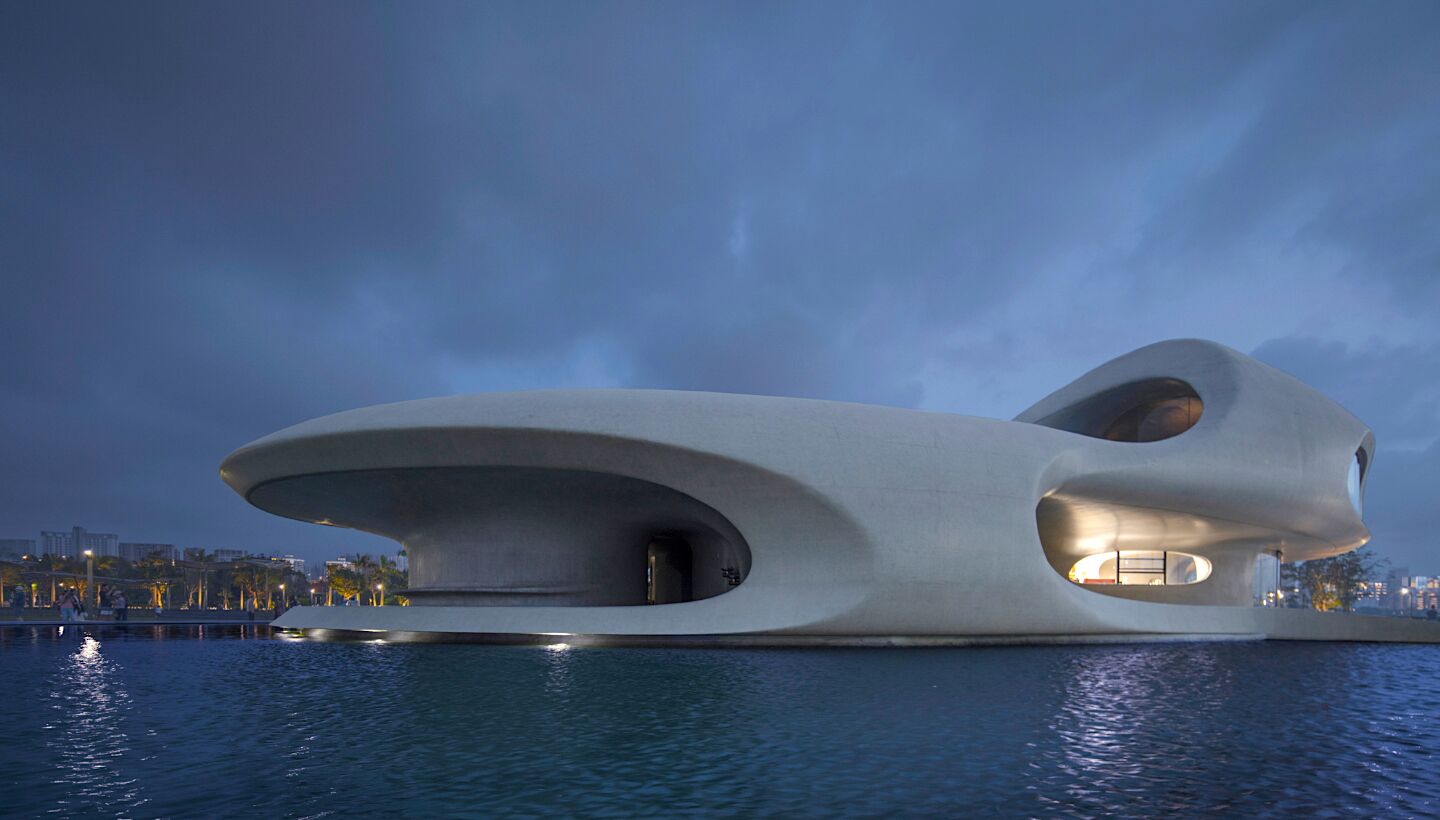 For centuries, because of its geographical position on the shores of the South China Sea, Haikou has been an important center for the exchange of goods and ideas traveling across land and maritime ways. MAD’s Cloudscape of Haikou, a curvy concrete library, carries forward this tradition through a structure that appears shaped by the ocean winds it is exposed to.

The Cloudscape is the first of sixteen pavilions designed by renown international architects that will be erected along Haikou’s coast to revitalize the area. MAD’s project will host a bookshop whose shelves will stretch into circular rooms reminiscent of animals’ lair, with a reading room facing directly onto the ocean. 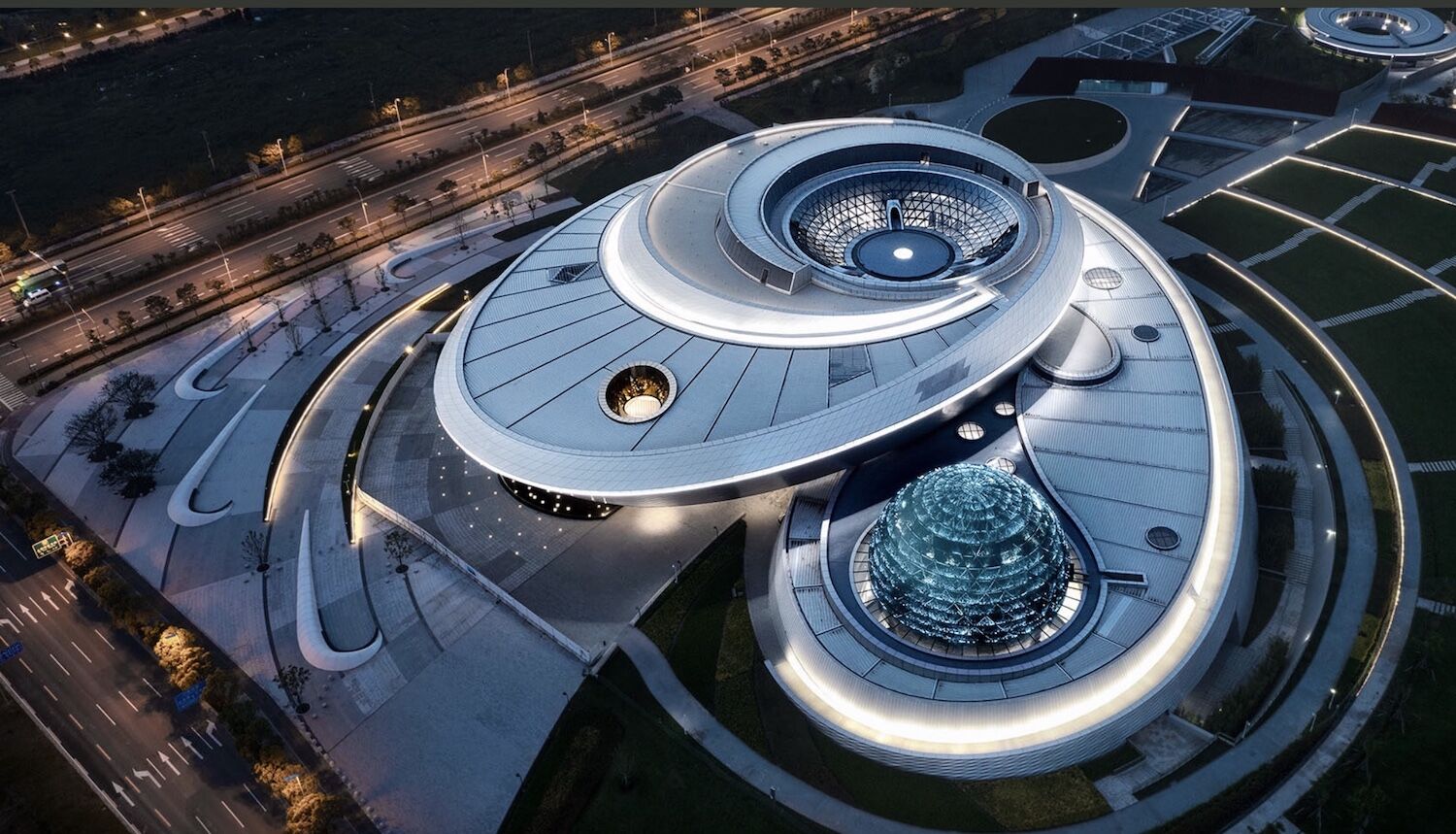 Perhaps the most futuristic building of our best architecture of 2021 collection, the new, spaceship-like Astronomy Museum of Shanghai is the largest of its kind in the world. Designed by New York City-based architectural firm Ennead, the museum covers an area of 420,000 square feet and has no straight walls or corners. Three circular structures, mimicking orbital motion, the Oculus, the Inverted Dome and the Sphere, house the entry of the museum, a sky and star viewing point, and the planetarium theater, respectively. There is also a 78-foot solar telescope on the grounds of the museum. 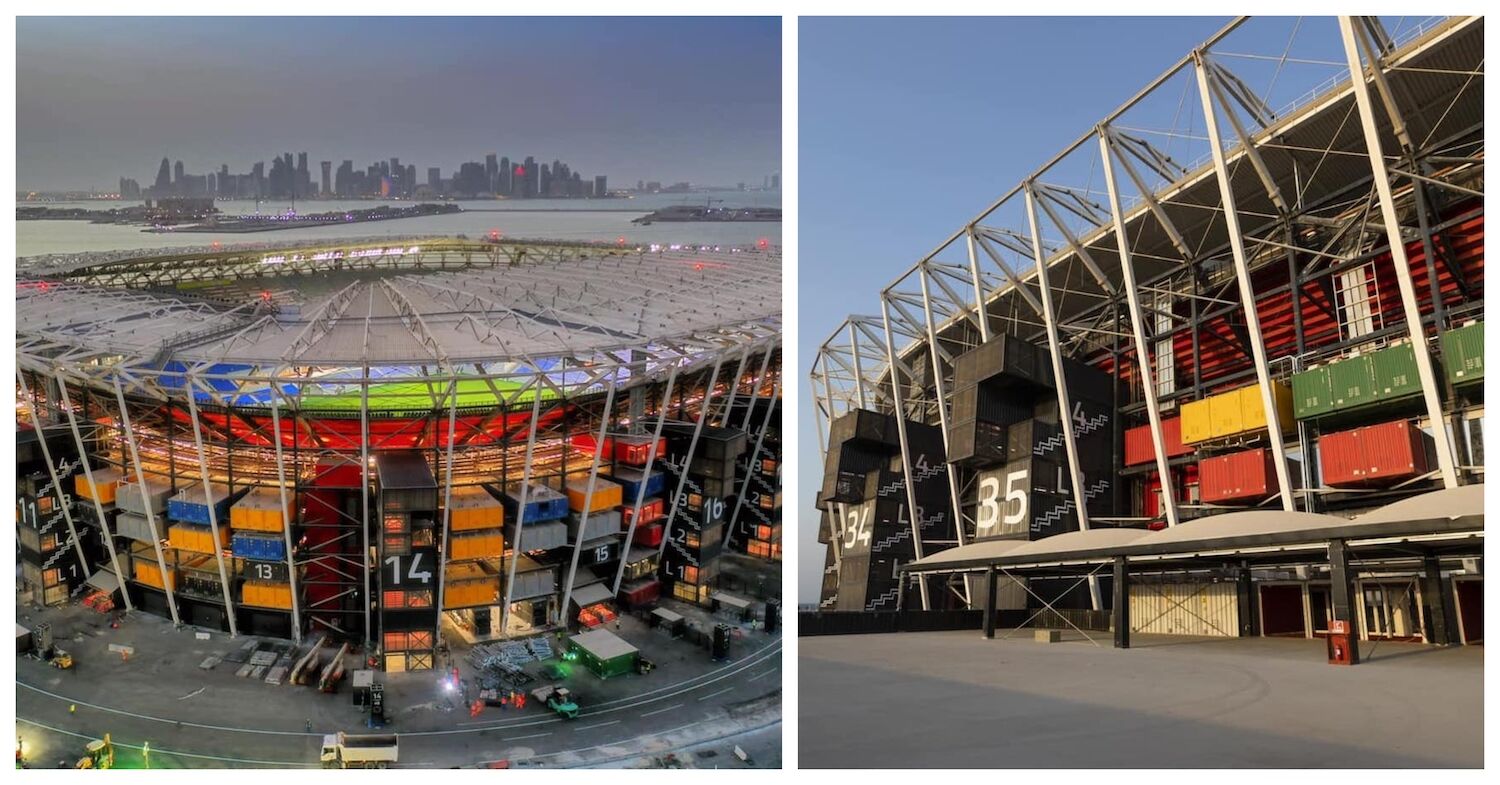 The 40,000-seat Stadium 974 has replaced the former Ras Abu Aboud Stadium in Doha in preparation of the 2022 FIFA World Cup. Major international sporting events often involve the rapid construction of infrastructure by host countries, which is later left abandoned or only partially used for lack of need or resources. Spanish studio Fenwick Iribarren Architects has attempted to solve the problem by building the first stadium made of repurposed shipping containers and partially recycled steel.

Thanks to its modular design, it will be possible to dismantle and reassemble the colorful Stadium 974, either to move the structure elsewhere or to reduce its size for smaller events after the World Cup is over. Fun fact: 974 is both the international dialing code for Qatar and the number of shipping containers used in the construction of the stadium. 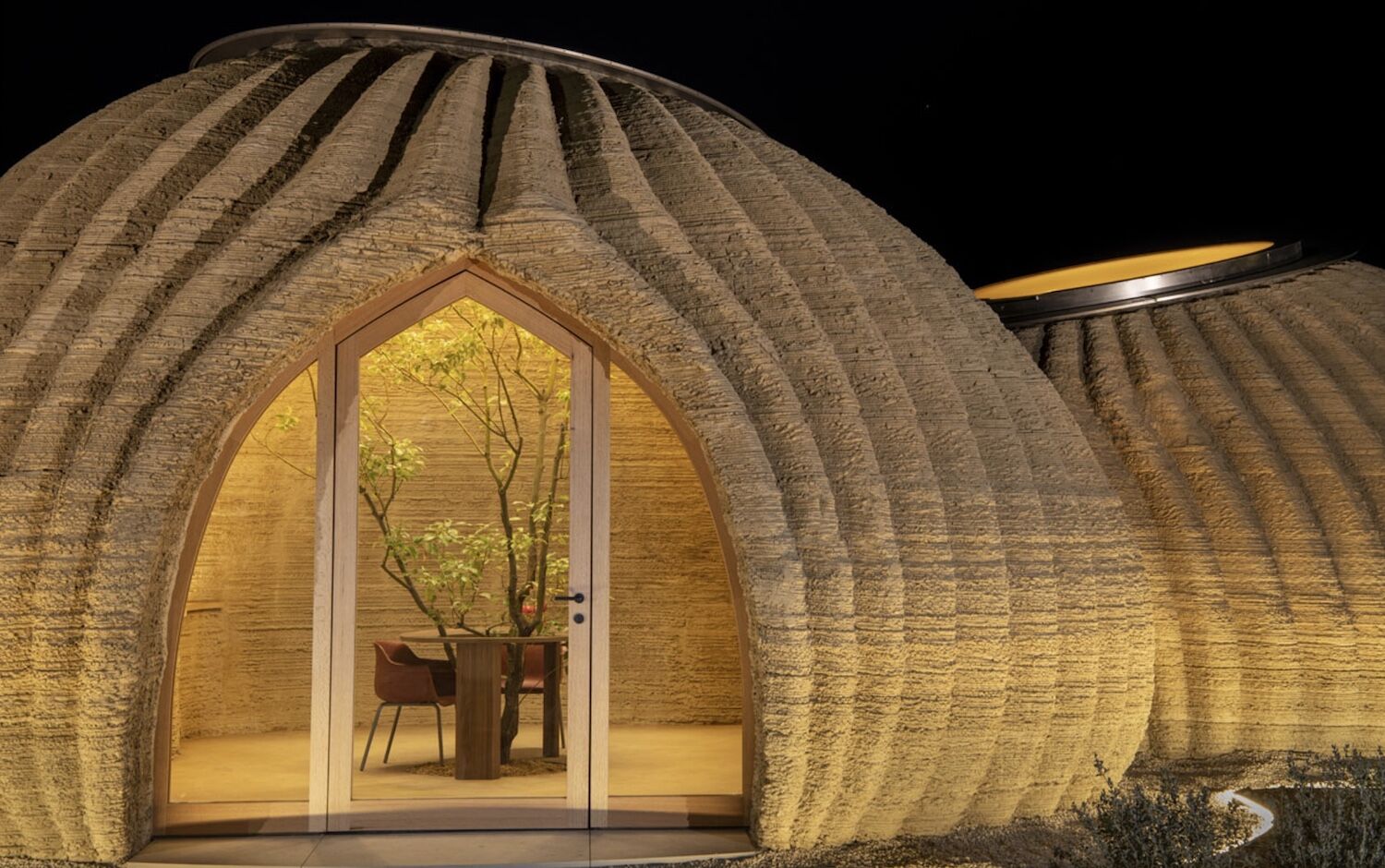 Earlier this year, Mario Cucinella Architects unveiled the first 3D printed house made entirely from raw and locally sourced clay. Presented in Glasgow at COP26 as an example of an accessible and sustainable housing model, TECLA — a combination of the words “technology” and “clay” — was developed as a low-carbon structure by the School of Sustainability founded by Mario Cucinella in conjunction with 3D printing technology WASP.

Looking like an ancient desert dwelling, the 8-shaped house is composed of two domes that connect, forming the spaces for a bedroom and a kitchen and living area, with plenty of natural light entering from the oculus on the top of the structure. Much of the furniture found inside the house was also 3D printed from local materials. A whole TECLA house can be produced in under 200 hours. 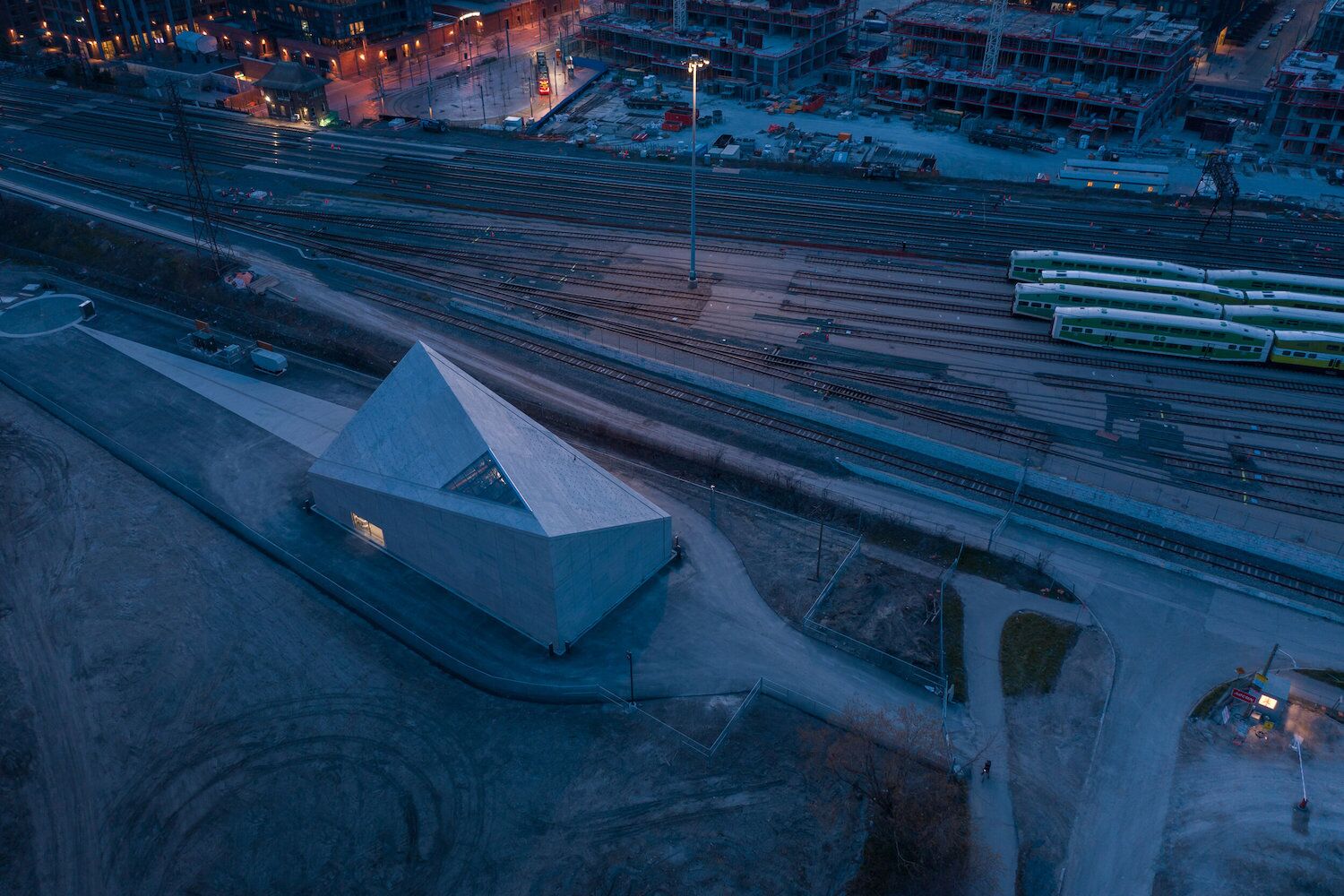 Who says that civic infrastructure buildings can’t be beautiful? Canadian firm gh3 was commissioned a state-of-the-art stormwater treatment facility in the outskirts of Toronto and delivered a minimalistic, geometrical structure set to become a landmark in the city. Located on the northeast corner of Lake Shore Boulevard and Cherry Street, the concrete monolith covers the latest technology for the cleaning of urban waters under an aesthetically pleasing design meant to highlight Toronto’s commitment to sustainable innovation. 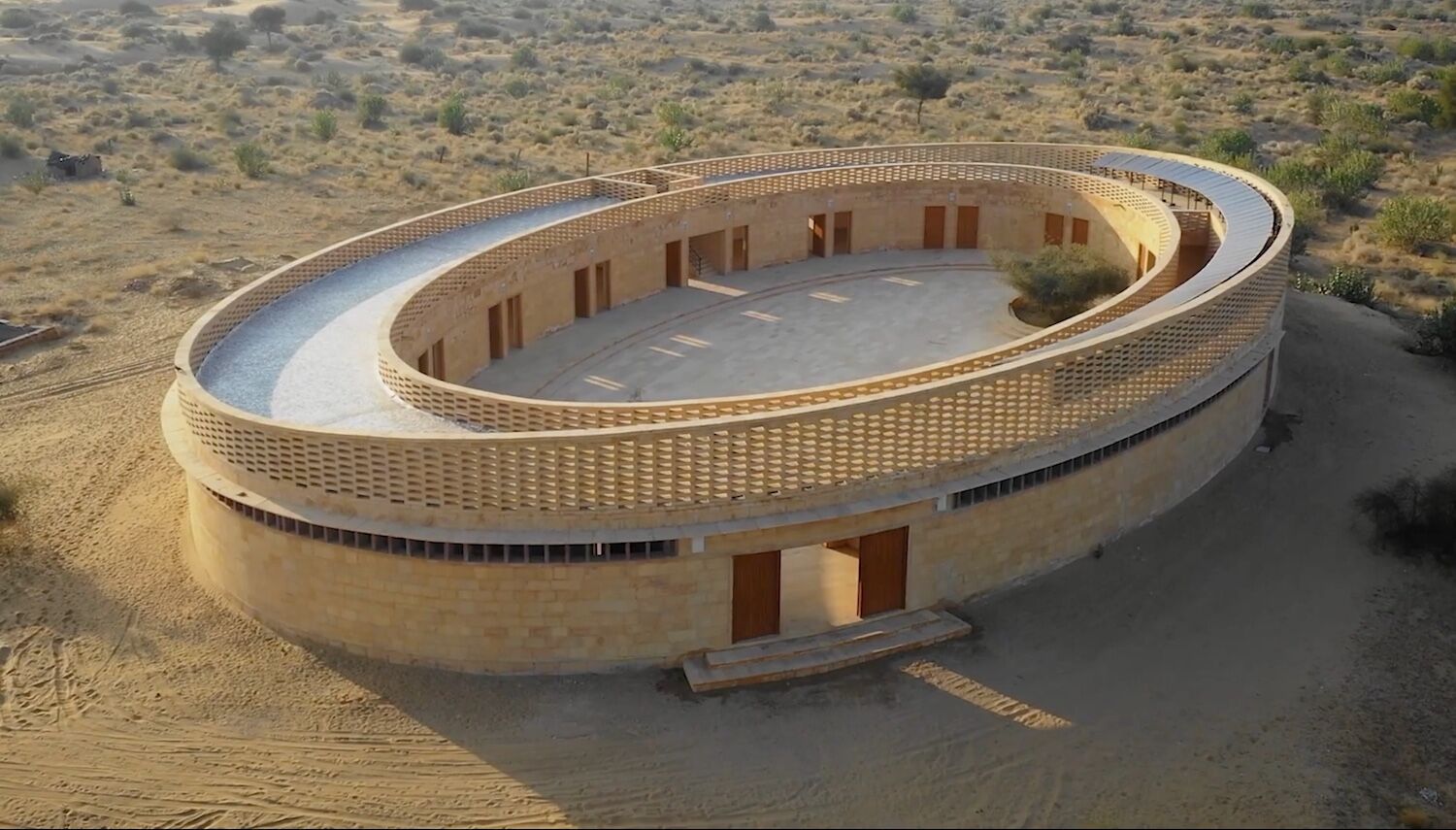 New York-based Diana Kellog Architects have designed the oval-shaped Rajkumari Ratnavati Girl’s School under the supervision of CITTA, the non-profit organization responsible for the development of social infrastructure in some of the world’s most economically challenged regions. Offering educational space to over 400 girls of the remote community of Salkha, in Rajasthan’s arid desert, where female literacy rates are still extremely low.

Built in local sandstone and hand-carved by Rajasthani artisans, the school has solar panels installed on its canopy, allowing for the reduction of carbon emissions. 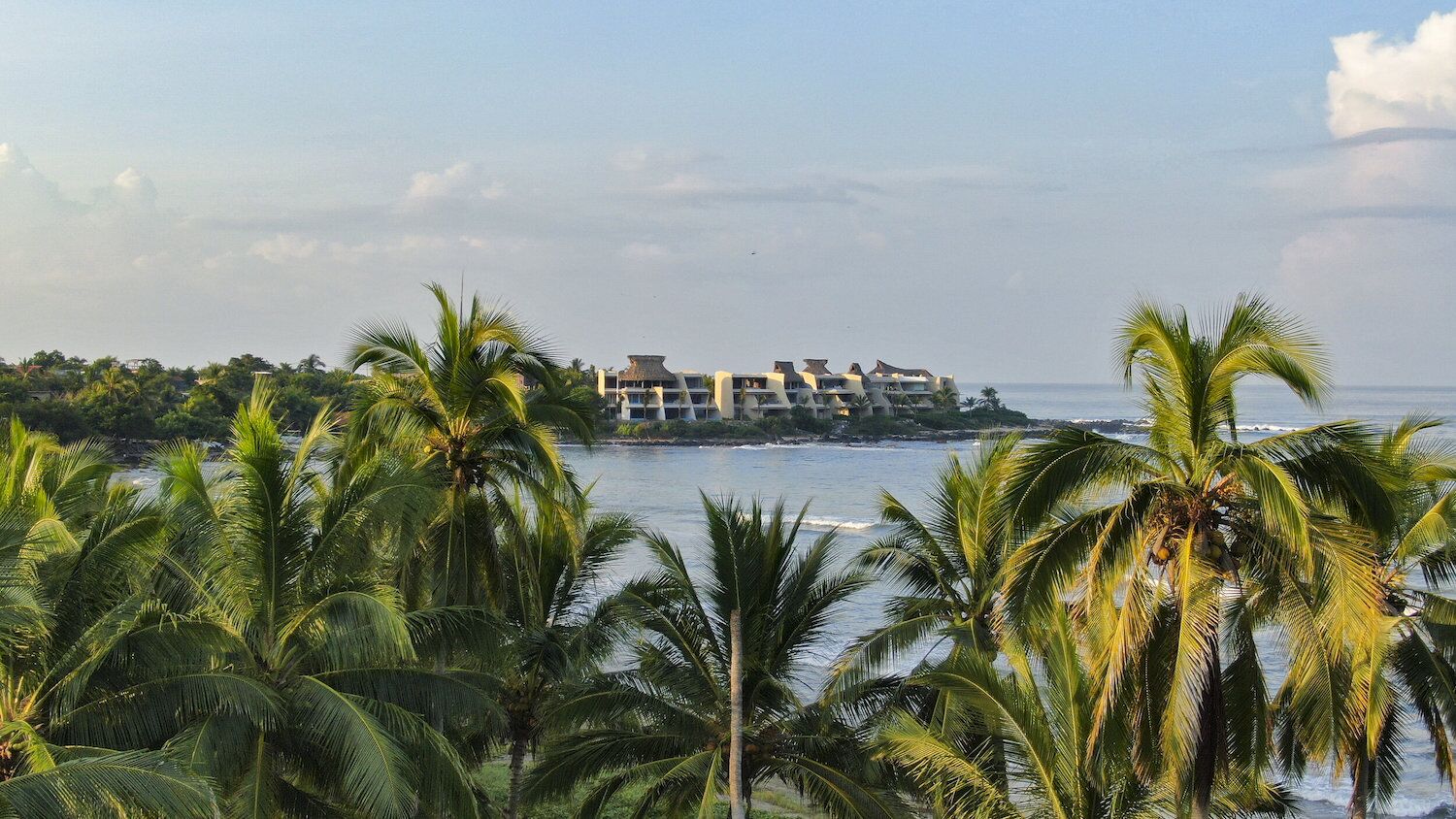 Natural colors blend with the fluid forms of this residential complex designed by Zozaya Arquitectos in the state of Guerrero in south-western Mexico. The 39 luxurious apartments facing the Pacific Ocean are housed in six buildings that integrate seamlessly with the landscape thanks to the use of local materials such as bamboo, palm branches, and river stones. 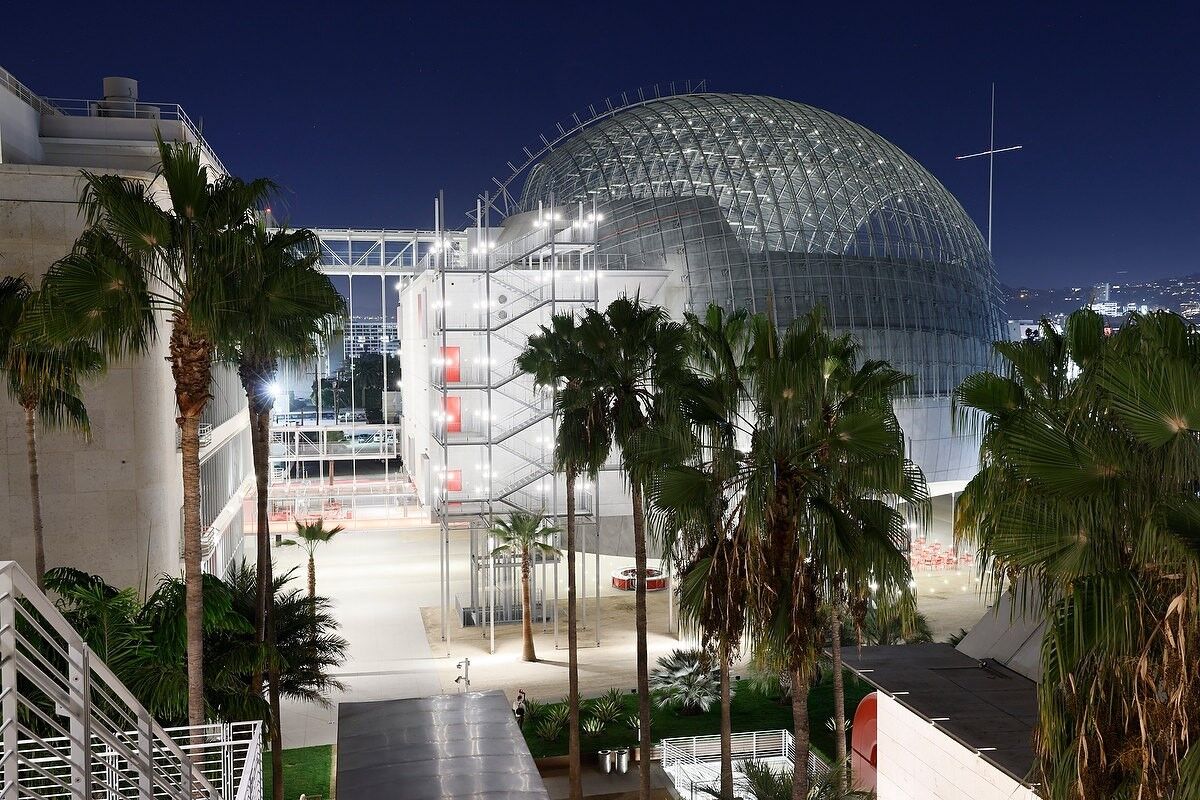 The new Academy Museum of Motion Pictures designed by Italian architect Renzo Piano is housed inside the renovated Seban Building, built in 1939. While many of the original architectural features were maintained, the expansion of the Seban Building involved the construction of a massive spherical structure which now houses the 1,000-seat David Geffen Theater.

The addition of the steel, glass, and concrete sphere creates a continuity between the history of the City of Angels and its future, offering a space to learn about the craft of filmmaking and look forward to the technological innovations that are changing the industry. With 50,000-square-feet of exhibition space — including an education studio named after Shirley Temple — and a rich calendar of events, there will be no shortage of inspiration.