There is something truly magical about seeing holiday lights. Around the world, the arrival of the season is announced in towns and cities by the use of light, and wow, do some places go all out. Spectacular holiday light displays in gardens, on the seafront, and on tree-clad streets pull in crowds and have become a central event in winter vacations. From the gingerbread-style houses adorned with bulbs in France to the 3D light projections on the world-famous Monte Carlo casino, here are the best Christmas light displays around the world.

Editor’s note: Due to COVID-19 restrictions, many of the festivals listed here have either been scaled down or canceled for 2021. Check the listing’s homepage for more information. 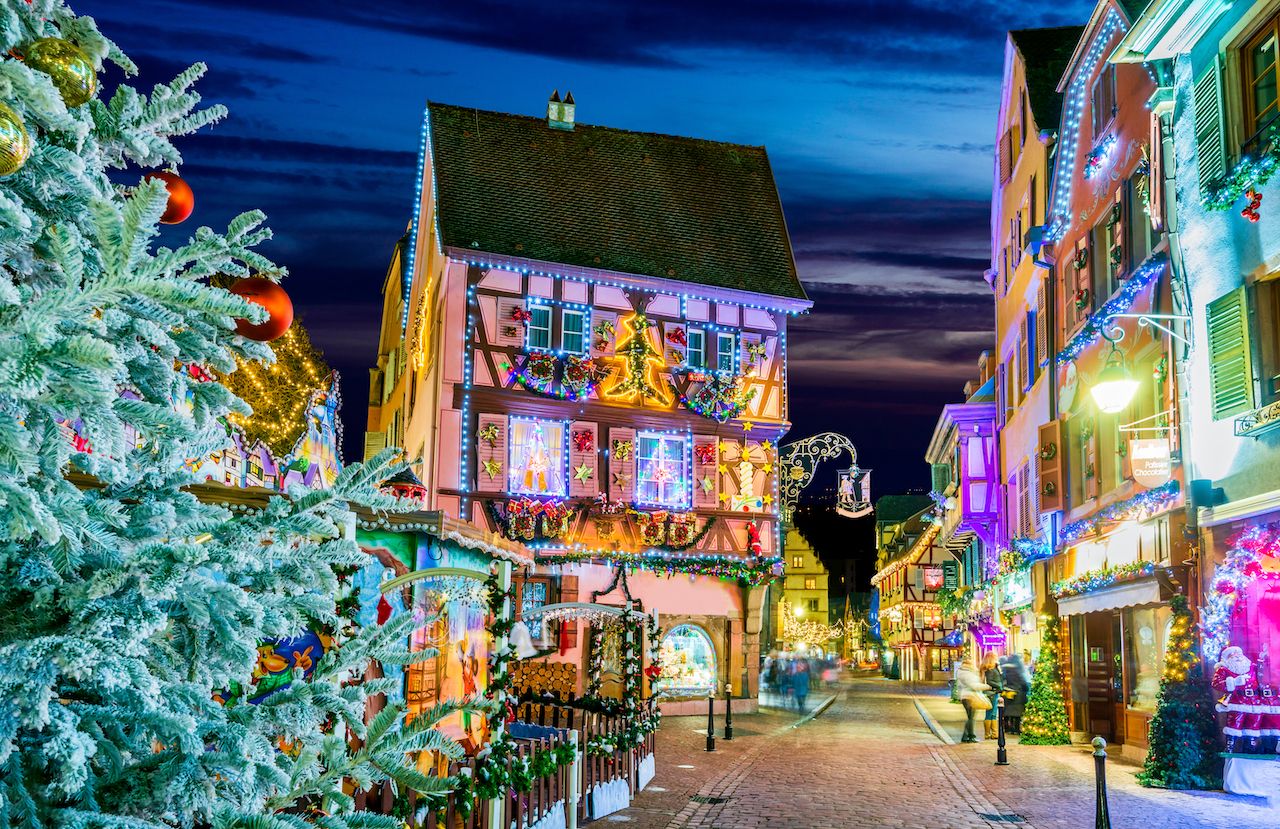 Colmar’s Christmas market is consistently named one of the best Christmas markets in Europe, and that’s not surprising considering the city looks like a Hallmark Christmas movie all year round. Lights connect five markets through a labyrinth of narrow streets lined with half timber-clad brightly colored houses. Colmar is located in northeastern France near the German border, and its fairytale-style architecture is common in the Alsace region. It is, however, somewhat more pronounced in Colmar and the town center, which looks like it could be made from gingerbread and makes for a perfect backdrop for holiday lights. 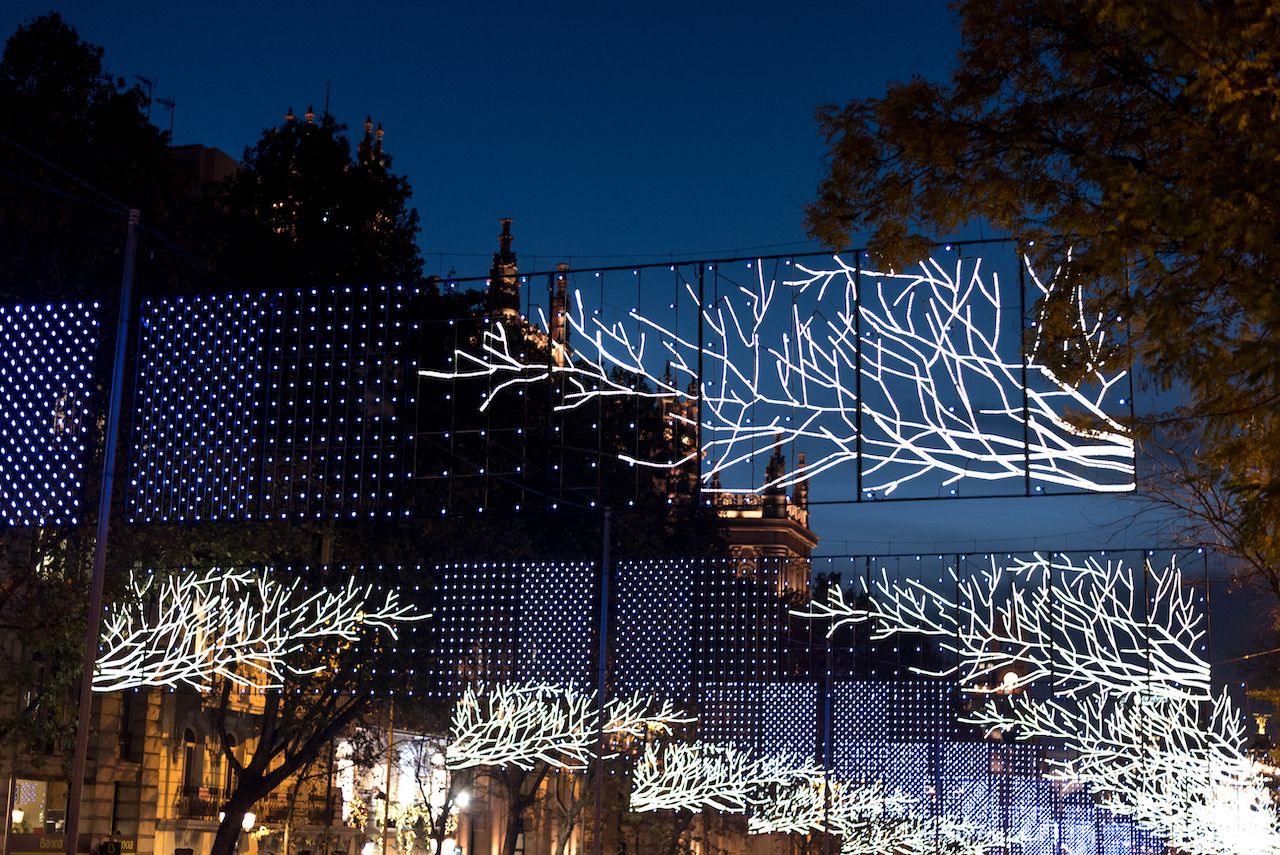 Madrileños don’t mess around when it comes to decorating the city for the holidays. Between the end of November and the beginning of January, the city lights up. From small to extravagant shop window displays to streets, trees, and buildings — all are dressed for the occasion. Last year, Madrid saw a display representing a starry sky that stretched over some of the main city streets. Towering Christmas trees were also peppered throughout squares and other public places, all of which were donned in multi-colored lights. It’s a citywide effort too, as each year artists, designers, and architects work together and put forward designs to transform the city. 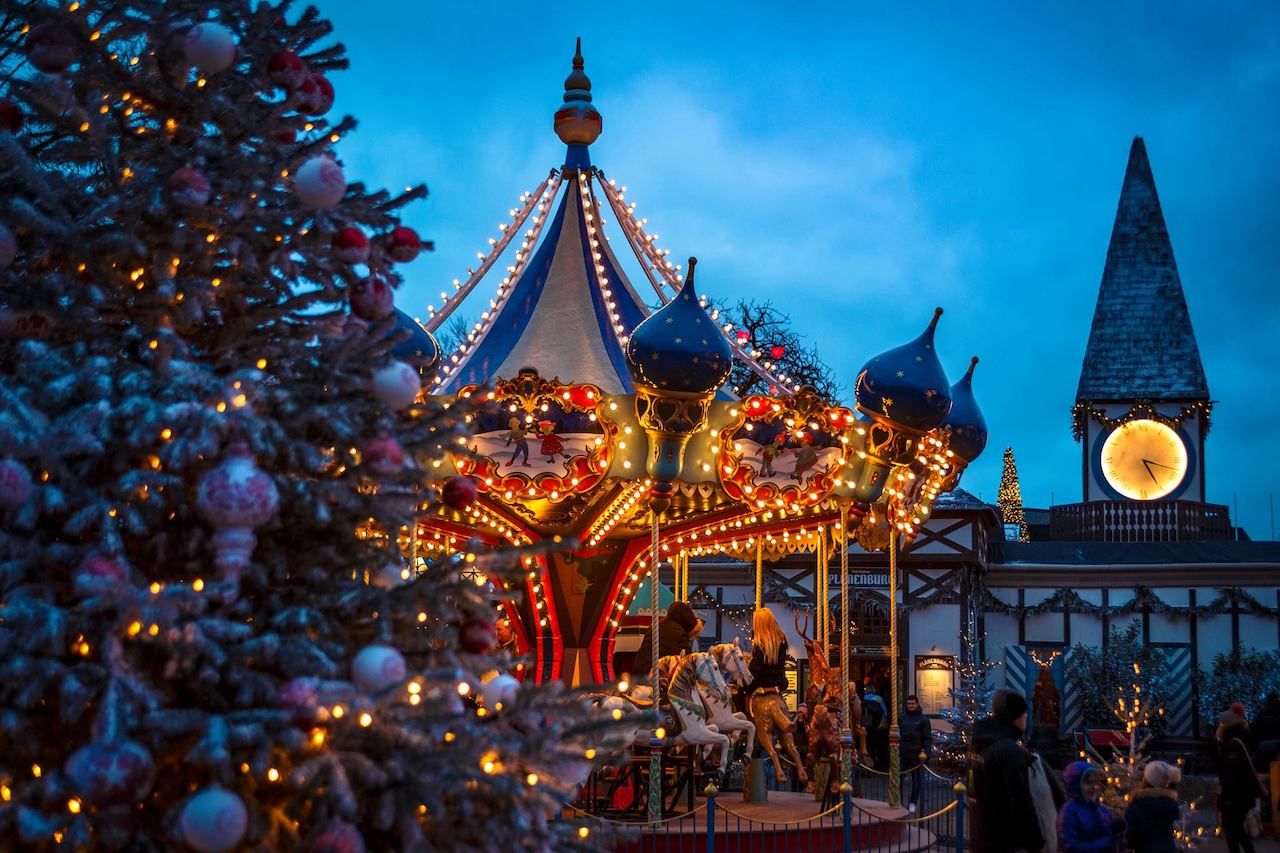 Also kicking off in November, Tivoli, an amusement park in Copenhagen, welcomes visitors to experience its spectacular winter wonderland — and it’s one of the best in the world. The gardens are lined with thousands of Christmas trees that are all decorated with multi-colored ornaments and lights. Father Christmas’s grotto, Honey Cake Castle, is filled with Danish Hagg and sparkly lights. This year, and for the first time, there will be a Christmas tree on Tivoli Lake and clips of festive stories will be projected onto a beautiful, large heart-shaped installation. 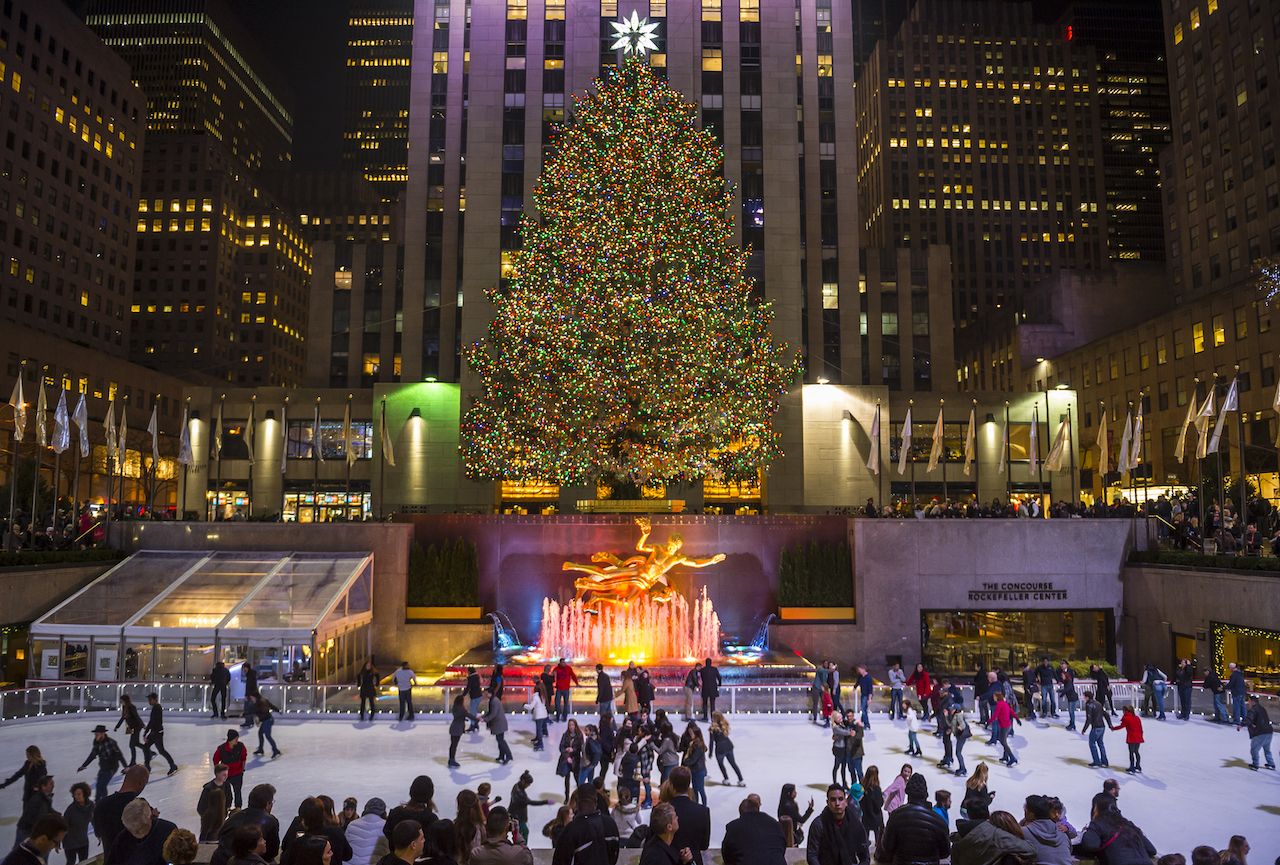 The lighting of the Rockefeller Christmas tree typically occurs in early December and is adorned with over five miles of lights. Towering above the ice-skating rink, a tree has been part of holiday celebrations in the center since the 1930s and attracts millions of guests each year. The star that adorns the top weighs a whopping 900 pounds and is made Swarovski Crystal. Guests can enjoy the lights and beautiful tree until mid-January. Of course, there are other holiday light displays in the city, and it would be remiss not to mention the illumination of Dyker Heights in Brooklyn, which is outstanding. 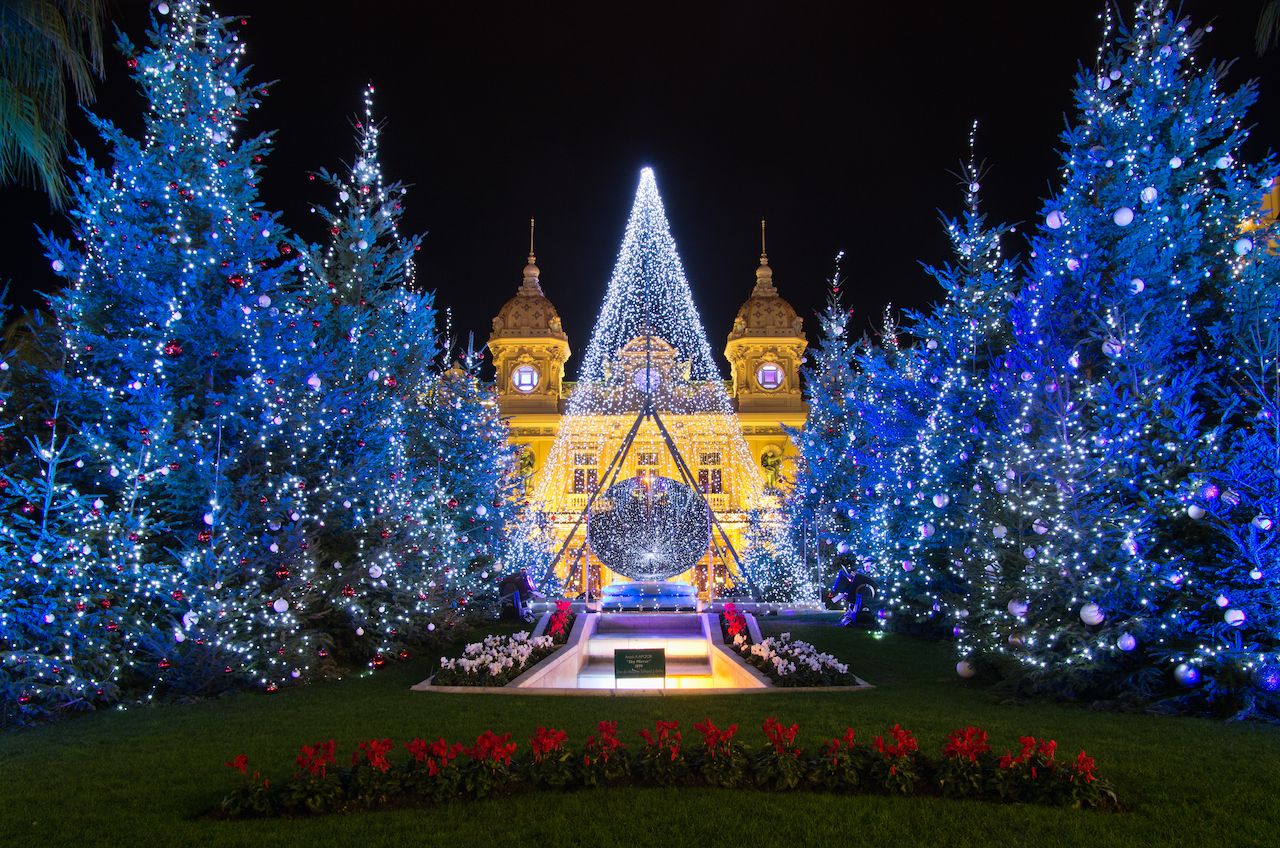 Annually, Monte Carlo’s festive light celebrations pull out all the stops. Held at The Casino de Monte-Carlo, one of the most famous casinos in Europe, it runs for three days at the end of December. Guests are treated to 3D projections that illuminate the facade of the glamorous Belle Époque casino and a thrilling light show. Monte Carlo glows year-round in the evening, as many of the buildings, especially the casino, are lit with floodlights, but over the festive period, the city is transformed with impressive holiday light displays. In fact, previous years have seen provisions including hundreds of trees, four miles of garlands, and star flashbulbs all brought to life by colorful spotlights. 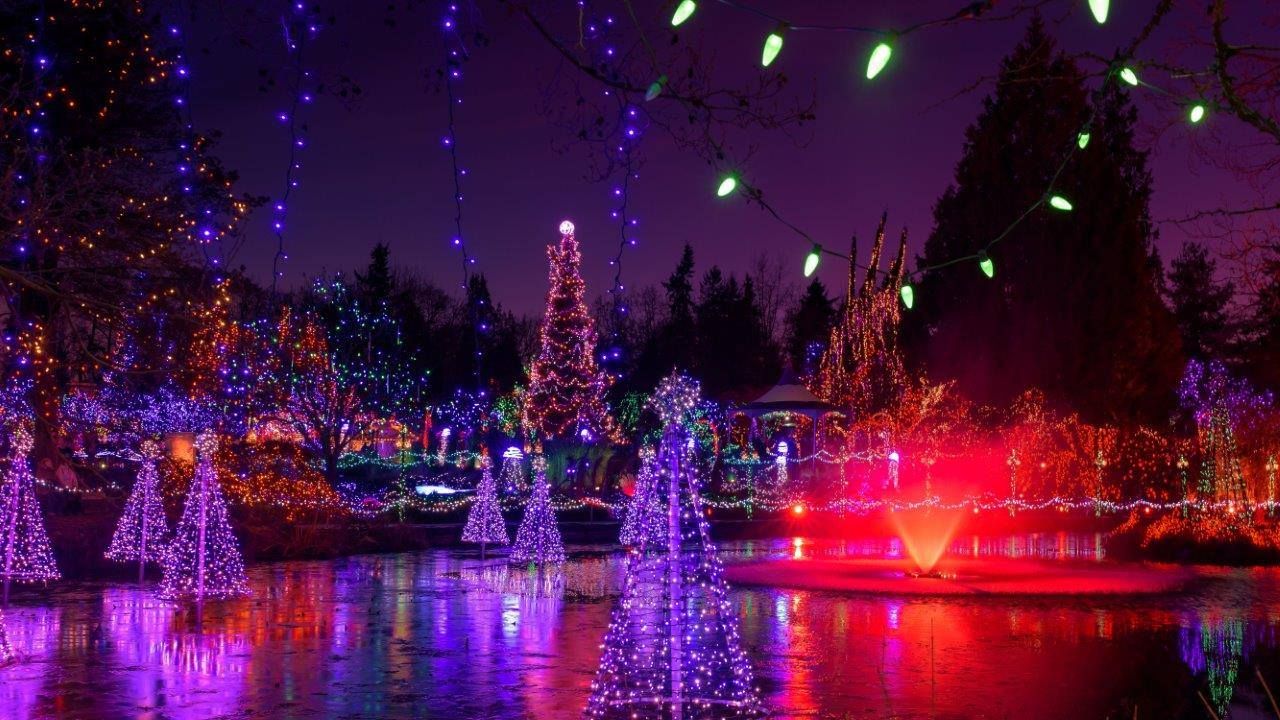 Vancouver’s Botanical Garden, VanDusen, shines through the winter darkness in December with its magnificent Festival of Lights. The wonderland is draped with over one million lights over the 15 acres of garden. This is Vancouver’s longest-running winter attraction, and previous years have attracted over 100,000 visitors. The dancing light show is a must-see. The performance lasts around eight minutes and replays every hour during the festival. Other places to enjoy the Christmas light displays in Vancouver include the Canyon Lights at Capilano Suspension Bridge, Bright Nights at Stanley Park, Lafarge Winter Lights, the city’s Christmas tree lights, and the Vancouver Parade of Carol Ships. 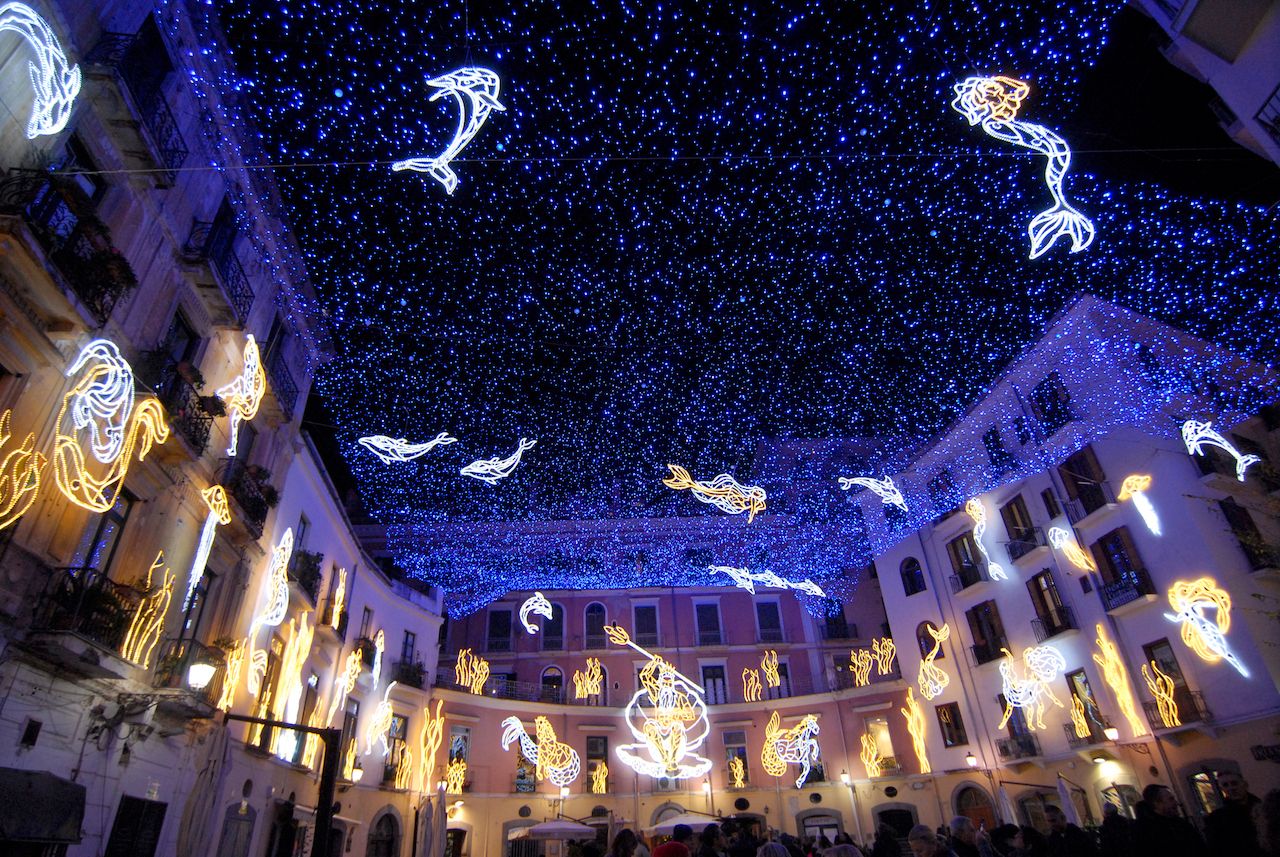 The festival of Luci D’Artista fills the Medieval town of Salerno with spectacular Christmas light installations and pulls in crowds from all over the world. Each year artists draw inspiration from a central theme and decorate the port town from top to bottom. in 2019, visitors were treated to light displays of a forest of trees, constellations, flying bears and jugglers, and a 60-meter high panoramic Ferris wheel. The Christmas markets are also famous, and impressive nativity sand sculptures pepper the beach. 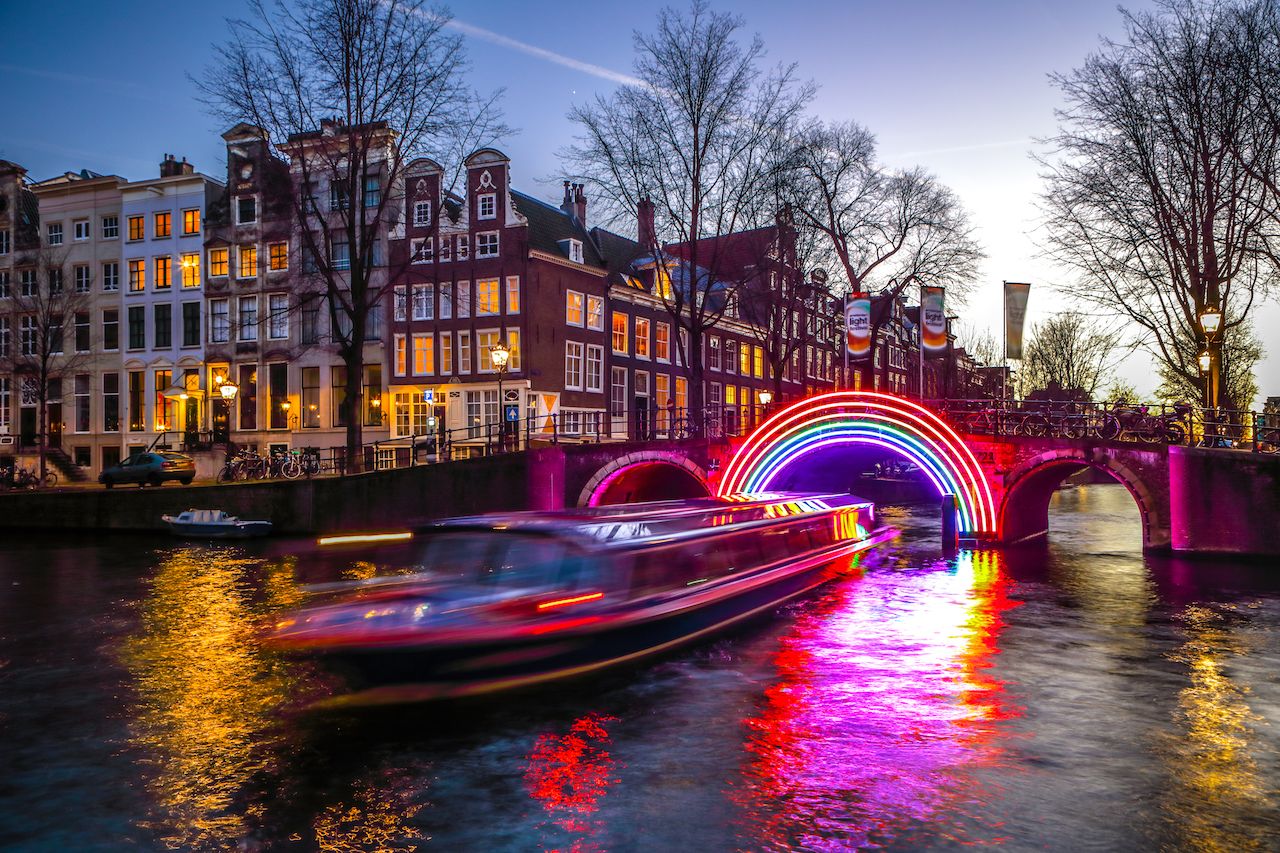 Every year, renowned artists from all over the world bring their talent to Amsterdam for the annual Light Festival. The event runs between December and January in the city center and is best enjoyed by boat as the canals are brought to life with light sculptures. Many historical buildings are also transformed by glittering lights which can be enjoyed independently or via a guided walking tour. The event is very popular, so it is advisable to book tickets in advance. 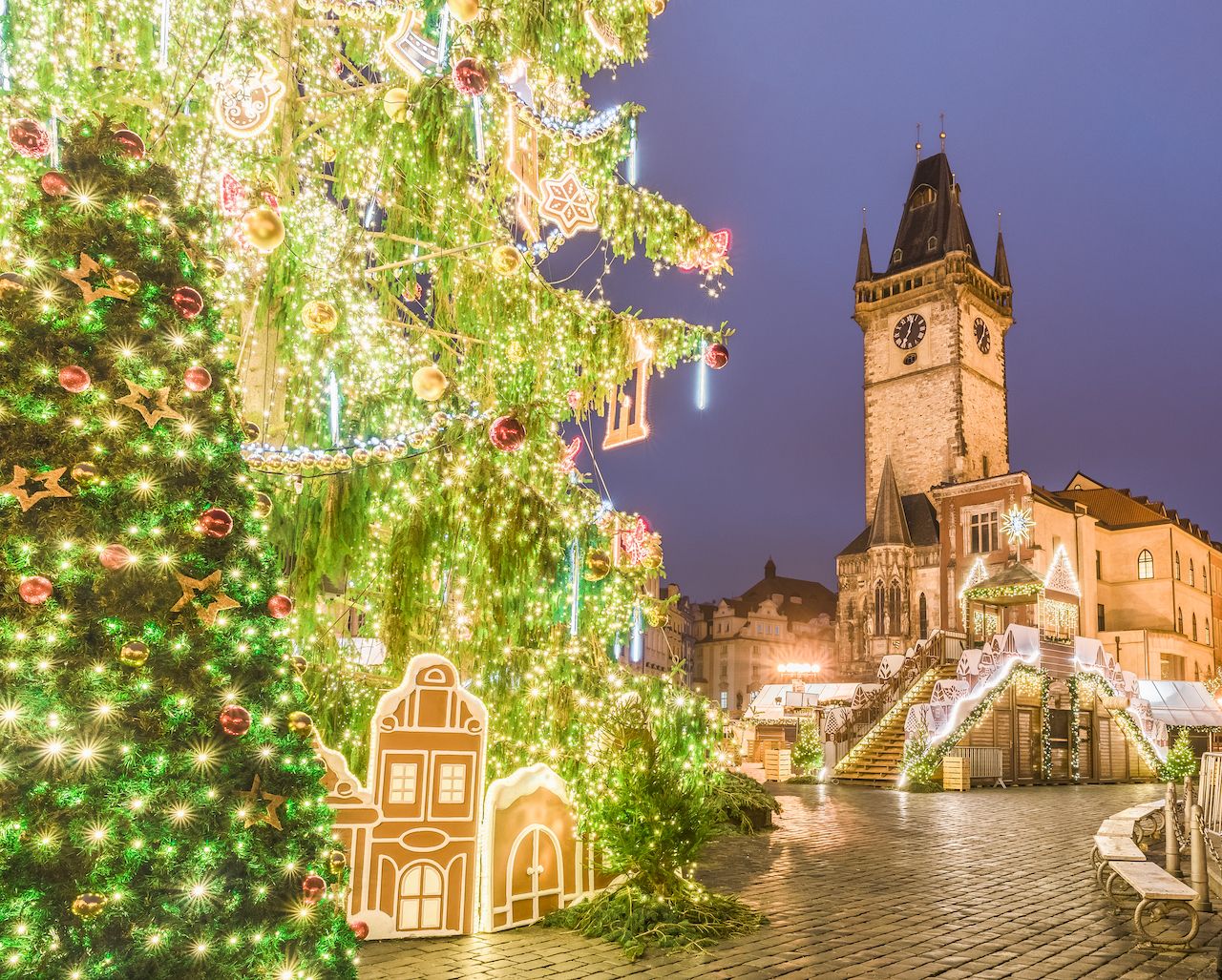 The lights in Prague illuminate its Christmas market, which is one of the prettiest in Europe. Between November 28 and January 6, the Old Town Square in the heart of the city is packed with dozens of wooden stalls all adorned in festive colorful lights. The central feature is the beautiful Christmas tree, which is impeccably decorated with ornaments. Visitors who come to enjoy the holiday lights are treated to stalls selling roast chestnuts, mulled wine, Czech Christmas biscuits, and local sausages. 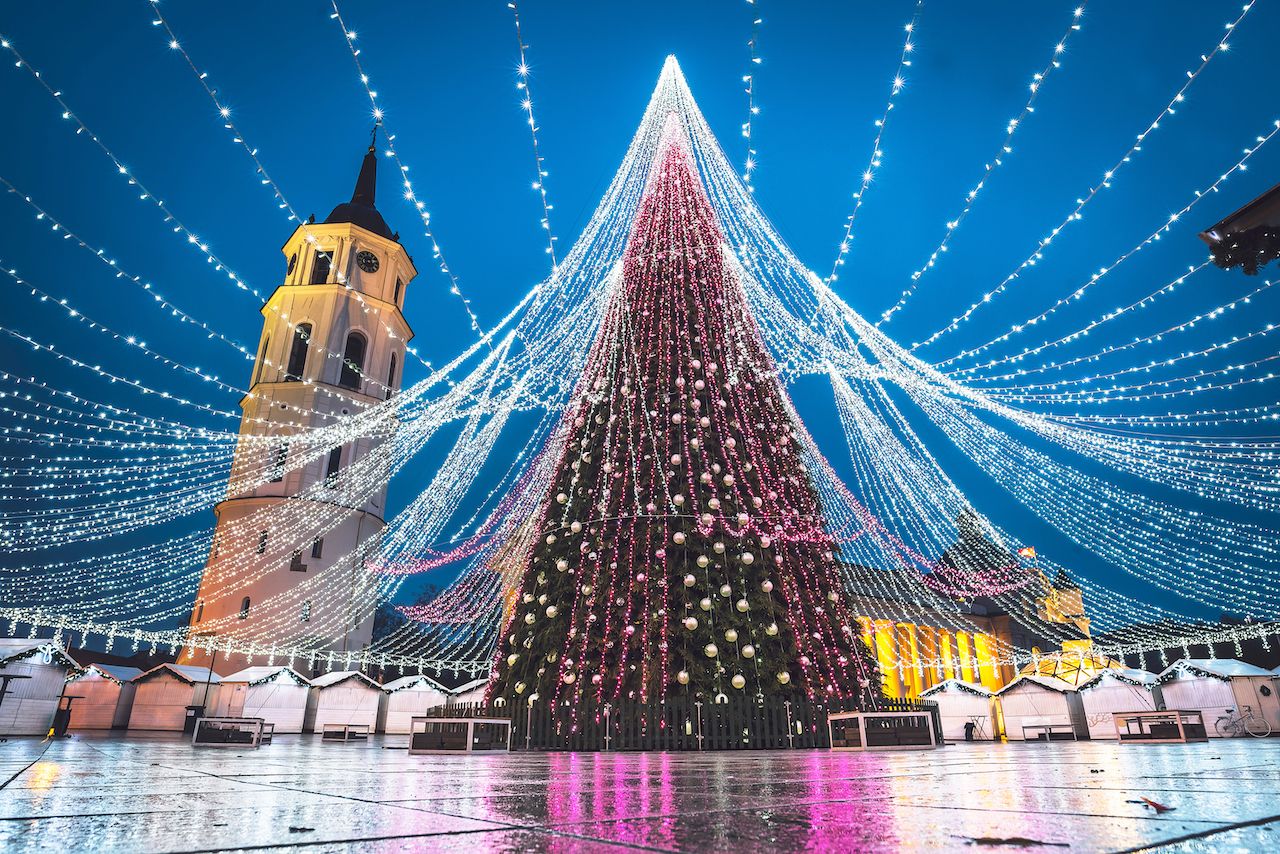 On December 1, the holiday season is kicked off in Lithuania with the lighting of the Christmas tree. The capital, Vilnius, is well known for its unique Christmas tree lights, and each year the designs are very much kept a secret until the unveiling. In 2019 the tree was lit with over 100,000 blue and white bulbs, which stretched over three miles in length. Vilnius’s tree is also sustainable, as it is constructed from 6,000 branches of other damaged trees. 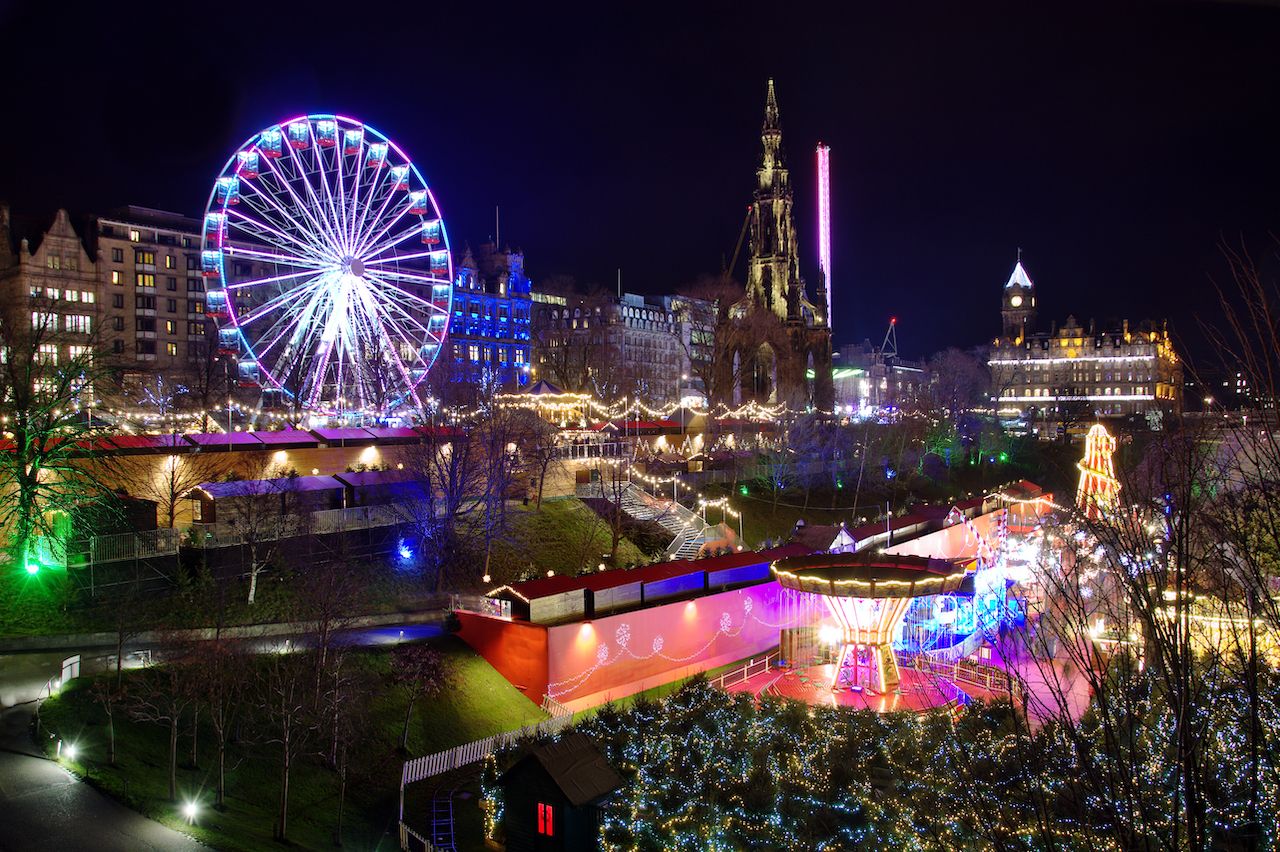 Edinburgh in winter is beautiful, and during December the city’s best features are highlighted and celebrated with lights. The main Christmas market in Princes Street Gardens is brightly colored, and the garden’s trees are wrapped in small white tree lights. George Street, the popular shopping spot, transforms into a tunnel of light, often with a silent disco where people can dance through the lights to music from headphones. However one of the best places to celebrate the coming of the season is Edinburgh’s Botanical Gardens, which annually hosts a very impressive festival of lights. 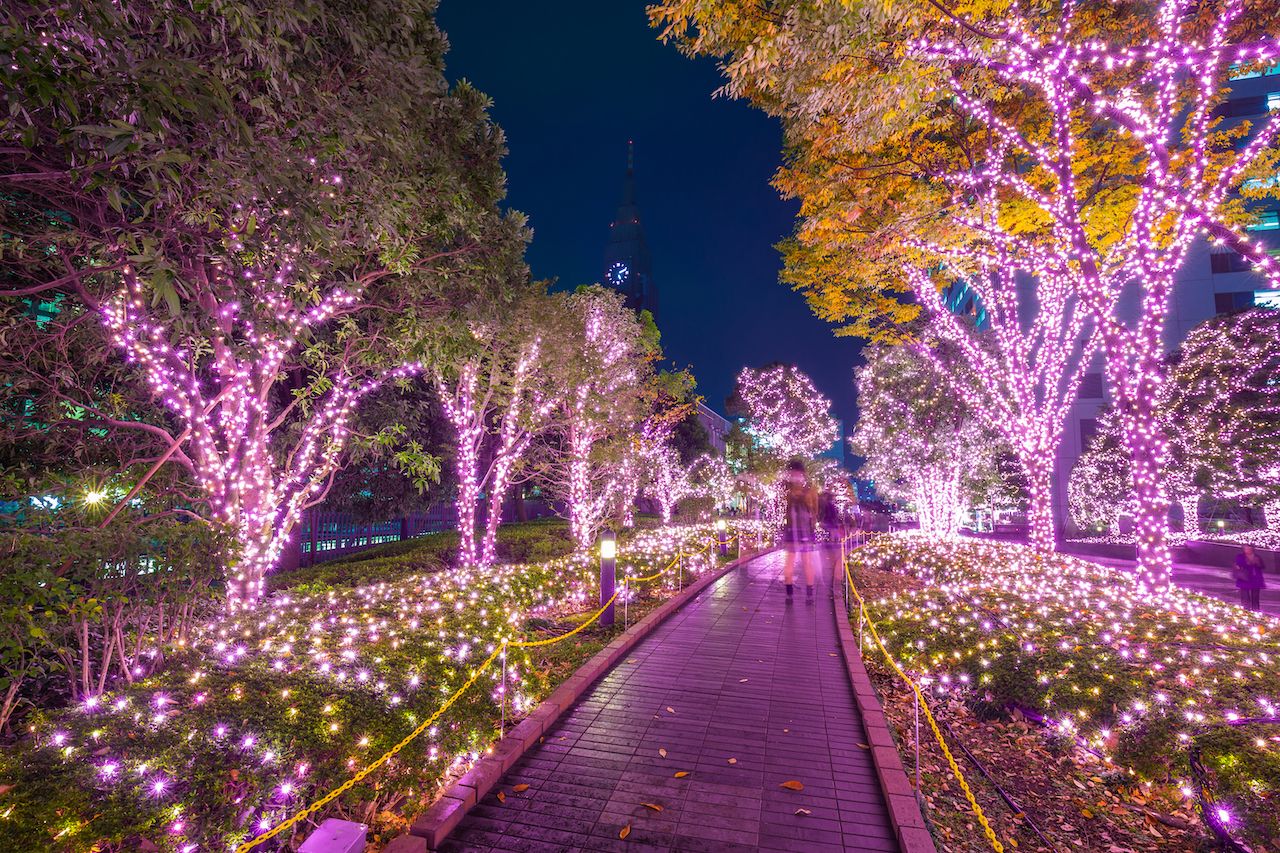 Tokyo has really embraced celebrating the holiday season with lights. There are quite a few places to visit in the city during the winter months to enjoy illumination events. Yebisu Garden Place is opulent with over 100,000 LED lights, a 10-meter Christmas tree, and a five-meter large Baccarat chandelier. Marunouchi Illumination is an annual favorite with over 200 trees draped with over a million bulbs. The trees along the Meguro River between Gotanda and Osaki stations are also dressed up for the occasion in beautiful baby pink, reminiscent of the springtime blossom.

Holidays15 European Christmas Markets You Need To Go To This Holiday Season
Tagged
Events Festivals Holidays
What did you think of this story?
Meh
Good
Awesome