When outsiders think of Philadelphia, Independence Hall, the Liberty Bell, or maybe even the steps from Rocky may come to mind. They picture a big city where they can eat philly cheese steaks and visit the oldest indoor farmer’s market in the US.

What most people don’t know is that Philadelphia has one of the best park systems in the US, with over 10,000 acres of parks. With 95 percent of residents having a park within a 10-minute walk, the park system enhances the quality of life for everyone in the city. Philadelphia’s parks are imbued with history, ranging from the Revolutionary War to the Industrial Age, and continue to preserve the region’s natural beauty with their lakes, creeks, flora, and fauna.

Here’s a sampling of parks in and around the City of Brotherly Love to visit on your next trip. 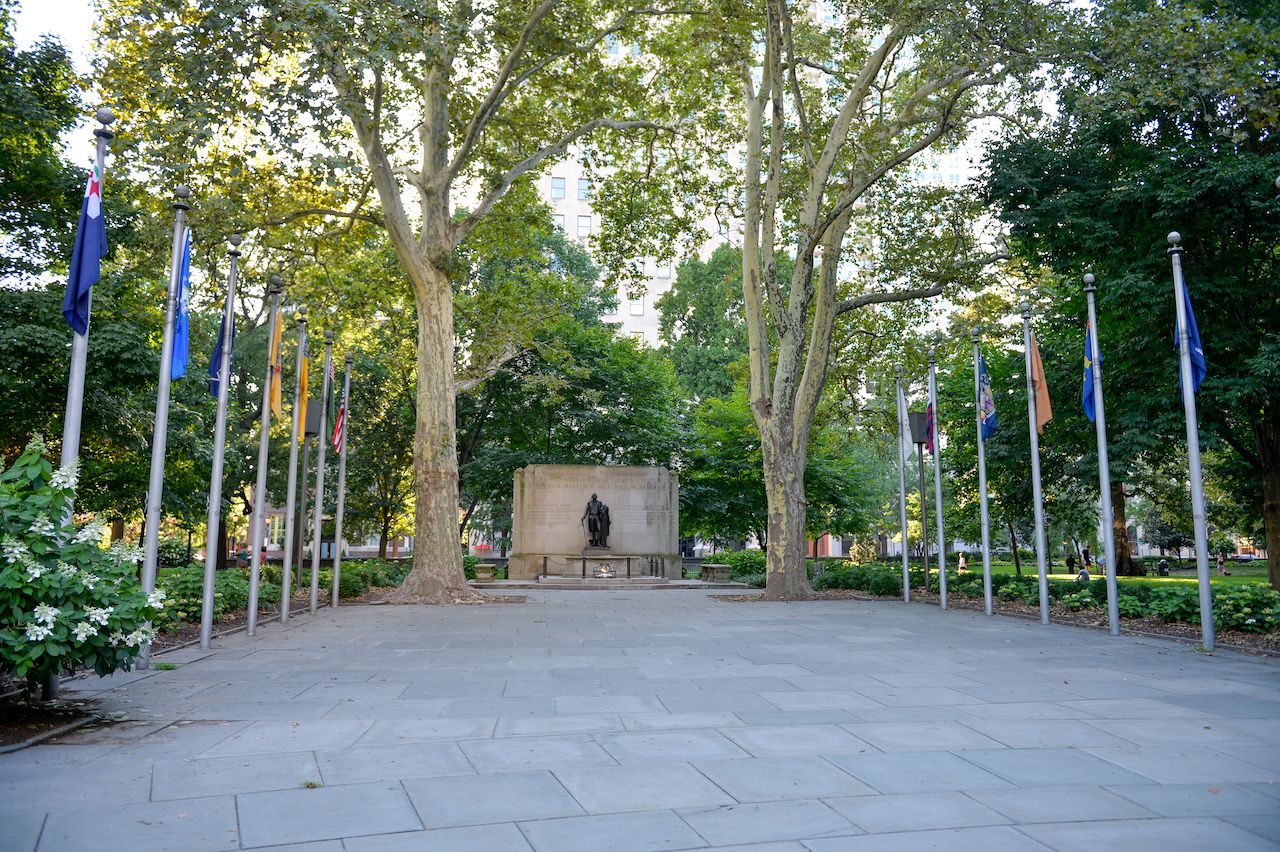 Washington Square, a recognized national historical park, is just a block away from Independence Hall in Center City. It is one of five town squares laid out in 1682 by the surveyor for William Penn, Philadelphia’s founder. This park of over six acres is an oasis of green space in the heart of the city. Within its broad, tree-lined paths lies the monument of the “Tomb of the Unknown Revolutionary War Soldier.” The tomb was a mass grave for troops killed in the Revolutionary War, and it honors the soldiers and sailors of the Revolutionary War.

Before entering on the park’s western side, grab a cup of coffee or tea at the local Talula’s Daily — not to be confused with the famous sister restaurant, Talula’s Garden, next door — and go for a stroll around the interwoven walking paths of the park. Afterward, if you exit on the east side near Sixth and Walnut, you’ll see two additional massive green spaces that are part of Independence National Historical Park. After exploring these historic sites, you can continue walking down Walnut Street through Old City and stop at a secret green space known as the 18th century garden (between Third and Fourth Streets on Walnut Street). 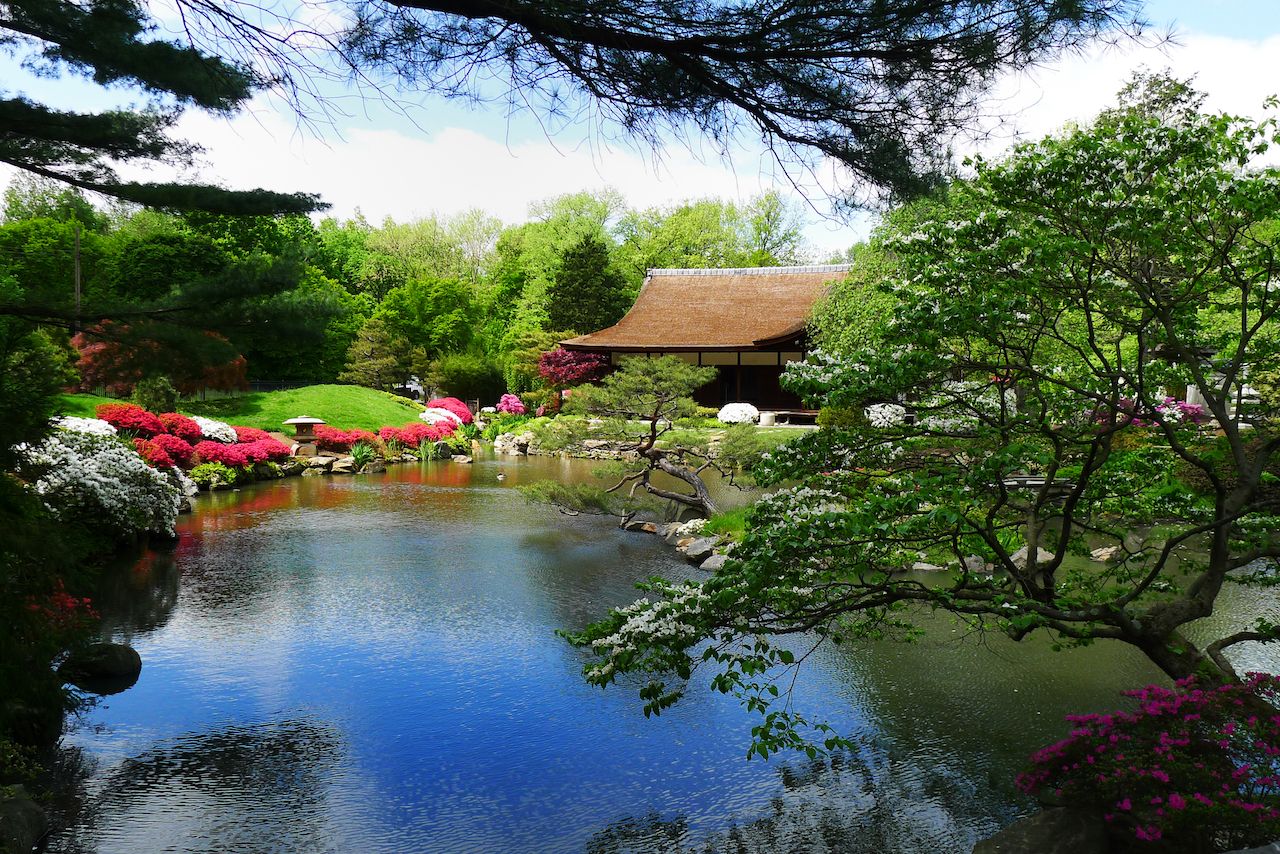 On the northwestern part of the city is the massive Fairmount Park. It’s the largest city park in Philadelphia, with over 2,000 acres of trails, historic mansions, landscapes, waterfront, lakes, and more.

Fairmount Park is split into an east and west side that are bisected by the Schuylkill River. Inside, there are lots of activities to choose from. You can go for a walk, jog, bike ride, or even go zip-lining. You can head over to the Shofuso Japanese House and Garden, horticulture center, or even Philadelphia Zoo, which is part of the park.

Once you’ve explored those activities, you can watch rowers on the Schuylkill River with boathouse row in the background, admire the myriad public artworks or visit the museums throughout the park grounds. If you’re looking to stay through the evening, check to see if a concert is playing at the Mann Center for the Performing Arts, a partially covered outdoor amphitheater. 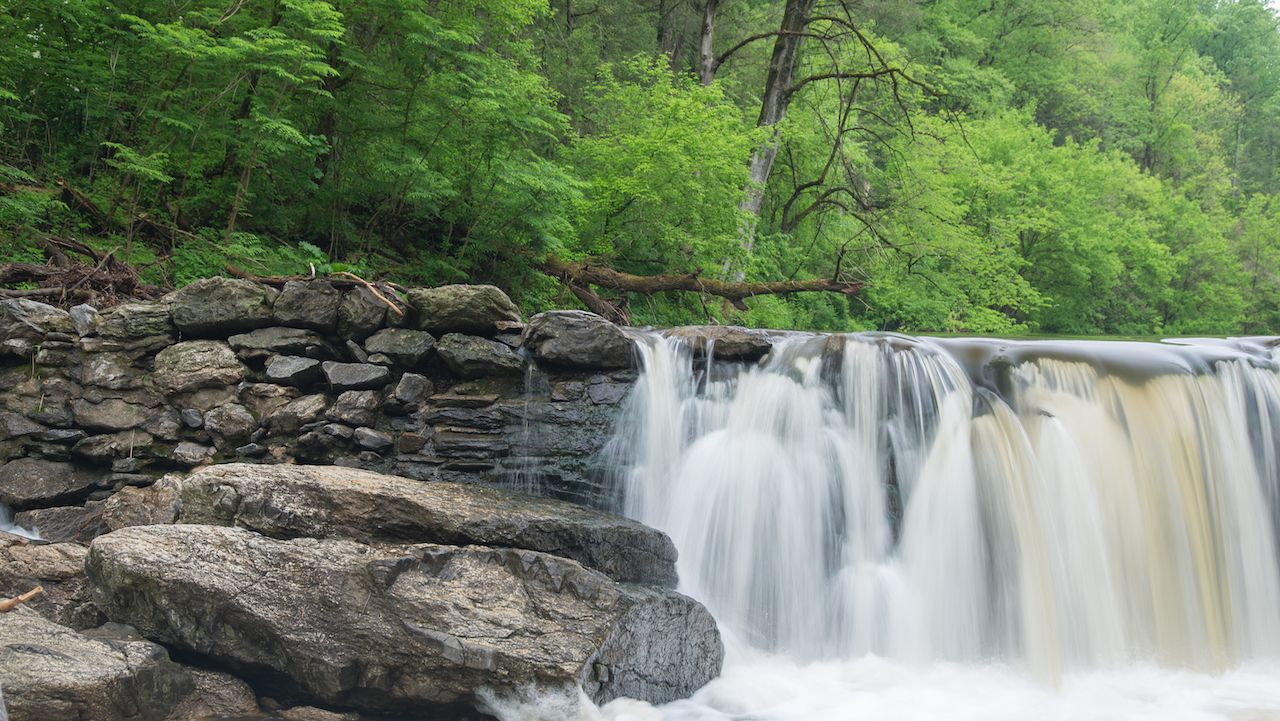 Wissahickon Valley Park is a short 10-minute drive outside the city center of Philadelphia. Its 57 miles of trails are great for outdoor activities, including walking, mountain biking, and, once the snow falls, cross-country skiing. On some trails, you’ll even find off-road bikers and horseback riders — although permits are required for those activities.

If you’re looking for a flat walking trail, head to Forbidden Drive. In 2018, this trail was named Trail of the Year by Pennsylvania’s Department of Conservation. You’ll feel transported as you walk along the path and admire the famous covered bridge and quaint Valley Green Inn. For a nice break, it can be relaxing to grab a warm meal at the inn’s porch or a refreshment at the near-by snack stand on the side of the inn. Call ahead to make sure they are open, as hours vary by time of year. 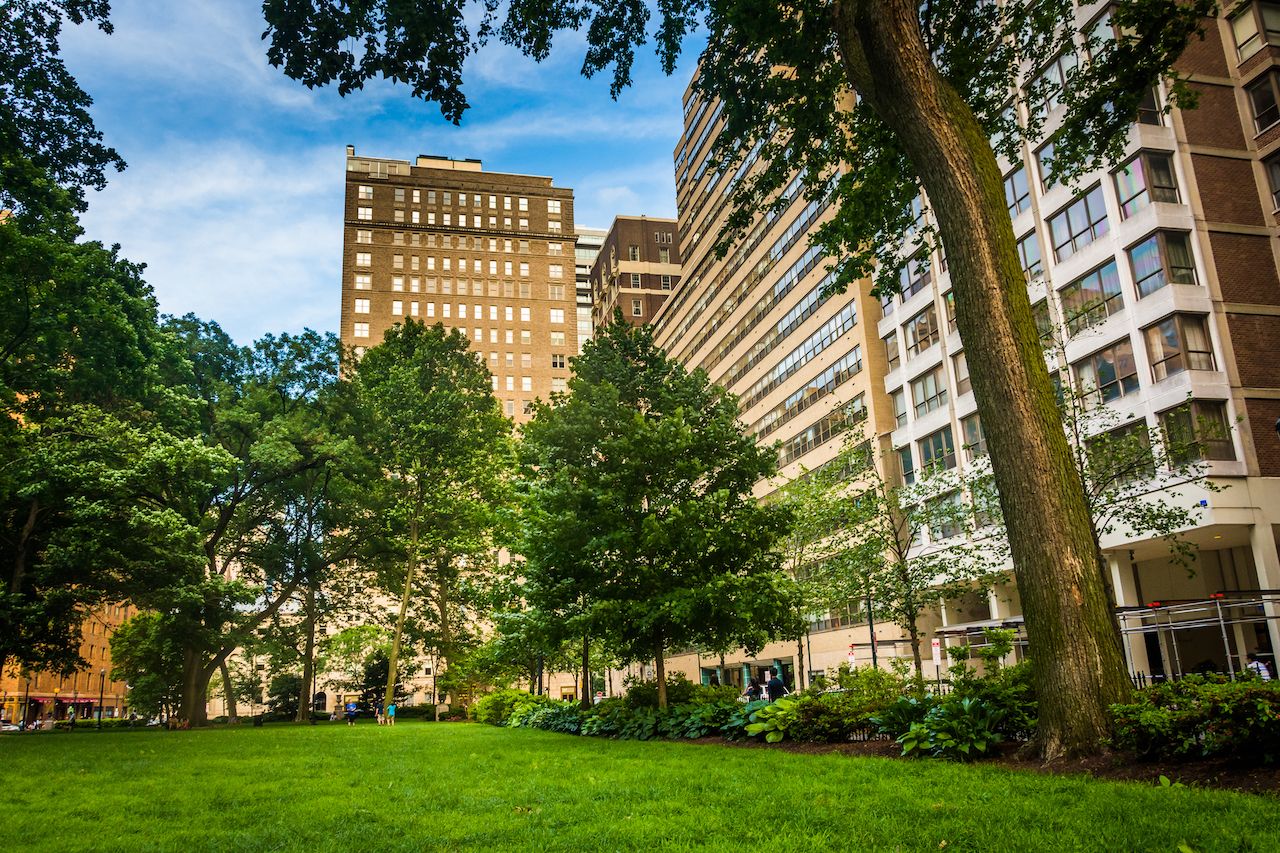 Around the edges of Rittenhouse Square, you’ll find high-rise residences, an office building, restaurants, and luxury stores. In the square, tourists, residents, and workers gather to relax. Some hang near the reflecting pool, the park’s centerpiece; others sit on the edge of the oval plaza, eating their lunches or observing “Duck Girl,” a statue of a girl standing in the pool with a duck under her arms.

You can sit outside at Parc restaurant and enjoy a great meal and view of the park. If you go on a Tuesday or Saturday, you can usually stroll by the farmer’s market that is set up on the outer edge of the park. Enjoy the food as you walk around the park, sit on a bench, or stroll the nearby shopping district. 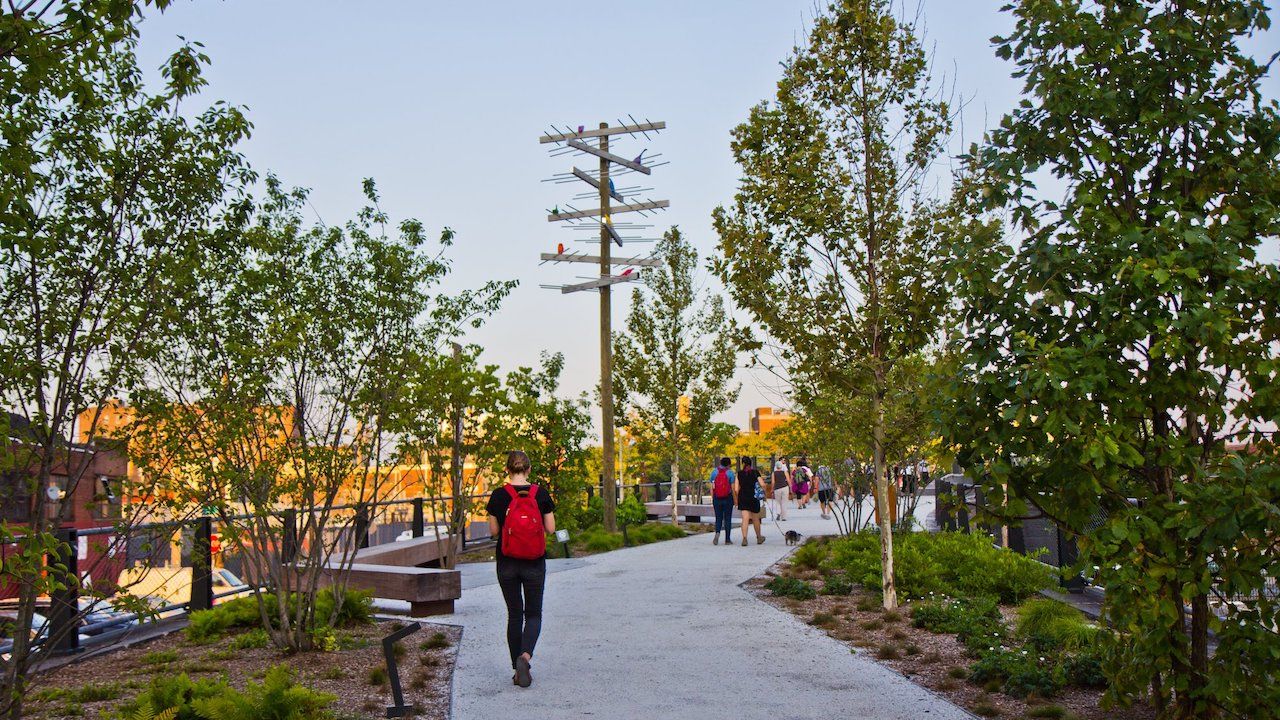 Phase One of the Rail Park, on the northern border of Philly’s Chinatown, opened in June 2018. The city has transformed an abandoned viaduct into an elevated park that runs a quarter of a mile. Eventually, the park will cover three miles of abandoned rail tracks, tunnels, and streets – and will be twice the length and twice the width of New York City’s High Line Park.

If you access it just off Broad Street on Noble Street, you’ll see a historic stamped-iron map that shows the factories, buildings, and rail routes that were central to the Industrial Age. It’s a unique park where you can relax on one of the giant bench swings that hang from steel girders and take in the cityscape. 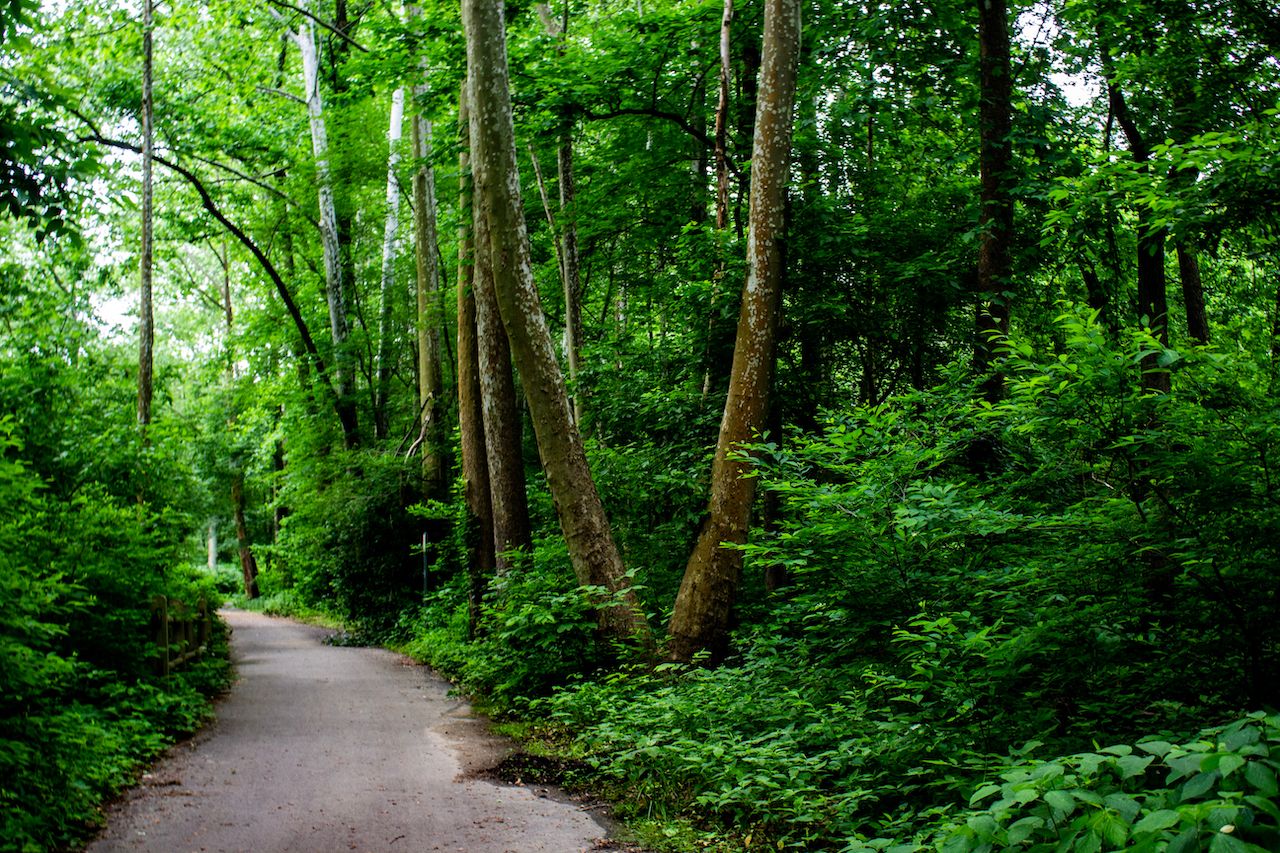 Pennypack Park is a massive preserved green space that stretches nine miles across the northeastern section of Philadelphia and has plenty of trails for walking, jogging, and rollerblading. As you walk along the trails, you’ll see several historical sites, including the oldest stone arch bridge in the country, the Frankford Avenue Bridge. There are over 10 different entrances to the park, but not all feature parking, so be sure to visit one of the lots with parking if you’re going to drive. 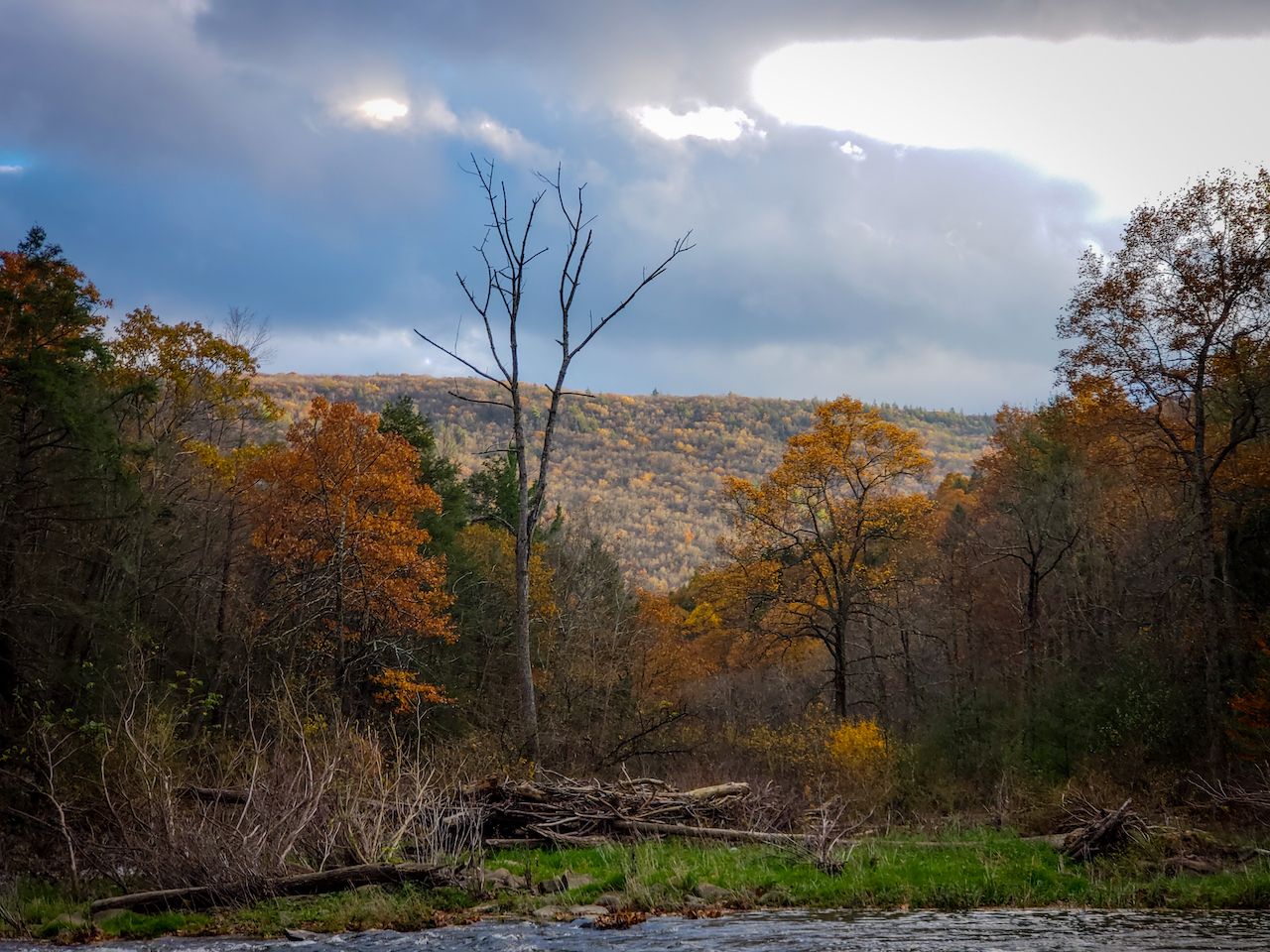 Peace Valley Park in Bucks County, north of Philadelphia, is less known than historic Valley Forge Park, also in Philly’s suburbs, but we’d recommend a visit. Its central attraction is Lake Galena. Covering 356 acres of the 1,500-acre park, the lake is an ideal spot to fish, rent a boat, or learn to sail.

If you’re more of a landlubber, you can walk or cycle along the 14 miles of paved and natural trails that wander through wildflower meadows, wetlands, and woods. Keep your eyes open for wildlife, wildflowers, and some of the 250 species of birds that frequent the park. For closer observation of aviary life, stop at the bird shelter.

For a learning experience, check out the Peace Valley Nature Center. It offers nature walks, moonlight hikes, and workshops. Finally, take a break at the picnic and playgrounds. When done, drive to the quaint downtown of Doylestown, a nearby suburb outside of Philadelphia. 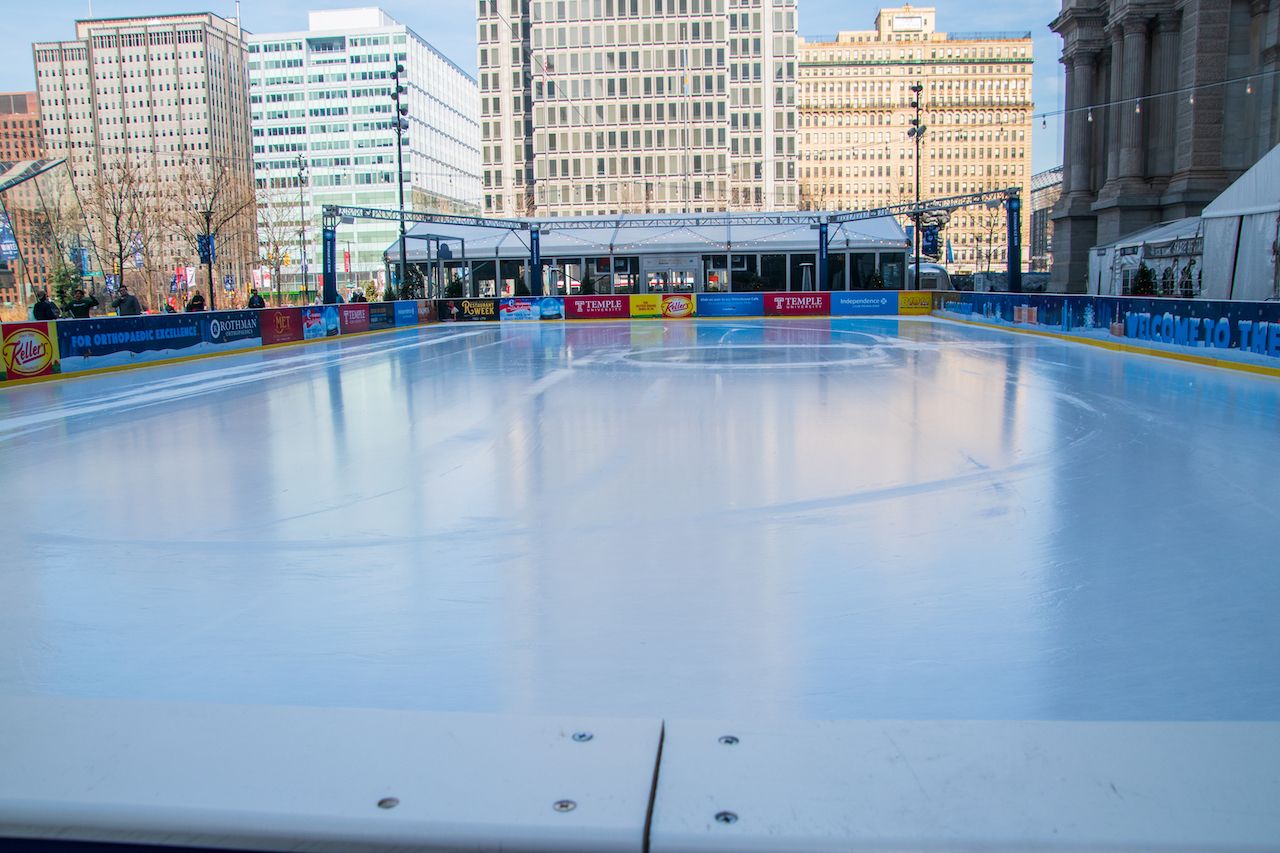 Most of the parks above are best visited during the warmer months when it’s not too cold — although, as we’ve mentioned, some like Wissahickon Park have cross-country ski trails. If you are in Philadelphia in winter, though, head to the more urban Dilworth Park, where you can go ice skating and explore its “Wintergarden” wonderland.

Or go to the Bluecross Winterfest on the Delaware River Waterfront, which is not part of the city or federal park system but is supported by a non-profit corporation. In summer you can rollerskate on the rink, but during Winterfest, you can ice skate, listen to music, warm up by the firepits, play in the arcades, and drink plenty of hot chocolate. Whichever time of year you come to Philadelphia, perhaps renting a house for your stay, there are plenty of green — and sometimes snowy white — spaces to discover.