It’s officially Shark Week on the Discovery Channel, perhaps the most posted-about TV event of the year that doesn’t involve Jon Snow. If watching all that ferocious fish action has you thinking, “Man, watching this on TV ensures I keep all my limbs, but it sure would be cool to swim with them!” then there are tons of places around the world where you can do it. And most of them will ensure you leave in one piece. From the Galapagos Islands and Fiji to unexpected hotspots like North Carolina, here are the best places in the world to go diving with sharks and what you can expect to see there. 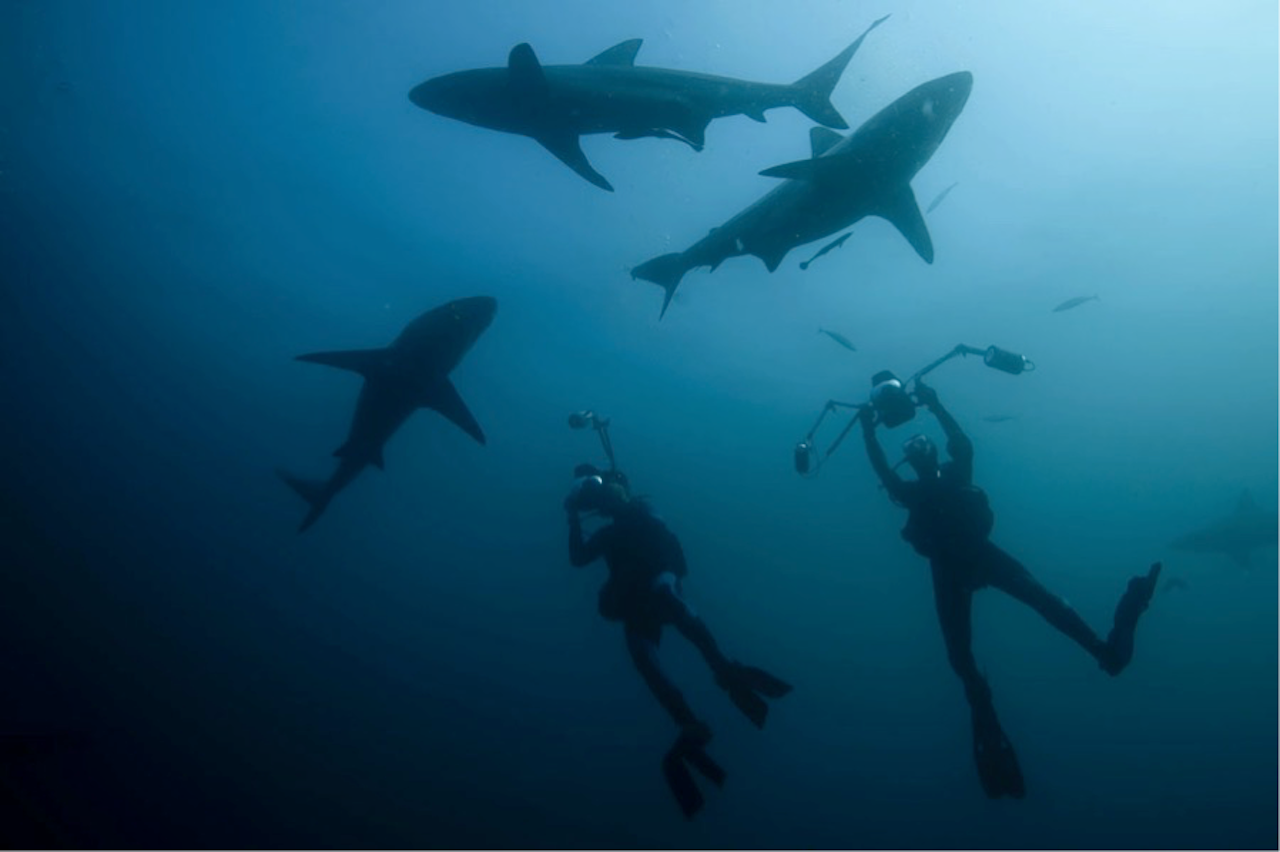 Fiji’s soft coral has made it one of the world’s top diving destinations to check out the colorful fish that live off the reef, which also makes it one of the top feeding destinations for sharks. Food chain suckas! You can catch all the carnivorous action off Fiji’s main island in the Beqa Lagoon where the Nanuku resort offers an hour of cage-free swimming with these beasts for $200. It’s one of the few spots you can dive freely with sharks amid some of the most beautiful scenery in the world. 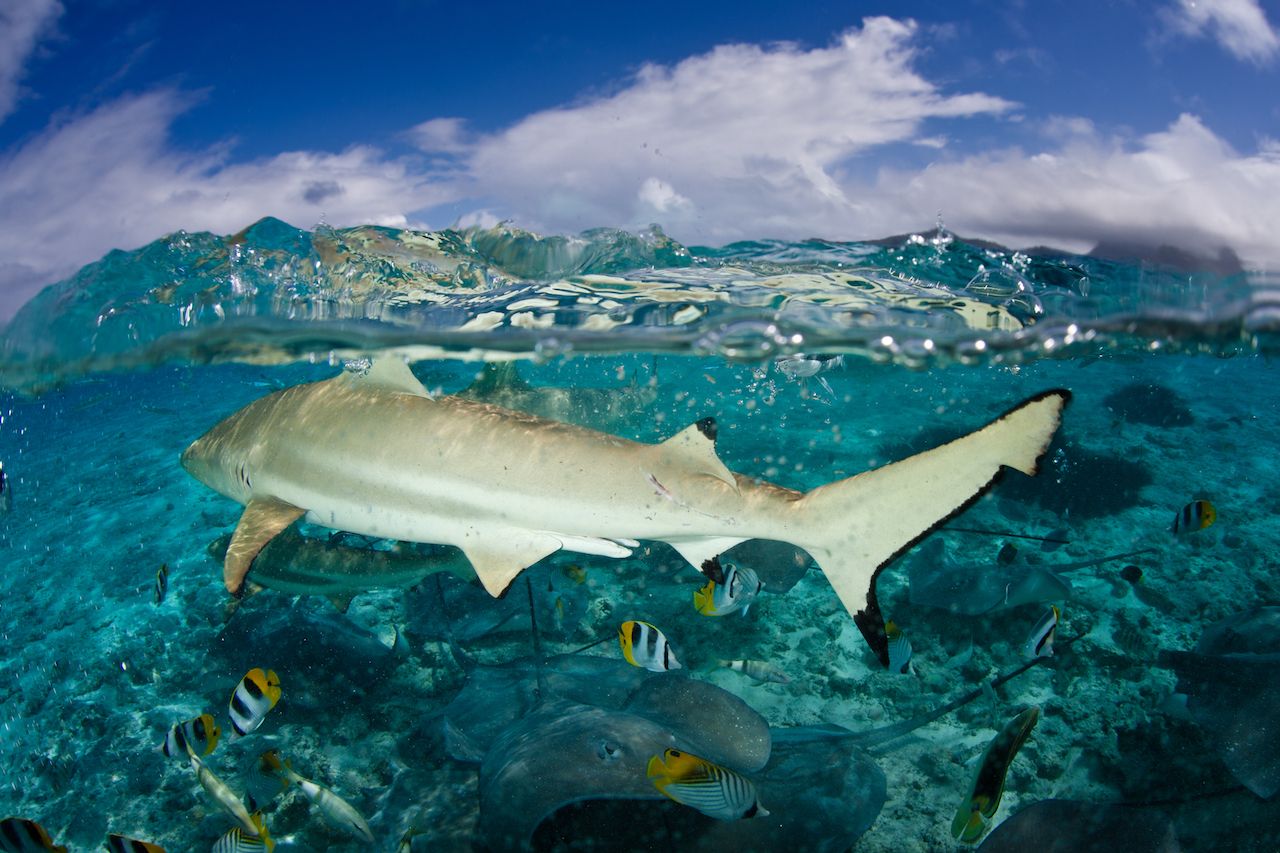 The sleek, bug-eyed blacktip reef shark is one of the most misleading-looking sharks on the planet as it appears to have the viciousness of a Great White but is surprisingly friendly. Blacktips hang out in large groups, so if you see one, you’re going to see dozens. Clear up the memory card in your underwater camera and hit the Conrad Bora Bora Nui, whose lagoon snorkeling experience has you swimming with blacktips along with manta rays, tropical fish, and sea turtles. 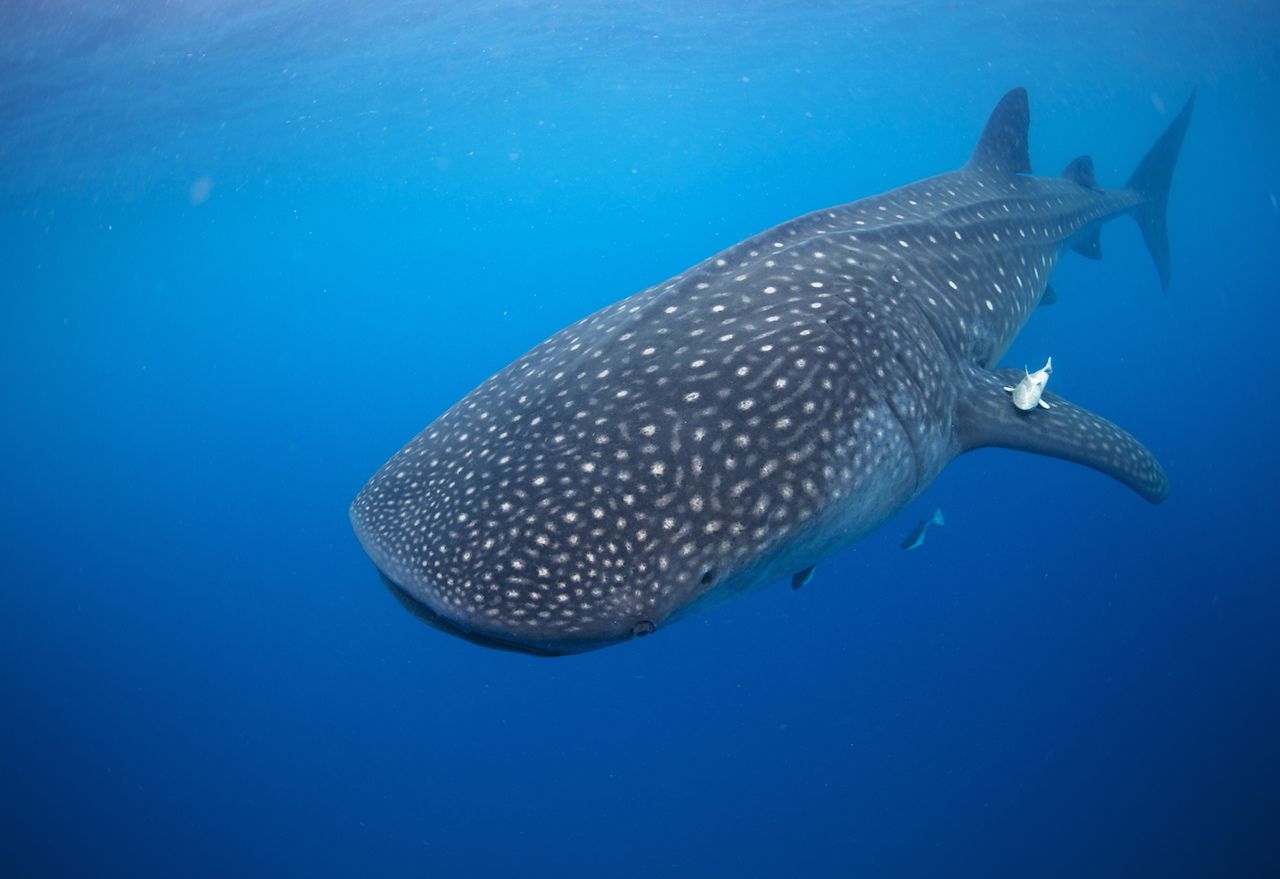 These 40-foot-long whale sharks are filter feeders that cruise the coast of Mexico feeding off eggs and other tiny organisms. Swimming with them leaves you nothing to fear as they have about as much interest in chomping your arm as they do a baseball. During the height of summer, they’re best found in Isla Mujeres near the Yucatan where Pro Dive Mexico takes guests on trips 20 miles out into the Caribbean. The rest of the year, head to Cabo San Lucas where the Esperanza resort runs full-day snorkeling trips to La Paz to swim in its feeding grounds. 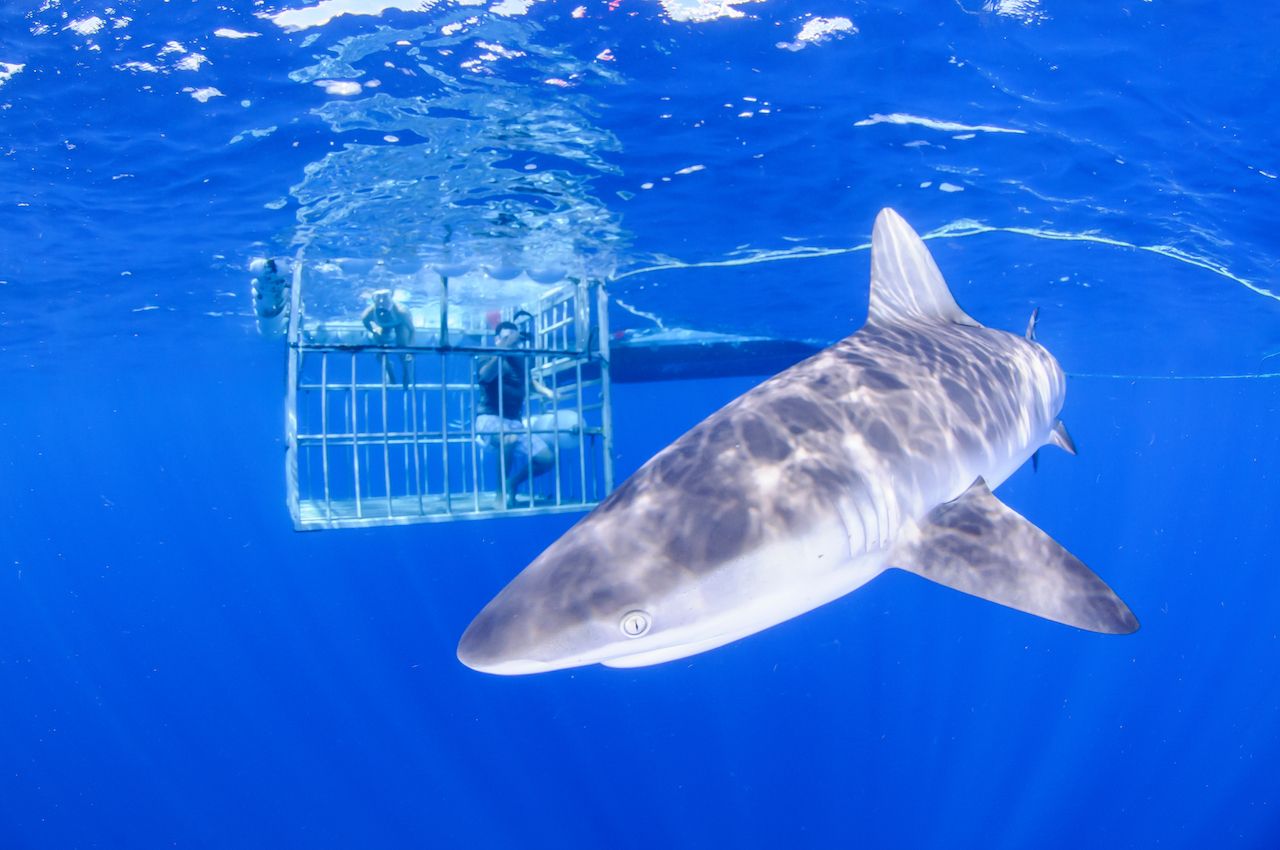 In Hawaii, you’re seeing allll the sharks, though the ones we mentioned above are the ones you’re pretty much guaranteed to see if you spend long enough underwater. The Turtle Bay Resort on the north shore of Oahu runs a daylong cage-diving adventure for $96, during which you’ll bask in the Hawaiian sun between dips in the cage. Underwater, sharks will come right up and say hello from behind a set of big, metal bars. You might also spot green sea turtles and humpback whales if you go between November and May. 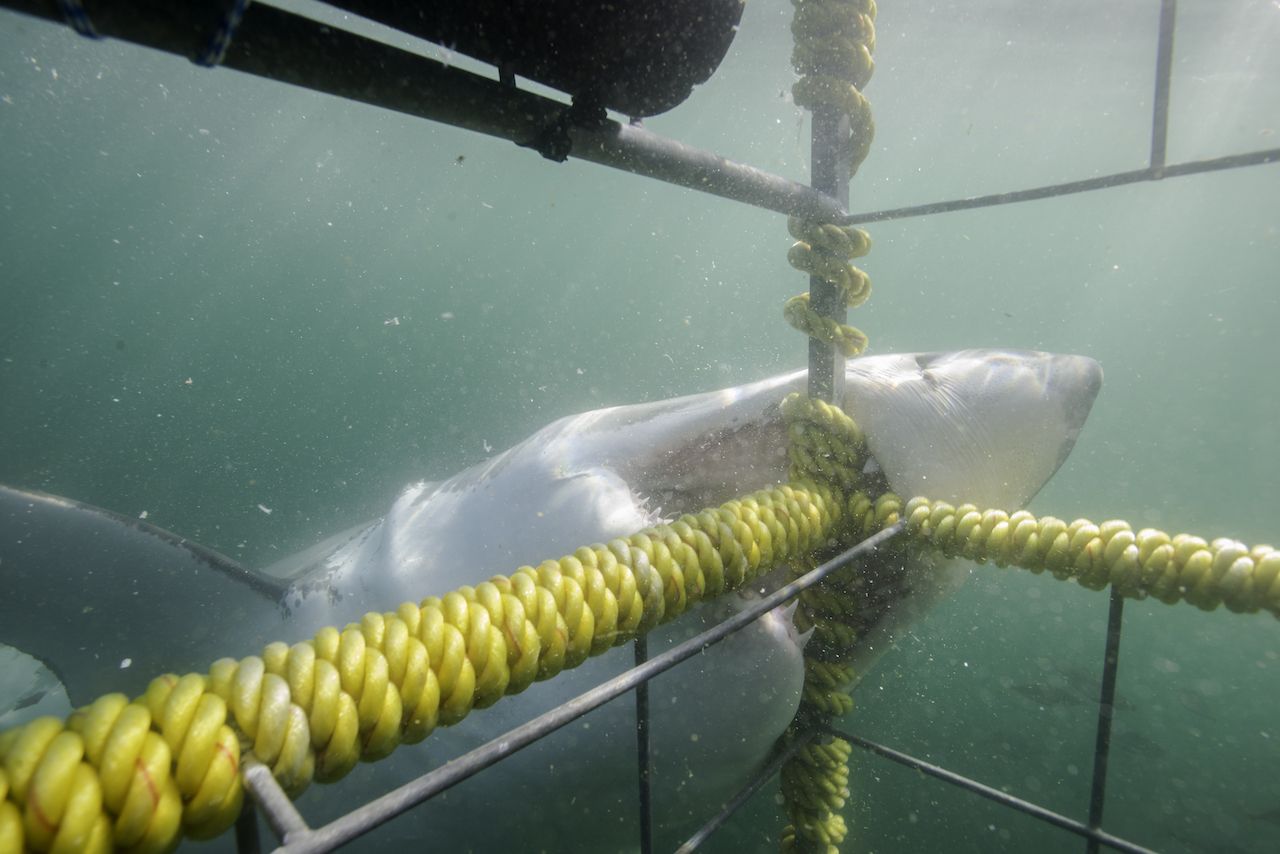 The holy grail of shark diving is a trip underwater with great whites, and nowhere gets you closer to the action than off the coast of South Africa. Be advised, it’s a long morning of sitting in fairly foul-smelling water waiting for the great beasts of the beneath to come rip a seal to shreds. But when you see a great white do its thing, it makes the whole experience worthwhile. Algoa Bay and Gansbaai are popular places to see great whites with a number of reputable outfits running trips. Topdeck Travel also runs a tour through Cape Town and Lesotho that includes this experience. 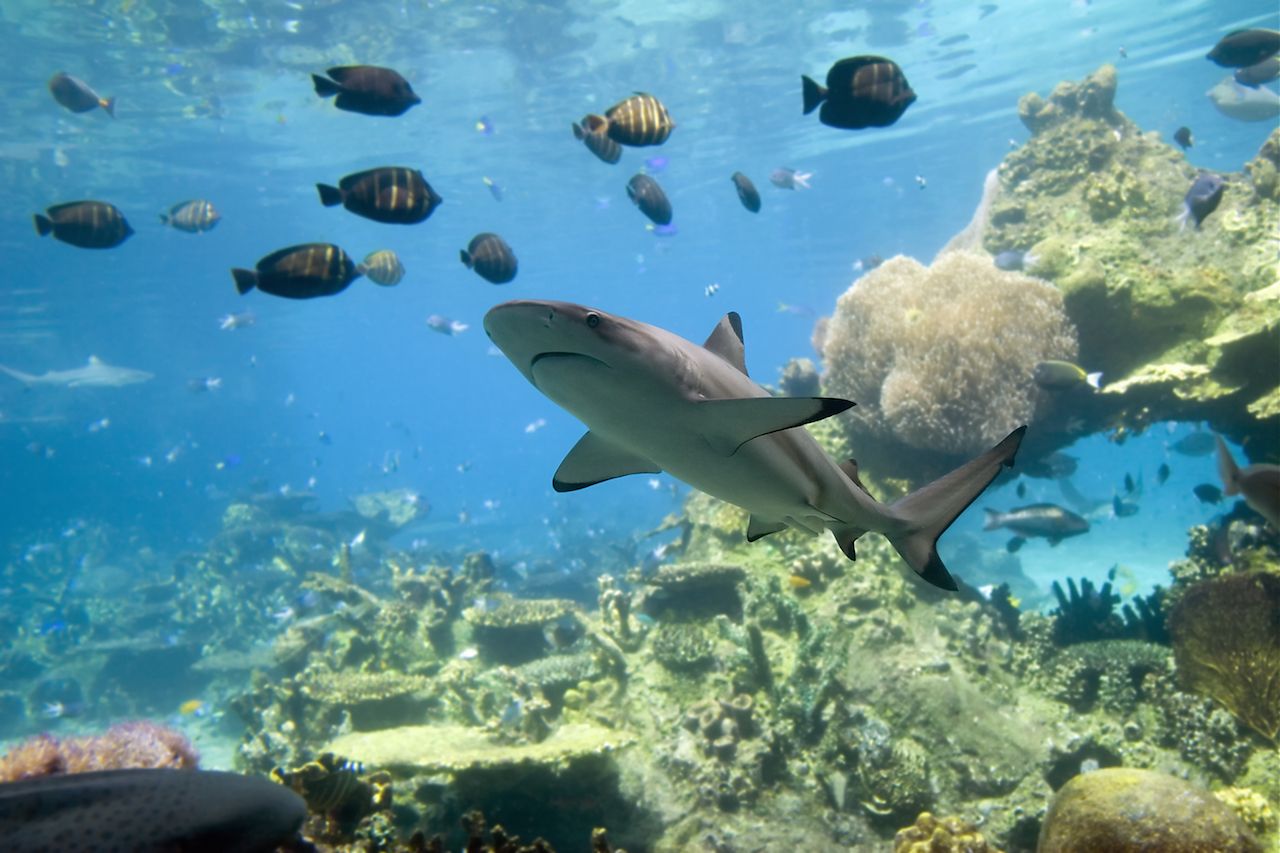 Grey reef sharks rip up fish almost as violently as great whites, and the best place to witness their intense attacks is around Australia’s Great Barrier Reef. If you’re really into it, various companies offer multi-day boat trips out into the Coral Sea, so you can spend all day underwater watching grey reef sharks attack pre-cut fish heads. They generally leave people alone, making this one of the safer ways to witness this feeding frenzy. 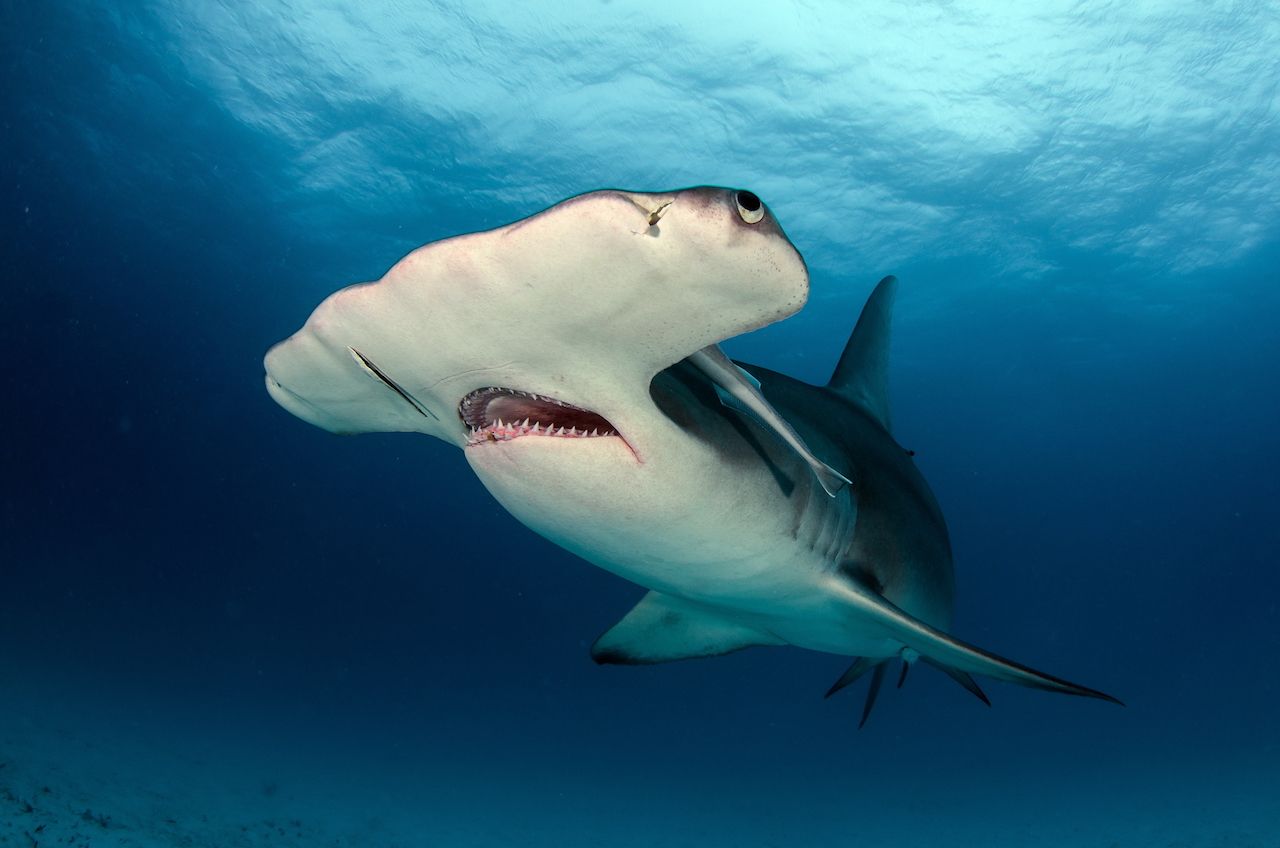 Though Bali can skew a little touristy, under the water everything feels remote. At Manta Point, in addition to the rays for which the area is named, you’ll be diving with hammerheads and reef sharks. You won’t see quite the variety of sharks on the islands of Nusa Lembongan, Nusa Penida, and Ceningan, but they are far more abundant. The aforementioned Topdeck Travel also runs a Bali island-hopping tour that takes you to them all. 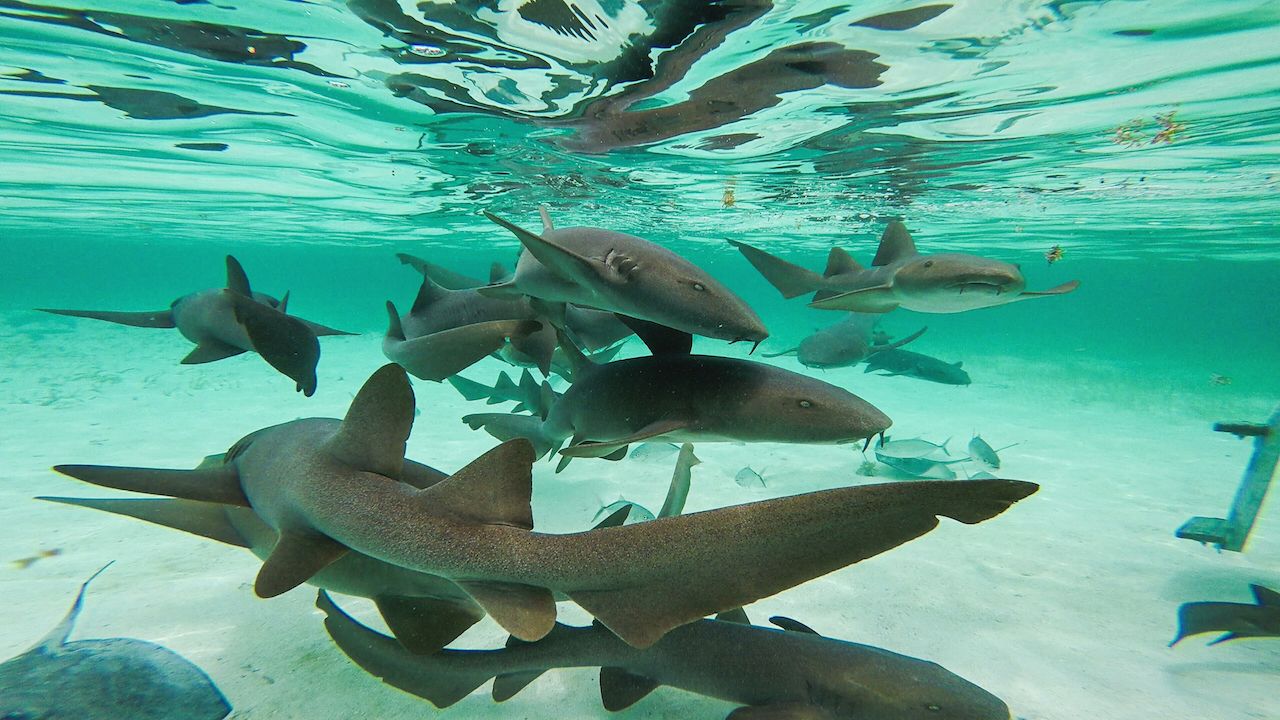 This spot, better known as “Shark Ray Alley,” is the sharking equivalent of Stingray City in Grand Cayman, where schools of nurse sharks seem like they were almost placed artificially because there’s so many in such a small area. Nurse sharks are probably the easiest to dive among and have little interest in anything that’s not a fish, so you’re still safe with that many around. It’s also one of the cheaper shark experiences you can have as spots like Amigos Del Mar run half-day trips for $40. 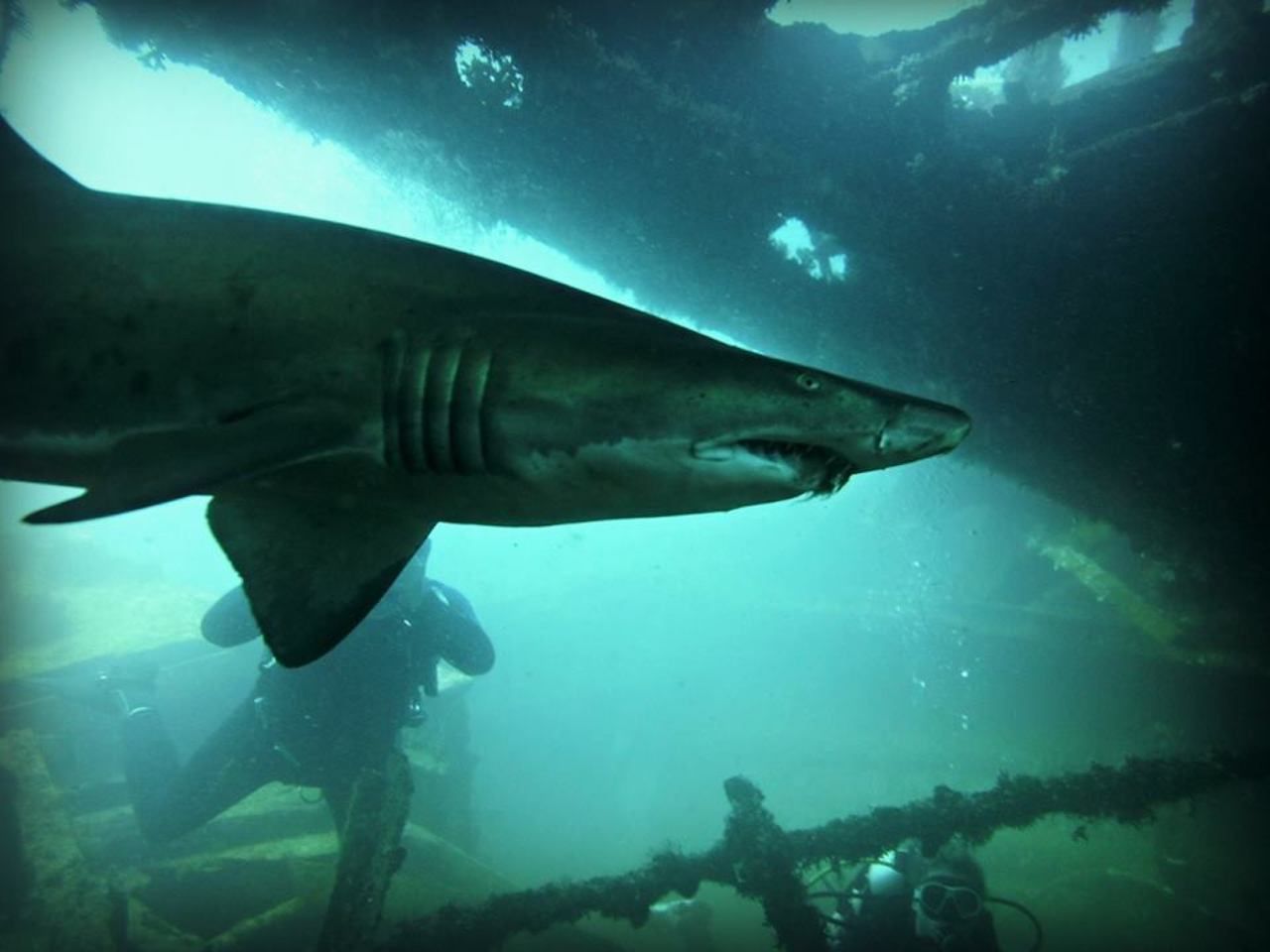 Though North Carolina surely sticks out among tropical destinations like Bali and Mexico, it’s one of the most underrated diving spots in the world. That’s because diving in Morehead City is a two-for-one diving experience — the spots you’re most likely to see Sand Tigers are around sunken ships. That’s right, wrecks and sharks! It’s also the most convenient place to shark dive if you live in the contiguous United States, and though these big boys can get as long as 10 feet and weigh near 200 pounds, they’ve never killed a person. Olympus Dive Center does a number of wreck dives here with two tanks for $130. 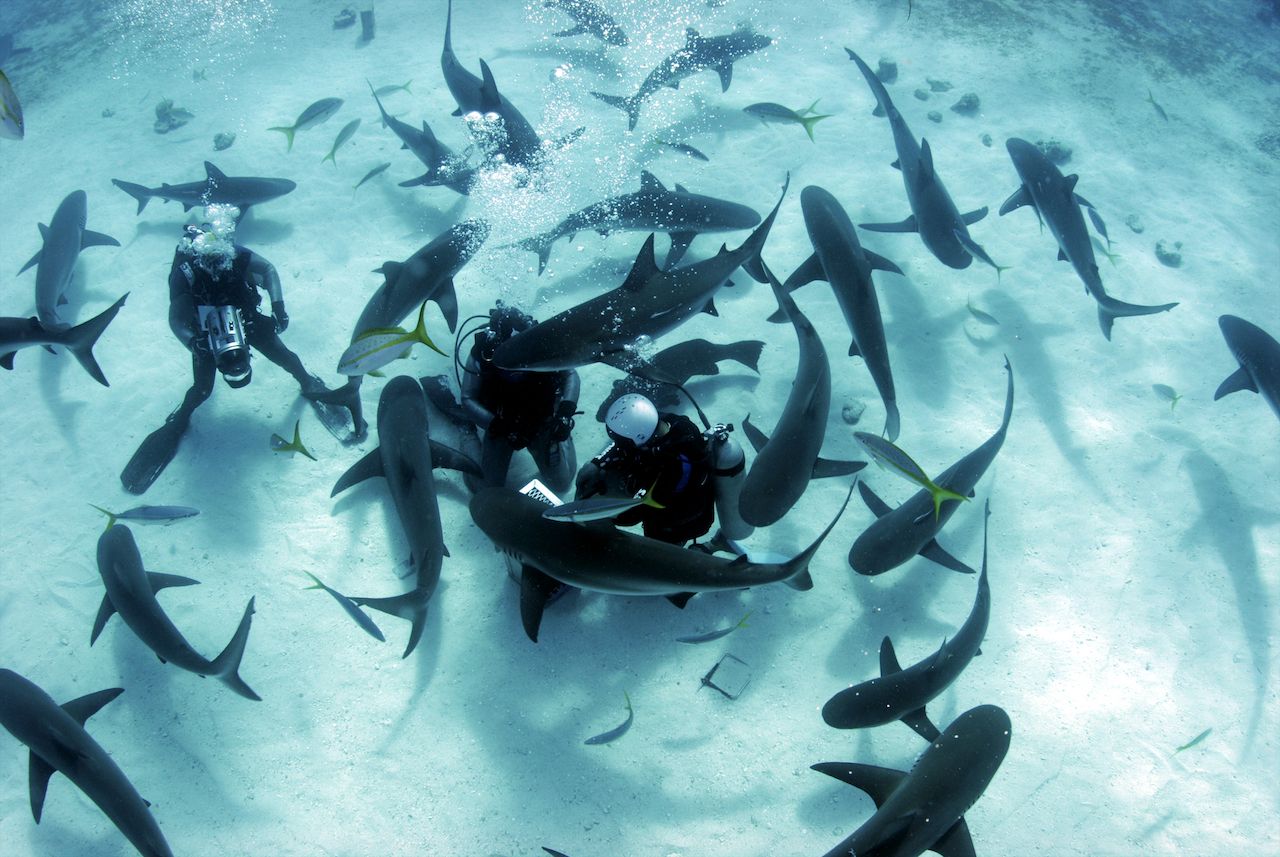 Sharks swim pretty much everywhere in the Bahamas, but some spots like Exuma, Grand Bahama, and Bimini offer better experiences than others through the islands. If you’re looking to cage dive with hammerheads and bull sharks, head to Tiger Beach in Grand Bahama or Bimini where Cage Diver offers trips down that don’t require a SCUBA certification. Or you can head to Exuma and Shark Reef where you’ll swim freely with Caribbean reef sharks at only about 35-feet down. 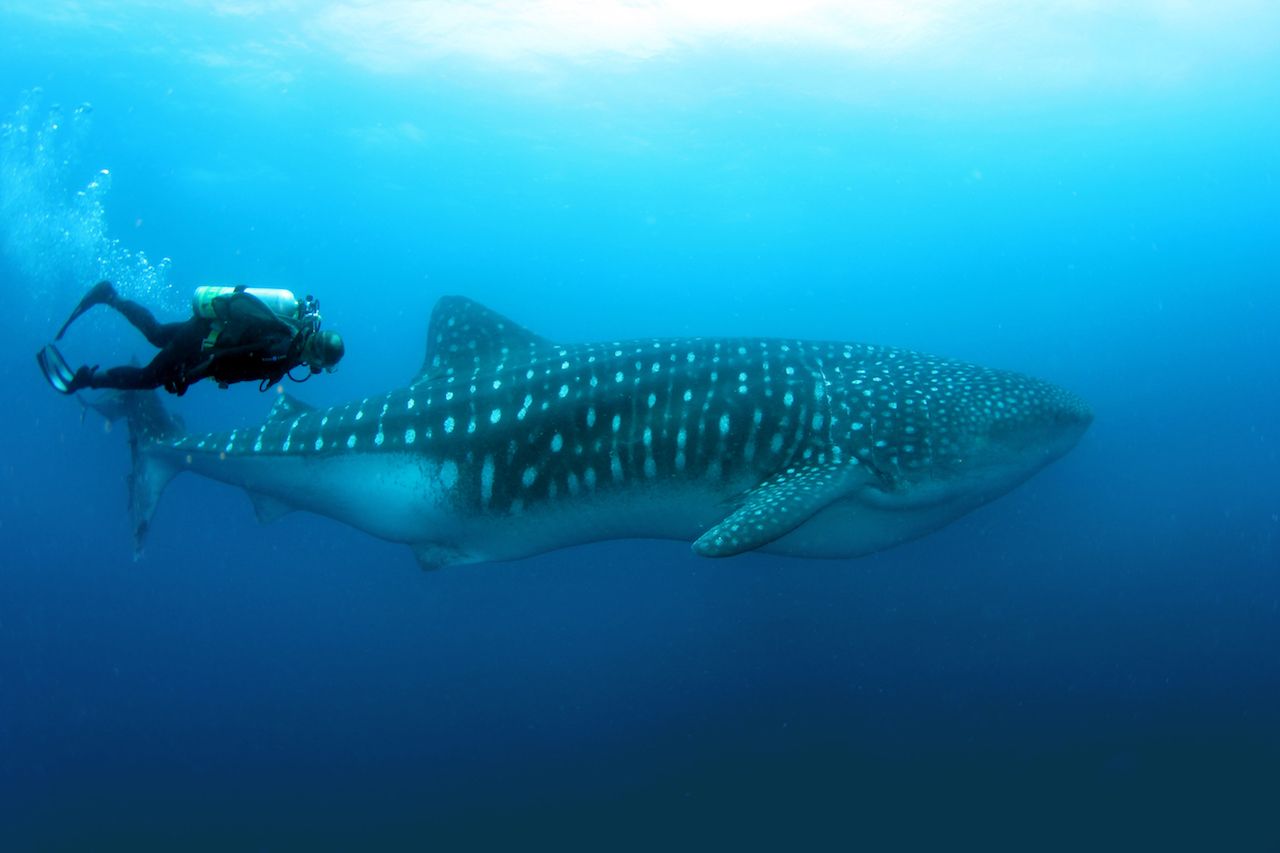 There’s more than just turtles in the Galapagos. Near Wolf and Darwin Islands, scalloped hammerheads swim in packs of 100 or more, and though you’re never guaranteed to see any, spotting a school is one of the most spectacular sights in diving. If you can get yourself to the Galapagos, Caradonna Dive Adventures has been at it a while and gives you your best shot.

DivingHow To Go SCUBA Diving Without Being Certified
Tagged
Beaches and Islands Diving Wildlife
What did you think of this story?
Meh
Good
Awesome