Hawaii is well known for its picturesque views. Just flying into Honolulu during daylight hours offers a stunning vista and, on land, you’ll marvel at everything around you, from swaying palm trees to the endlessly blue horizon. Yet, some places on Oahu, Hawaii’s gathering place, are a little more special than others. A short drive, moderate hike, or catamaran ride will reward you with those million-dollar views Hawaii is famous for. These are the spots where you’ll find the best views in Oahu. 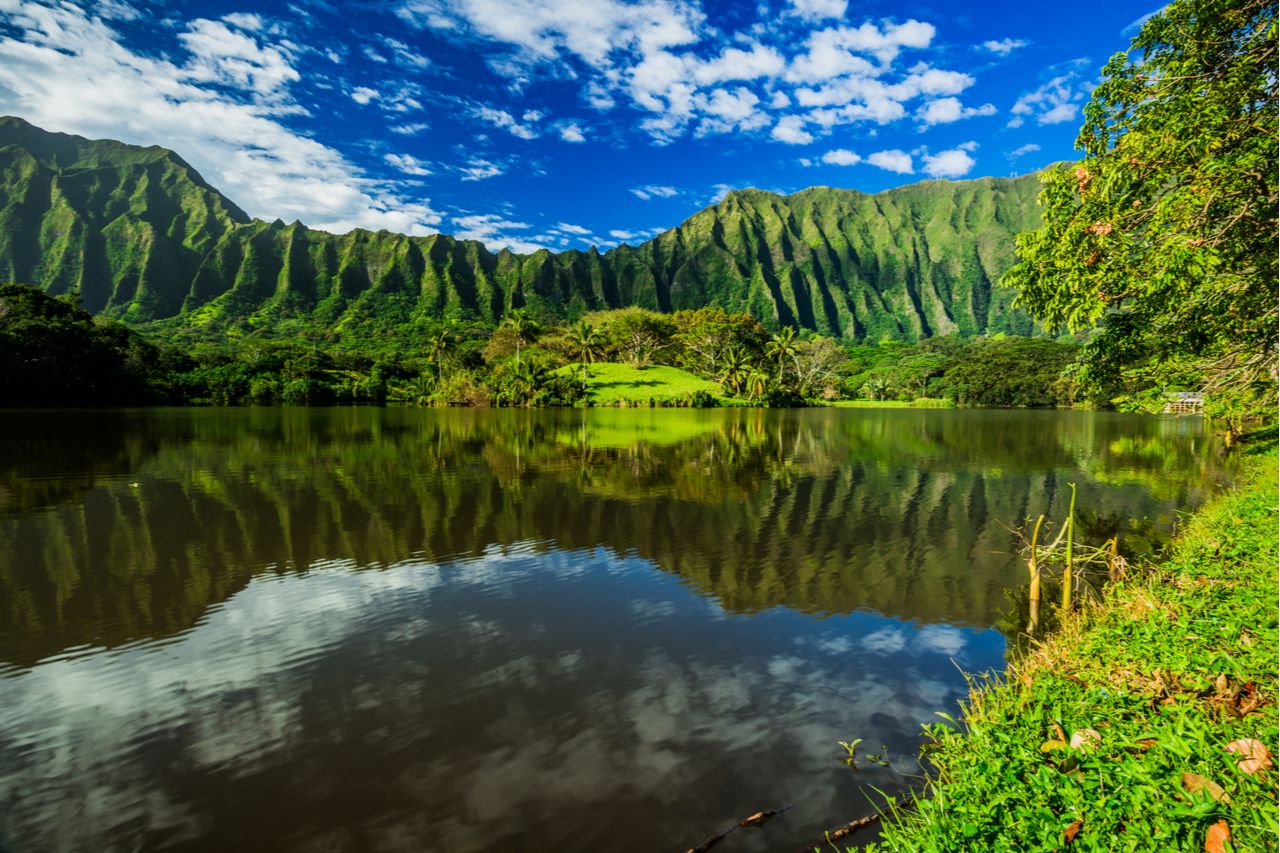 If you stop to consider Hawaii for more than its sandy beaches, you’ll realize its mountains are just as brag-worthy. Verdant vistas and craggy, lush mountains serve as the backdrop of Ho’omaluhia Botanical Garden. Located on the eastern, rainier side of the island, where trade winds deposit rain clouds that linger and create perfect conditions for lush foliage, windward Oahu is home to some of the most dramatic landscapes Hawaii has to offer.

Ho’omaluhia means “peaceful refuge,” and walking or driving deep into the park’s confines reveals why. You’ll find many tropical plantings and flowers, a pond full of native Hawaiian fish and visiting birds, and even a camping area. The Ko’olau Mountain range flanks the edge of the park, making you swear you just landed on the set of Jurassic Park. 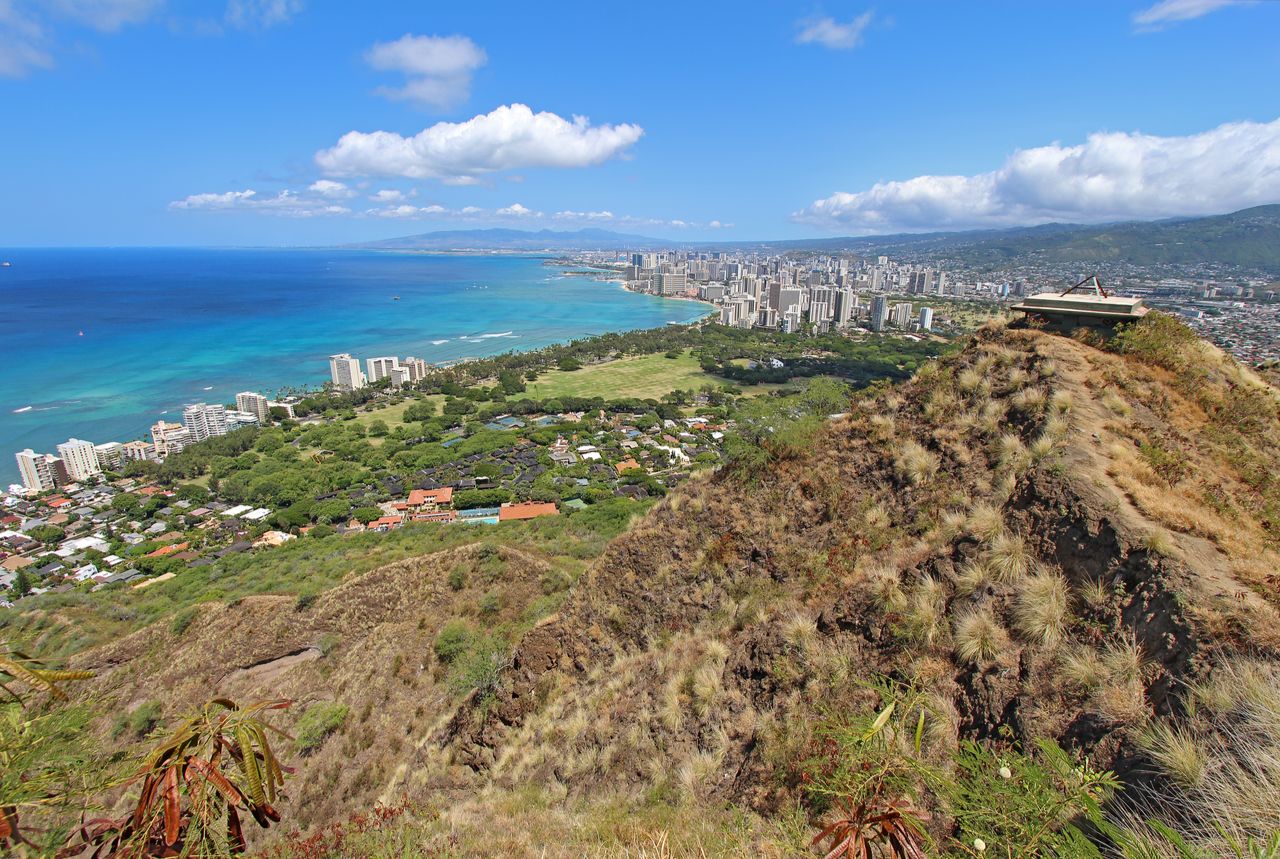 You can find one of the best sweeping views of Waikiki and urban Honolulu hiking to the top of Diamond Head State Monument. Anyone staying on the island can immediately identify Diamond Head, Oahu’s 300,000-year-old volcanic crater, in the distance, but hiking to the top gives you a different angle to cherish.

While the hike from the trailhead to the summit is just shy of a mile, don’t let the length fool you. The ascent is steep, featuring switchbacks, stairs, and even a journey through a narrow tunnel. Once you get to the top, though, your payoff is cool ocean breezes and a view of Waikiki that spans all the way down Oahu’s south shore. Before heading back to your car, don’t forget to take in East Oahu, noting Koko Head Crater in the distance. 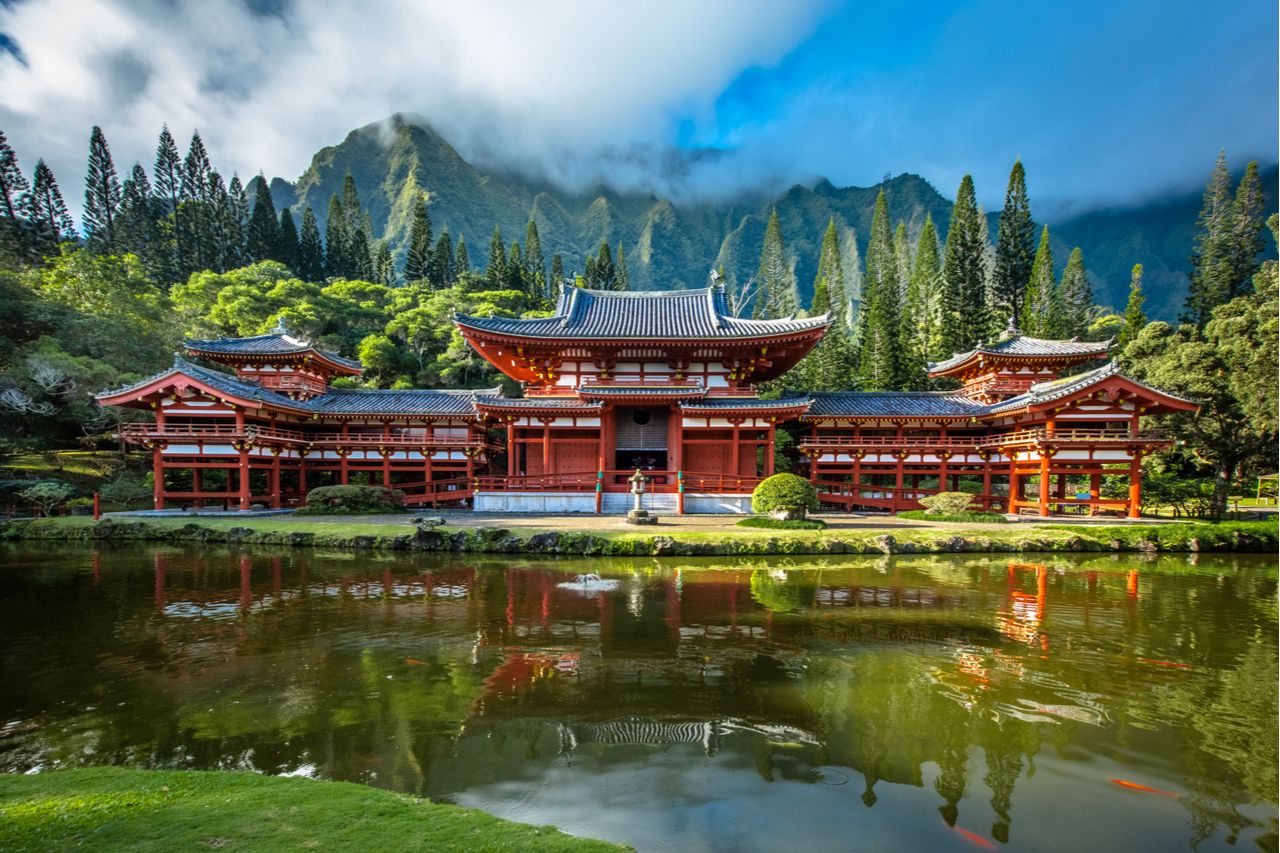 If you need to get away from the hustle and bustle of Waikiki, find respite at Byodo-In Temple, a non-practicing Buddhist temple in Kahaluu, Oahu. The temple was built in 1968 and is a smaller-scale replica of the 950-year-old Byodo-In Temple in Uji, Japan. Flanked against the majestic Ko’olau Mountains, a visit to the temple allows you to see Amida, the nine-foot-tall golden Buddha. You can also ring the Sacred Bell to ward off evil spirits and practice your photography skills at the pond, which is home to hundreds of colorful koi fish. 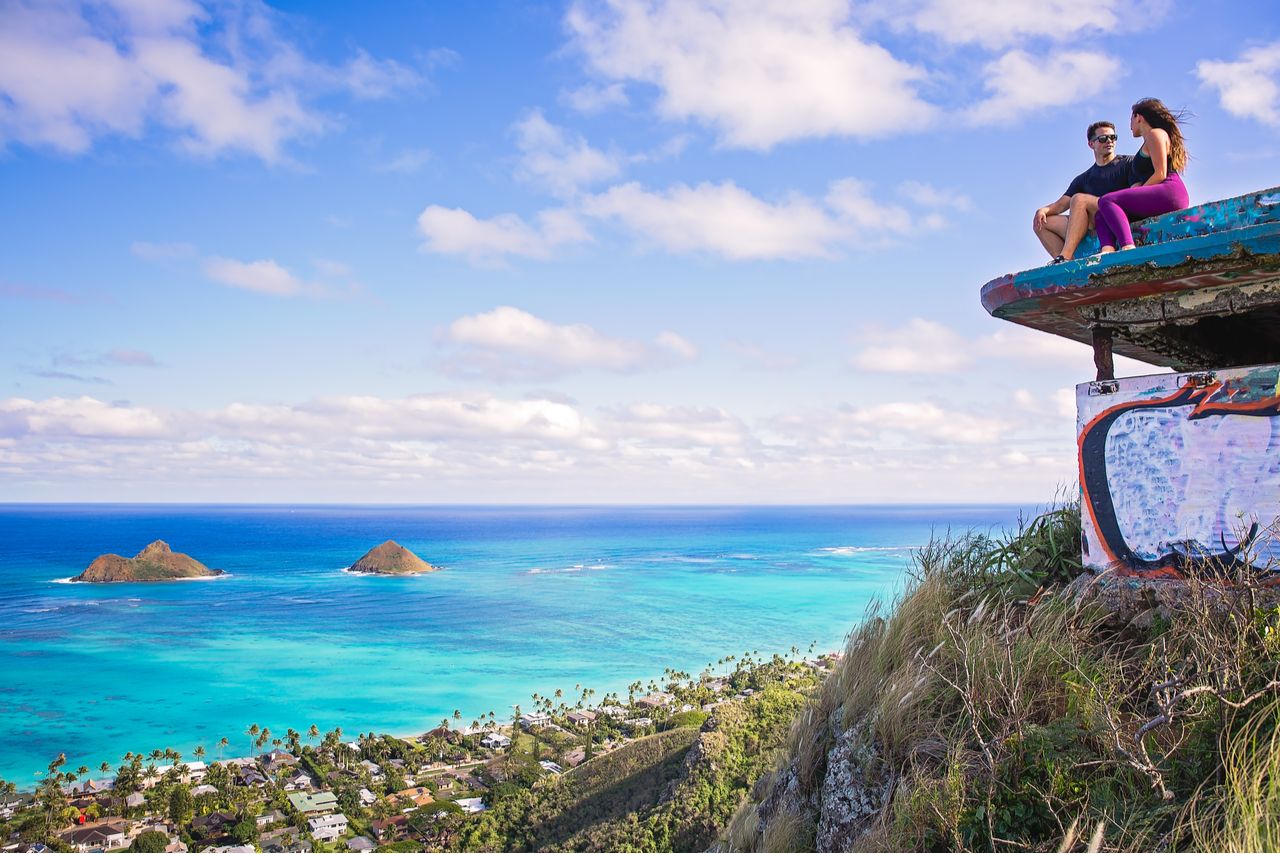 Kaiwa Ridge, or Lanikai Pillbox Hike, is a popular trail that ascends just above renowned Lanikai Beach in Kailua. Hikers who make it to the top can marvel at the deep blue waters and offshore islands, the “Mokes,” as well as Lanikai Beach, Kaneohe Bay, Chinaman’s Hat, and Waimanalo. The beginning section of the hike is the steepest, but as the trail is primarily unshaded, you’ll be too busy taking in the sights to notice your increased heart rate. About 20 minutes up, you’ll reach the first military pillbox bunker, an excellent place for a photo opp or water break. The second pillbox follows shortly after that, and from there, you’ll enjoy a 360-degree vista of the windward coast and more of the best views in Oahu. 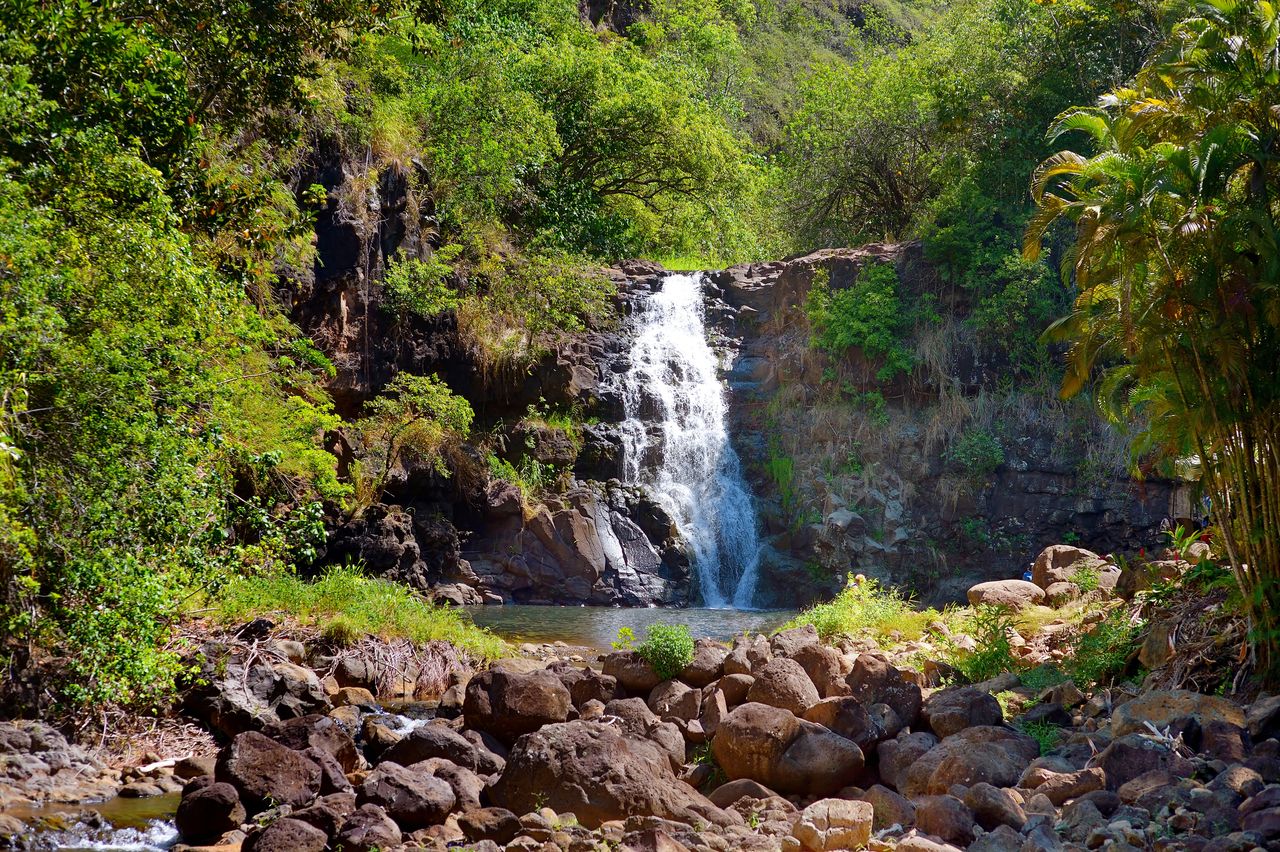 Imagine a flourishing glen full of tropical foliage, waterfalls, and native wildlife, and you can start to wrap your head around how gorgeous Waimea Valley is. Located on Oahu’s North Shore, Waimea Valley is a historically and culturally significant site to Native Hawaiians, as the area was awarded to Kahuna Nui (High Priests) in 1092 A.D. As such, Waimea Valley is known as “The Valley of The Priests.”

The valley is home to a botanical garden with over 5,000 types of plants, including endangered species. Cultural sites like Hale O Lono (a heiau, or religious place of worship) are worth a stop, as well as several Hawaiian hales (houses) that were re-constructed using traditional techniques. Your goal is a 40-foot waterfall at the end of the walking path, where swimming is allowed. Freshwater is considered sacred to Hawaiian people, so don’t be surprised if you come out feeling completely refreshed and recharged. 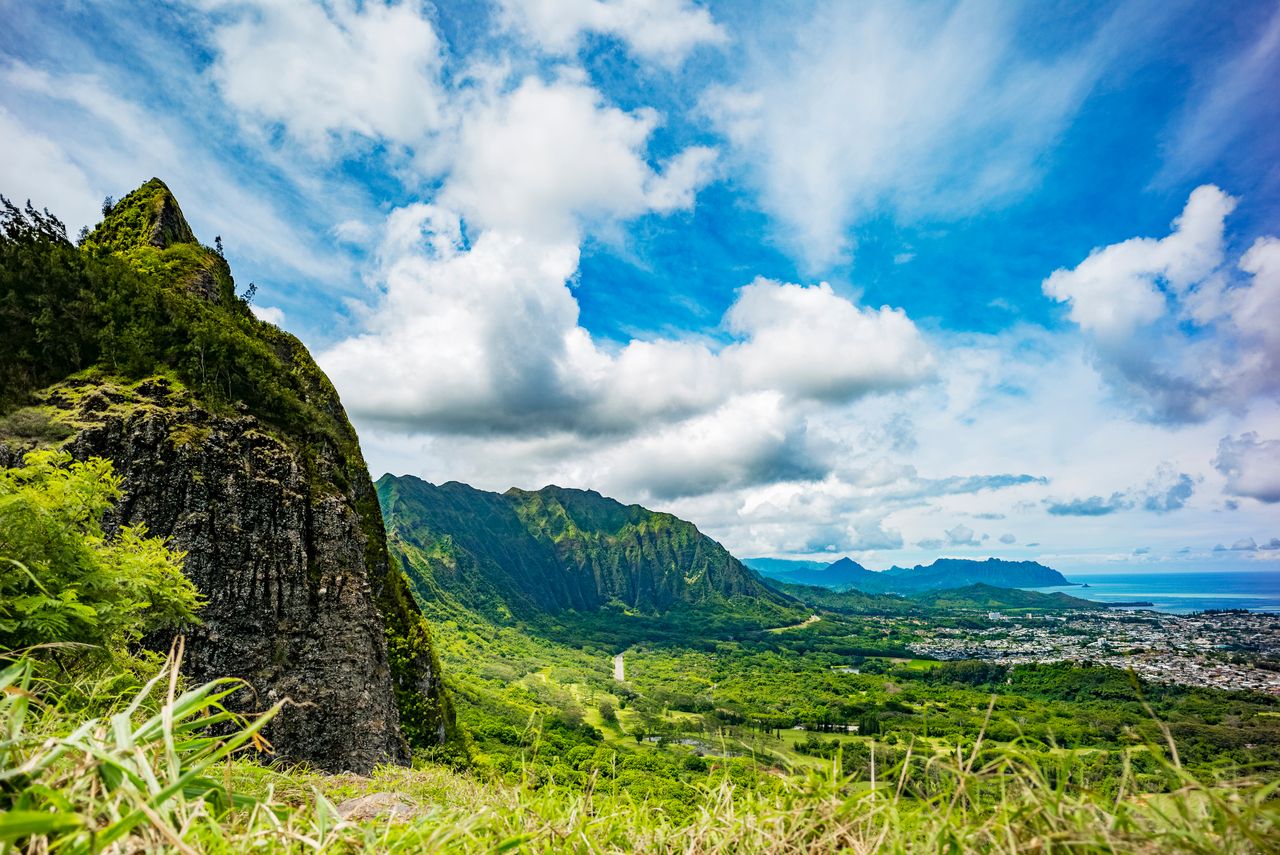 You’ll hardly believe your eyes when you pull off at Pali Lookout, a viewpoint in Nu’uanu Valley overlooking the windward coast of Oahu. At 1,200 feet elevation on the pali (cliff) of the Ko’olau Mountain range is where you can drink in the panorama, complete with mountains, valleys, farms, streams, and the ocean. This was once the site of the Battle of Nu’uanu, where King Kamehameha conquered the island of Oahu in one of the bloodiest battles in history. Now it’s home to not just some of the best views in Oahu, but an easy and breezy lookout from which to savor them — emphasis on breezy. Trade winds are felt so strongly here that you can “lean into” the wind without falling over. 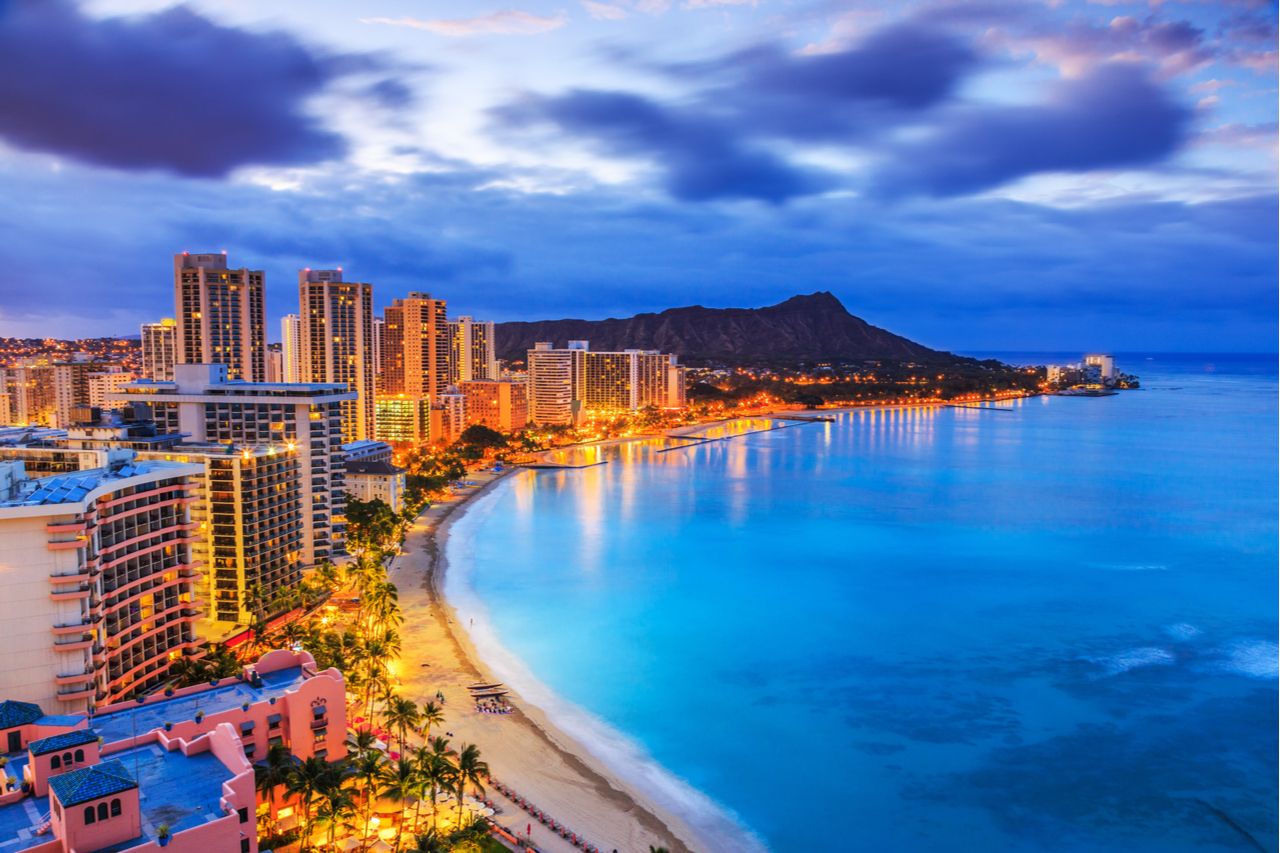 It’s easy to get lost in a trance looking out into the Pacific from Waikiki’s white-sand beaches, especially because it’s blue as far as the eye can see. Yet spend an afternoon on a boat, and you’ll experience Oahu’s south shore in a whole new light. Book a catamaran ride late-in-the afternoon around sunset for the best views. When you’re out at sea, nothing beats looking back at urban Honolulu flanked against striking emerald mountains with the pacific glistening in the foreground. If you’re lucky, you’ll be able to score a sea turtle sighting.

National ParksLittle-Known Places To Get the Most Breathtaking Views in Kauai
Tagged
Beaches and Islands National Parks Hawaii, United States
What did you think of this story?
Meh
Good
Awesome