Wine vacations aren’t nearly as bougie or costly as they sound. Today, you can find wine around the world that tastes good and is affordable — especially when you go to the winery itself. It doesn’t hurt that literally every state in the nation has a wine region now, so there’s plenty to choose from. Napa can get by on its name, everyone else has to vie for wine tourism dollars in other ways.

This makes you, the wine-drinking tourist, the winner, as everywhere from British Columbia to South America is luring in visitors with rock-bottom prices. Or at least prices that aren’t obscenely jacked up. We conferred with Heath Porter, an advanced sommelier who, in addition to previously heading the wine program at The Greenbrier, currently takes people around the world on his Heathenwinetours. He hipped us to some of the best, low-cost wine destinations in the world that will be worth hitting this summer. Though some might cost a bit to get there, all are a great value once you’re on the ground. 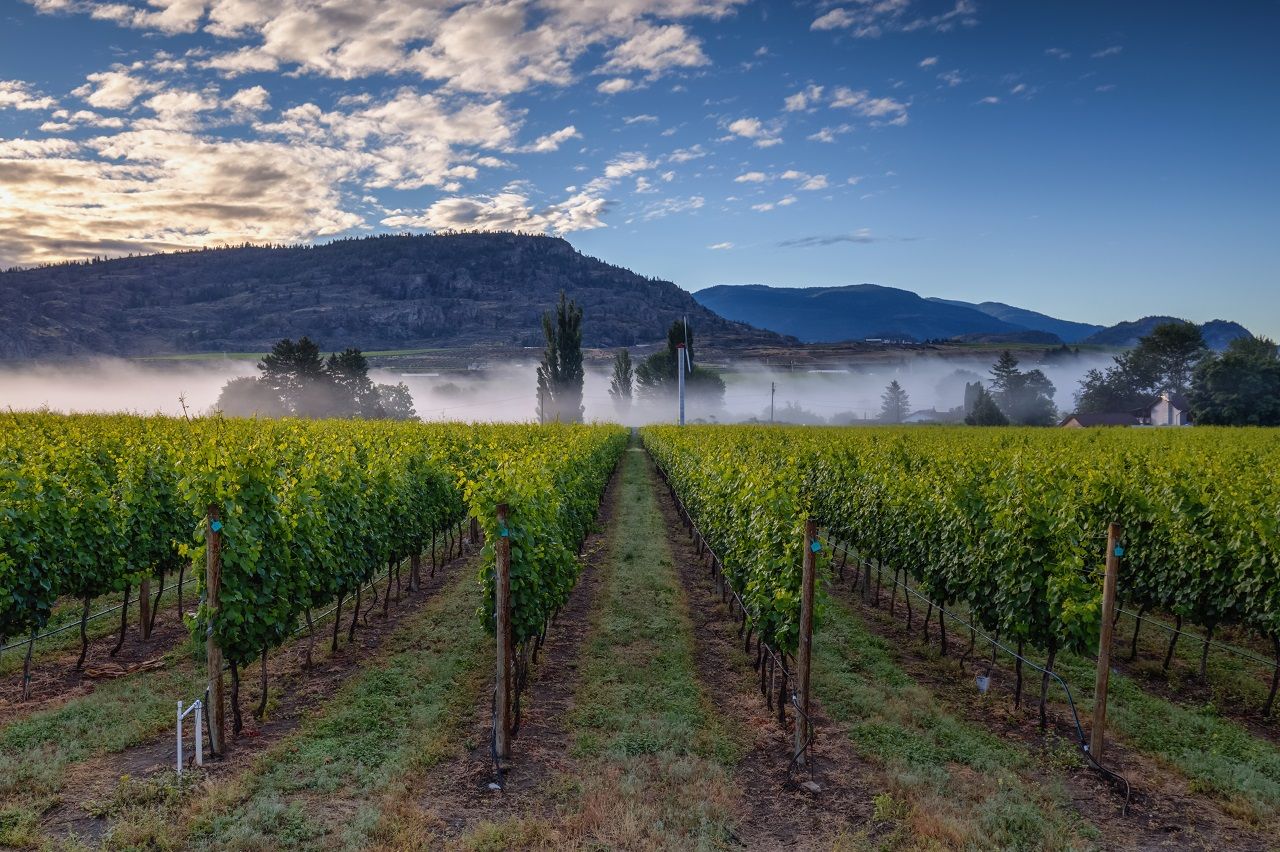 Not that British Columbia is ever lacking for credit for its spectacular scenery, but one area Americans don’t hear a lot about is the Okanogan Valley, just north of central Washington State. A few miles north of the crossing, you’ll happen upon one of the most spectacular wine regions in the world, where the towering Cascade and Columbia mountains contain a lush valley ripe with vineyards, restaurants, and reasonably priced hotels.

Wineries are set mostly on the sides of the mountains, so you can begin the day in full sun at Road 13 then enjoy sunset at Burrowing Owl on the opposite side of the valley. In between you can hit spots like Rustico Farms and Cellars, a western-themed winery. And Church and State, which boasts wines with clever — and sometimes profane — labels. Tastings are rarely over $9. Dinners and the winery restaurants won’t run you much over $40 a person. All that, and you can burn off all the calories, if you like, over 12-mile Osoyoos Lake.

Once you’ve managed to get there, Chile is one of the great wine-value destinations in the world, where full steak dinners cost less than $30 and gourmet barbecues with full wine tastings are about $75. You’ll find said barbecue at Vina San Pedro, near the town of Requinoa. Here you’ll visit a sprawling estate at the base of the mountains, where daytime meals are filled with hearty grilled meats and wine, and evening meals are held in a dining space with views over the valley.

Carmenere and cabernet sauvignon are the region’s best grapes, and you’ll find great wines made with those two grape styles throughout the valley at spots like Vina Anakena, Chateau Los Boldos, and Vina Chateau. Tastings won’t run much over $10, with bottles in the $20 range. When you’re hungry, head to Vina Montes, where Frances Mallmann helms Fuegos de Apalta, a restaurant that feels almost as if you’re eating in the middle of the vineyard. This part of the trip isn’t cheap, and you’ll likely drop about $75 a meal. But compared to any Mallmann spot in the US, it’s still a bargain. 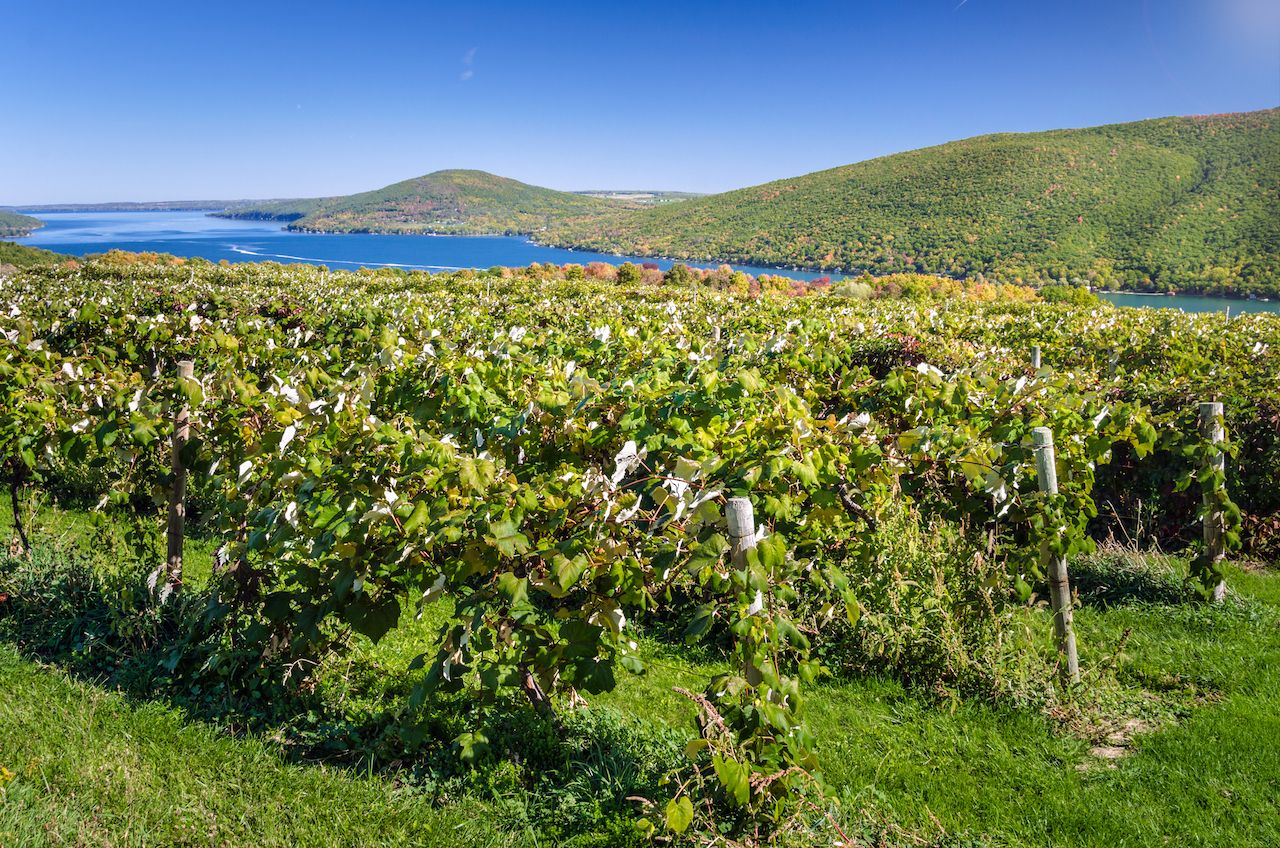 It’s not much of a secret that the Finger Lakes have become one of the top wine destinations in the Northeast over the past half-decade or so. But the flocks of urbanites heading to western New York aren’t just following a trend; the fall colors and massive gorges of the region are worth visiting with or without wine. But with great juice flowing, it makes the trip all the more enticing.

Far beyond the stereotypical ice wine found in cold climates, producers in the Finger Lakes make outstanding pinot noir at both Element and Hearts and Hands Wine Company. If you’re more into the bubbly stuff, Porter suggested checking out Red Tail Ridge, or go for the tasting at Kemmeter, which he said “might change your life about riesling.” When it’s time to eat, head to Dano’s Heuriger in Lodi, which serves Viennese wine-inspired food using wines from the area. Or the FLX Wienery in Dundee, where the “high end, low brow food” has $7 burgers and almost nothing over $13.

We’ll just get this out of the way now…nothing, we mean nothing, in Silicon Valley should ever be referred to as “cheap.” But if you’re in the Bay Area on vacation and want to go wine tasting, your nearest, closest value is just outside San Jose in Apple’s hometown of Cupertino. Here, you can visit the famous Ridge Vineyards, which sits on a hilltop in the Santa Cruz Mountains overlooking the valley and Apple’s spaceship headquarters. If you’re not trying to taste the legendary Monte Bello, you can do a tasting for $10 and bring a bottle home for under $25.

Further down the mountain in Los Altos, stop by Testarossa, a far more laid-back experience than Ridge with a sunny front patio and a cool, castle-like tasting room. Housed in the old Novitiate Winery that dates back to 1888, this one-time Jesuit winery produced church wines in a gravity flow system that’s still in use today. And the historic old stone structure is the fourth-oldest continuously operating winery in California. After a few drinks here head into downtown Los Gatos to The Bywater, the best New Orleans-style food you’re going to get outside the southeast. 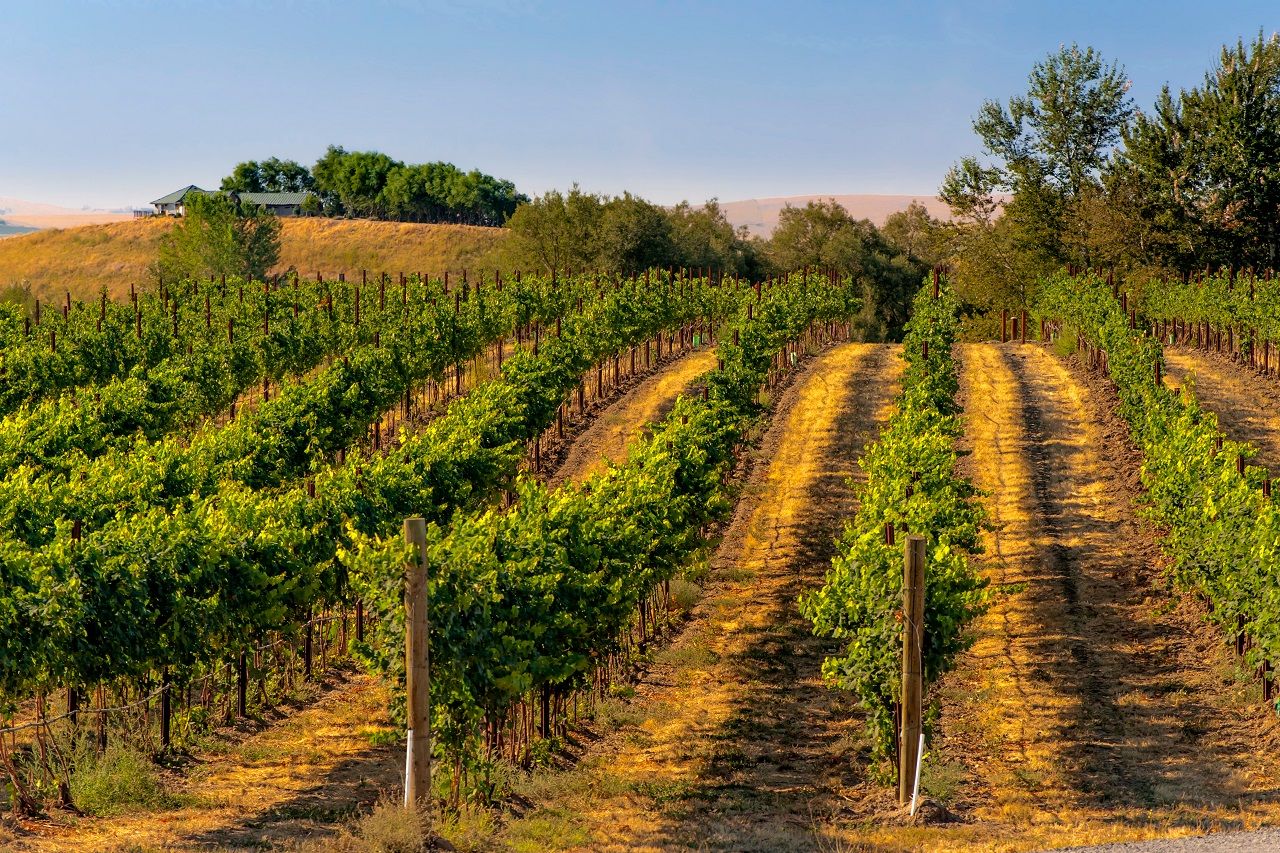 Though Walla Walla has gracefully raised itself from prison town to wine destination, it still hasn’t priced out regular people. The region has been making wine for nearly 150 years, but didn’t get much commercial recognition until the 1970s, when Leonetti Cellar opened its doors. In the years since the region has birthed acclaimed wineries like Seven Hills, L’Ecole No. 41, and Saviah Cellars.

Wine fame or not, this is still an agricultural town, which means it retains its country vibe from the newly refurbished main street to the dusty roads that lead out to the vineyards. This also means you’ll be able to get loads of farm-fresh food here at spots like Frog Hollow Farm, a produce stand and restaurant that fuses both masterfully. Though if you’re looking to pair your wine with a first-rate cut of beef, make sure you plan a meal at the Walla Walla Steak Company.

Ask anyone who’s been to Niagara Falls, and they’ll almost universally tell you to go to the Canadian side. Partly because the views are better and there’s stuff like jet boat rides and a brewery. But also because once you get away from the Falls, you’re in one of the better wine regions in the Northeast. If the weather is cooperating, you can take a bike through the relatively flat vineyards to Hidden Bench and Big Head wineries, where $15 bottles of pinot noir taste like they should cost about twice that.

When it’s time to eat, stop into Niagara-on-the-lake, where you’ll not only get plenty of those aforementioned jet boat rides but also fantastic winery food at Trius or Peller Estates. Then, if you feel like mixing alcohols, head out on the Niagara Ale Trail and visit some of the region’s breweries. Even if you’re not a big drinker this region is a great value, combining a trip to a world landmark and wine tasting in one perfect weekend. 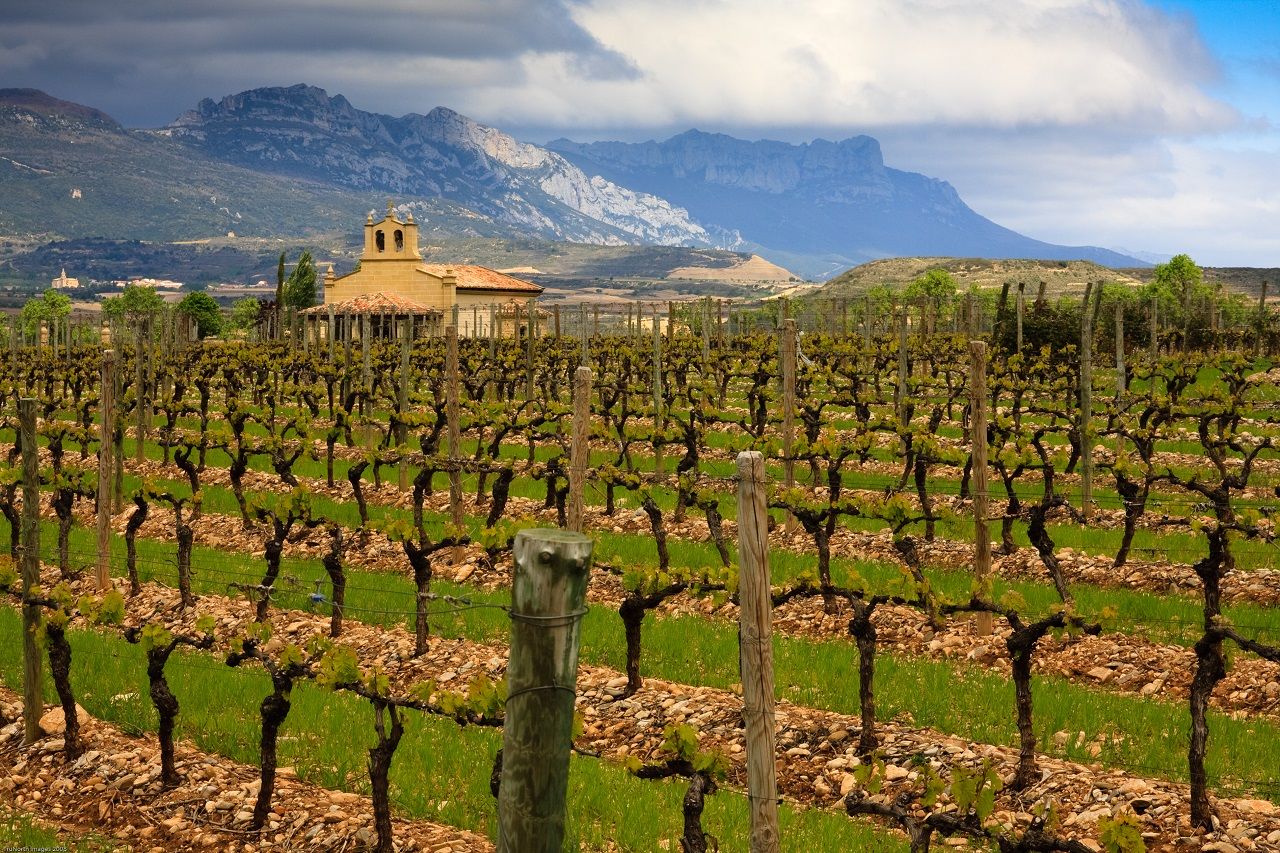 The Rioja wine region of Spain has some of the most breathtaking wines and wineries in the world. Case in point: spots like Bodegas LAN, the ultra-modern Bodegas Ysios, and Marques de Riscal.

Rioja’s wineries are unlike any in the world, where you can tour a 19th-century foundational winery at Marques de Murrietta’s Ygay Castle, then down two wines paired with “degustation aperitifs” for about $42. Eating in La Rioja won’t cost you much either, as hopping around the old quarter of Logrono will find you knee-deep in pintxo bars (think tapas, but for northern Spain), where you’ll rarely drop more than a couple of euros on a mini-sandwich.

Insider GuidesThe 7 Most Exciting Places To Travel To Drink Wine in 2019
Tagged
Budget Travel Insider Guides Wine
What did you think of this story?
Meh
Good
Awesome