From the Berlin Wall to the world’s first urban art museum, Berlin is a global hub of outdoor art. Since the 1960s, the city has cultivated a rich and diverse street art scene and, as a result, the entire city has become a colorful playground for both local and international urban artists. Visiting the city, you’ll find street art and graffiti practically everywhere you look. Here are some of the best places to discover street art in Berlin. 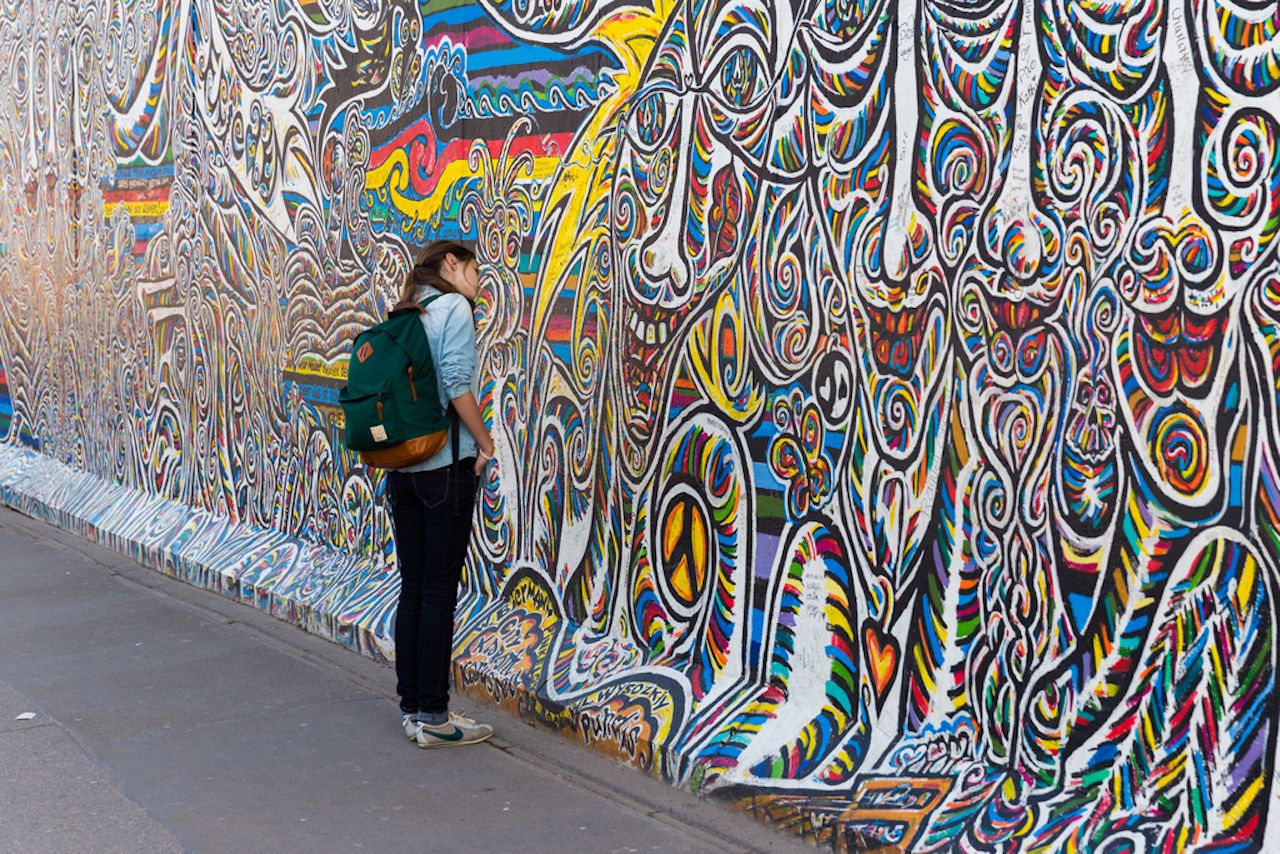 In August of 1961, the East German authorities built a physical barrier to close off East Germans’ access to Berlin and West Germany. The barrier, erected overnight, was built of barbed wire and cinder blocks. But, as time progressed, the East German government developed a more complex security system — complete with concrete walls that were up to 15 feet high, electric fences, and guard towers. The wall itself became a giant canvas for artists and other frustrated West Berliners to express themselves. While the artistic expressions on the west side of the Wall thrived, the east side remained blank.

When the Berlin Wall fell in November of 1989, artists quickly moved into neighborhoods in the eastern part of the city and began transforming these areas into vibrant artistic hubs — Mitte, Friedrichshain, and Prenzlauer Berg, in particular. Around the same time, a large-scale mural project appeared on the remaining pieces of the Berlin Wall. Artists from around the world were invited to paint murals on the Wall’s empty east side as a celebration of reunification and a means of expressing their hopes for a brighter future. This project became known as the East Side Gallery and remains one of the largest open-air galleries in the world today. 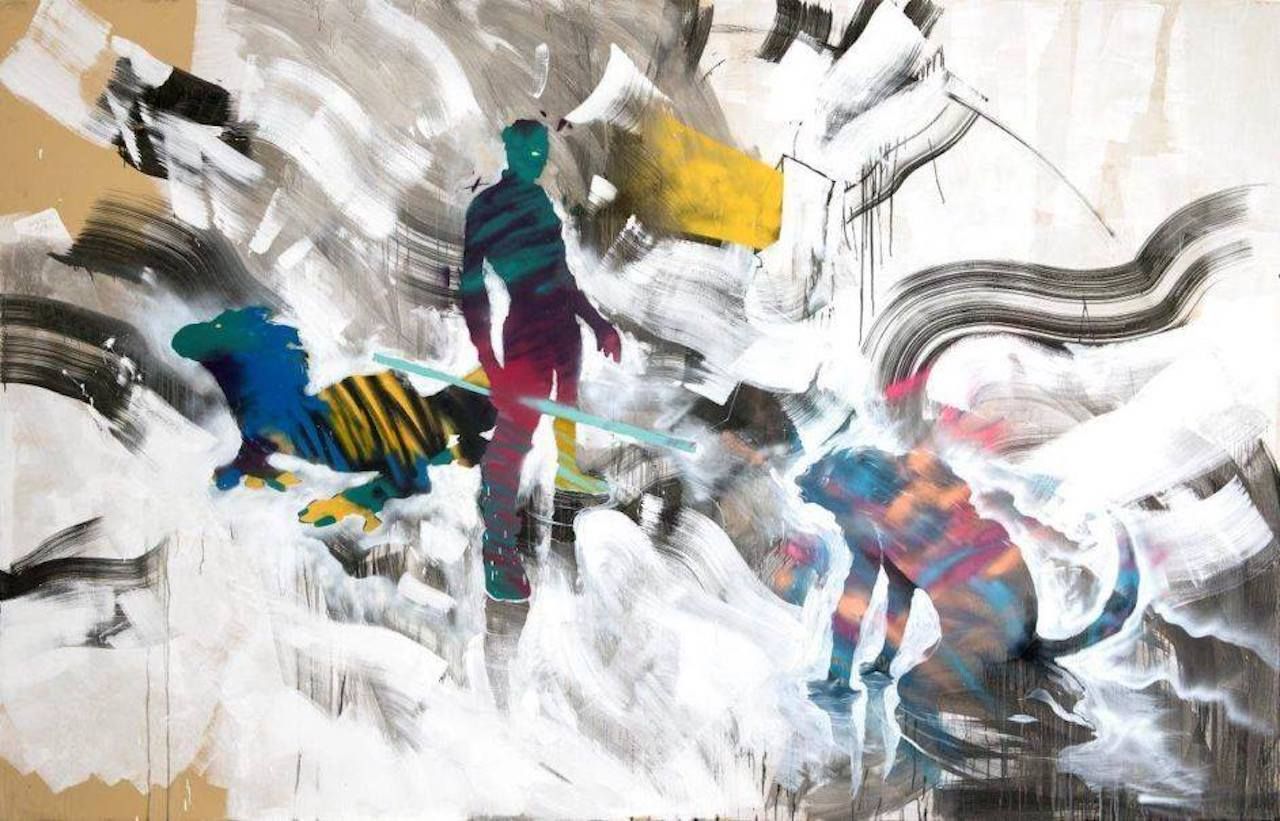 When it opened its doors in 2017, Urban Nation: Museum for Urban Contemporary Art became the only museum in the world dedicated exclusively to urban art. As an international institution, Urban Nation showcases what its name suggests — art, creative projects, and social exchange built around preserving the culture and history of outdoor street art. The museum has already hosted the work of renowned national and international street artists, including JR, Herakut, Fintan Magee, Shepard Fairey, Lora Zombie, and Banksy.

Naturally, the work of the museum extends beyond the gallery’s walls and has incorporated the exterior of the building into the collection, as well as the facades of buildings in the surrounding area. Urban Nation has invited street artists from around the world to adorn the facade of the building with captivating murals that welcome the public into the space. Other artworks appear all along Bülowstrasse, where the museum is located. Some of these walls host meter-high murals, while other surfaces are home to smaller creations that are visible only to the most attentive of observers. 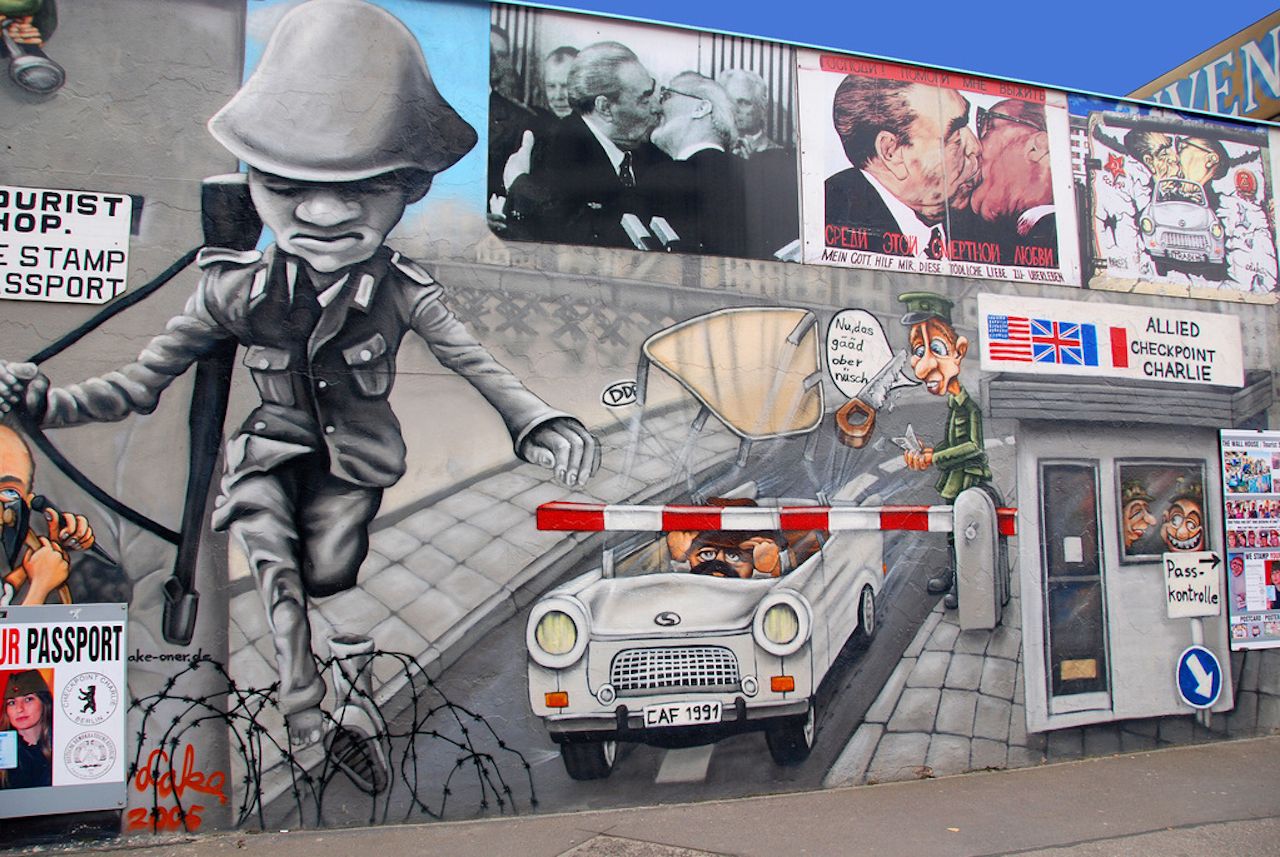 Inside one of the most interesting courtyards in Berlin, you’ll get a taste of the city’s street art diversity. Right next door to the iconic Café Cinema — a dimly lit and lively cafe where filmmakers, artists, and locals have been meeting for decades – you’ll find the entrance to an arcade which is home to Haus Schwarzenberg. Colorful murals, eye-catching graffiti, and thought-provoking paste-ups line every inch of available wall space in this passageway.

You’ll also find several pieces of sculpture art brought to you by Dead Chickens, the Berlin-art group that founded the Monsterkabinett. If you’re up for visiting a surreal, parallel universe, visit their private museum located here and walk through a curated sensory experience.

The nearby Otto Weidt Museum pays tribute to Otto Weidt, a visually impaired German man who helped rescue Jews during the Nazi period by employing and, subsequently, hiding them in his broom and brush making factory. There’s a mural depicting Otto Weidt himself immediately outside of the entrance to the museum. 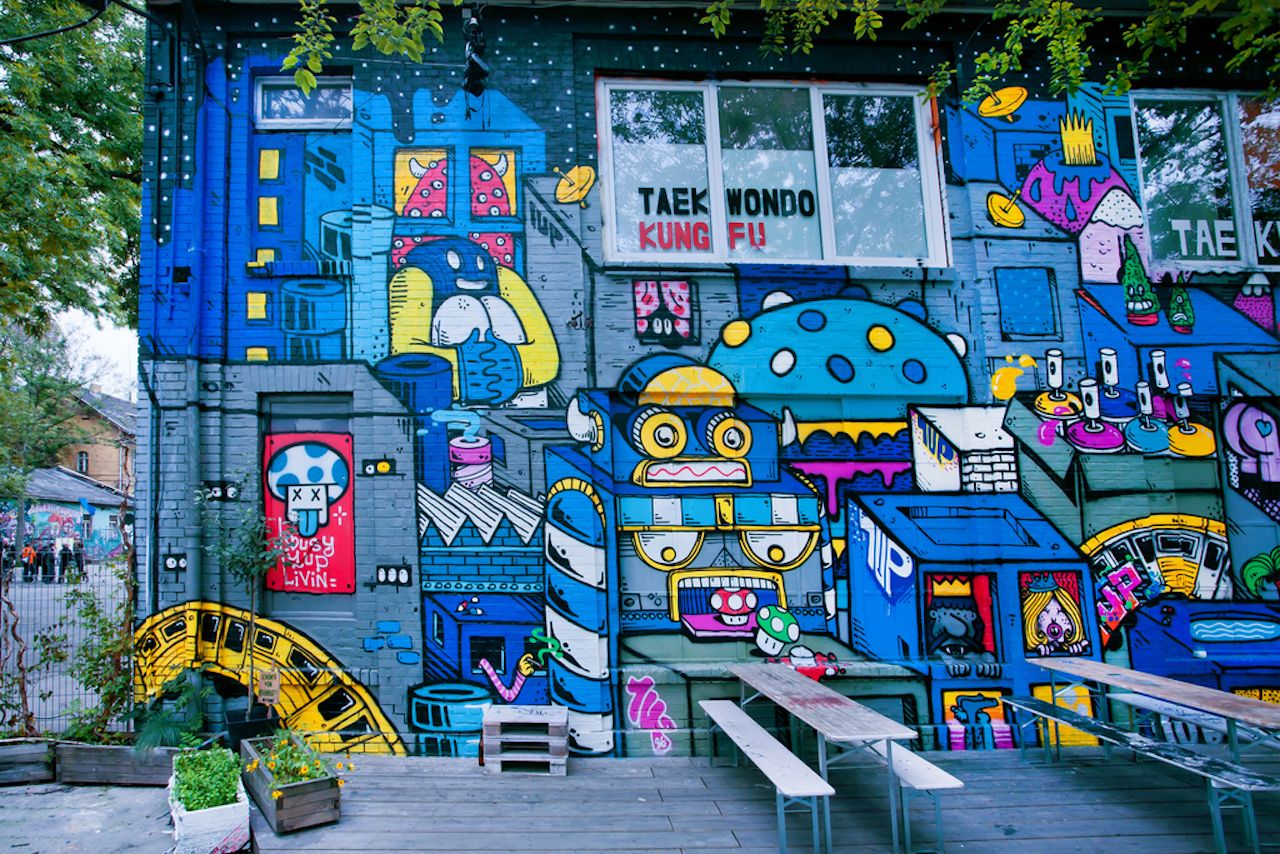 If you walk along the train tracks on Dircksenstrasse from Hackescher Markt until Alexanderplatz, you’ll discover a wide array of street art creations by both unknown and famous artists along a roughly half-mile stretch of wall. Remember when we noted the diversity of the art earlier? Well, the art displayed here covers a wide range of mediums, including paste-ups, poster art, sculptures, sticker art, graffiti, and stencil art. The street art landscape here also changes quickly so you can always expect to find something new. 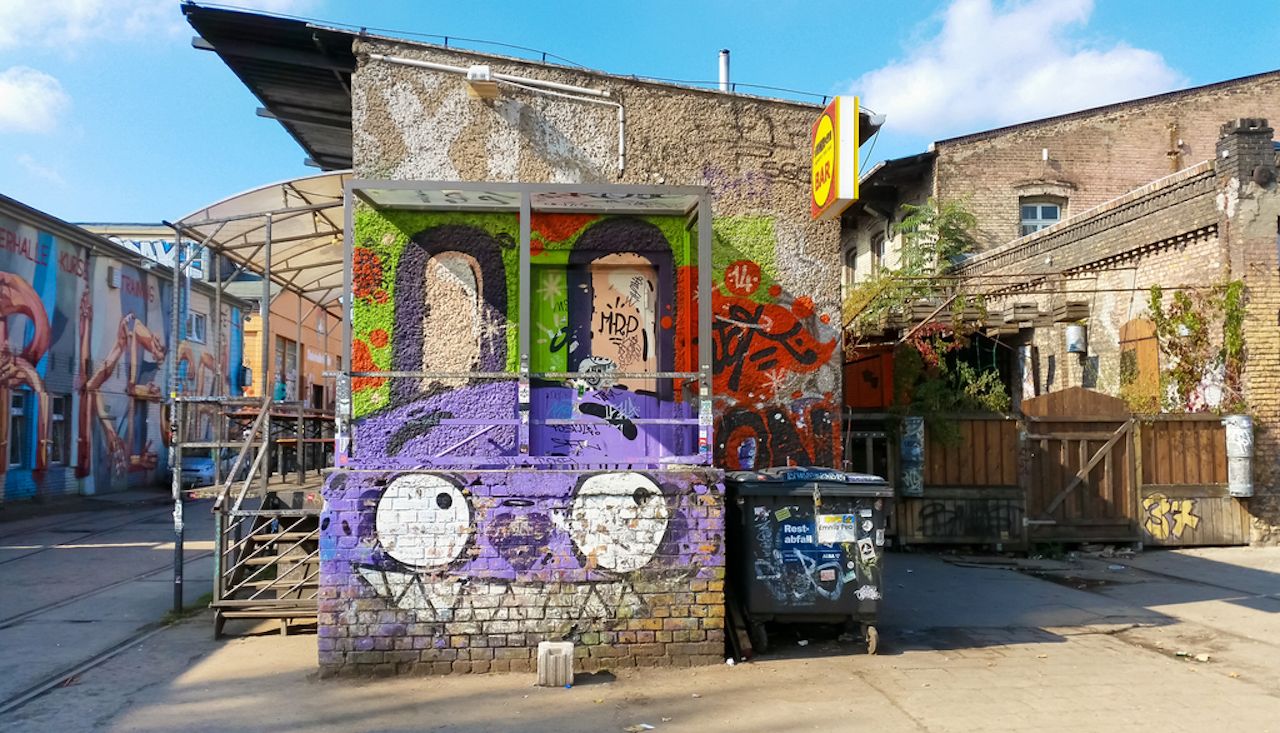 The Urban Spree is a dynamic art space located near Warschauer Strasse that houses a gallery, concert room, and event space. The primary aim of the space is to provide a location for the best of urban culture to be displayed, through exhibitions, a bookshop, concerts, an outdoor gallery, and, of course, a beer garden. The gallery includes a number of urban artists, including Above, Klone, Broken Fingaz Crew, Low Bros, 1UP Crew, Peachbeach, and m-city, among others.

The area surrounding Urban Spree, known locally as the RAW Gelände, is also worth exploring if you’re looking to discover more street art. Until 1994, this area was owned by the Deutsche Bahn railway company and was used as a train repair station. The site has since been transformed into a thriving offbeat space for alternative culture, and everywhere you look you’ll find graffiti, street art, and the characters that create and appreciate both. You’ll also find many of Berlin’s most popular bars and clubs here — though there’s also an indoor skate park, a climbing gym housed in a former WWII bunker, and a popular outdoor pool club if you’re not looking to party. On Sundays, you’ll also find a bustling flea market.

Until recently, the Kino Intimes was one of the few Berlin film houses that had been continuously in operation since the beginning of the 20th century. Located at the corner of Boxhagener Strasse and Niederbarnimstrasse, the cinema is easy to spot because of the eye-catching 1970s neon sign that adorns the facade. The exterior of the building is loaded up with street art creations, mainly paste-ups from both known and unknown artists. And while the intimate neighborhood cinema recently closed its doors, there are ongoing discussions with the building owners and tenants about how to best preserve and reopen this landmark. For now, the site is still a popular street art forum and is certainly worth a visit. 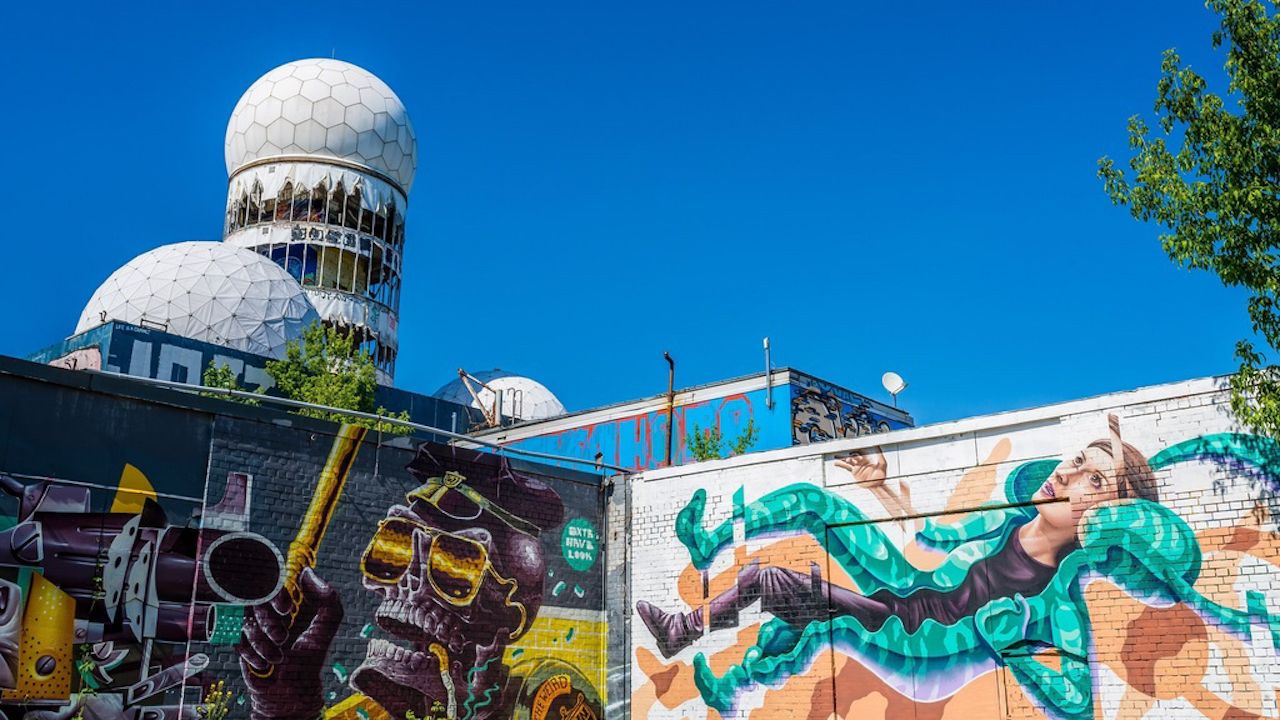 On the outskirts of Berlin, you’ll find Teufelsberg, which translates from German to mean Devil’s Mountain. The hilltop is made from rubble and is built on the site of a never-finished Nazi military college. During the Cold War, the US set up one of its largest listening stations on the hill. After the fall of the Wall, there were short-lived plans to turn the site into a set of hotels and apartment buildings, but this was eventually abandoned.

In 2016, the current owner opened the doors to curious explorers and, since then, the partly overgrown and treet art-covered station has become a popular destination for a day out in the leafy Grunewald area. The impressive view over the city, coupled with a small, on-site café set up by the local community, means that Teufelsberg is the perfect escape from the bustle of Berlin and offers a unique experience you won’t find in any other European capital. If you’re feeling particularly creative, you can actually take a street art class here to hone your own artistic genius on the walls of the former American listening station. 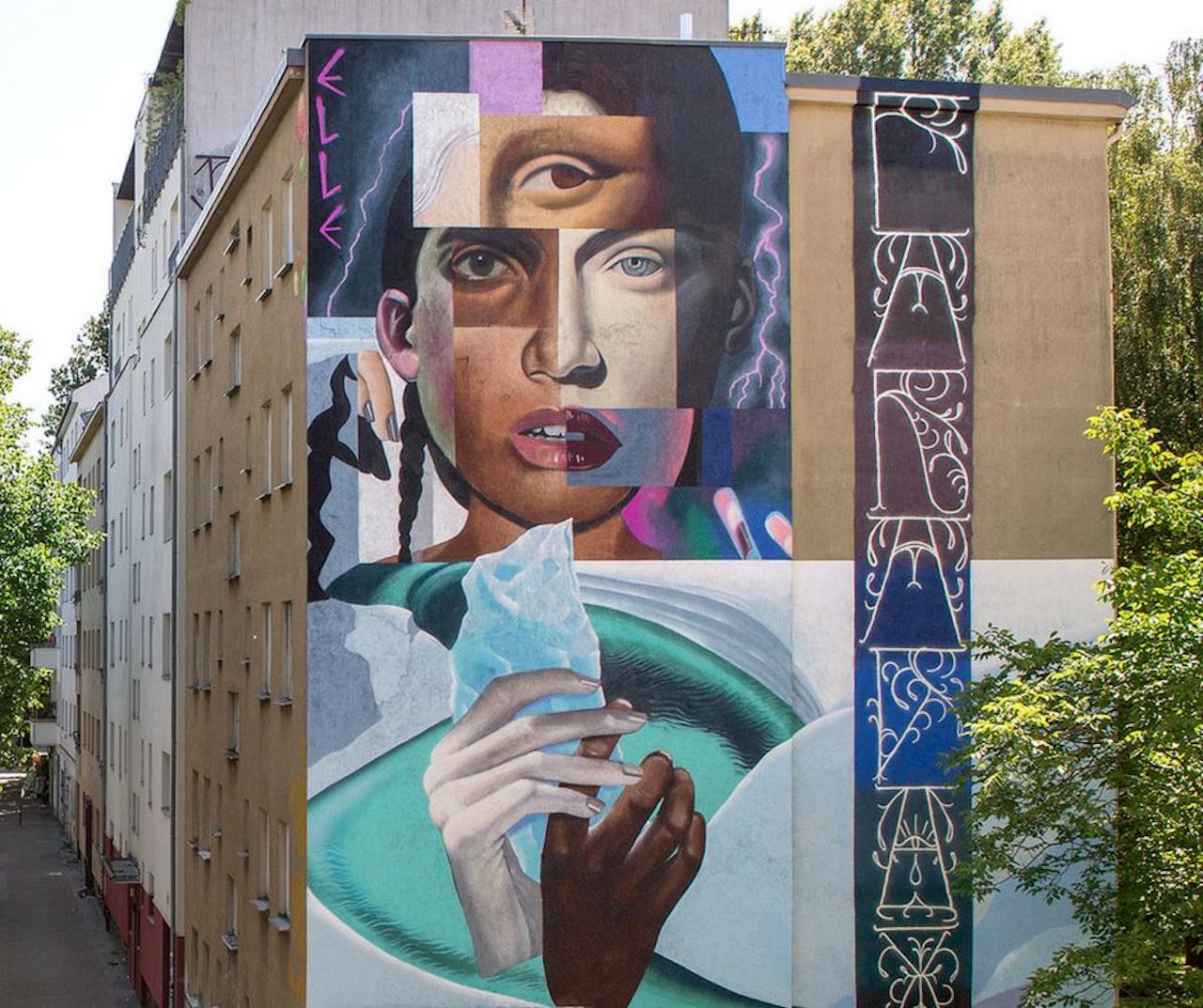 In the Reinickendorf district, not too far from the southernmost edge of Tegeler See, you will find a collection of typical 1970s Plattenbau buildings that run along Neiheimer Strasse and Bernauer Strasse. This ordinary residential area likely isn’t where you’d expect to find street art, but a few years ago, the crew behind Urban Nation invited a handful of street artists to spray some color onto the facades of buildings in this infrequently visited area as part of their annual One Wall project.

In total, there are six impressive murals created by artists from across Europe, each one approximately 13 stories high. After you’ve seen the murals and gotten your street art fill, you can head to the second largest lake in Berlin, Lake Tegel, to spend the rest of the day relaxing by the water.

Art + ArchitectureKiev Is an Amazing Hub for Street Art — and These Are the Best Murals in the City
Tagged
Art + Architecture Berlin, Germany
What did you think of this story?
Meh
Good
Awesome