Sri Lanka’s surf scene offers surfers not just warm waters, charming beach shacks, local curry houses, and palm-fringed beaches, but waves for every skill level and surfable swells nearly year-round. The best waves are found on the southern and eastern coasts. In the south, the prime surfing season is from October to the beginning of April, then in May everyone heads east to Arugam Bay on the east coast, where the dry season there lasts through September.

While foreigners discovered the epic surf in Sri Lanka as long ago as the 1960s, the country’s modern appeal as a wave riding destination has been growing since the end of its civil war in 2009. Despite a pandemic-induced drop in travel, Sri Lanka’s beaches are expected to draw avid surfers once again. Here are the best places to go, and where to stay there. 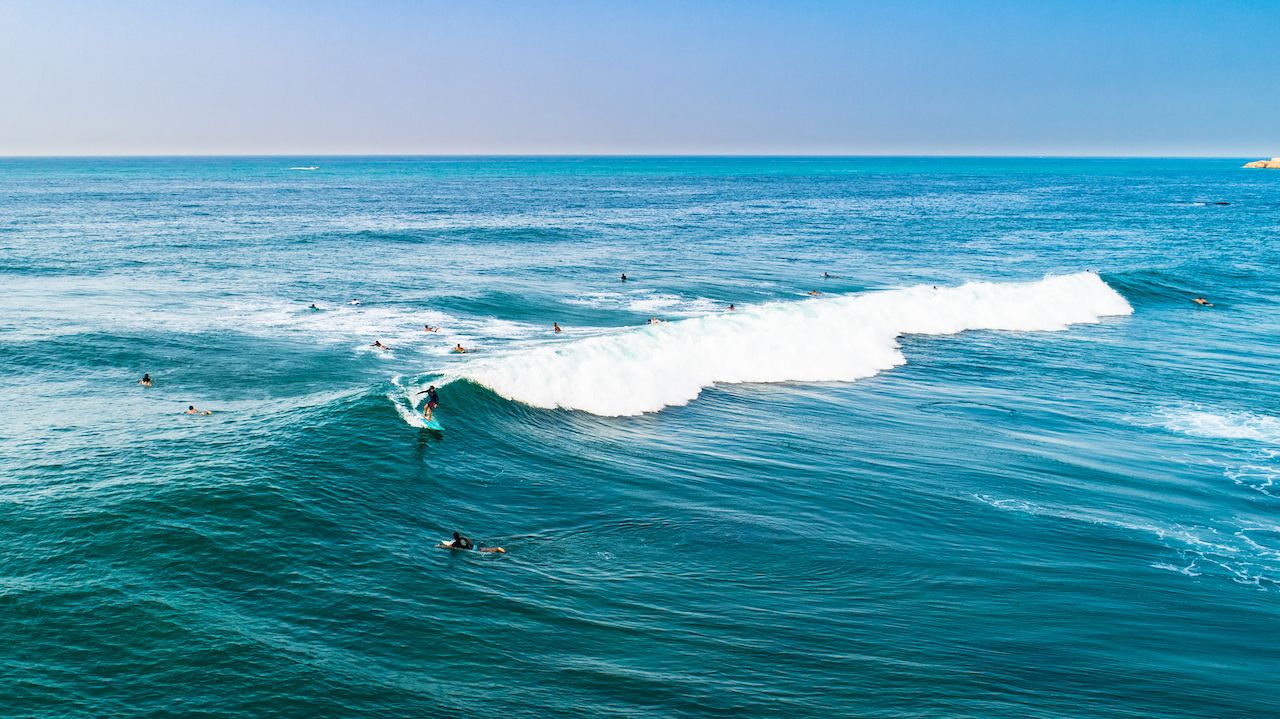 Hikkaduwa, on Sri Lanka’s southwest shore, has been a surfing staple since the 1970s. This break is best for intermediate to advanced surfers and, given its popularity, it can be a bit crowded at times. During the on-season, the main reef waves can range from two to 10 feet on a good day. When conditions are calmer, surfers can find a beach break next to the main reef with a sand bottom that’s suitable for beginners. More expert surfers can head to a spot named Benny’s, a reef break that can get your adrenaline pumping.

On land, stay at the lush Dreamtime Sri Lanka, just a few minutes from the beach. It offers beautiful boutique villas and cabanas with your own private plunge pool. For those on a budget, the garden cabana or budget rooms both feature private outdoor showers surrounded by tropical greenery. The hotel can also arrange surf lessons with local surf instructors for beginners, as well as diving and snorkeling trips. 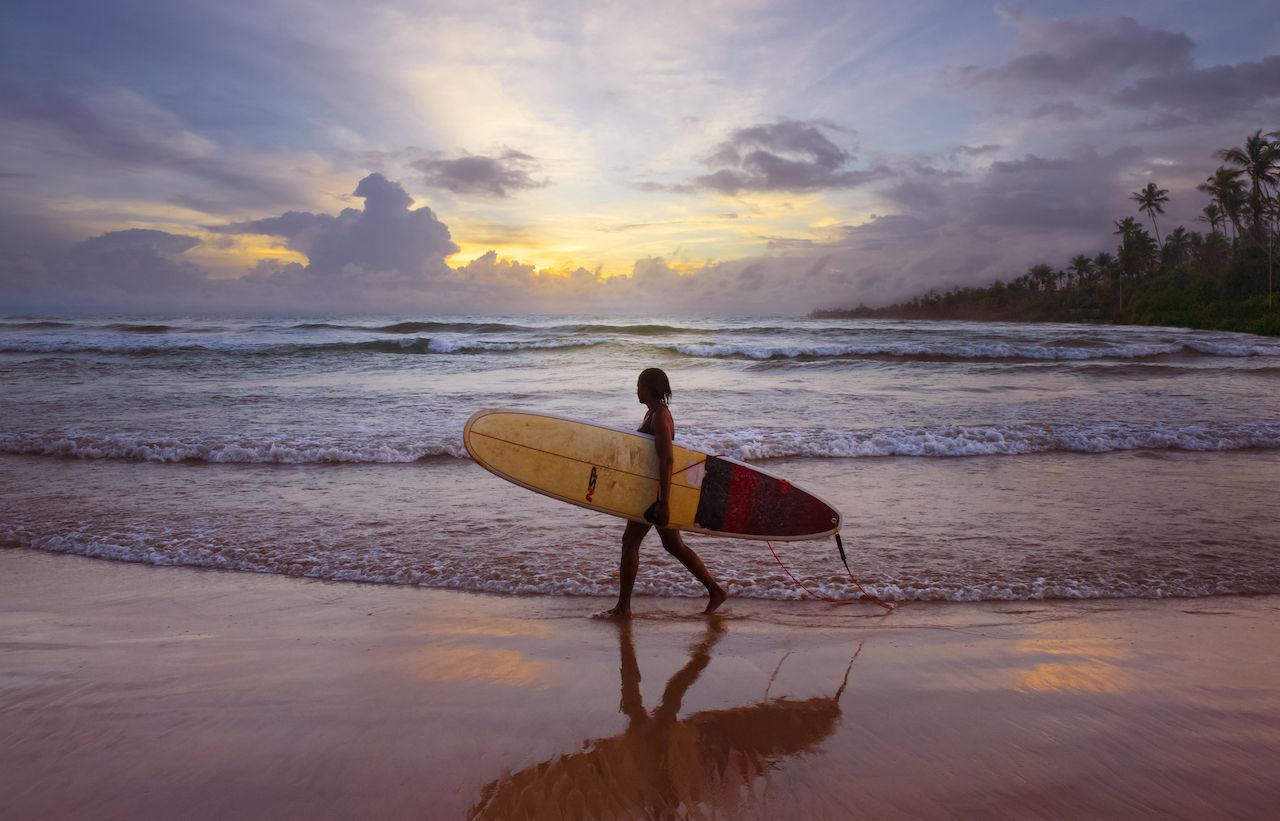 Near the southern city of Galle, Unawatuna has quickly become a fixture for those to surf in Sri Lanka’s lively south coast. The trendy town has no shortage of palm-fringed beaches and surf breaks for surfers of all levels. For beginner-friendly spots, head north inside Unawatuna Bay to find gentle waves at Bonavista Bay Surf Point or Closenberg Surf Point. For adrenaline-junkies, Unawatuna has a powerful left-hand wave that breaks on the reef off Unawatuna Beach. The Dalawella Reef Surf Point is definitely for experienced surfers only and not suitable for beginners thanks to a reef made hard and sharp by rocks, coral, and urchins.

Unawatuna offers a wide selection of accommodation for all budgets from rustic beach bungalows and local homestays to luxury hotels. For those searching for authentic eats and sleeps, check out Bedspace. It offers cozy guesthouses and beach houses at mid-range prices. Bedspace is located in between both the beginner and intermediate surf spots, just a few feet from Unawatuna Beach. 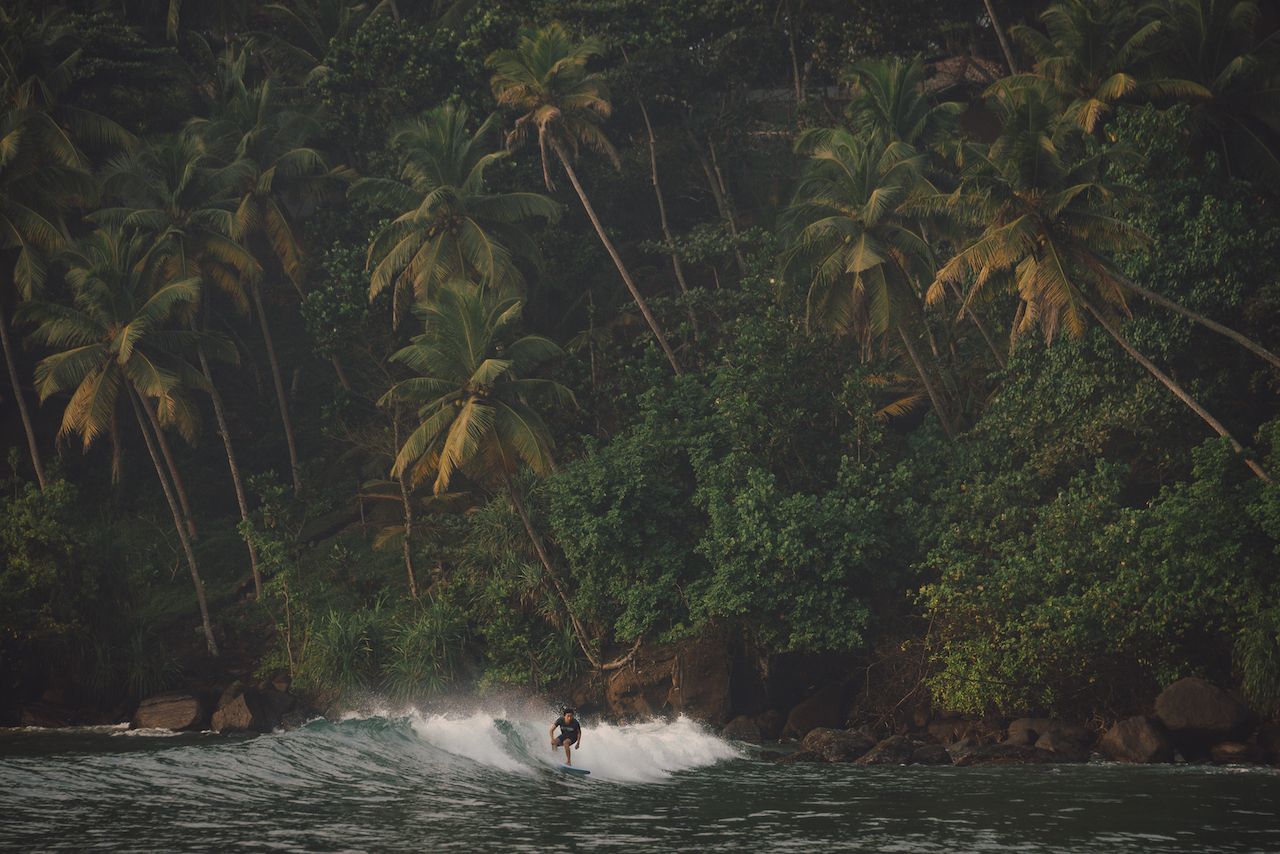 It may be a dot on the map, but this small village near Sri Lanka’s southern tip attracts some serious surfers. The best spots for beginners are the Kabalana Beach break and the South Beach Surf Point. It’s a long stretch of mellow waves, and if you’re lucky with the right conditions a left appears for more intermediate surfers. Plus, it’s the perfect beach to relax at after a long morning session of surfing, with a few local cafes and eateries near the beach.

For those looking for a bigger swell, there are also plenty of options for all skill levels, and within walking distance from each other. Ask the locals to point you in the direction of the “rock,” a deep reef break that packs a punch.

The area is well known for its iconic Stick Fishermen, or locals who fish while perched on stilts over the water. Nearby, you’ll find Stick’s Breaks, a reef break that can form left, right, and nice barrels under the right conditions. Then, south of the fishermen, there’s the Rathith Reef Surf point where local surf competitions have been held due to the somewhat challenging A-frame waves that develop here.

As for accommodation, there’s not too much variety in this area besides some quality surf camps and local villas. If you want a touch of luxury during your travels, stay at the swanky Sandhya Hotel. Directly on Kabalana Beach and steps away from the ocean, this boutique hotel has a minimalist Scandinavian design. The comfortable rooms and amenities like the plunge pool will leave you feeling well-rested, rejuvenated, and ready to hit the next surfing spot going further east. 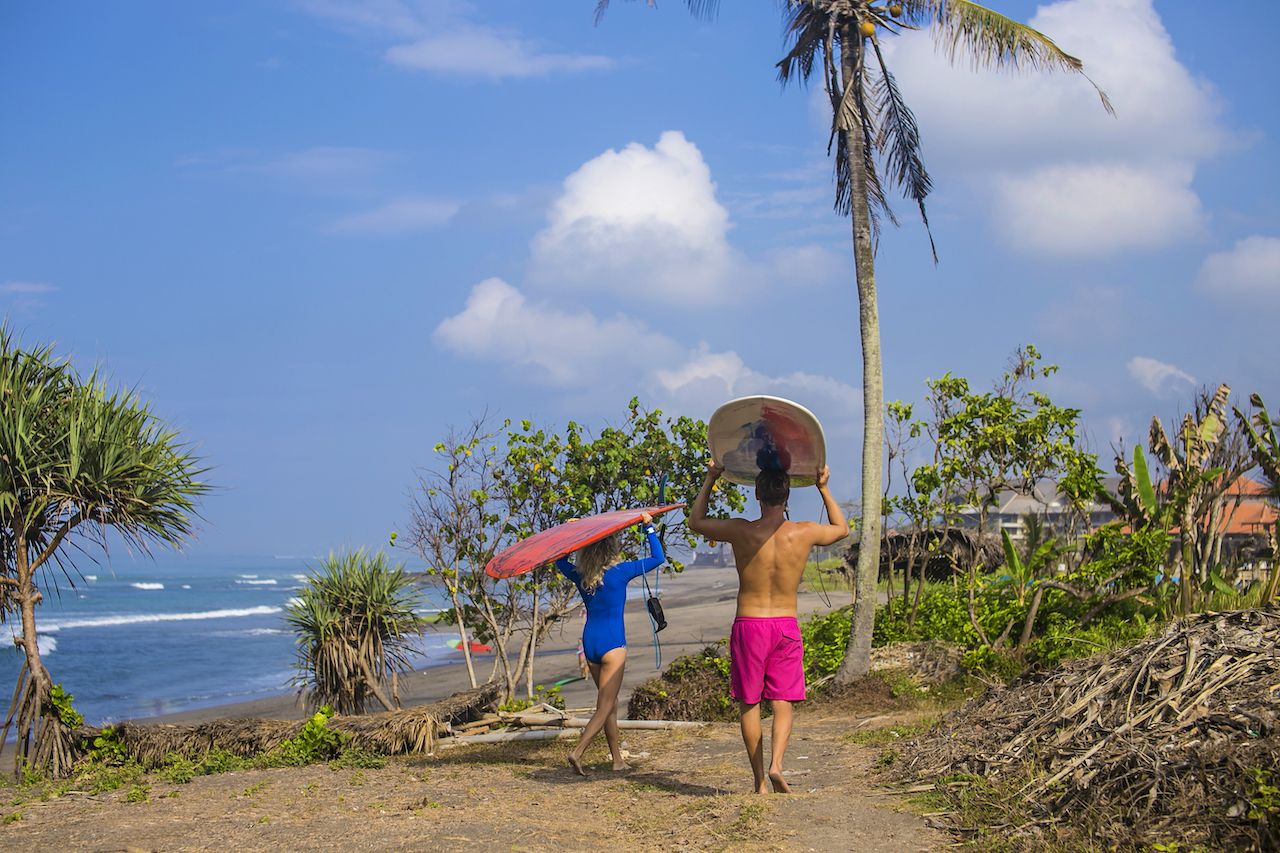 Located just east of Ahangama, but before Weligama, Midigama is the place where more advanced and intermediate surfers head to find more challenging waves. It’s a rural village with bays, unspoiled beaches, and an array of prime surfing spots. Due to the underdevelopment of the area, it has a more authentic Sri Lankan vibe that you won’t find in the more frequented cities going east.

It’s home to spots like Coconuts, Plantations Point, Rams, Lazy Left, and Lazy Right, all located a short distance away from each other. Lazy Left and Lazy Right are more of the gentle and mellow waves that are perfect for beginners. Head to Lazy Left during the low tide, this wave is ideal if you are a goofy-footed surfer. Those up for a challenge will want to visit Coconuts, Plantations Point, and Rams. Rams is for more high-level surfers; this right-reef wave can be powerful and can form barrels under the right weather conditions.

Stay at Surfing Wombats, especially if you want to meet other surfers. This laidback hostel offers surf lessons, yoga, snorkelling, and scuba diving trips. It has private rooms and affordable dorm rooms and even offers glamping tents if you want to sleep under the stars. 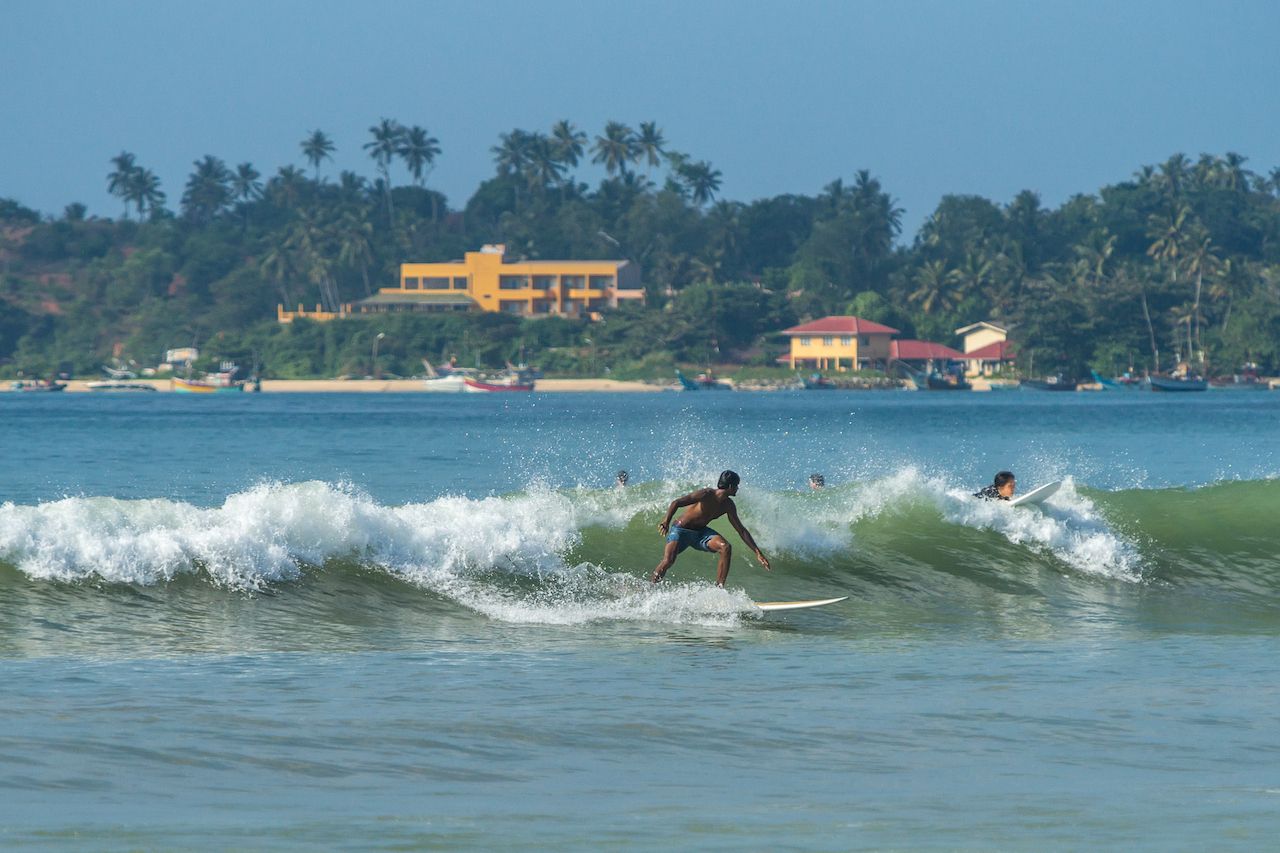 The next city over to the east is Weligama, which is the perfect place for beginners to try the surf in Sri Lanka. Weligama means “Sandy Village” in the local Sinhalese language, so expect miles of beaches in this fishing village turned surf spot. There are over 20 surf schools scattered along the beachfront, so there’s no shortage of instructors for those wanting to learn or advance their skills. You’ll find consistent waves and sand beach breaks that are forgiving for first-timers. Plus, Weligama is a short tuk-tuk ride to the nearby city of Mirissa that also has some sweet surf spots.

Stay in the budget-friendly and social Hangtime Hostel, directly across from the beach and steps away from a handful of surf schools. Not only is this place aesthetically pleasing with its beachy shabby-chic vibes, but it also features a rooftop restaurant that looks directly out onto the ocean so you can scope out the waves. It offers surfboards for hire and affordable morning and afternoon yoga classes. Stay in the homey dorms or rent out the double rooms that are decked out in handcrafted restored beds made from actual local fishing boats. 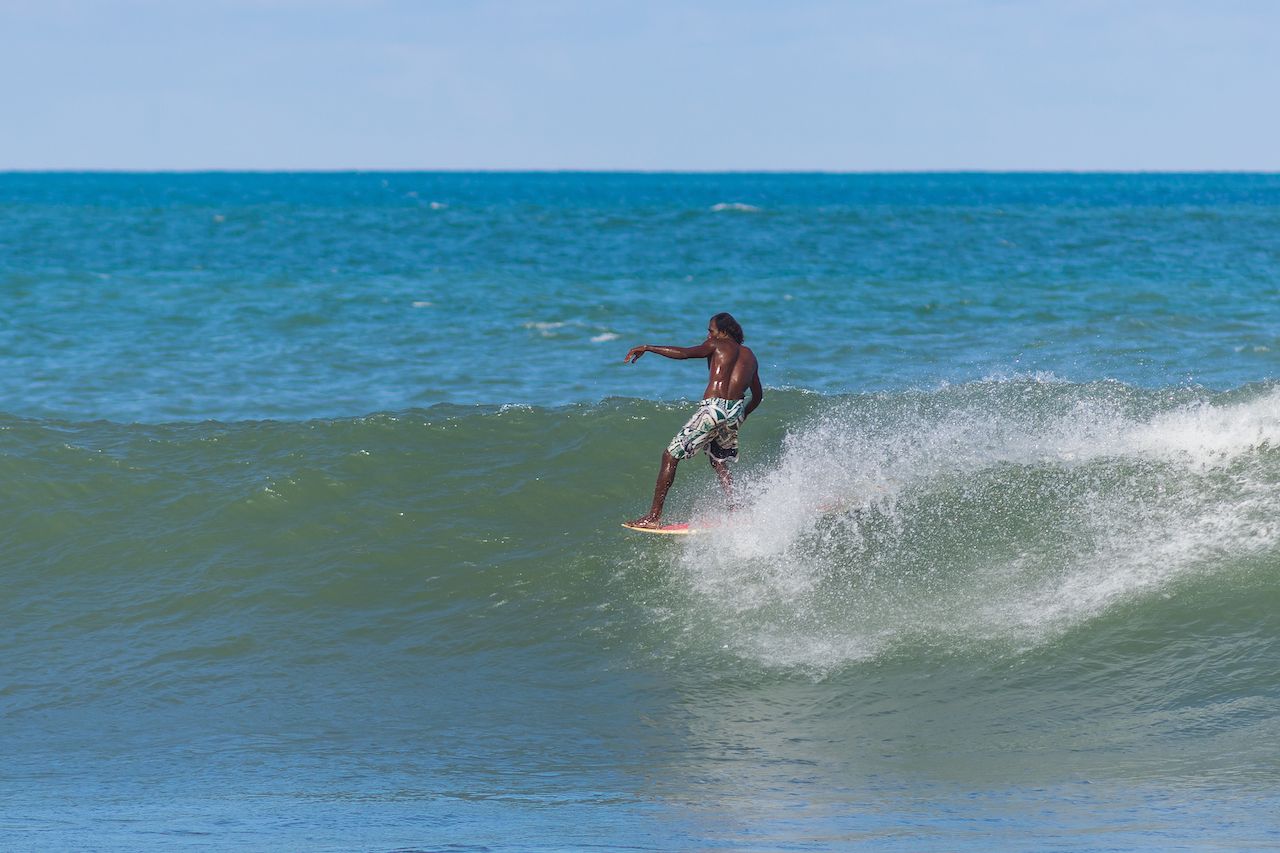 Saving the best for last, Arugam Bay — or A-bay for short — is on the east coast but probably takes the cake for the best all-around place to surf in Sri Lanka. It’s the farthest from the Capital of Colombo, but well worth the journey to the other side of the island due to the array of different waves it provides. Arugam Bay has a less-Sri Lankan feel than the other surf spots listed due to its popularity among tourists, but you’ll find some excellent local catching rides as well and, in any case, this is a surf destination that should not be missed.

If you’re a beginner, start at Baby Point, a small wave that breaks on the inside of Arugam Bay. Then, work your way up to Elephant Rock/Crocodile Rock, a 15 minute tuk-tuk ride south. More intermediate surfers head to Peanut Farm, a sand-bottomed beach located about 20 minutes out of town.

Whiskey Point is another popular spot, but be sure to arrive early to beat the crowds. Pottuvil Point is one of the best right-hand breaks, especially from August to November when swells are possible. Advanced surfers who don’t want to compete against a mass of surfers for waves should head to the remote Okanda. Found about an hour’s drive away, the spot will reward you with steep barrel waves that can reach several feet high.

A-bay is full of accommodation options from luxury resorts and cozy bed and breakfasts to affordable low-key hostels and rustic beach bungalows. Stay at Ranga’s Beach Hut in the city and stay in one of its rustic cabanas. If you’re seeking more privacy, head to The Lighthouse Beach Hut. It offers more upscale cabanas, plus some treehouse cabanas with great jungle views. It’s found about 30 minutes north of A-bay, near less-visited surf spots that are growing in popularity like Lighthouse Point and Green Point.

SurfingThe Most Perfect Surf Spots on Each Hawaiian Island for Your Skill Level
Tagged
Beaches and Islands Surfing Sri Lanka
What did you think of this story?
Meh
Good
Awesome