Costa Rica is renowned for its rich biodiversity, protected in the national parks that cover an astonishing one-quarter of the country. In addition, the small Central American country boasts a handful private nature reserves, which also protect its precious flora and fauna. The Monteverde Cloud Forest is the best known of these private eco-sanctuaries and is a must-visit for anyone set on experiencing Costa Rica’s natural treasures. The list of things to do and the ways to take in the scenery — whether with a guide on the forest floor, whizzing over the canopy, or in the dark of night — are endless.

Monteverde is a town, a region, and a forest. 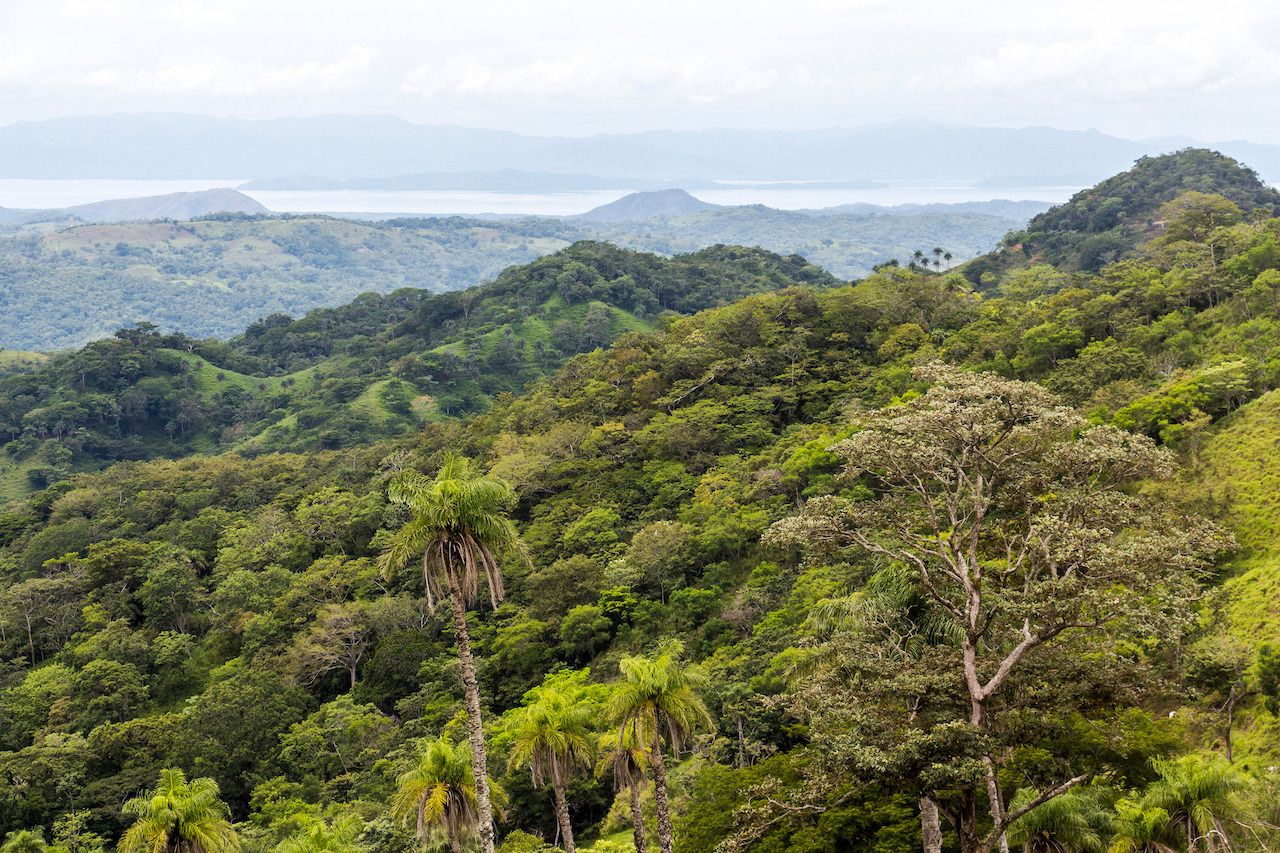 Researching Monteverde can be a little confusing. Monteverde, which means “green mountain,” is a small town but also refers to a region including two other towns, Santa Elena and Cerro Plano. It’s difficult to distinguish where one finishes and the next starts on the lush slopes of the Cordillera de Tilarán, or Tilarán mountain range, in north central Costa Rica.

The roughly five-hour bus trip from San Jose terminates at the bus terminal in Santa Elena. If you’re renting a vehicle, try to rent an SUV with four-wheel drive. Some roads are steep and winding, some dirt. Once you’ve arrived Santa Elena, the hilly town is small enough to cover on foot. This is where you’re likely to spend your non-nature time as it has plenty of accommodations, restaurants, banks, bars, markets, and shops.

Located at an altitude above 4,600 feet, this region is much cooler than coastal Costa Rica. Temperatures here range from 59 to 72 degrees, with most rain falling between May and October/November. March sees the least rainfall while October has the most — but almost all months have significant rain. The forests at this elevation are called “cloud forests,” rather than rainforests, as they are almost continuously covered by cloud or mist. Moss covers much of the vegetation due to the dampness. 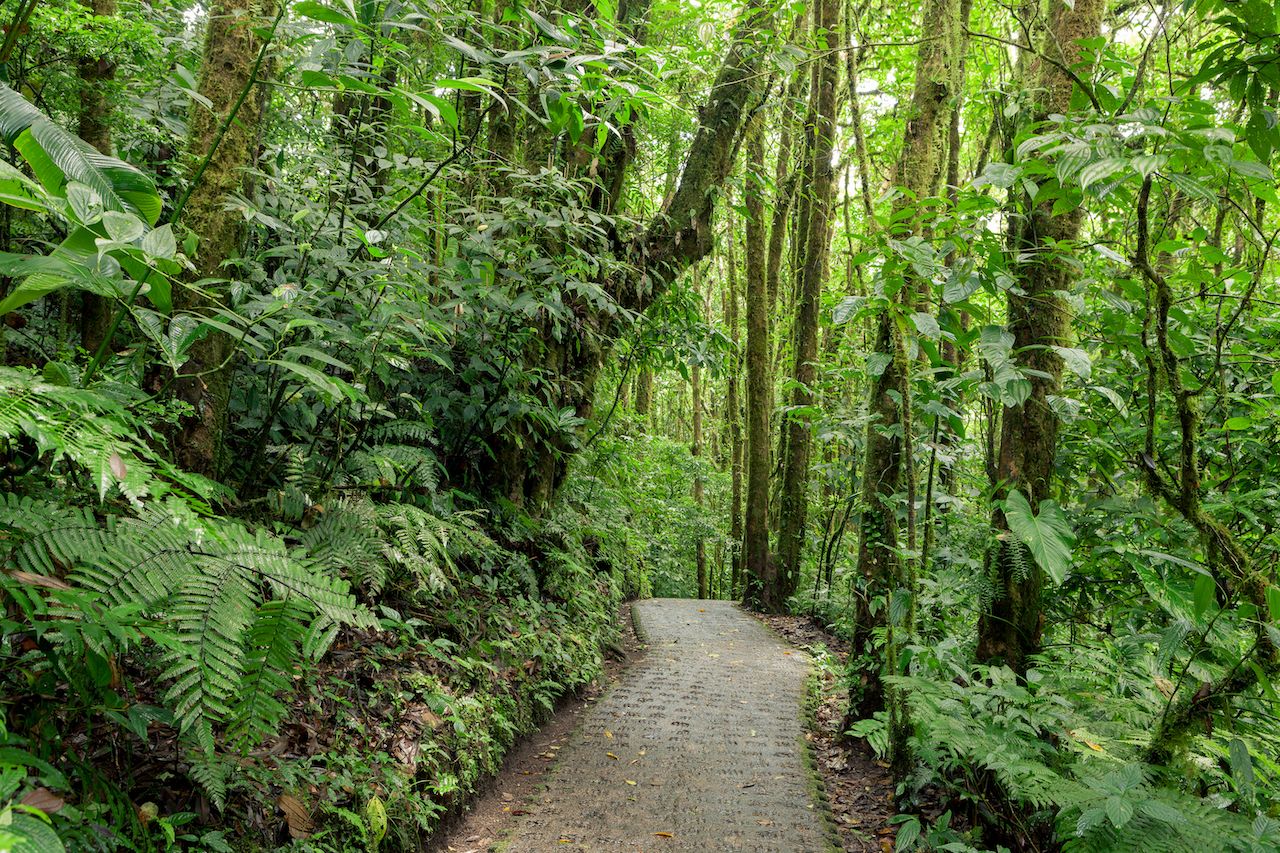 The community of Monteverde was founded by a group of American Quaker families in the 1950s. In 1972 they purchased, along with wildlife and environmental organizations, an area of 811 acres that became the Monteverde Cloud Forest Biological Reserve — marking the first privately owned reserve in Costa Rica.

The reserve has now grown to nearly 26,000 acres. The area’s abundant biodiversity and serene beauty attracts an estimated 250,000 visitors per year to Monteverde — which, while a lot, is less than the number who visit Costa Rica’s most popular national parks. Even so, tourist numbers are limited daily. Visitor numbers are limited to 450 per day, with only 250 allowed to enter at a time — so be sure to get to the cloud forest early.

Approximately 3.4 miles from Santa Elena, the road winds through Cerro Plano and becomes dirt towards Monteverde. Many tour operators offer pickup from accommodation, but public buses or taxis to the park are available for those traveling solo. You can also opt to stay at one of the many accommodations options between Santa Elena and the park or at the lodge in the park itself. 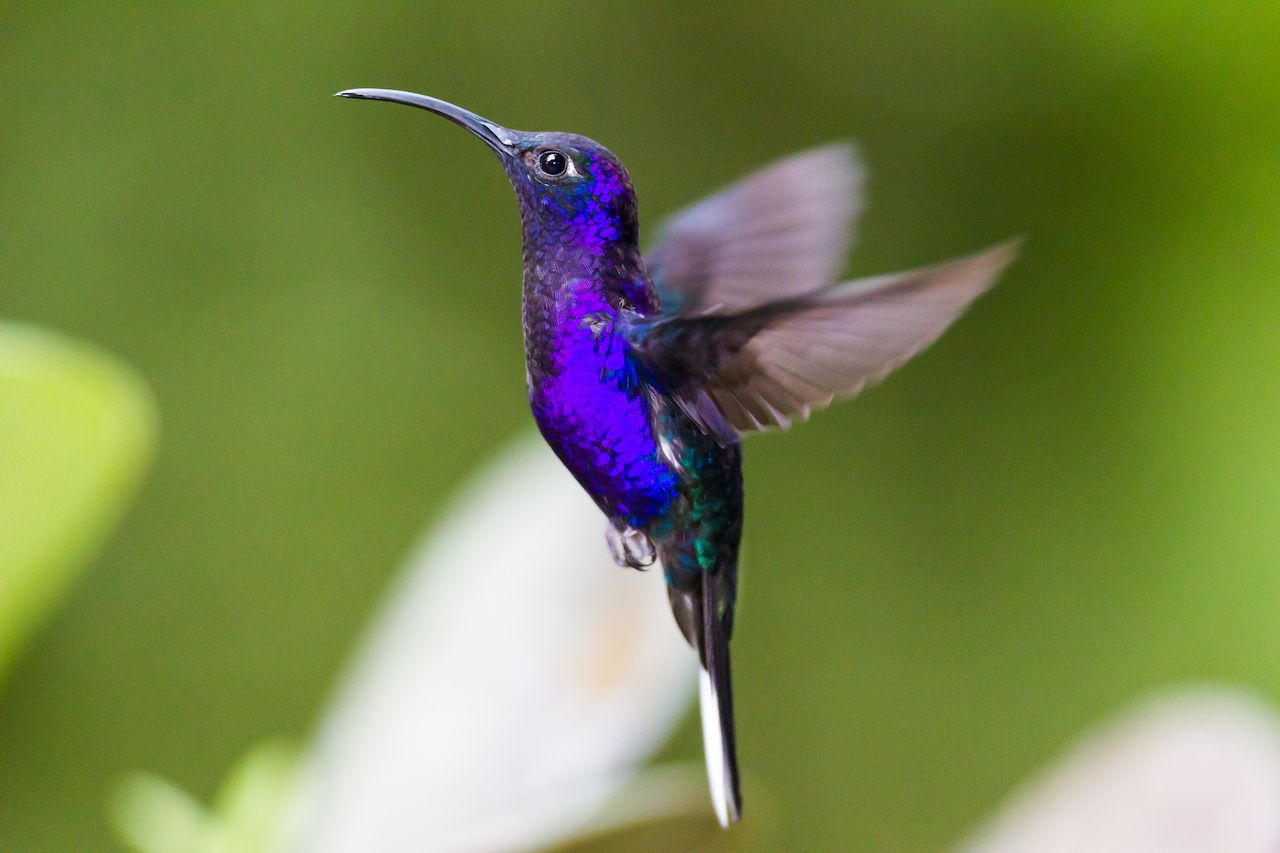 As you wait to enter the reserve, admire the free Hummingbird Gallery where up to 14 species of colorful, tiny hummingbirds between three and five inches long flit around feeders. (We checked, and according to the Audubon Society, hummingbird feeders are okay.) Alternatively, after visiting the reserve, you can hit up the café there, a perfect place to eat and be entertained by nature.

We recommend hiring a guide to learn about the cloud forest and its biodiversity. With around 3,000 species of flora, among them bromeliads and orchids — 34 species of the 500 growing here can only be seen in Monteverde — there’s a lot to learn. Hibiscus and other bright flowering plants add color to the verdant greenery.

Guides can spot animals, birdlife, and insects that are camouflaged in this misty, cloud-covered forest, which most visitors would miss. Guides are also in contact by radio with others throughout the reserve to share sightings of difficult-to-see wildlife, such as the sloth and resplendent quetzal, which has a “near threatened” status according to the International Union for Conservation of Nature. 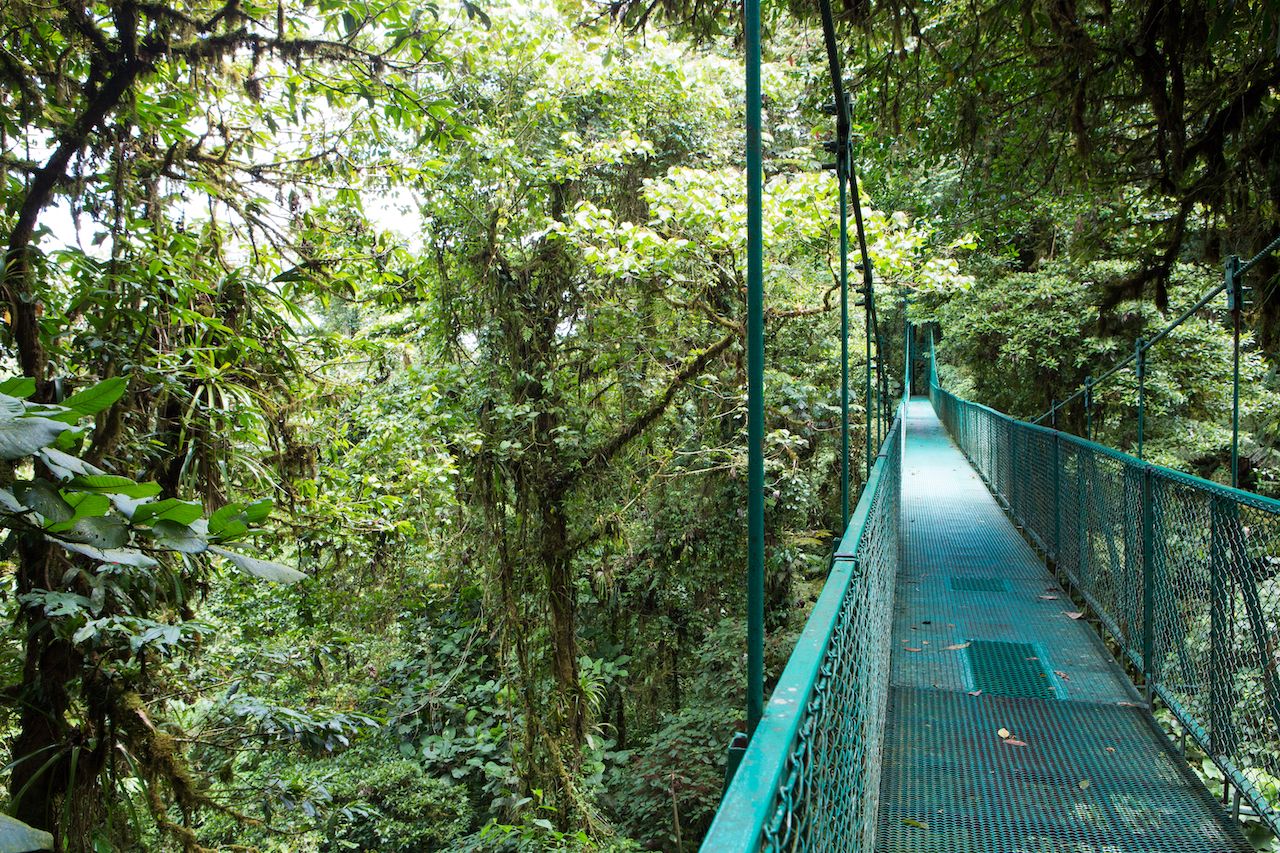 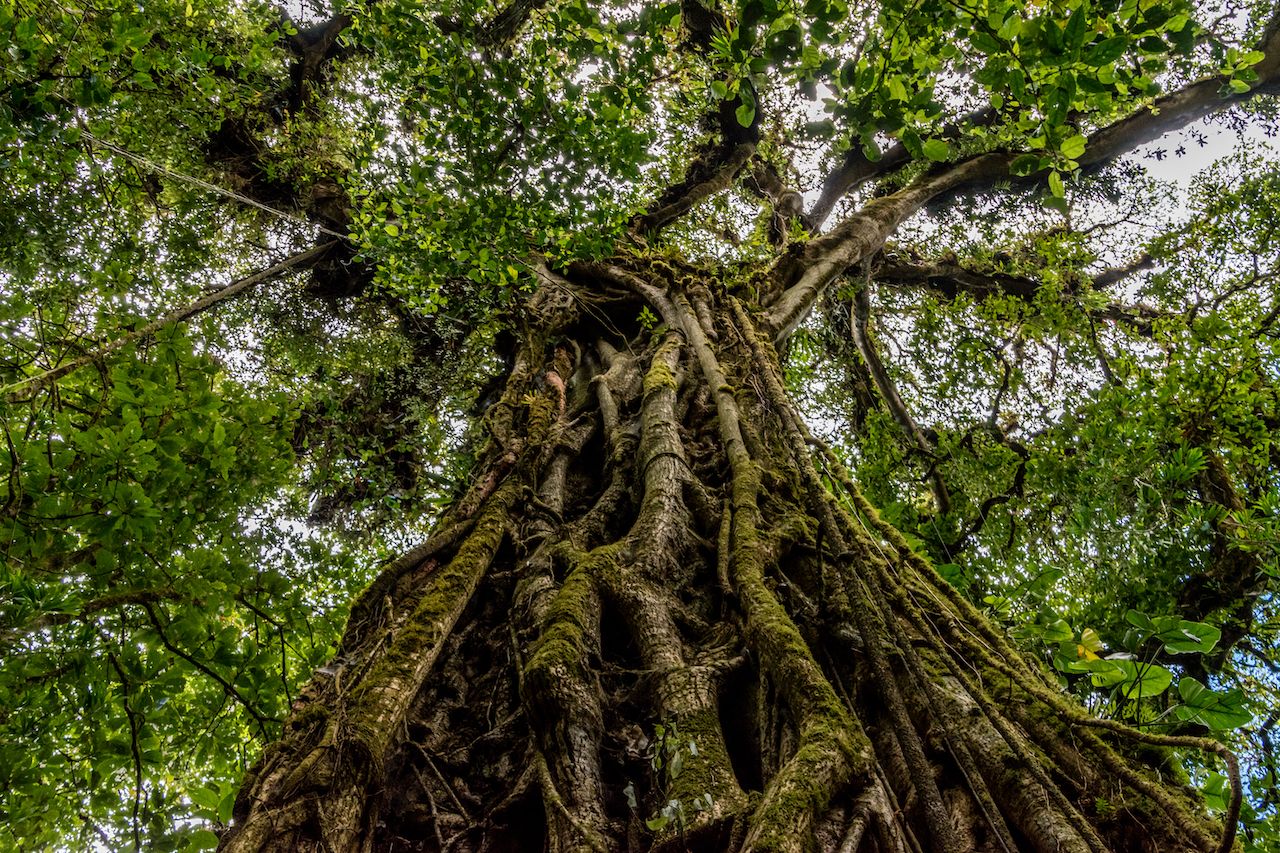 The ficus trees I found are not far out of Santa Elena on the road leading to the Monteverde Cloud Forest Biological Reserve. It’s a bit of an uphill walk all the way. Turn left onto the dirt road which leads to Monteverde Cloud Forest Lodge. Just past the Cloud Forest School, walk up the road a little and enter the forest on the left-hand side. (Parking is available if you’ve opted to drive.) There are no signs, but the path is visible, and it’s only a few minutes walk to the trees. The lattice-work the vines have produced is incredible.

If you’d like to climb one, check out Treetop Climbing Monteverde run by Finca Modelo Ecológica situated just over four miles from central Santa Elena. With safety gear provided, you can climb a 131-foot-tall ficus tree to a viewing platform then rappel or climb back down.

Fly over the canopy. 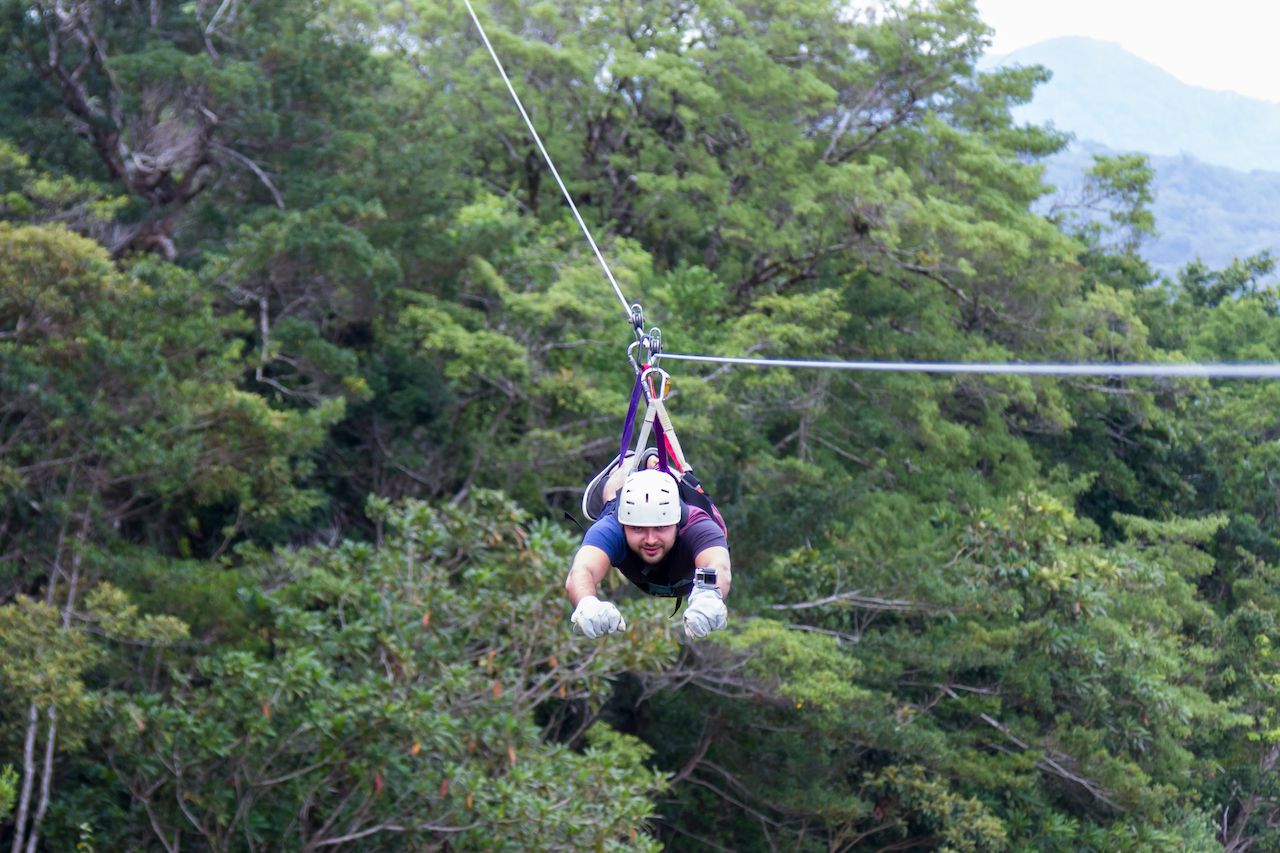 Zip-lining was first popularized in Costa Rica. Biologists looking for a way to study dense forest without upsetting the environment came up with the idea. Once they had carried out their research, the idea for using the zip-lines in eco-tourism came about. It’s a perfect way to view the biodiversity without causing harm and have an adventure at the same time.

There are five zip-lining adventure parks around Monteverde. Even if the day is dull and drizzly, it’s worth doing. Flying through the mist, alone and Superman-style, above the green, pompom-like forest canopy is like nothing else.

100% Aventura in Parque de Aventura boasts the longest zip-line in Latin America at just under a mile and has 11 other cables traveling through the treetops along with bridges to walk amongst the canopy. Don’t panic if you don’t think you can get the hang of stopping yourself at the end of your exhilarating ride; most lines automatically brake. 100% Aventura also lays claim to having the biggest “Tarzan swing” in Costa Rica. Jump from 295 feet and fall 148 feet. You may scream the entire time. Safety is a high priority, with detailed instructions offered in English prior to starting.

For those less adventurous, Sky Adventures Monteverde Park has gondolas to enjoy the views. Bookings are essential at most facilities. 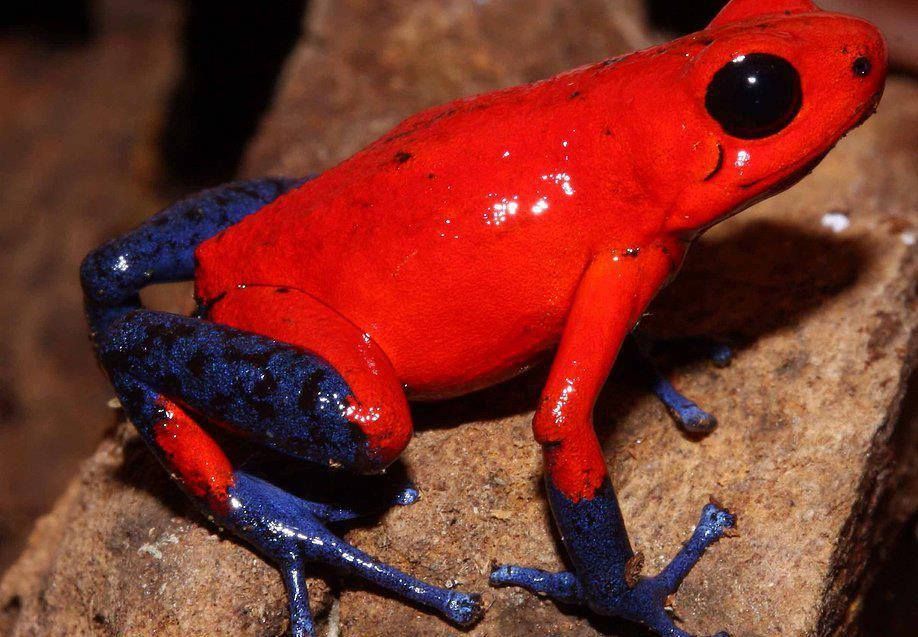 The best place to see Costa Rica’s frogs up close and get great photographs is the Monteverde Frog Pond since some of the frogs are less than an inch long. Tickets allow visitors to go during the day and again at night. The best time to visit is late afternoon/early evening when both the daytime and nocturnal frogs are active and more vocal — although it can get busy then.

Bilingual guides will enthrall with everything you ever wanted to know about these amphibians. With amazingly colorful red-eyed tree frogs, poison dart frogs, cane toads, and crowned frogs amongst some of the species found in terrariums here, the visit is a highlight of the Monteverde area.

Want to see butterflies and insects up close? 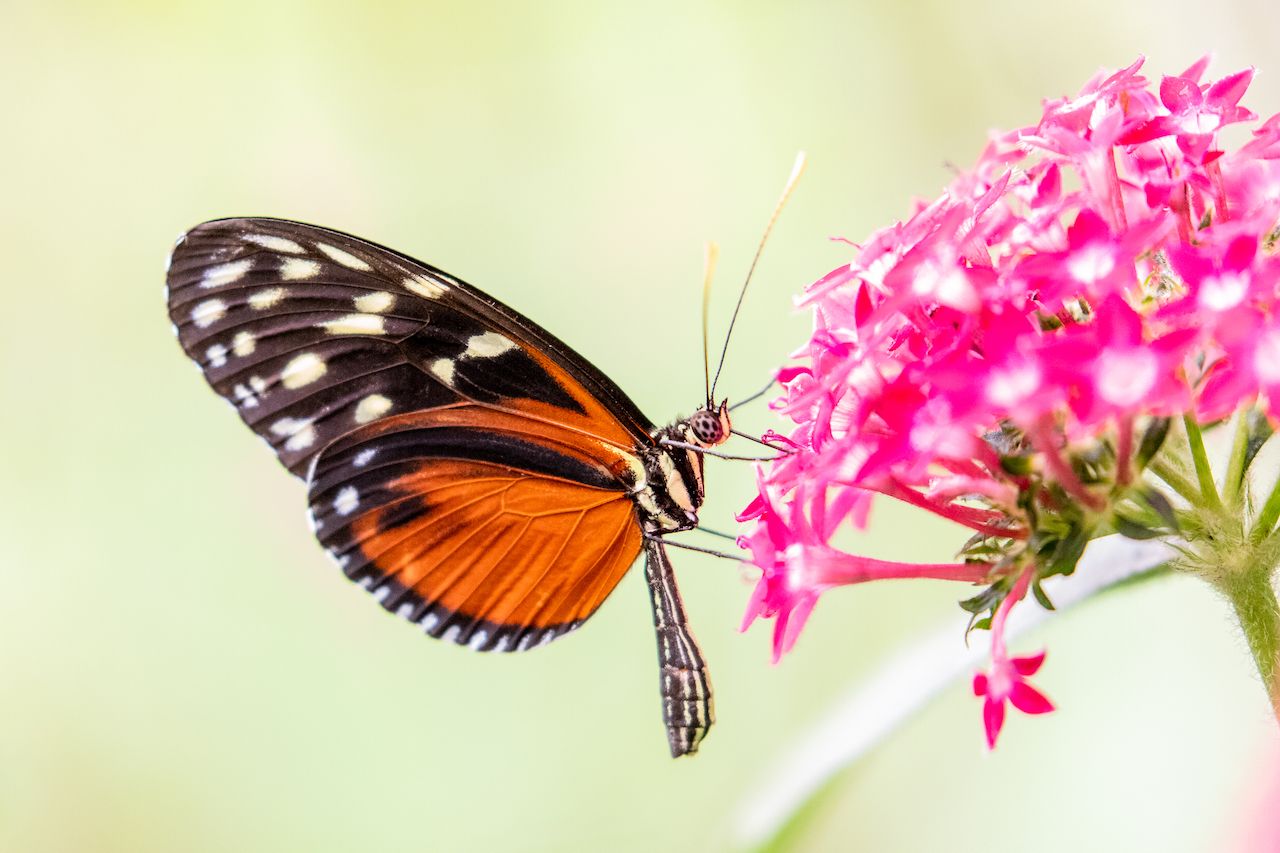 You can see butterflies and insects at the Frog Pond, but the Monteverde Butterfly Garden is really the place to experience them. Eighteen percent of the world’s butterflies, and 90 percent of Central American species, are found in Costa Rica. That’s around 3,000 species of butterflies and moths.

Between Santa Elena and Monteverde town is Cerro Plano and the Monteverde Butterfly Gardens, Jardin de Mariposas. It’s around a 20-minute uphill walk from Santa Elena. Four gardens feature different habitats with around 30 species of butterflies. Enthusiastic English-speaking guides are very informative. See the blue morpho, the male of which is an iridescent blue with a wingspan of eight inches, and the owl butterfly, with an “owl eyes” pattern on its brown wings. Marvel at butterflies with transparent wings, which make it easier for them to hide from predators, as well as striped, spotted, and multi-colored butterflies — all natural works of art.

Costa Rica has 100,000 species of insects. The Monteverde Butterfly Garden is home to 20 or so species of insects along with leaf-cutter ants. Also found in this three-acre complex are coatis, agoutis, and capuchin monkeys, and the odd armadillo pops in.

Explore the forest at night. 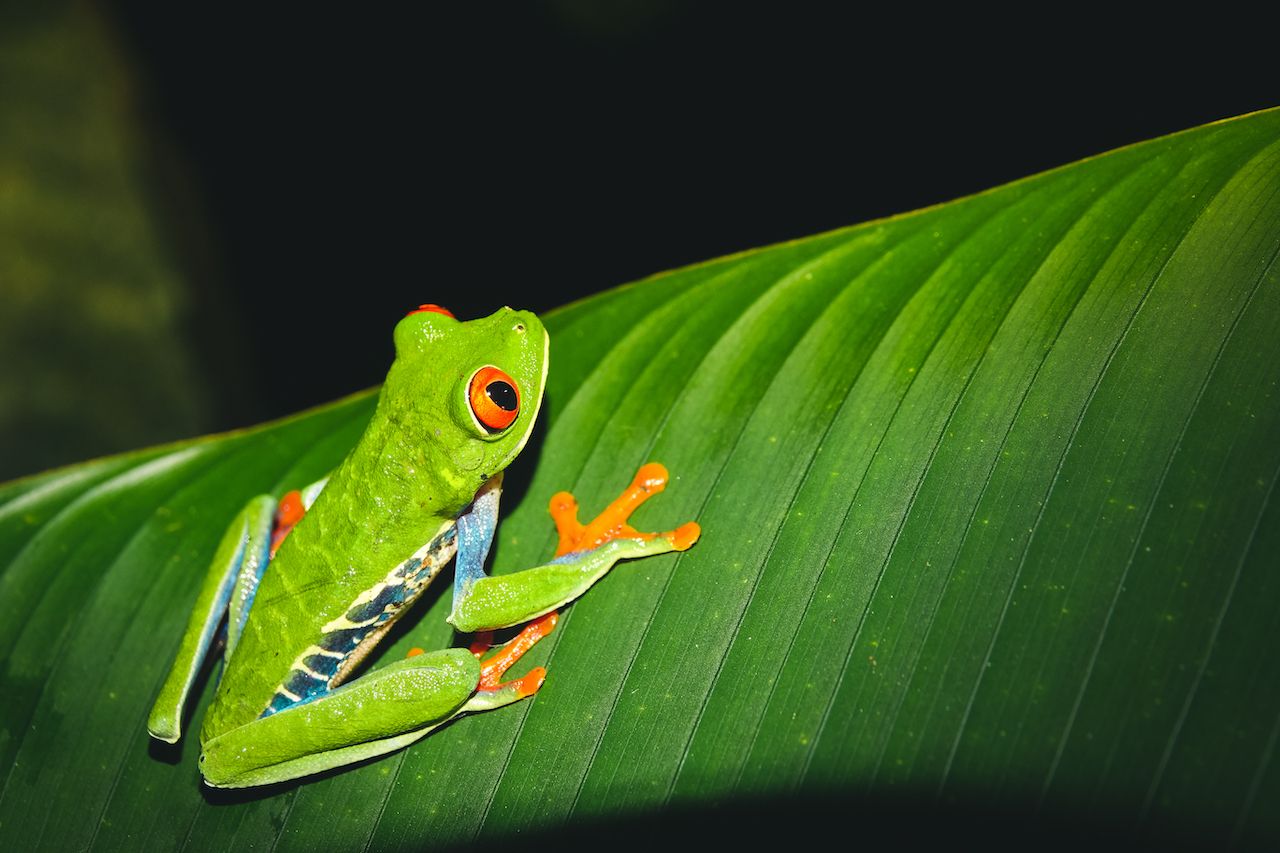 It’s amazing how much can be seen at night in the forest. If you’re staying in Santa Elena, check out the wildlife refuge, only around a seven-minute drive from the center of town. Once a farm, today it is a 74-acre protected area. As with other nature parks in the area, the refuge runs two two-hour night tours, starting at 6:00 PM or 8:00 PM, limited to groups of eight.

With a guide and a flashlight, this adventure can be incredibly interesting, spotting and learning about the flora, and animals and insects that move around the forest at night. You might spot nocturnal olingo, one of the rarest raccoons, as well as sloths and birds sleeping in trees. You may also encounter tiny frogs and viper snakes, or, amongst the insects, rhinoceros beetles, tarantulas, dead leaf mimicking katydids, stick insects, and leafcutter ants.

And one point in your night tour, you’ll turn off your flashlights to see the glow of luminescent fungi — and to stop and listen to the noises of insects and the wind in the trees. Like many other experiences in Monteverde, the moment is magical.

Costa Rica is giving away 15 free trips in 2021, and you can nominate your loved ones