Bolivia is a landlocked expanse stretching from the Andes to the Amazon rainforest that shares borders with five other countries. While neighbors like Brazil, Argentina, and Chile get all the attention, Bolivia sees very few visitors; most people have never heard of its incredible natural landscapes and historical sites. Even travelers who do tumble through Bolivia tend to only pause long enough to visit Uyuni, the largest salt flats on the planet.

However, there is so much more to this forgotten country, including 23 national parks, nature reserves, and wildlife sanctuaries, plus at least 60 historical places hiding five UNESCO World Heritage sites. If you’re planning a visit to South America, don’t make the mistake of overlooking Bolivia’s incredibly diverse and captivating spaces. Rather, be sure to add these epic spots to the itinerary. 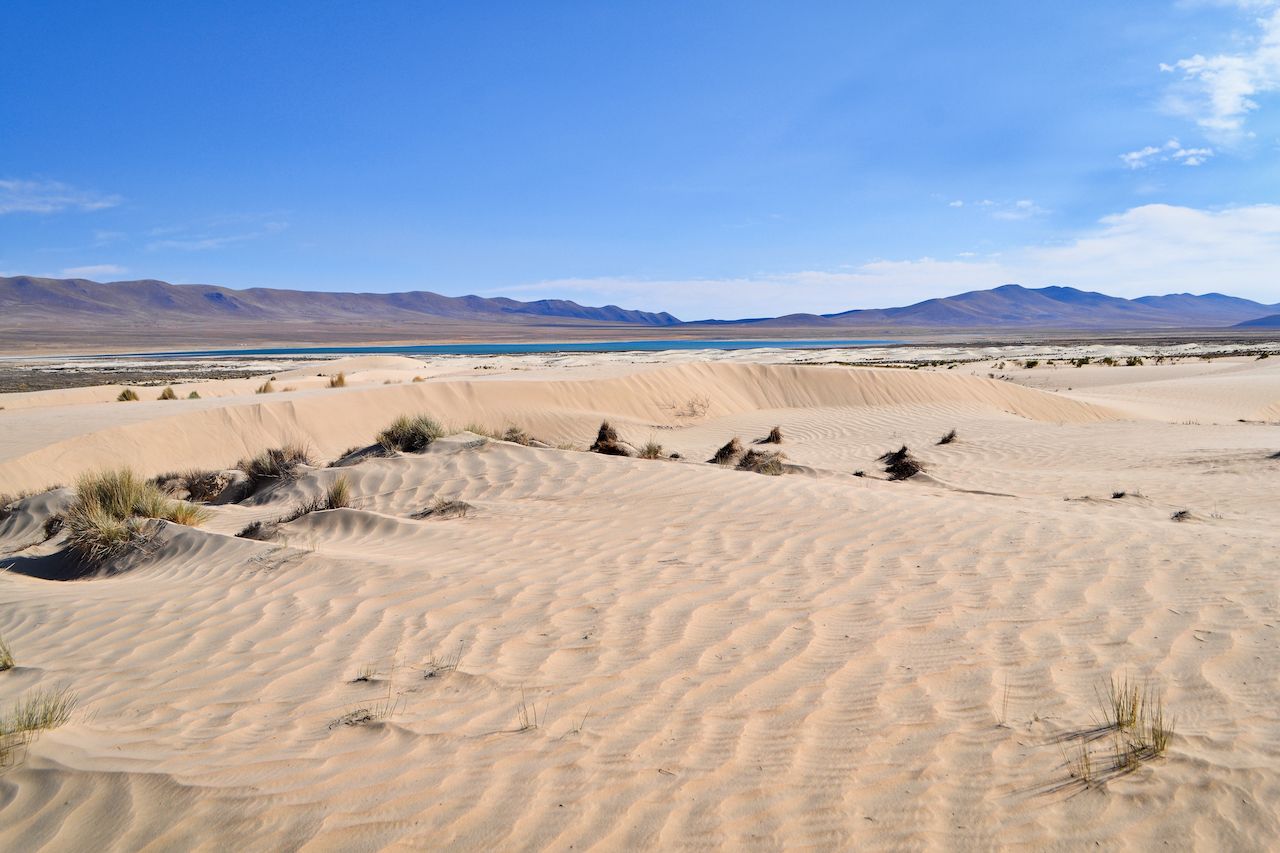 The 60-mile drive southwest from Tarija to the Reserva Biológica Cordillera de Sama takes about two hours. The reserve encompasses an astounding 268,109 acres of natural preservation area. The pristine landscape has earned coveted recognition as a Ramsar Site, an environmental sector delegated by UNESCO, for the countless species of high Andean birds who live there, alongside puma, deer, and over 250 unique plant species. 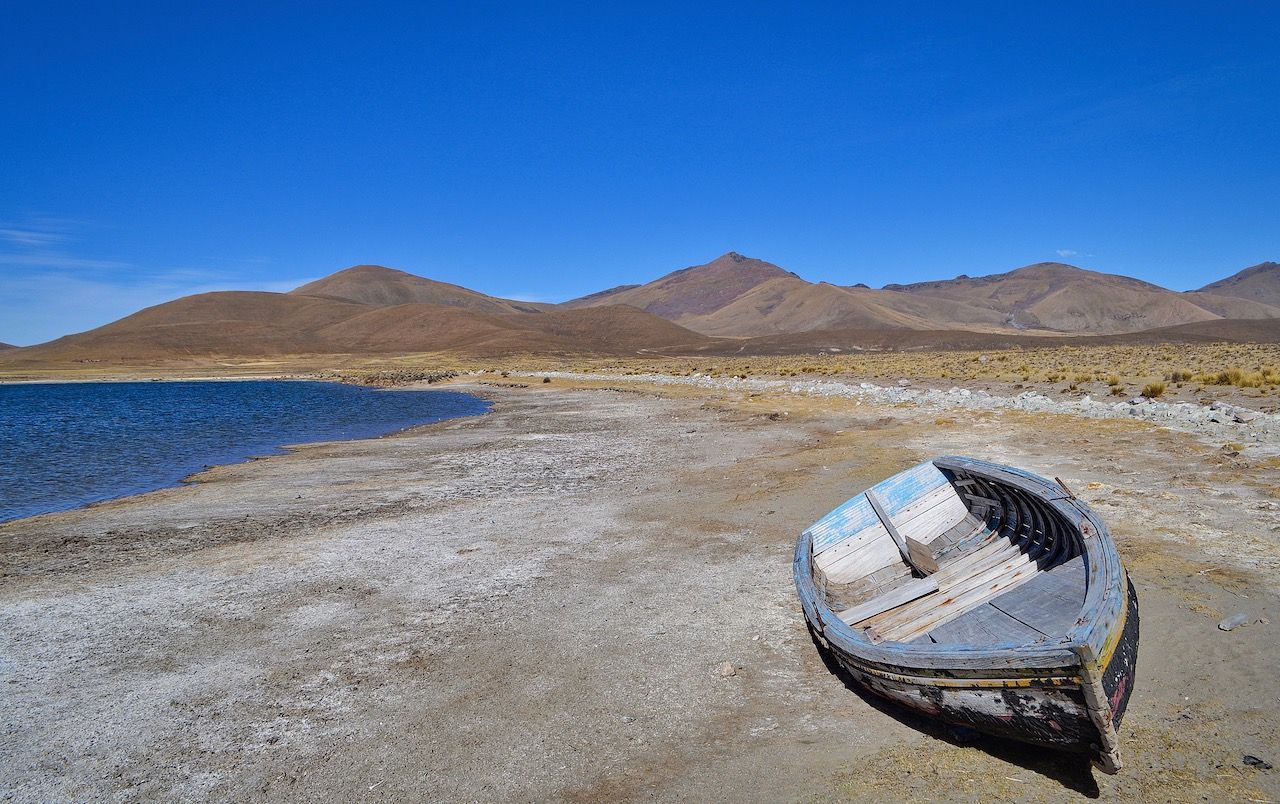 It’s so infrequently visited, you’re unlikely to encounter other visitors, making it possible to explore for days only making contact with local indigenous people tending their sheep and cows. This is a place where outdoor lovers can meander along the isolated sparkling coastlines of saltwater lakes, slide down whistling dunes devoid of a single footprint, and gaze up in awe at soaring endangered condors looping to and fro across towering plateaus and peaks.

And if nature doesn’t inspire, the cultural and historical value surely will. The tiny settlements harbor charming pastoral huts, picturesque adobe churches, and genuine shepherds pushing their flocks to the horizon as soon as the sun rises. Free range cows trickle through the prickly paramo and into the icy lagoons laced with thousands of lazy flamingos. If you can find it, the Cordillera of Sama Biological Reserve even boasts one of the last remaining segments of an original Inca trail. 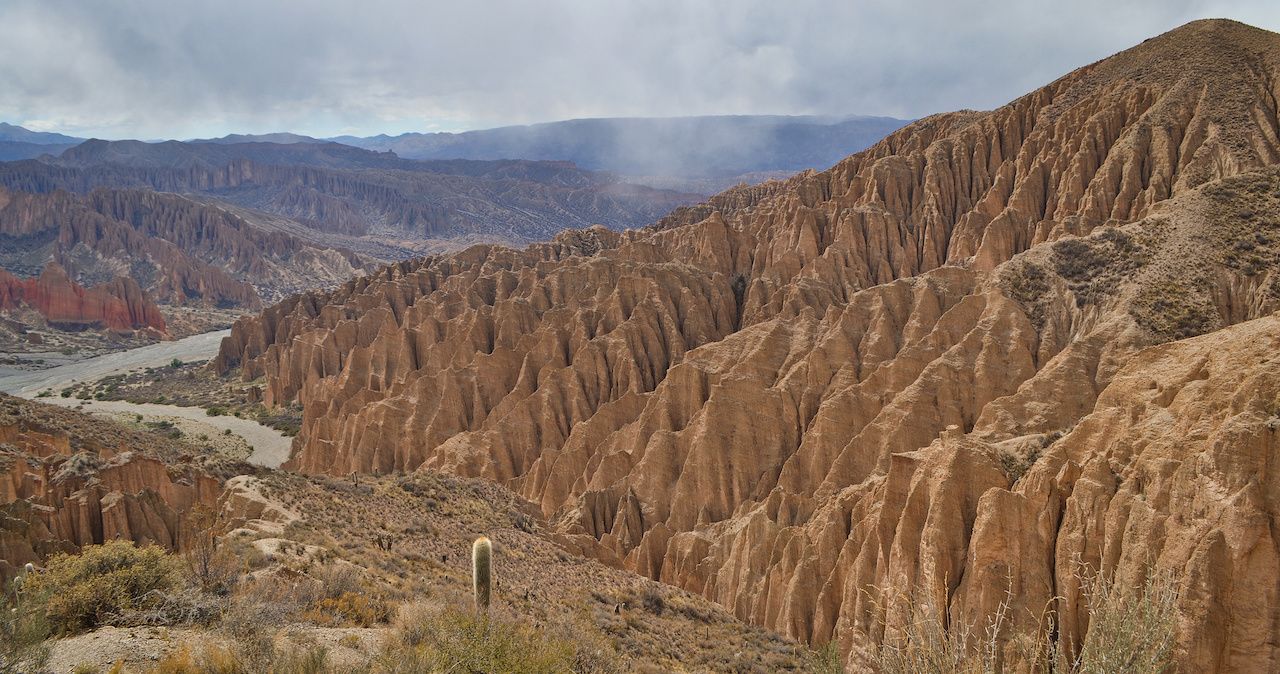 Head 87 miles northwest from the Sama Reserve, in the direction of the city of Uyuni (another 130 miles away) and you’ll stumble across Bolivia’s very own sector of the Wild West known as Tupiza. About as eclectic as it gets, the dusty city indeed suggests a link to the North American comparison both in scenery and tomfoolery. 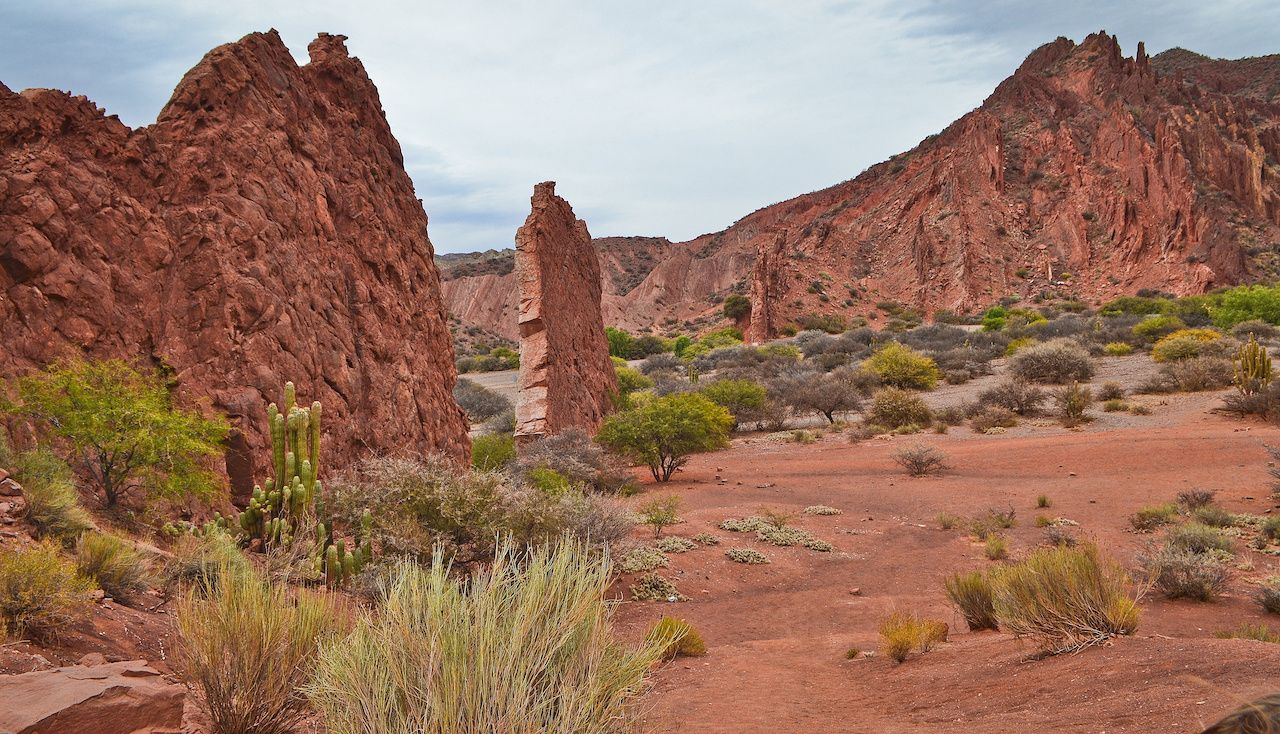 As the story goes, the legendary Wild West outlaws Butch Cassidy and the Sundance Kid ended their long bank-robbing reign right here in the middle of desolate Bolivia. Contrary to the events in the Hollywood movie named after the felons, Butch Cassidy shot his partner dead before committing suicide here. It all happened in the wake of being discovered by the local authorities. The small city contains many noteworthy sites related to the event or named after the duo.

However, the real secrets of Tupiza lie in the rugged outlying areas. The seemingly unnamed panorama manages to puzzle together the iconic North American Southwest landscapes of Utah’s Red Rock Canyon, the Grand Canyon, and the Badlands into one gripping expanse in remote Bolivia. 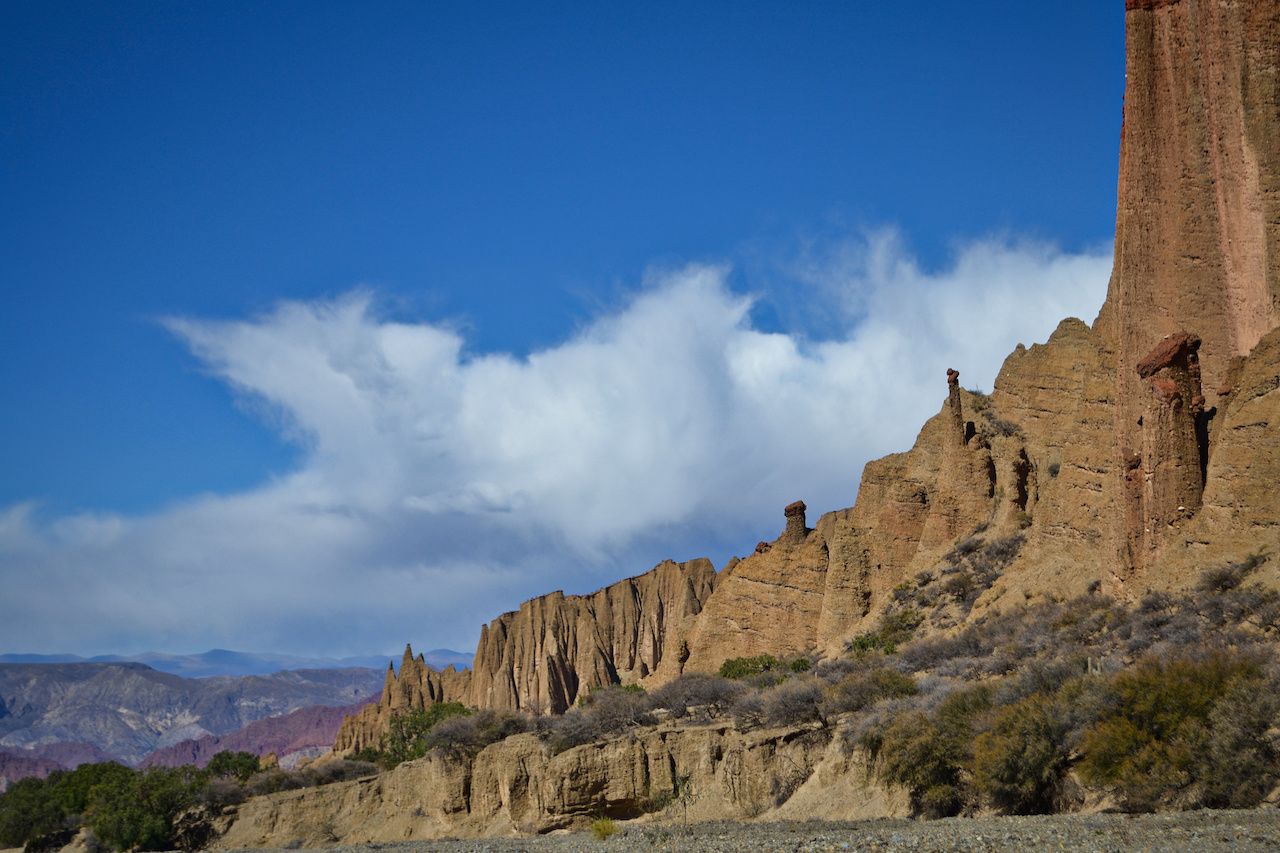 Although there isn’t an official park (hence, no entrance fee), landmarks with quirky names can be visited independently, including notable sites like Puerta del Diablo (Devil’s Gate), Cañon del Inca (Inca Canyon), La Silla (The Seat), and Valle de Los Machos (Valley of the Males), so named for its tall rock formations. Although you can explore the area by horseback, biking, or hiking, the best way to see the vast terrain is by an off-road excursion through the dirt roads that trail from the wells of river beds to the cloud-scraping tips of colorful peaks. 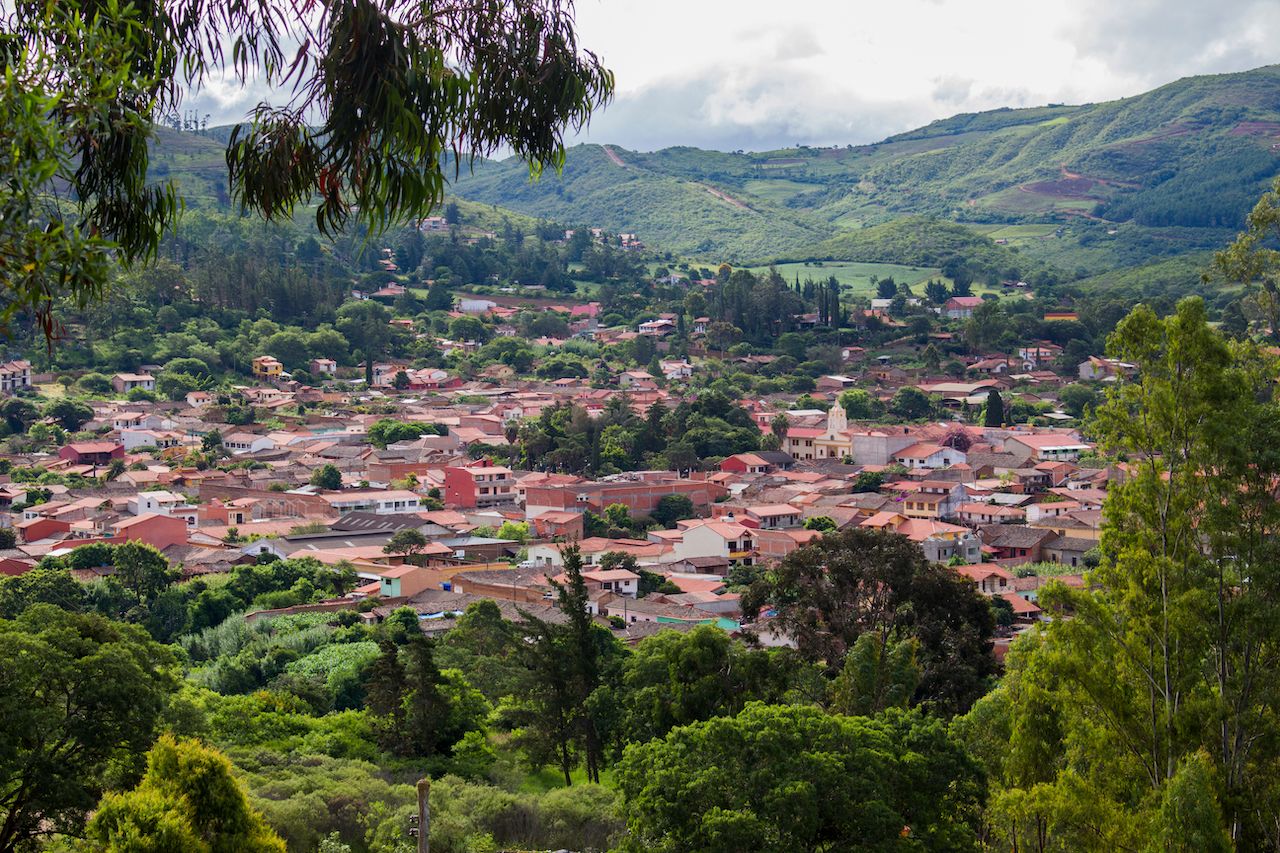 Samaipata is a tiny, isolated village, home to barely 5,000 residents, which rests in the foothills of the Andes about 75 miles southwest of Santa Cruz. This side of Bolivia, east of the Andes range, is much lusher, and Samaipata borders the southern edge of the acclaimed Amboró National Park.

The picturesque small town claims a surprising international heritage. An expat hub of sorts, Samaipata is home to dozens of nationalities that have inspired the local architecture, cuisine, and cosmopolitan vibe. Despite the interesting influx of cultural influence, Samaipata also holds onto its roots — offering a fantasy-like haven for exploring rituals and a UNESCO World Heritage Site linked with pre-Inca tribes. 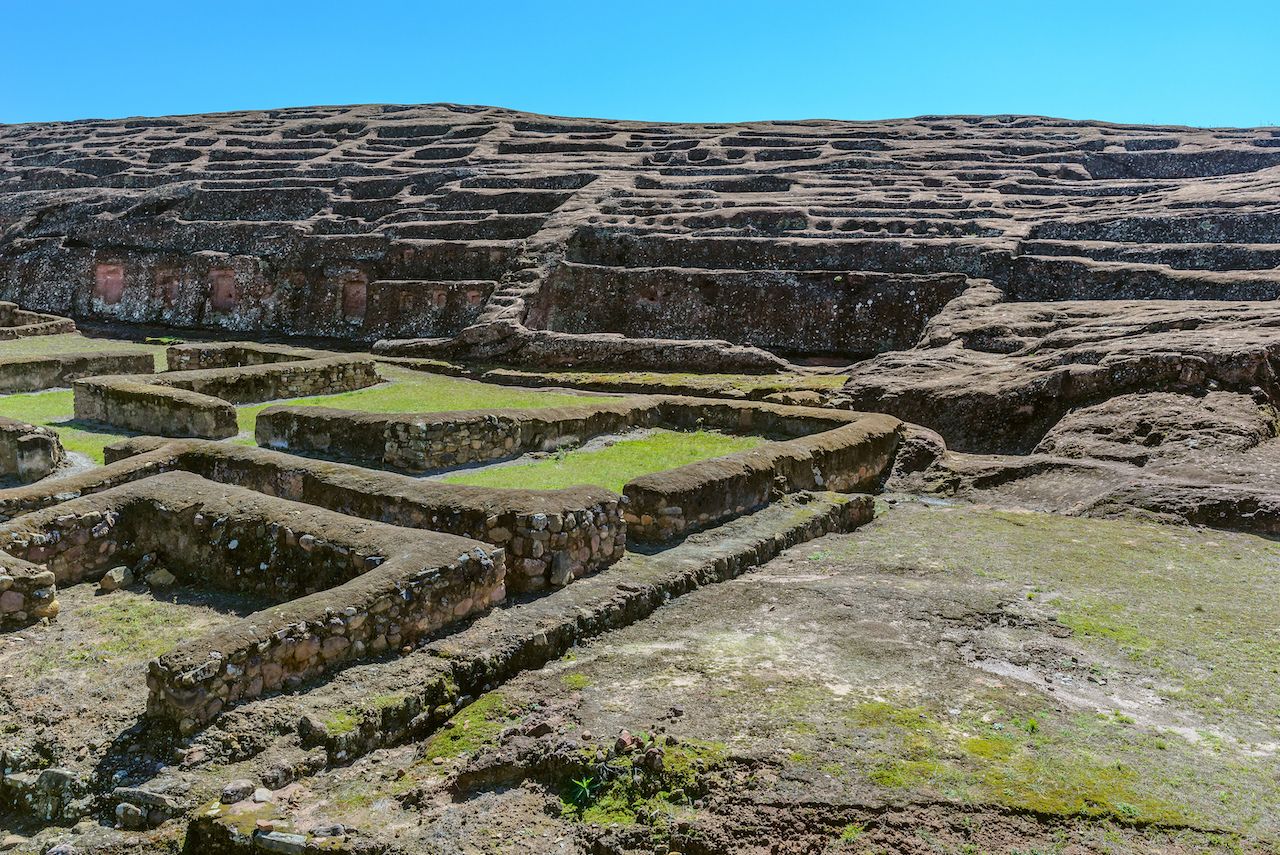 A particular point of interest is the Samaipata Fort, a fascinating site which collectively preserves not one but three ancient cultures. Although referred to as a fort, typical ruins are not on display here. Instead, the remains are embedded into what has been called the largest rock formation in the world. Believed to have been first carved by the pre-Inca Chanè warriors as a ceremonial place, the locale was subsequently taken over by the Inca, and then the Spaniards who eventually founded Samaipata.

Today, El Fuerte de Samaipata still serves as a center where visitors can witness the traditional indigenous festival that celebrates the Amaya New Year, which takes place annually on June 21, or the Winter Solstice. This is considered the most important holiday in Bolivia, and indigenous civilizations have been celebrating this date for centuries in accordance with their agricultural calendar. 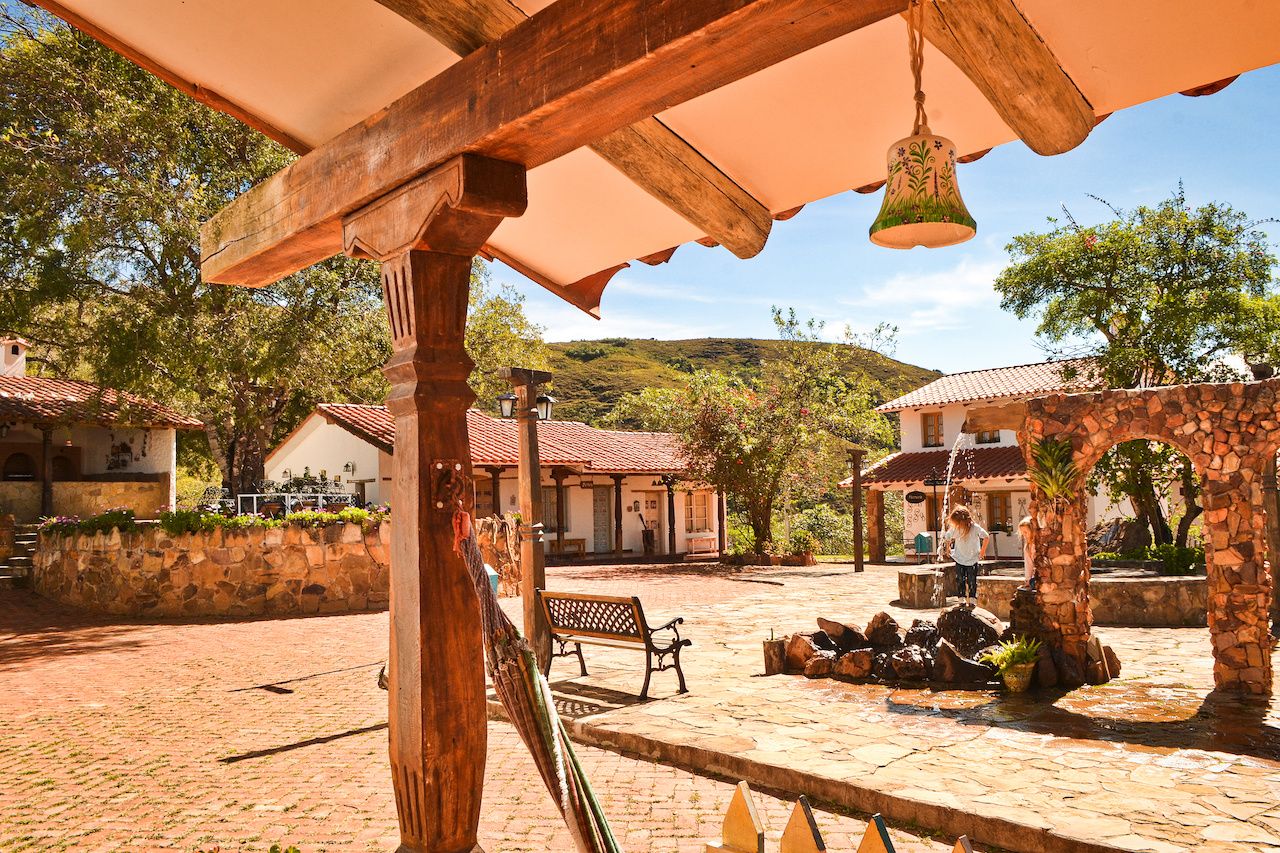 Those who do make it to Samaipata shouldn’t leave without spending an afternoon or a night at the El Pueblito Resort. Perched on a hill high over Samaipata, the village at El Pueblito Resort is a place suspended in time, mimicking the pages of a European storybook. From the historic plaza and brick streets to 12 intricately designed suites and houses, each space has a distinct theme to memorialize a historic town. Visit the Baker, the Butcher, the Dressmaker, the Bank, or stay in the Clockmaker, the Tavern, the Library, and more.

Tips for traveling in Bolivia 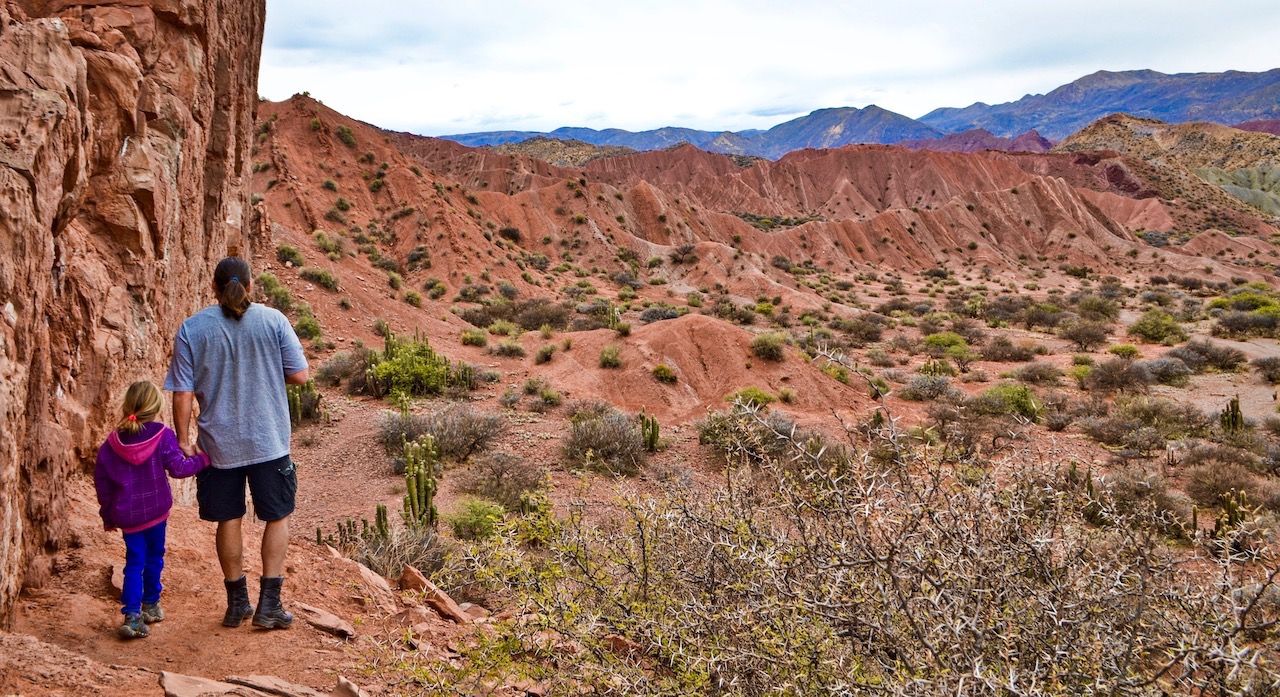 Although you can reach each of these Bolivian treasures by bus year-round, Bolivia is best explored with an off-road vehicle in the dry season between May and October. Be aware that the coldest months, June and July, can dip down to 25 degrees Fahrenheit, although daytime temperatures still hover around 60 degrees. All of the places on this list are located in high altitude environments, from 5,200 feet to more than 15,000 feet in altitude.

Take time to acclimate before hiking or exploring, and take advantage of any coca products offered it. Although coca leaves do come from the cocaine plant, possession and consumption of the leaves are legal. Coca leaves have been chewed for centuries by indigenous populations as a natural remedy for altitude sickness. It’s affordable, safe to consume, and available in the form of raw leaves, tea, and candy.

Insider Guides10 Things I Wish I Knew Before Visiting the Uyuni Salt Flats, Bolivia
Tagged
National Parks Insider Guides Bolivia
What did you think of this story?
Meh
Good
Awesome

5 Things To Know Before Traveling To Bolivia

Is Bolivia a Sign That Latin America's 'Pink Tide' Is Turning?

Here Are the Cheapest Places To Travel in South America 2017