Few things define an American summer more than pitching a tent, building a fire, and posting up on a foldable chair with a drink and a story to tell. Camping has defined our relationship with the outdoors like nothing else ever could — allowing us to connect with nature and wake up to her sweet embrace. It’s the quintessential American pastime, revealing the importance of conservation and our bond to the natural world. Though militaries and indigenous peoples have camped for thousands of years, it wasn’t until the late 1800s that camping became a preferred leisure activity for so many Americans. Here’s how this most primitive of activities became so popular. 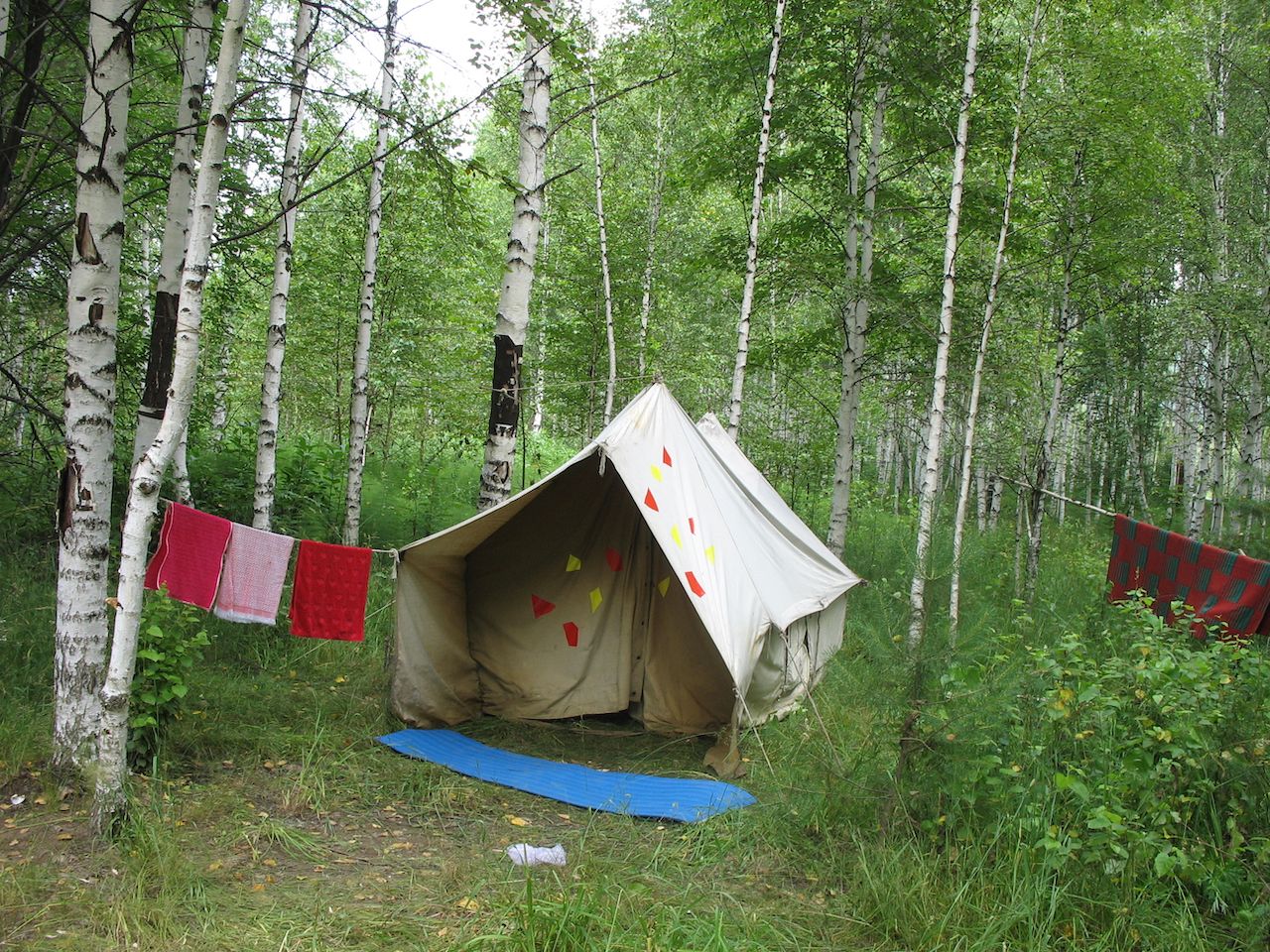 In 1861, a schoolmaster named Frederick Gunn created Gunnery Camp in Washington, Connecticut, and led schoolboys on a two-week excursion into the backcountry. There, the educator sought to instill in his students his belief in our connection to the undeveloped world through a set of life skills including fishing, exploration, and cooking over an open fire. Sleeping in nature was part of the lesson plan, too, and Gunnery Camp became the country’s first recreational campsite.

Today considered the father of recreational camping, Gunn was a naturalist and staunch abolitionist who epitomized the American ideal that all are created equal and that the best place to realize our potential was in nature. “The ideal school is set in the country, or, if in the city, the generous city fathers have afforded it liberal space with trees and flowers,” he proclaimed.

Six years earlier, an officer with the US Army modeled a “bell tent” after Native American teepees, though it wasn’t until a Boy Scouts guidebook in 1911 that the concept of the pitchable tent was widely embraced outside of the military. 1869 saw a church minister named William H.H. Murray release a book entitled Adventures in the Wilderness, a surprise hit that implanted camping in the minds of urban dwellers. It was as much a guidebook as a wilderness tribute to the Adirondack Mountains, and over the following two years, its popularity sent tens of thousands of Americans into the Adirondacks to camp for the first time. 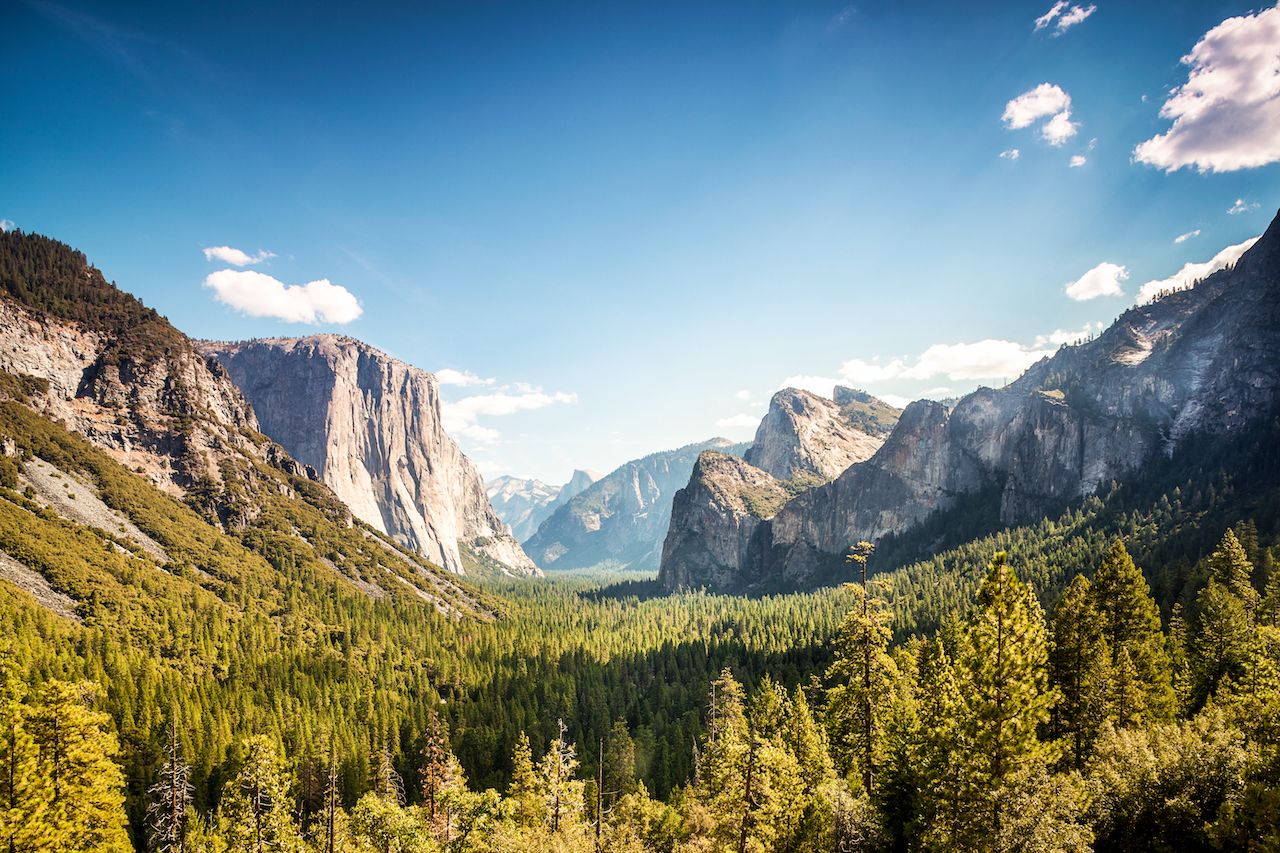 By the end of the 19th century, the craze had begun to take a firm hold on the American psyche. The YMCA had by this time established multiple campsites for members including Camp Dudley in Westport, New York, which is still in operation today. By 1912, both the Boy Scouts of America and the Girl Scouts had established campsites across the United States and led regular excursions to them. But it was a three-day period in 1903 that would forever change Americans’ perception of voluntarily sleeping outdoors.

In May of that year, legendary conservationist John Muir took Teddy Roosevelt camping in Yosemite. The two stared in awe at Sentinel Dome, camped at Mariposa Grove, and in the Yosemite Valley, Muir urged Roosevelt to protect the area, a notion Roosevelt took to heart. The trip directly inspired the burgeoning conservationist movement and vicariously inspired the creation of the National Park Service itself. President Woodrow Wilson established the National Park Service 13 years later, officially bringing “America’s greatest idea” to life and making it possible for Americans to view, and sleep near, some of the country’s most pristine and beautiful landscapes.

“National parks have long been special places for visitors to connect with the great outdoors, tap into the healing power of nature, and enjoy quality time with family and friends,” the National Park Service’s Office of Public Affairs told Matador via email. The parks still serve as the easiest way for Americans to get out and camp. “Camping in a national park is an easy, and affordable, way for families and friends to make lasting memories together.”

Between 1930 and 1939, the National Park Service established more than 30 of what were then known as Recreational Demonstration Areas across the country. These areas, effectively government-run campsites outside of the parks themselves, gave Americans not affiliated with a scout troop or other private organization even more designated — and managed — places to camp.

How camping came to have its defining characteristics 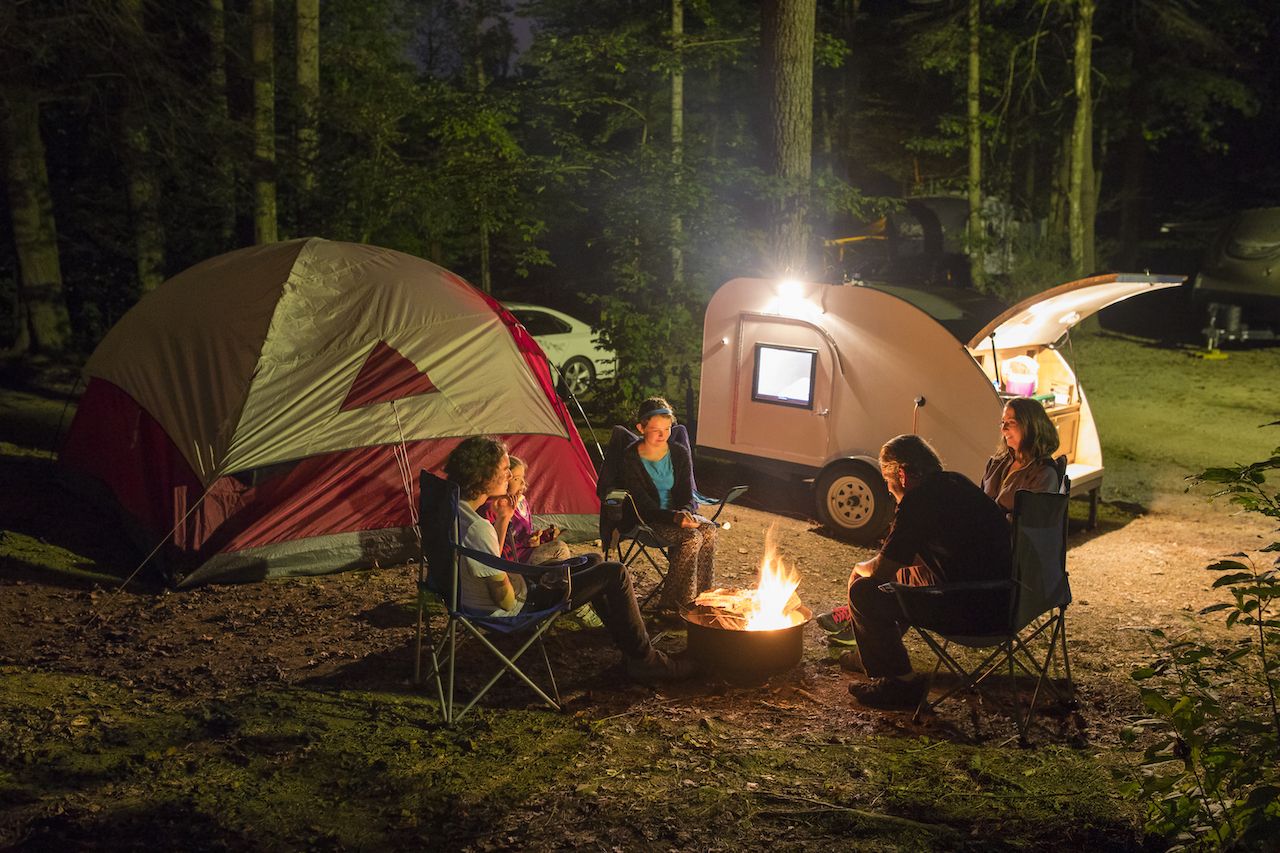 Camping’s biggest boom followed the end of World War II in 1945. Relieved of the war’s taxing of the country’s economy, labor force, and mental wellbeing, millions of Americans headed into the woods over the ensuing 20 years. They had stories to tell, time to kill, and a constantly evolving recreational gear market that made civilian versions of outdoor equipment previously available mostly in military circles. These included modern camping lanterns, fire starters, backpacks, and sleeping bags, among other items. The eureka moment happened quite literally in 1959 when the company Eureka! released a tent that the average person could set up in minutes, easing what had previously been camping’s most daunting task.

Less time needed to set up camp led to more leisure time. Traditions were formed, such as roasting marshmallows over the fire, and gear companies created tools to streamline the process for the masses. The growth of packaged, dehydrated, and freeze-dried foods that can easily be cooked over a fire or camp stove also increased relaxation time and further boosted the activity’s appeal.

Successful public lands management has also contributed to camping’s increasing popularity. Beyond car-side campsites, fishermen, hunters, hikers, and others who make frequent use of protected public land and wilderness areas have embraced camping because it keeps them close to their activity and, in the case of backpackers, is a necessary component. Advances in gear technology have made camping doable year-round — though winter snow camping isn’t for the first-timer.

Since the 1970s, the trajectory of camping’s popularity has resembled the dream of every Wall Street investor: consistently up and to the right. The advent of the modern minivan, in the form of the Plymouth Voyager and Dodge Caravan, in the early 1980s gave middle-class families enough space to load up their kids and camping gear. This made the activity an attainable weekend ritual that didn’t necessitate much advance planning and could include everyone.

Millions of kids who came of age in the 1970s and ‘80s had camping instilled in them during childhood, and if the numbers are any indication, they’ve sought to pass on the memories to their children. It seems to have worked. Nearly 79 million North American households camped in 2018, according to the Kampgrounds of America, or KOA, North American Camping Report. A striking number, though not limited to tent camping, that has increased year-over-year since at least 2014.

In the end, part of camping’s popularity stems from its ability to bring families and friends together — in the best of times and the worst of times.

“Camping really does refresh both body and soul,” the National Park Service’s Office of Public Affairs told Matador. “It provides the opportunity to go on hikes, attend a campfire program, gaze at the stars, tell stories around the campfire, and, most importantly, connect to nature and others.”

Food + DrinkThe best food to make while camping, according to chefs
Tagged
Camping
What did you think of this story?
Meh
Good
Awesome

The US ranks second in the world for skinny dipping

9 tips for RVing in the mountains

Your family can get paid $1,500 just to sleep in a tent in your favorite campground

Everything you need to stay warm and cozy for fall camping