Though early depictions of St. Patrick, who’s revered for bringing Christianity to Ireland, dressed the missionary in blue, it only takes a nanosecond at a 21st-century St. Patrick’s Day celebration to confirm that the color scheme has changed.

Today, green is the definitive color of St. Patrick’s Day, which Irish immigrants in the US evolved from a feast honoring St. Patrick’s death to an all-out, monochromatic party. The beer is green. The gaudy shamrock glasses are green. Even a quarter-mile of the Chicago River runs green for the patron saint of the Emerald Isle.

The tradition began in 1962 when Mayor Richard J. Daley dumped 100 pounds of fluorescein dye into the Chicago River for St. Patrick’s Day. As the story goes, the former business manager of the Chicago Journeyman Plumbers Union, Stephen Bailey, noticed that a dye used to track leaks stained a plumber’s overalls shamrock green. He shared this with Daley, who had initially wanted to turn the whole of Lake Michigan green. Daley tasked officer Tom Rowan, a policeman responsible for the city’s patrol boats, with dyeing the river. Rowan brought in a co-worker, Michael Butler, and together with their sons, the two pulled off the dye job of the century.

A Chicago Tribune article published the following day called the 1962 festivities “one of the most colorful…parades the city has ever seen,” noting that even the river turned “green with envy.” And it stayed that way for an entire week.

Today, some 400,000 spectators gather to watch the river’s annual transformation before Chicago’s St. Patrick’s Day festivities kick off. It’s a citywide tradition, but for the Rowans and the Butlers, the yearly dye is more than that: It’s a birthright.

Every March since 1962, members of the Rowan and Butler families have loaded into two boats at 9:00 AM on the day of the parade to create the city’s St. Patrick’s Day centerpiece. The duty has been passed down for generations and honored in rain, shine, and even snow.

At least one thing has changed over the years, however: Following environmental outcry over the original, oil-based chemicals used to dye the river, a new, vegetable-based dye was introduced in 1966. Now, 40 pounds of this dye gets released into the Chicago River for St. Patrick’s Day every year, creating a colorful effect that lasts roughly five hours.

What it is, exactly, that turns the water green remains a mystery. The select few involved in Chicago’s river-dyeing process have sworn the dye’s ingredients to secret. 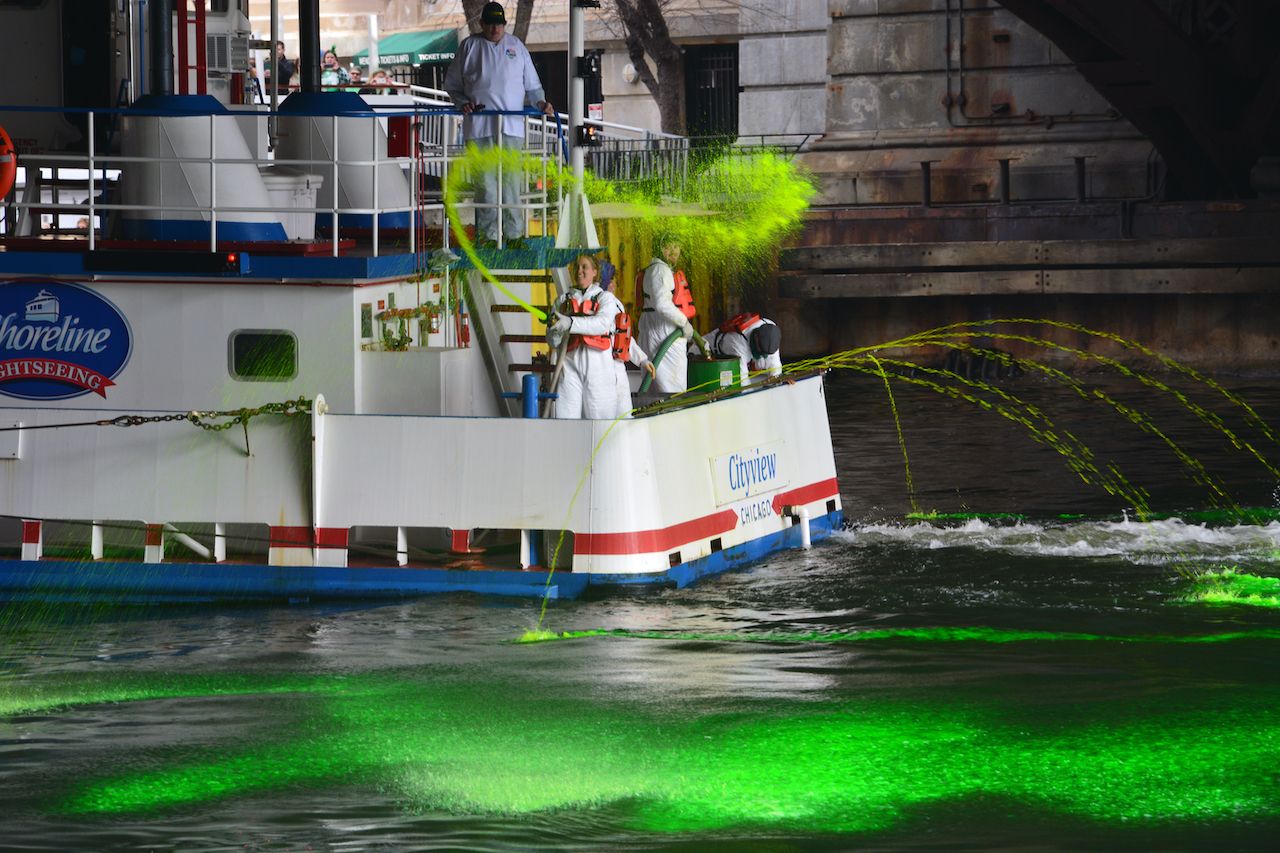 What we do know is, ironically, that the colorant is a biodegradable powder that appears orange until it’s exposed to water. Both Tom Rowan and festival officials have assured environmentalists that it’s non-toxic. The Illinois Environmental Protection Agency has deemed the dye safe, and the National Resources Defense Council has said that it’s not an ecological concern. Some have likened it to food coloring, not unlike the dye found in all that green beer.

Nonetheless, environmental pushback persists. Among the biggest opponents of the tradition is the Friends of the Chicago River nonprofit dedicated to keeping the river clean. 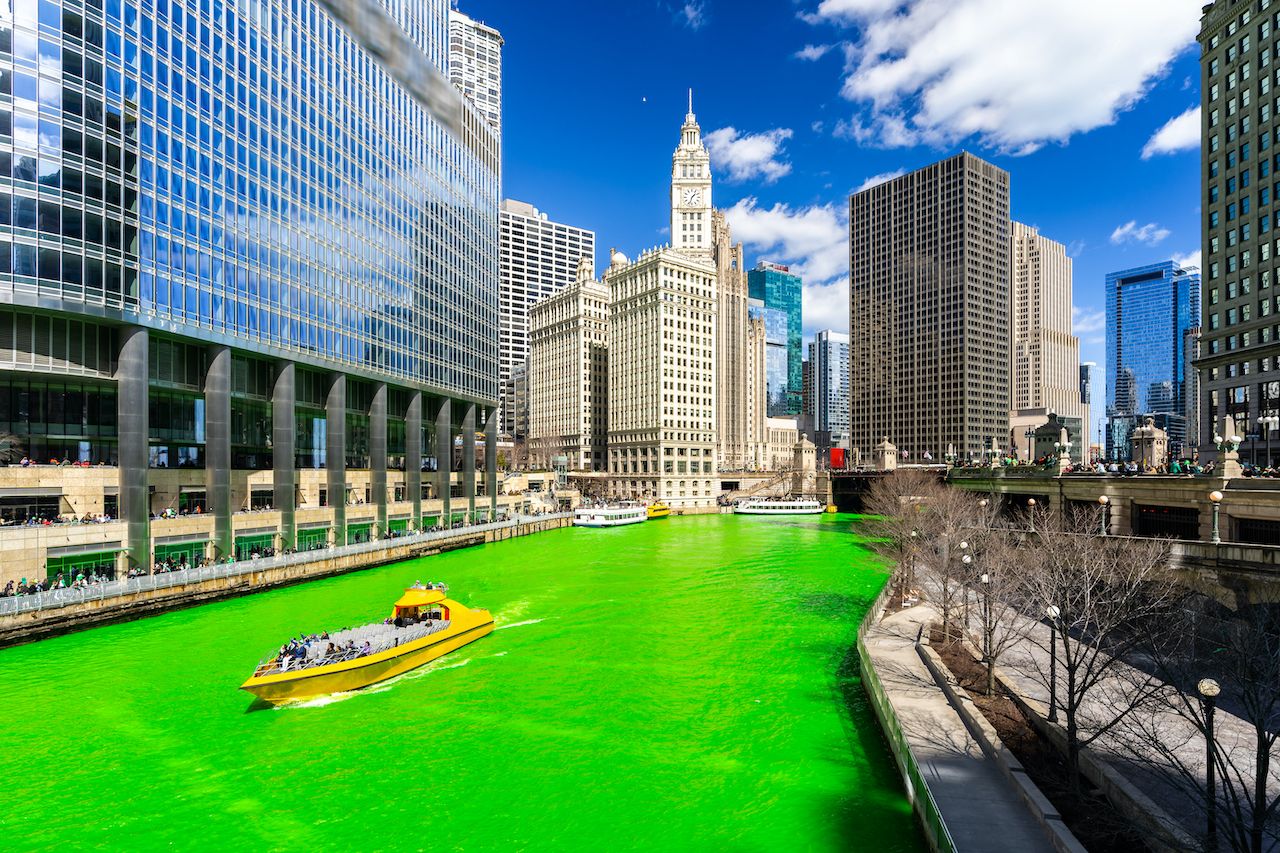 Though the organization has conceded that the dye itself may not be harmful, it argues that the very practice of using it fosters an unhealthy relationship between Chicagoans and their river. Rather than view the waterway as an accessory to be customized for cultural events, the argument goes, the river should be seen and respected as the habitat that it is.

A longtime poster child for pollution, the Chicago River has seen considerable improvement in recent years. In 2015, the Illinois Pollution Control Board improved the river’s water quality standards. Around 70 fish species can now be found in the river, where only a handful used to survive. Even river otters have been spotted again after roughly 100 years.

Chicagoans are unlikely to forfeit their electric green river this March or any St. Patrick’s Day in the near future, despite the concerns raised by groups like the Friends of the Chicago River. Though it may comfort environmentalists to learn what’s in the secret, allegedly sustainable dye regardless of its environmental impact, maybe, just maybe, the mystery behind Chicago’s fluorescent green river is part of the city’s St. Patrick’s Day magic.

TVIrish shows to watch if you can’t make it to Dublin this St. Patrick’s Day
Tagged
Festivals Chicago, IL, United States
What did you think of this story?
Meh
Good
Awesome

Everywhere you can see the Frida Kahlo immersive exhibit in 2022

A chilling “It”-themed pop-up bar is coming to Chicago

Chicago is offering $5,000 for innovative ways to dine outside this winter

Chicago is getting an immersive ‘Schitt’s Creek’ pop-up experience

The 12 most festive places to celebrate Christmas in Europe