Most Americans are familiar with the fizzy sound that bubbles off a carbonated beverage. But a low-stakes, highly opinionated argument erupts now and again over what to call this fizzy drink. Is it a soda, pop, or coke? The truth is there are no apparent differences between the names (except for coke, but we’ll get to that). What you have is a battle between regional dialects that can’t necessarily be won — the language in your area probably won’t be changing anytime soon. Cartographer Alan McConchie has been surveying visitors on his website, popvssoda.com, for more than 20 years, asking visitors simple questions: What word do they use when referring to a fountain drink, and what city and state is their hometown in? His website, which has collected over 400,000 responses, populates a coke vs. pop vs. soda map showing the differences in language across the United States. 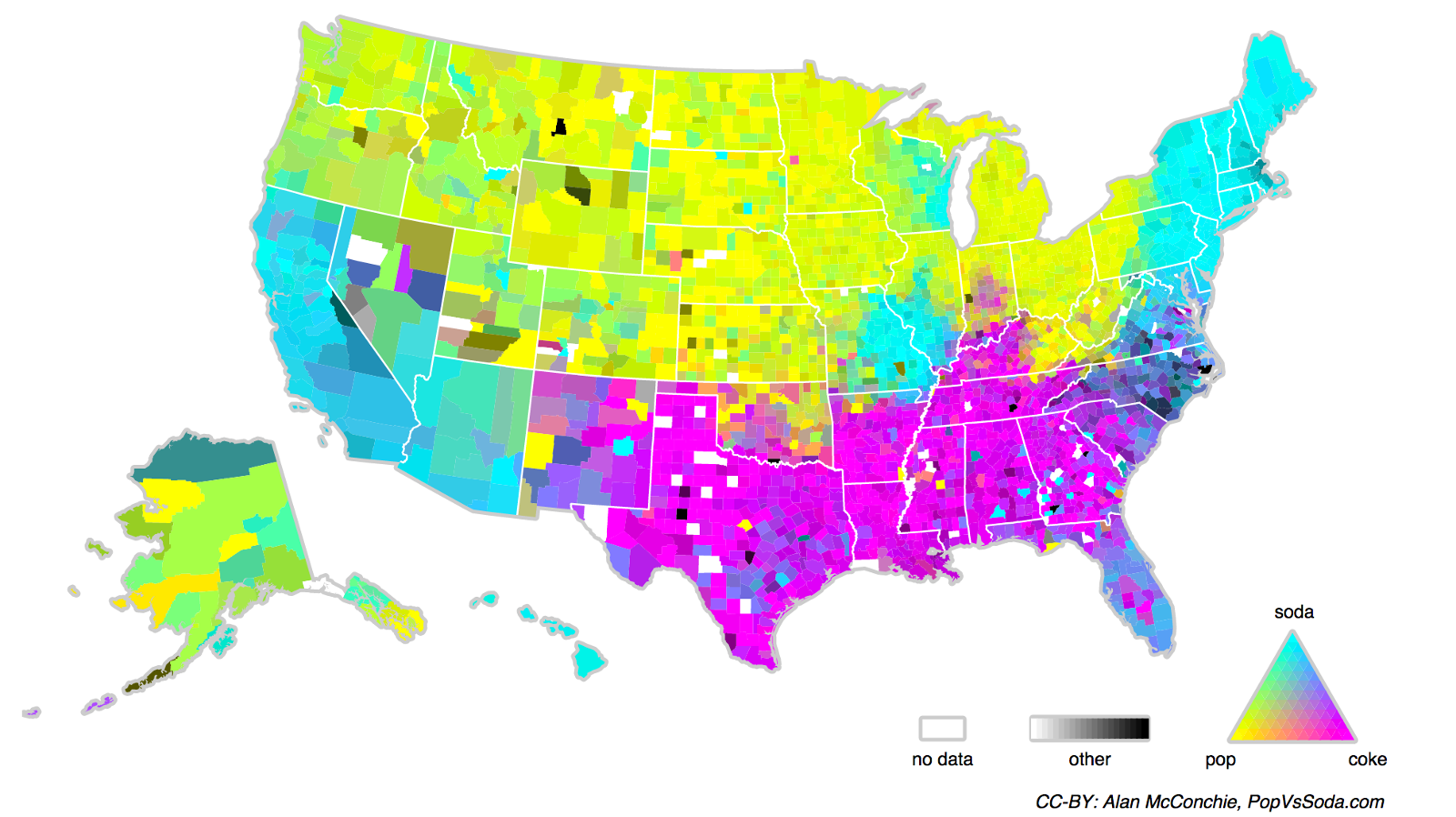 When looking at McConchie’s map, for the most part, there are relatively straightforward regional borders when it comes to who uses coke vs. pop. vs. soda. Team soda populates the coasts with an interesting hot spot in Missouri. For example, being from California, I am team soda exclusively and with full conviction. Whereas pop has taken over a significant area of the country, covering the northern regions of the country and the Midwest, and coke dominates the south, even though the rest of the country uses coke exclusively to refer to Coca-Cola. John Kelly, the associate director of content and education at Dictionary.com, says there’s something interesting about why people continue to debate the correct name for a carbonated beverage.

“It’s sort of like watching the Super Bowl,” Kelly says. “It’s something that everyone has a low stake point of view on and our differences here can actually bring us together and get us talking about what we said when we were kids [vs.] what we say now. I grew up in Cincinnati, which is a pop region, but over time due to having lived overseas California, Texas for whatever reason I end up saying soda more often. It could also be because I think as a culture, we all drink less soft drinks. And it can also be because you can’t turn around without being bombarded with like 90 different flavors of sparkling water. So I say soda and pop. I’m gonna have it both ways.”

Kelly is a professional linguist who broke down the origins of each term. Pop is an onomatopoeia. Originally, soda pop was more commonly served in glass bottles that, when opened, would make a popping sound when you unscrewed the top. On the other hand, the word soda is derived from sodium bicarbonate, which is more commonly known as baking soda and was used to make fizzy drinks.

“I was thinking through how the regionalisms for soda versus pop actually kind of tell a story of the US population,” Kelly says. “In the 1700s, people in England, Ireland, and the US were using these substances to make drinks fizzy. But in the early 1800s, When these drinks became popular, we got soda water. Around the same time in the 1810s or so, we see pop. And then, interestingly, we get soda pop in the 1860s. I’m not exactly sure why we go from pop to soda pop. It could be because different populations came together we had soda pop, or it could be just because it’s fun. Coke, shortened from Coca-Cola is later on the scene. Coca-Cola was invented in Atlanta in 1892, and we see Coke as a shortened version of Coca-Cola by the early 1900s.”

Coca-Cola predicted (correctly) that “coke” would soon become synonymous with every sweetened carbonated beverage, rather than simply a nickname for that particular product. The company feared sales would drop if it differentiate its product from all the other sodas out there. In 1913 the company actually ad-campaigned to encourage drinkers to ditch using its nickname, using the slogan “Coca-Cola: Ask for it by its full name – then you will get the genuine.”

Dialects often emerge from a mixture of the dominant cultures that live in a certain area, alongside migration and immigration. Black Vernacular English and Southern dialects are influenced by the Caribbean and West African languages and colonizer languages like French and Spanish. Whereas in other parts of the country, you can see the Dutch, English, and Irish influence. Kelly also explains that the coke vs. pop vs. soda map could be explained by following the US migration patterns.

“If you look at soda, you see New England, you see New York, you’re dipping down into Maryland,” Kelly says. “That is the oldest population center for white colonial America. Historically, people from New England, New York, and the mid-Atlantic settled out in [California and Florida]… which is why we see a major hotspot for soda in California and Florida, which is in the south but has a different history [than the rest of the south]. We have a hotspot in St. Louis, also due to migration, as well as Milwaukee, and the Southwest, which was also populated by people coming from east to west…So it might also follow an interesting population shift trail.”

Regardless of where your loyalties lie on the coke vs. pop vs. soda map, Kelly believes it’s a healthy debate, especially at a time when political divides are causing strife across families and communities.

“What I love about this topic… we are so polarized and divided right now. We are red states. We are blue states. But in this case, this fun food fight over soda states, pop states, Coke states. These are differences that can actually bring us together,” Kelly says “It is a welcome point of fun and reprieve and togetherness at a time when language is being used now more than ever to wedge us apart [and] is being weaponized to divide us.”

Food + Drink7 of the Most Unusual and Creative Regional Margaritas From Across the United States
Tagged
Food + Drink Maps + Infographics Languages
What did you think of this story?
Meh
Good
Awesome