NAMIBIA has a stark beauty in its land, which stretches from the Skeleton Coast to the arid landscapes of Kokoland and towering dunes of the ancient Susuvlei desert. The country is also home to diverse religions, languages, and cultures, which have found a way to thrive in this unique environment. 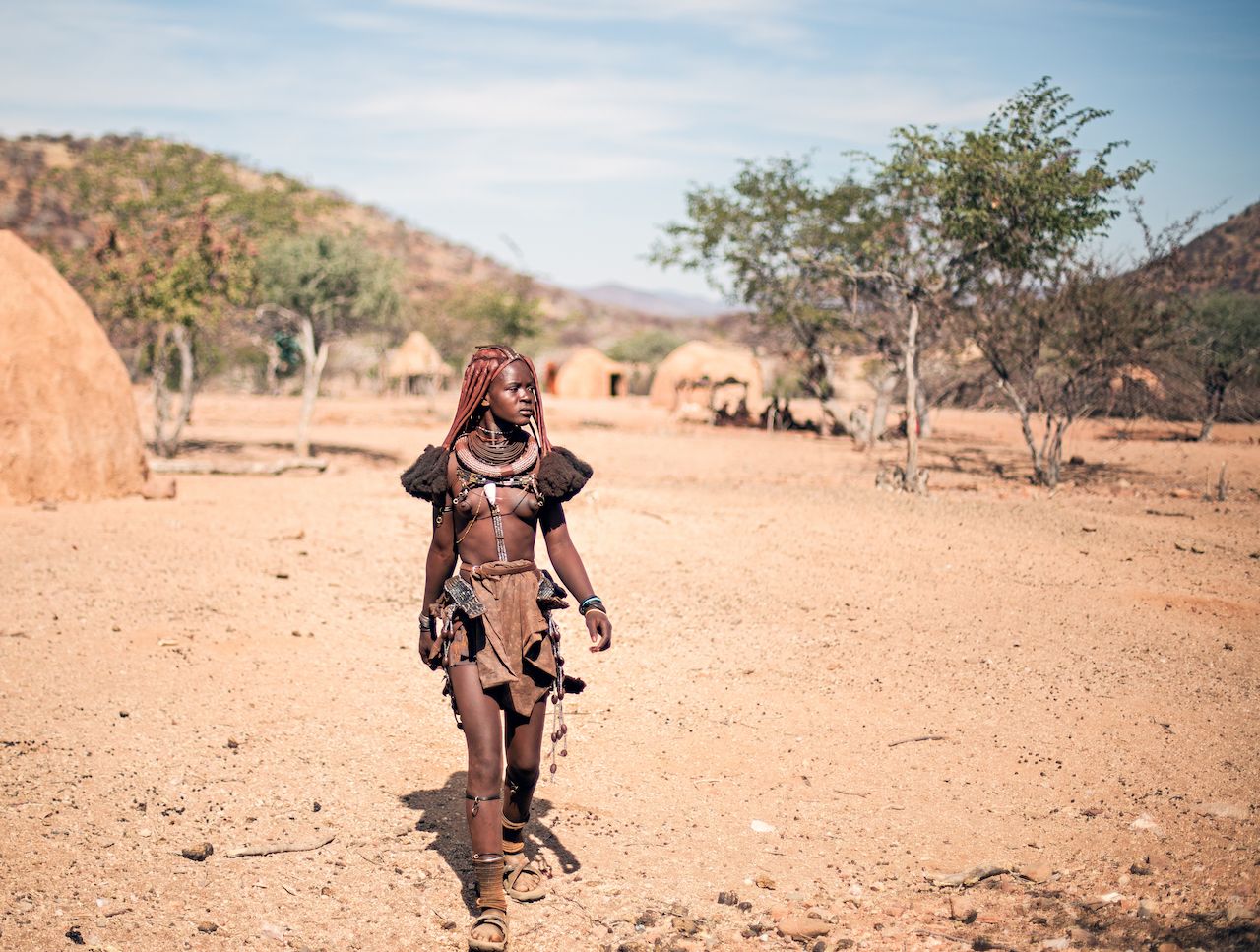 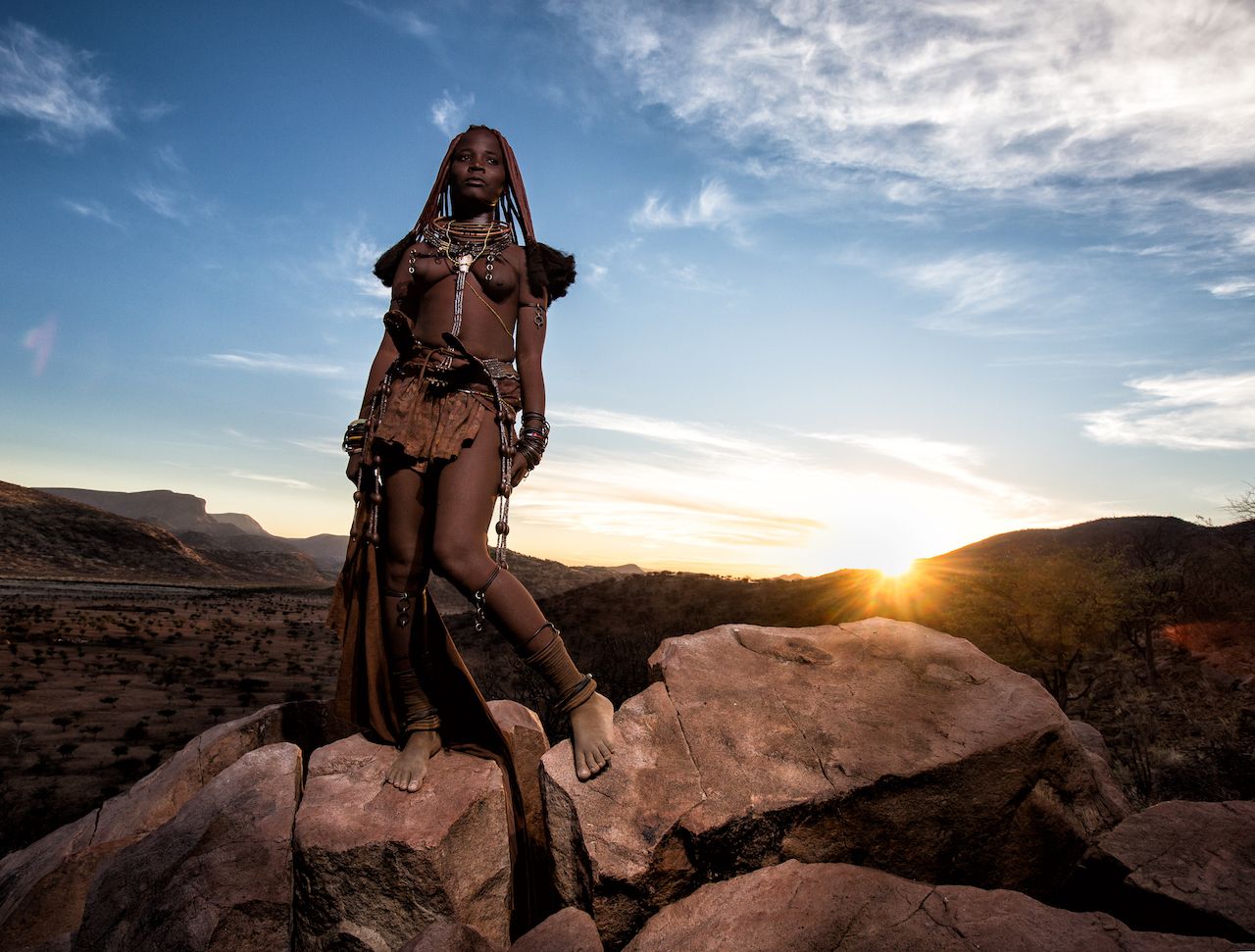 Around the 16th century, the Himba people crossed to Namibia from Angola, settling in Kaokoland (nowadays Kunene) as part of the Herero tribe. A few centuries later, a bovine epidemic swept through Namibia, causing a great loss in cattle. Facing crisis, the tribe decided to move south and explore different regions. Still, despite famine and hunger, some members decided to stay and struggle for survival in familiar territories, asking other tribes for help in searching for cattle or crops.  Impoverished by disease and Nama cattle raiders, the Himba were left without livestock and forced to rely on the land for their survival. Driven by hunger, many Himba fled to Angola, where they were called Ova-himba, meaning ‘beggars’ in the Otjiherero language

People of the Earth 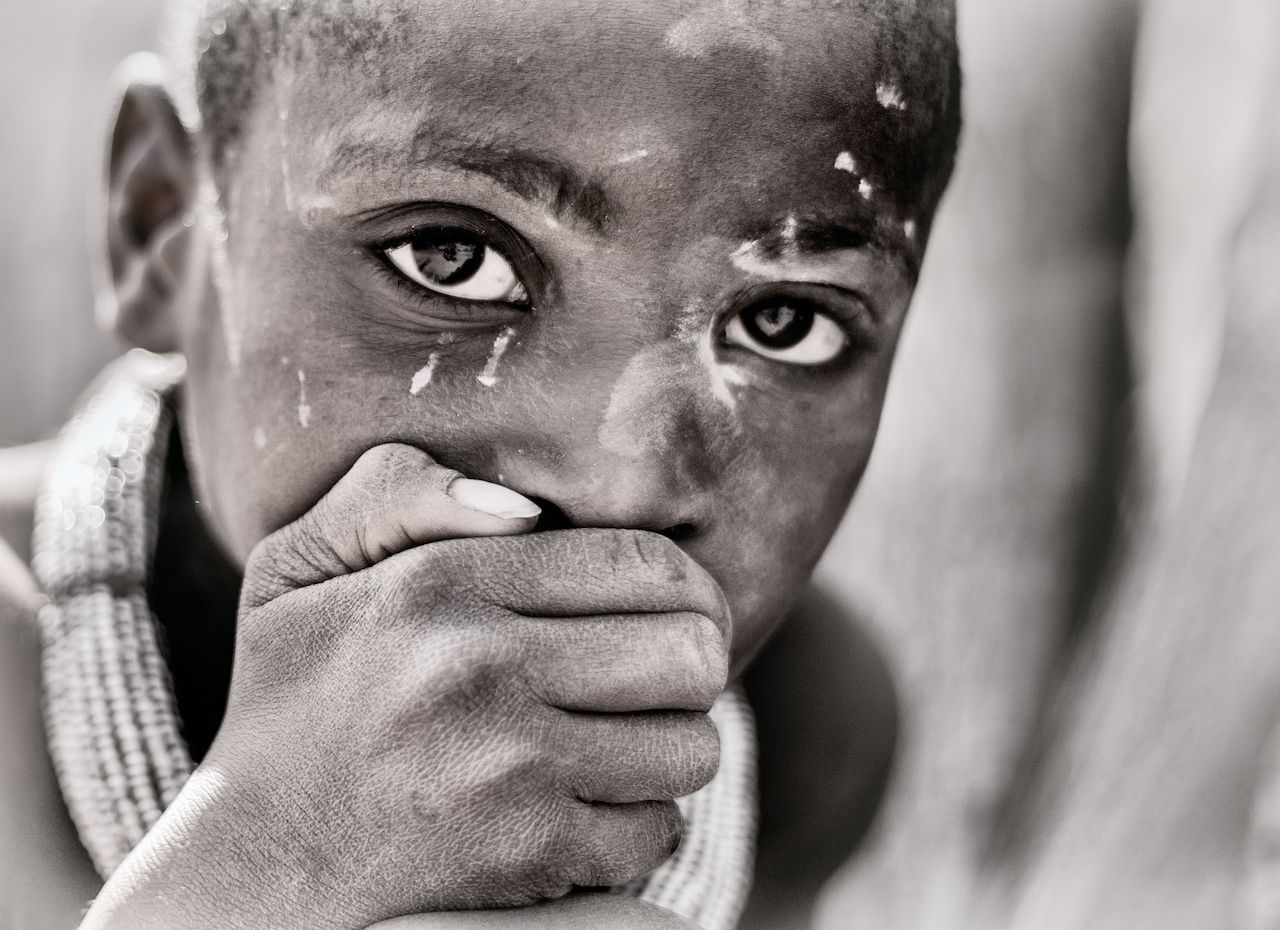 The Himba, as do most indigenous people, live on what nature provides for them. Their diet consists mostly of porridge, meat being reserved only for special celebrations. Like many other tribes living in the area, their survival depends on cows and as a result, a Himba man without a herd of bovines isn’t considered worthy of respect. When the pastures are bare, the tribe will travel to a new location, where their livestock can once again eat their fill. Himba homes are simple huts, made from a mixture of earth and cattle dung and contain little beyond a bed and useful implements such as kitchen tools. Both women and men wear their traditional dress, loincloths and sandals for a man, often with soles made from old car tires. The women wear jewelry and goatskin skirts. 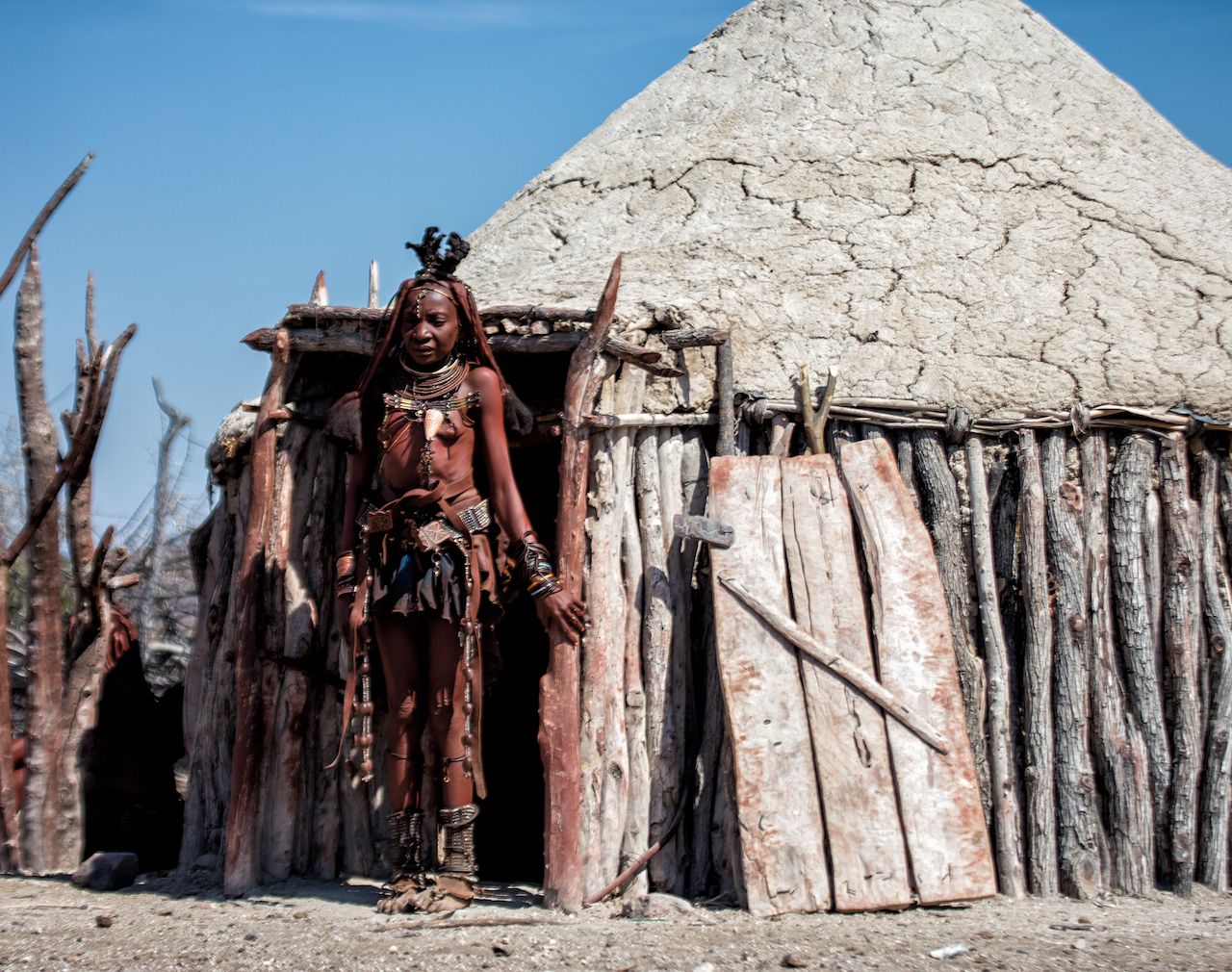 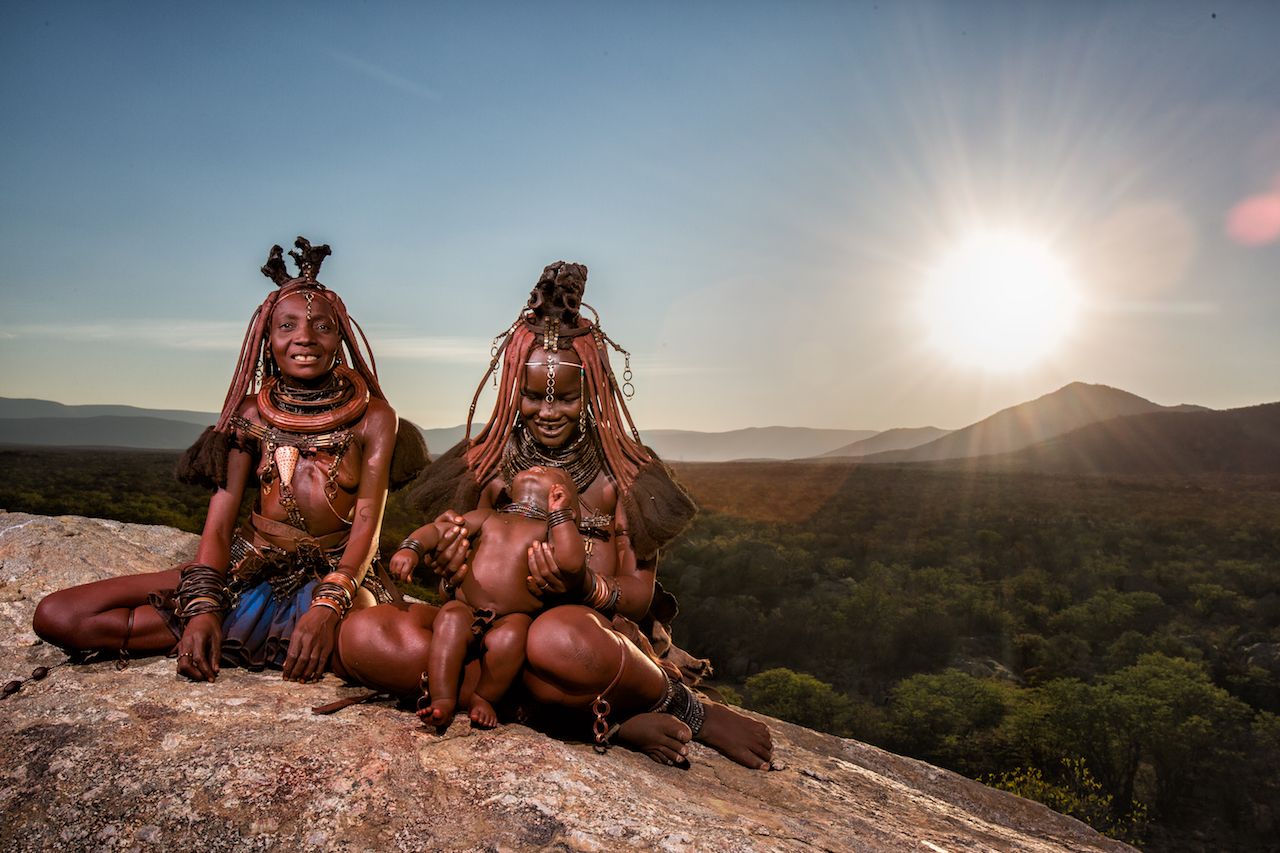 The Himba people practice polygamy, with both men and women being allowed to have multiple partners as long as the arrangement is open and agreeable to all parties involved. Men tend to have several wives, especially if they are rich in cattle, as the animals’ ownership is passed down from mother to daughter. The more cattle a woman owns, the greater her status and that of her family. Marriage is important in Himba culture, but extramarital relations are encouraged by families. When their husbands are away with the livestock, it is common for the women who stay behind to have “affairs” with other men.

All tribe members enjoy full equality of rights, decisions being split between men and women, with an overall authority in the hands of the men but economic issues decided by the women. With the clear division of roles, women have the job of tending to children and livestock. The men lead the livestock to the pasture for the day.

Between the two worlds 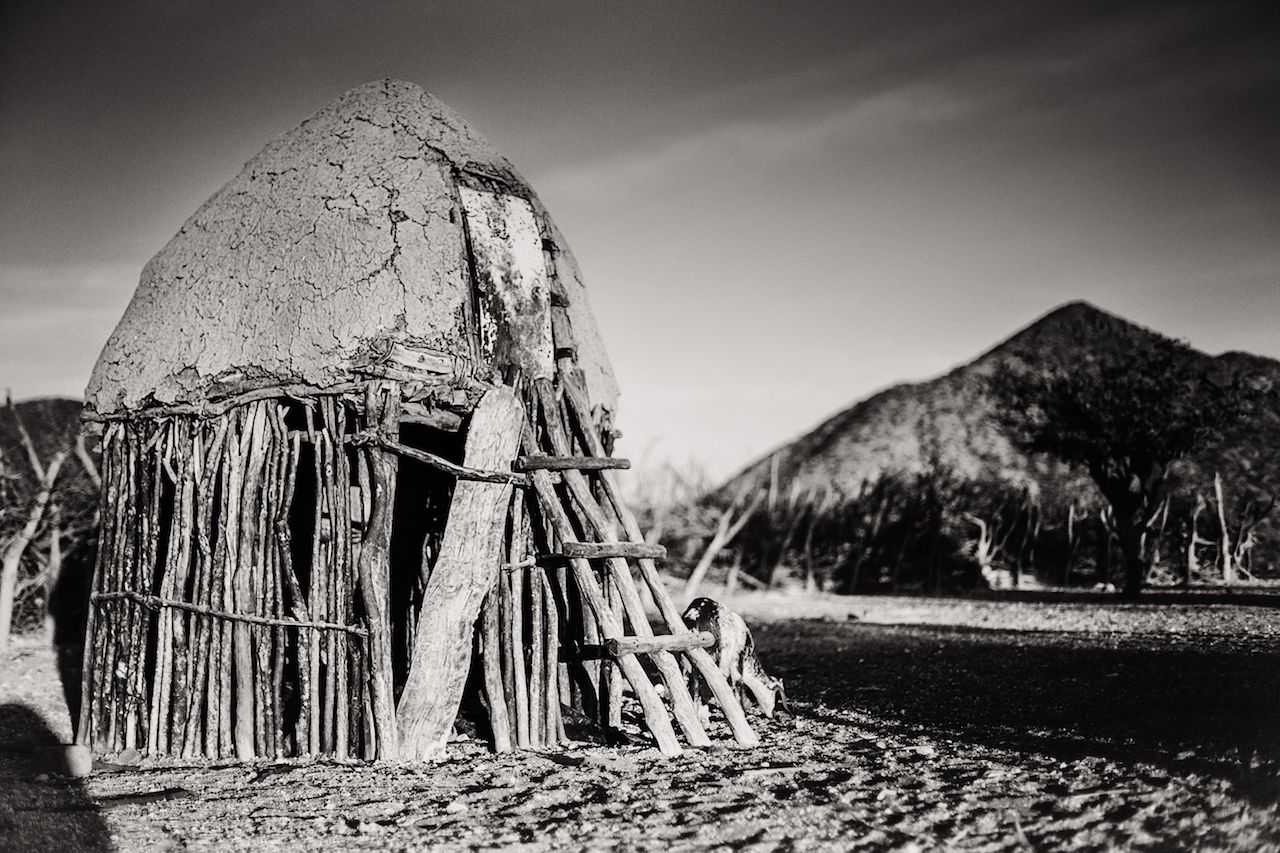 The Himba are animists. Their supreme being is called Mukuru, and a holy fire (okuruwo) is the way to communicate with their God. The fire is kept continuously lit and is a bridge between the living and the dead, the line of communication between the village chief and the ancestors, who stand in direct contact with the Supreme Being. All houses’ doorways face away from the holy fire, with the exception of the chief’s house, which is lit by the sacred glow both day and night, assuring his link to the other side is never interrupted. The holy line starts from the main entrance of the chief’s hut and goes straight, passing the holy fire, to the entrance of the cattle enclosure. Holy Fire is kept alive until the death of the headman. When this happens, his hut is destroyed, and his “holy fire” is left to slowly burn down to only embers. His family will dance all night in mourning.

Only those who are invited are allowed to cross the holy line and sit by the fire to share their stories and laughter with tribal members over food and drinks. Oftentimes, the chief can be found, aglow in the fire’s light, holding communion with tribal ancestors, asking for a blessing and guidance. Each night, before the Himba people retire, an ember from the sacred fire is carried into the chief’s house. In the morning, the chief will use the same ember to reignite the sacred fire which may have been weakened by the night’s wind. 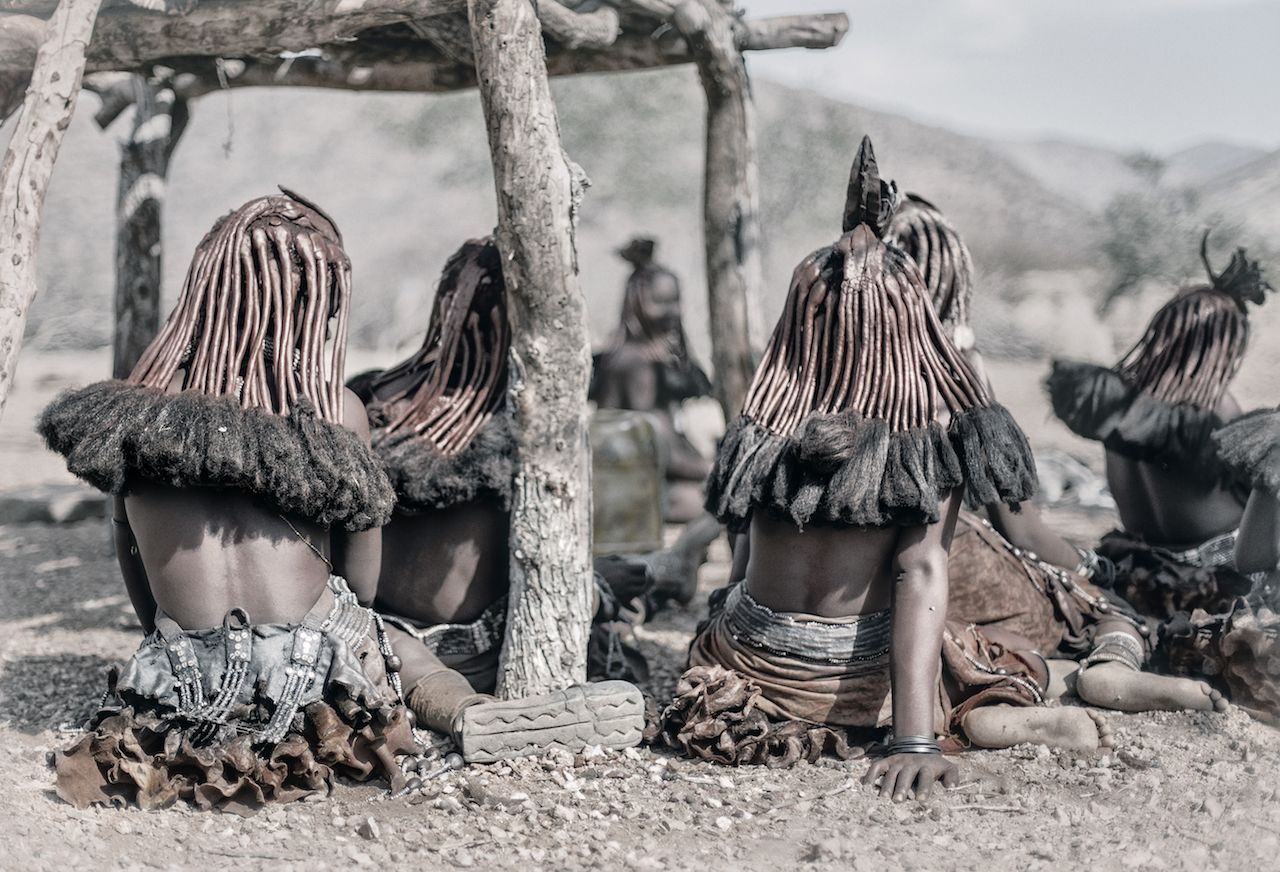 Washing the body with water is not only a luxury, it is considered a waste of water and is strictly prohibited. instead of bathing, women apply otjize paste every morning in a grooming ritual that can take two to three hours. The mixture is scented with aromatic resins, deep orange, symbolizing the earth’s red color — and blood, the essence of life. Otjize is considered to ensure the ideal of Himba beauty. The paste also offers protection from the sun and insect bites. Otjize is made by pounding ochre stone (Hematite) into small pieces. Then the fragments are mixed with butter, slightly heated, and applied to the skin. The paste keeps the skin clean and moist and, to some extent, blocks hair growth on the body. 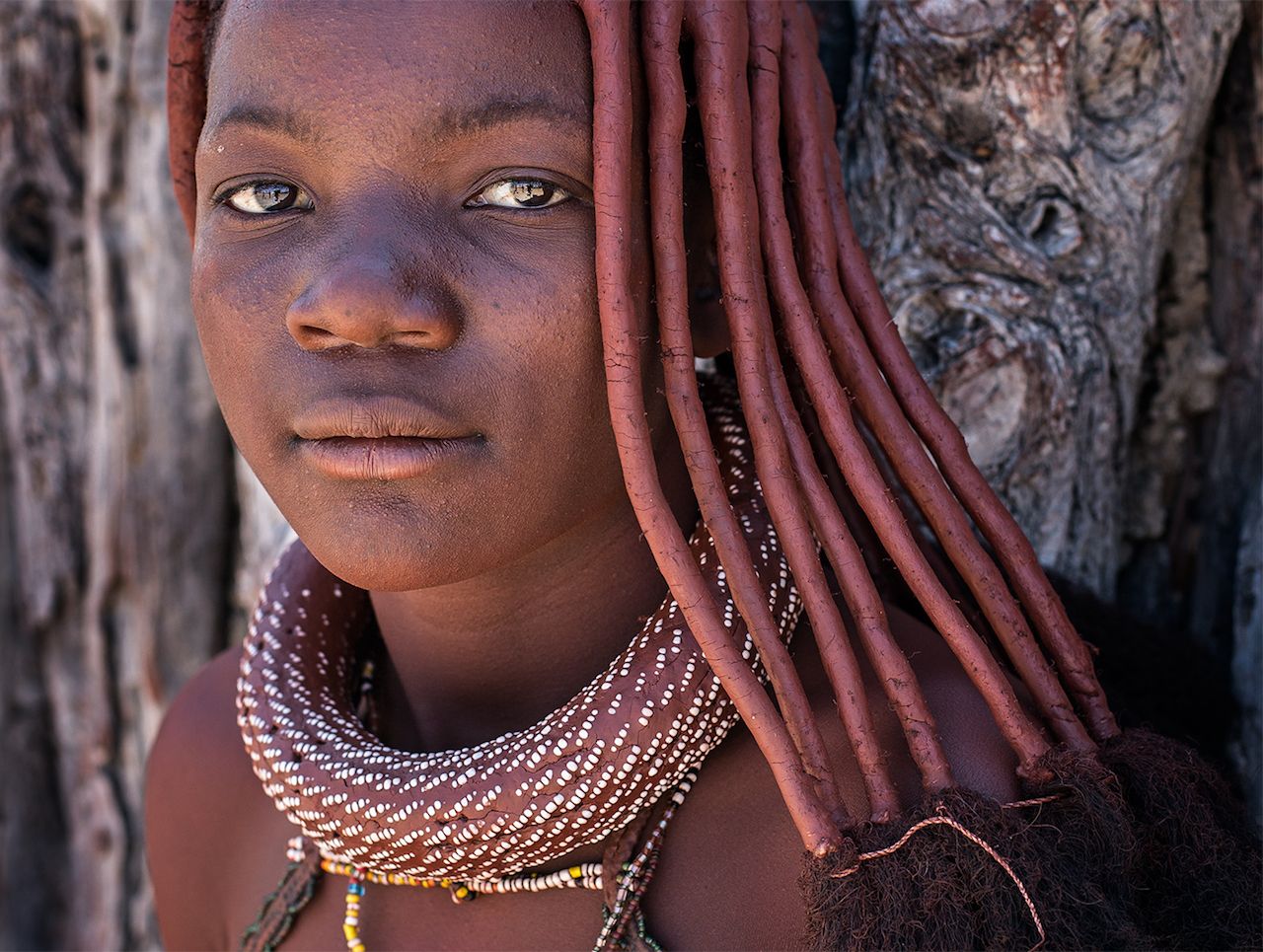 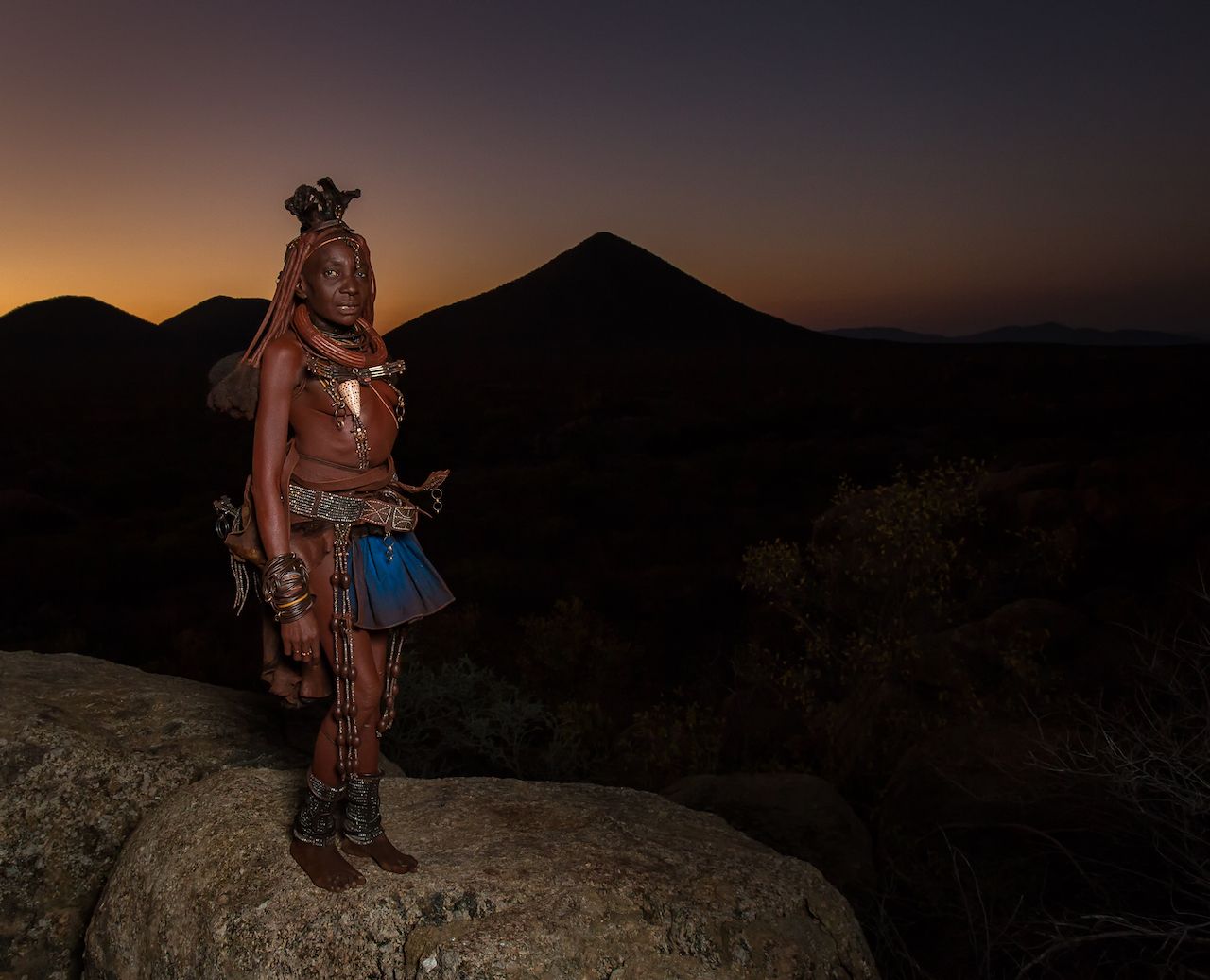 Apart from applying red ochre on their skin, Himba women take a daily smoke bath in order to maintain personal hygiene. They will put some smoldering charcoal into a little bowl of herbs and the wood of the Commiphora tree and wait for the smoke to ascend. Then, they blow over the smoking bowl and start perspiring. For a full body wash, they cover themselves with a blanket so that the smoke gets trapped underneath the fabric. 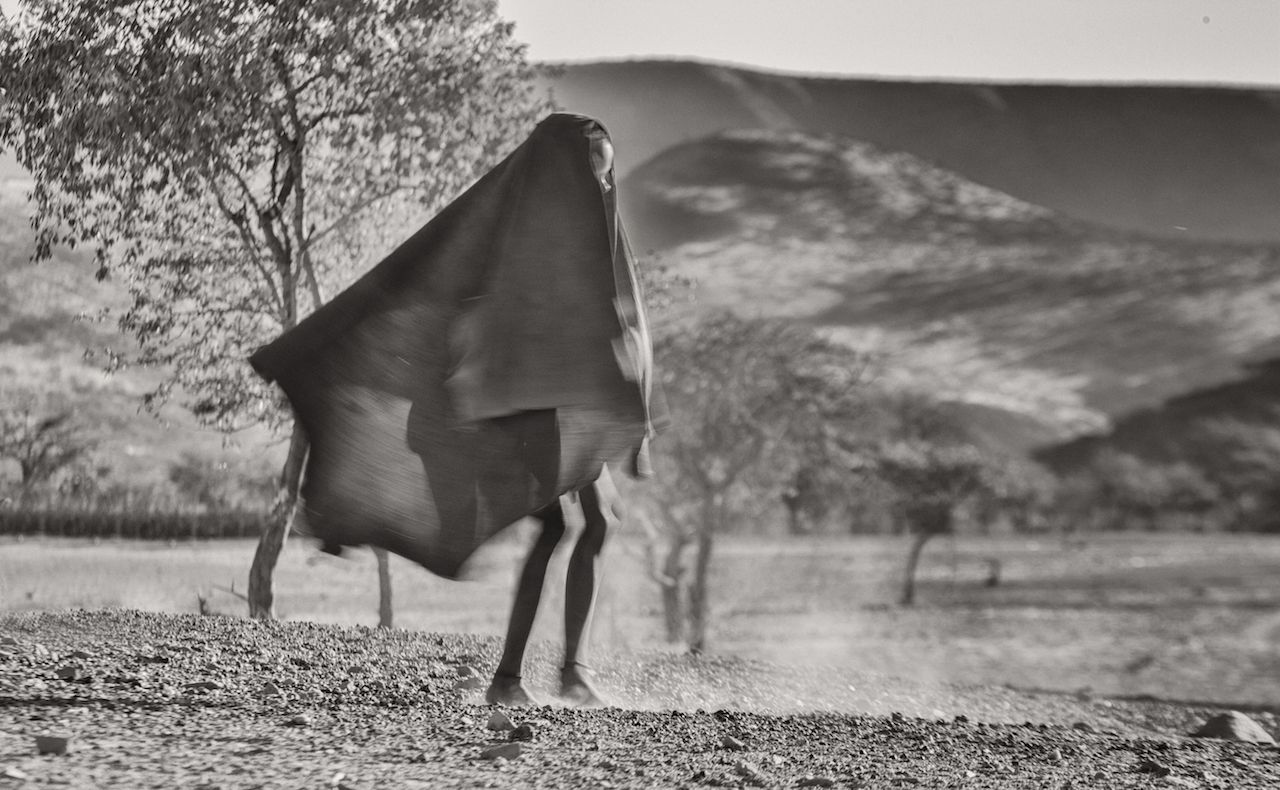 The first beauty task is to take care of their dreadlocks, then women cover themselves completely with otjize. 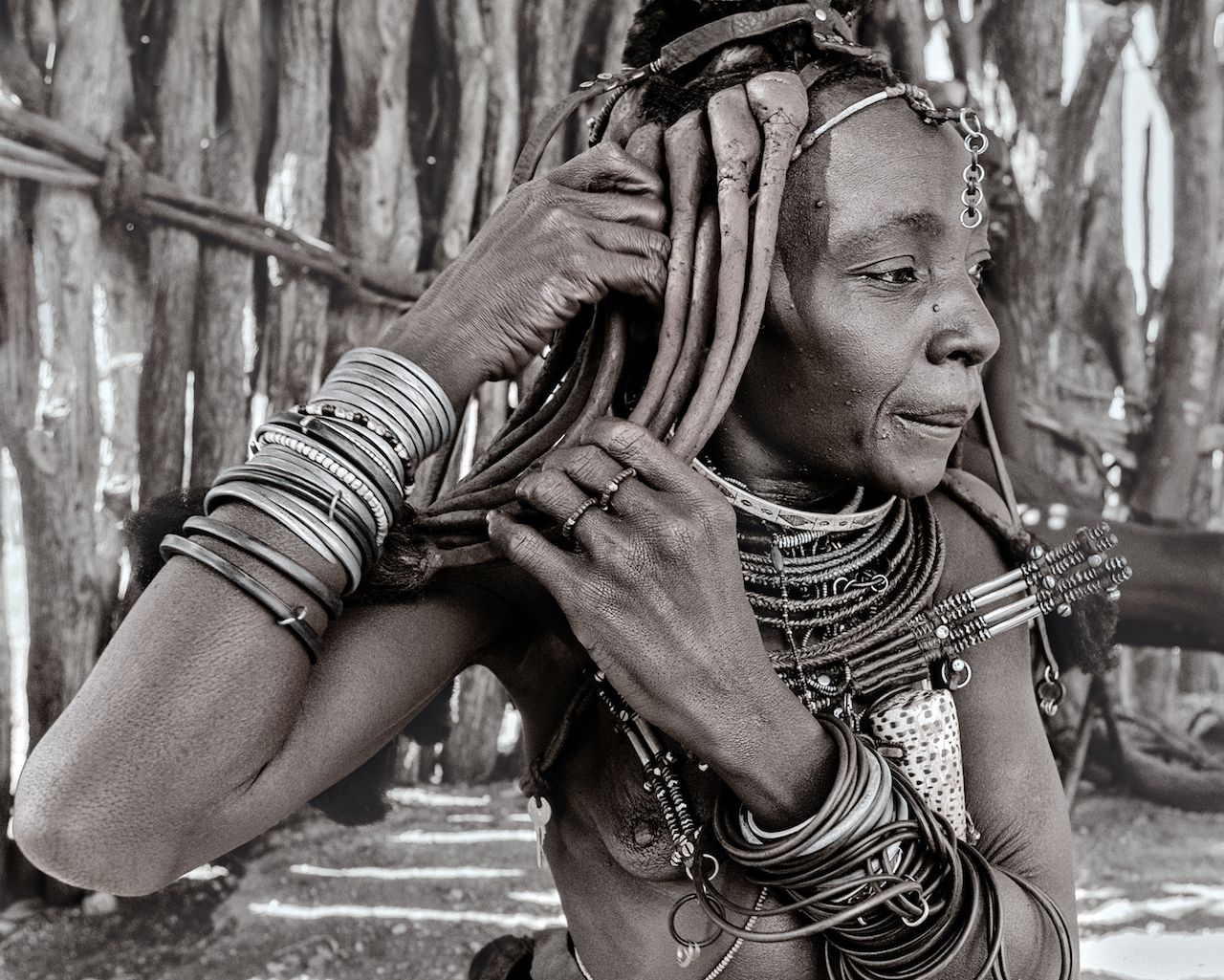 Women dress in goatskin skirts embellished with shells, iron, and copper jewelery, as well as striking, cattle-horn-like headgear, erembe, which their relatives, the Herero also wear. The erembe crown is made of cow or goat leather and is placed on the girl’s head after she’s married for a year or has a child. Women wear a large white shell necklace called the ohumba, which is passed from mother to daughter. Equally popular, particularly among married women, are heavy necklaces made from copper or iron wire, often made from electric fencing; some women wear keys and bullets as decoration. The adult Himba women all have beaded anklets called omohanga, where they hide their money; the anklets also serve as a protection against venomous animal bites. 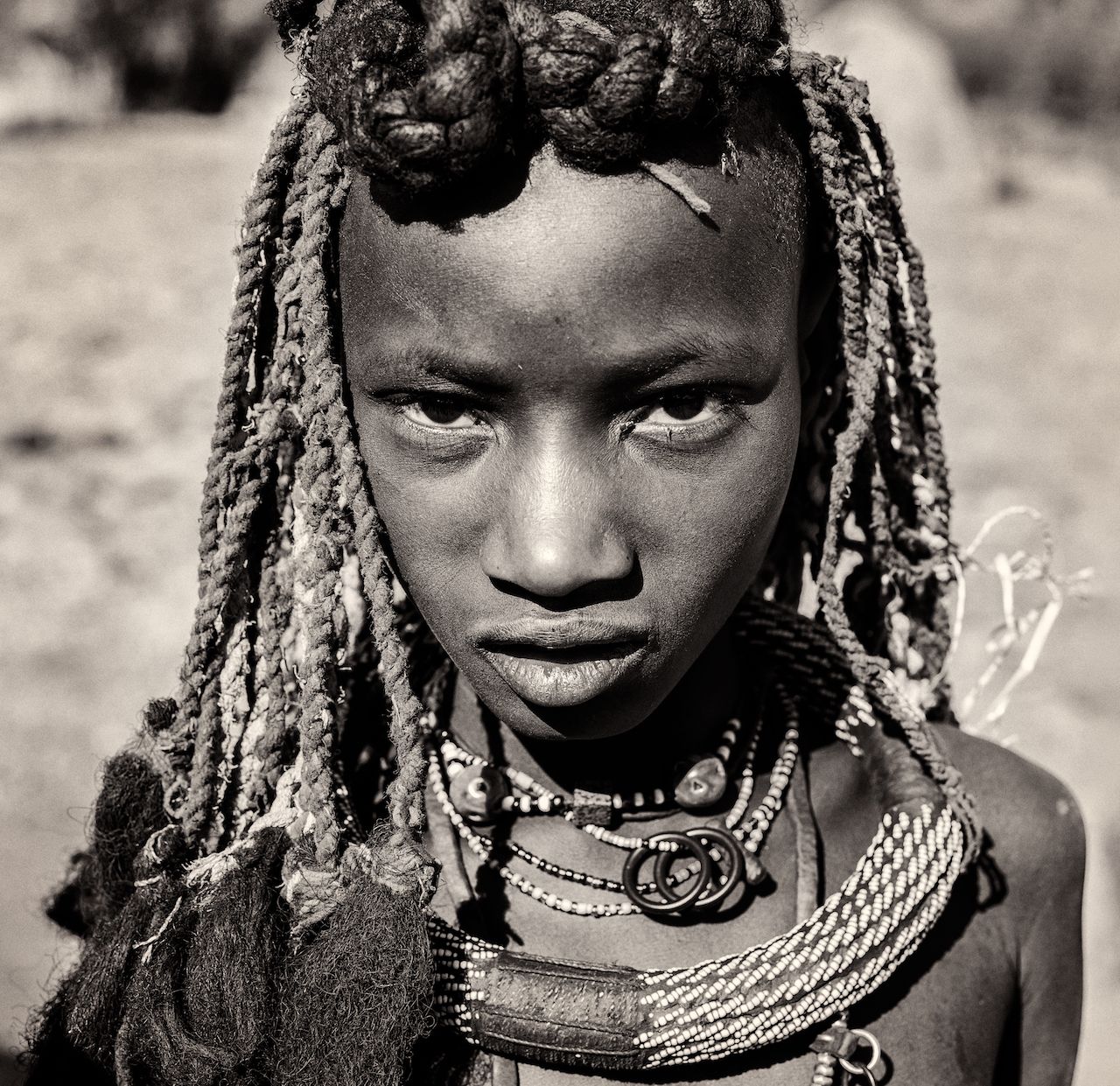 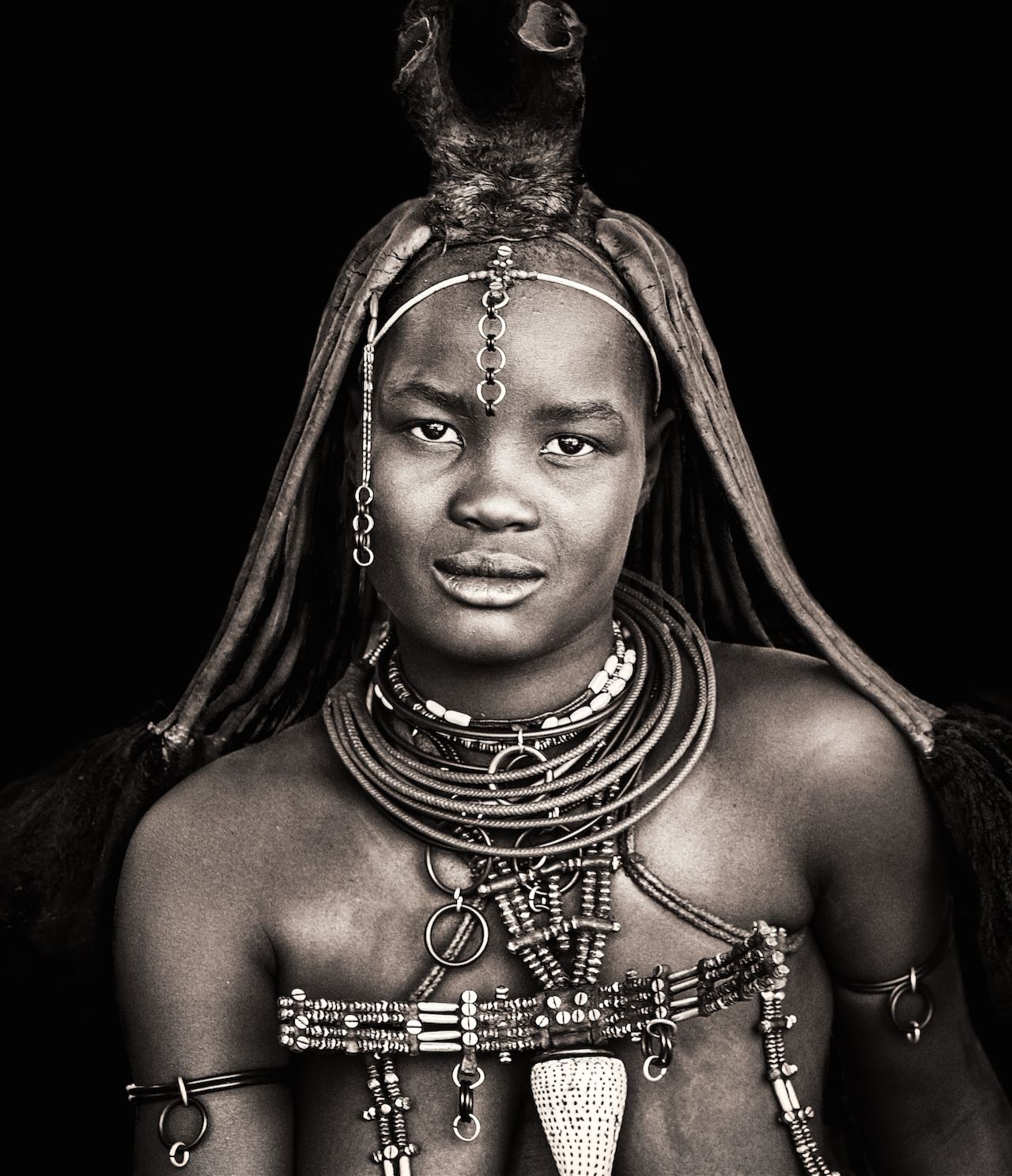 From the time a Himba girl is born, her hairstyle will identify her place in society, indicating age, clan and marital status of a woman. The hair is first lengthened with straw then woven together with hair extensions to create dreadlocks, which are then covered in otjize and finished with goat hair, added to give the distinctive pom-pom look. 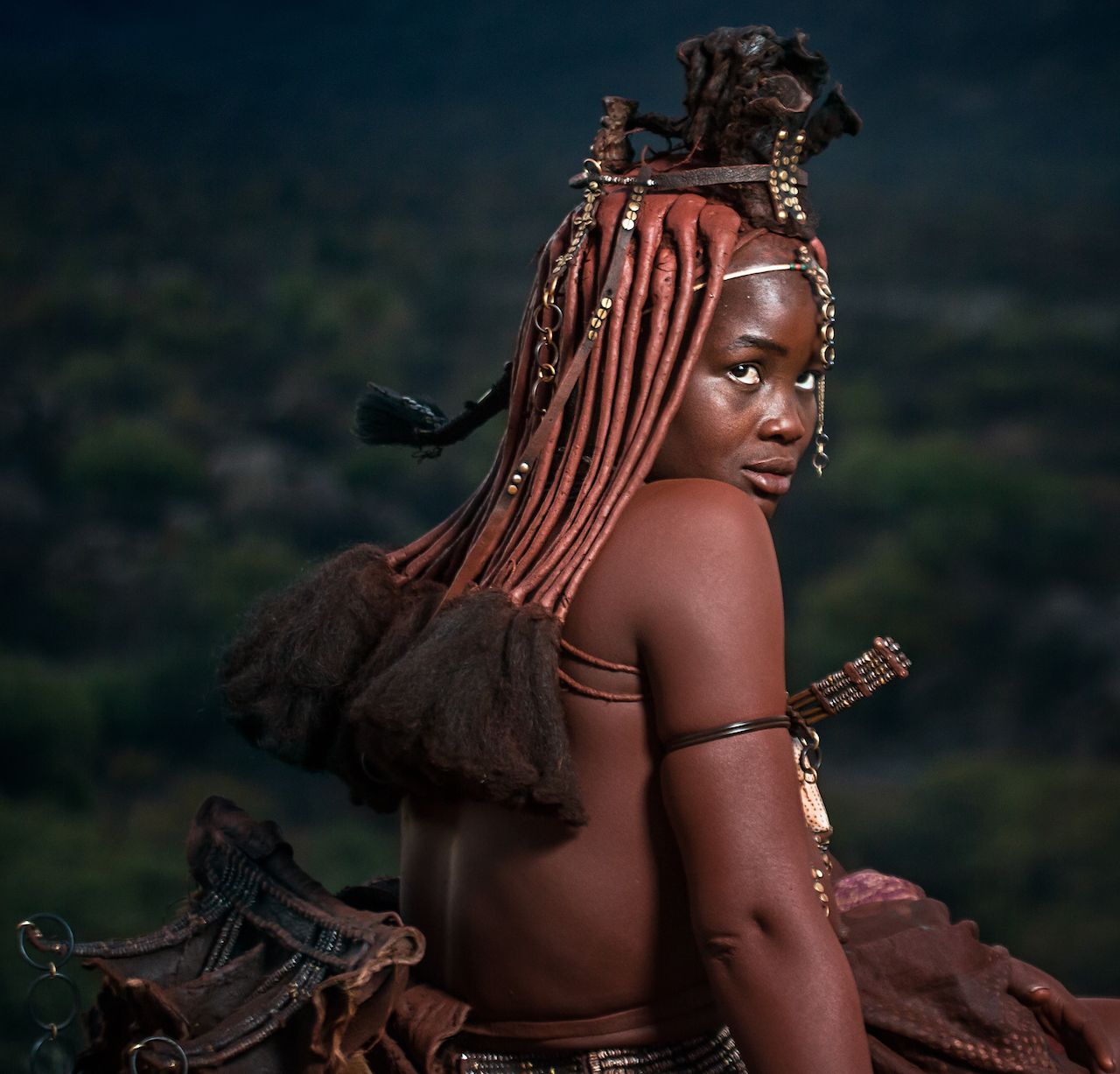 A young girl typically has two plaits of braided hair (ozondato), the form of which is decided by the clan (oruzo) from which she is descended on her father’s side. A young girl who hasn’t reached puberty yet will display two braids at the front of her head, if a girl is a twin, she will wear only one single braid, indicating she is only one-half of a pair of twins. 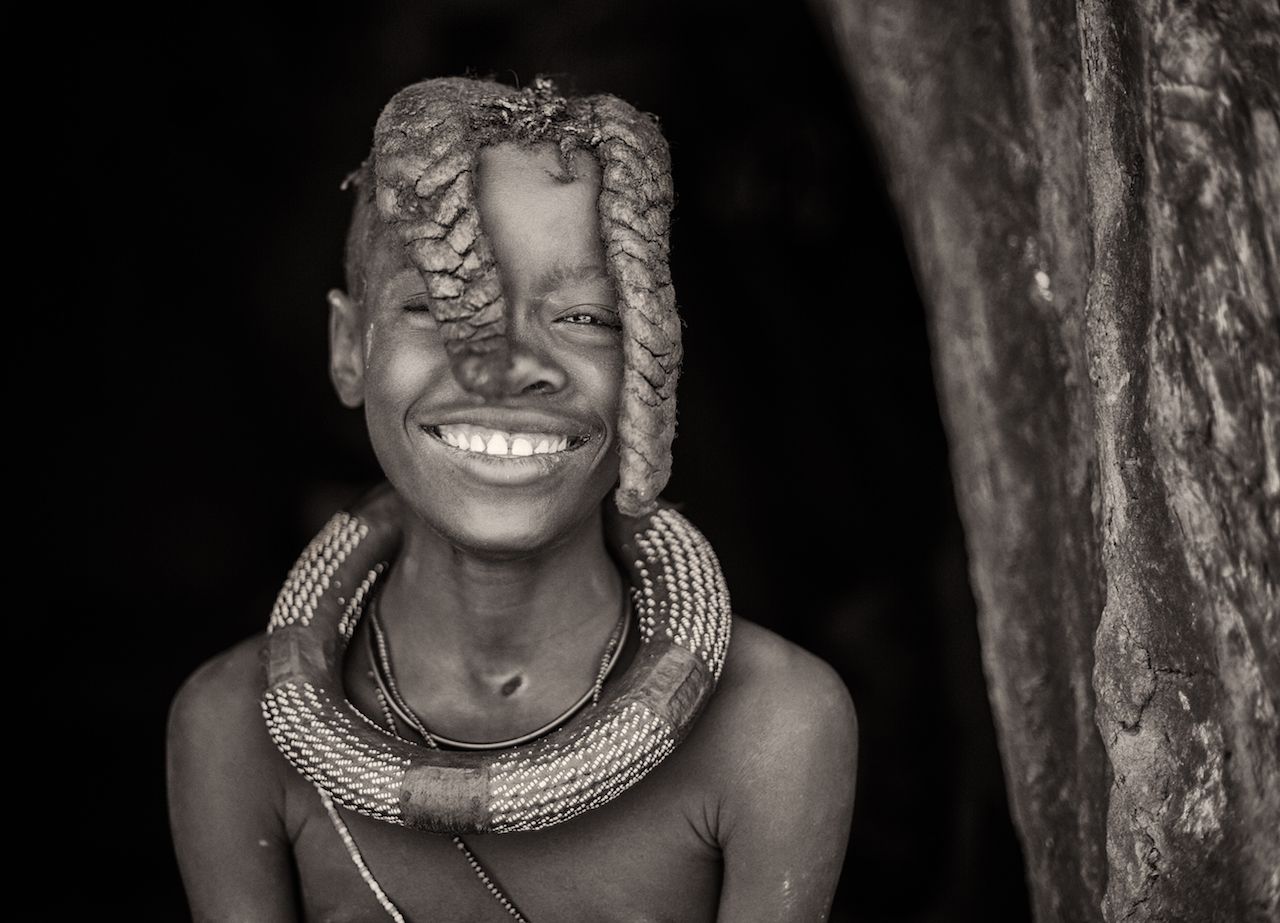 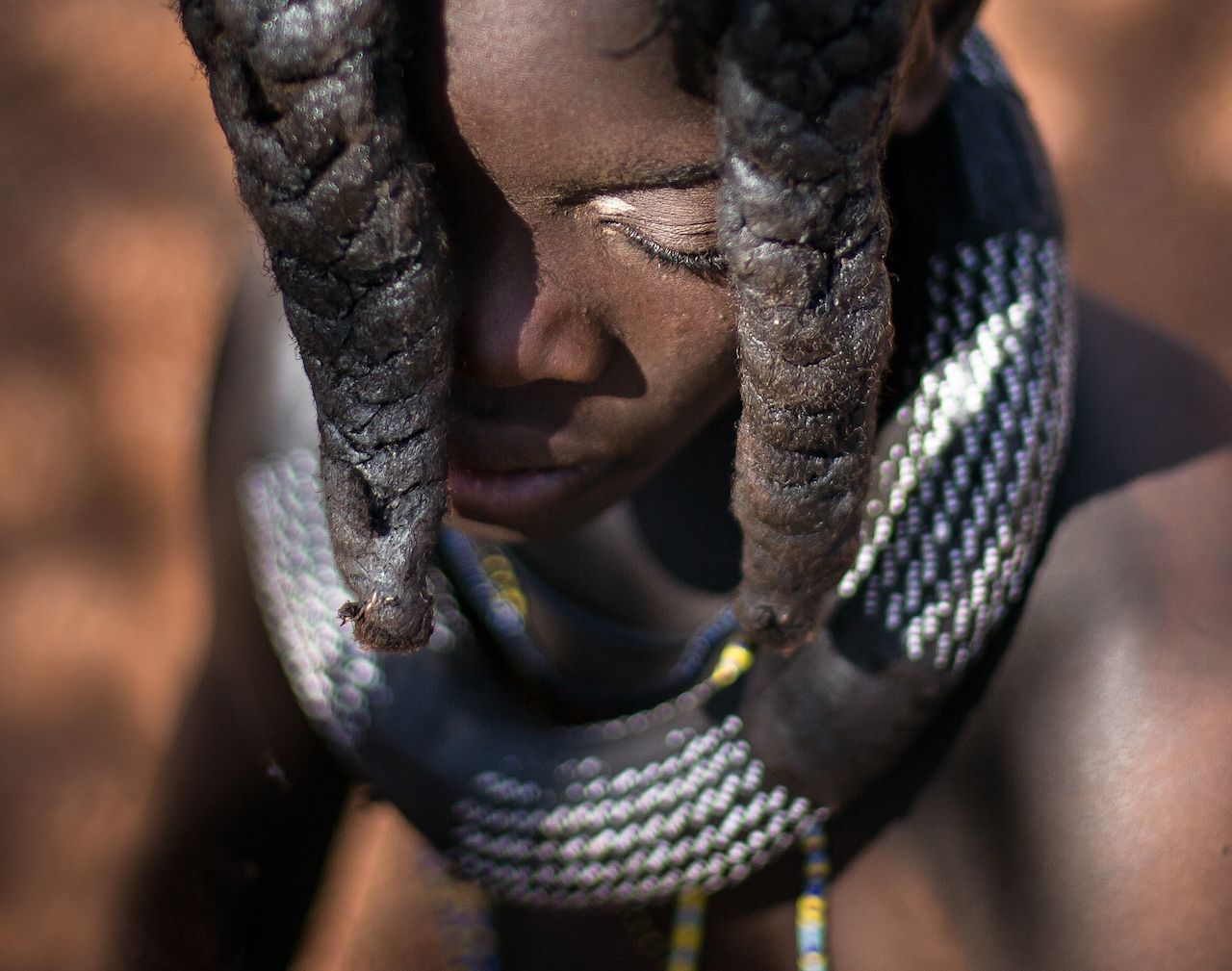 At puberty, the girl will wear braids up front covering her face, letting males know that she isn’t ready to marry. When a young woman is ready to marry, the same locks will be braided toward the back of the head, allowing potential suitors to see her face. When a woman has been married for a year or has had a child, she will wear the erembe headdress on top of her head.

Men, on the other hand, have very simple coifs. Single men wear an ondatu plait on the back of their head, married men cover their hair with turbans for the rest of their lives, only shaving their hair and removing their turbans during funerals.

The smallest children tend to have shaved heads, although some might have special haircuts to indicate their clan. New-born babies are adorned with bead necklaces, bangles made of beaten copper — shells are added when the children are a little older. 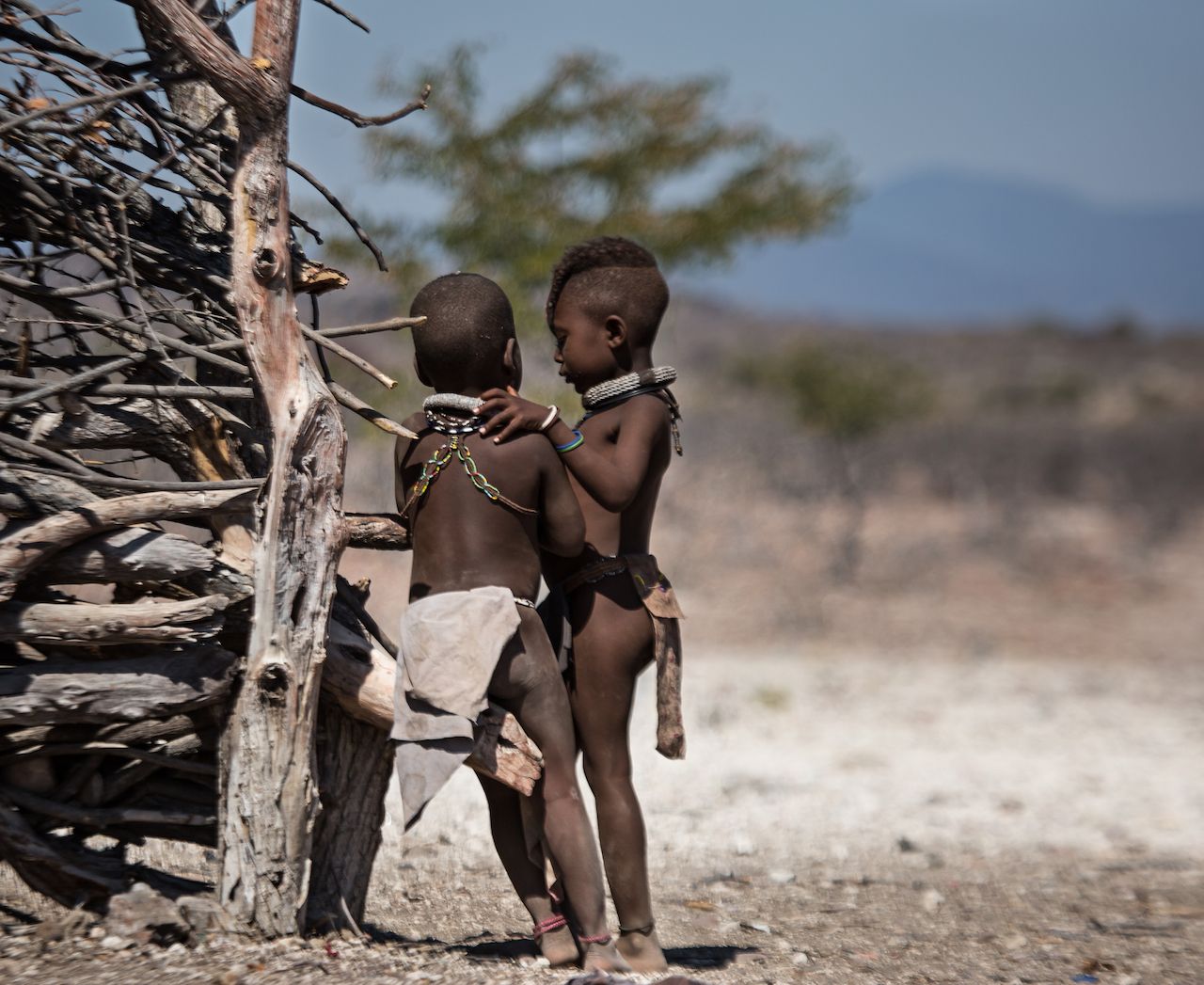 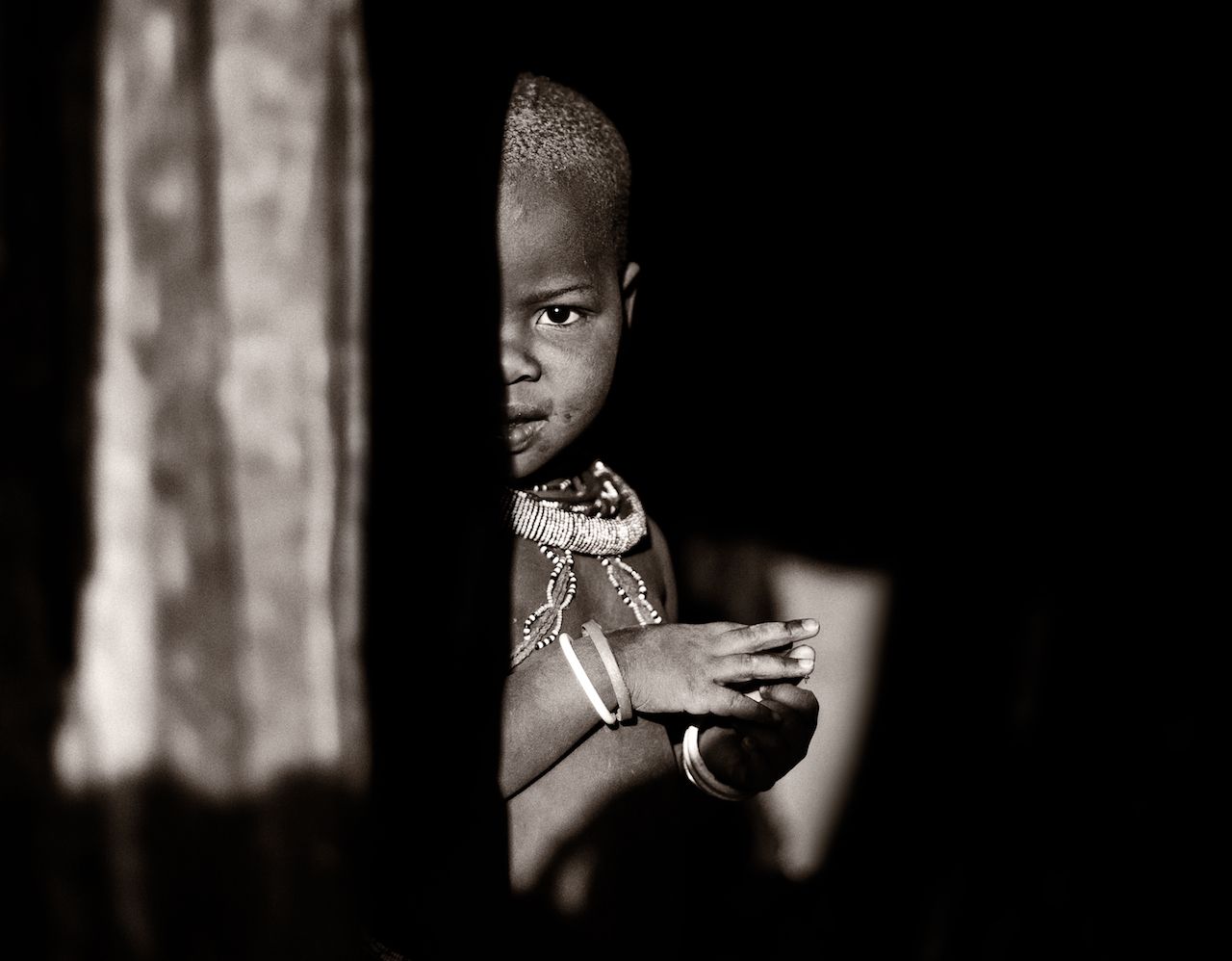 Galleries25 Photos From Namibia We Can’t Stop Looking At
What did you think of this story?
Meh
Good
Awesome
✖
travelstoke
Download the mobile app
stoked by