Europe is filled with architectural masterpieces, from churches and synagogues to subway stations and train stations. It’s also home to some of the oldest and most beautiful clock towers in the world — ones far more intricate than the famous Big Ben. These design and mechanical wonders may not be understood by all, but they are worth admiring — even if your Apple Watch has you covered on keeping time. Here are seven of the coolest clock towers you can find around Europe and the stories behind their creation. 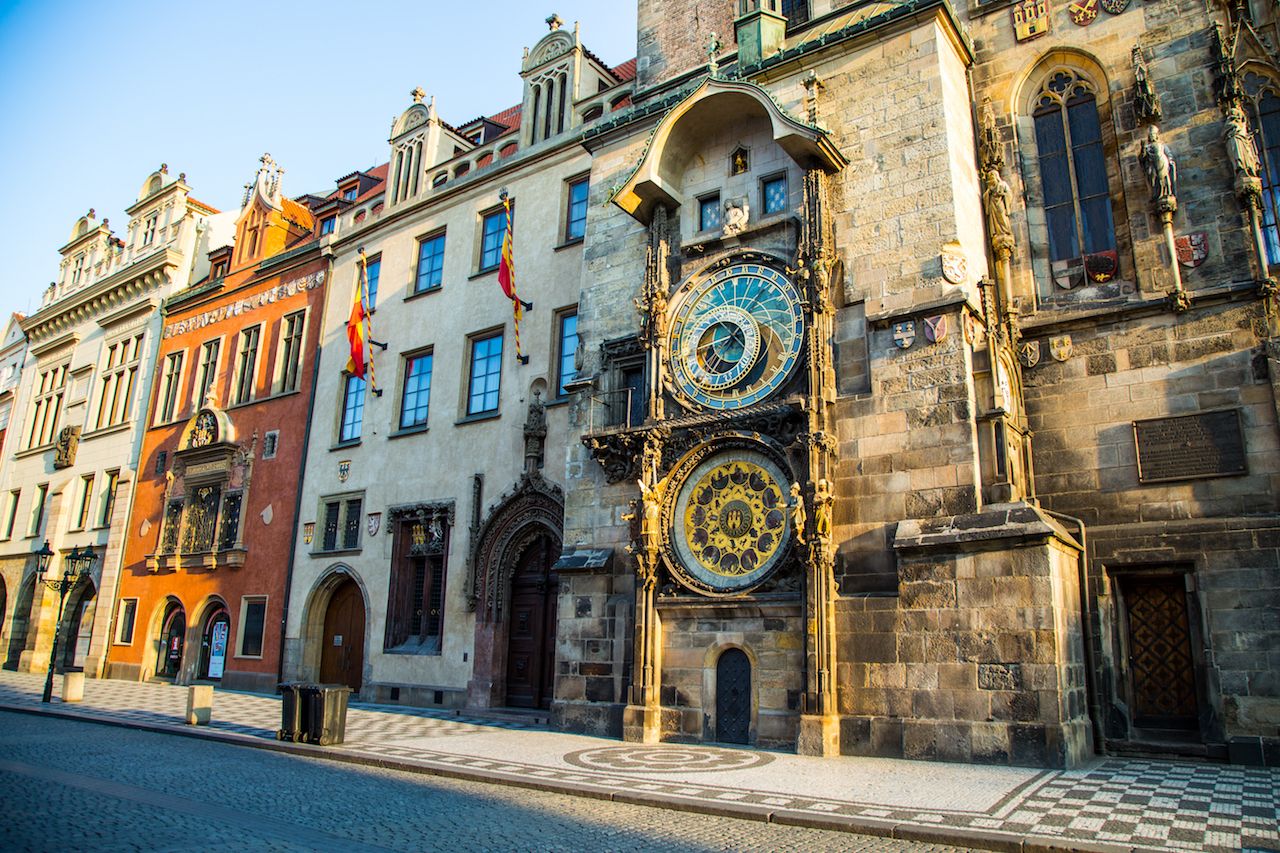 Prague’s Astronomical Clock (or Pražský orloj) is a work of genius. The two dials of the clock mounted on the medieval Old Town Hall tower are as beautiful as they are intricate. Glimpsing the clock won’t help you figure out what time it is if you have not done some major research beforehand, so here’s the lowdown on how it works. 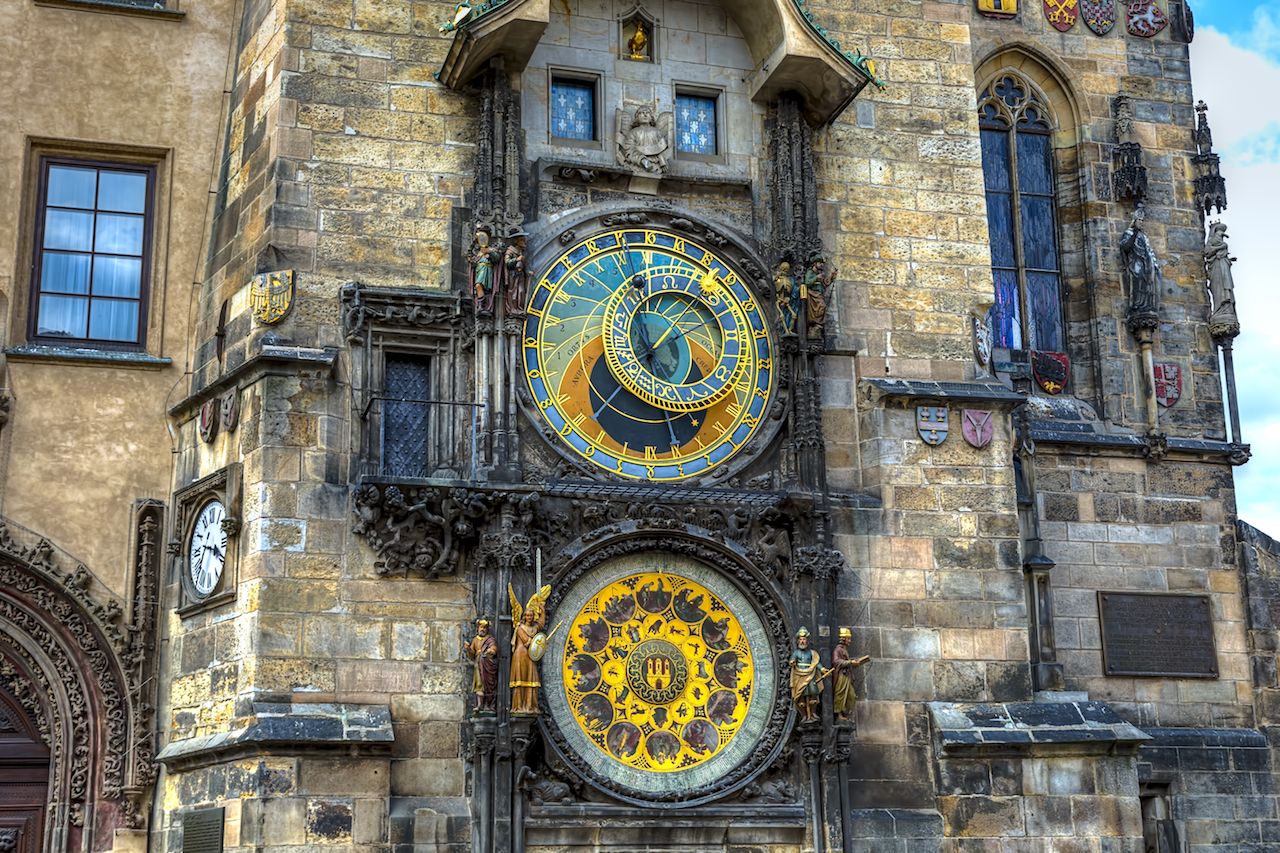 The upper dial is the clock that provides the time of the day, and it does so in three ways: Central European time (the one we all care about), Old Bohemian time, and Star time. This dial’s many circles, hands, symbols, and colors also provide knowledgeable observers with a ton of information, such as the position of the sun, moon, and stars. Every hour, from 9:00 AM to 11:00 PM, the blue doors above this dial open, and figurines of the 12 apostles move within the tower to show themselves at the doors one by one. The figures on both sides of the dial also move every hour. This mechanism has been working the same way for over 600 years. (It was built in 1410.) Note that the apostles’ parade is more easily seen from within the tower’s chapel. Once inside, climb to the top for one of the greatest views of the city. The entry fee is 250 CZK ($11).

The lower dial is a calendar; it notes the day of the week, the month, and the year. This dial was added to the tower in 1659.

Because it’s been doing its job so well and for so long, the clock is currently undergoing repairs to keep it ticking. According to the New York Times, some of the metal gears will be replaced by more authentic wooden ones, and the clock’s dials will be restored to their original beauty. The clock will be back in place in August.

2. The Jubilee Clock in Lier, Belgium 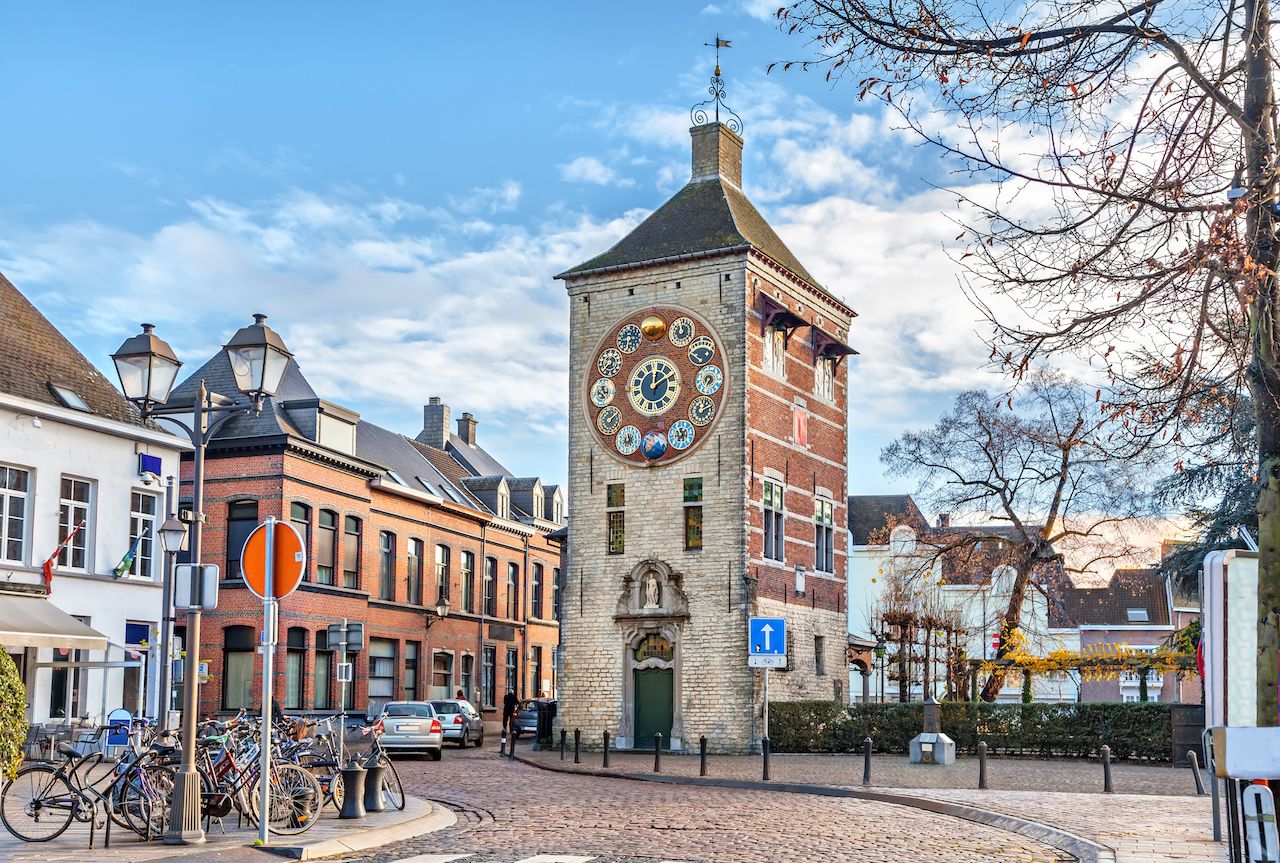 Mounted on the 14th-century Zimmer Tower (all that is left of the city wall), the 13 dials of the Jubilee clock may be confusing, but at least you can easily check out the time of the day — on the middle dial. Louis Zimmer, the clockmaker and astronomer, spent five years creating the Jubilee Clock and revealed it to the public in 1930 for the 100th anniversary of Belgium’s independence, hence the clock’s and tower’s monikers. 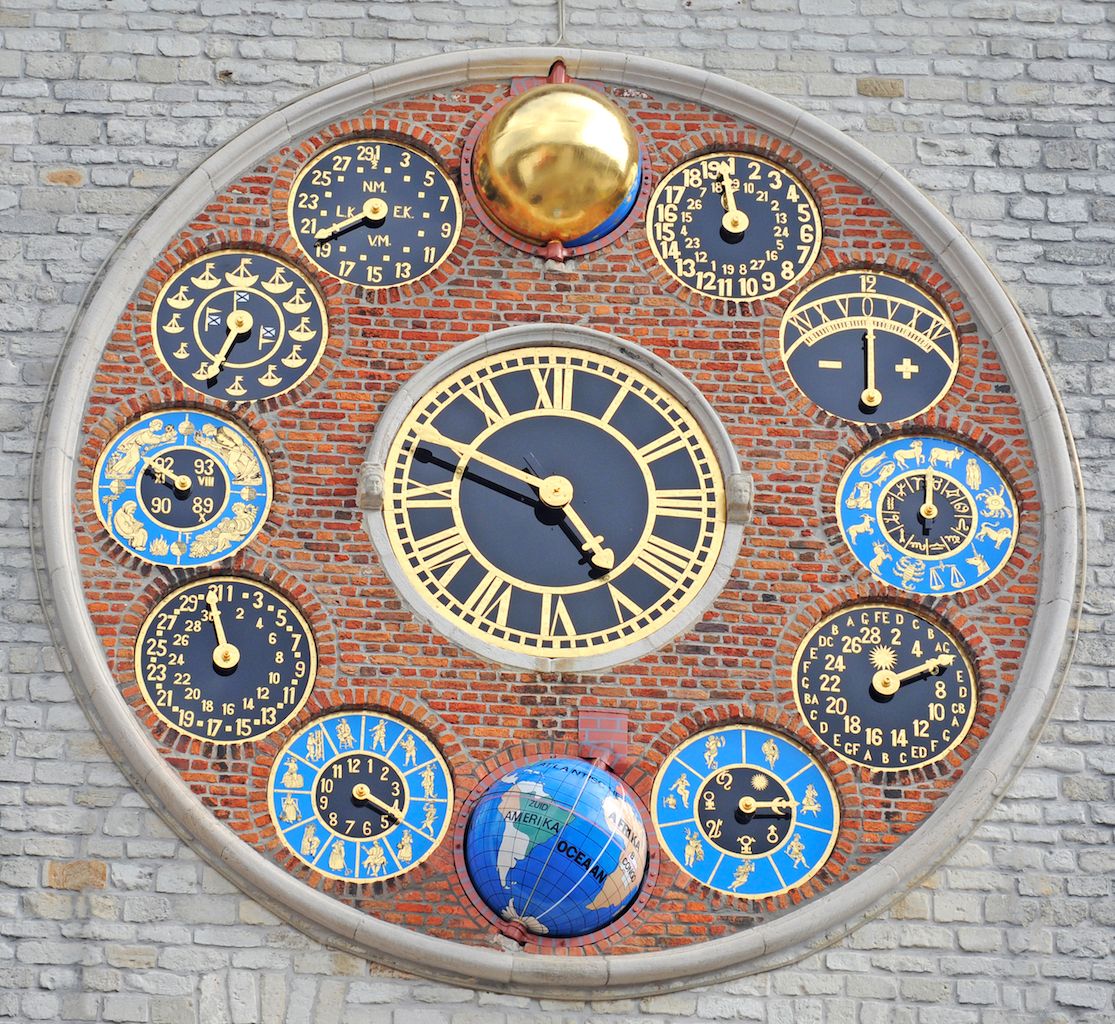 Every day at noon, on the right facade of the Zimmer Tower, four automated figures depicting the four stages of life (child, youth, adult, and old man) ring the bells to announce the time.

3. The clock of the Church of Our Lady in Nuremberg, Germany 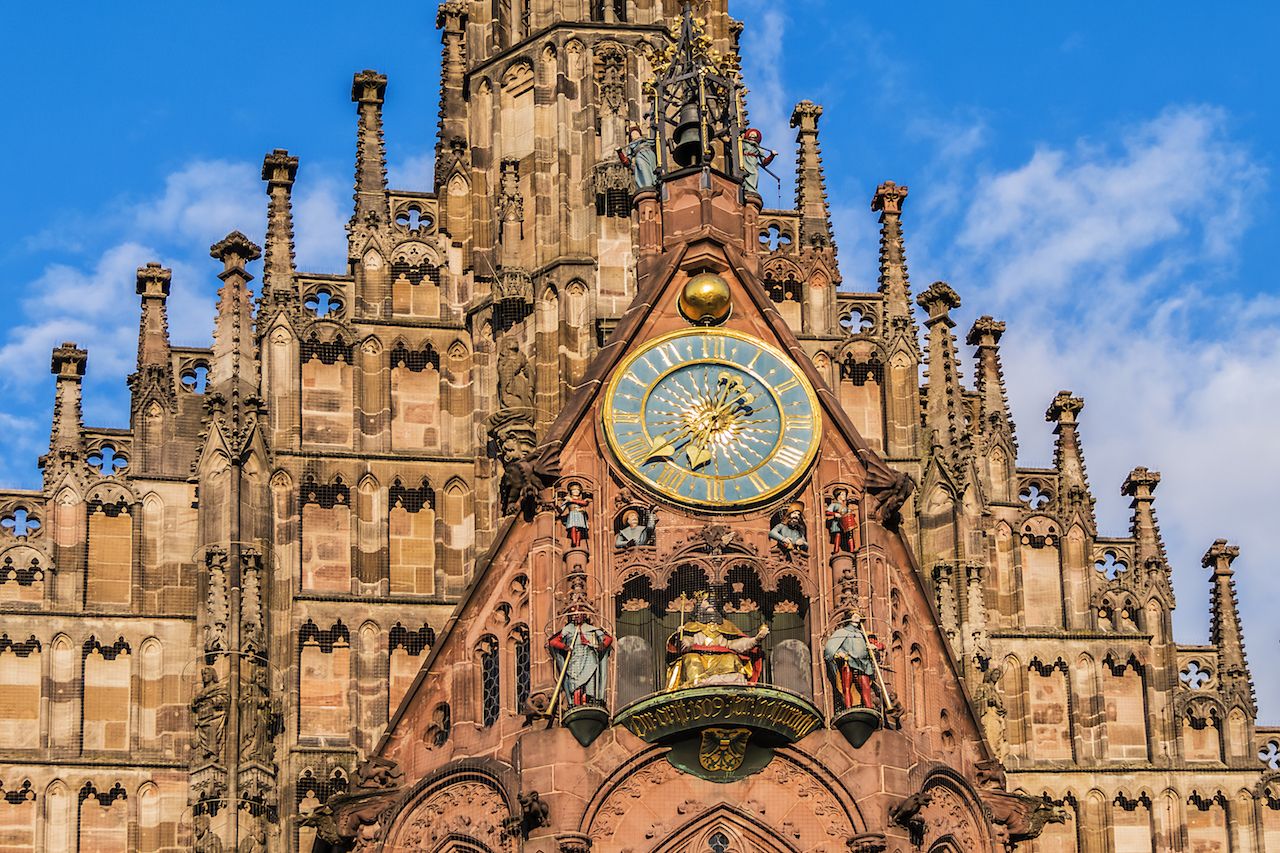 The clock of the Church of Our Lady (Frauenkirche) only has one dial, and it displays the time of the day, so, unlike the previous two clocks, you won’t need a degree in astronomy to decipher it. The clock is nothing to rave about, but the beautiful mechanism of figurines that are linked to it and the church on which it sits is quite amazing.

The spot where this Gothic church dedicated to Mary now stands used to be the location of a synagogue that was destroyed during the Jewish pogrom of 1349. Frauenkirche was finished in 1355 and designed to be a holy shrine for the Crown Jewel of Emperor Charles IV. Despite its age and the bombing raid of 1945, the church still stands proudly on Nuremberg’s marketplace. The automated figures that move at noon every day represent seven nobles showing reverence to Emperor Charles IV sitting on his throne. It was created in 1509 and stored away in a bunker during WWII.

The Church of Our Lady is open seven days a week. There is no entry fee but donations are accepted. Guided tours are available.

4. The clock of La Conciergerie in Paris, France 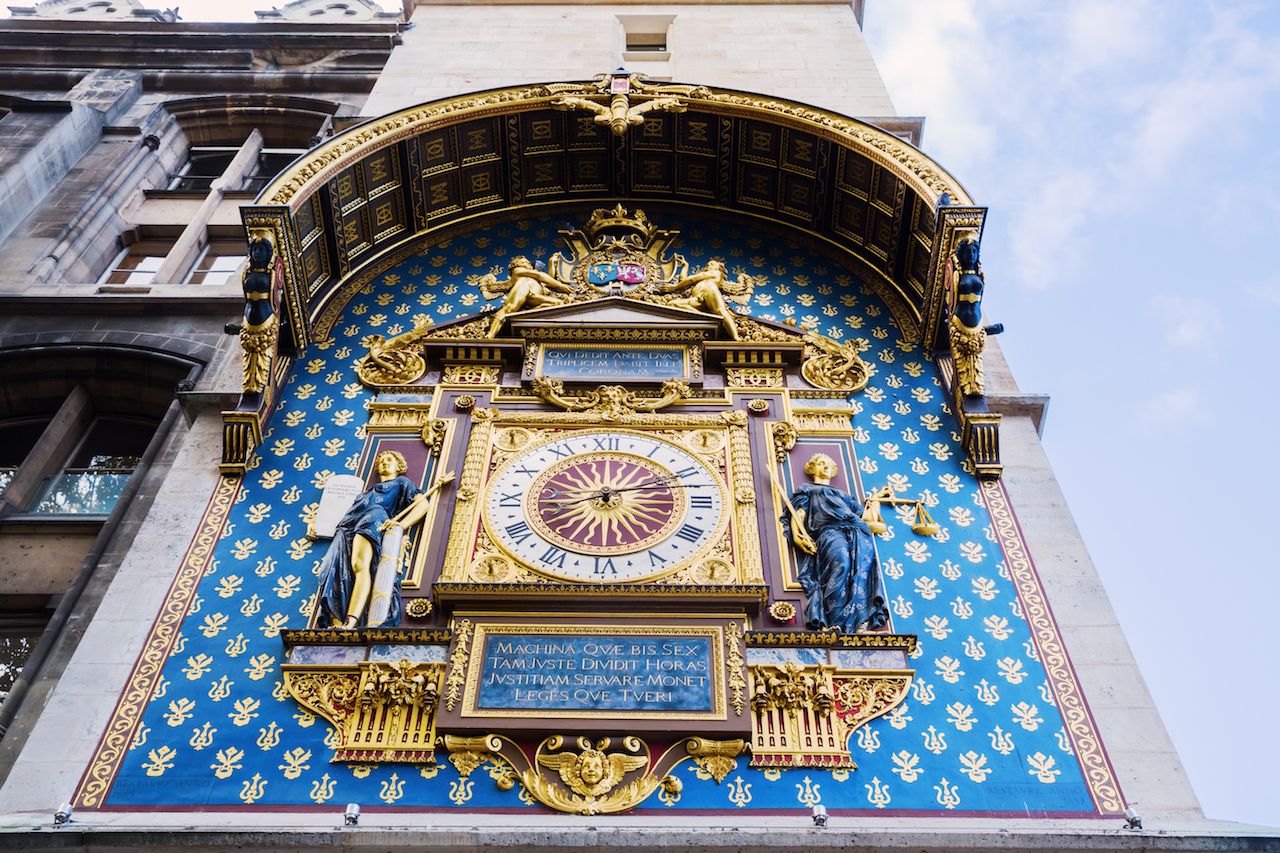 The oldest public clock in Paris is mounted on the city’s courthouse, La Conciergerie. The Gothic palace that is the current courthouse used to be the royal residence of the French kings until the 14th century when it became a law court/prison. (It was where Marie-Antoinette was jailed during the French Revolution.) The clock was commissioned in 1371, but it was reworked in 1586 — the sculptures representing Justice and Law were added then — and the face of the clock was restored many times over the years. (The latest renovation took place in 2012.) The clock is quite a sight; it is gilded with 24-carat gold, and its bright blue and fleur-de-lis background is a showstopper. 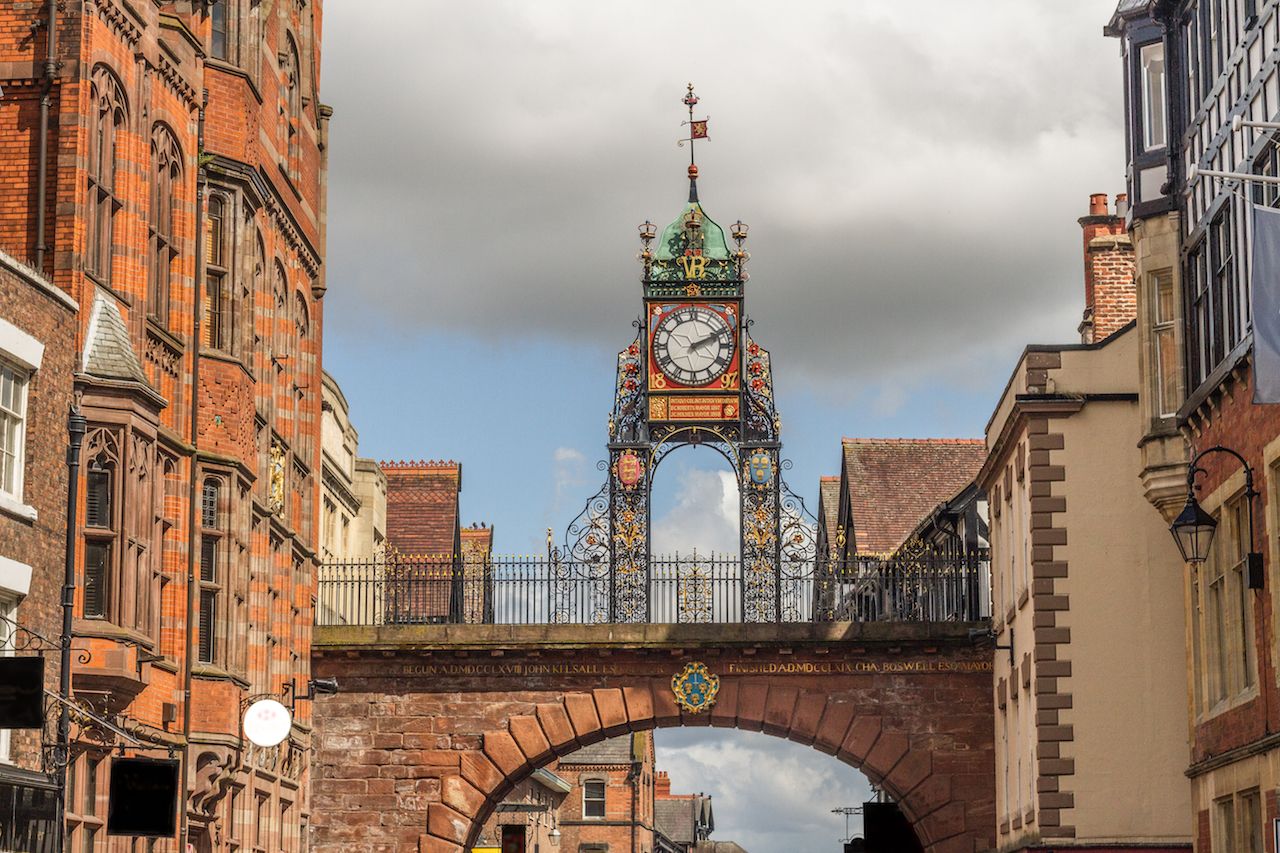 The most famous clock in England is undoubtedly Big Ben, but because it’s currently undergoing repair to the great displeasure of visitors to the country, we suggest you get out of London and check out the Eastgate Clock in Chester. Chester is located about 40 minutes south of Liverpool, and it’s one of Great Britain’s greatest heritage cities, so the clock is only icing on the cake, really.

Chester is an ancient fortified Roman city. The archway (Eastgate) on which the clock sits is part of the remaining two miles of the 2,000-year-old Roman walls, and it straddles Chester’s main shopping street. The Eastgate Clock, mounted on a beautiful column of intricately ornamented wrought iron, was installed in 1899 and began ticking on May 24. It was created to commemorate Queen Victoria’s diamond jubilee (1897). It is said that the Eastgate Clock is the second-most photographed clock after Big Ben. 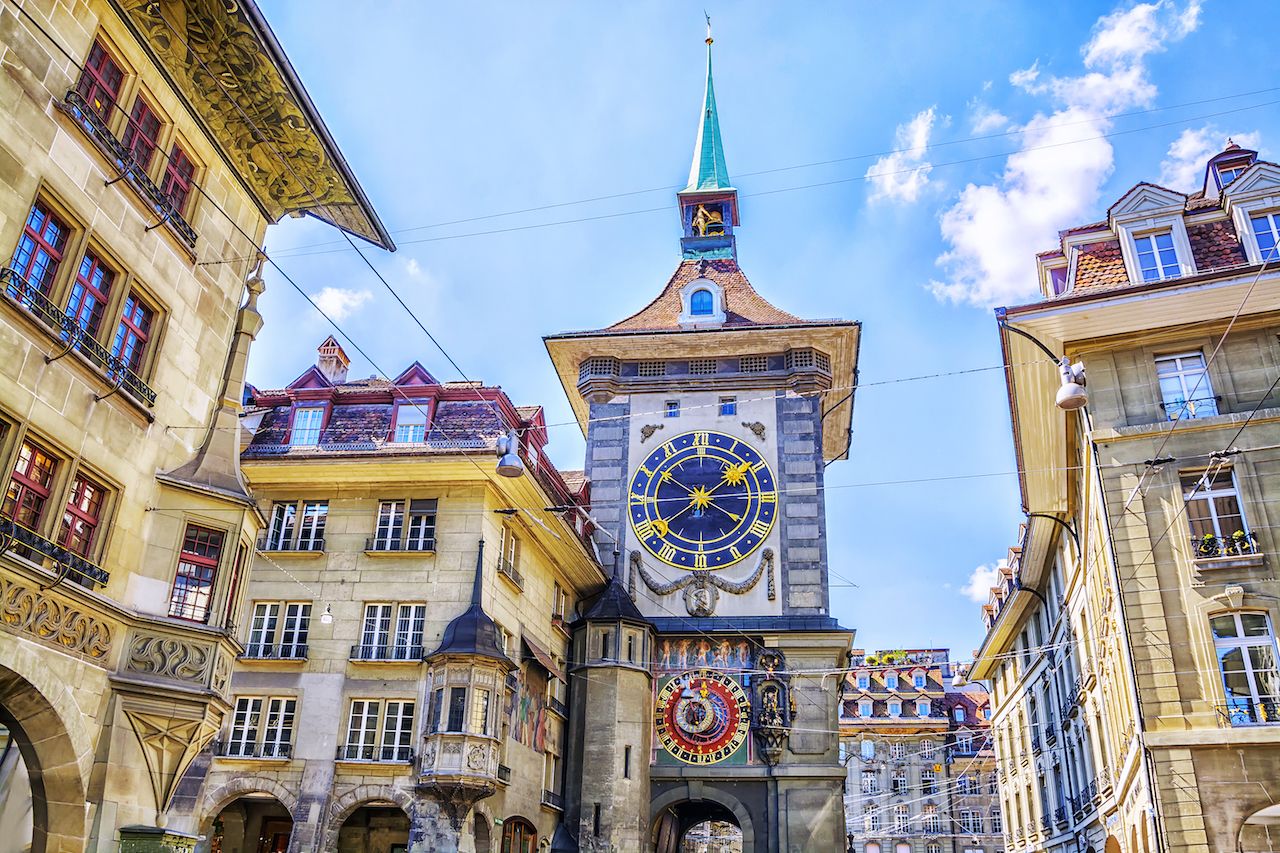 Bern’s Clock Tower was the city’s first western city gate (built between 1191-1256) in the fortified town, but the astronomical clock and its automated figurines were added to the Zytglogge much later in 1530.

There are three clock faces on the tower: 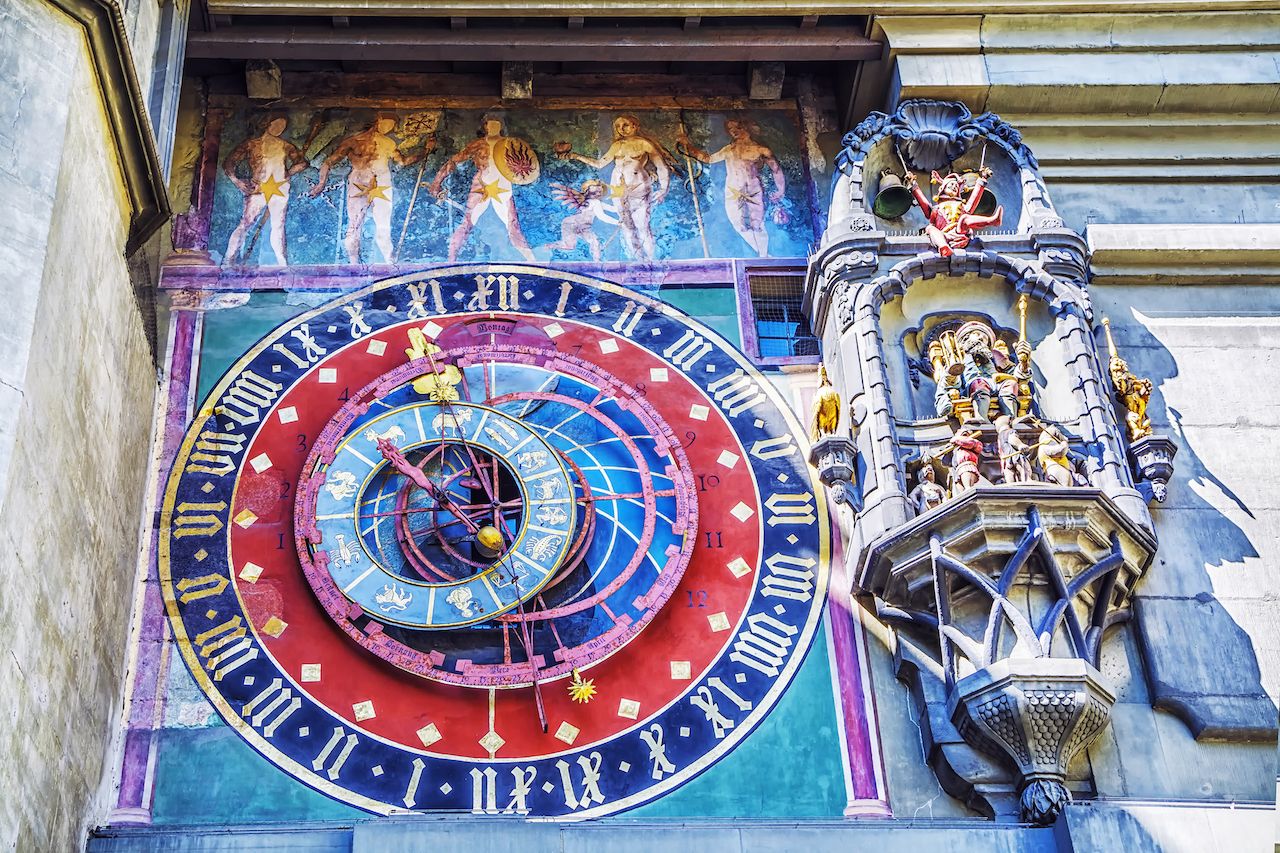 Every hour, a performance involving automated figures is set in motion by the astronomical clock. A dancing jester rings two bells and cues a parade of bears, Chronos turns over an hourglass and opens his mouth, and a gilded rooster raises its wings and crows to start the show.

After you’ve checked out the tower and its clocks from the streets, you can go inside to see the complicated mechanism up close and get a great view of the city’s rooftops. Both public and private tours are organized daily.

7. The Zodiacal Clock of Padua, Italy 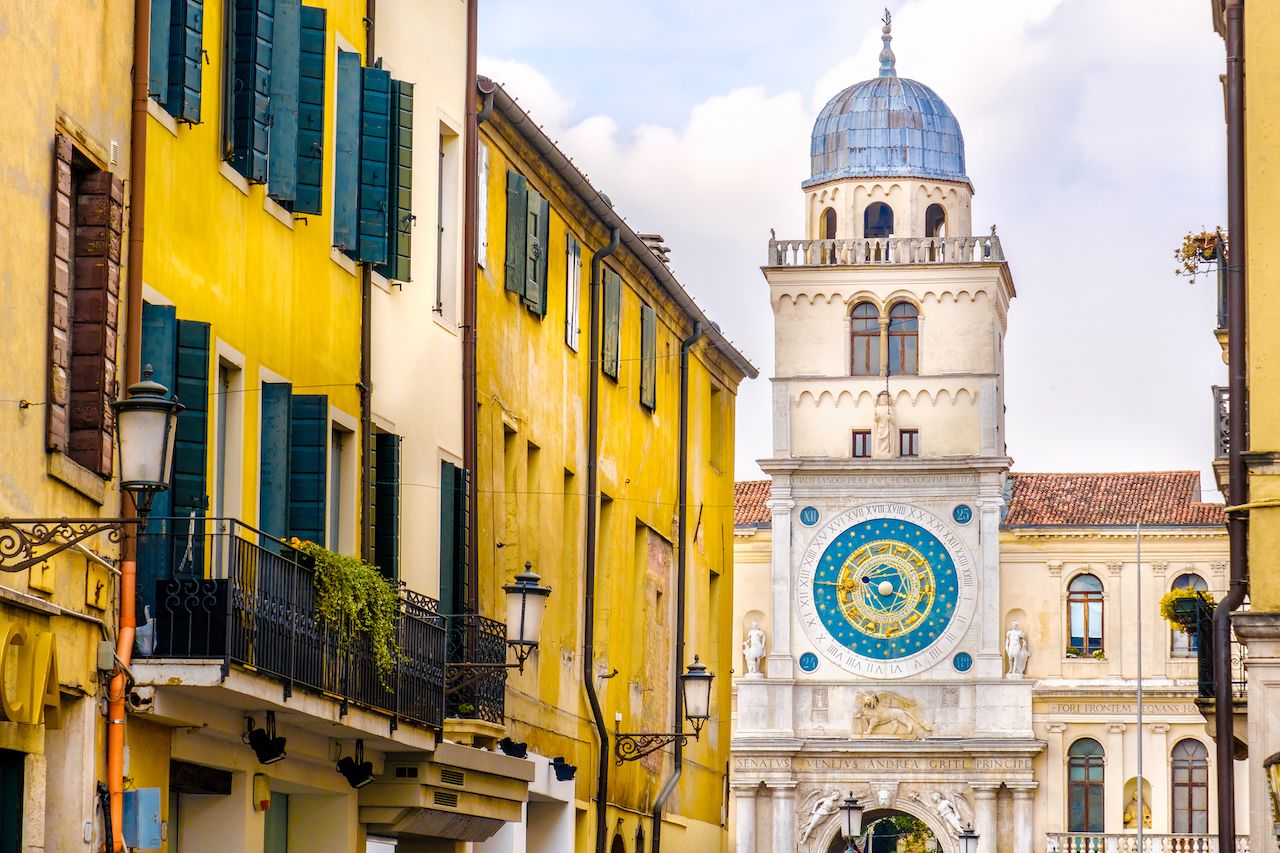 The Zodiacal Clock of Padua, built in 1364, is deemed one of the first clocks ever created. The clock is mounted on the tower of the Palazzo Capitanio and overlooks the beautiful Piazza dei Signori. 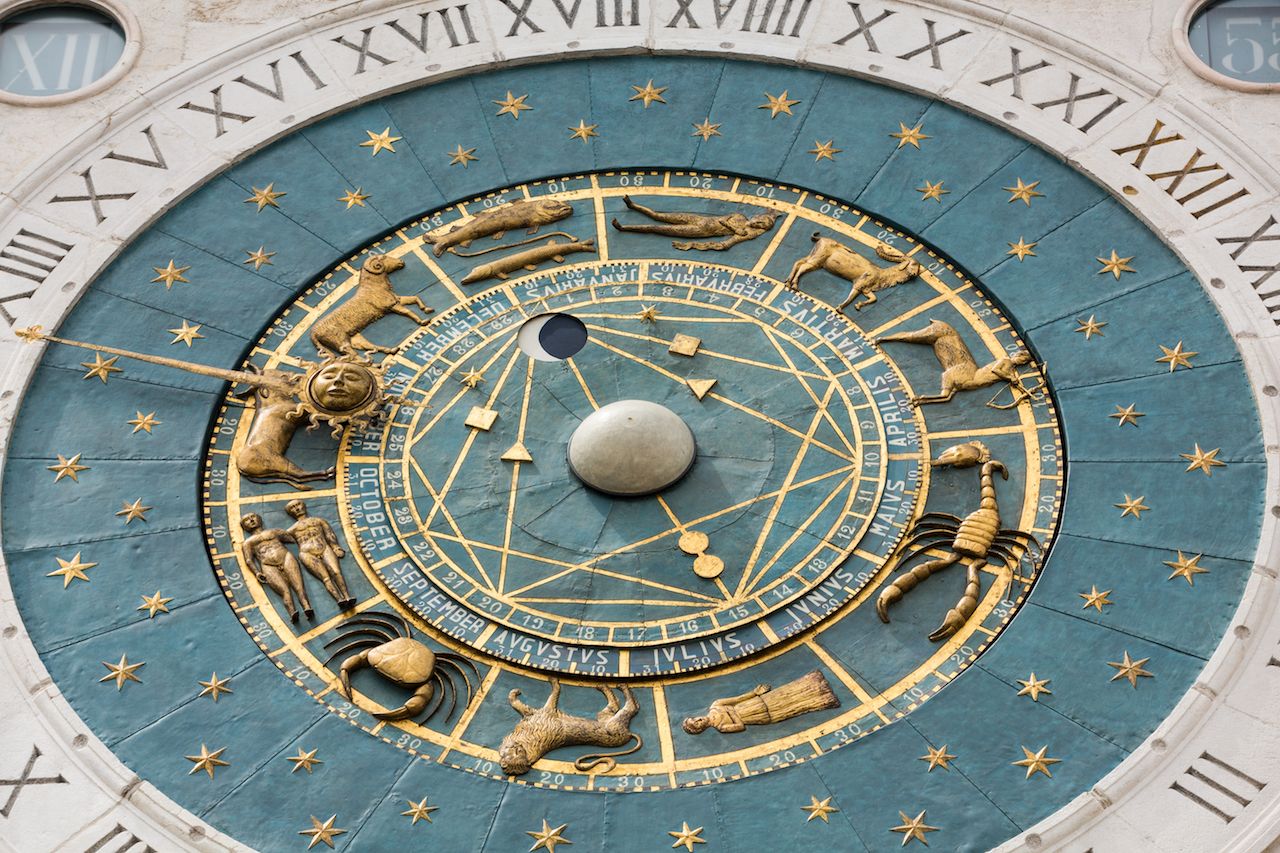 The Zodiacal Clock is a 24-hour clock, hence the 24 Roman numerals carved around the dial and the slow-moving hour hand. (It moves half as fast as a 12-hour clock.) Between the markers of the hours and the inner dial indicating the zodiacal constellations, the clock is beautifully painted in blue and decorated with gilded stars. The clock also displays the months of the year in Latin, the phases of the Moon, and other celestial events. The clock chimes every hour.