From restaurants to street stalls, dhaba (roadside eateries) to food carts, deep-fried snacks are available everywhere in India. Indian people love to snack on these as appetizers at any time of the day, before and between meals. These spicy, tangy, and crunchy snacks are bursting with ingredients like paneer, chickpeas, and lentils. Take a morning walk in the old lanes and streets in any part of the country, and you’ll find the inviting kettles of hot tea or coffee and oil bubbling in large kadhai (a deep cooking pot) in which kachauri, pakora, vada, and many other deep-fried snacks are cooked. In places like Varanasi, an entire lane is known as “kachauri gali,” dedicated to kachauris (deep-fried snacks) that are eaten for morning breakfast.

Deep-fried dishes are common as breakfast, evening snacks, starters before meals, accompaniments for drinks, and as finger foods. The most common finger foods are mini khasta kachauris with lentil filling, small samosa, and an assortment of pakoras. Traditionally during festivals and religious ceremonies, a lot of deep-fried dishes are prepared, both sweet or savory. While traveling, Indian people often carry homemade deep-fried savory snacks like nimki, chakli, or murukku. Change in seasons also dictate the choice of snacks. Piping hot crispy pakoras with a cup of hot tea or coffee tastes amazing on any cool rainy evening. Here are five of the most popular — and delicious — deep-fried Indian snacks to know. 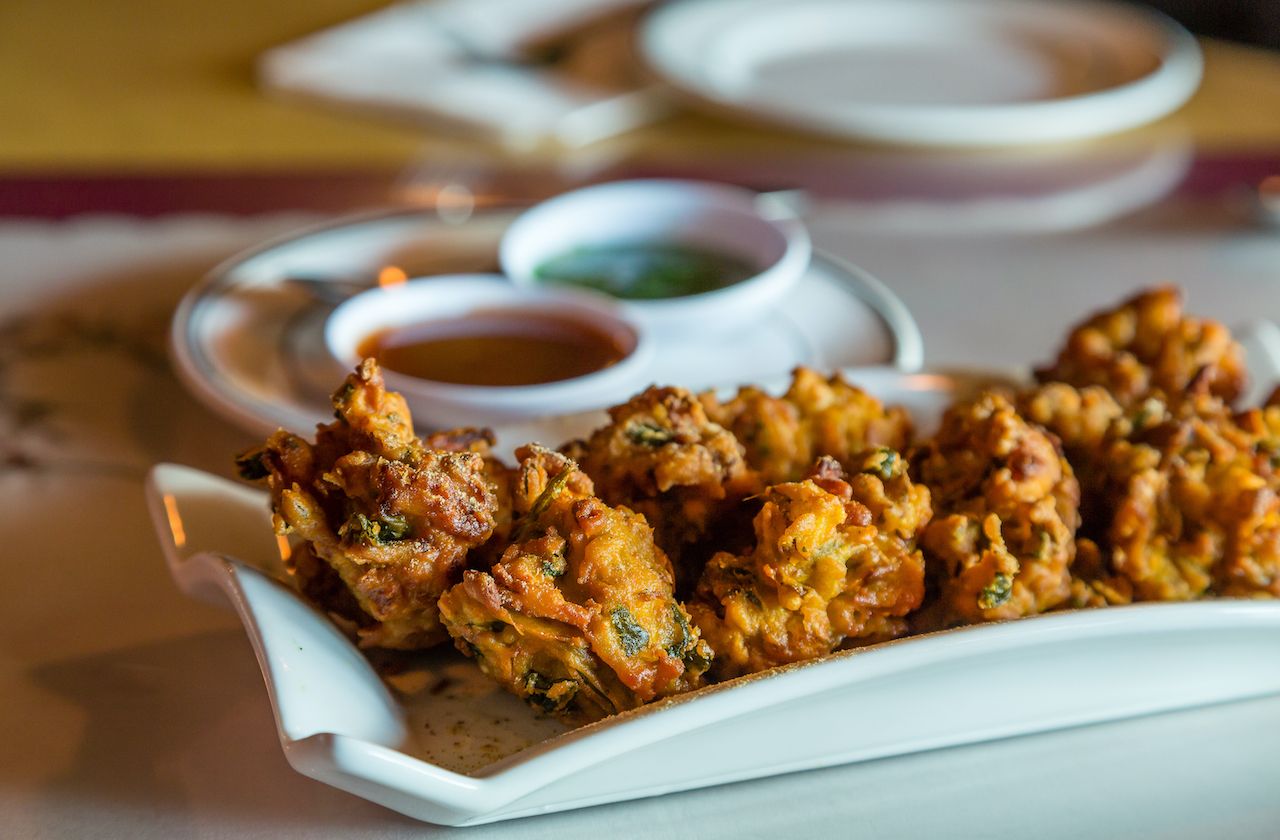 Also known as bhajjias, pakoras are crispy deep-fried snacks popular across India as a tea-time snack or side dish during meals. An assortment of vegetables can be dipped in seasoned besan (chickpea flour) and deep-fried. Common vegetables like potato, onions, brinjal (eggplant), and cauliflower, or fenugreek leaves, spinach, moong dal (green gram or mung bean), corn and cheese, paneer (cottage cheese), or even chicken and fish can all be transformed into pakoras. When balls of spicy potato dipped in besan batter are fried, they’re called aloo bonda. These taste best with spicy green chutney (coriander, mint, or raw mango), tangy tamarind chutney, or tomato sauce. Some like pakoras for breakfast, especially in cold weather. Dhabas (roadside restaurants) in the Gujarat region serve mirchi pakora (fried chilies) and methi na gota (fenugreek pakora) as breakfast. Baigan bhaja (brinjal pakora) is an all-time favorite side dish with chawal-dal (rice and lentils) for lunch in Bihar and Bengal. 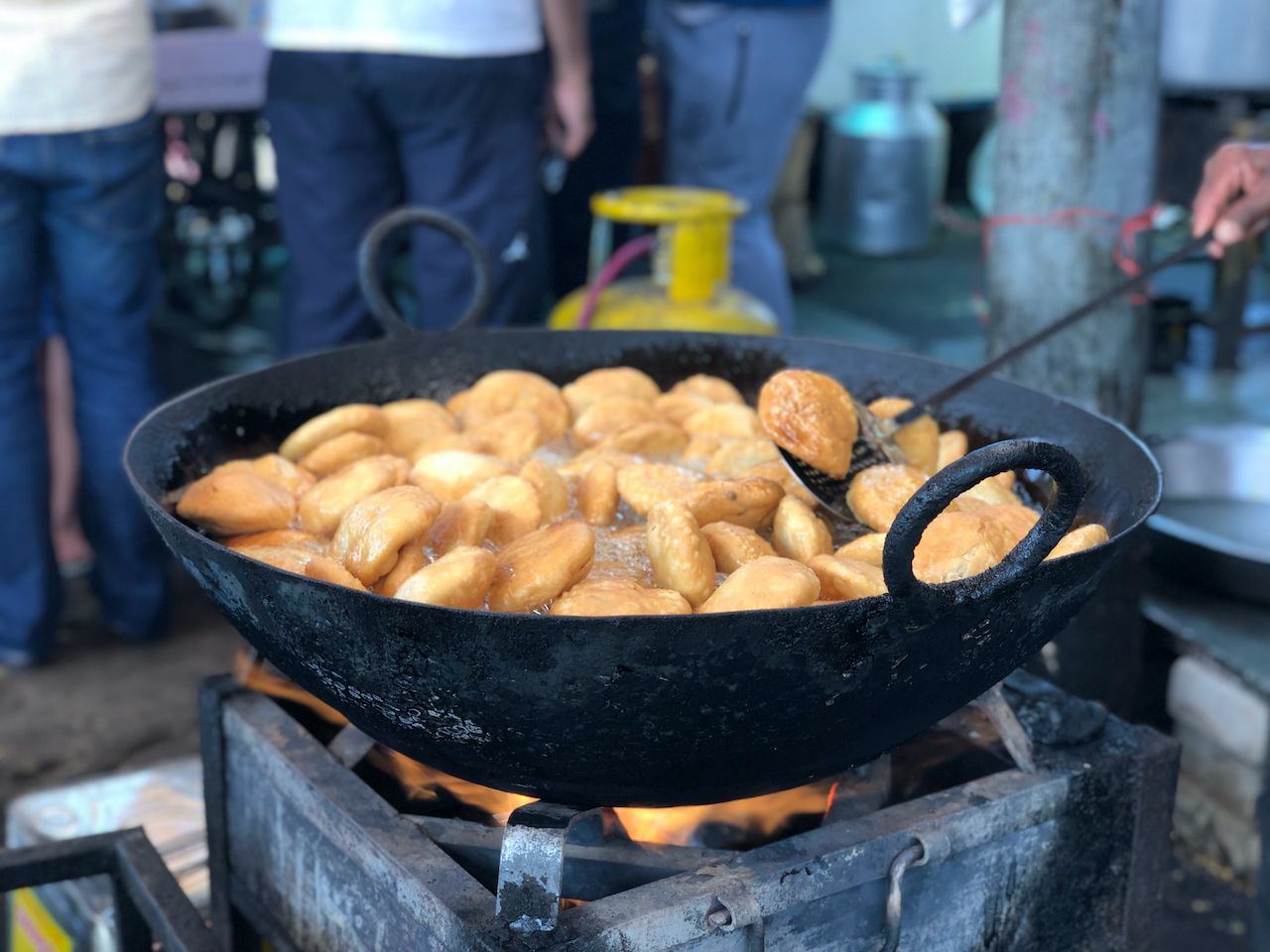 Also spelled as kachori, these deep-fried flattened circles are filled with a spicy stuffing can be made from a variety, usually yellow moong dal (mung bean), urad dal (split black gram), sattu (roasted gram flour), or mashed boiled potatoes. Pyaz kachauri (spicy onion) and dal kachori are Rajasthan’s specialty. Khasta kachauri (mung bean) and matar kachauri (peas) are common in eastern India. These snack are eaten at breakfast with hot potato curry, sweets like jalebi, or with pickles. During festivals, many varieties of kachauris are prepared in the home. 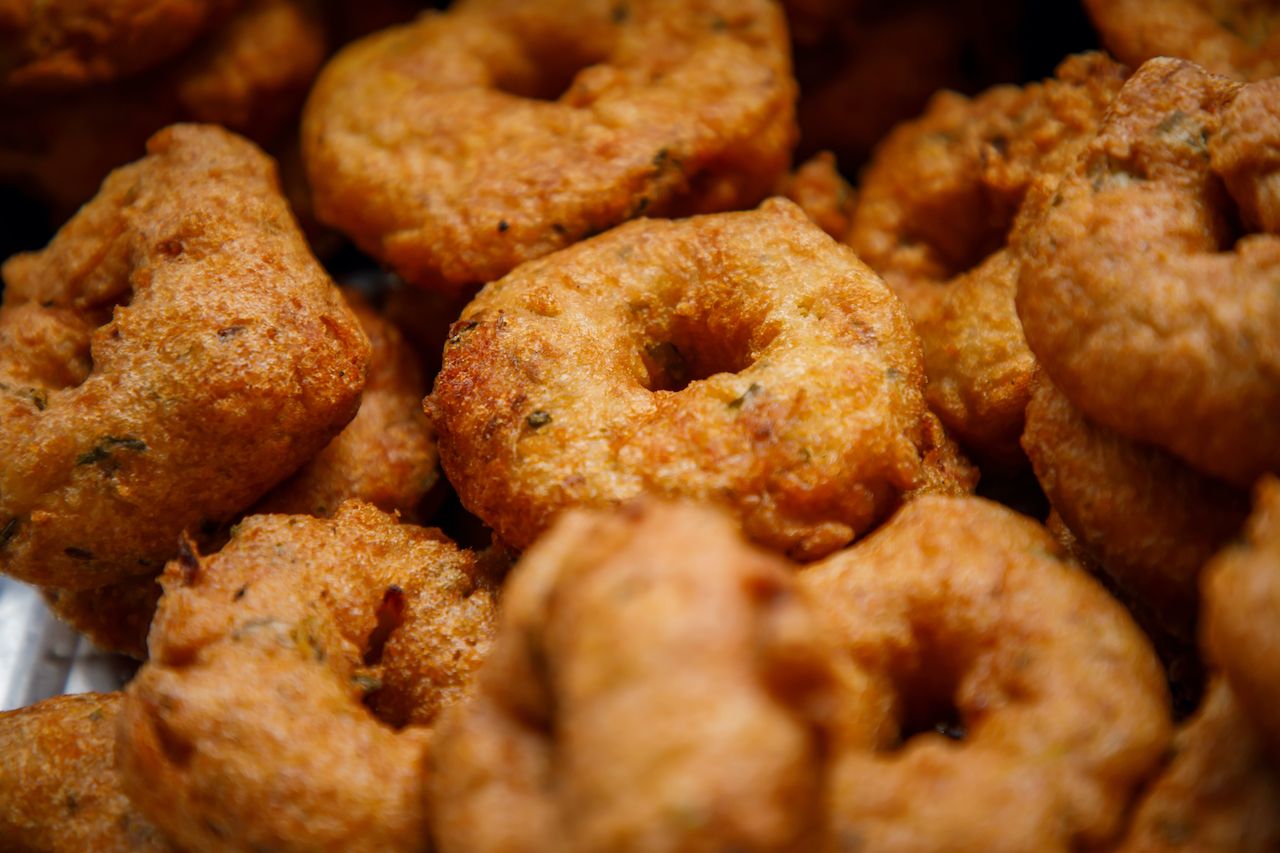 Vada are traditional south Indian deep-fried fritters that are round and flat or with in the center hole like doughnut. This crispy ring-like snack has a crunchy bite but soft inside. Vada is sometimes deep-fried in rice flour that is seasoned with a mix of onions, curry leaves, and coconut, until it’s golden brown.

Varieties include medu vada, made with urad dal, and sambhar vada, made with lentil curry. The latter is a common breakfast dish in south Indian homes, especially Tamil Nadu. Masala vada, a spicy version of vada, is a popular street food in the same region. Vada is sometimes served with a nariyal (coconut) chutney on the side. In north India medu vada is soaked in yogurt to make dahi vada, a refreshing dish enjoyed in the summer. Sabudana vada, made with starch derived from tapioca roots, is a common snack during periods of fasting in the western state of Maharashtra. 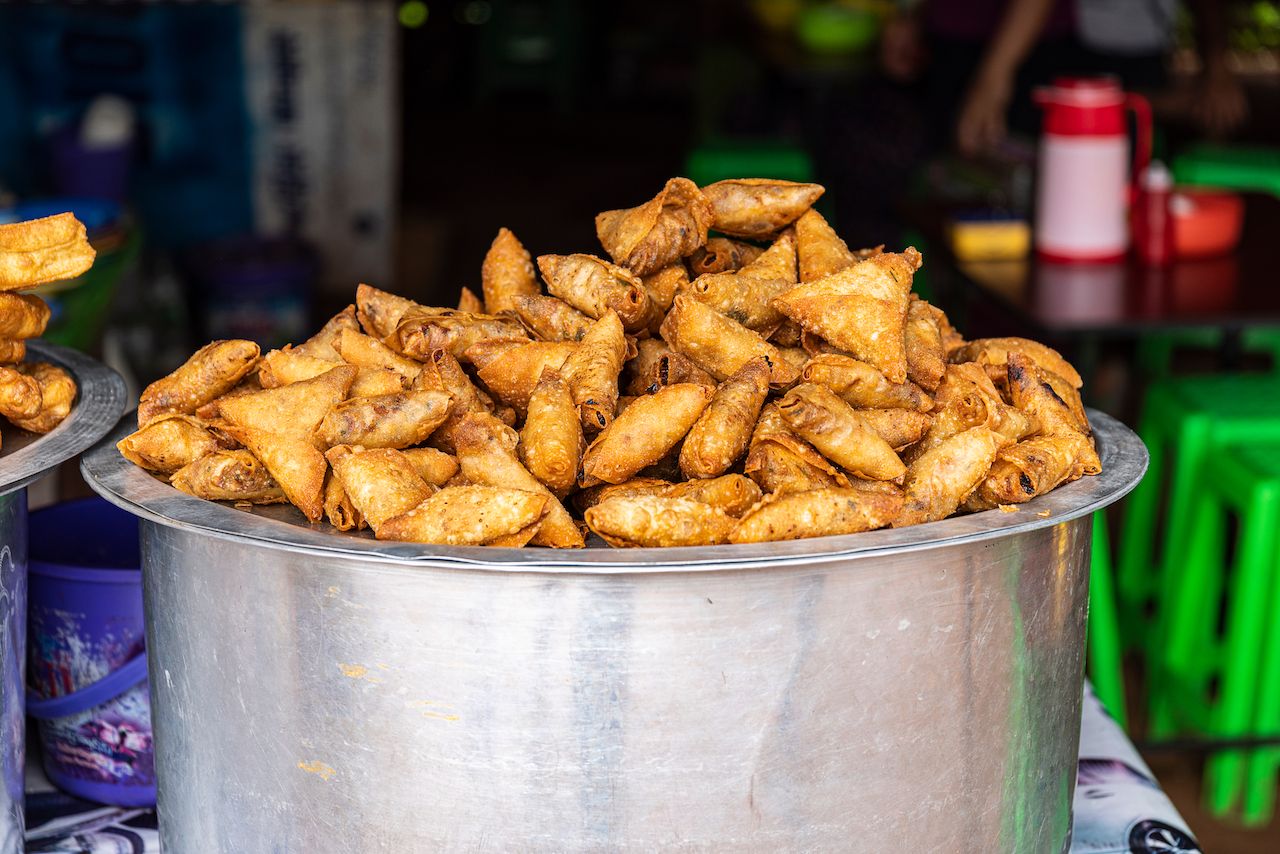 Samosa is a deep-fried triangular pocket with spicy savory filling. It is one of the most popular snacks in north and east India. The common stuffing is a mixture of seasoned boiled potatoes. The samosa chaat is one variation made with smashed samosas topped with chickpeas. Rajasthan’s mini samosas are sometimes filled with lentils, but you can find a variety of samosa fillings nowadays, including spicy peas, keema (minced mutton), and paneer (cottage cheese). Popular in Hyderabad, lukhmi is a square samosa stuffed with spicy and tangy keema (ground beef and potatoes), sometimes served as an appetizer at weddings. 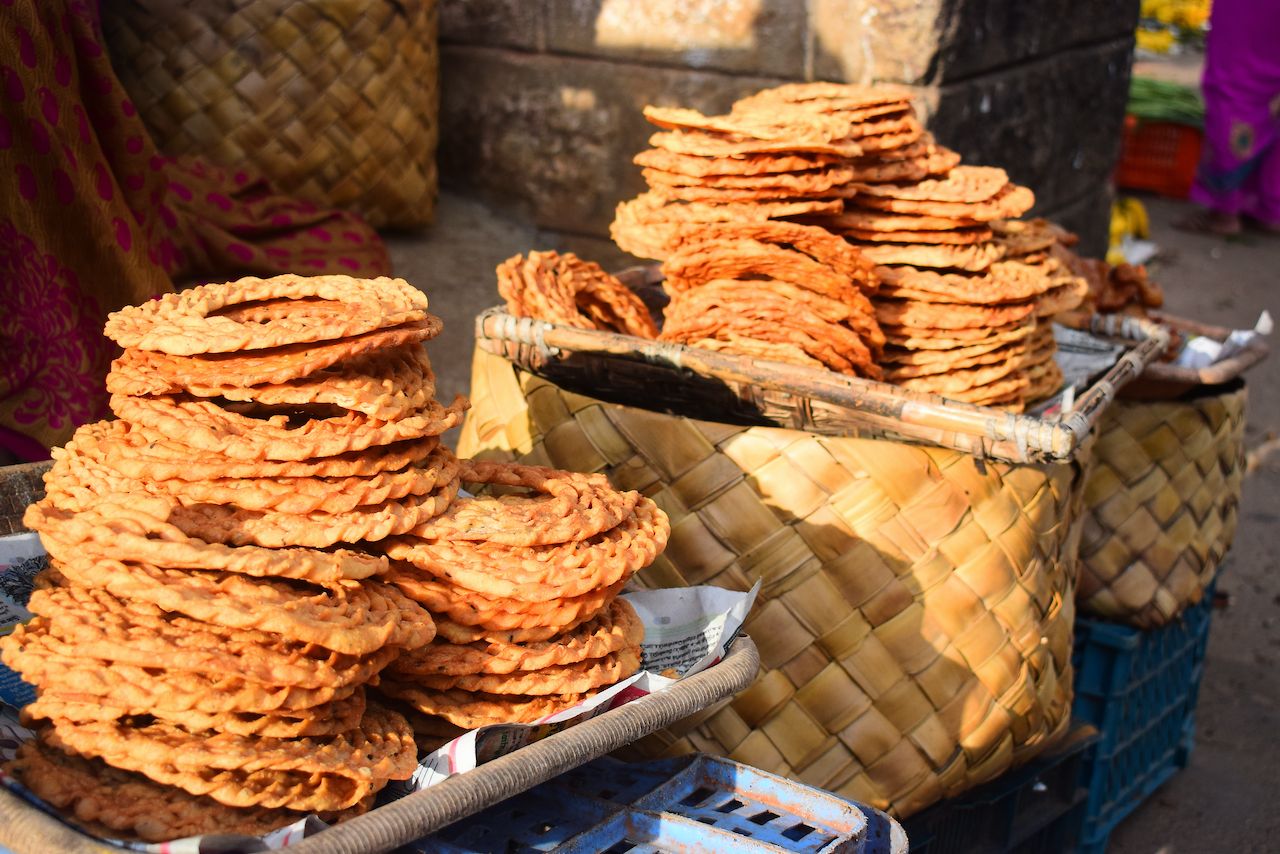 Murukku is twisted into a spiral and deep-fried until crunchy. This savory snack is made from a combination of rice flour and urad dal. It is a traditional snack served at festivals like Diwali and Janmashtami and special occasions. There are a lot of variations of murukku, using different ingredients and known by different names in several parts of India. In southern Telangana state, the snack is called sakinalu, and is prepared during Makar Sankranti festival from rice flour, carom seeds, and sesame seeds. In the western states of Maharashtra and Gujarat, it is called chakli and chakri respectively, and is formed into concentric circles.

Dessert10 Delectable Indian Desserts Anyone With a Sweet Tooth Will Love
Tagged
Food + Drink India
What did you think of this story?
Meh
Good
Awesome