Denmark has been at or near the top of “happiest country in the world” lists for more than a decade. Lots of things contribute to that — social welfare, free higher education, and low crime, to name a few. Another is the food, specifically smørrebrød. The birthplace of Hans Christian Anderson and hygge is also home to a sandwich that belongs on any and all “best sandwiches in the world” lists.

The roots of smørrebrød date back to Europe in the Middle Ages, when people had a propensity for using stale bread as plates. What we now recognize as smørrebrød, however, dates back to the late 1800s, when Denmark was largely an agricultural country. Farmers needed a filling lunch that was easy to take to the field, and a smørrebrød topped with the previous night’s leftovers was often the answer. 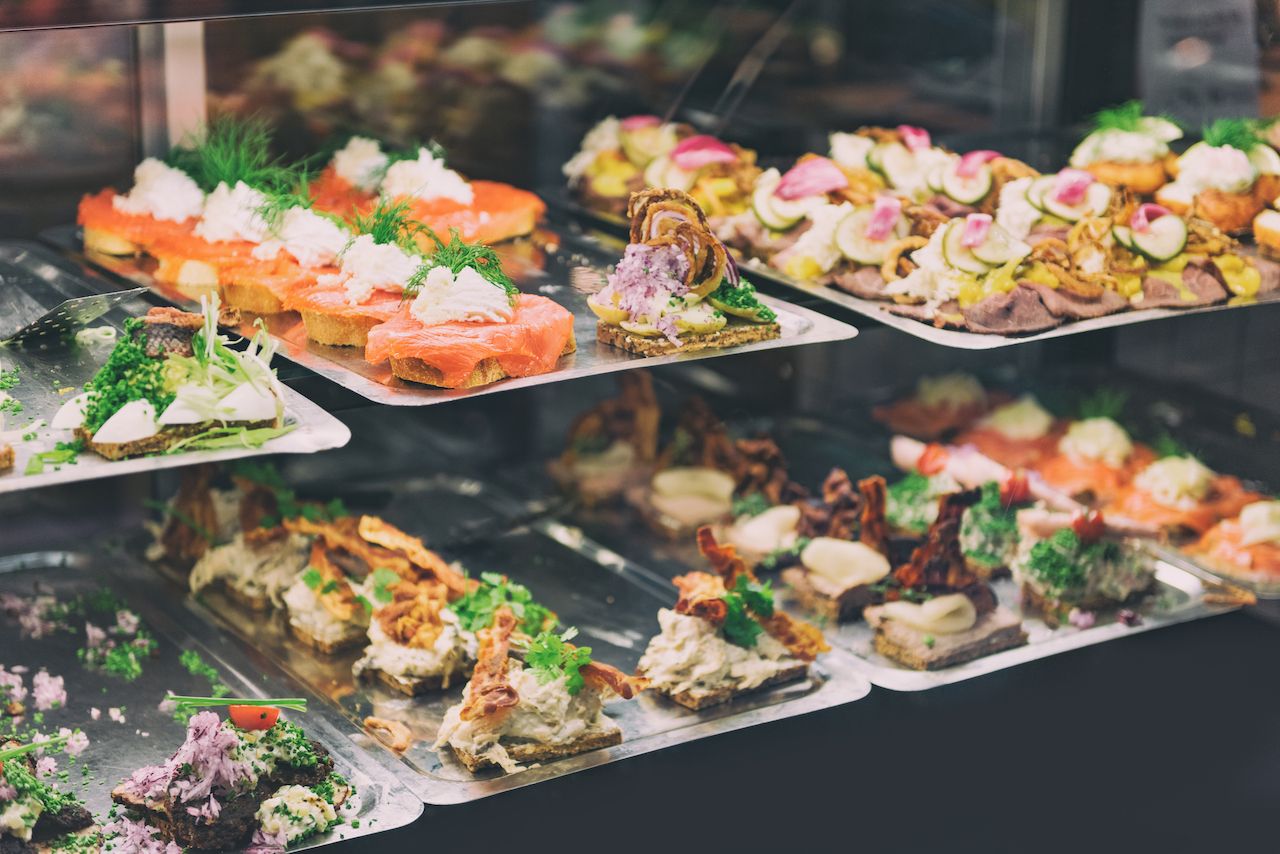 The beauty of smørrebrød lies in its simplicity. That said, it needs to be made with top-quality ingredients, starting with the bread. Danish rye bread, rugbrød, is typically a sourdough, surdeg, that’s made with rye flour, whole grains, and seeds. Rugbrød almost always uses natural yeast rather than having commercial yeasts added in, which gives the bread a sour taste that plays off of the thick texture. Bakers use sourdough starters that they’ve cultivated to quicken the process. Sourdough starters are used for batch after batch, and the same starter can last decades when watched by someone dedicated to keeping the yeast alive.

“It’s like having a pet in your home, it’s a living creature,” says Nicola Gozzi of Vinværten Gothersgade, a wine and tapas bar in Copenhagen.

Regular white bread and even high-wheat rye breads won’t do, as it takes a hardy rye bread to stand up to all of the ingredients on top. After the base comes a layer of butter or fat (the word smørrebrød comes from combining the words smør og brød, or butter and bread). 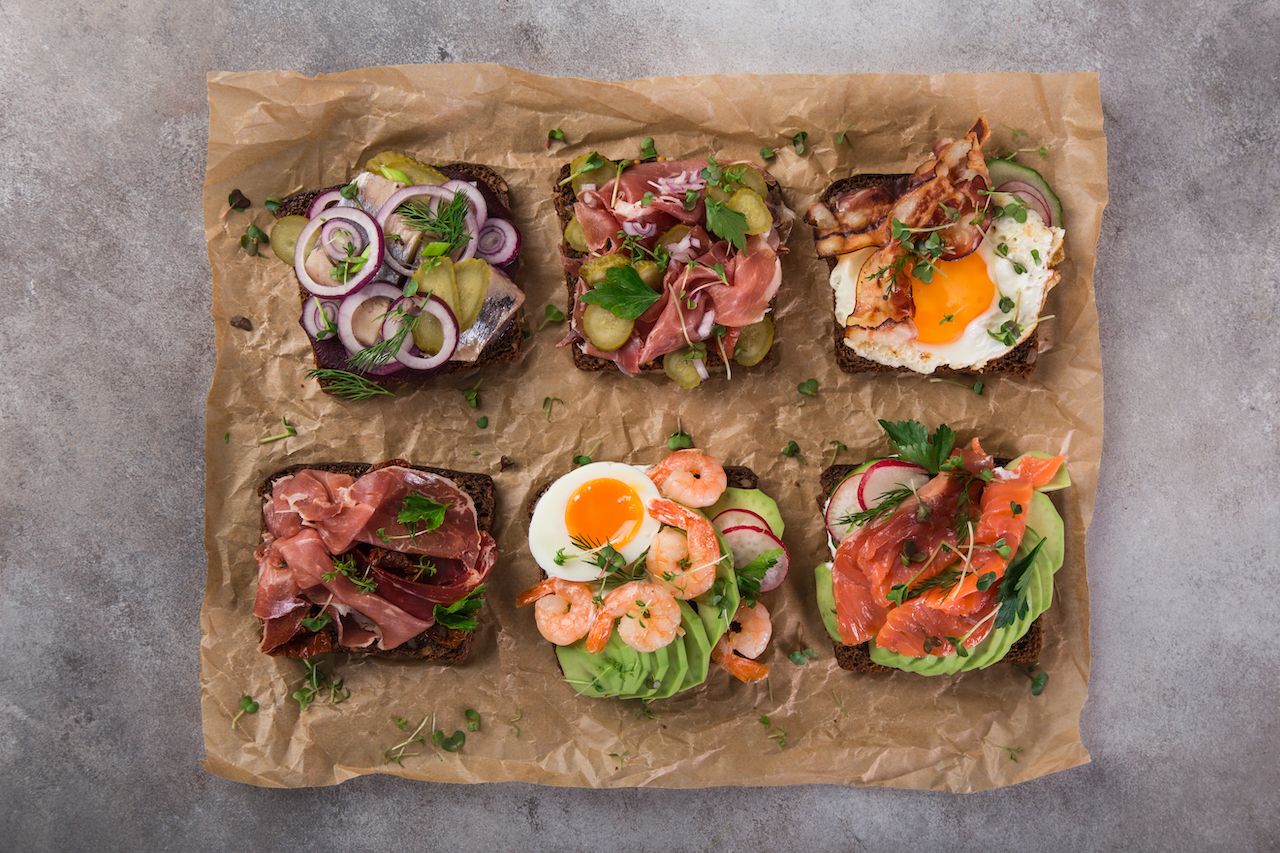 Finally, there are the toppings. There are more than 30 toppings that can be used, but the most popular are egg and roast beef, and pan-fried white fish, according to Gozzi. Other combinations include shrimp and egg, egg and tomato, herring, remoulade (a mayonnaise-based condiment), Danish meatballs, taters, and curry marinated fish. Then there’s the traditional Danish dyrlægens natmad, a smørrebrød topped with a layer of butter or fat, leverpostej (liver pâté), meat stock, and sliced red onions. People at home make a simple egg smørrebrød, while chefs at restaurants get really creative, Gozzi says.

Drinks are often served alongside smørrebrød. There are a lot of Danish beers to choose from (many made with rye), as well as snaps, a neutral liquor spiced with herbs or fruit that’s the Danish version of German schnapps. On holidays, families and friends come together to build their own smørrebrød at home or at a restaurant, where a huge table of bread and toppings is laid out to mix and match a custom sandwich. In that case, there’s always snaps involved, and the meal is accompanied by plenty of chances to raise a glass and say skål (cheers).

Smørrebrød is deeply ingrained in Danish culture. Eduardo Ebbesen, the head lunch chef at Vinværten, explains that there is a steady stream of regulars who order smørrebrød every day.

“Everyone ate it for lunch at school, so it now carries a nostalgic feel,” Ebbesen says. “It’s more than just food. It makes you feel like a kid again, which is why it will never disappear.”

Budget TravelThe Best Free (and Almost Free) Things To Do in Copenhagen
Tagged
Food + Drink Denmark
What did you think of this story?
Meh
Good
Awesome

This Map Shows Hilarious Literal Translations of Places in Denmark

This Tiny Danish Town Is Getting Western Europe’s Tallest Skyscraper