In 1959, Hollywood, Florida, might have well been on Mars. And that’s exactly how stars from Hollywood, California, liked it.

The Diplomat, an eight-story beach resort set on the A1A was surrounded by nothing, meaning the likes of Frank Sinatra, JFK, and other Golden-era celebs could hide out here far from the prying paparazzi.

Today, the Diplomat Beach Resort Hollywood, as it’s named, looms a little larger than it did in the 1950s. It is a 36-story, 1,000-room behemoth standing as the centerpiece of the modern Hollywood skyline. And though its size, location, and opulent suites still make it a popular destination for celebrities, the reasonable prices and ample amenities make it equally alluring for budget-minded beachgoers.

We hope you love the Diplomat Beach Resort Hollywood! Just so you know, Matador may collect a small commission from the links on this page if you decide to book a stay. Listed prices are accurate as of the time of publication.

A lobby filled with palm trees and teak bungalows 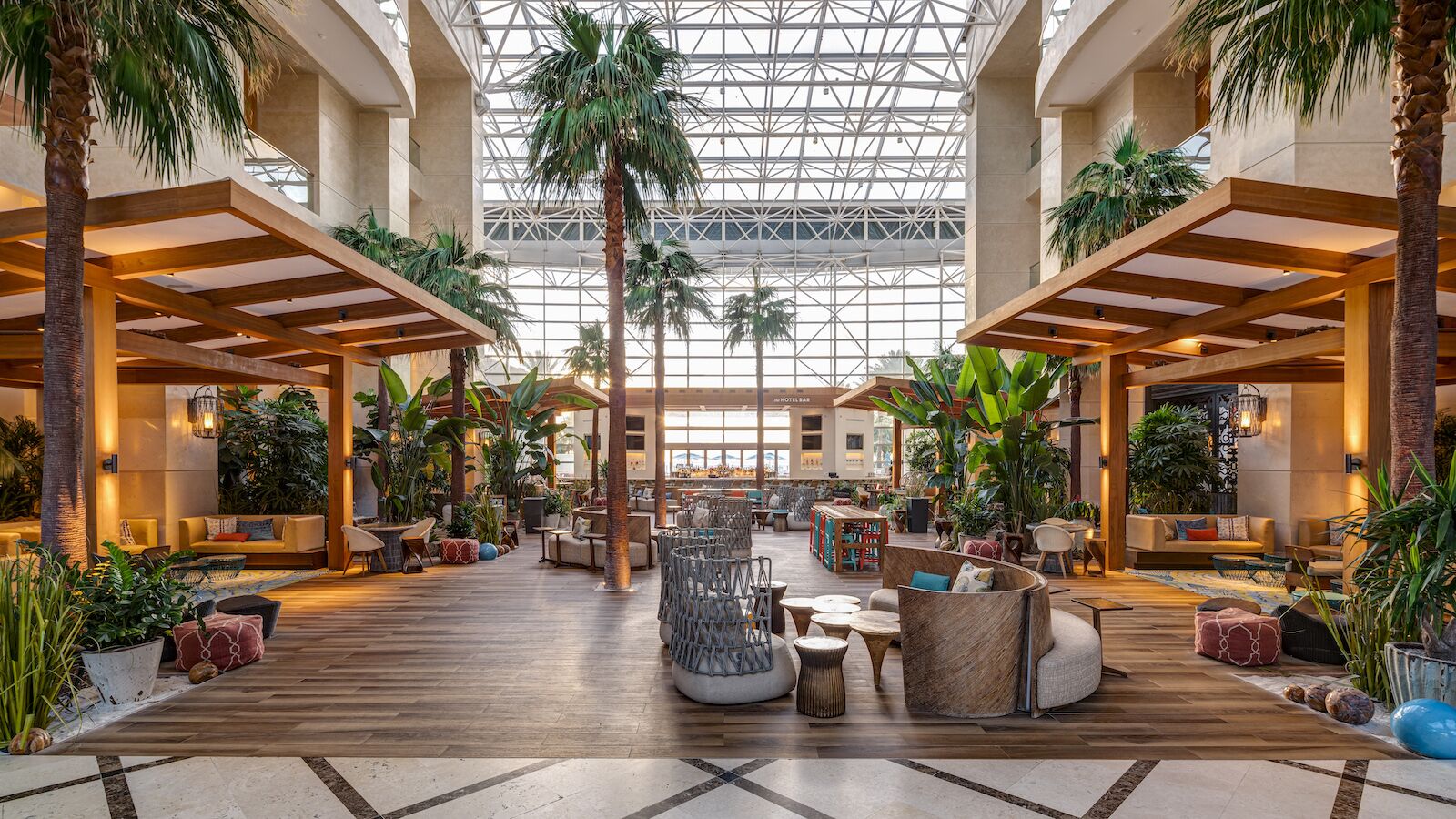 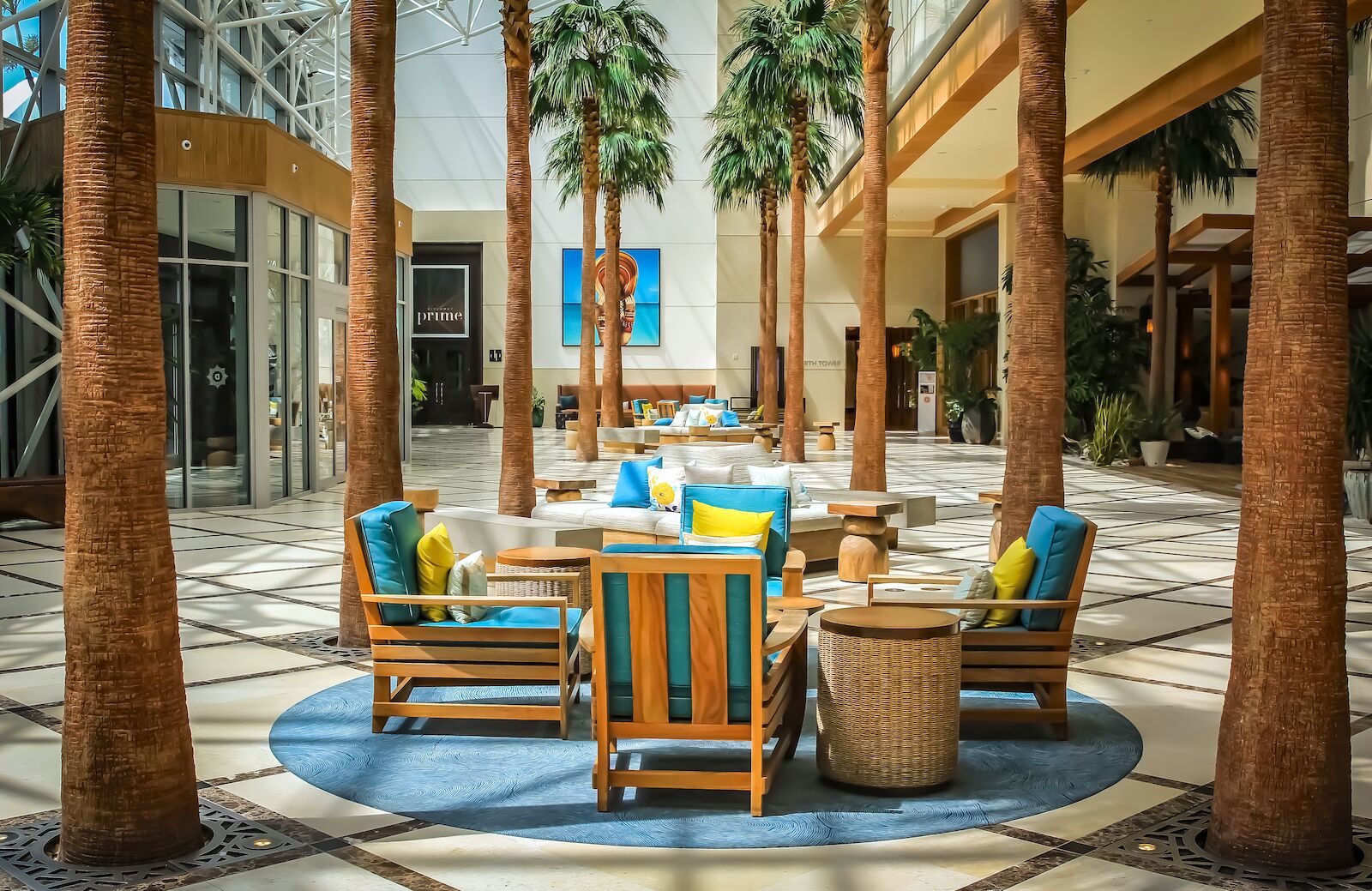 The Diplomat Beach Resort Hollywood is a two-tower, full-service resort set right on the sand in Hollywood, Florida. That’s about 35 to 40 minutes north of Miami and about 15 minutes south of Fort Lauderdale. Its location between the Atlantic Ocean and Intracoastal Waterway also gives it the only unobstructed views of both the sunrise and sunset from Hollywood Beach.

The Diplomat’s entrance is nothing short of grand; guests arrive into a towering glass atrium dotted with palm trees and custom teak lobby cabanas. The cabanas — also outfitted with custom couches — offer plugs and USB ports, so mobile workers often post up here for the afternoon, even when they’re not guests.

The faux-wood floors are inspired by the planks on the old Hollywood boardwalk just north of the hotel. It’s a subtle touch and one of many small nods to the hotel’s history you’ll find throughout the Diplomat Beach Resort Hollywood.

A lagoon pool and a beach, with a bar in between 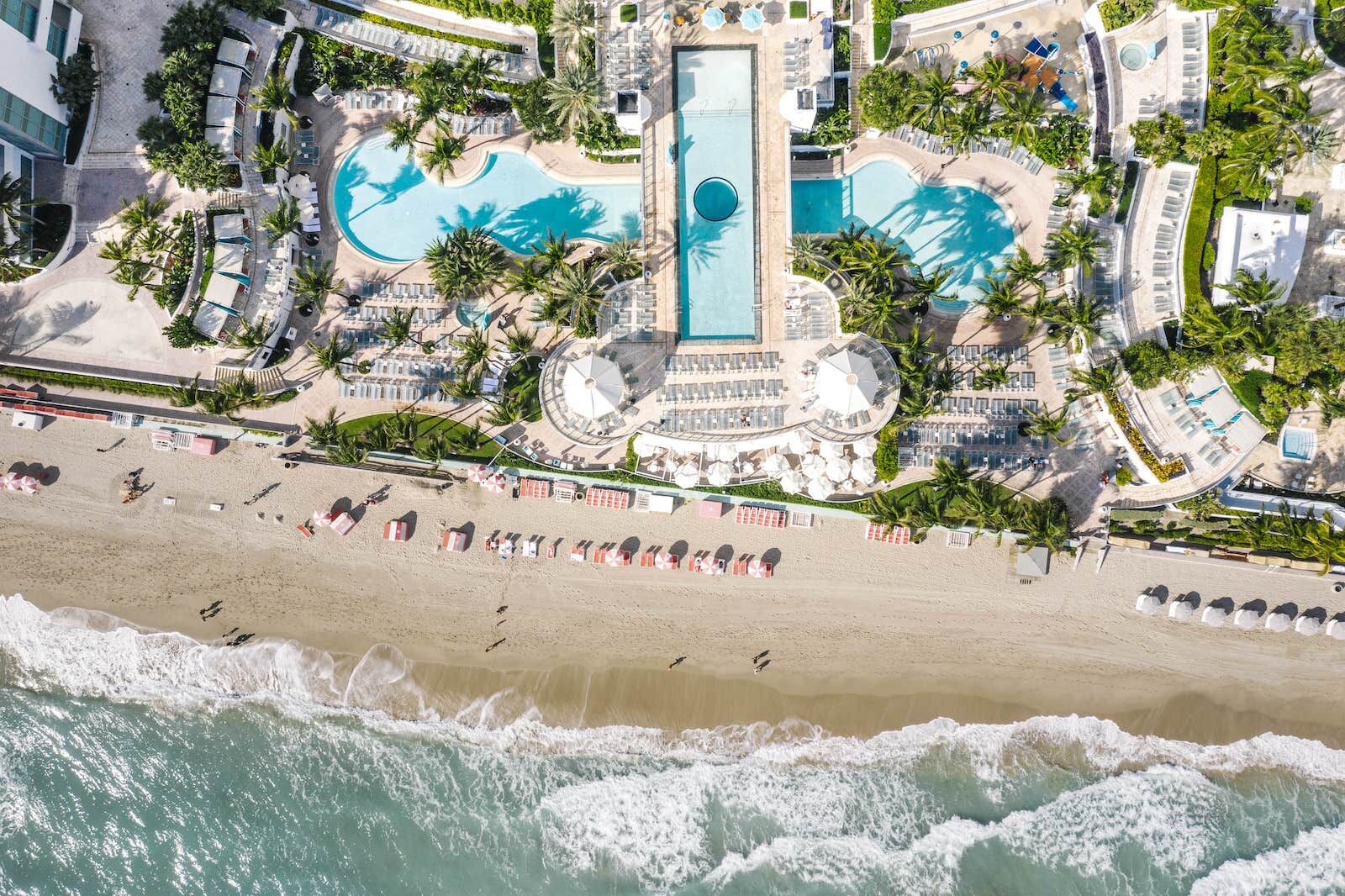 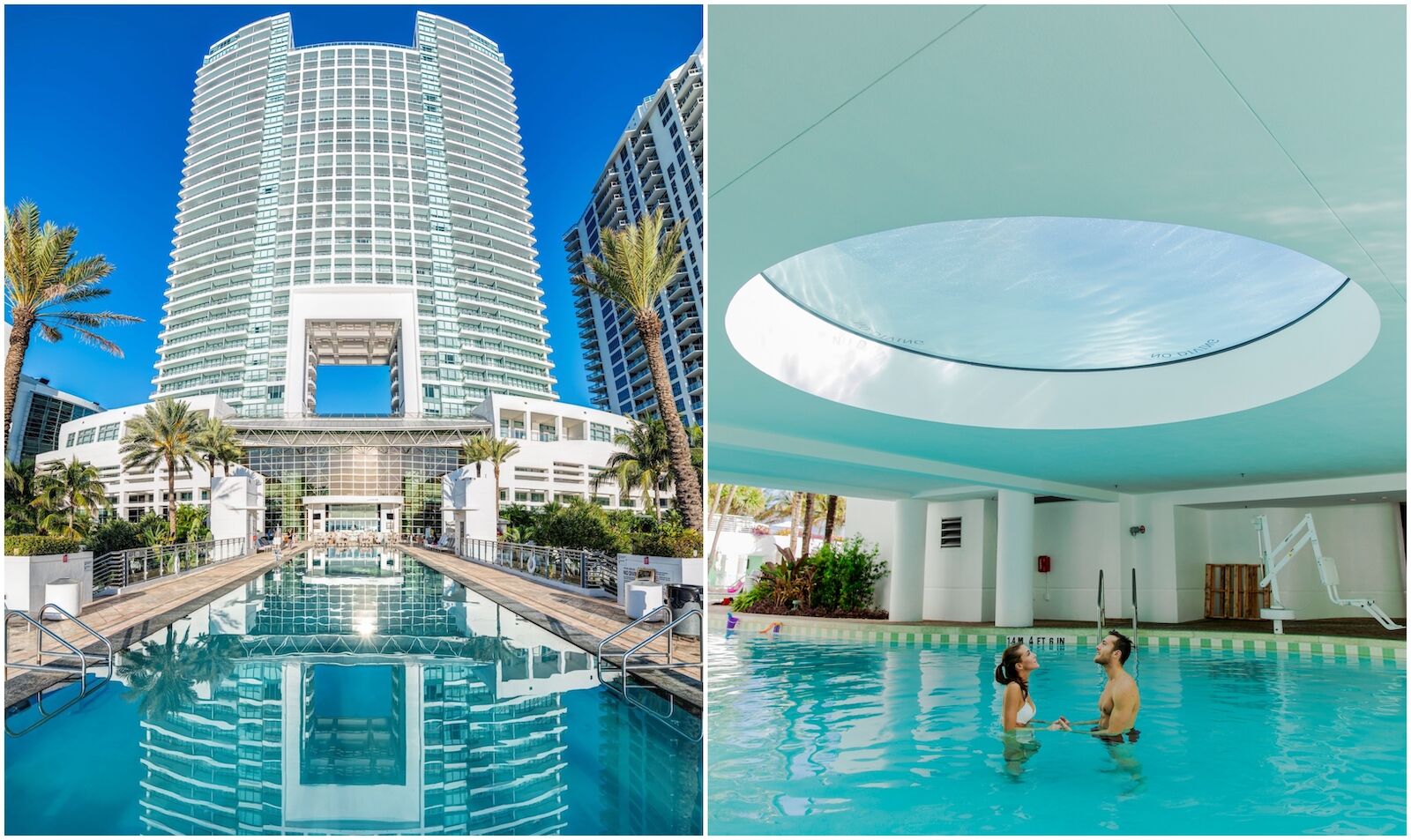 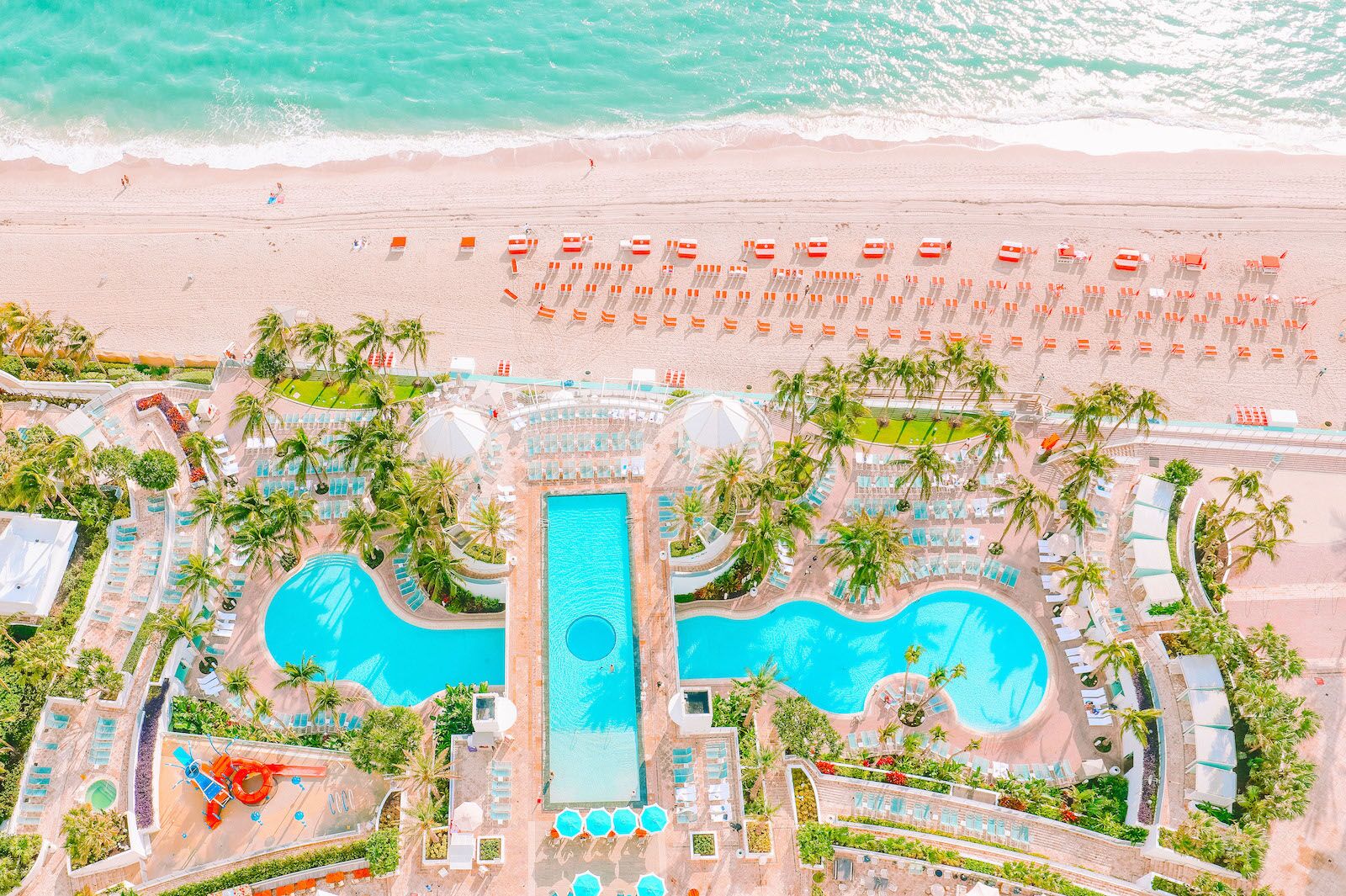 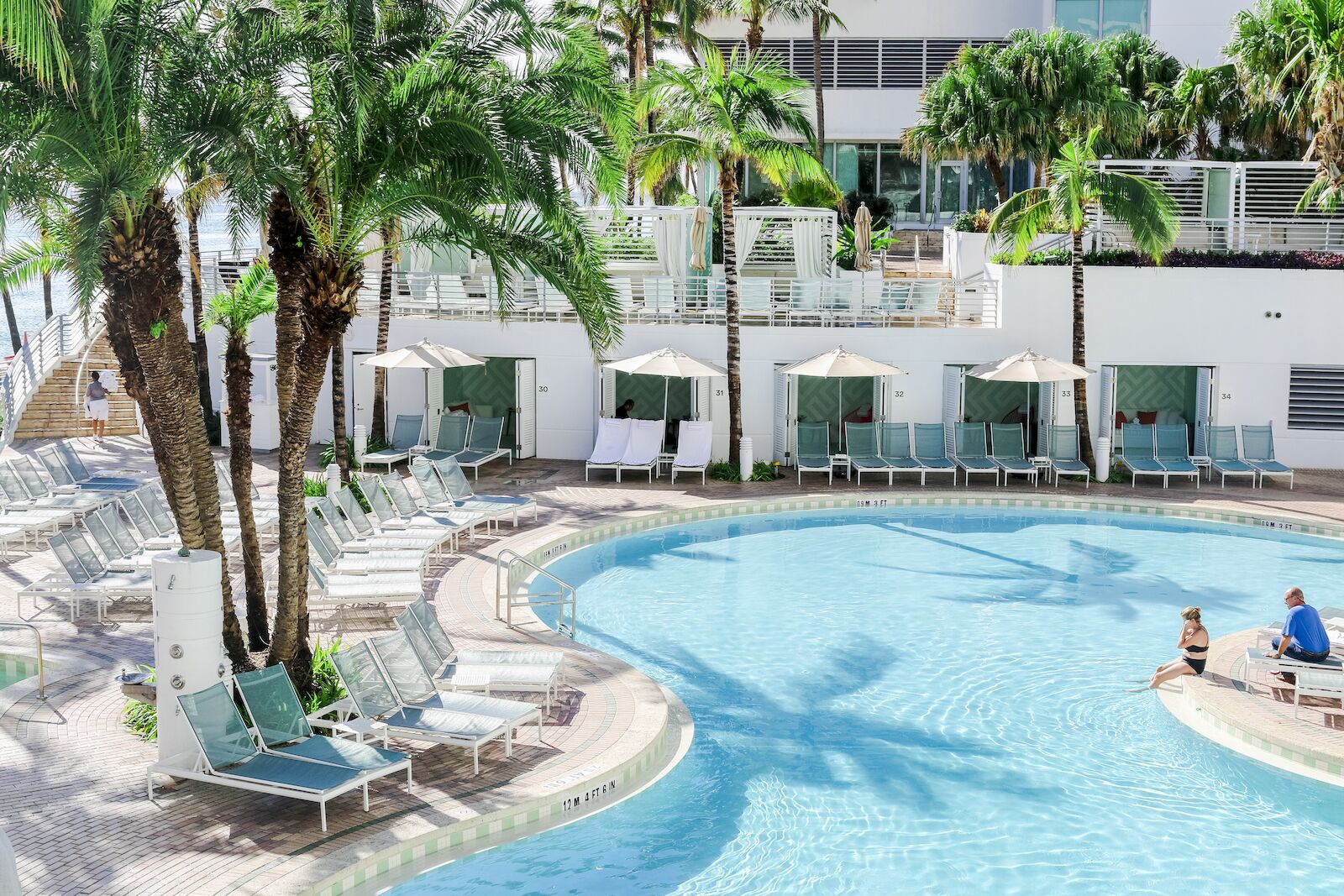 The lobby leads almost seamlessly out to the Diplomat’s Backyard, a homey euphemism for the sprawling pool deck. The first stop is the top-floor infinity pool, lined with recliners and a direct view of the Atlantic. Step down a spiral staircase at either end of the deck and you’ll find the Diplomat’s meandering lagoon pool, the ceiling above which is fitted with a circular window showing the inside of the infinity pool one story up. Gaze up, and you’ll see the feet of children wading overhead.

Tropical foliage and private cabanas built into the surrounding walls surround the lagoon pool. The Trina Turk-designed spaces have flat screen TVs, retro purple SMEG refrigerators, fans, sofas, and private waiter service. You can also close the doors if you’d like to shut out the outside world, 1959 celebrity style.

The pool deck is outfitted with a small water slide tower, two hot tubs, and plenty of lounge chairs. In the middle you’ll find Playa, the Diplomat Beach Resort Hollywood’s beach bar and restaurant. It offers all your classic frozen cocktails as well as Frosé. And while the regular cocktails trend a little sweet, the Hollywood Spice with passion fruit and habanero bitters makes for a spicy alternative if you ask for it without the syrup.

All of it, of course, tastes better with your toes in the ocean, and you can take your drinks onto the Diplomat’s 1,000-foot beach just behind the pool. Technically, the beach is public, but it’s difficult to reach unless you’re staying at the hotel. And on weekends, the Backyard is wristband-controlled, meaning only hotel guests have access.

At the Diplomat Beach Resort Hollywood, the rooms are designed to accent the views

While the stunning views and luxurious amenities in the rooms at this AAA Four Diamond resort are nothing short of spectacular, perhaps the biggest draw at the Diplomat is its price point. Because the resort has 1,000 rooms, filling them is unusual. That means the rates for oceanfront rooms with private balconies are a fraction of what they are at comparable spots on the beach. 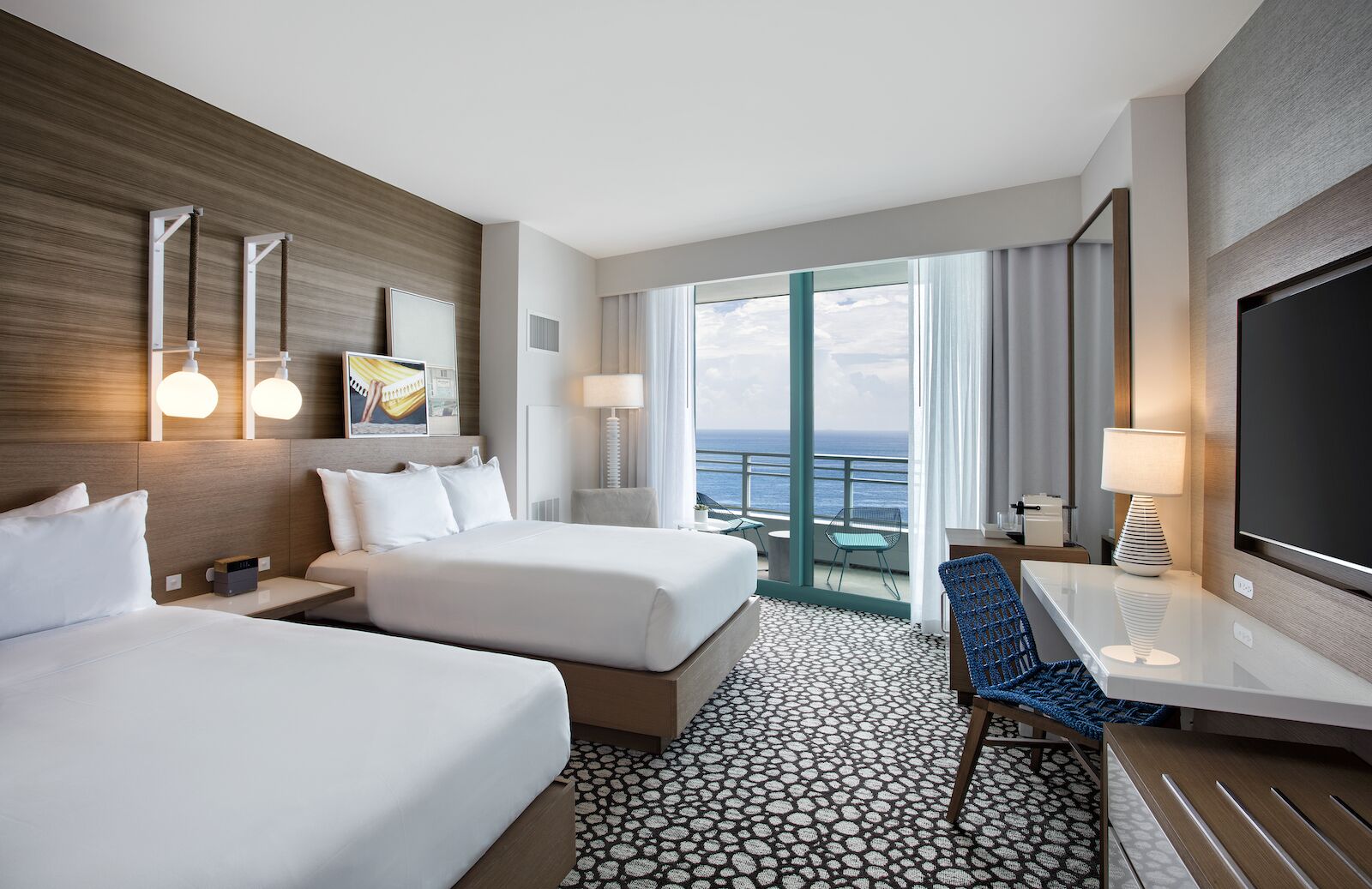 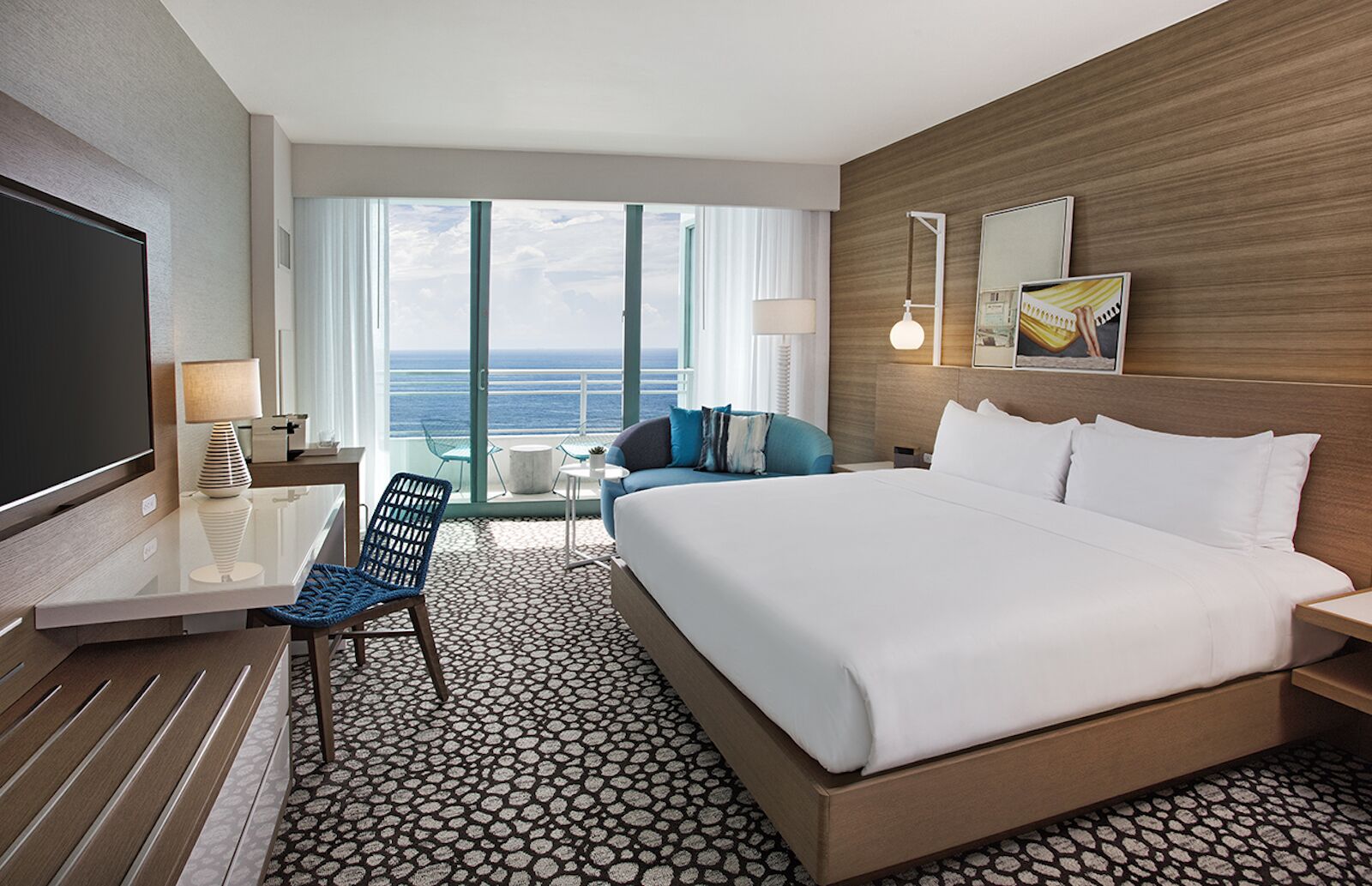 Case in point: The Diplomat’s entry level room — the Intracoastal Double — can be had for just under $200 a night. For that, you get 381 square feet of mid-century modern design, leading out to a balcony overlooking the sunset and the Intracoastal Waterway. The large room is done up in colors to match, a soothing tableau of purples, oranges, and reds. In the bathroom, you’ll find a shower and a soaking tub, an almost unheard-of amenity in a basic room. What’s more, the bathtub is set under white wood shutters that can be opened if you want to watch the sun go down while you soak.

Across the hall you’ll find oceanfront King rooms, done up in a color scheme to match the ocean view outside. These 407-square-foot rooms are decorated in immersive shades of blue. They too have a separate tub and shower, a feature incorporated by the National Plumbers Union, which was once a partial owner of the hotel.

For a little more space, guests can opt for the popular corner ocean suites. These 712-square-foot palaces average around $500 a night and offer wrap-around balconies and towering views out onto the ocean. The large living rooms are equipped with a pull-out sofa bed and a high-top table for four. In the bedroom, you’ll find a large walk-in closet, as well as a rainshower and bathtub. Though unlike in the standard rooms, this bathtub doesn’t come with a view. This room is ideal for a family with one child, or if you want to do a little after-dinner entertaining with cocktails by the TV, or cigars on the balcony. 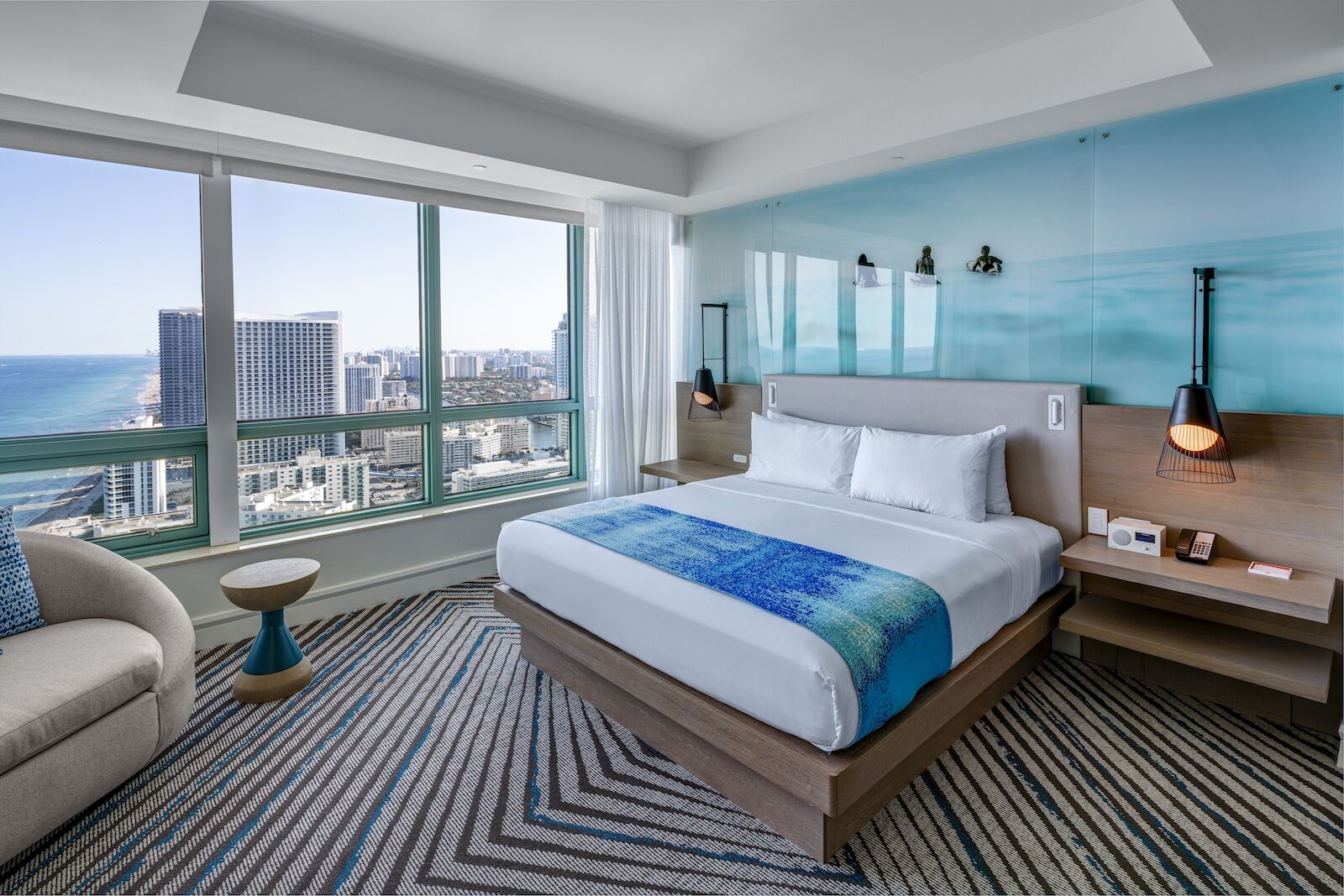 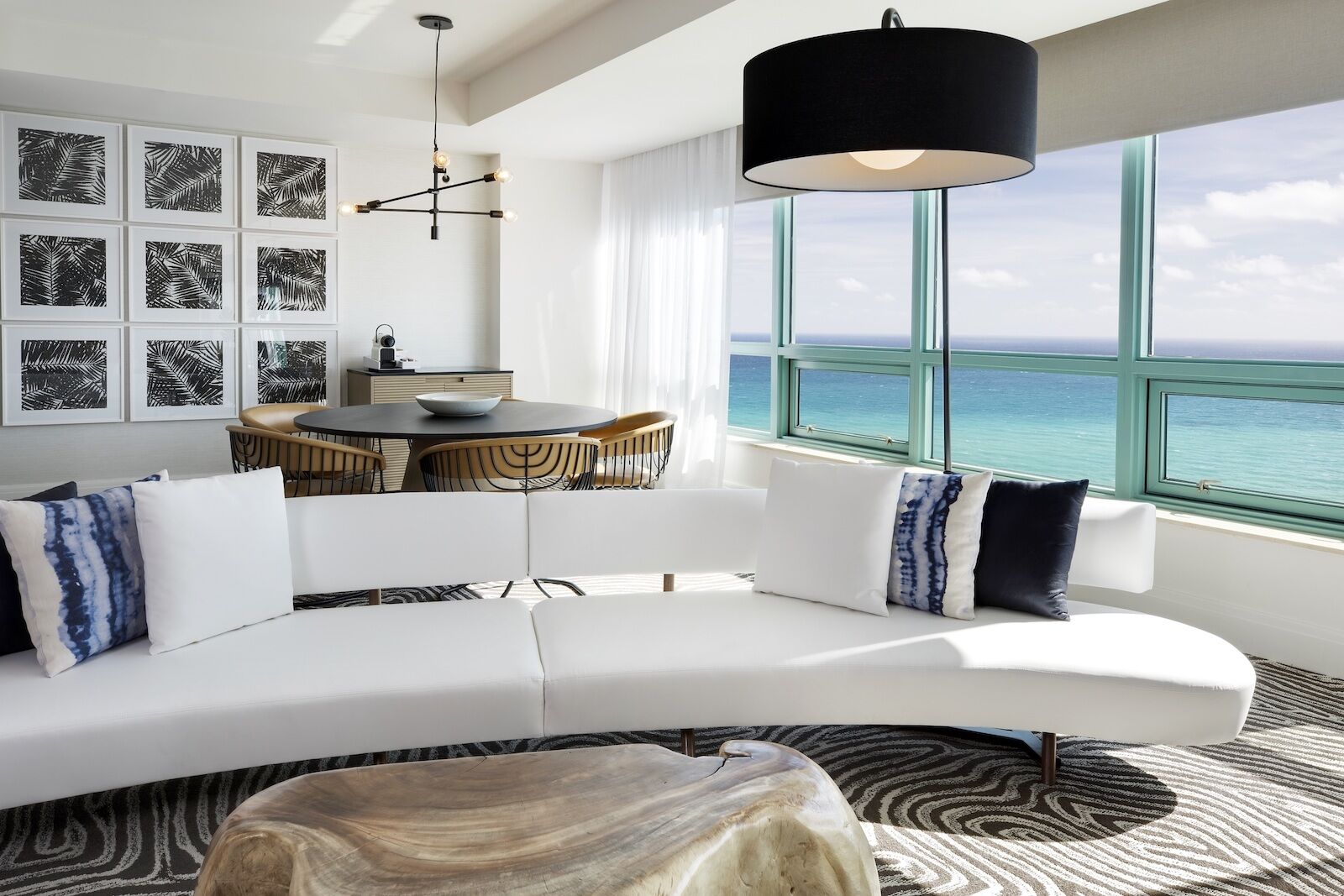 The most impressive rooms in the hotel are the Presidential Suites, where balconies afford views from downtown Fort Lauderdale to downtown Miami, out to the Everglades and off to the Atlantic. You can, quite literally, see all of South Florida from this vantage point, probably why the suite has been the room of choice for the likes of Tom Brady, Donald Trump, and other traveling dignitaries.

The Penthouse Suites are nearly as jaw-dropping as the Presidential ones, large, open-floor-plan suites where the bathrooms offer ocean views from the shower, bathtub, and toilet. While neither suite is cheap, the $2,000- to $3,000-per-night price tags can be less than half of what comparable rooms fetch in similar hotels.

With such an abundance of rooms — and close proximity to Hard Rock Stadium — the Diplomat has also become a regular hotel for visiting NFL and college football teams, as they can block off entire floors without any bother from the visiting masses. A top-floor private dining space makes things even easier, so if you’re here during football season, don’t be shocked to see a team bus pull up on Sunday morning.

A prime steakhouse inside, fire tacos outside 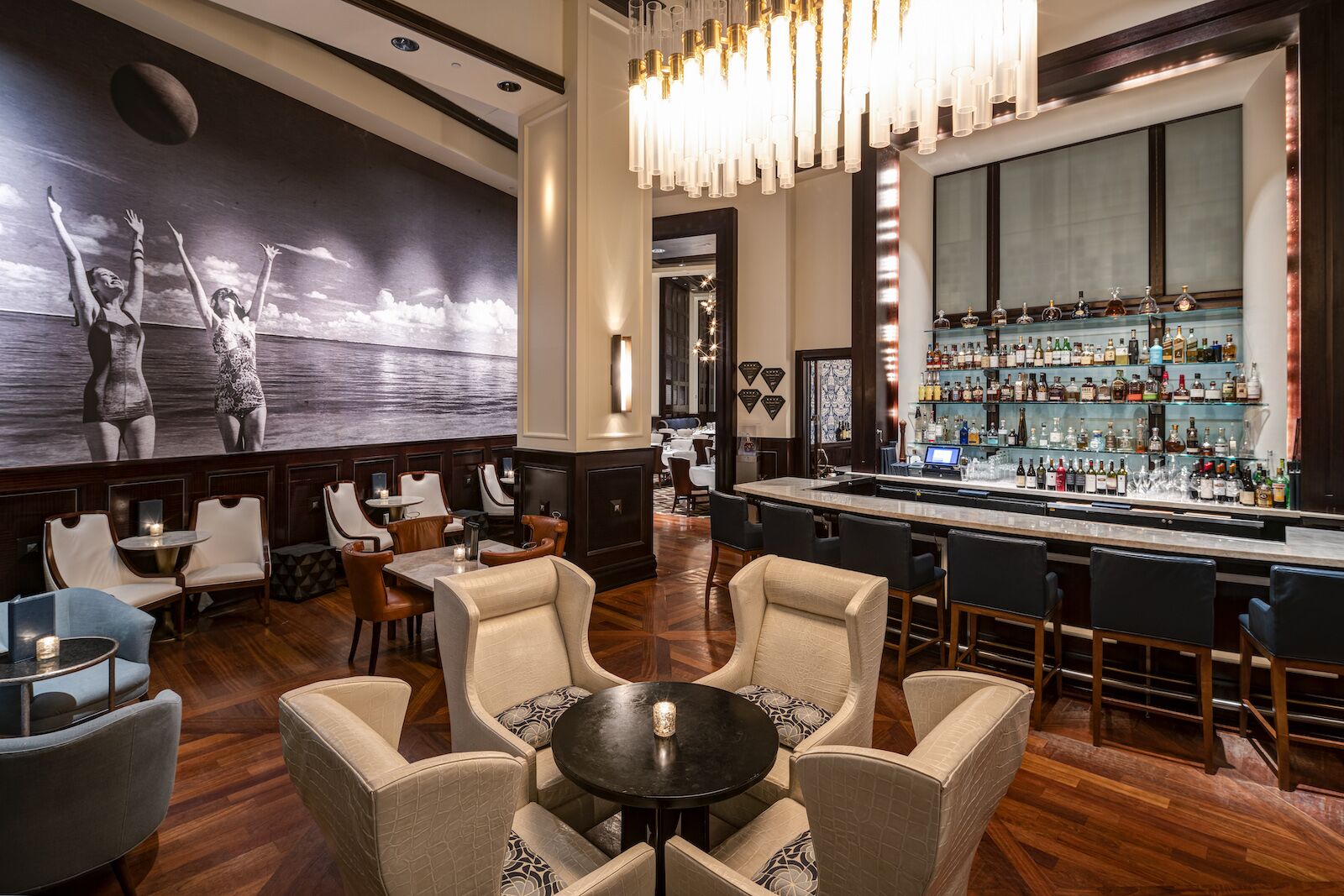 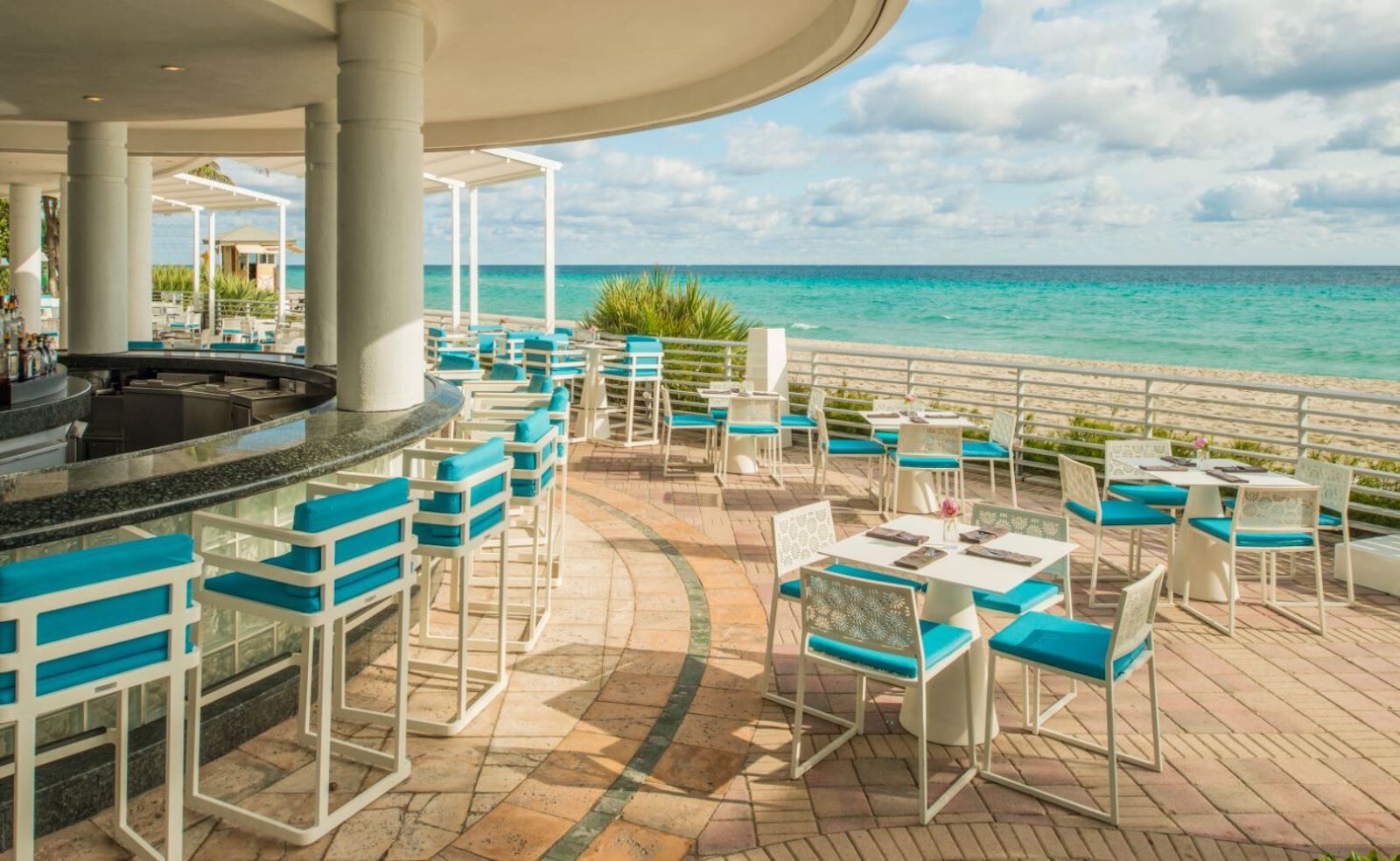 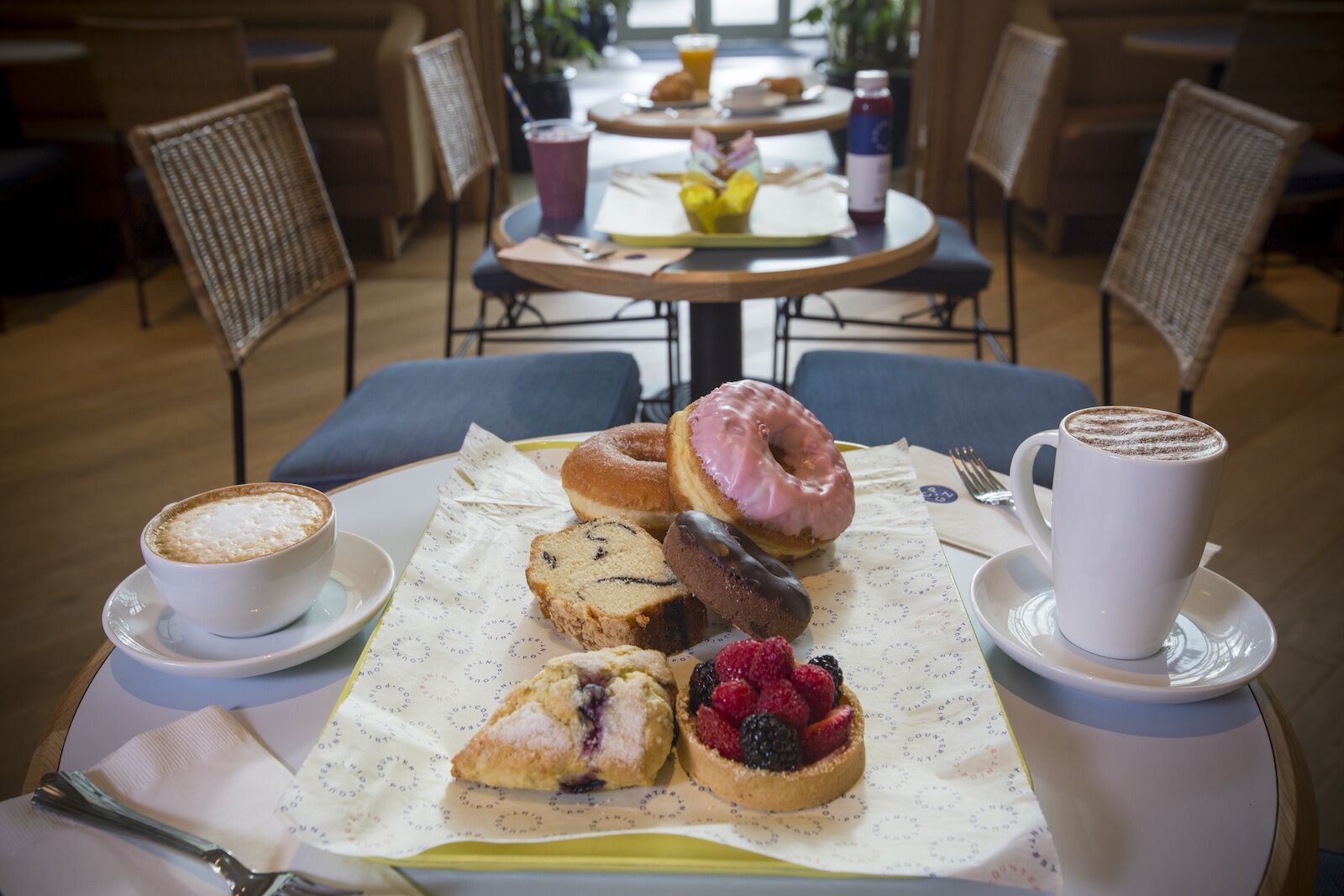 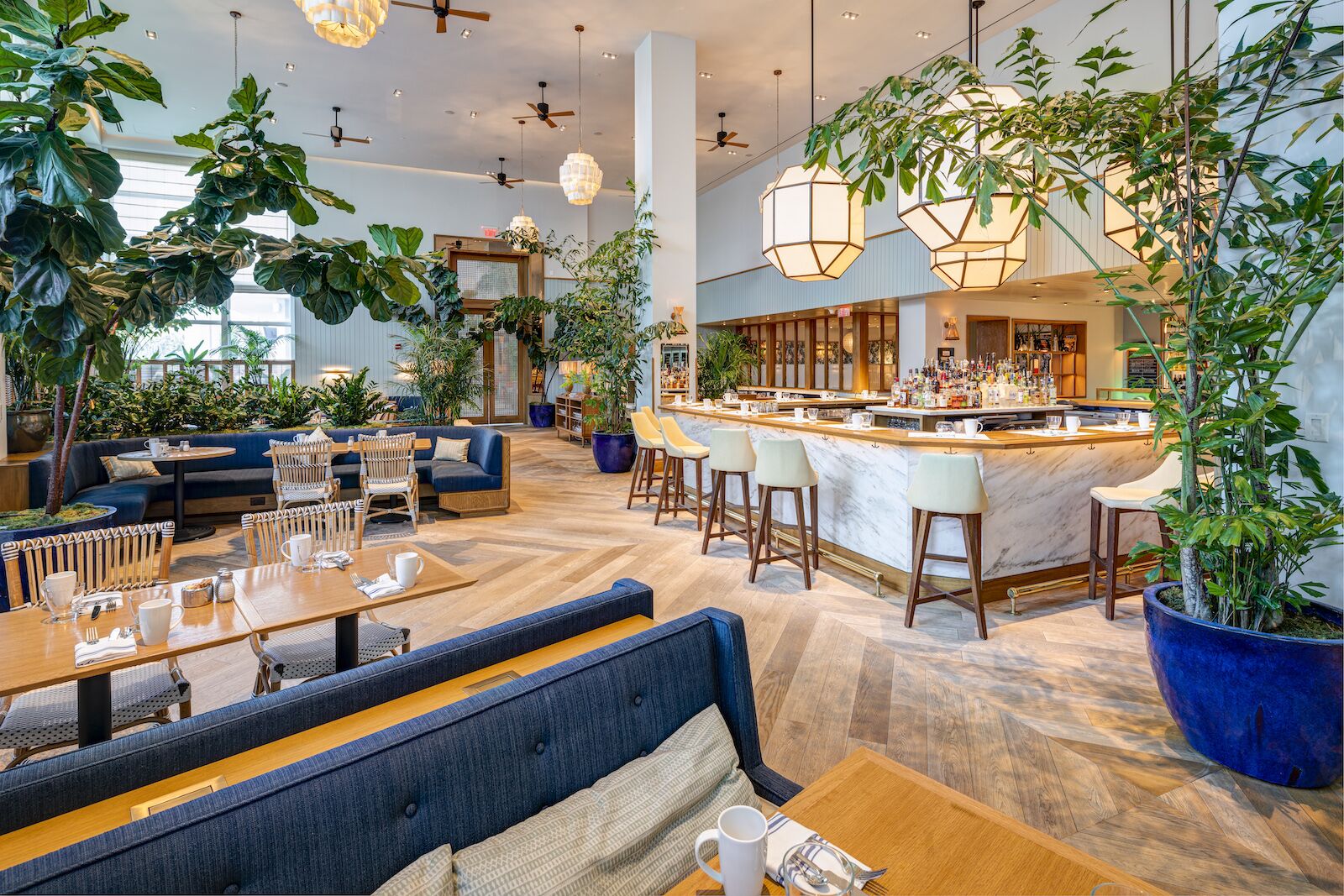 The Diplomat’s signature restaurant hides on the north end of the lobby at Diplomat Prime. The dark-wood steakhouse was recently redone in lighter tones, with white chairs and a mural of two 1940s actresses tossing a beach ball on a Florida beach dominating the bar. The menu is pure vacation splurge, where the smallest steak is a 10-ounce filet mignon with a $78 price tag.

If you’re looking for something truly worthy of a special occasion, try the wine-fed A5 Wagyu beef, the third-rarest cut of steak in the world. This herd of 2,200 cows is raised in Japan’s wine region and fed remnants from wine production to keep them drunk, fat, and happy.

For more casual stuff, there’s Playa out by the beach, whose menu of chicken tacos, burgers, salads, and sandwiches does the job when you’re hungry by the pool. It’s nothing remarkable but good enough for vacation.

The lobby coffee shop, Counterpoint, offers a selection of pastries made every day, which are the underrated gem of the hotel. Lines here can be interminably long and slow in the morning, though, and if you’re not dead-set on an iced vanilla latte with oat milk, you can get the same drip coffee and pastries at the grab-and-go market just across the lobby.

On weekends, and during high seasons, you can also eat breakfast at Point Royal, a full-service breakfast restaurant near the coffee shop’s back entrance. The food is elevated hotel breakfast fare, long on interesting omelettes, avocado toast, and fruit plates. But the wait to get in is often long, and the wait to get food is even longer.

Two gyms and a beachfront spa 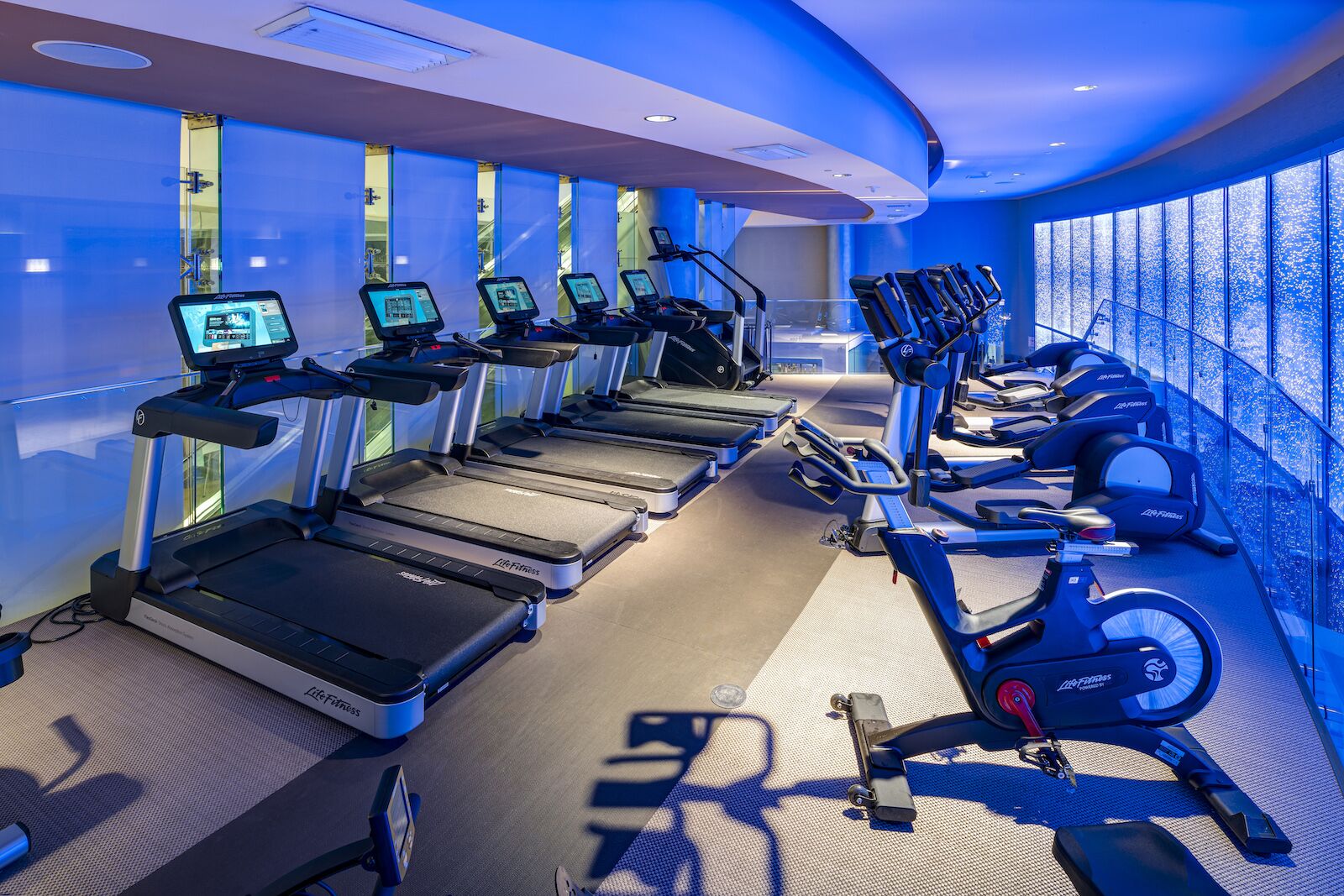 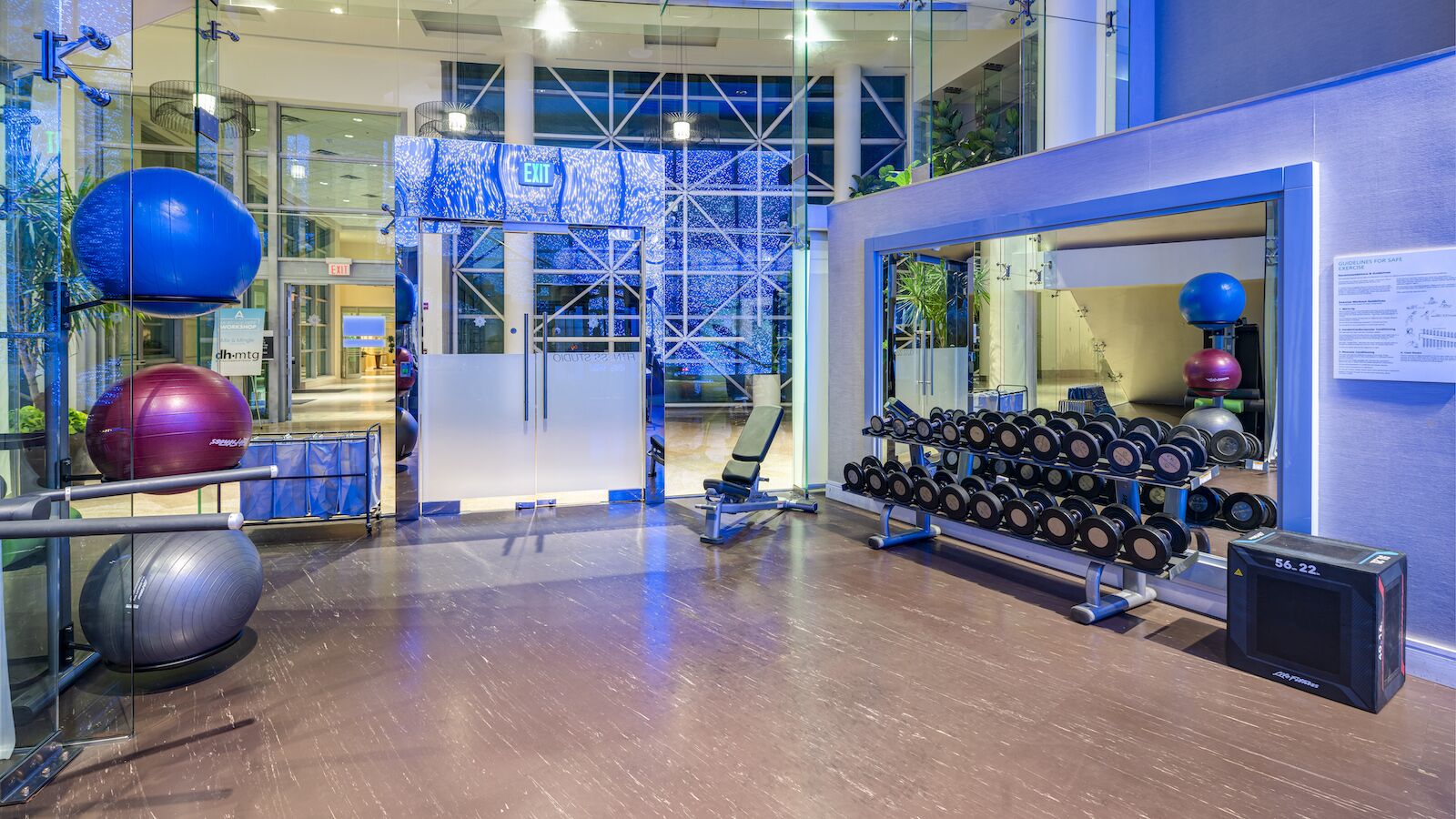 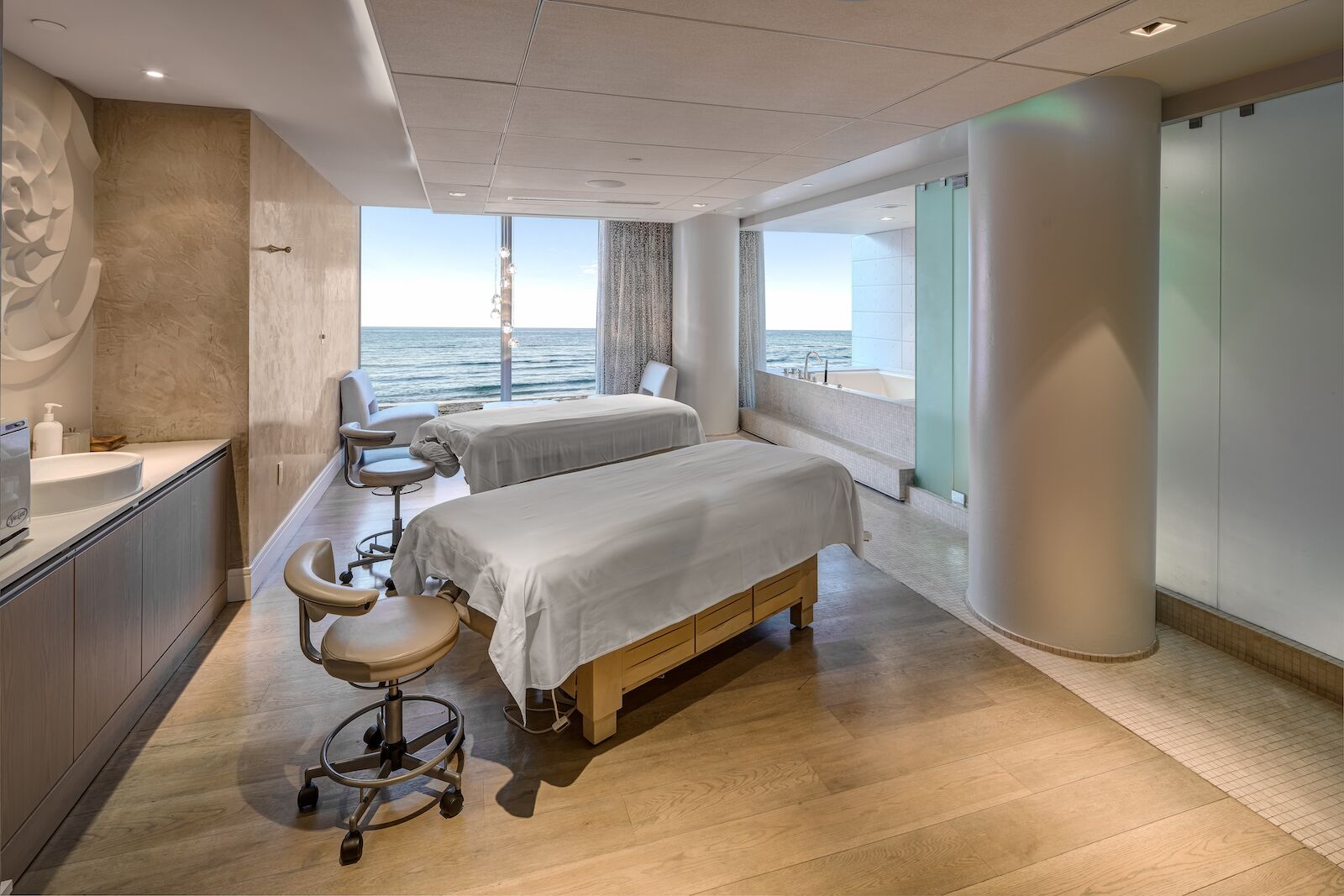 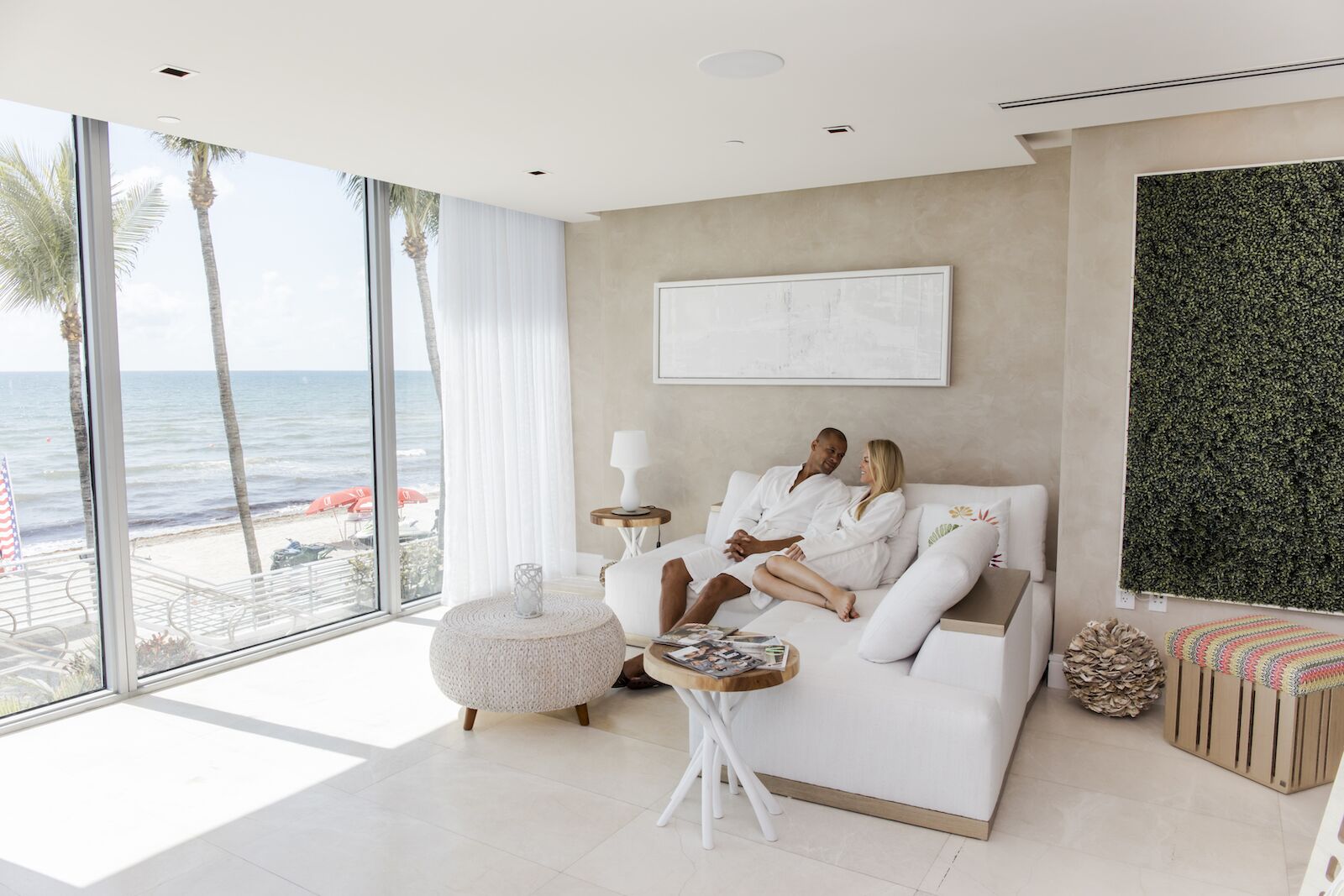 Though jogging on the Hollywood boardwalk is pretty easy from the Diplomat Beach Resort Hollywood (it’s less than a mile away), if you’re not up for running in the sun, the two-story fitness center is fantastic. It has all the treadmills, bikes, and ellipticals you’ll need, as well as a cross-cable machine, dumbbells up to 65 pounds, medicine balls, and circuit training machines. And, it’s open 24 hours.

If you prefer organized exercise classes, head across the bridge to Core Fitness Training at Diplomat Landing. It offers group HIIT and circuit training classes, with optional personal training sessions as well.

The spa is a 15,000-square-foot heaven on earth, just through a glass door by the dumbbells in the gym. It offers the standard sauna, steam rooms, and array of treatments one expects in a luxury hotel, as well as rainfall showers and a couples’ treatment room with floor-to-ceiling windows looking onto the beach.

For the money, there may not be a better beach resort in Florida than the Diplomat. You may not quite live like a star from the Golden Age of Hollywood, but you’ll certainly relax like one. While you’re standing on a private balcony overlooking the ocean, you’ll forget any of the other 999 rooms at the Diplomat exist. And your entire world will consist of the warm tropical breeze, and the surrounding towers that show just how far this once far-flung beach town has come.

8 of the Coolest Airbnbs Near Disney World, Orlando
Hurricane Ian Is so Strong It Pulled the Water Out of Tampa Bay
The Best All-Inclusive Resorts in Florida for a Worry-Free Beach Vacation
The Best Gayborhoods in Florida’s Major Cities
This Fort Lauderdale Hotel Rivals Anything in Miami for the Perfect Beach Vacation