The best steak in South Beach may well be served in a dog bowl.

Ok, maybe not the best steak, but certainly the best steak for the money. Sure, the six-ounce filet mignon comes chopped into little pieces, served atop some bland mashed potatoes, boiled veggies, and has no sauce. But go ahead and find another six-ounce filet for $16. You’ll have better luck finding a parking space.

What is this marvelous dining value in one of America’s most expensive destinations? Well, it’s part of the special dog menu served at Lobster Bar Sea Grille, a massive steak and seafood emporium with an outdoor patio where you can order up filet mignon and a number of other delicacies for your four-legged friend for a fraction of the human cost.

The dog menu — which also includes a beef short rib stew, meatballs and veggies, chicken chop-chop, and a veggie plate — is full of unseasoned meats and vegetables. They’re kind of devoid of flavor, too, but dogs don’t care. And so is kale, so neither should you.

“This is pretty good,” the older gentleman next to me at the bar said when I offered him some of the beef stew. He seemed initially hesitant to eat what was effectively dog food until the chef told him it was the same short rib they serve to people. “I’d definitely order this.”

“Could I order this?” I asked Lobster Bar’s chef de cuisine Allen Schumann. “Like without a dog?”

“It would be strange,” he answered. “That would be very odd.”

But it wasn’t a hard no.

We treat our dogs better than we treat people, so why not let them eat like us? 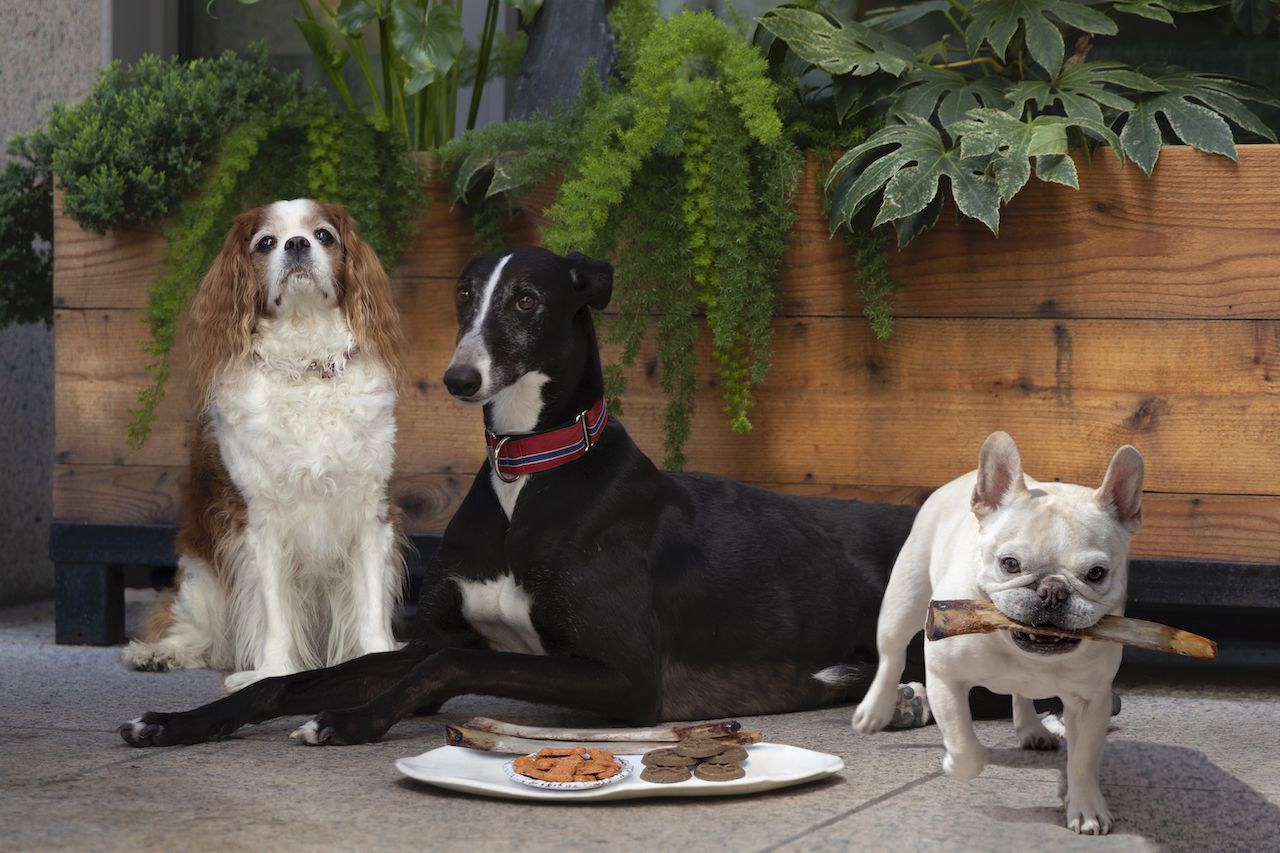 In the era of spoiling dogs to the point that we treat them better than we treat ourselves, restaurants like Lobster Bar have created menus with smaller portions, fewer extra ingredients, and lower prices than they offer to humans.

“What we’re doing is all straight proteins, no additives, with a little rice and veggies,” says Jason Phillips, the general manager of Nose Dive in Greenville, South Carolina. His description of the restaurant’s dog menu is almost verbatim what you might hear from a chef at a trendy “clean eating” establishment. At least until we got to the part where he said his entrees cost $3-8.

Miami and Greenville aren’t the only places serving healthy dog menus. Celebrity chef Michael Mina has gotten into the doggy-menu game, serving up a smoked beef bone and Doggie Moco (ground beef on top of white rice) at his barbecue-themed International Smoke. During brunch at 312 Chicago, your dog can feast on salmon and white rice with veggies for $7 while you down 312’s $22 steak and eggs.

Dogs even get to eat by the water without waterfront prices. Shooters Waterfront on the Intracoastal Waterway in Ft. Lauderdale has a dog menu with something called Bahia Beef, which is made with USDA-certified ground beef, whole wheat macaroni, butternut squash, organic carrots, apples, kale, organic pumpkin seed oil, organic hemp oil, and a blend of essential vitamins and minerals. I could not make up a more spa-menu-sounding entrée in my life, and this one’s only $14.

Even the heartland is in on the action, as Stella in Oklahoma City has a $12 tenderloin and eggs for dogs. I dare you to find a deal like that anywhere outside a buffet in Winnemucca.

Dog menus are for room service, too. 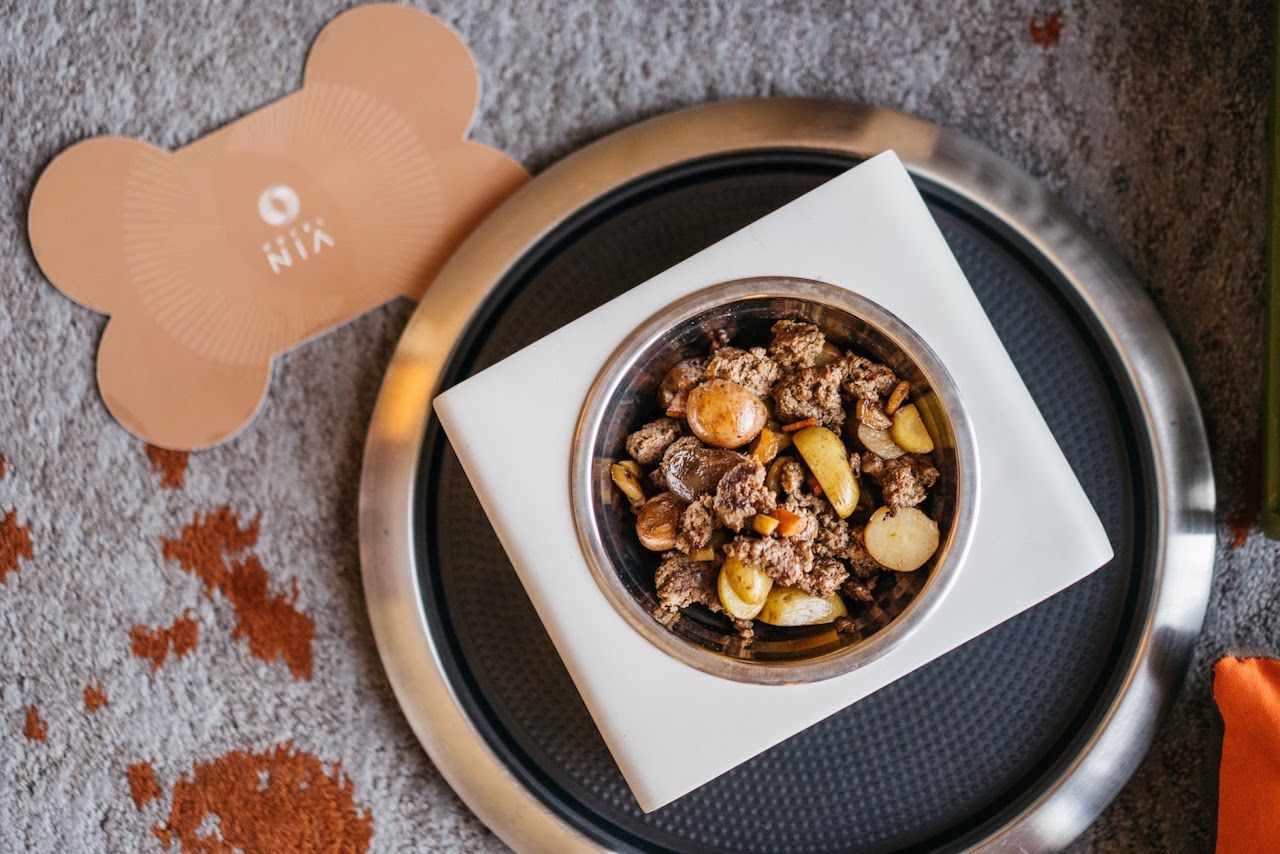 It’s not just restaurants catering chef-quality meals for your dog. You can also take advantage of these magnificent canine menus at a bunch of hotels across America, where there’s the added bonus of having the dog meals brought to your room like regular room service.

“We wanted to stay as close to the Northern California ethos of farming as we could, all-organic if possible,” says Julie Ramey, the director of sales and marketing the Hotel Nia in Silicon Valley, when describing the hotel’s in-room dog menu. Nia’s canine offerings include Glaum Ranch eggs with quinoa, cheddar cheese, and kale. Another option is Pitman Farms chicken with potatoes and broccolini. Those will run you $10 each.

A little farther south, the Fairmont Miramar in Santa Monica brings gourmet room service to dogs as part of its “Dog be With You” package. Matador‘s managing editor went there a while ago with her dog to try it out, and the pictures prove the experience was five stars all around, for everyone except the cleaning crew, probably.

At the Hilton Sedona at Bell Rock, after your dog is done getting its aura reading (this is an actual option in Sedona) it can get a burger topped with peanut butter and baked fries for $6.25. Or bacon and eggs for $5.75.

Am I seriously suggesting we all start showing up and ordering off the dog menu? No. (Maybe.) But these restaurant offerings are definitely a delicious way to spoil your dog while also ensuring they’re getting the same healthy nutrients you’d eat yourself. And if you steal a bite of steak off your dog’s plate out of curiosity, we certainly wouldn’t judge.