It’s no secret that airline food can vary greatly, from three-course meals prepared by a chef in first class to a pack of peanuts served in economy. What we eat in the air has a big impact on our flight experience. In the best case we’re left full and satiated, but if you choose (or are given) the wrong type of foods, you’ll be even more dehydrated, reduce circulation, and, to the pain of your fellow passengers, have flatulence.

Dante never could have imagined modern air travel, but I’m pretty sure sitting in the middle seat between two travelers passing gas for hours qualifies as one of the deepest circles of hell.

For the wellbeing of yourself and your co-travelers, eat right and follow this guide on what food you should avoid eating before, during, and after your flight.

What to eat before flying

The digestive battle begins long before boarding. Watching what you eat prior to a flight can make all the difference in how comfortable you are during your trip.

Physician and travel blogger Nadeen White tells Matador that “gassy foods are either high in soluble fiber or contain certain types of sugars.” Examples include beans, broccoli, cauliflower, peas, plums, oranges, apricots, and dried fruits like raisins and prunes. White also notes that “due to the reduction of the enzyme lactase as we age, adults may find lactose in dairy products will cause bloating and gas. If so, avoid milk, ice cream, cream cheese, and heavy cream before a flight.”

What to eat and drink while flying

You’re thirsty, security made you throw out your water bottle, and the only thing coming around on the drink cart is coffee and tea. To make matters worse, you’re already extremely dehydrated from your flight. Despite studies questioning the level of bacteria in water tanks on a plane, Mia Herman, flight attendant and travel blogger at Travel with Mia, tells Matador it’s safe. “I’ve been drinking [the water] for 10 years and I’ve never gotten sick,” she says. “If you drink coffee or tea on an airplane, you’re drinking water from a tank. If you’re worried, stick to bottled water, juices, or sodas.”

Flight attendant Astrid Quiles Camacho seconds that, stating, “I drink that [tank] water almost every day with my coffee and tea and I’m still alive.”

The food on board is a different story. As a frequent flyer of budget airlines, I’m troubled by the snacks sometimes served on planes, such as pizza pockets or other food heated in its wrapping; studies show that heating plastic in this manner can cause harmful chemicals to leak directly onto the food, particularly with fatty food such as meats and cheeses. 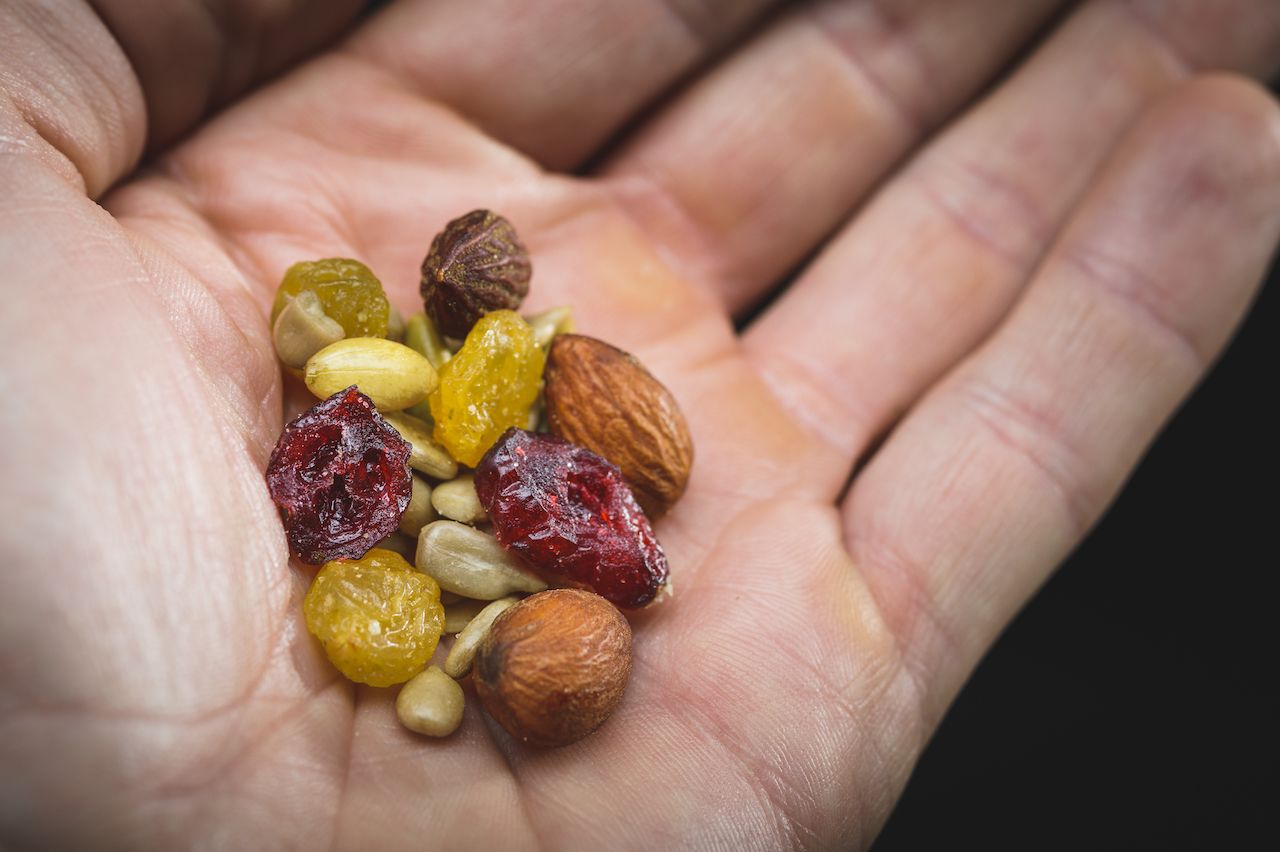 Those feeling uncertain about the food and beverage items provided on board would be better served by bringing their own. Solid foods can pass through airport security without issue, though you do have to bring limited quantities of creamy spreads like hummus, peanut butter, or jam. Nutritionist Sally Pansing Kravich recommends that you “keep it light. Bring portable foods with you, such as fruit, veggies, and raw nuts.”

Water and other beverages can be purchased at the terminal before boarding, or you can refill a reusable water bottle once you pass security.

Best food to recover from a long flight

Drinking plenty of water can reduce jet lag and help you acclimate quicker to new destinations. It also helps if you indulged in a drink or two. Alcohol hits you harder in the air due to the lack of oxygen and dry atmosphere in flight, and you pay for it with a meaner hangover. As such, staying hydrated is crucial.

Upon landing, Caleb Backe, a health and wellness expert with Maple Holistics, suggests that you “plan where you will be eating ahead of time so that you don’t find yourself starving and winding up at the nearest fast food joint. If you’re able to stay somewhere with a kitchen that’s ideal, but if not, look up farmers markets nearby, as well as clean restaurants in the area to make sure you’ve got healthy options around you.”

Avoid any afternoon caffeine when you land. It’ll be easier to adjust to the local time and schedule without the 4:00 PM espresso when you land. Instead, go for fresh fruit full of fiber and antioxidants.

WellnessWhy You Get Dehydrated on a Flight and How To Prevent It
Tagged
Airports + Flying Food + Drink Lifestyle Trip Planning Wellness
What did you think of this story?
Meh
Good
Awesome

What You Should Know Before Getting a Chinese Massage in Beijing