A few years ago, Prince Harry visited the glorious country of Kazakhstan to hit the slopes of the Shymbulak ski resort. The entire resort was shut down for his privacy. The Prince and his entourage had the mountains all to themselves. This March, I undertook the same trip and, surprisingly, was provided with the same royal treatment. Empty ski runs, deserted chair lifts, and the distinct lack of snow-ploughing conga lines of snaking ski schools made it one of the best ski trips I’ve ever done. I could easily enjoy the resort on a backpacker’s budget whilst travelling through the Stans. Cheap flights from Europe also makes Shymbulak an affordable and accessible destination for winter skiing holidays. The ski season in Kazakhstan runs from December to April. 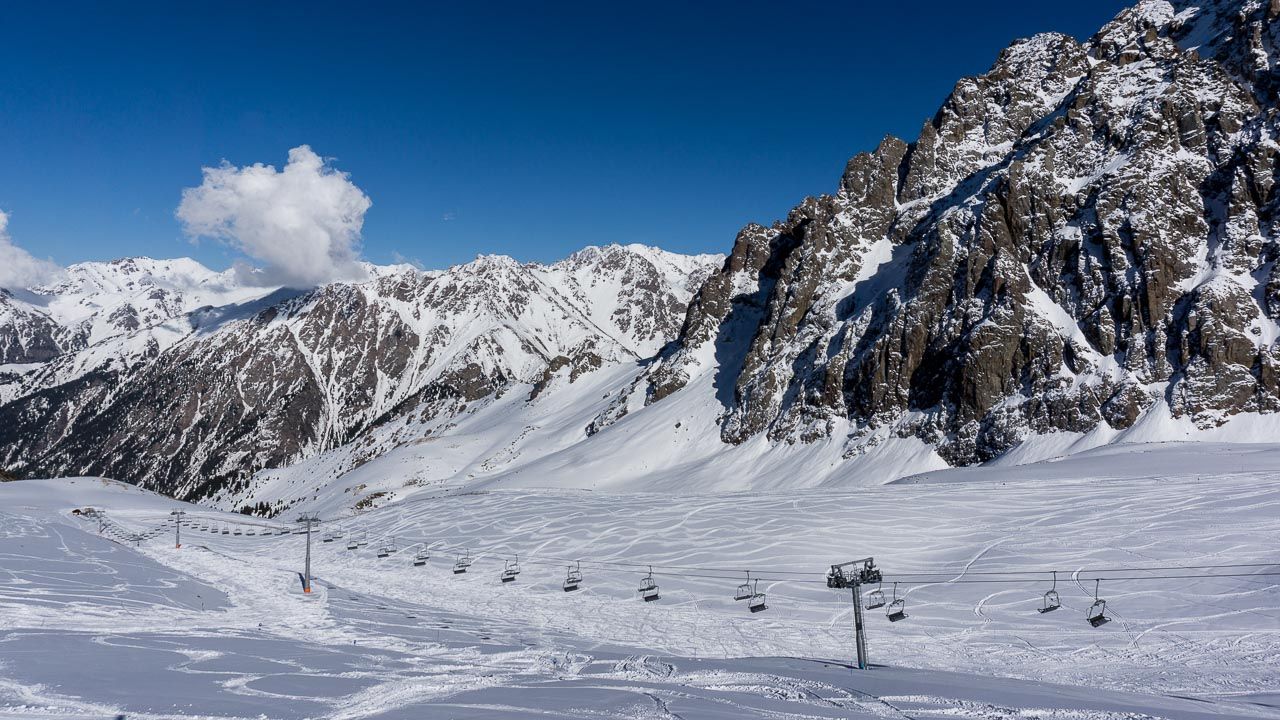 The mountain to myself.

Shymbulak ski resort is located in the Medeu Valley of the Zailiyskiy Alatau mountain range. It is the northernmost section of Central Asia’s Tian Shan mountain system. The resort is only a ten-minute bus ride from Kazakhstan’s former capital and largest city, Almaty. During the Soviet times, Shymbulak hosted a number of USSR Winter Games and became known as the home training ground for Soviet Olympians. It remained a charming run-down Soviet skiing destination up until 10 years ago when the infrastructure received heavy investment from the Kazakh Government and Turkish property developers.

Shymbulak is by far the most modern and largest ski resort in Central Asia and mainly attracts Russians and Royals to its slopes. This year Almaty hosted the Winter Universaide Games. Shymbulak basked in the international spotlight and the resort received another capital injection. Access to the resort is easy, courtesy of the world’s third largest gondola. Once at the summit, visitors can enjoy ski runs descending from 3200 metres. In total, there are eight pistes stretching 15km (9 miles). This makes Shymbulak smaller in comparison to the well known skiing destinations of Europe and the US but the wide empty slopes are a utopia for beginners, as well as those who enjoy a leisurely ski. There are no lift queues, no crowds, and certainly not an irate Frenchman in sight (the kind who tend to jab a ski pole into my back when I edge through the lift queues). 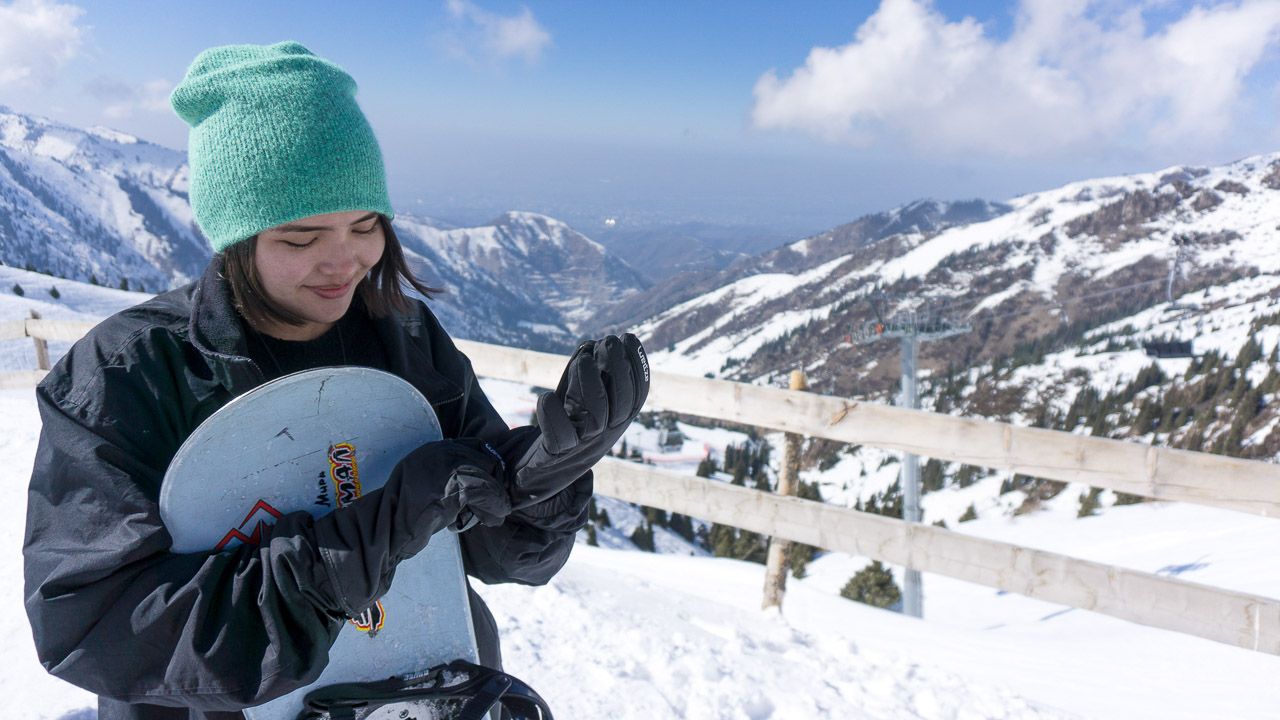 Many options to get into the backcountry.

The true potential of the Almaty mountains lies off-piste. The geography of Shymbulak is unrestricted and there are a few good vertical descents off-piste which are accessible. When you reach the summit you’re free to explore the surrounding ridges by foot, choose a line and fly down the face of the mountain. Alternatively, there are tour companies in Almaty offering heli-skiing packages. Prices are not cheap but they are significantly lower in comparison to Europe and the US. The conditions were glorious: the sun shined down whilst I glided through the untouched powder just metres from the piste. There really was no need for thermal layers, gloves, hat, or the coat that I had packed with me. Shymbulak enjoys a mild year round climate as the southern mountains of Kazakhstan face towards the open steppe meaning prolonged exposure to the sun’s rays. 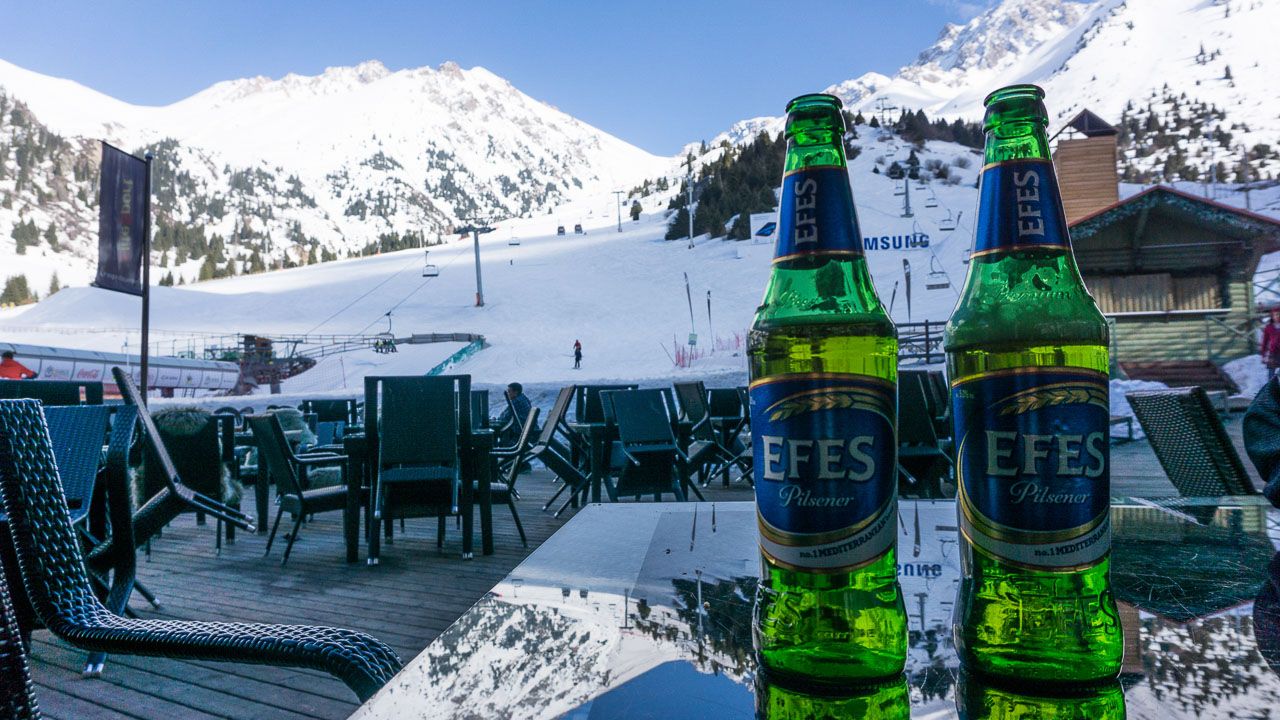 The surrounding views are stunning. It’s quite different to the Alpine ski resorts of Europe –looking out over the Kazakh steppe, the shades of sky change from light to a deep rich blue. The contrast between the endless flat steppe and the Zailiyskiy Alatau mountain range instilled a sense of awe in me that almost caused me to crash on a number of occasions. Unlike many other ski resorts in Central Asia, Shymbulak has all the modern facilities needed to ensure a smooth winter holiday: rental shops, terraced bars, restaurants, Alpine chalets, novice areas, a snow park, and artificial snow machines. Millions have been spent improving these facilities.

If you’re a beginner, or just out of practice, you can even find English-speaking ski instructors. You can rent everything you need up the mountain, but naturally, the cost is higher there. For those on a shoestring budget, I suggest renting from one of the many ski shops in Almaty city. The same rule applies for accommodation. Prices are much cheaper down in the city and you can find a hostel bed for as little as £3 a night. Almaty is a lively city and you won’t have to look hard to find good apres-ski. After a day’s worth of skiing, kick back with a beer and find a Shashlik BBQ joint (skewered meat never disappoints). When you’ve had your fill, head back up the mountain for a night ski session. Night skiing takes place twice a week from 7-11pm. 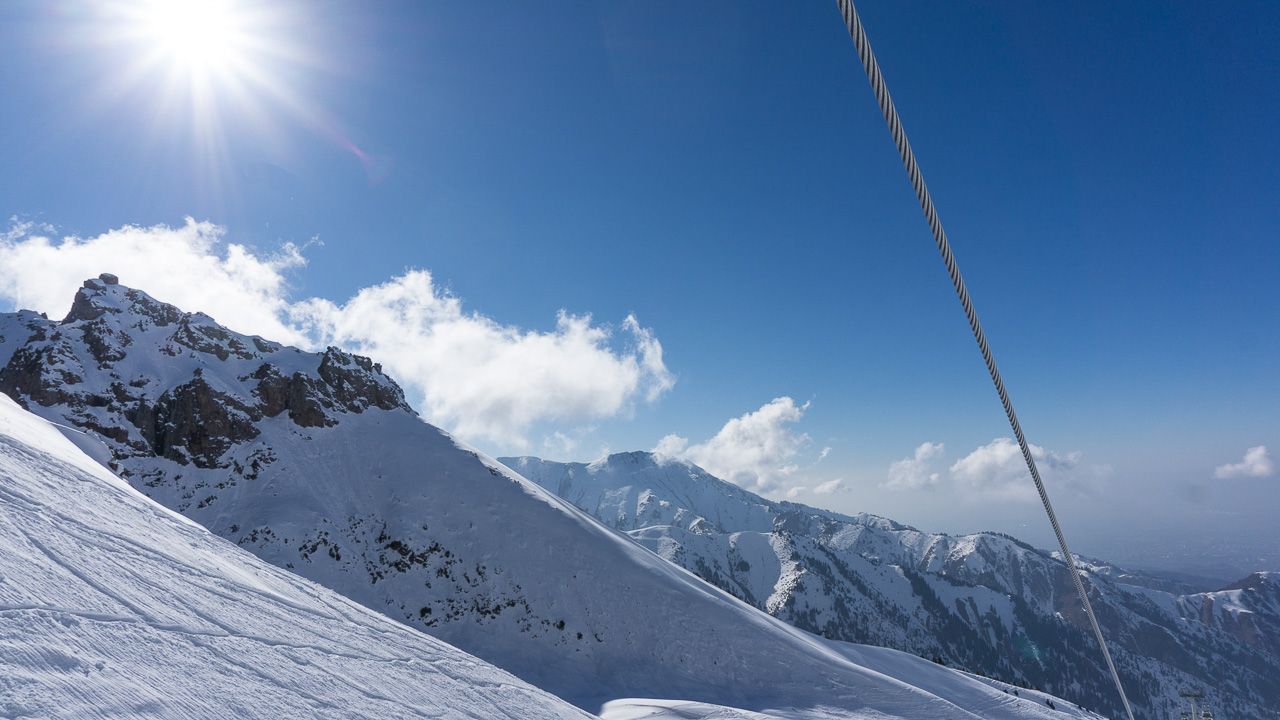 Kazakhstan is definitely not your typical winter skiing destination but it has all the facilities to classify it so. The Russians kept Almaty a secret during the Soviet times but in recent years, Kazakhstan and other Central Asian states have opened up their doors to tourism. The natural geography of the region provides a haven for thrill-seekers and the low costs make it attractive to the backpacker community. Almaty is leading the way for both resort and backcountry skiing, making it the skiing world’s best-kept secret.

Shymbulak ski resort extends from the former Kazakh capital, Almaty. The city is usually a first stop for travellers entering the country from neighbouring southern countries: Kyrgyzstan and China. Almaty airport connects both domestic and international flights. If you arrive in the newly built capital Astana (590 miles to the North of Almaty) there are daily flights and trains between the two cities. I boarded the overnight train in Astana and arrived in Almaty the following evening. A third class ticket will set you back around £12. The number 12 bus runs from Almaty Kalenina to Medou (the gondola station) every 10 minutes.

Alternatively, you can flag down any vehicle and they will take you for a price. Every car in Kazakhstan is an unofficial taxi. Do not pay more than 1500 tenge from Abay district. 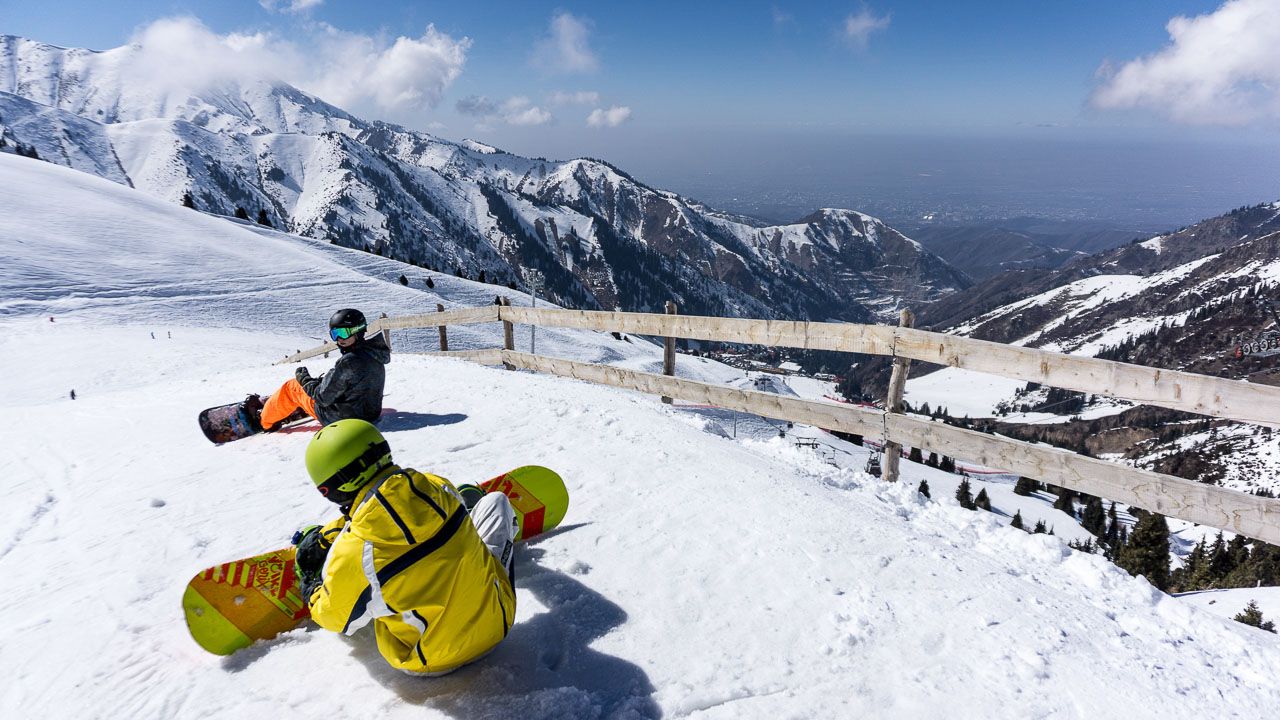 Cost (for one day)

Lost in a skier's dream
Tagged
Ski & Snow Kazakhstan
What did you think of this story?
Meh
Good
Awesome

An Ice Volcano Is Spewing Steam in Kazakhstan

This Time Around, Kazakhstan Is Actually Embracing Borat

Kazakhstan’s Capital Is Getting Renamed After Its Former President

How To Catch a Street Taxi in Astana, Kazakhstan