On any given Saturday in San Francisco, a line is likely to form on Geary Boulevard outside the Urbana dispensary. Customers flood in with their 24-ounce Hydro Flasks, the accessory of choice for many city residents, and filter out now carrying up to an ounce of cannabis.

San Francisco is undeniably green, ranking high on lists of both environmentally conscious and cannabis enthusiastic cities in the United States. Yet to wear both badges proudly reveals a contradiction in the city’s values: Cannabis cultivation spawns a sizable carbon footprint.

A single mature plant requires roughly six gallons of water per day, or 32 refills of a 24-ounce reusable bottle. Per square mile of greenhouse-grown cannabis, that amounts to approximately 1.2 billion liters required throughout the growing season, according to a study in BioScience. Compare that to wine grapes, another of northern California’s beloved plants: A mature grapevine uses roughly half the amount of water as cannabis.

Unlike grapes, cannabis is grown both indoors and outdoors. Plants cultivated indoors, which generally yield more potent and expensive cannabis flowers, demand special lighting and other energy-sucking equipment like heaters and humidifiers. According to the Pacific Gas & Electric Company, indoor growing facilities are “considered to be equivalent to other energy-intensive operations such as data centers.”

Growing cannabis accounts for one percent of the total electricity used in the US and three percent in California. Altogether, one gram of indoor-grown cannabis produces approximately 10 pounds of CO2 emissions. A six-pack of beer emits seven.

Sun-grown plants ease the burden on the grid but introduce their own environmental stressors. Water is often diverted unnaturally from streams, drying up watersheds and threatening wildlife. In California, this includes vulnerable species such as coho salmon and steelhead trout.

A state that has historically struggled with drought, California experiences the greatest effects of cultivation as the largest cannabis producer in the United States. It grows an estimated 70 percent of the nation’s cannabis, with the northern California counties of Mendocino, Humboldt, and Trinity, which are together known as the Emerald Triangle, hosting the highest density of cannabis operations anywhere in the country, legal or otherwise. 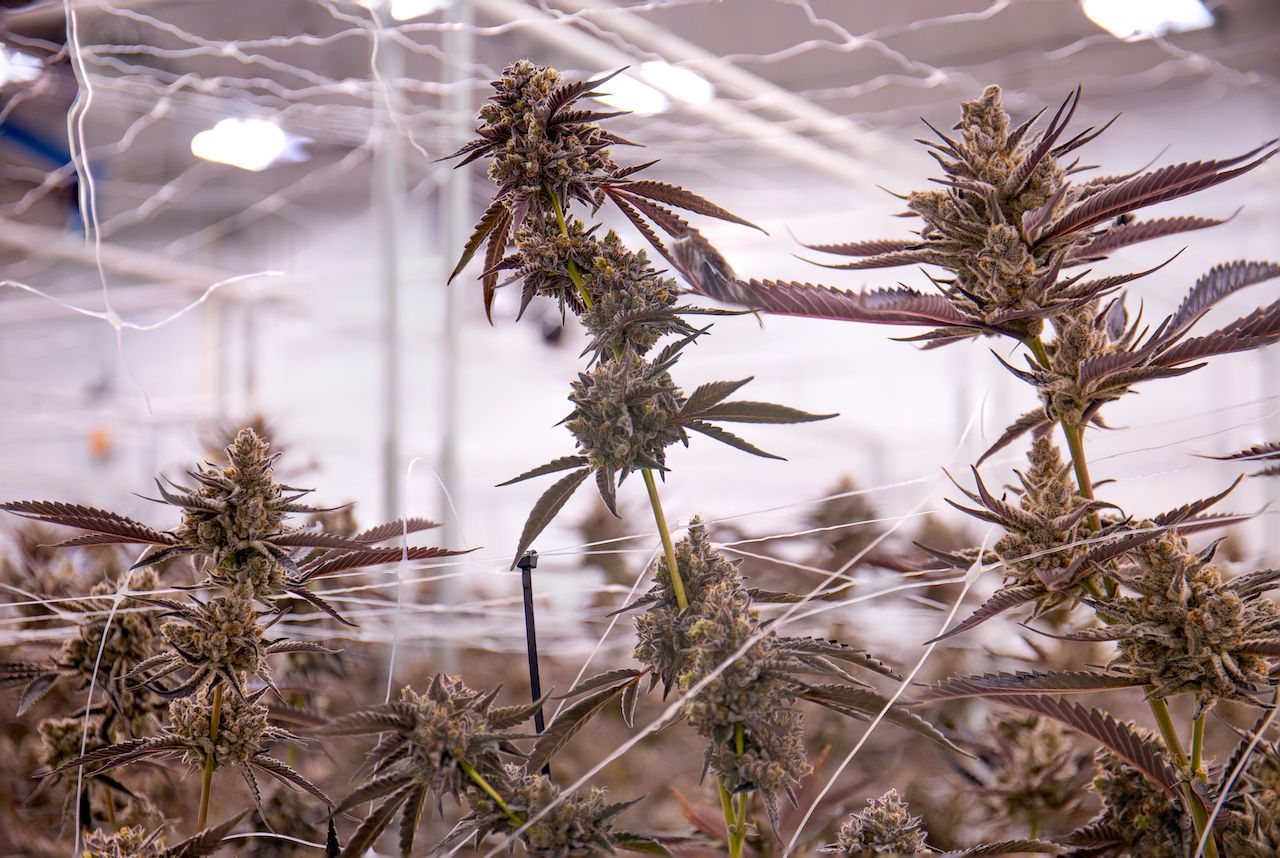 Legalization has benefited the environment. Illegal operations put greater strain on public land and jeopardize ecosystems with harmful toxins and cultivation techniques. In northern California, many illicit grow sites are established in and degrade national forests while commercial outfits are required to adhere to regulations set by the state’s Department of Fish and Wildlife, Water Boards, and Department of Food and Agriculture’s CalCannabis division.

Proposition 64, which legalized recreational cannabis use in the state in 2016, allocates 20 percent of the industry’s tax revenue to addressing the environmental impact of the crop.

Yet with commercial cannabis comes commercial consumerism. As the industry has grown, so too has the number of products hitting dispensary shelves, all of which are subject to marketing tactics and regulations like child-proofing that can create excessive waste.

Tyler, a budtender from the Grass Roots dispensary in San Francisco, identifies packaging as the least green aspect of the cannabis industry at present. “Some companies recycle,” he says, adding that sustainability is a goal for many involved on the production side, “but it’s far and few between because most of the time they want it to be single-use.”

Employees of The Green Cross in San Francisco agree, with one budtender I spoke to noting that excessive packaging seemed to be an occasional concern for consumers. Of the seven dispensaries that I polled, however, employees of only two could recall hearing comments about the sustainability of a product’s packaging while none could remember otherwise being questioned about the environmental impact of certain brands or products over others.

Cannabis users in San Francisco have a modest advantage when it comes to consuming responsibly. Not only is legal cannabis easy to come by, but the majority of the city’s flower is also grown locally. By default, a significant percentage comes from Humboldt County where “you have a lot of that all-natural, outdoor, greenhouse environment,” says Tyler.

Yet even some companies with wider distribution are doing their part to make cannabis greener. Recyclable, compostable, paper-based Sun Grown Packaging and hemp-based Sana Packaging have built their brands on reducing plastic waste. Sun Grown has partnered with boutique cultivators like Gold Seal San Francisco to offer eco-friendlier pre-rolls and other products while Bay Area favorite NUG teamed up with One Tree Planted to help fight deforestation in California by pledging to plant a tree for every product purchased.

On the cultivation side, some growers have implemented irrigation and filtration systems that allow water to be recycled, or established other environmentally conscious practices. Dispensaries, at least in San Francisco, vary in their commitment to supporting small farms, sourcing as locally as possible, and stocking outdoor or greenhouse-grown and Clean Green-certified products.

Creating a more environmentally friendly cannabis industry will largely fall on producers and businesses. Yet, though the industry’s current model is far from sustainable, cannabis, like any other consumer good, can be enjoyed conscientiously.

As much as shoppers, particularly those in cities like San Francisco, are increasingly aware of the clothing, food, and other brands they support, cannabis buyers can do their due diligence before hitting the dispensary. As much as consumers are increasingly committed to reducing, reusing, and recycling the products that they purchase, cannabis enthusiasts can apply those same principles to this marijuana-based pastime.

As with any sustainability effort, starting small is better than not starting at all: Buy a hemp wick. Get rechargeable batteries for your vape. Stick to flowers that come in glass, not plastic, containers, then start a succulent garden when they’re empty.

No matter how you choose to start being greener, what matters most is that you start now.

CannabisCannabis regions should get the same recognition as wine regions. Here’s why.
Tagged
Sustainability Cannabis
What did you think of this story?
Meh
Good
Awesome

Where to find your favorite celebrity cannabis brands