Sand bathing is a centuries-old wellness practice that hails from the geothermal beaches of southern Japan. In recent years, this therapy has gained popularity for its ailment-relieving effects (improved circulation, joint pain relief, and reducing inflammation) and the extraordinarily unique experience of being buried in volcanic sand.

To experience an authentic Japanese sand bath, travelers need not flock to the shores of Ibusuki but instead to Edgewater, New Jersey, a quiet New York City-facing locale that hides the tri-state area’s best-kept wellness secret: SoJo Spa Club.

Editor’s Note: Please consult a doctor before partaking in spa treatments if you have pre-existing medical conditions. 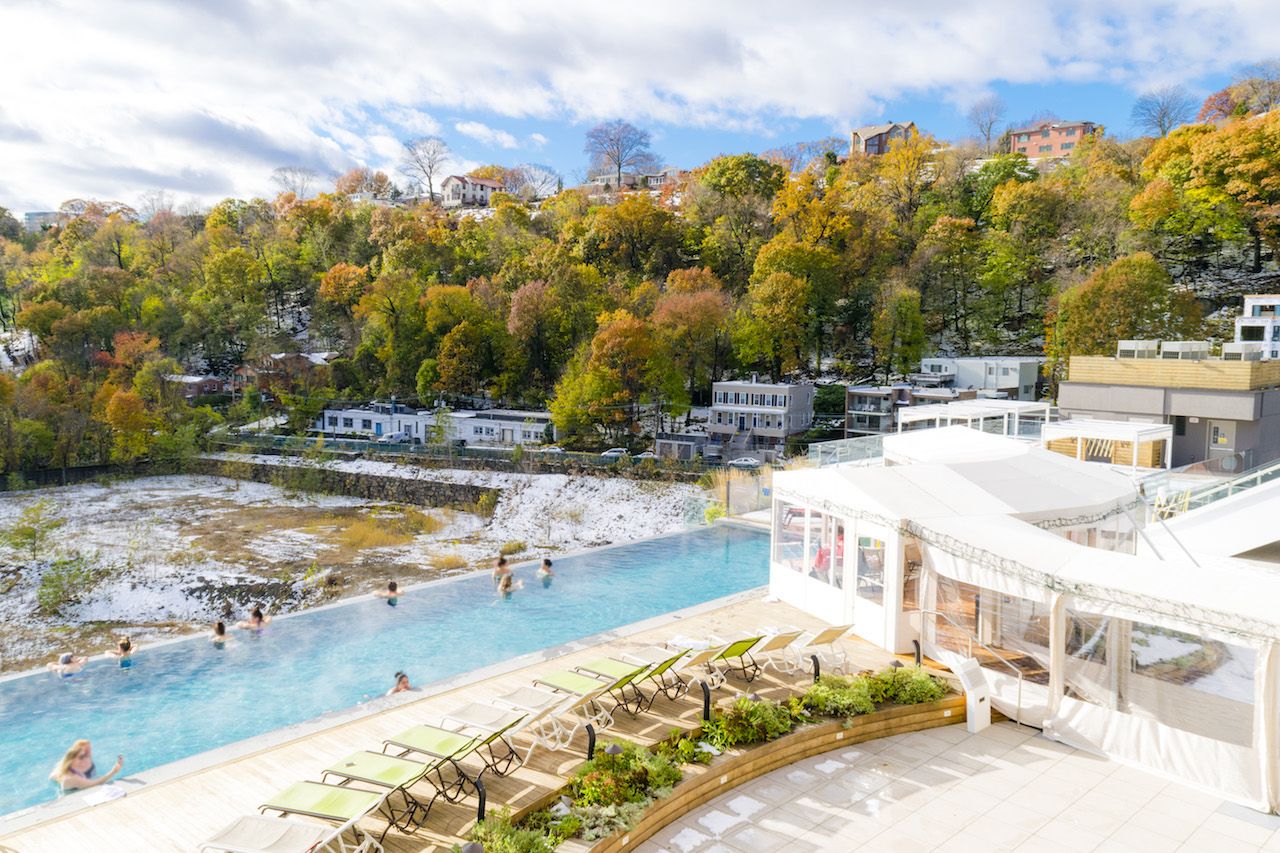 SoJo Spa Club is a seven-floor wellness facility with pretty spectacular views of the New York City skyline. Roughly longitudinal with 130th Street, the spa’s many levels provide a lesser-seen perspective of Manhattan; people are more accustomed to seeing eastside views of the skyline from Brooklyn, not the westward view afforded by Edgewater.

In the vein of the Korean bathhouse culture to which the compound subscribes, SoJo Spa Club follows a no-shoes, robe-only ethos. Upon entering, you’ll be asked to store your footwear in a locker that, once closed, will disconnect a bracelet that becomes your ID badge for the rest of the day. 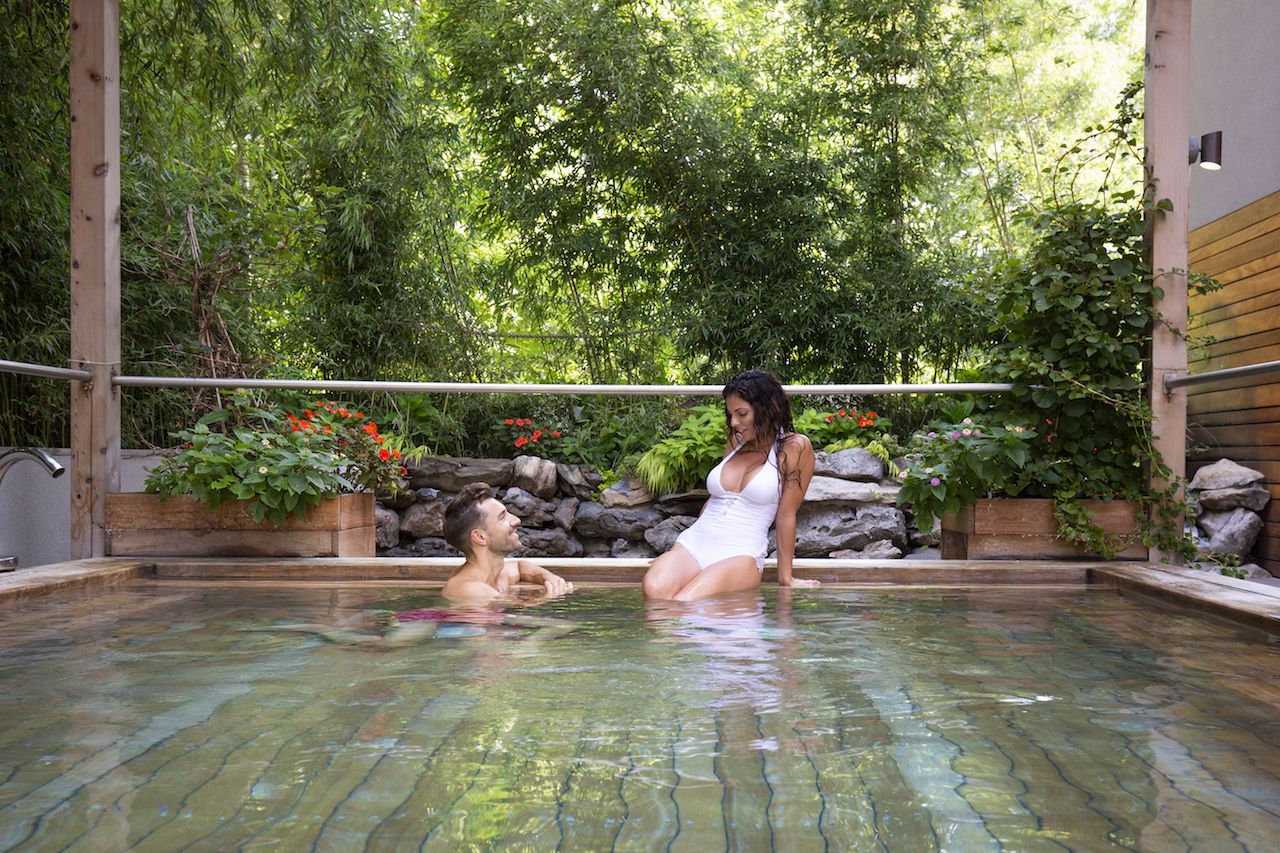 There are seven outdoor pools, each designed with a specific purpose and to yield specific benefits — every treatment option at SoJo Spa Club is labeled with corresponding health perks. There’s a silk bath, filled with ionized water to nourish body tissue and leave your skin feeling smooth and sleek; a carbon-rich bath, creating a feeling akin to swimming in a can of LaCroix; a Hinoki bath, exuding a subtle lemony fragrance from the foundational cedarwood, which is antibacterial in nature; and a rooftop infinity pool, with fewer intrinsic benefits but perfect for the requisite Instagram moments (though technically, phones aren’t allowed in this specific pool). There are also baths scattered throughout the men’s and women’s locker rooms, from icy plunge pools to secluded hot tubs, hidden from view by foliage-filled dividers.

SoJo maintains a collection of healing saunas and “therapy rooms” — a far-infrared sauna provides the positives of natural sunlight without causing UV damage; the charcoal sauna works to eliminate heavy metals and toxins from the body; and the Ganbanyoku room, where visitors lay on heated tiles to recreate Japanese hot stone therapy. The Himalayan salt sauna, like the lamp, is a golden-pink room constructed of salt bricks (naturally purifying the air) that is set to a lower temperature than the other saunas, with the goal of detoxifying the body by discharging waste in the capillary vessels and, simultaneously, ground visitors spiritually. And on a hot summer day, or following five consecutive sauna visits, the ice room is a cool refrigerator-esque refuge. 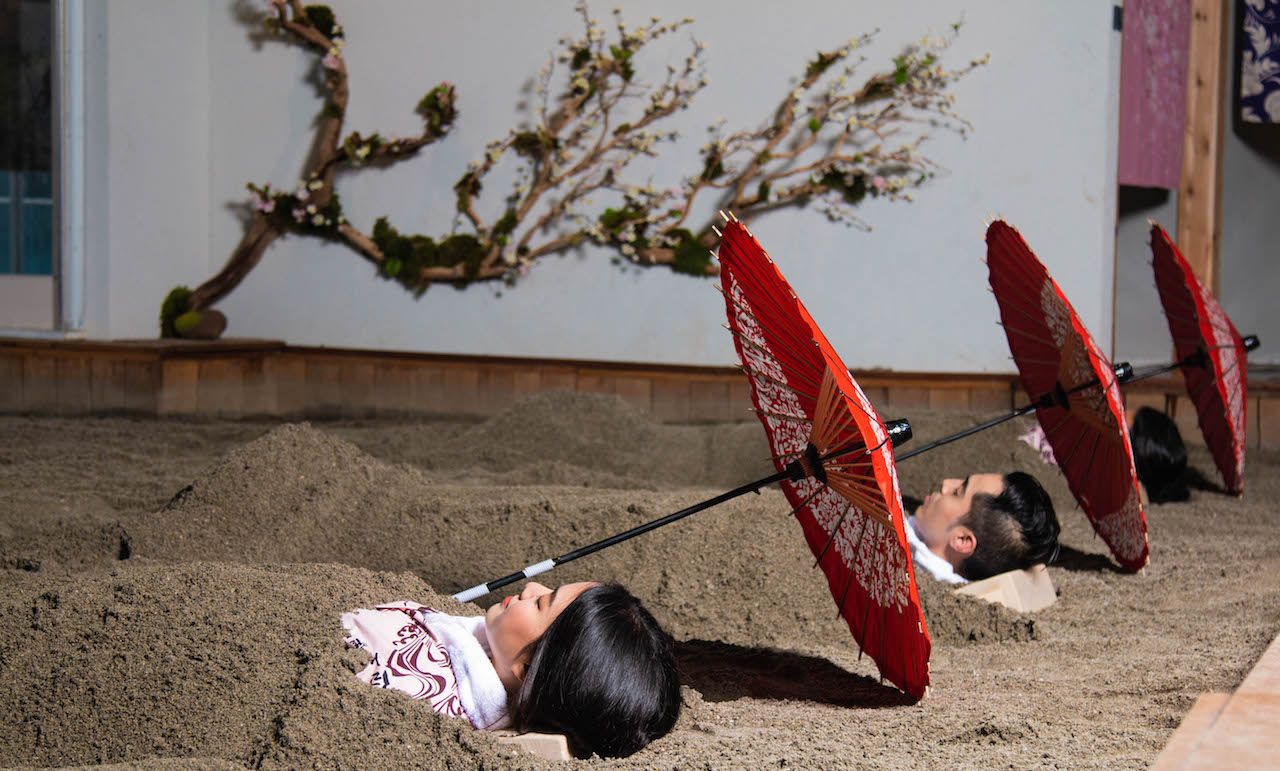 The true pièce de résistance of SoJo Spa Club aside from the above-listed amenities is the Japanese sand bathing. The spa is the only place in the US to offer this treatment authentically — over 120 tons of volcanic sand were imported to Edgewater from Ibusuki.

Ibusuki is an onsen (hot spring) town encompassing the southern portion of the Satsuma Peninsula, one of Japan’s southernmost points. The tradition of sand bathing is believed to have originated over 300 years ago in this region, which is a hotbed of geothermal activity — its popularity transformed the volcanic shoreline into a pilgrimage for medical relief-seekers. Many of Ibusuki’s hotels offer this treatment — including Hakusuikan, SoJo’s partner hotel.

Aside from the sand’s genuine Japanese origins, SoJo’s approach to sand bathing is on an echelon above other US spas providing these therapies — SoJo’s experience is one in which guests are bathed in a group, as is tradition, instead of in single tables. These communal sand baths are located on SoJo’s sixth floor in a 1,200-square-foot wooden sand bath. Prior to bathing, you’ll discard your snowy-white SoJo garments and don a traditional Japanese yukata, a salmon-pink robe embroidered with brown tree patterns and Japenese characters, complete with a towel wrapped around your neck for protection from the hot sand.

To start the treatment, you’ll lay down in the volcanic sand and place your head on a wooden block — as the volcanic descriptor implies, the sand is hot, heated to 130 degrees, and is not the tan-white variety found at many American beaches but instead is coarse, charcoal-gray. 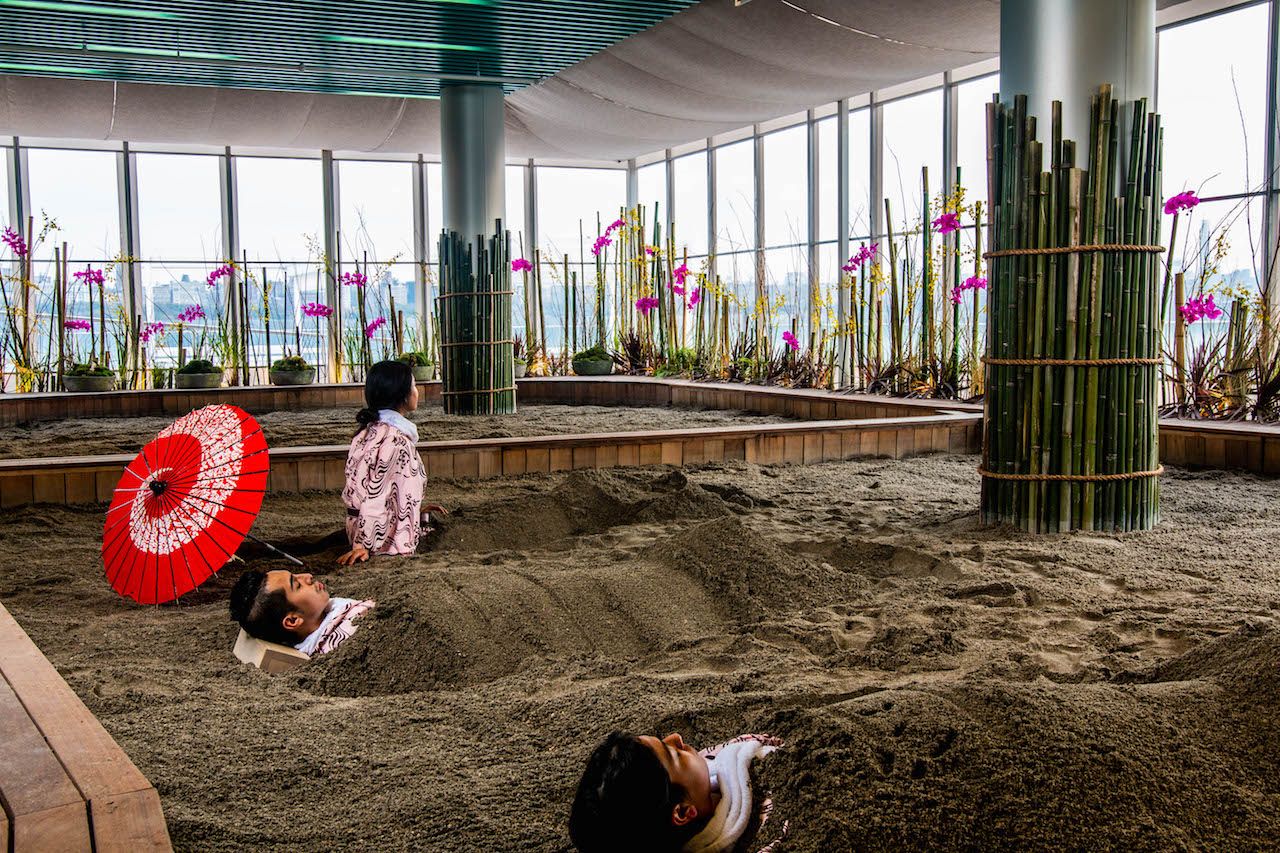 An attendant will then begin to bury you with this ovenlike sand, covering your entire body up to the neck. You’ll begin to feel the heat immediately, quickly breaking a sweat as the detoxifying process begins. Sand’s low thermal conductivity implies that it gradually warms up on the body, instead of immediately baking. For some (including this writer) it can feel a bit anxiety-inducing to be covered with hot sand; for others it’s relaxing, imbuing the permeating zen of SoJo.

Time’s up after 15 minutes — you don’t need any more than that — and slowly you will break out of the volcanic molding and go rinse off the sand, which has a habit of finding its way into unwanted places despite the protective robes and towel.

Volcanic sand bathing’s perks are incredible and often expeditious. “The benefits of sand bathing are a result of the unique natural properties of volcanic sand. Volcanic sand’s high mineral content makes the sand alkaline, or higher in pH level. Laying in this alkaline environment can have a number of benefits from promoting a deep detox through your pores, reducing inflammation, and even improving certain skin conditions,” says Esther Cha, marketing manager of SoJo Spa Club. “The heat and weight of the sand also work together to help loosen stiff joints and muscles. Fans of gravity blankets may also appreciate the anxiety-reducing effect.”

These numerous effects lend to the practice’s emerging popularity outside of Ibusuki. SoJo might be the first in the US to recreate Japanese sand bathing, but it probably won’t be the last.

After a day of lounging around SoJo, you’ll likely leave feeling resplendent and refreshed — a sentiment important to retain as the chaos of New York City soon engulfs you again.

The fall rates for SoJo Spa Club are $50 during the week and $65 during the weekend; the Japanese sand bath is an additional $20. The entry price might seem steep, but you can spend an entire day pool-floating and sauna-hopping, so it quickly becomes worthwhile. There is also a free shuttle to transport guests to and from Times Square, bypassing the many tolls that driving from the city would incur. Just make sure to register ahead of time as the shuttle fills up quickly.

If your dream trip is to Japan but the flights are a bit out of budget, give Edgewater, New Jersey, a try for an authentic replication of these coveted sand baths, lifted straight from the shores of Ibusuki.

WellnessThe Best Places in the US To Try Forest Bathing
Tagged
Lifestyle Wellness New Jersey, United States
What did you think of this story?
Meh
Good
Awesome