Florida is renowned for many things — sandy beaches, amusement parks, traffic lights that change inexorably slowly, Cuban food, etc. Trekking through pristine national wilderness? Not so much. But the Sunshine State is actually home to one of the country’s most underrated treks — the Florida National Scenic Trail. The 1,300-mile trek from Big Cypress National Preserve in the tropical southern part of the state north to the Gulf Islands National Seashore south of Pensacola doesn’t get nearly as much attention from the backpacking community as the heavily trafficked Pacific Crest Trail or Appalachian Trail, but there are some serious advantages to making this your next backpacking destination — especially if you haven’t done a long-distance trek before. Here’s why the Florida National Scenic Trail should be on your radar and everything you need to know to make an expedition there happen. 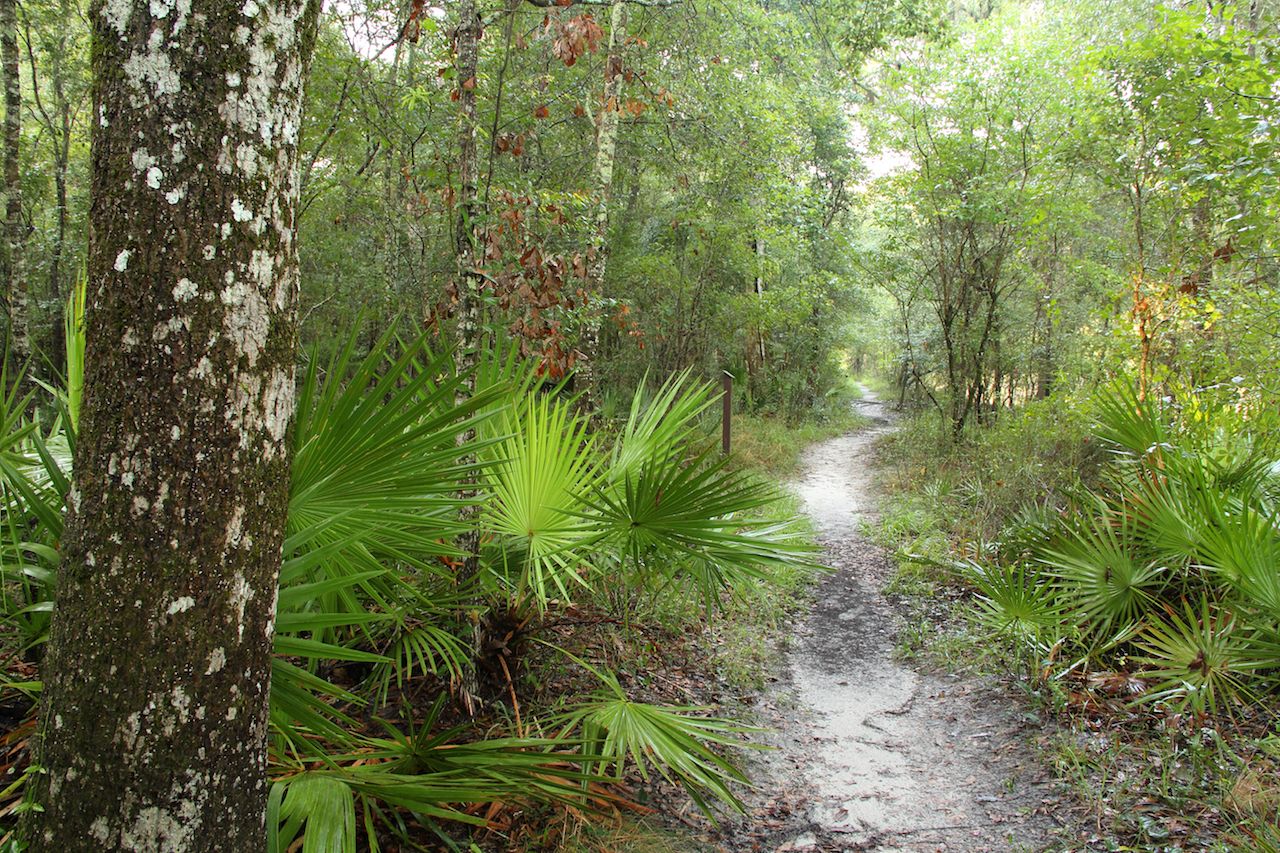 What is the Florida National Scenic Trail?

While it’s totally understandable if you hadn’t heard about it until now, the Florida National Scenic Trail has actually been in place since the 1960s. Originally known simply as the “Florida Trail,” this trek is a 1,300-mile route traversing pretty much every type of terrain Florida has to offer. The entire trail sees some 350,000 visitors each year though only a small percentage actually makes the entire voyage from start to finish. The majority of those visitors are day-trippers from the state’s major cities.

The trek became the eighth National Scenic Trail in 1983 and is now maintained by the US Forest Service. As a backpacker, this works to your advantage — the trails and campsites along the way are well-maintained. Another draw for beginner trekkers is that you won’t be summiting any peaks along the way. The highest elevation you’ll reach throughout the entire journey is fewer than 300 feet above sea level. Consistent altitude gain and loss, the bane of many long-distance backpackers’ existences, is essentially non-existent. 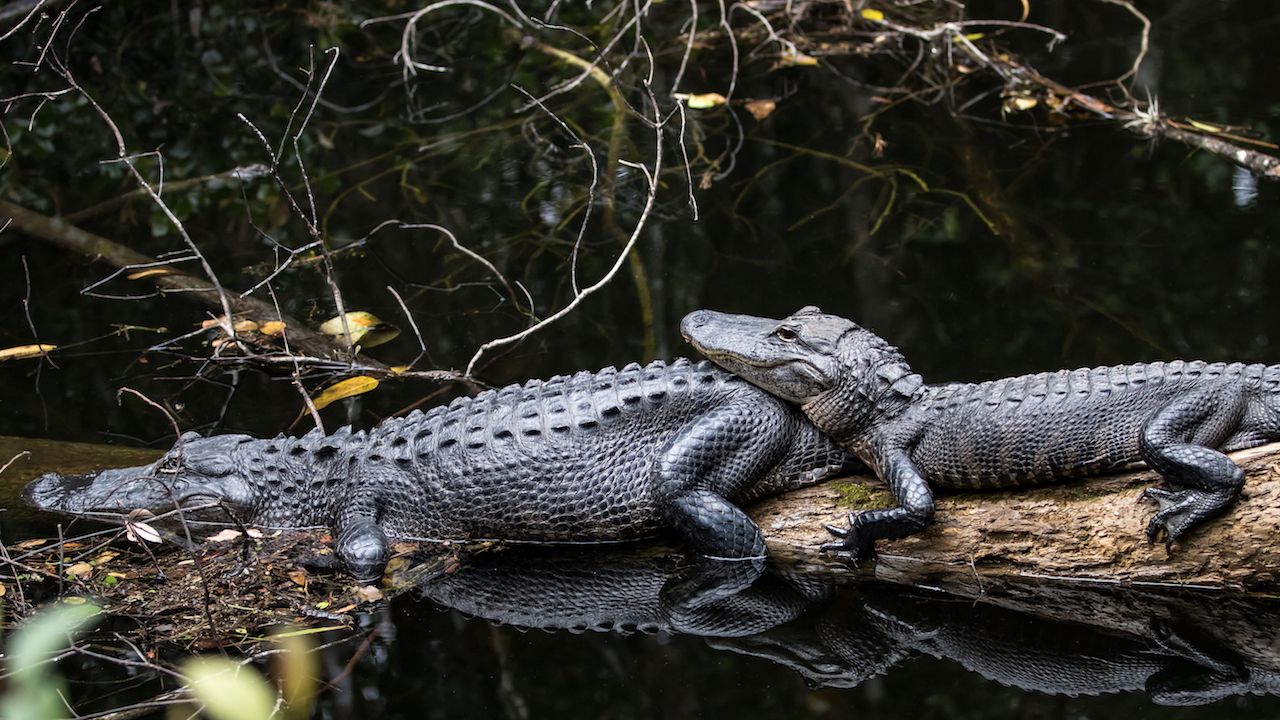 In addition to hikers, the journey is home to more variety of flora and fauna than any other designated National Scenic Trail, and because it’s Florida, these might be of the types not often seen while hiking in more mountainous regions. Watch out for wild hogs and alligators!

What is the route?

Start in Big Cypress National Preserve and get ready to follow your north-facing compass. The trail is clearly marked — the National Forest Service has made it a priority to ensure that signage is aplenty so that every person who uses the trail, from day-hikers to long-distance trekkers, knows that they are on it. Look for orange markers, known as blazes, and you’ll know you’re heading in the right direction. Much to the chagrin of diehard backcountry trekkers, the journey often includes sections of walking along roads and wider paths. Raised boardwalks come to the rescue in many spots where the trail gets a bit too mushy. 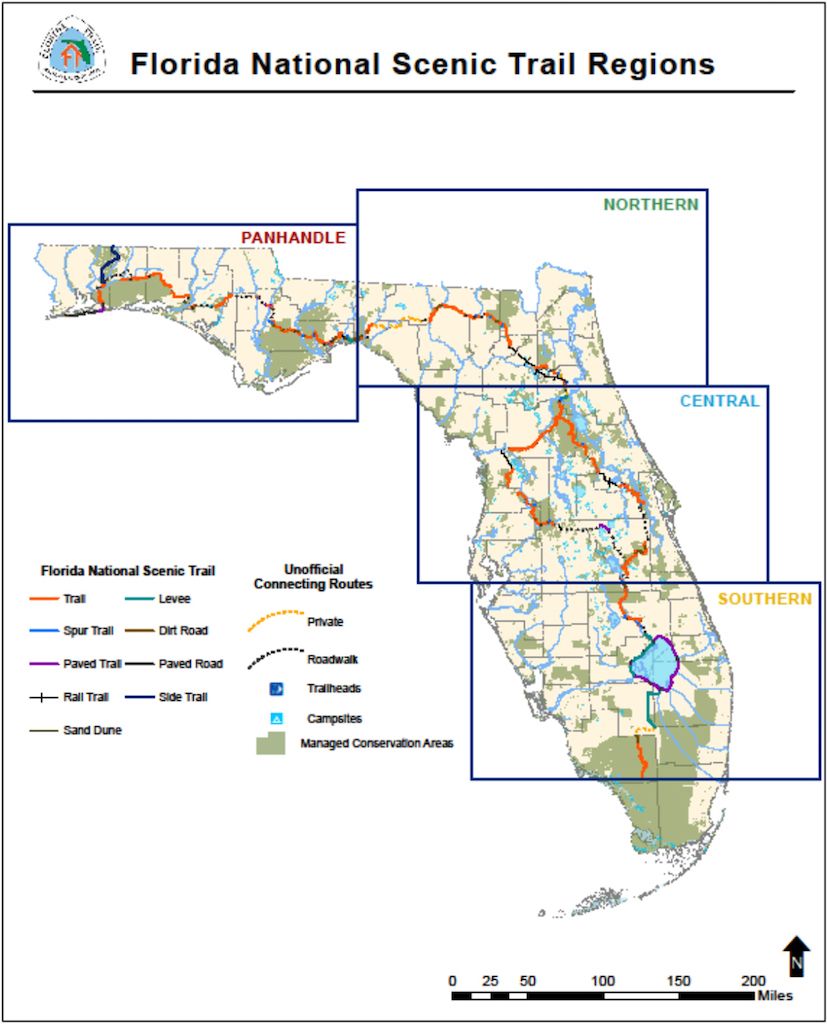 The trail is broken up into four regions, running south to north. Many choose to break the hike into sections, of which there are a total of 42 according to the Florida Trail Association. Perhaps you have time to complete one region per year, breaking each into sections and doing one at a time. 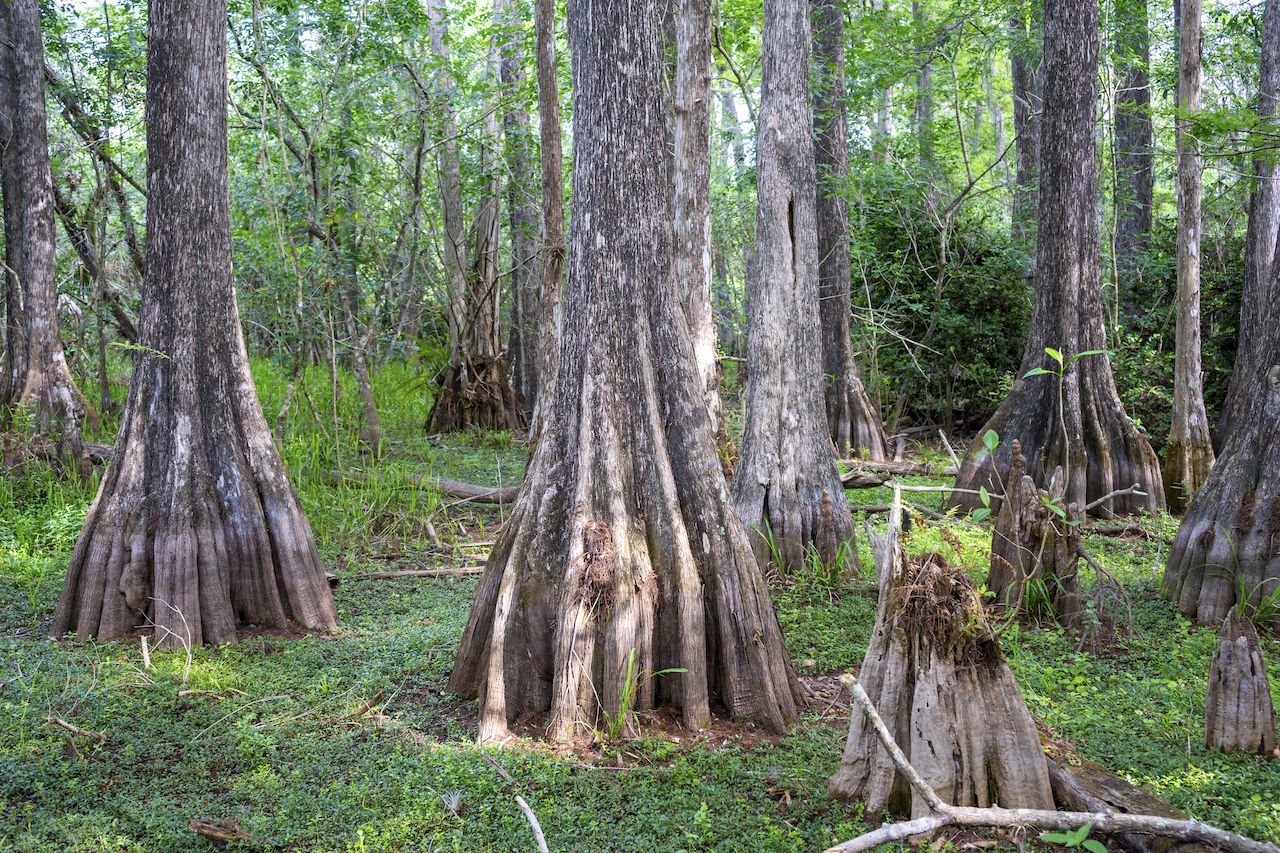 Start out in the wet lowlands of Florida’s Big Cypress National Preserve and work through sawgrass prairies as you start the long journey north. You’ll meet up with the Kissimmee River, pass through swamp and rangeland, and try to withstand the humidity as you break yourself in for the long road ahead. 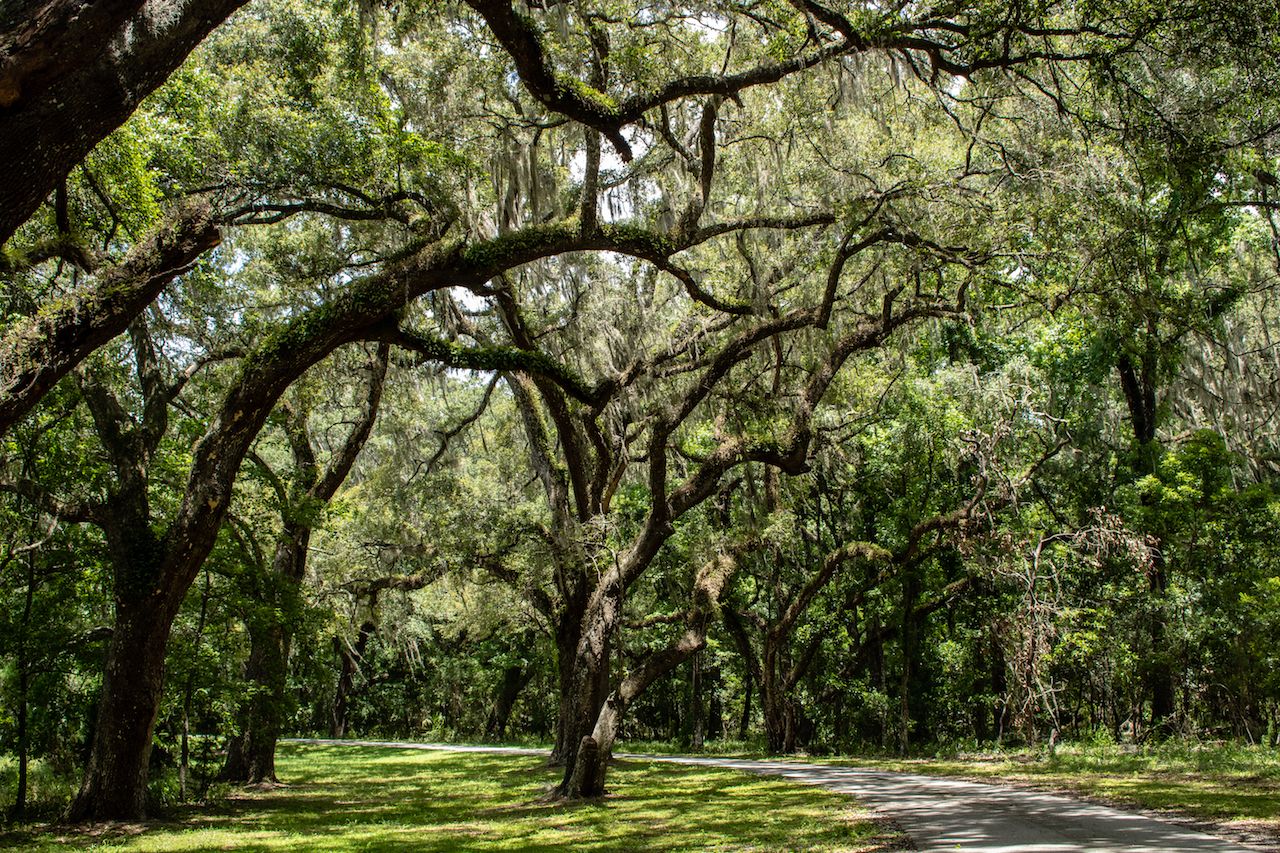 Looking at the map, you’ll notice that near Orlando the trail splits into two, forming something of a loop. This is the Central Region. You’ll take either the Eastern or Western Corridor and follow that path until the trail merges again in the Ocala National Forest. This portion of the trek passes through the Withlacoochee State Forest — yes, that’s actually what it’s called. 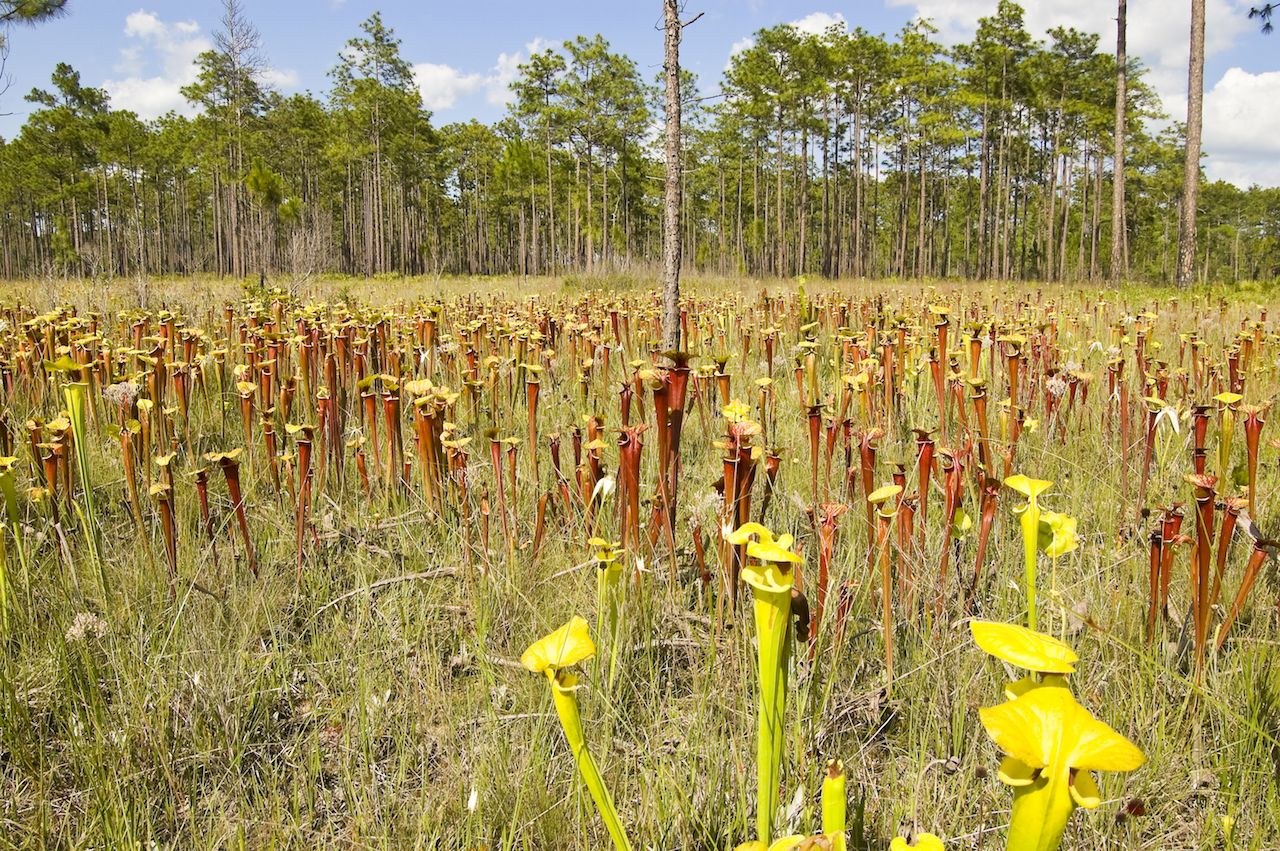 Flatwood forests dot the landscape here as you work through old plantations, dense vegetation with palms overhead, and the occasional Civil War battlefield. Just over 40 miles of this stretch runs along the Suwannee River, the sole river-centric part of the section. The Econfina River passes through the section, as well. You’ll likely spot animals as you walk through St. Mark’s National Wildlife Refuge and into the Apalachicola National Forest. If you’re a wildflower hunter, this part of the trek is likely to be your favorite. 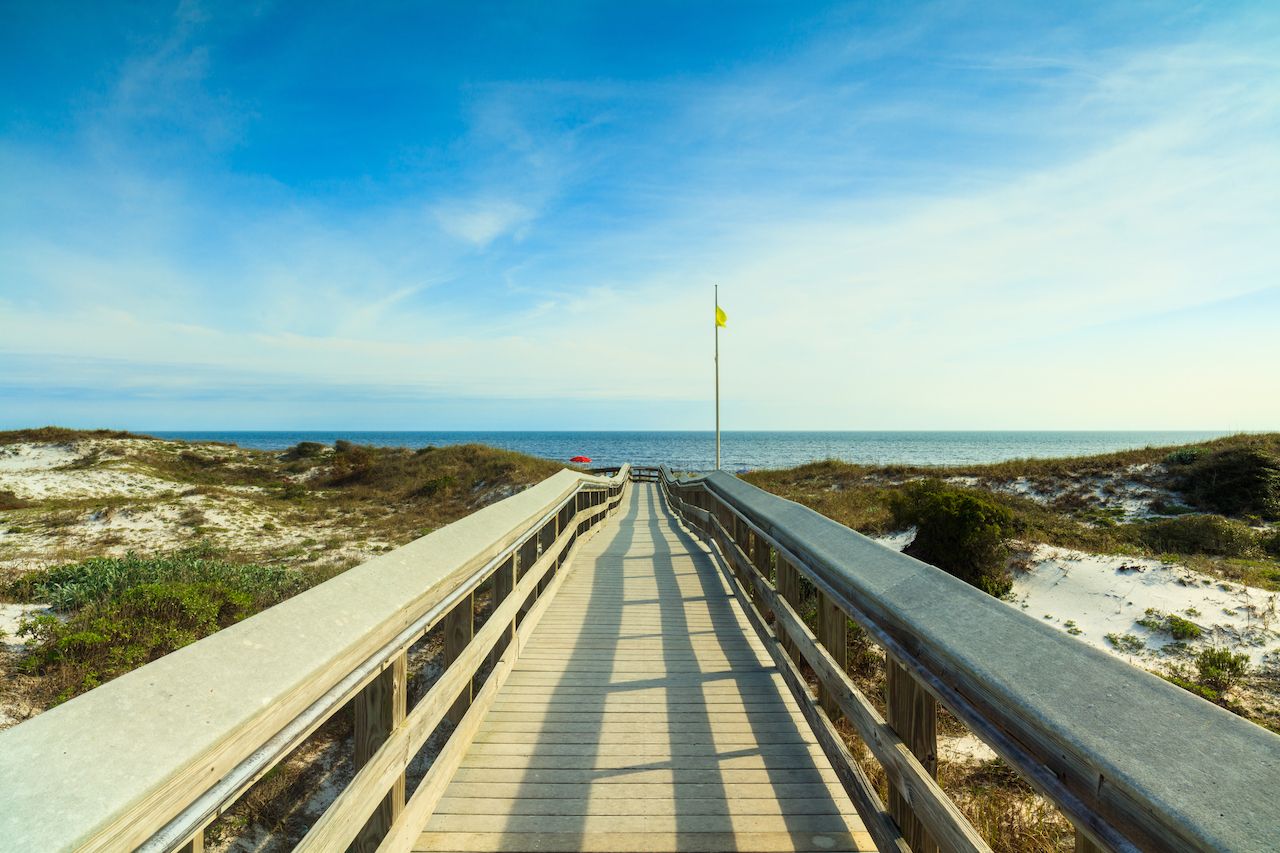 Here is where you work your way both along and near the Gulf of Mexico, sweating the glory of the final stages of your trek. Beachside trekking is an experience most backpackers never try, which is part of what makes this trail unique to the 10 other National Scenic Trails. 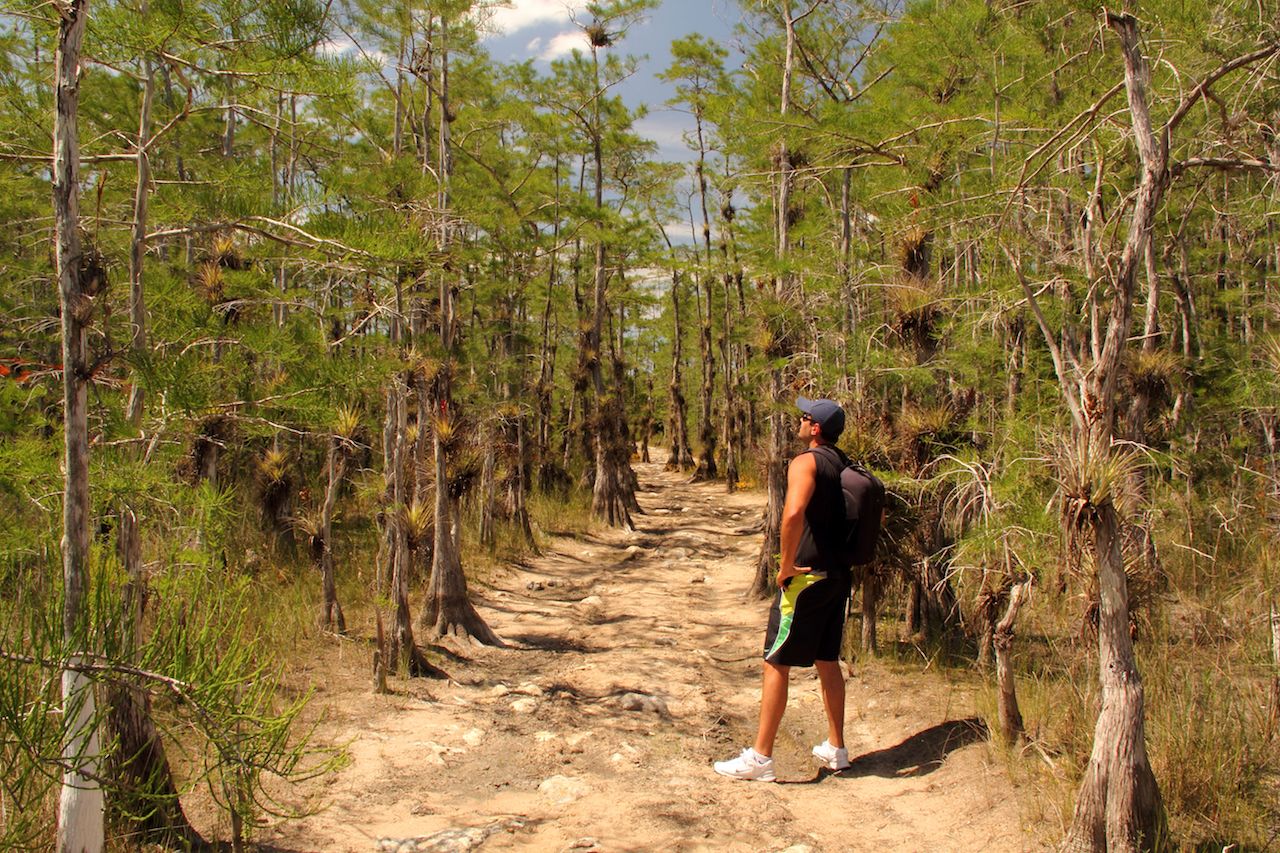 If you plan to do the entire 1,300 miles in one go, allow up to three months. Many complete the journey in 60 days; however, if this is your first long-distance trek, you may want extra time. You may also choose to break the trek into sections or simply do a two- or three-day camping and backpacking trip on only part of the trail. As we noted earlier, most of the trail’s users are only there for one day — meaning you’re ahead of the pack even if you only camp for a night. If you join the club of diehards who hike the full 1,300 miles from start to finish, you’ll earn a certificate of completion from the Florida Trail Association.

Because the trail is divided into sections, most hikers break up the trek into smaller bits so that they’re not out on the trail for two or three months straight. Sections range from as little as 18 miles to upwards of 50 and can typically be done in one, two, or three days by hikers in good shape.

When it comes to food and supplies, many gateway communities are located adjacent to or near the trail from start to finish for hikers to restock. They also provide a nice break from solitude — if you find a bit of cabin fever setting in, a cold pint and warm conversation at a local pub make for a great remedy. Supplies and mail can be sent to these towns if necessary; just be sure to research when you plan to arrive and allow for delays on your end. 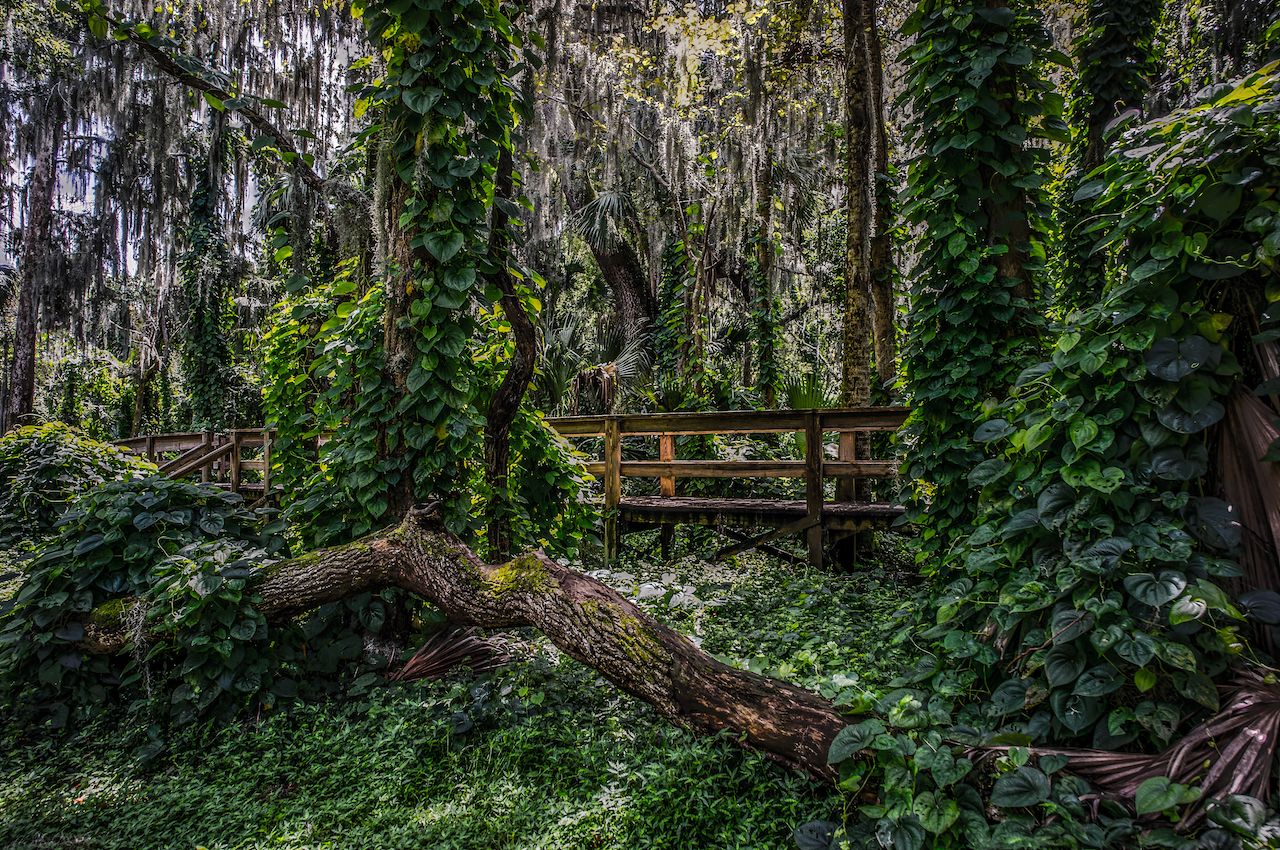 The best time to visit the Florida National Scenic Trail is between October and May. Winter is ideal because the days are shorter and cooler, and there’s no chance of being stuck in a snowstorm, so beyond a thicker coat to keep you warm at night, you won’t need any additional gear. The trail’s tradition holds that you should take off on the morning of January 1 and start a new year with the adventure of a lifetime — but you can start whenever you want as long as you’re prepared for the weather, maintenance, and crowds you’ll encounter along the way. In general, January through March is when the majority of thru-hikers make their journeys from south to north. You’ll want to avoid the dead of summer due to extreme humidity and more mosquitoes. 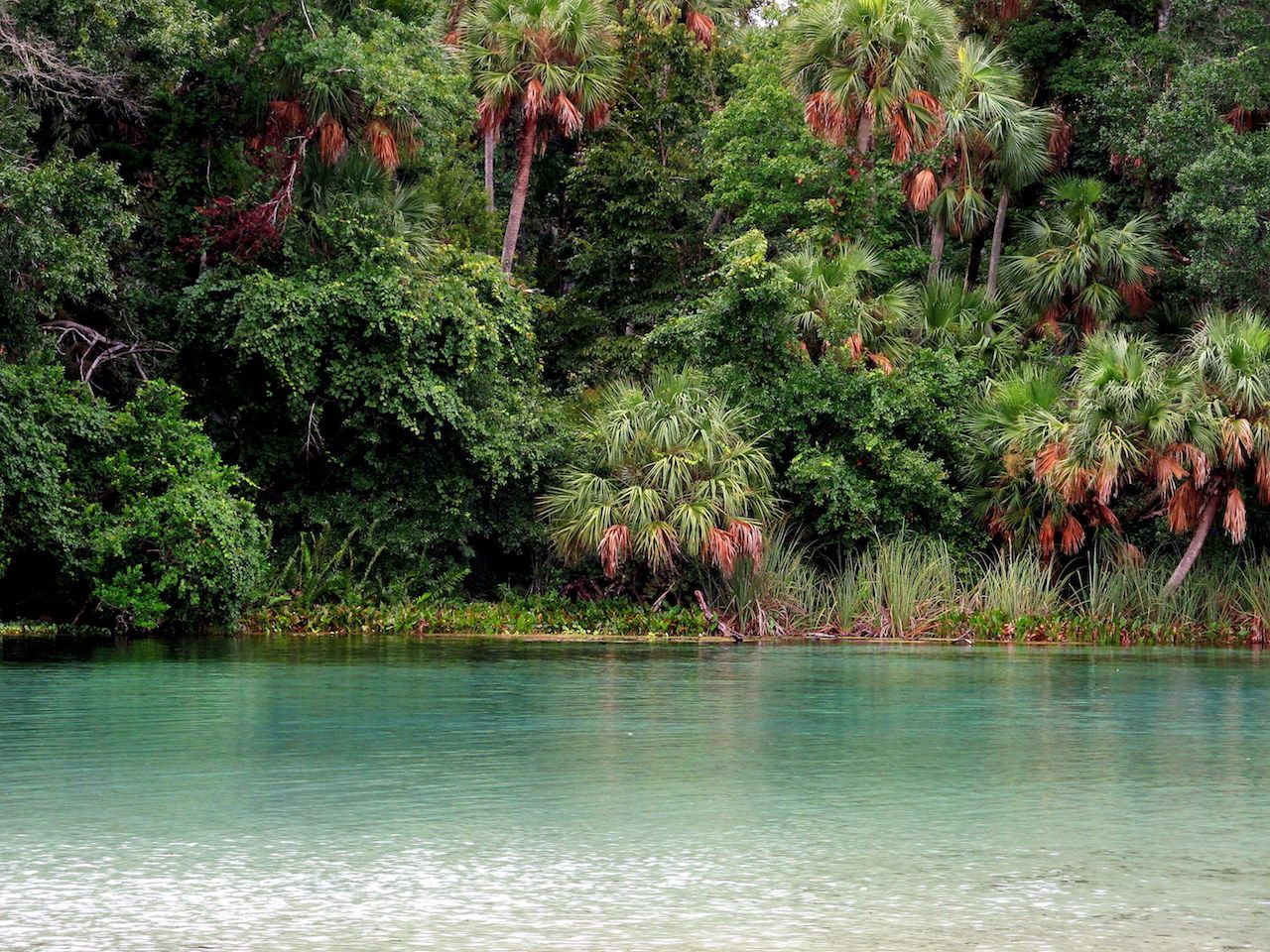 Where to camp along the way

A number of designated campsites are found in Big Cypress National Preserve, the national forests and state parks along the way, and other areas where there are higher rates of day use and weekend warriors. Beyond those, camping happens wherever you stop for the day. Find space that has been camped on before whenever possible to minimize your impact on the land, but don’t set up your tent on the actual trail itself because you don’t want to be that person that is in the way should another party make its way through the same area. If you’re trekking during hunting season, you’re required to use designated campsites to avoid any incidents. As always, when enjoying the great outdoors, follow the principles of Leave No Trace — pack it in, pack it out. 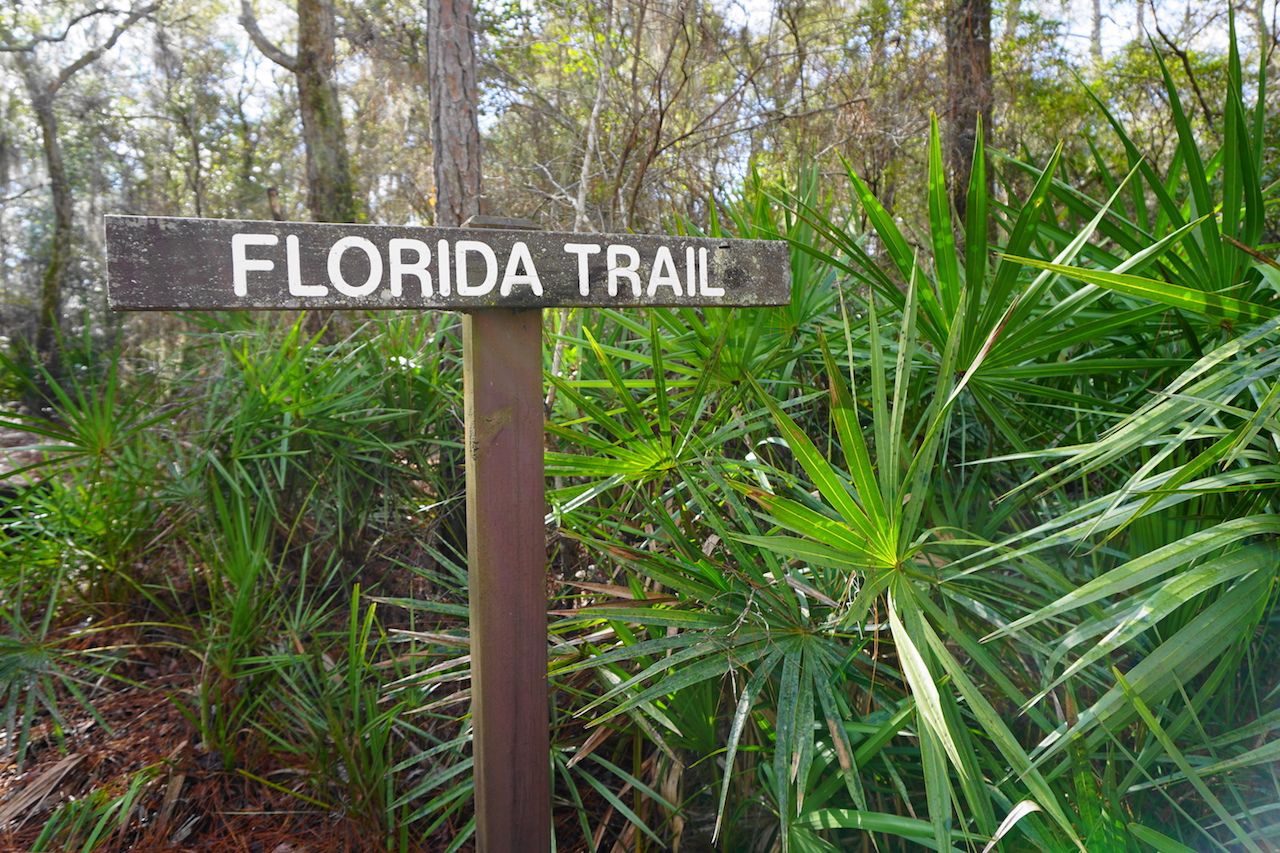 Do I need a permit?

The trek itself does not require a permit, but due to the fact that the trail passes through multiple parks and water management districts, an Indian Reservation, and wildlife refuge/management areas, thru-hikers do need a total of around 16 permits, fee receipts, and permission issues. This total varies year to year as construction projects start and end. A total of nine campsites along the way require a free permit, as well. To avoid last-minute headaches, you’ll want to ensure that you have all of this taken care of at least 30 days before you plan to head out. Here’s a quick list, but head to Thru Hike Florida for detailed rundowns of each: