Funeral potatoes: The name alone conjures gloomy scenes of mourners. The cheesy potato casserole is likely the invention of a women-run philanthropic organization within the Church of Latter Day Saints called the Relief Society. In order to ease the burdens of grieving families, Relief Society members whipped up the dish to serve at post-funeral luncheons, which is how it earned its unflattering moniker.

Easy to make and serve for a big group, the dish quickly became a staple at gatherings within the Mormon church — LDS Daily writes that “funeral potatoes are definitely inseparable from Mormon culture. While the origins of funeral potatoes might be somber, the dish is now associated with family, comfort, and Thanksgiving dinner.”

A basic funeral potatoes recipe includes cheese, creamy soup, onions, potatoes, and a crunchy chip or corn flake topping. The key to funeral potatoes is of course the carbs, which come in the form of hash browns — frozen is perfectly acceptable, though the more dedicated home cook will likely shred fresh potatoes. Ham, jalapeños, and bacon can all be added to funeral potatoes for an additional layer of flavor.

In a 2017 Food & Wine story, Jenn Rice (who was introduced to the dish by her husband, a native of Salt Lake City) writes that funeral potatoes are, “one of the most oddly satisfying creations that exists in America—nay, the world,” and names them “one of the greatest American triumphs.” But she also admits that few people outside the “Intermountain West,” have had the opportunity to try them. Perhaps that theory is evidenced by a scandalized 2018 New York Post article calling funeral potatoes “oddly named,” “disturbing,” and “mysterious.”

Such claims will sound outrageous to people from the Western United States. Funeral potatoes are no longer confined to Mormon funeral luncheons, and now grace dinner tables from Idaho to Colorado all the way down to Arizona. It’s worth noting that you’ll find funeral potatoes as far south as Texas, where the dish might go by the name “potato casserole.” The blogger who goes by the name Homesick Texan remembers eating potato casserole at her grandmother’s funeral, writing, “While it will be impossible to fill the void left by Grandma Ashner, for a moment at least, funeral food such as this potato casserole rose to the occasion and did its part.” 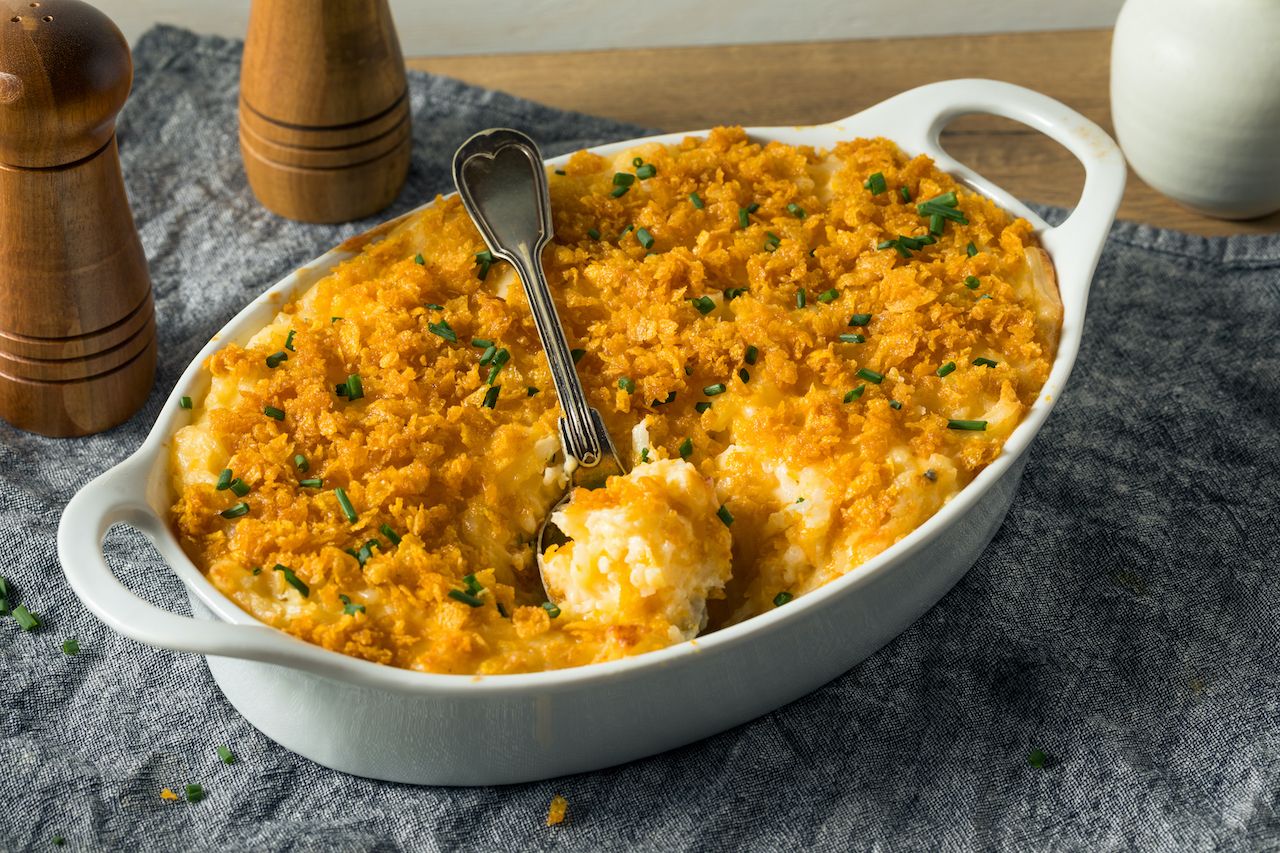 Still, the dish remains so ubiquitous in Utah that the Utah State Fair sometimes holds a cooking competition specifically for funeral potatoes. When the Winter Olympics were held in Salt Lake City, the state issued a series of collectible pins depicting “Mormon soul food,” including one in the shape of a dish of funeral potatoes.

On Twitter, those users familiar with the dish cracked jokes about how deeply rooted funeral potatoes are in Mormon culture: On July 23, one user wrote, “Don’t forget to set out some funeral potatoes for brigham young tonight!,” a reference to Pioneer Day, celebrated on July 24, as the day the supposed Mormon prophet arrived in the Salt Lake Valley. Another quipped, “I’m going to take this opportunity to remind my fellow Saints that…GREEN BEANS DON’T BELONG IN FUNERAL POTATOES.”

Teasing aside, for many home cooks in this mountainous Western region, you can’t do Turkey Day without funeral potatoes. So why is this dish so well-suited to the epic Thanksgiving dinner spread? You might look to the rest of the region’s cuisine for your answer: Funeral potatoes come from a long tradition of casseroles that rely heavily on convenience foods, those inexpensive boxed or canned ingredients with a long shelf life, making them a favorite among big families.

The commitment to convenience is so strong that a brand called Augason Farms sells funeral potatoes in a pouch — all the dried ingredients (potatoes included) can be poured into a baking dish with water and then baked in the oven for an even faster way to prepare. The product is sold out — perhaps another testament to Americans’ obsession with funeral potatoes.