The bright red and green signboard on the cobblestone sidewalk in front of La Casita de Victoria read ”cuy al palo”. My Spanish may be rudimentary, but the object speared on a wooden stick and suspended over an open fire looked like a plump, toothy rat with no tail. At this roadside food stand and many others like it in rural Peru, the house specialty is roasted guinea pig to go.

It’s estimated that indigenous people in the Andes Mountains have been eating domesticated cuy (pronounced “kwee”) since 5000 BC. It’s such a part of the culture that a 1753 painting of the last supper in Cusco’s Cathedral Basilica shows Jesus and his disciples with cuy as the main course. Peru even has a cuy holiday, Día Nacional del Cuy, that’s celebrated on the second Friday of October with festivals and fairs across the country. Rural villages have always had cuy on the menu, but it’s increasingly common in major cities — and even in the US. The rise in popularity has been good for farmers as the average farmer makes around $30 a month in Peru whereas guinea pig farmers can make as much as $130, according to the BBC.

But if you grew up in the West like me, chances are you’ve only encountered these furry critters as a pocket pet. 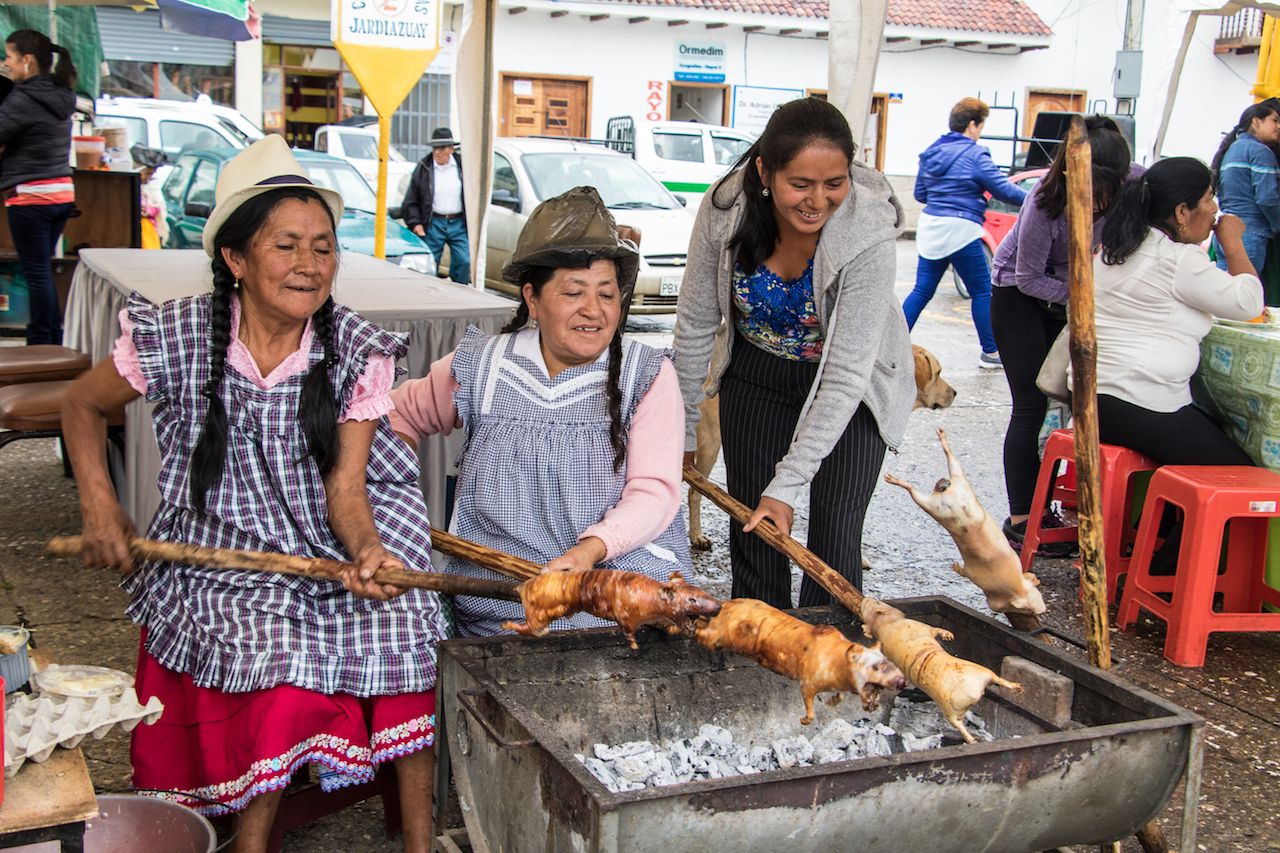 At La Casita de Victoria, I walked toward the adobe clay oven for a closer look at the creature on the spit. A woman deftly rotated the stick a quarter turn, and the animal’s skin began to bubble and brown. As the wood smoke wafted upwards, our guide explained how cuy al palo is traditionally prepared: First, the guinea pig is rubbed with salt and garlic for added flavor, then it’s skewered and roasted whole — teeth, claws, ears, and all. It can be an unsettling sight for first-time visitors.

There are plenty of practical reasons why cuy has remained a dietary staple over all these centuries. The animals are high in protein and they’re easy to raise — all you need is a small pen and a steady supply of vegetable scraps for food. I visited a Quechua household in nearby Chinchero and saw a pen full of guinea pigs happily munching away on lettuce underneath — irony of ironies — the very stove where they would be cooked.

Despite their name, guinea pigs are neither pigs nor from the West African nation of Guinea. The rodent species is native to the Andean highlands of Peru, Bolivia, Ecuador, and Colombia. The Inca ate cuy for ceremonial meals and religious festivals, and folk doctors used the mammals in traditional healing rituals to diagnose diseases. It’s also clear that the animal played an important role in society. Archaeologists in Peru and Ecuador have unearthed statues of guinea pigs that date back to 500 BC.

I tried to keep this rich history in mind as I watched the woman lift the crispy cuy from the fire pit. After a few swift chops with a knife, she wrapped the segmented meat in a piece of plain brown paper, popped it into a paper bag with a fistful of napkins, and wished us buen provecho, or “enjoy your meal.” 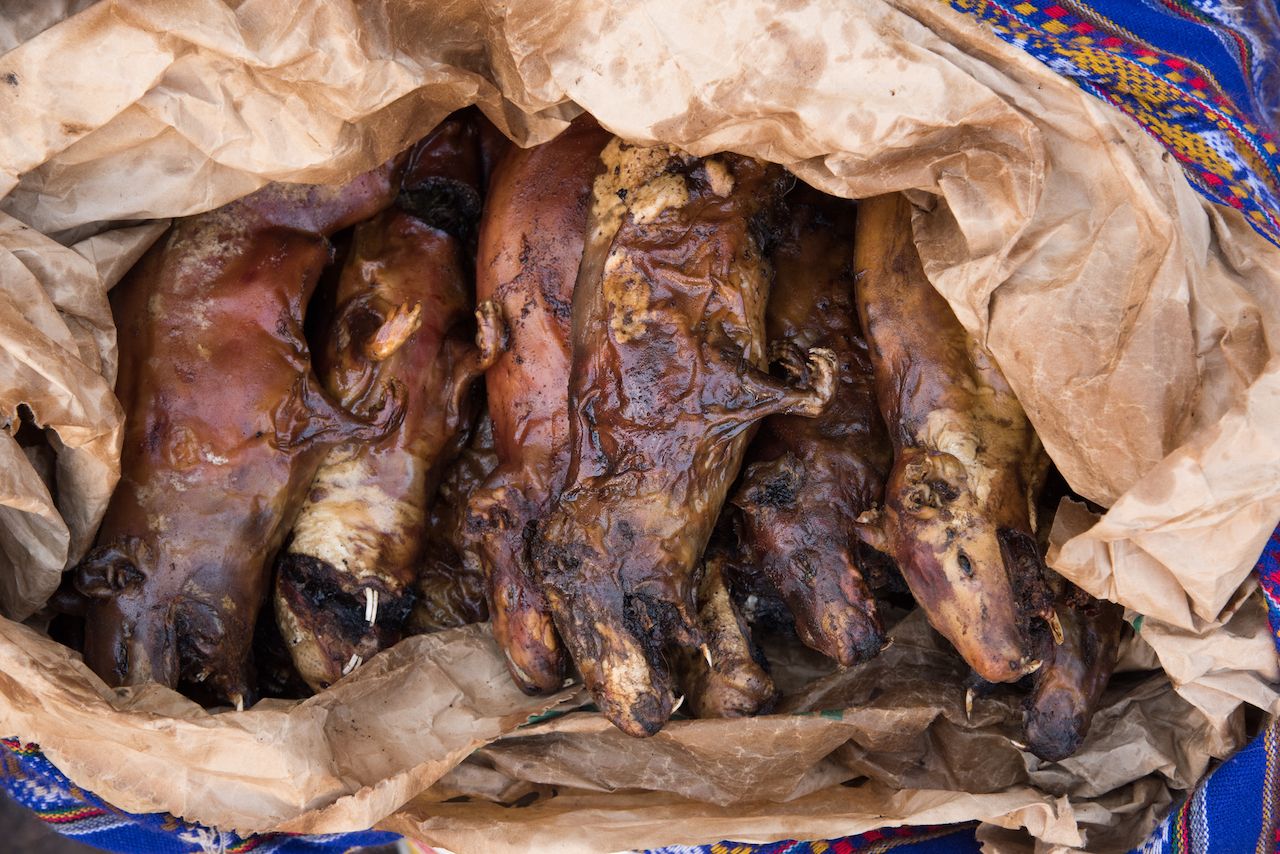 As we drove away from the cuyería, our guide explained that roasting is just one way Peruvians prepare guinea pig. Another popular local dish is cuy chactado where the meat is flattened and then deep-fried. Some of Lima’s top chefs are preparing cuy dishes without the feet and head attached. At roadside stops, however, cuy roasted on a stick is the most common.

A tantalizing aroma filled the vehicle as we unwrapped the paper packaging. There’s only one way to eat cuy al palo, and that’s with your hands. It’s a bit messy, but that’s what the napkins are for.

I picked up a hind leg and tried to ignore the little claws attached to one end. I bit into it and pulled off a piece of meat. It tastes kind of like a cross between rabbit and turkey. The meat is tougher and gamier than chicken, and it’s surprisingly tasty.

A few days later, I found myself in the middle of a street fair in Cusco. As I wandered among the food vendors, I spied a couple of familiar blackened shapes propped up against a whole roasted chicken and stack of round yellow cornbreads.

“Cuy al palo,” I thought to myself, and this time my mind translated it to “delicious.”