Long before bullet trains connected Tokyo and Kyoto, travelers used Nakasendo Road to travel between the two cities, stopping at postal towns along the way to sleep, eat, and rest the horses. Today, it is possible to hike portions of the Nakasendo Trail in the Kiso Valley, which lies between the two cities, and to visit beautifully preserved towns from the Edo period (1603-1868) when Japan was ruled by a shogunate centered in Edo, the old name of Tokyo.

The most straightforward section of the entire 330-mile Nakasendo Trail to hike is the stretch that connects the towns of Magome and Tsumago. Here the trail is well-maintained, transportation connections are convenient, and you can even forward your luggage. This hike not only offers a glimpse into Japan’s past, but also takes you through bamboo forests, past thundering waterfalls, and alongside rushing rivers.

For travelers who enjoy the outdoors, history, and culture, the Nakasendo Trail is must. Visiting the Kiso Valley is also a great way to break up the journey from Tokyo and Kyoto and get a respite from the bustling cities of Japan. Here’s how to do it.

The hike from Magome to Tsumago 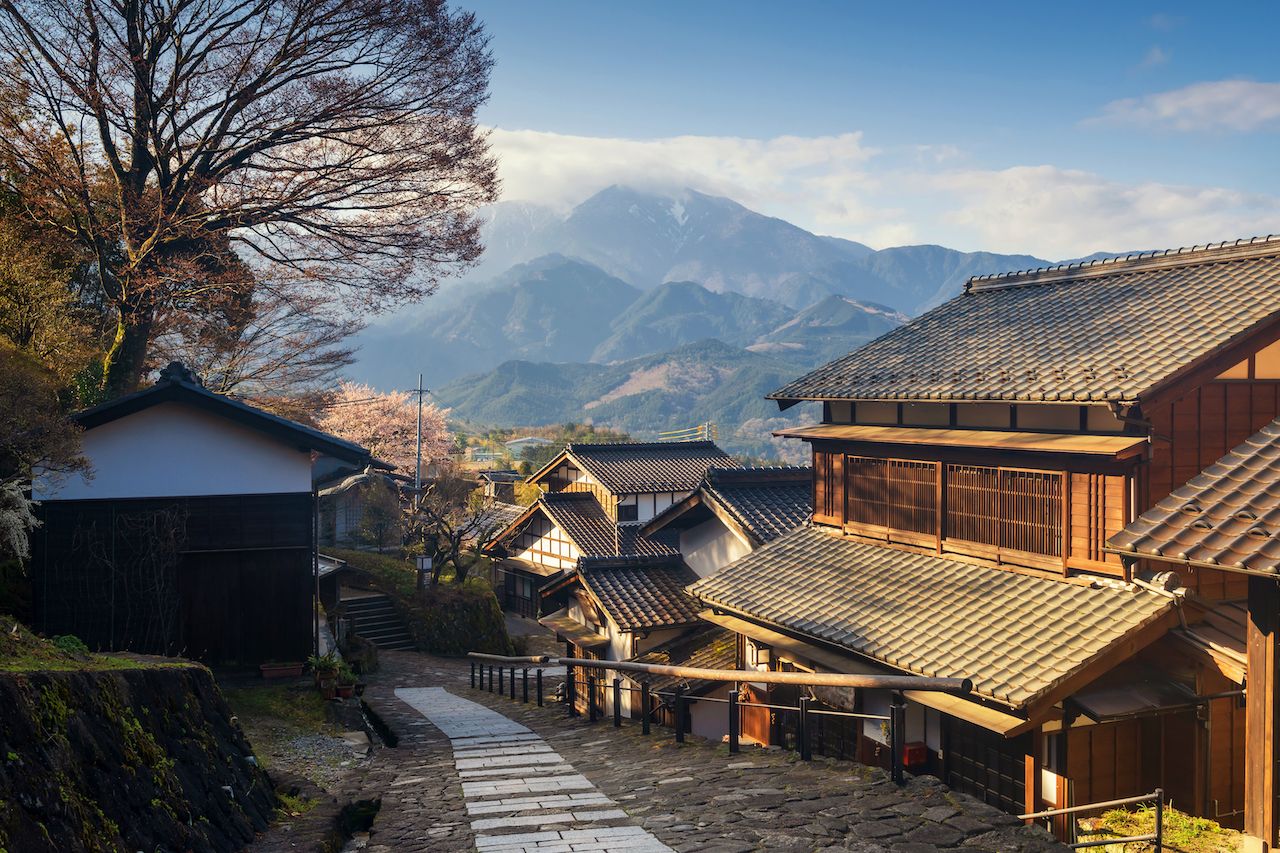 The five-mile hike from Magome to Tsumago can be done in two to three hours, but plan to take longer since there are many points of interest along the way. The trail is well-signposted — it’s almost impossible to get lost — and has 13 bathrooms along the way. You can hike in either direction, but going north to south from Magome to Tsumago is easier since Tsumago is at a lower elevation.

The trail starts at an overlook outside Magome with views of the Japanese Alps and valley below. Enjoy the views while stretching your legs — the next 1.5 miles are mostly uphill, and your legs will burn at times. As you leave the city and enter the forest, you’ll see the first of many bells stationed along the trail. Signs on the bells instruct hikers to “ring hard against bears.” Don’t worry, locals say bear sightings are rare, but just in case you may want to give them a hard whack.

After 1.3 miles, the trail arrives at the Kumano-jinja Shrine. Hike up the stone stairway to see the beautifully time-worn Shinto shrine. Shortly after the shrine, you’ll reach Magome Pass, the highest point on the trail, and it’s mostly downhill the rest of the way. After the pass is a small cemetery with offerings placed around moss-covered tombstones.

Halfway through the hike, you’ll arrive at the Tateba Tea House, where local staff in traditional clothes provide free hot tea and stoke a fire in an irori fireplace. Take time to rest, enjoy the fire, peruse the artifacts on display, and regroup for the rest of the hike.

After the Tateba Tea House, the trail follows a stream through dense forest and eventually arrives at the twin Otaki and Metaki (male and female) waterfalls. In the book, Miyamoto Musashi, Miyamoto, a famous samurai warrior, and a young lady, who is betrothed to his friend, are traveling along the Nakasendo Trail. Consumed by lust, they stood under different waterfalls to calm down. Standing in the midst of the waterfalls is a great way to cool off even if you aren’t caught in the throes of passion. From the falls, the trail leaves the woods and passes rice paddies and country homes. Mountains and forested hills come into view as the trail parallels the rushing Araragi River on the way to Tsumago.

What to do in Magome and Tsumago 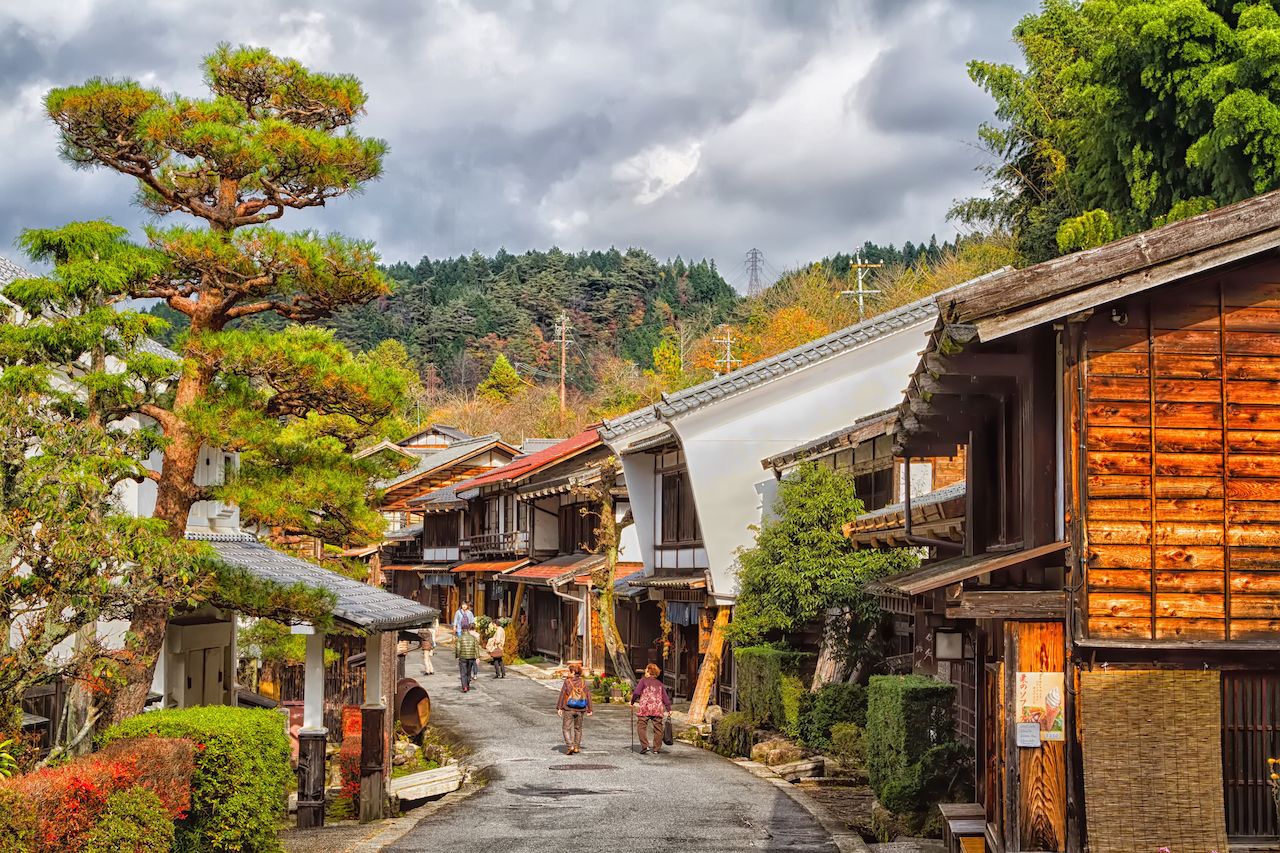 The steep main street of Magome starts at the bus station and parallels a water channel that operates a series of photogenic watermills. Noodle shops, cafes, confectionary shops, and souvenir stores, along with temples and cemeteries, line the main street. While in Magome, be sure to try gohei mochi, a grilled cake of sticky rice covered in a sweet walnut sauce. Several shops along the main street sell this filling snack.

The pedestrian-only main street of Tsumago feels more authentic than Magome since most of the buildings are older. Tsumago was the first town to undergo renovations in the 1970s and served as a model for the restoration of other villages in the valley. Tsumago is surrounded by mountains that serve as a backdrop to the wooden inns and shops. Also, there are several temples in town, including the Kotoku Temple that dates back to the 1500s. On the north end of the town, a short climb leads to the Tsumago Castle ruins. The view from the ruins of the mountains and village below makes the short walk worth the effort. 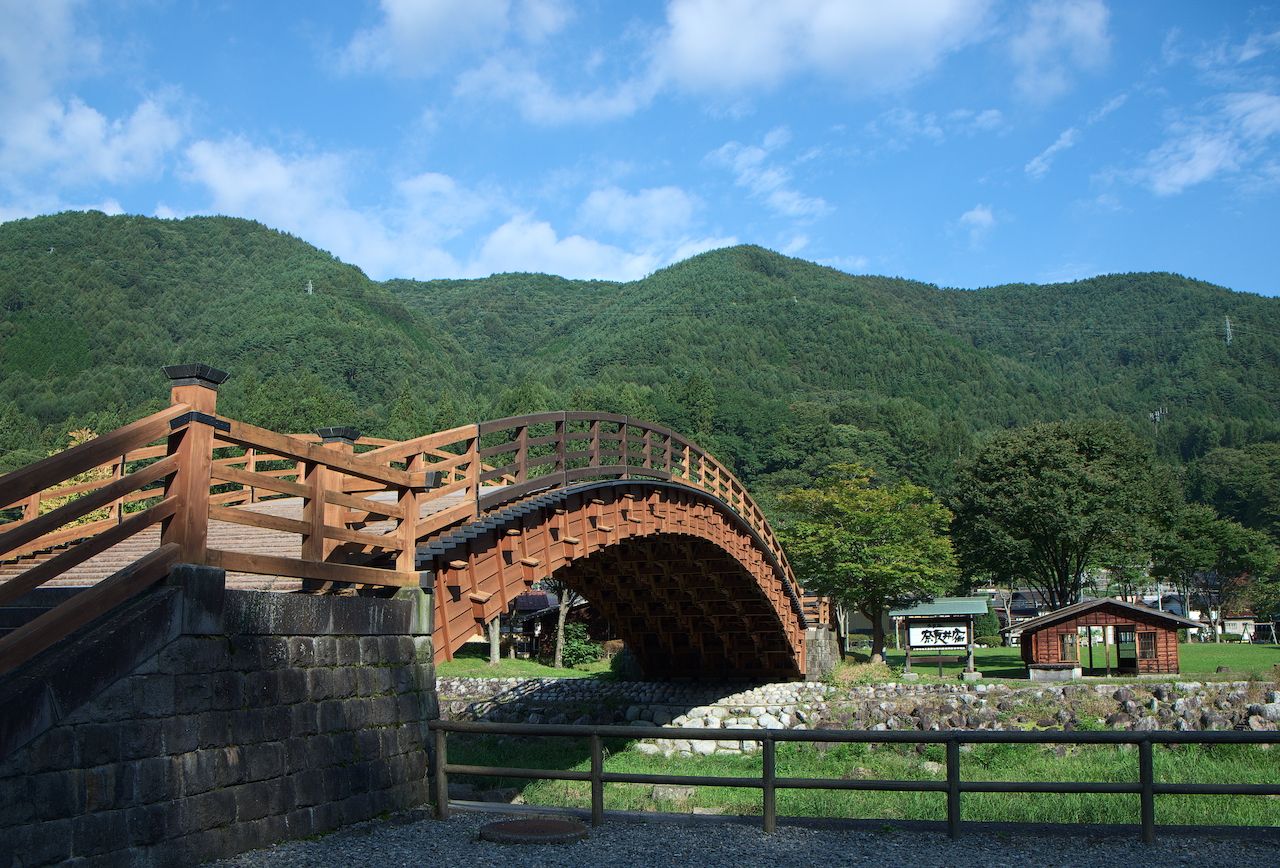 Staying an additional night in Tsumago allows time for a day trip to Narai, another stunning postal town — or a town that served as a way station where a traveler could take a rest. The scenic train trip from Tsumago to Narai follows the Kiso River and has views of waterfalls, mountains, and picturesque villages. The Narai streetscape is similar to Tsumago and Magome with classic Edo buildings. The enthusiastic workers at the tourist information center in the rail station provide maps and offer advice on what to see while in town.

A walk down Kagi-no-te Road, Narai’s central street, passes several shrines, cafes, noodle shops, ryokans (traditional inns), and Buddhist temples. Highlights include the beautiful Chousen-ji Temple, the Nakamura Residence, and the museum at the Kamidonya Shiryokan, which has excellent views from the second floor. Perhaps the best activity in Narai walking the streets and then stopping for a beverage while soaking up the small-town vibes before having lunch at one of the noodle shops.

Getting there and away 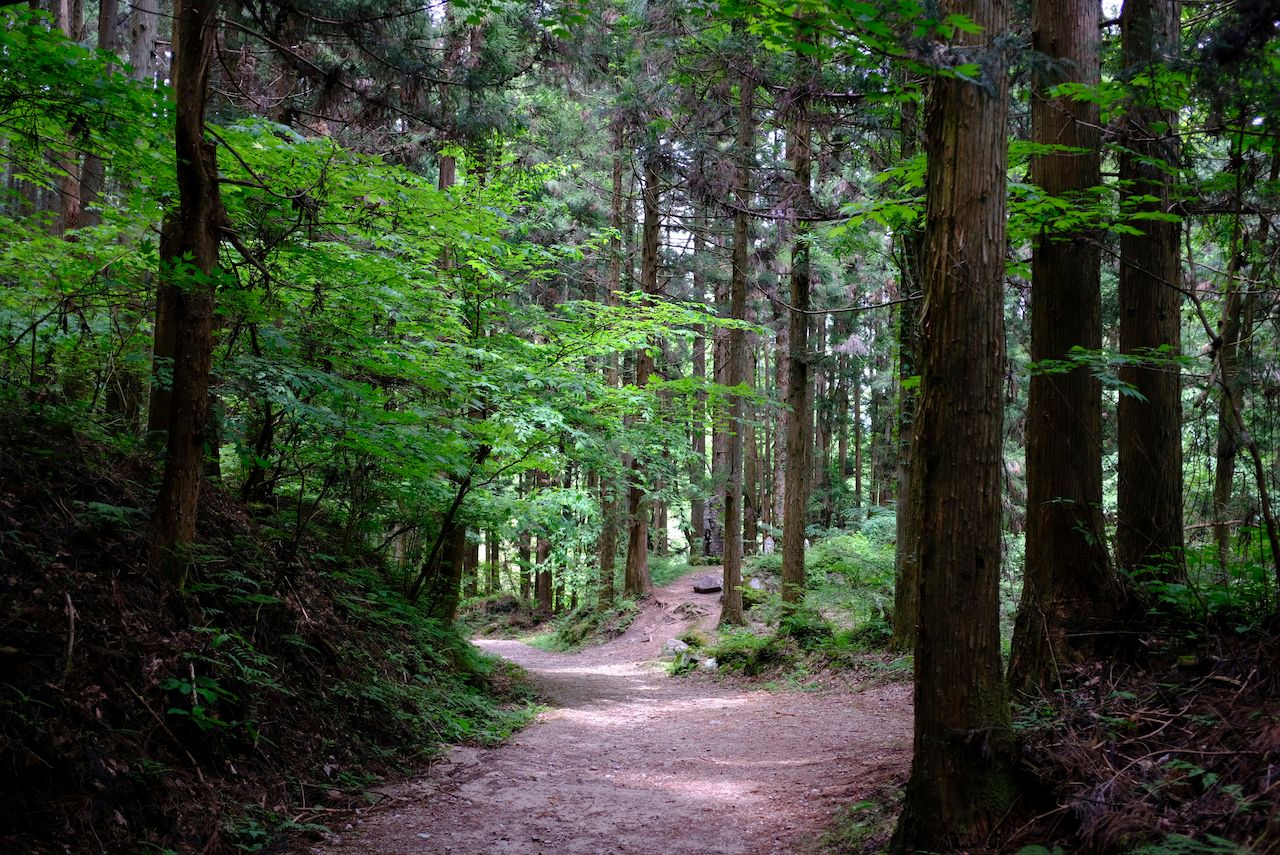 Travel to the area takes about three hours from Tokyo and 2.5 hours from Kyoto. From Tokyo or Kyoto, take the Shinkansen bullet train to Nagoya. From Nagoya, take the Chuo Line to Nakatsugawa if headed to Magome or to Narai if going to Tsumago. From the train stations in Nakatsugawa and Narai, buses take travelers the short distance to Magome and Tsumago. The Japan Rail Pass covers the entire train journey plus the buses.

Among the most convenient factors of this hike is that you can have your luggage delivered from one town to the next. Drop off your luggage at the tourist information office in Magome or Tsumago before 11:30 AM for delivery to your hotel in the next town. The service runs from April through November with a fee of 500 Japanese yen (under $5) per bag. 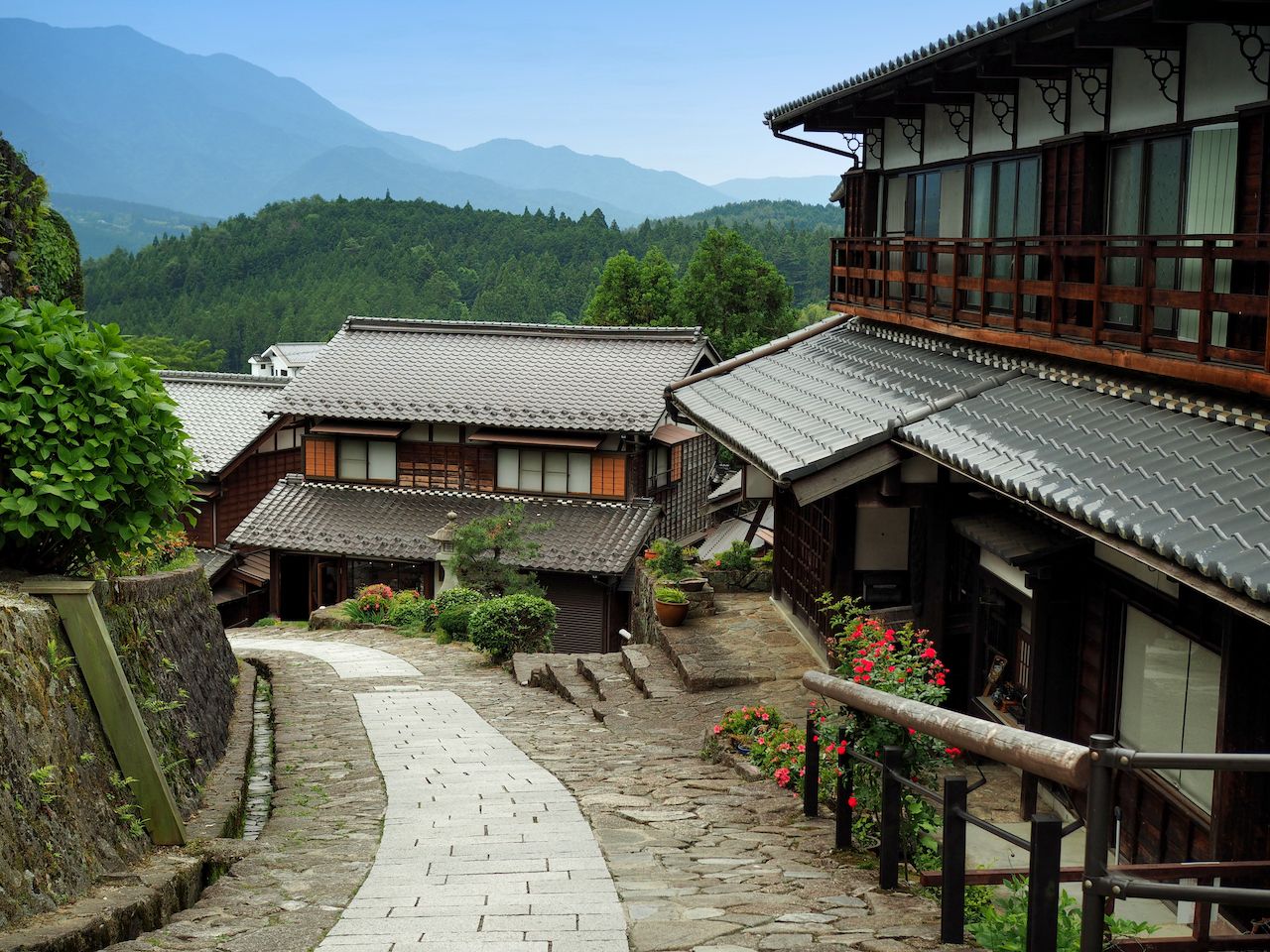 The best way to make a reservation is by using Japan Guest Houses. The guest houses in the Kiso Valley mostly consist of the traditional Japanese inns, and many include breakfast and a multi-course dinner in the price. After a hike, eating a hearty Japanese dinner at the guest house is a great way to finish the day.

Nedoko in Magome is conveniently located near the tourist information office and has some of the most affordable rooms in town. The ryokan has a comfortable communal area, great for lounging after a day of hiking.

In Tsumago, Hanaya, a 300-year-old ryokan operated by the same family for seven generations, is on the edge of town at the start of the trail. It is in a peaceful location near the river with a hot tub to soothe trail-sore muscles. If you want to stay in the center of Tsumago, the Fujioto ryokan is just off the main street and has a peaceful garden and Japanese-style baths. 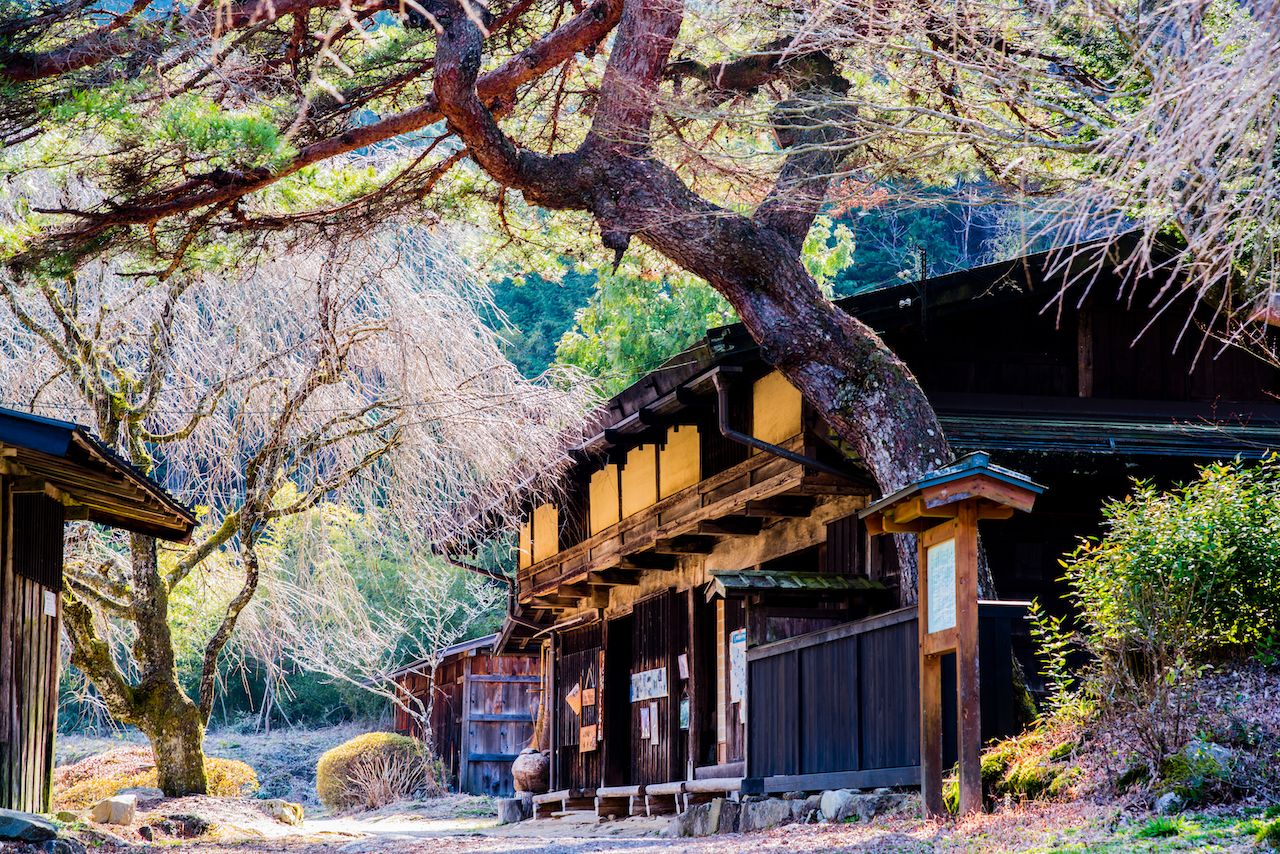 In Magome, there are several restaurants, but only a couple remain open for dinner. Magome-Ya, a large restaurant on the southeast side of town, caters to tour groups during the day but is blissfully quiet in the evenings. Sit by the large windows with views of the valley below. Magome also has a small supermarket and a newly opened bar near the bus stop.

In Tsumago, several noodle shops line the main street. Pick one that is busy with locals and head inside. If you want to try sake, go to the Sabo Art Gallery Ko and sample a flight with the friendly, English-speaking owners.