It’s pretty common knowledge that hippos are indigenous to the continent of Africa, but there’s a population living in a place you’d never expect — Colombia. As in South America. And the root of the hippo problem is even weirder as the country had never been home to a hippo until 30 years ago — all thanks to Pablo Escobar.

Before Escobar died in 1993, the drug kingpin decided to create his own private zoo and smuggled several species from other countries into Colombia. After his death, the zoo was dismantled, and the different species that lived there were dispersed to zoos and animal sanctuaries throughout the country — except the hippos. Hippos are known for their aggressive behavior, with the ability to grow to 8,000 pounds. So the four hippos were left behind, with the expectation that they would die out.

Thirty years later, the ancestors of those four hippos have reached an estimate of 80 to 120 living in Colombia. The population currently spans 13,500 square kilometers (8,300 miles), and estimates show that there could be 1,400 of them living in Colombia by 2034 if a solution isn’t found, according to BBC News. The invasive species are known as “cocaine hippos” due to their origin.

Why are hippos an invasive species?

Hippos are currently considered an endangered species, but the conditions in Colombia make it easy for the population to thrive. African droughts and natural predators keep the population in check in Africa. But Colombia’s moist South American climate and lack of predators make it easy for the population to thrive, causing harm to the environment. There are concerns about displacing Colombia’s endangered native species, and hippo waste is changing the chemical composition of waterways, endangering fisheries. However, illegal fishers have stopped using dynamite fishing because of the hippos, which is better for the environment, according to NPR. 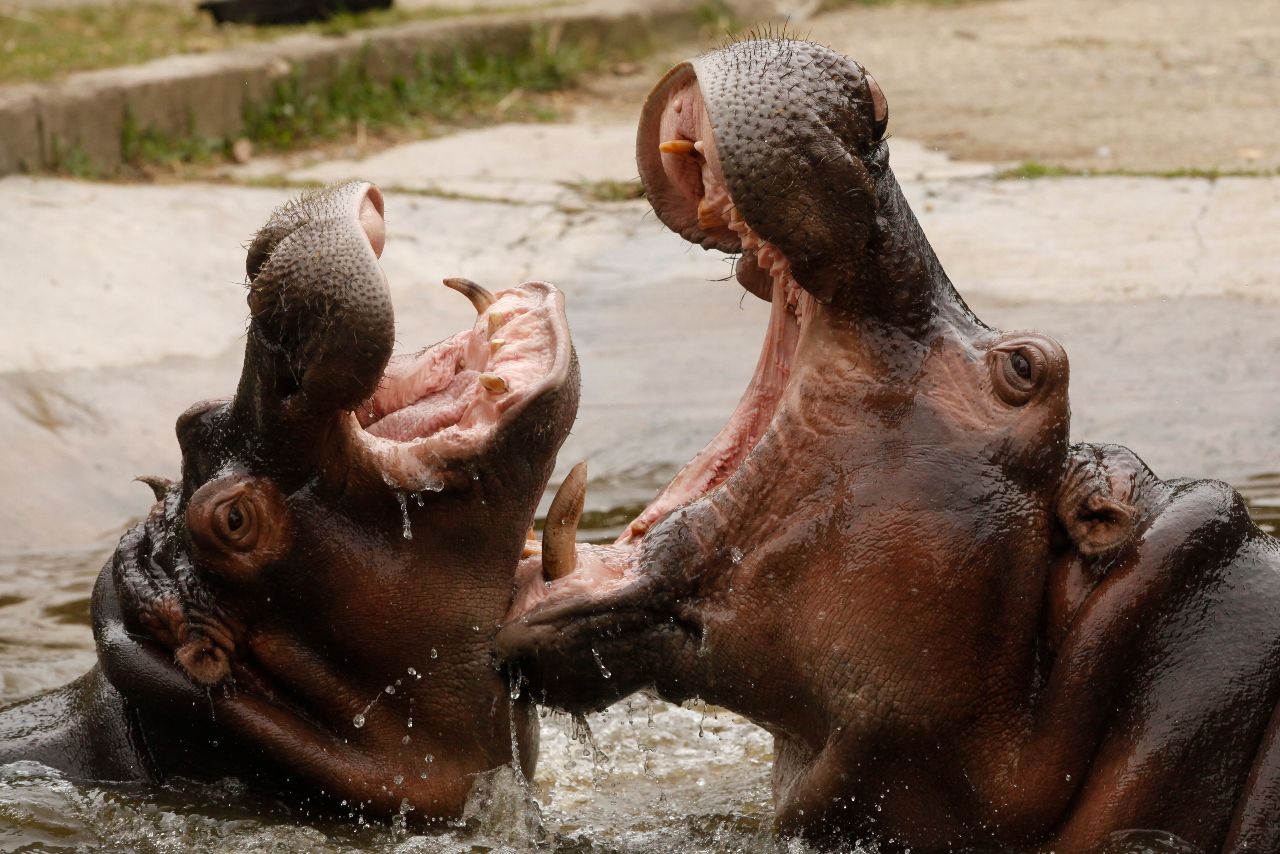 What are the solutions for this massive problem?

Some solutions have been considered, but none of them are without consequences. The first option: scientists suggest culling at least 30 hippos per year to keep population numbers down. The people of Colombia are not interested in killing their foreign neighbors, as they have become a sight to see across the country, and the species is endangered in Africa. While hippos are known for being aggressive animals, resulting in anywhere from 500-3,000 deaths in Africa per year, there hasn’t been a single death due to hippos in Colombia. In a lone incident in 2019, one farmer was chased and severely injured from the encounter. Most of the locals understand the importance of respecting the hippos and maintaining a safe distance. And after the government permitted to kill an escaped hippo from a ranch, the public outcry resulted in a law that makes it illegal to kill the animals, according to The Washington Post. This is also why eating the hippos as a delicacy is largely frowned upon.

Another option was considering selling or shipping them back to Africa. But because the species has lived in the region for so long, they’ve evolved. Their ability to withstand certain bacteria could be dangerous to a population already dying out on the continent, “They are already not African,” Nataly Castelblanco, a Colombian expert in nature conservation, told El Tiempo.

There have also been experiments with sterilizing the hippos, but according to Insider, the treatment costs can reach $50,000. It’s difficult to keep the hippos under sedation due to their size, and the government would have to round up enough of them for the experiment for it to work.

In the meantime, a trip to Colombia could be worth the trip if you want to marvel at the beauty of Colombia’s giant friends.

Budget TravelYou Can Visit the Colombian Amazon for as Little as $50 Per Day
Tagged
News Wildlife Colombia
What did you think of this story?
Meh
Good
Awesome