The old people under the sun shelter were not feeling @bodybyjulezzz*.

“The hell she doin’ over there?” a clearly overheated older man in a purple hat asked his wife. “Filming a commercial?”

“She’s an influencer,” I told him, unrequested, while I stood behind him and watched.

“A what?” he said turning around.

“An influencer. She’s filming that for Facebook Live and putting it on her feed,” I told him.

“Ohhhhh,” he said, pretending to have any idea what I was talking about. “Why’s she gotta do it here?”

@bodybyjulezzz had conveniently set up shop right between the sun shelter and Rainbow Bridge, an iconic red rock bridge near Lake Powell on the Arizona–Utah border. Ideally, the sun shelter provided a place for overheated hikers to get a break from the desert sun and enjoy this wonder of nature. Today, it was a place to watch a fitness “model” in a sports bra hock packaged salads in front of an iPad.

“We’re out here enjoying this beautiful nature with Greens-to-go!” she told whoever was on the other side of the iPad. A crew of her friends were having a staged impromptu dance party behind her. “Great, healthy meals, perfect for hikes! How you liking that kale-quinoa, Callie??”

“Wooooo!” a blonde who looked like she’d never seen a carb yelled at the iPad. “QUINOAAAAA!!!!!!”

This is getting “back to nature” in the age of social media, where “influencers” come to beautiful places and convince us we want the exact same pictures they have. Like lemmings we follow en masse, experiencing the wonders of nature through the screen of a smartphone.

The results are places that were once testaments to the beauty of life reduced to pens of zombies clambering for the perfect picture. Turning some of the most scenic locales on the planet into giant frauds.

It’s hard to breathe in the beauty when people are breathing down your neck. 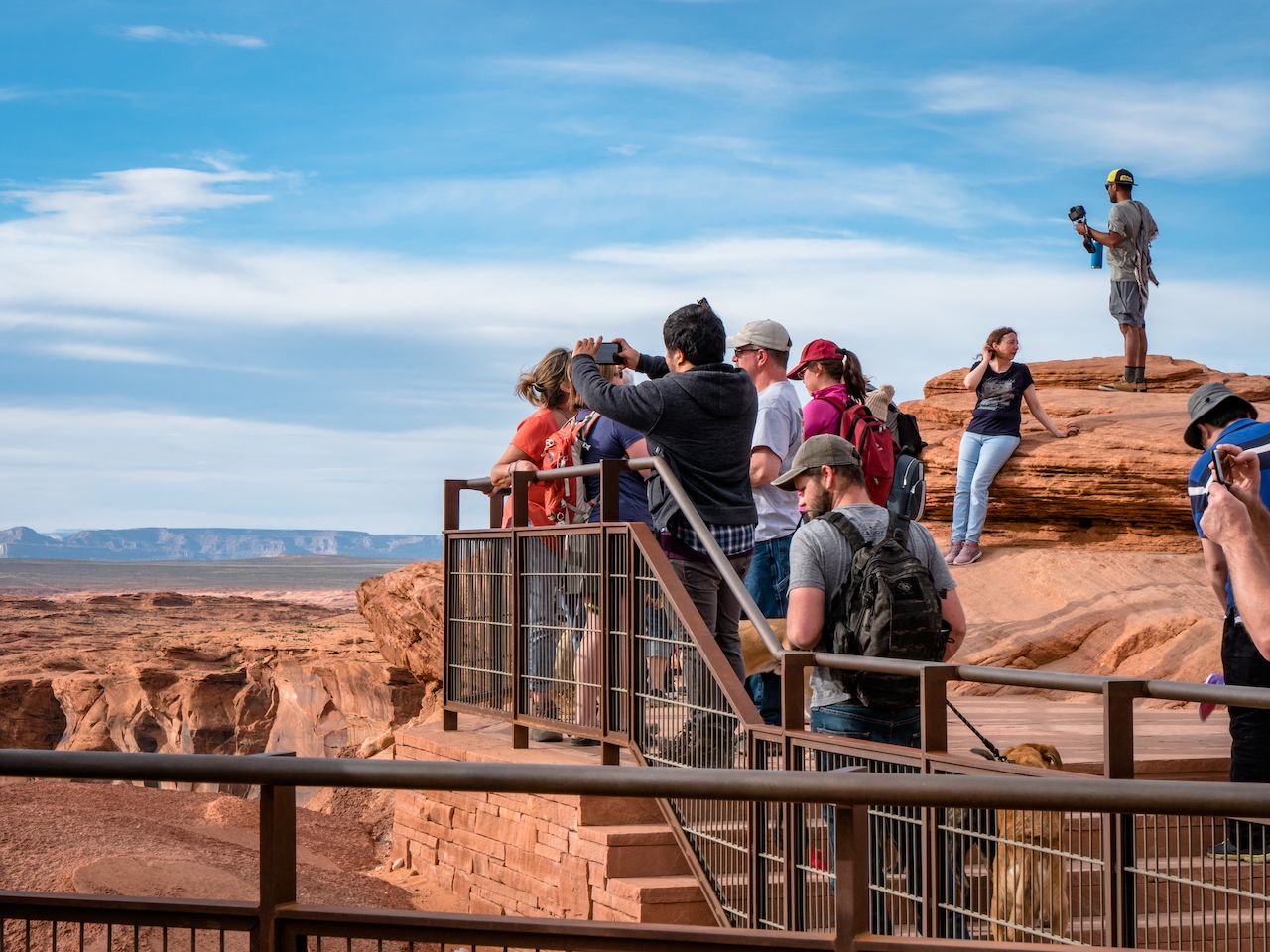 Before my afternoon hike to see @bodybyjulezzz, I’d paid a visit to nearby Horseshoe Bend. For the unfamiliar, Horseshoe Bend is a spot where the Colorado River does an impressive 180 through towering red-and-green canyons. It’s often mistaken for being in the Grand Canyon, but it’s actually just outside Page, Arizona.

“Last time I was here, there wasn’t even a sign; you had to find it yourself,” another travel writer told me as we waited in a line of 15 cars so we could pay $10 to park in the vicinity Horseshoe Bend. “Now there’s a visitors center.”

A short hike up a hill and back down had us in a constant stream of people, all hoping to stand on the ledge above the canyon and take in the beauty. The ledge, however, looked more like a bar with $2 drink specials. People were standing three deep to get selfies with the Bend.

When I finally reached the front, I took a couple pictures of the scenery, then stood over the river and tried to comprehend the glory of the desert. Within 30 seconds I was interrupted.

“Hey, ah, would you mind moving, bro?” an Instagram husband asked me. “You got your shot. My girl needs to film here.”

Appreciating nature one selfie at a time 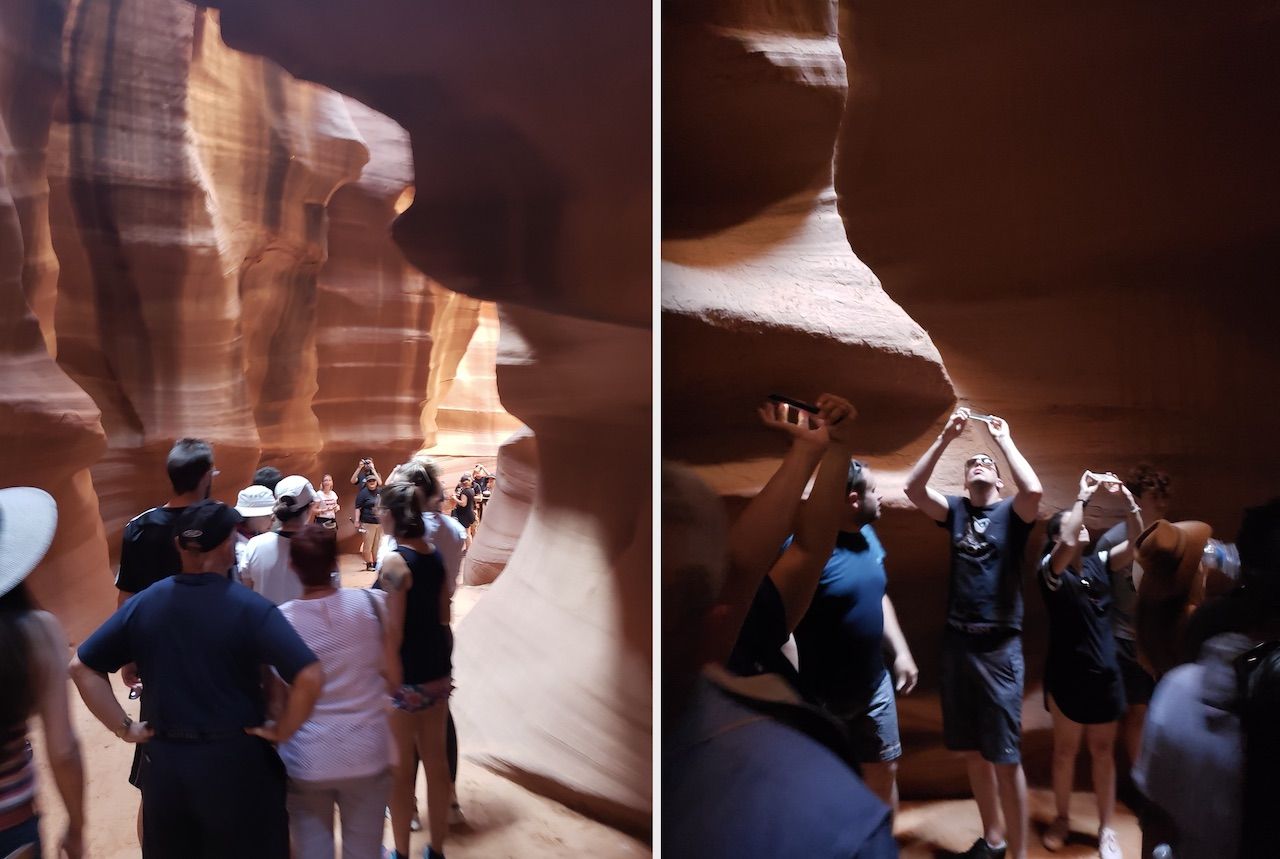 Later that afternoon we had a 1:30 PM appointment to tour Antelope Canyon, a red rock slot canyon where sun filters in a few hours a day, creating one of the most wondrous sights in the desert. You may recognize it from your Windows screen saver, or roughly 27,000 Instagram feeds.

You have to make an appointment to “hike” Antelope Canyon because demand is so high. I put “hike” in quotes because it’s more like waiting in line for a Disney ride, except there’s no Disney ride at the end.

The tours start in staging areas that look like remote bus stations, where a few hundred people sit crammed on stiff benches under sun shelters. They will wait there for an hour or more before their tour starts because if you’re not at the staging area 30 minutes early, your spot gets sold, and you get no refund. Sounds harsh, but let’s not start telling the Navajos about getting a bad deal.

The trip begins with a 15-minute dusty ride in the back of a five-ton truck, where you will sit shoulder to shoulder with a family of eight from either Ogden or Shenzhen.

When we finally arrived at the entrance to the canyon, the parking lot was filled with rows of similar five-ton trucks, each one bringing about two dozen more people into this tiny little canyon. Danny, our Navajo guide, took us to the back of the line, which extended about 40 yards out of the entrance. 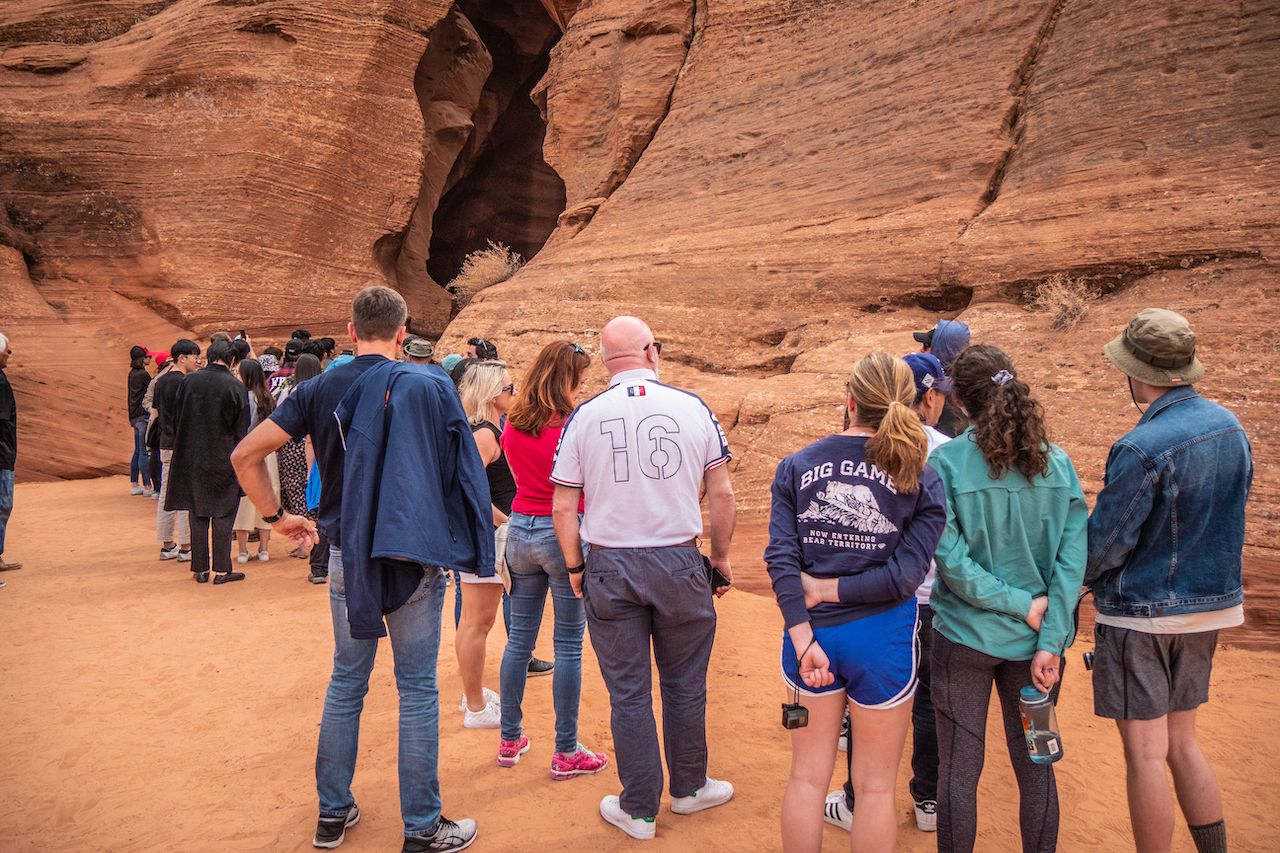 “No, it’s the line to walk through,” he said. I brushed it off as semantics. It was not.

Inside, I saw no end to the line of people, which in many places took up the entire width of the canyon in an unmoving mob. Nearly all of them had their phones pointed to the top of the canyon; none looked anywhere but straight into their screens. Every few seconds, the mass of humanity would move, and just as soon stop.

“Hold on,” another guide told me as I attempted to ease my claustrophobia and step into one of the canyon’s larger, open areas. “These people need to get a picture in here.”

I waited while a family posed in a sunbeam like they were the only people for miles. Then another family followed, then a young couple. All that was missing was a drunk in a red suit asking them what they wanted for Christmas.

“Watch this!” our guide said when the room cleared. He grabbed some red sand from the ground and threw it up in the air like LeBron at pregame. The sun filtered through to create the same image you’ve seen online hundreds of times.

“Oooh, can you do that again?” a girl in our group asked. Danny obliged. Then he obliged again, until everyone had the right shot. We probably held up the line for five minutes.

This continued as I followed behind a man who looked to be FaceTiming his girlfriend, largely ignoring the canyon. He wasn’t the only one talking into his phone, some narrating their Snap stories, others doing live feeds. A canyon full of celebrities in their own minds, completely oblivious to the nature they waited so long to see.

“If you stop right here,” Danny said, “you’ll get the picture on your screen saver.”

He asked for my phone and took what was a pretty good replication of a shot I’m used to seeing covered in Word icons.

“If it’s on my screen saver, what do I need with this?” I asked him.

And this is where we are now: Traveling thousands of miles and waiting in an hour’s line to have someone else take a picture I’ve already seen.

An hour of shuffling through Antelope Canyon later, we finally made it out the other side. Then were asked to go back in so a photographer could get a picture of us coming out. After a few minutes enjoying the sun I braced myself for another line to walk back through to the truck. But without stopping for everyone’s selfies, we made it back in five minutes. 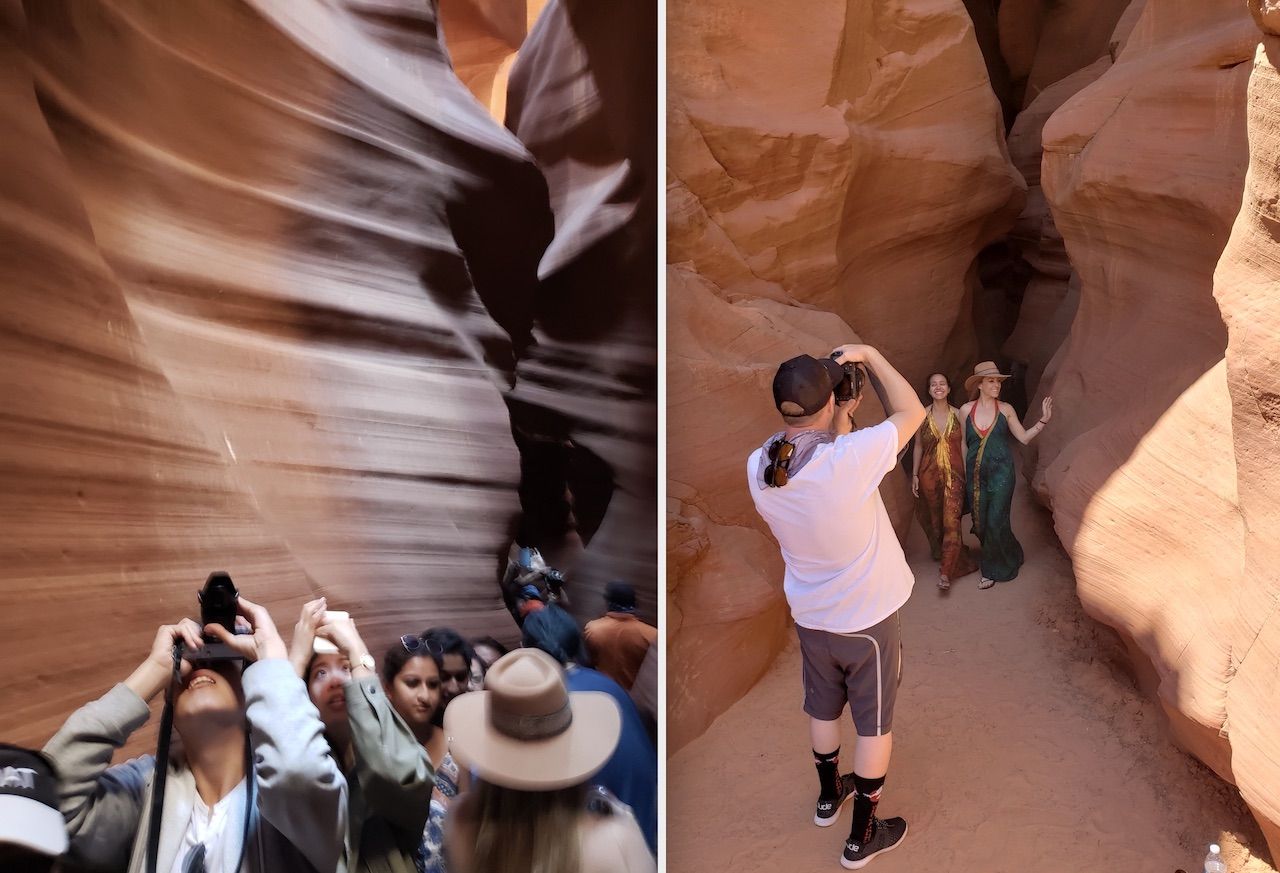 Back at Rainbow Bridge, @bodybyjulezzz was plugging some spiked seltzer water while The Chainsmokers echoed through the canyon.

“How long’s she gonna do this for?” another old man asked me.

“What’s up! Yeah, it IS beautiful here. Nature is the best!” @bodybyjulezzz shouted into her iPad.

“Probably a while, she’s talking to her followers now,” I said.

“Well then, let’s go back,” the old man said to his wife, and seemingly the rest of the old folks sitting under the overhang. “This ain’t what we came out here for.”

They picked up their water bottles and fanny packs and made their way back through the desert to the lake. @bodybyjulezzz didn’t even look up.

*“Influencer” and product names have been changed, but the story is true here, and unfortunately, pretty much everywhere.

NewsHorseshoe Bend in the Grand Canyon To Impose Entrance Fee, Thanks To Instagram
Tagged
National Parks
What did you think of this story?
Meh
Good
Awesome