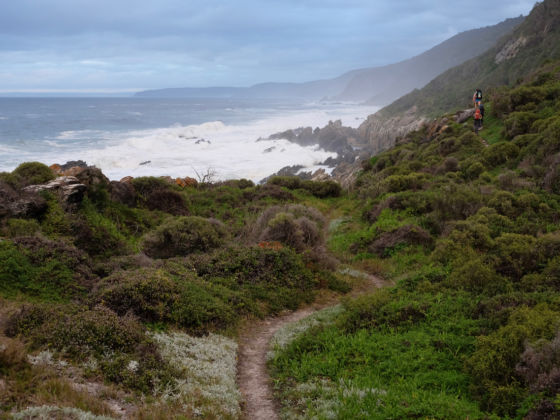 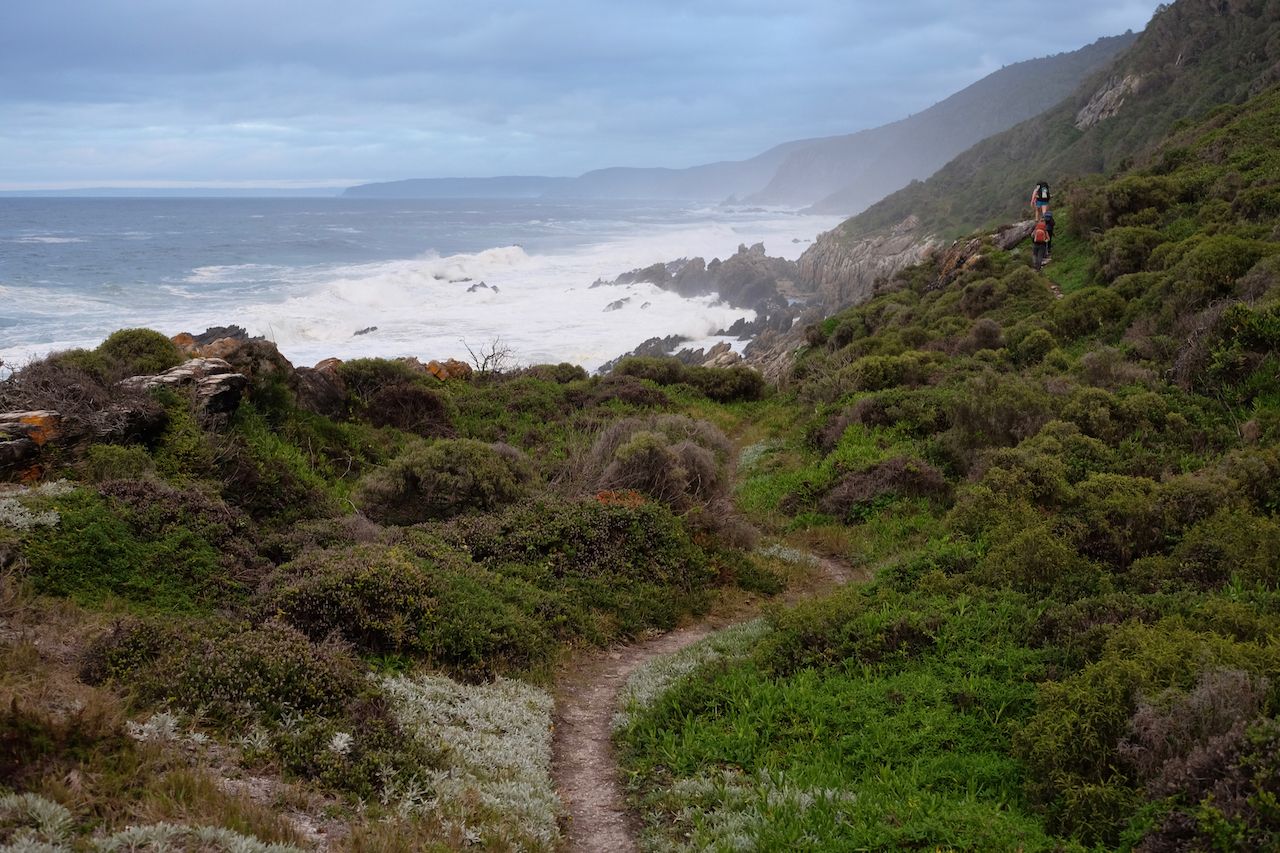 Inside the Otter Trail: is this the world’s best 5 day hike?

Text and photographs by Andrew Thompson


The Otter Trail lives up to expectations. Only 12 hikers a day are allowed on this South African trail, to trek along the rugged and spectacular Garden Route coastline — between four different huts set in idyllic locations.

Despite some tough terrain, no electricity, and a few challenging river crossings, the trail sells out a year in advance and has become the stuff of legend. Those lucky enough to secure a spot quickly learn why it might just be one of the best multi-day hikes in the country, if not the world. 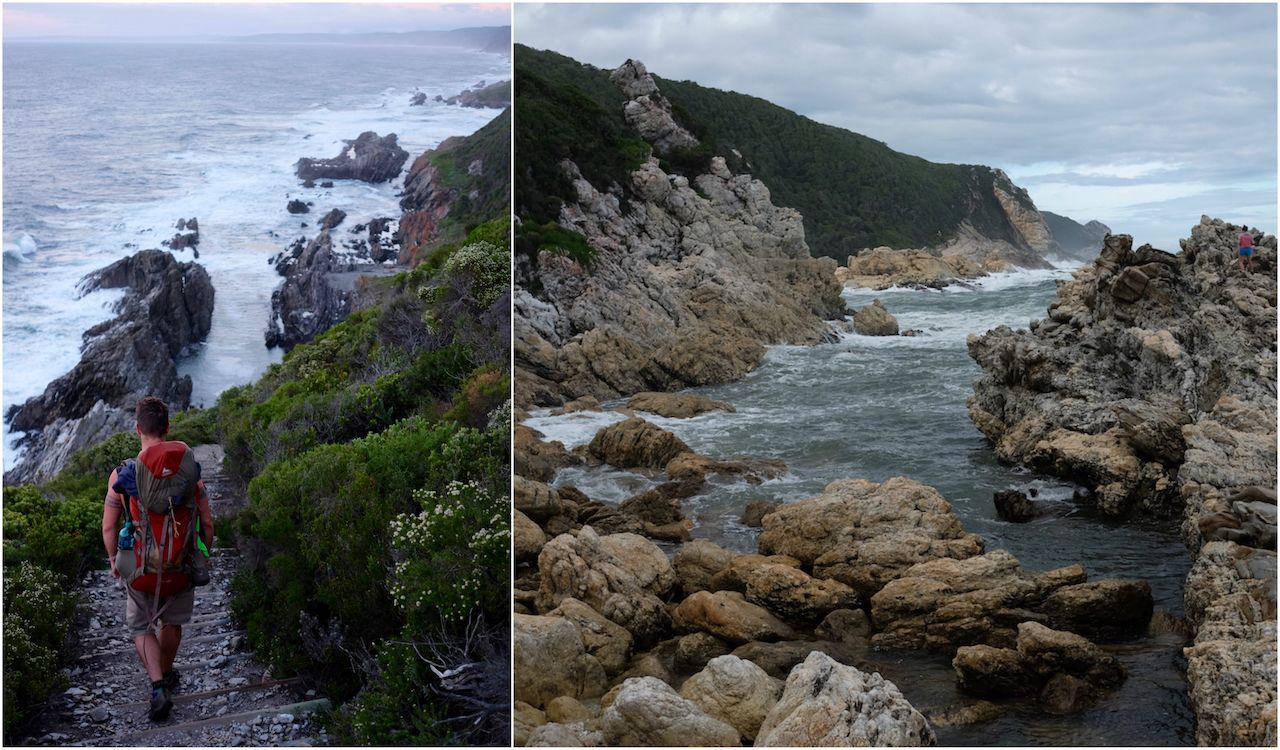 Our 370-mile commute from Cape Town meant that by the time my companions and I checked into the starting point of the Otter Trail, the sun was already dropping. And thick clouds had been growing overhead throughout the drive.

Park officials seemed eager to call it a day, and after a rushed briefing about which water we could drink, and what time to cross the rivers, we were left to our own devices. A quick weigh-in on a scale in the corner showed our bags ranged from 28 to 50 pounds, but it was too late to do anything about it.

Moments later we began the rapid descent towards the coastline. Though in thick forest, raindrops started making their way through the canopy. By the time we reached the clearing alongside the ocean, we were fully exposed to a steady downpour — for which we were woefully unprepared.

As we wandered off course over slippery rocks, water seeped through my shoes, and the temperature continued to drop, I wanted nothing more than a warm fire, a change of clothes, and a glass or two of the wine taking up space and adding weight, in my only water bottle.

The day dawned cool and dry. I slipped out of the little hut and made my way to the rocks, as the first light washed over the ocean. A small bushbuck tiptoed gingerly over the rocks. For a few fleeting seconds, I spotted an otter battling the turbulent currents, its head bobbing through the white water perilously close to the jagged rocks.

The rest of the day was less tranquil. The hills we’d been warned about materialized almost immediately. They rose and dropped from the beaches with alarming regularity, and with each step, my backpack grew heavier and more uncomfortable.

And yet, with every cresting of a seemingly impassable hill, we encountered magnificent new views along the dramatic coastline that kept us going.

By day three, we all knew who was in charge — and it wasn’t us. The previous day’s hills still lingered in my mind as we set off early to beat the tides at our first river crossing. With no real idea of how long the hike to the river would take, nor how impassable it would be at high tide, we played it safe. We scuttled across the rocks, up sandy embankments, across sandy river beds, and over rocky trickles of water emerging from the forests.

After several kilometers, a hill rose up before us to drain the last of my energy — which was instantly restored when we saw what lay over the summit: two huts overlooking the emptying riverbed, which was easily crossable at low tide.

It was only mid-morning, and so we made coffee on our small gas stoves and relaxed around the camp until the riverbed was too intriguing not to explore.

If the first half of the trail causes dread because of the hills, the second half does the same because of the rivers and long distances. Bloukrans river, its inland bridge famous for a notably high bungee jump, is impassable at high tide. As a result, hikers rise early to reach its banks in time for safe passage.

We woke up shortly before sunrise and set off with the aid of headlamps. As the coastline lit up with the morning light we marched on in near total silence, pausing only occasionally to take in the views.

Whether it was strength gained on the previous day’s climbs, the reduced weight in our backpacks, or the concern about the river, we reached the river with ample time to spare. And even as the last of the hikers made their way across, it was nothing more than an ankle high trickle.

Just an hour or two later, it would turn into a raging torrent — but by that stage, we were already settling down for the evening on our final night in the picturesque beachside huts. We whiled away the afternoon on a small balcony and were treated with a final and fleeting sighting of a Cape Clawless Otter after which the trail was named.

The final day of the Otter Trail is just 6 miles of easy terrain, and after the sharp ascent to the view point above the previous night’s campsite we moved on towards the finish line.

It’s a strange feeling to be nearing the end of a grueling challenge, and yet not wanting it to end. The five days without mobile phones, electricity, and no human contact other than the eleven people on this adventure left me dreading reintegration into the real world.

As we reached the end of the trail the views continued to improve and my legs felt stronger than ever. I thought about how I didn’t really want to stop walking. But as we rounded the final corner to a panoramic view of Nature’s Valley — and the word “BEER” and a large burger drawn in the sand below by our fellow hikers who’d pushed ahead — I was very ready to begin the reintegration back into civilization.