Just over a billion years ago, North America’s center was rifting apart. Lava erupted across the land, setting down ultra-hard rock — ultra-hard rock that would have to escape glaciation. Isle Royale did just that, becoming the largest island in Lake Superior. It’s 45 miles long by nine miles wide, a dense boreal forest growing along a rugged shoreline, and it remains a vast wilderness set aside for our enjoyment.

Isle Royale National Park in Michigan is one of the least-visited national parks in the system. It’s difficult to get to for a number of reasons — location, time, money — and its main season is incredibly short: April 16 through October 31. If you’ve been looking for a fall road trip away from the humans, you’ve found it. From aspen groves turning gold to the chilly, empty shores of Lake Superior, let’s get planning. 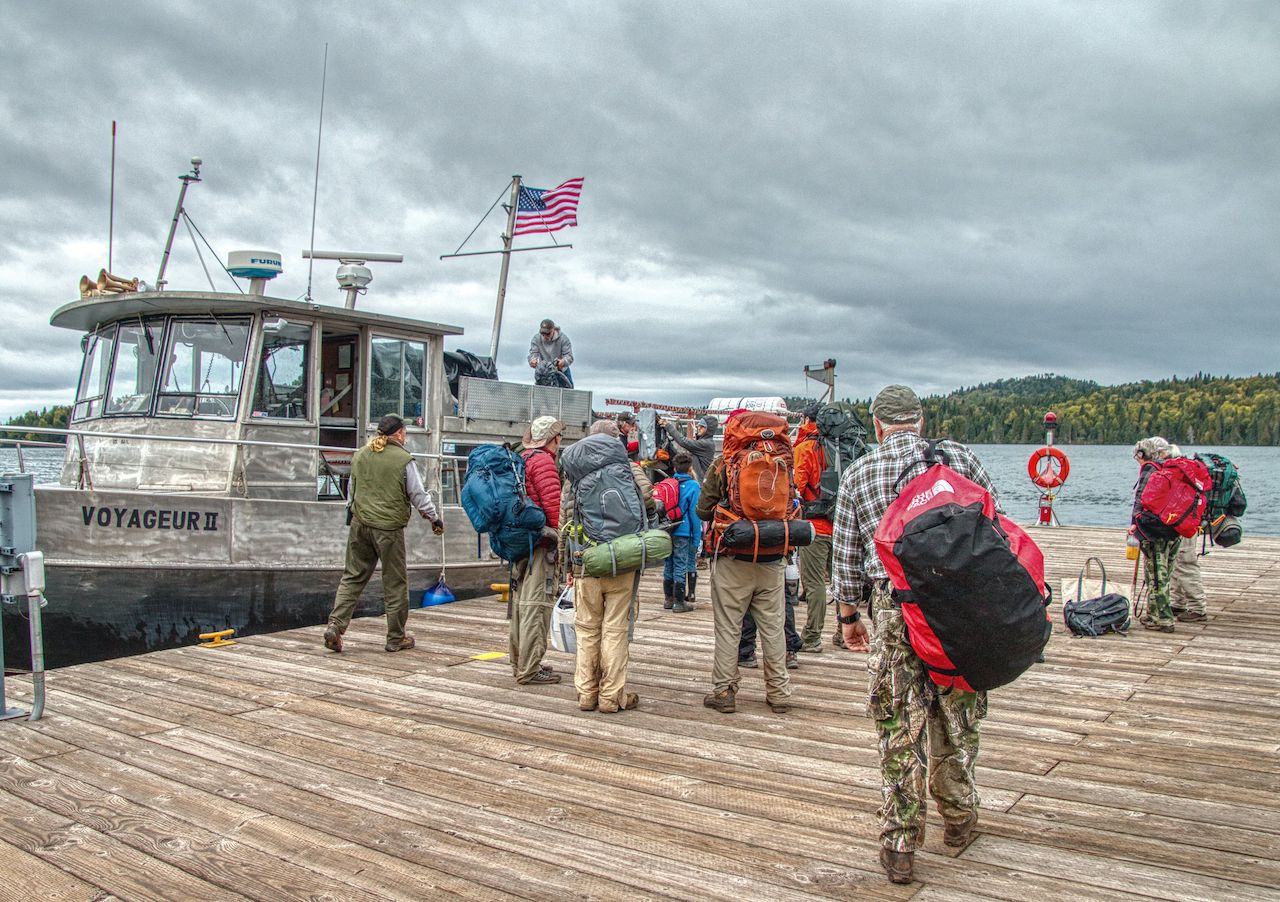 Every visitor to Isle Royale comes via boat or seaplane. The most popular option is — was — to take a ferry from one of the designated launching points: Houghton, Michigan; Copper Harbor, Michigan; and Grand Portage, Minnesota. That being said, all ferry service has been canceled for 2020, set to resume in 2021.

That leaves, for 2020, Isle Royale Seaplanes. Flights originate from Hancock, Michigan, along the Keweenaw Waterway, and from the Cook County Airport in Grand Marais, Minnesota. A round-trip ticket is between $320–330. Consider it paying for a more exclusive park experience!

Note: The ferries aren’t a ton cheaper. Isle Royale Queen IV is $136 per adult per round-trip; other ferries have similar prices. In addition to one of the least-visited, Isle Royale is also one of the more expensive parks to visit. 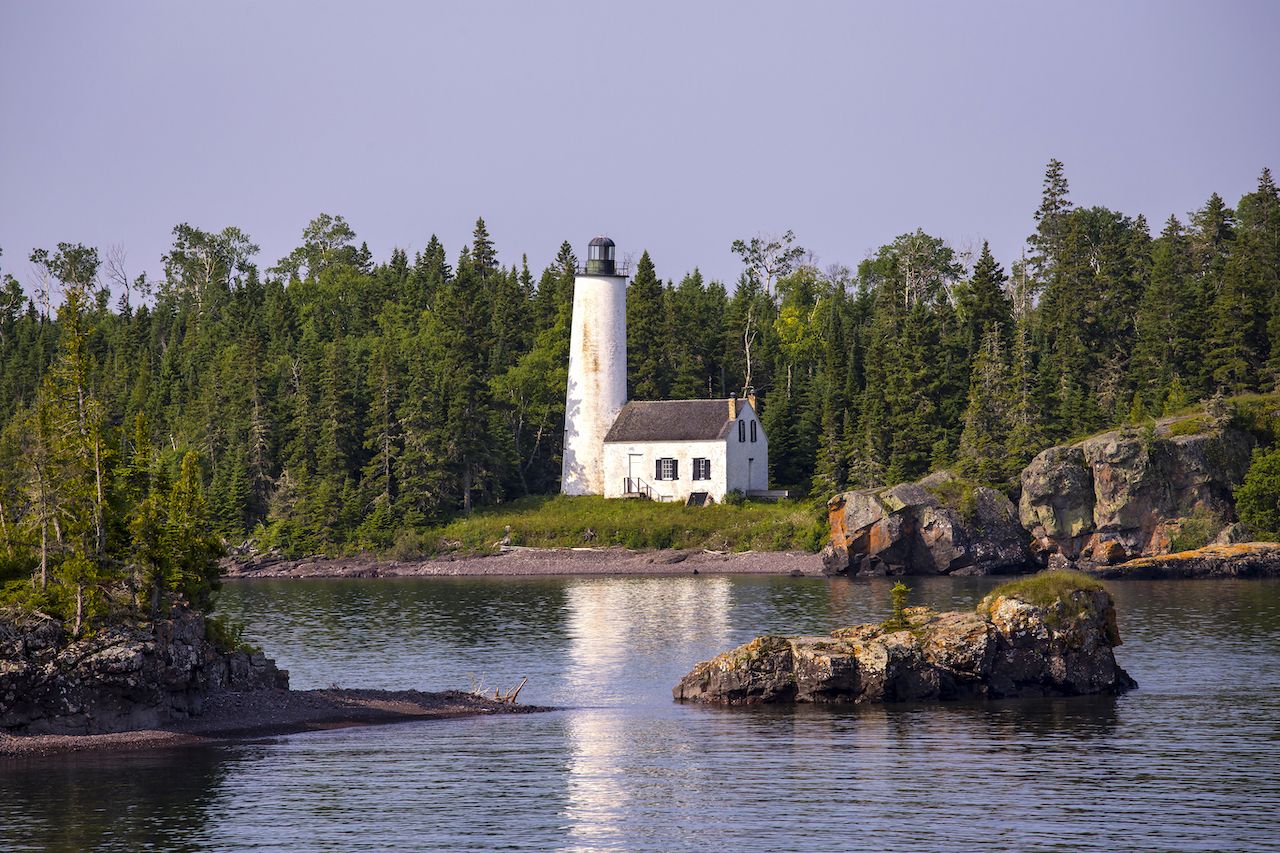 There are two visitor centers on either end of the island — one in Windigo and one in Rock Harbor. Your ferry will land at one of those two destinations, and where you go from there is up to you. From here, there are really two main ways to see the park: hiking or paddling.

The island — again, it’s 45 miles long — is absolutely criss-crossed with trails and campgrounds. You could easily spend a week camping, backpacking, and hiking from end to end or setting up shop in one post and exploring in a radius around your makeshift home. In normal years, you could take it easy at Rock Harbor Lodge — yep, there’s one “hotel” on the island — and take day trips on foot from there as well. (Alas, the lodge is also closed.)

Bonus: The NPS has clocked trail mileage between campgrounds for you if you like to wander. 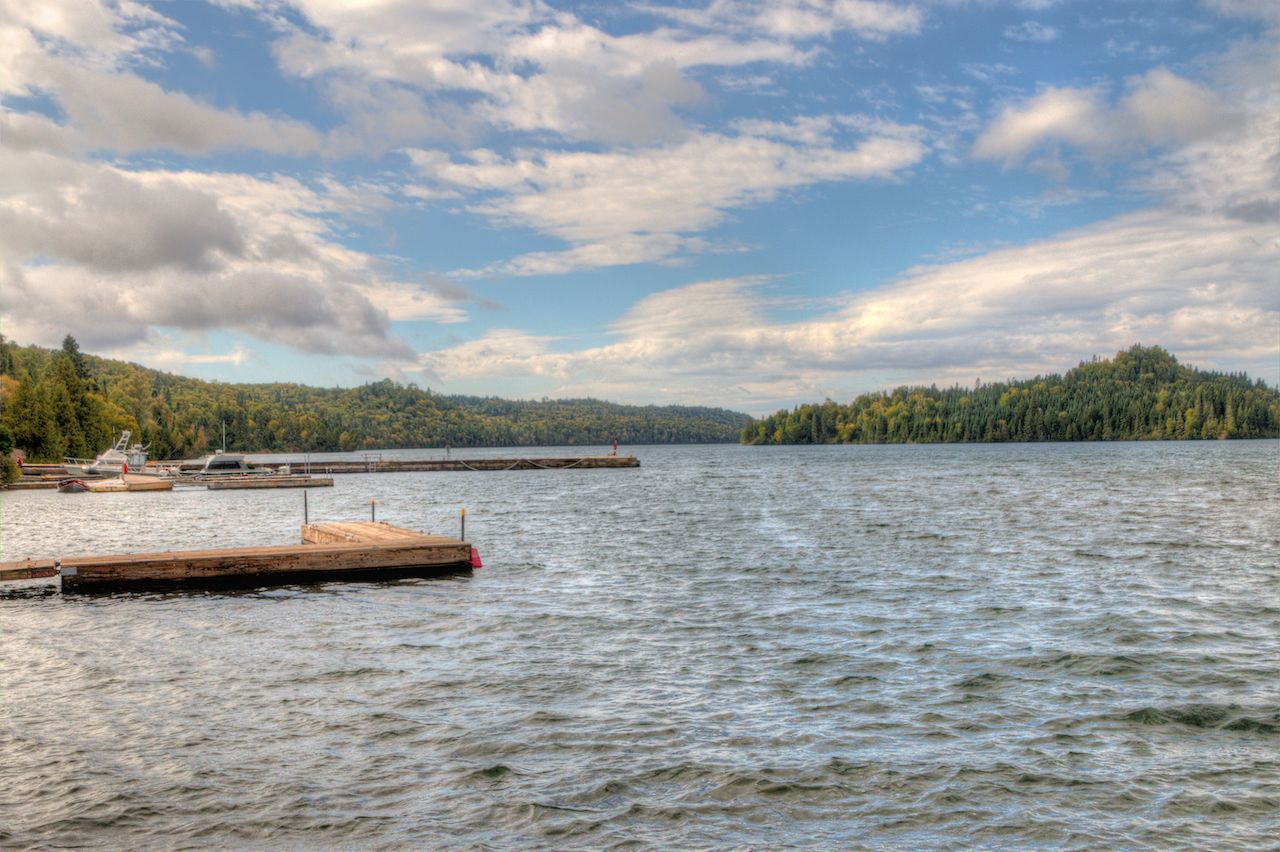 You’d be remiss to be in one of the country’s few island national parks and not see it by water — in fact, you could use paddling as your main mode of transportation. But know that Lake Superior is no puddle: Recreational kayaks are not appropriate here; sea kayaks are recommended, and they should be at least 15’8″ to 19′ long for open water. Canoes should be at least 15’ long.

That being said, if the choppy waters of Lake Superior make you uncomfortable, the park has plenty — plenty — of inland lakes, little bays, and calm waterways in between the tiny, tiny islands on the park’s east (Rock Harbor) side. Take a look at the map, and plot out campsites you may want to paddle to or sites you’ll want to see. You could spend days paddling between spruce groves and aspen and never get bored (and, hopefully, never see another soul). 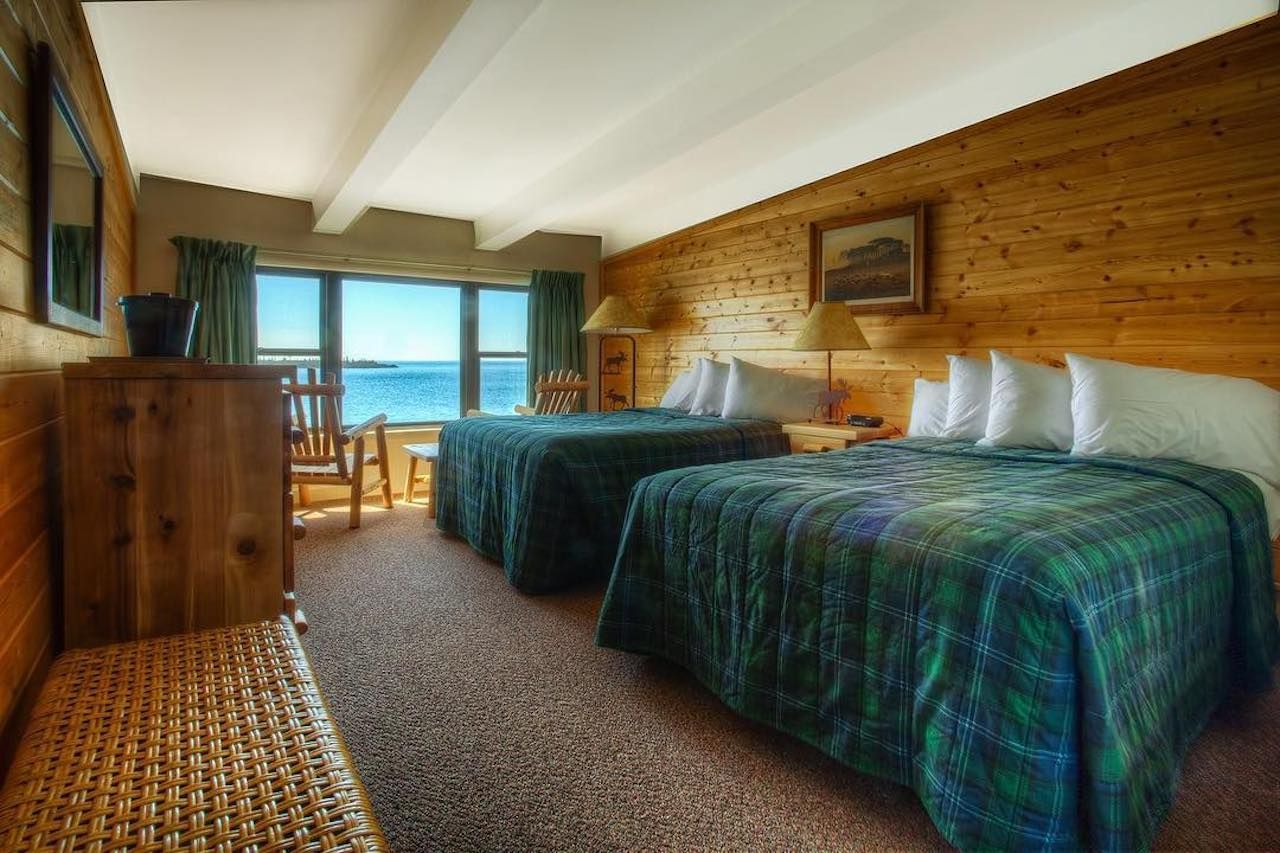 The aforementioned Rock Harbor Lodge, on the popular Rock Harbor end of the island, has lakeside lodge rooms, cottages, and “camper cabins” available for reservation. It’s got a restaurant, gift shop — all the fixings — and it’s a quick walk to the visitor center, where they can hook you up with a canoe or kayak. But since it’s closed for 2020, you’ll definitely be camping (and Rock Harbor will be far less busy).

Luckily, the island has 36 campgrounds, the majority on the Rock Harbor side of the island. Some require a watercraft, and all offer tent sites, outhouses, and a water source. They’re first-come, first-serve, and you can get a permit (free for parties smaller than six) in Rock Harbor, Windigo, or aboard the Ranger III. There are inland lake campgrounds, trail-accessible campgrounds, and Lake Superior campgrounds. Backcountry camping, or cross-country camping as it’s referred to in the park, is allowed in designated areas with a special permit. 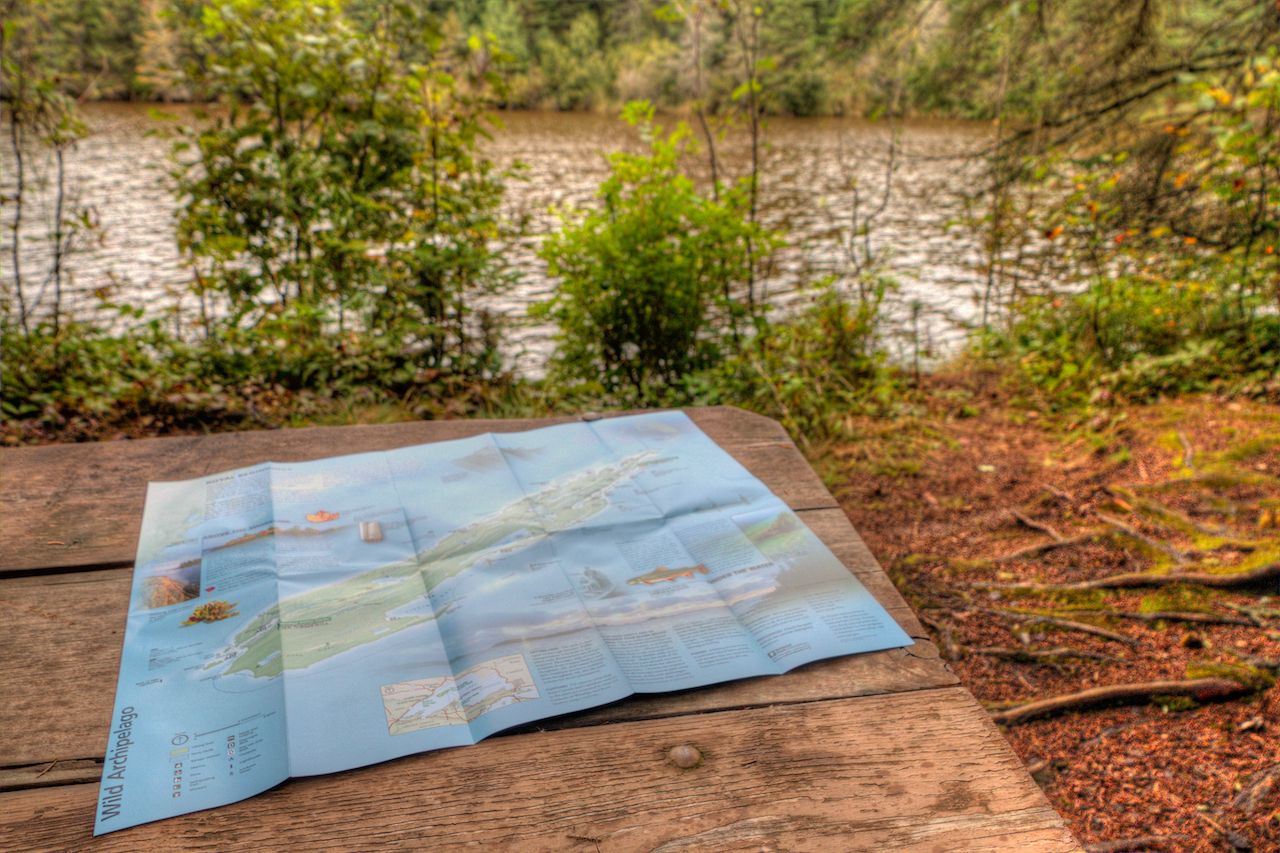 Isle Royale National Park is about simply being. Seeing. Experiencing. Getting away from it all. There are no epic mountains to climb, no geysers to time, no shuttles to cramp into.

While there may be no 14ers, the terrain here is rough and uneven. Bring sturdy shoes, and you could find yourself in a wilderness like you’ve never experienced.

On the Rock Harbor side, check out Suzy’s Cave, a 3.8-mile loop that leads you to a wave-washed cliff and an inland sea arch formed thousands of years ago. Listen for loons and moose, and get lost in the canopy of fir and spruce. For something longer, scope out the 10-mile Mount Franklin Trail, leading you to an overlook that gets your eyes all the way to Canada.

The Greenstone Ridge and Minong Ridge Trails lead all the way to the Windigo side. Greenstone Ridge is the backbone of the park, and it takes you to Mount Desor, the highest point on the island, along exposed bedrock and blueberry bushes and through miles and miles of boreal forest. Look to these trails if you want to hike the entire island.

On the western side (Windigo) — formerly a private retreat for wealthy Minnesota businessmen — check out the Huginnin Cove Loop, a 9.6-mile trail that weaves through wetlands, along planked cedar swamps, and to Superior’s shoreline. The Minong Ridge trailhead is on this side of the park as well.

Hint: The higher your trail, the fewer the mosquitos, which can be a serious issue come May and June.

The main island is the draw, but there are 450 (450!) smaller islands surrounding it, making for an endless paddling maze full of solitude and beauty. If you’re here for the paddling, you’ll probably want to land on the Rock Harbor side, choose a campground or two, and spend your days navigating to picturesque islands you can get all to yourself.

The top of your list should be Raspberry Island, a short ride away, where you can spend a few hours exploring the boreal forest, fragile bogs, and the rocky shores before you get back in the water. Tobin Harbor is another great spot, known for its calm waters and immaculate bird-watching opportunities. Keep your eyes and ears open! 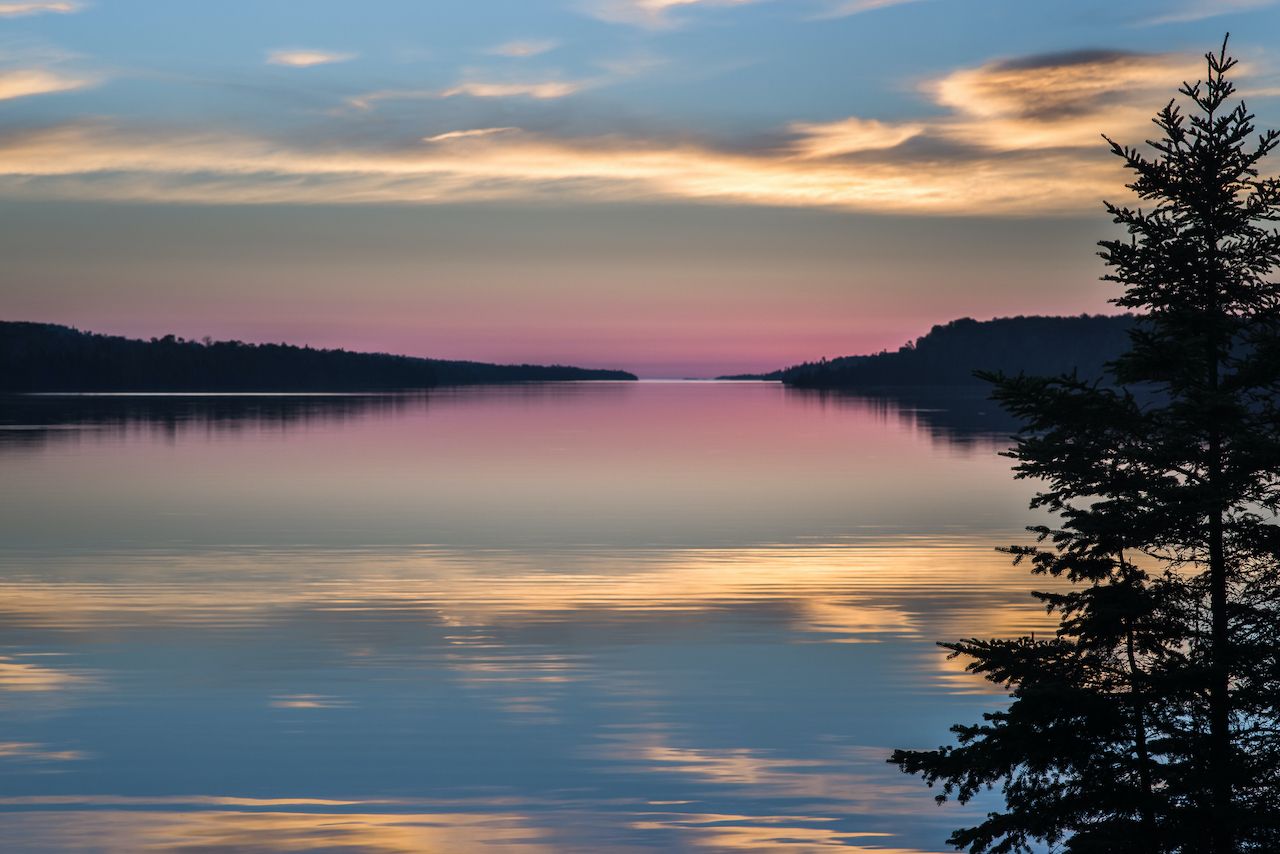 Bug spray. And some more bug spray. And plenty of layers and rain gear. Heat and mosquitos are the two downfalls of this otherwise pristine wilderness, though if you go in fall — early fall is best to avoid chillier temperatures — you won’t have as much of a problem with either of those. You just might need a heftier sleeping bag.

Depending on what you’re planning on, you’ll want to bring everything from full-on backpacking gear to a small suitcase and your wallet, living solely off the lodge’s restaurant and Rock Harbor’s general store. But either way, make sure you pack good hiking shoes, layers for heat and layers for cold, and a big ol’ water bottle. You’ve got some adventuring to do.

*Note: This article has been updated to reflect that all ferry service and the lodge is closed for 2020. A prior version of this article stated certain facilities were still open and running.

Why It’s Worth Stopping in Dearborn, Michigan, Just for the Lebanese Food

Watch: How To Hunt for Glow-in-the-Dark Rocks Around Lake Superior