Almost everybody has heard of Jamaica’s most famous food: jerk. While jerk usually centers around a protein like chicken or pork, Jamaicans don’t stop there — they season veggies and fruits with jerk spice, too. Jerk is pungent, peppery, and spicy, so it often needs an accompaniment to take the edge off. Enter another beloved Jamaican food, this one being something that people unfamiliar with the island’s cuisine might not have heard about. Its name recalls the fun times one has when it’s served: festival bread, otherwise known as fried dough.

First and foremost, though, it’s important to understand what’s meant by “jerk.” There are a few theories about where the famous spice blend, made primarily with allspice and Scotch bonnet peppers, gets its name — and no, it has nothing to do with bad behavior. Some say it’s derived from how a cook turns the meat in a marinade, or how you can tear (or jerk) a strip from a larger piece of meat. Others say the English word is derived from the Peruvian term charqui, which means dried strips of meat. And indeed, charqui sounds a lot like the popular on-the-go snack, jerky.

Spice is an important part of jerk. There’s evidence that the indigenous Arawak people, who lived in both what we now called Peru and Jamaica, preserved meat in the jerk style of spicing and then smoking it. The Taíno indigenous people on the island also cooked this way, and specifically used the wood of allspice trees and flavor from allspice berries. The Maroons, enslaved Africans and their descendants in Jamaica, also cooked jerked meat, usually inside banana leaves. The Maroons typically added spices like hot peppers, thyme, and ginger.

Today, elements of these historic cooking traditions are seen in modern jerk with the addition of festival bread.

What is festival bread 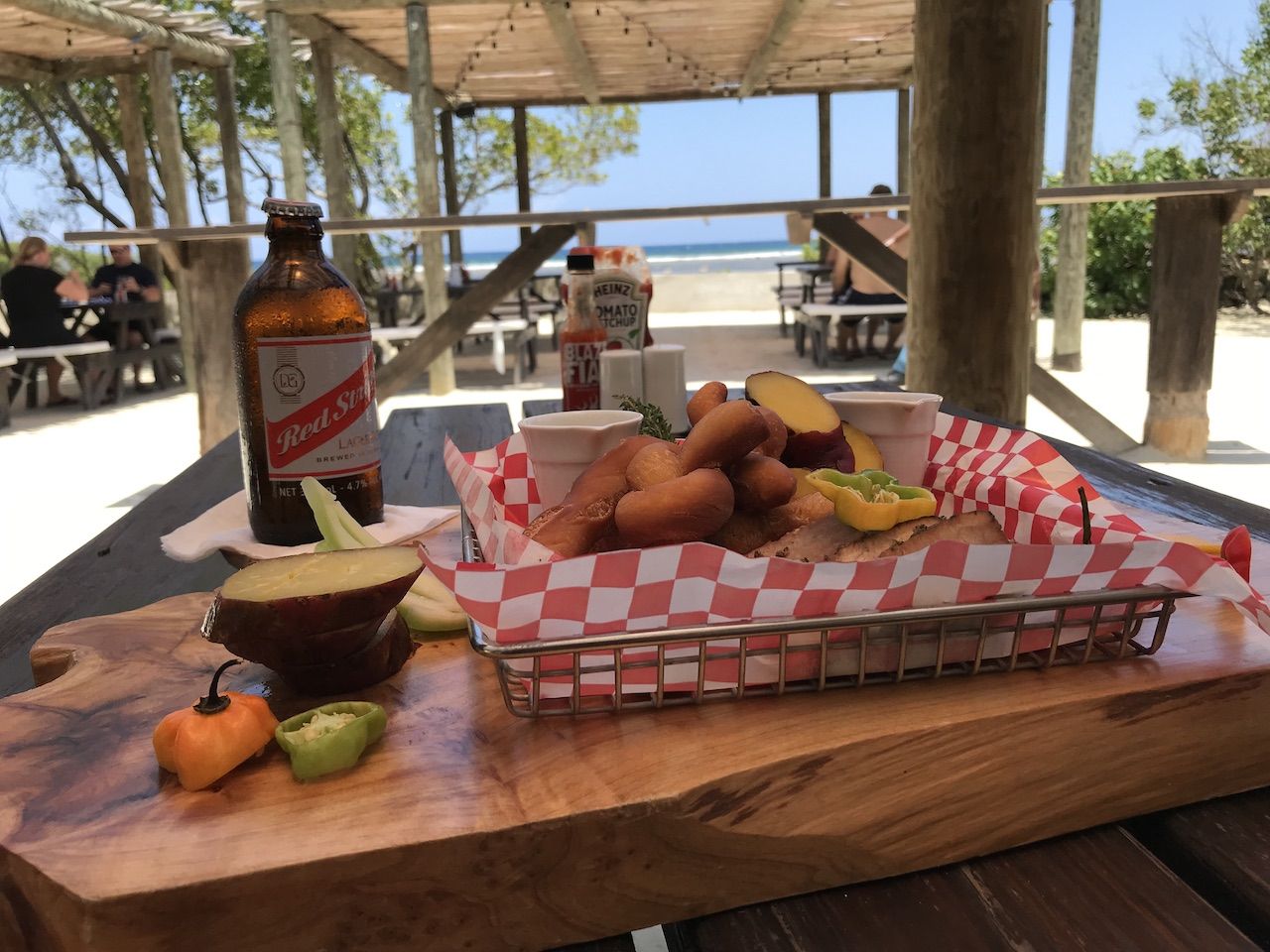 No trip to Jamaica is complete without eating jerk. And to enjoy this dish properly, you should accompany it with festival bread.

“Jerk is deliciously spicy, so festival, which is a mix of cornmeal and all-purpose flour deep-fried in oil, helps to neutralize and counteract the spiciness as it starts to kick in,” explains Delroy Haye, the executive chef at Sandals Negril.

Festival rose in popularity in the 1970s, though no one is quite sure where it originated or where its name comes from. B.W. Highman, in his book Jamaican Food, writes that it “was named for the Jamaica Festival of Arts and Culture that marked annual Independence celebrations.” Haye adds that the dumplings “got their name because eating them was fun — like a festival, but in your mouth.”

“You can never buy just one festival,” Haye says. “It’s so simple but so addictive and cheap.” He recalls a childhood visit to Hellshire, a fishing town where local legend says the bread originated from, where he and his parents regularly indulged in festival as a side dish for larger meals. “My dad sent me to one of the stalls to buy some festival that we could eat with some other food we brought,” he says. “I brought my own money and got 10 festivals for myself because I love it that much.”

How to eat jerk meat and festival bread 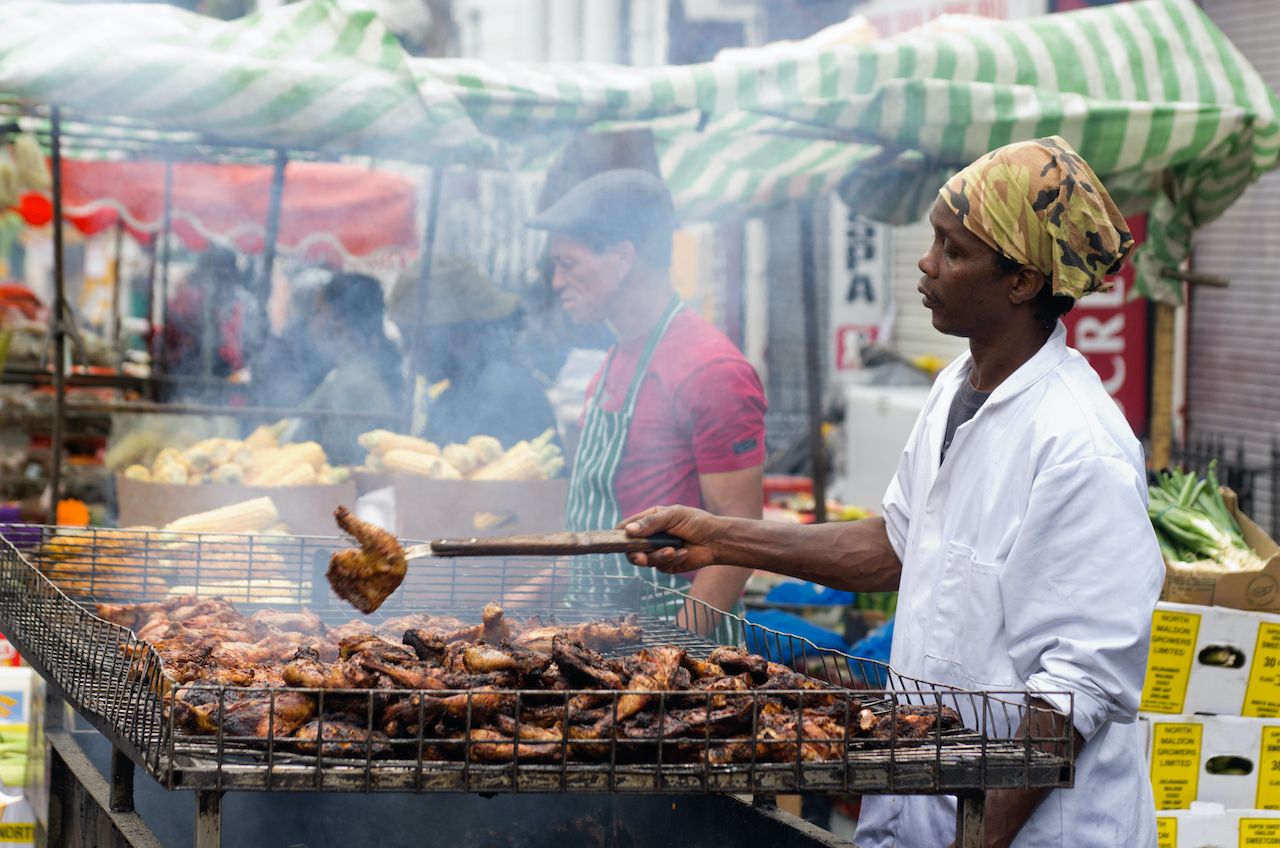 Festival bread, like jerk meat, can be eaten at festivals in Jamaica and at roadside shacks throughout the country. The best jerks are marinated overnight and then slow-cooked over pimento wood. Large sheets of zinc are put over the slowly cooking meat to trap the fragrant smoke.

The best festival to go with the meat, according to Haye, “is always freshly fried. It’s hot with just a little bit of oil on the outside, with a perfect golden brown color and a slightly sweet aroma and taste. It will have a nice crunch with each bite, but it’s still soft and doughy on the inside.”

To find the best food on your trip to Jamaica, Haye says to look for a line at the jerk shack. The best jerk shacks should have extra sauce on the counter for adding more kick. While there’s nearly always a spicy heat, the best jerk, he says, is balanced.

“Jerk is flavorful, smokey, and moist — not dry or too spicy where it takes away from the flavors,” he explains.

To counteract the spiciness of jerk, Chef Haye advises sipping Ting, Jamaican grapefruit soda, in between bites. He adds “don’t forget to eat a piece of festival after each bite of jerk chicken or pork “to keep the fire at bay.”

Spirits + CocktailsHow To Eat and Drink Your Way Through Grenada, the Caribbean’s Most Flavorful Island
Tagged
Food + Drink Jamaica
What did you think of this story?
Meh
Good
Awesome

12 Compelling Reasons To Have Your Wedding in Jamaica

14 Ways To Spend the Perfect Honeymoon in Jamaica

12 Photos That Prove Kingston Is an Arts and Cultural Hotspot

9 Incredible Summer Adventures You NEED To Have in Jamaica

11 Travel Experiences That Can Strengthen Your Relationship