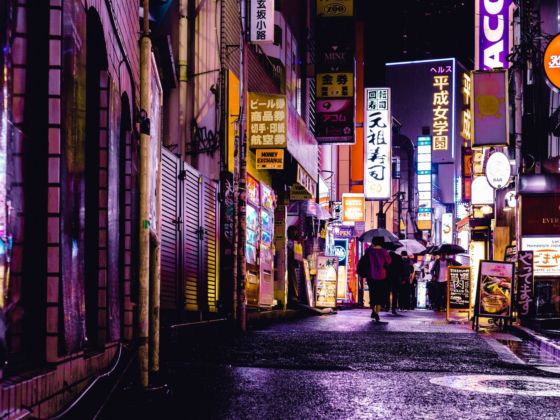 A 10-city tour for experiencing the best of the country

Enter All Nippon Airways. When you fly ANA, you’ll enjoy authentic Japanese dishes crafted by master chefs. You’ll be met with the Spirit of Omotenashi — a mix of traditional Japanese hospitality, comfort, luxury, and adventure — and the #1 staff in all of Asia (as rated by Skytrax). And you’ll have access to the largest domestic flight network in Japan, serving 45 destinations around the country.

With All Nippon Airways, your trip to Japan begins the moment you board the plane. So consider ANA — named 2018 airline of the year by ATW — your ultimate host. And consider this page your ultimate guide to the many wonderful worlds of Japan. Ready to explore?

This guide is proudly produced in partnership with the All Nippon Airways.

The claim-to-fame: Tokyo is so vast, it’s hard to wrap your head around its size. Take the measure of the sprawling metropolis from great heights such as Mori Tower in Roppongi, the classic Tokyo Tower, or the top of the Tokyo Metropolitan Government Building.

The elevated experience: Score tickets to the teamLab Borderless digital art museum, where you’ll be fully immersed in shifting, shimmering projections. The future is now.

The elevated taste: Edomae-sushi is the original Tokyo-born sushi, historically made from fish caught in Tokyo Bay. Now, it stands for the hand-formed vinegared rice topped with a morsel of fresh raw fish, to be eaten in one or two bites.

Getting there: Dozens of ANA flights daily to Tokyo from locations all over Japan and the world. This is your gateway…where will you go next?

The claim-to-fame: Osaka is known as Japan’s kitchen, and Osakans love to eat! Sample the local wares on a foodie walking tour, or have a self-guided wander around the Dotonbori neighborhood with an adventurous heart and an empty stomach.

The elevated experience: Osaka’s handsome castle sits right in the center of the city. Explore the history of samurai battles, picnic under the cherry blossoms (spring is a great time to visit), and stroll past the moats, gates, and turrets.

The elevated taste: Tako-yaki is probably Osaka’s favorite street food. The balls of batter are filled with chunks of octopus and green onion, then grilled to a golden brown and topped with mayonnaise and special sauce.

Getting there: Dozens of ANA domestic flights daily to Osaka’s two regional airports, as well as flights to and from several cities in China.

Hiroshima Castle Genbaku Dome Okonomiyaki Miyajima
You’ve heard of it — now it’s time to know it. Though the city has been almost entirely rebuilt in the post-war era, and today bustles away like any other million-citizen hub, its story still echoes Japan’s great history.

The elevated experience: Hiroshima will forever be known as the first city to be targeted by an atomic bomb. The Atomic Bomb Dome, or Genbaku Dome, remains as a symbol of the war and a monument to peace. It’s a sobering but necessary excursion.

The elevated taste: Hiroshima has its own style of okonomiyaki, the savory pancake cooked on a hot griddle and filled with vegetables, seafood, and meat. The Hiroshima version also includes a helping of noodles and a fried egg, all doused in sauce and other toppings of your choice.

Getting there: Hiroshima is a 1.5-hour flight from Tokyo.

Myth Bridge Takachiho Gorge Chicken Nanban Torii gate near Devil’s Washboard
There’s a magic to where the mountains meet the sea, and you’ll meet it in Miyazaki. It’s the kind of magic reflected in Japan’s moniker, the “Land of the Rising Sun.”

The claim-to-fame: Miyazaki Shrine in the city center is surrounded by a forested area, enshrining Japan’s mythical Emperor Jimmu. A horseback archery festival is held here on April 3, and the Grand Festival with its elaborate costume parade is takes place in October.

The elevated experience: Rent a bicycle and cruise around Aoshima, a tiny jewel of an island just off the coast, with a pretty shrine, a subtropical forest, and a strange natural rockbed beach phenomenon called Devil’s Washboard.

The elevated taste: Chicken nanban is Miyazaki’s signature dish, a sweet-and-sour fried chicken topped with tartar sauce. Wash it down with some sweet potato shochu made in the prefecture.

Getting there: A directly flight from Tokyo to Miyazaki takes under two hours.

Torii gate on lake Ashi Owakudani hot springs Black eggs Mount Fuji from Lake Ashi
Hot springs resorts, or onsen, are where you’ll spend most of your days in Hakone. Mt. Fuji, looming high on the horizon, has nearly elevated this volcanic landscape to ritual status.

The claim-to-fame: Hakone is Tokyo’s favorite weekend hot springs getaway, with both locals and visitors making the trip to soak in the piping hot mineral waters. Make sure to choose a resort that has an open-air bath with a view.

The elevated experience: Sail across Lake Ashi on a ferry (including one that’s designed to look like a pirate ship) and see Mt. Fuji crowning over the lake.

The elevated taste: It’s said that eating one of Hakone’s black eggs at Owakudani, or Hell Valley, boiled in the sulfurous hot springs, will add seven years to your life.

Getting there: Hakone is 90 minutes from Tokyo’s Shinjuku Station on the Odakyu Romance Car, an express train, making this an easy day trip from the capital.

Ishigaki coast Ishigaki lighthouse Yushi Tofu Fusaki Beach
You might tend to restrict your thinking to the tropics when it comes to an island getaway, but Ishigaki is a perfect exception. With a culture distinct from that of mainland Japan, the streets contain as many adventures as its shores, forests, and reefs.

The claim-to-fame: Ishigaki is a diving destination with brilliant blue-green water. It’s best known for its manta ray congregation, and lucky divers will have the chance to swim with the rays.

The elevated experience: Sunbathe on Ishigaki’s sandy and rocky beaches, swim in the clear water, and snorkel along the coral reefs. Just be careful to avoid habu jellyfish, which pack a powerful sting.

The elevated taste: Yushi-tofu is an island favorite. This soft, fluffy tofu is served with rice or noodles, and sometimes topped with seaweed and pollock roe. Try making your own yushi-tofu at Tofu Higa.

Getting there: A three-hour flight from Tokyo, or one hour from Naha.

Rishiri Coast Top of Mount Rishiri Uni-don bowl Rishiri Island from the ocean
An extinct volcano rising up out of the Sea of Japan, Rishiri Island claims the kind of adventures born from a land of lava.

The claim-to-fame: Along with neighboring Rebun Island and a piece of the adjacent Hokkaido mainland coast, Rishiri is part of Rishiri-Rebun-Sarobetsu National Park, Japan’s northernmost natural park. It’s known for its spectacular natural scenery, alpine plants, glittering lakes, and the majestic Mt. Rishiri.

The elevated taste: Uni-don is a bowl of rice topped with velvety raw sea urchin, only available in summer. You should also try kombu (kelp), which is harvested here and used in everything from soup to tea.

Getting there: ANA offers one-hour flights between Sapporo and Rishiri from June to September, or take a ferry from Wakkanai.

The claim-to-fame: Nagasaki is known as an important trading port, and distinct foreign influences are scattered throughout the city. Check out monuments like St. Mary’s Cathedral, Spectacles Bridge, and Glover Garden to get a sense of the city’s international vibe.

The elevated experience: Nagasaki has the somber distinction of being the second and most recent city to be devastated by an atomic bomb. The Nagasaki Atomic Bomb Museum traces the history of the bombing and the local aftermath.

The elevated taste: International flavors characterize Nagasaki’s cuisine. Try the champon noodles, a Japanese rendition of Fujian cuisine, made from pork, chicken, seafood, and vegetables. Polish it off with a slice of castella, a rich pound cake brought to the city by the Portuguese.

Getting there: A two-hour flight from Tokyo, then 40 minutes by bus.

Fall colors Odori Park Butter corn ramen Sapporo during winter
You likely know Japan’s fifth-largest city for its eponymous beer, but this skiing capital on the northern island of Hokkaido has a few more adventures in mind. Come in the snowy season, and you’ll see Sapporo come alive.

The claim-to-fame: Sapporo’s long winter is put to use at the annual Snow Festival, when the city gathers to produce enormous snow and ice sculptures. Thousands flock here in February to tromp through the snow and marvel at the fleeting works of art.

The elevated experience: Learn about the region’s famous alcoholic drinks by visiting the Sapporo Beer Museum in Sapporo, the Nikka Whisky Yoichi Distillery in Yoichi, or the Sapporo Brewery in Eniwa.

The elevated taste: Hokkaido is famous for both its dairy and vegetables. These come together in one glorious bowl with corn butter ramen, a creamy, slightly sweet, miso-based soup that’s warming and comforting.

Getting there: Dozens of 90-minute flights per day from Tokyo via ANA.

Historic Kanazawa Kanazawa Castle Kanazawa sushi rice bowl Kenrokuen garden
A hub of Edo-era architecture, handicrafts, and art, Kanazawa is a creator’s hotspot bathed in history and color — namely, gold. And the seafood? That might as well be gold, too.

The claim-to-fame: Strolling in Kenrokuen, one of Japan’s “three beautiful landscape gardens,” is a sublime way to pass an afternoon.

The elevated experience: Kanazawa produces more than 90% of the country’s gold leaf, and visitors can try their hand at goldcraft at one of the city’s gold leaf studios, such as Sakuda.

The elevated taste: Kanazawa is known for its excellent seafood, plucked from the Sea of Japan. Try some as sushi or sashimi — the nodoguro, or rosy seabass, caught in autumn, is a sumptuous bite.

Getting there: One-hour flight from Tokyo plus a 40-minute bus ride, or 2.5 hours on the Shinkansen bullet train.

This guide is proudly produced in partnership with the All Nippon Airways.
✖
travelstoke
Download the mobile app
stoked by