Skiers think of the deep powder of Hokkaido. Foodies focus on the izakayas and noodle bars of Tokyo or Kyoto. Of course, there are also the onsens, ryokans, and many spiritual and cultural sites throughout the country. When one dreams of Japan, one thing that usually doesn’t immediately come to mind is calisthenics. But if you’re looking for a quick and easy exercise routine to add to your 2021 resolutions, look no further. While you can’t visit Japan right now, you can workout alongside millions of Japanese people every day with the country’s most popular exercise program, radio taisō. Here’s the lowdown on this quirky but effective calisthenics routine.

What is radio calisthenics?

Radio calisthenics, or rajio taisō, which translates directly as “radio exercise,” is a daily morning exercise show broadcast throughout Japan. It’s also available, though much less popular, in parts of Taiwan and China. Radio calisthenics has taken place nearly every morning at 6:30 AM for several decades. Each day, millions of listeners tune in to stretch and run in place with a simple repetitive routine alongside family, friends, coworkers, or even by themselves. Thanks to the advent of handheld video cameras, and eventually smartphones and YouTube, viewers around the world can now follow along and try to keep up.

The idea behind the broadcasts is to provide an easy morning wake-up exercise that nearly anyone can do. Radio taisō first broadcast in November of 1928 under the name National Health Exercise Program, inspired by similar broadcasts happening overseas. Allied powers banned radio calisthenics following the end of World War II on account of the communal exercises representing militarism (which is ironic as the original idea stemmed from the US), but radio taisō was revived in 1951 and, with few exceptions, has been broadcast daily ever since.

Workouts are narrated by a calm but firm male voice. For those watching with video, sessions are often accompanied by a group of fit hosts perfectly synchronized in both movement and dress. Characters like Pikachu or a large bunny occasionally stand-in for their human counterparts. Sometimes they’re in a park, other times the workout takes place in a studio. But the general format is the same: Each is three minutes long, punctuated by strict counts of “1-2-3-4-5-6-7-8” and accented by piano music. They’re easy to do anywhere and do not require exercise equipment or special training. If you have enough room to lift your arms above your head and do a few twirls, you have enough room for rajio taisō. 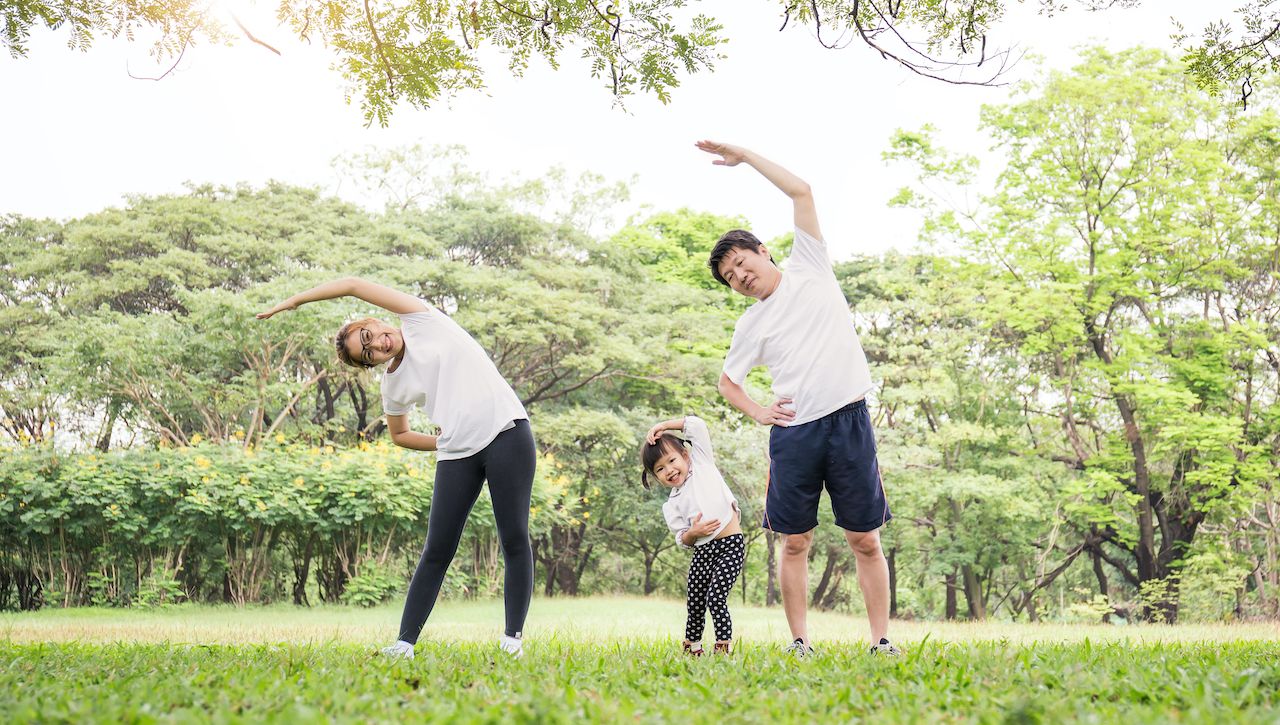 You’re totally justified if you add this quick daily exercise to your morning routine. Rajio taisō is often credited (at least partially) for the healthy and long lives enjoyed by many Japanese people. Charts in a Nature article on the country’s long life expectancy showed the average Japanese person can expect to live over 84 years, compared with 78 years in the United States and 82 years in Canada.

However, listening live is tough in the Western Hemisphere. The routine broadcasts on the national broadcaster NHK in Japan, which you can stream, but the programming doesn’t always match with what airs at home in Japan. But adding these few minutes of morning exercise to your routine is as easy as a YouTube search, your best option to try a variety of routines led by an equally entertaining variety of characters. The website Japan Kuru offers a breakdown of three different types of rajio taisō exercises, complete with videos, which you can then repeat daily. Here’s to a healthy — if regimented — 2021.

WellnessHow To Stay in Shape at Home When the Gym Is Closed
Tagged
Wellness Japan
What did you think of this story?
Meh
Good
Awesome