Concealed amid towering cedar trees on top of Mount Koya stands the Okunoin cemetery. A maze of ancient, mossy tombstones, its pathways lead to the mausoleum of one of Japanese Buddhism’s most important figures, Kobo Daishi. Also known as Kukai, Kobo Daishi is said to rest in Okunoin in eternal meditation, making the cemetery one the most sacred locations in Japan. The ethereal atmosphere of this final resting place draws pilgrims, as well as tourists who wants to find some spiritual peace. 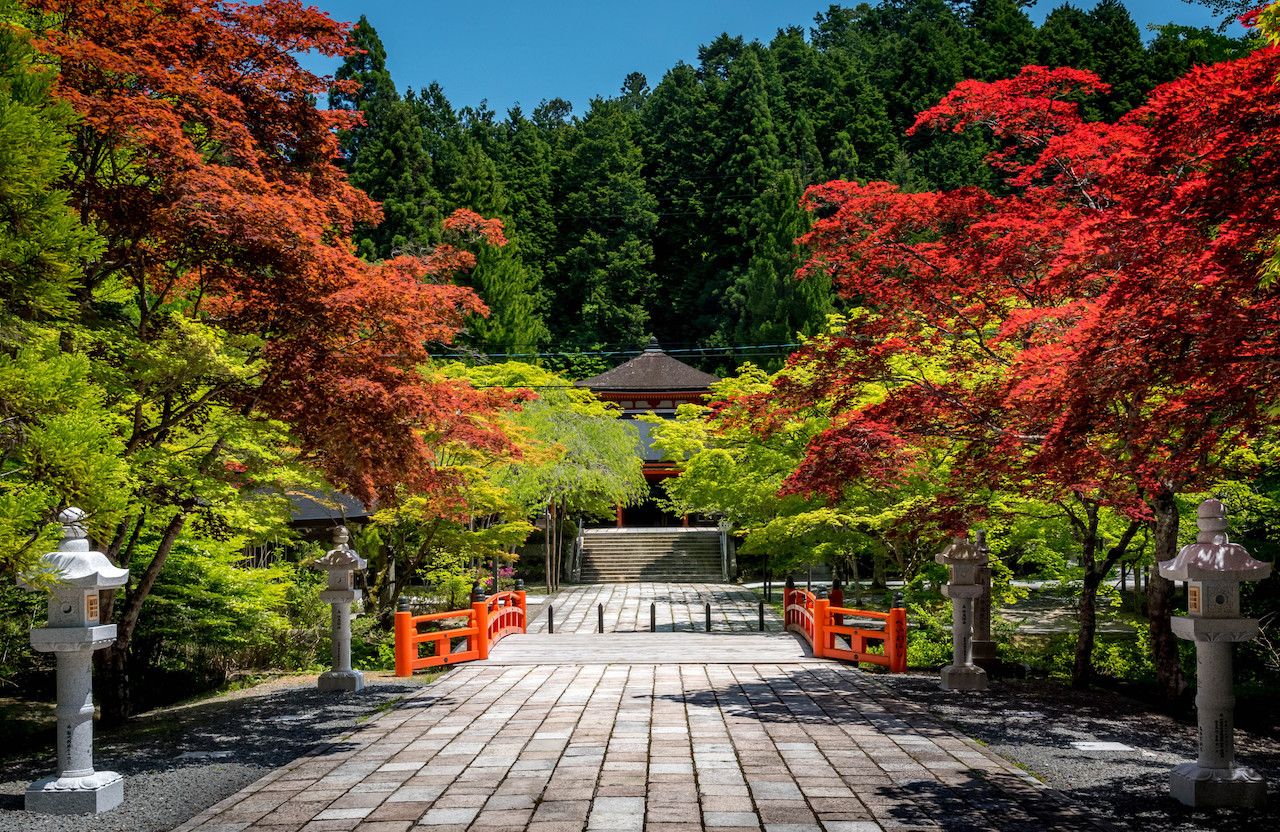 Mount Koya — known as Koyasan in Japanese — is a tiny temple town located deep in the rugged Kii mountain range of Wakayama prefecture. Geographically and spiritually raised above everyday society, it was set up by Kobo Daishi — a monk, poet, and scholar who founded the influential Shingon sect of Buddhism in Japan — in the ninth century as a retreat from the concerns of worldly affairs. Shrouded in incense smoke, the narrow streets of Koyasan echo with the sound of gongs and prayers, transporting you to a place of solemn tranquility as soon as you arrive. 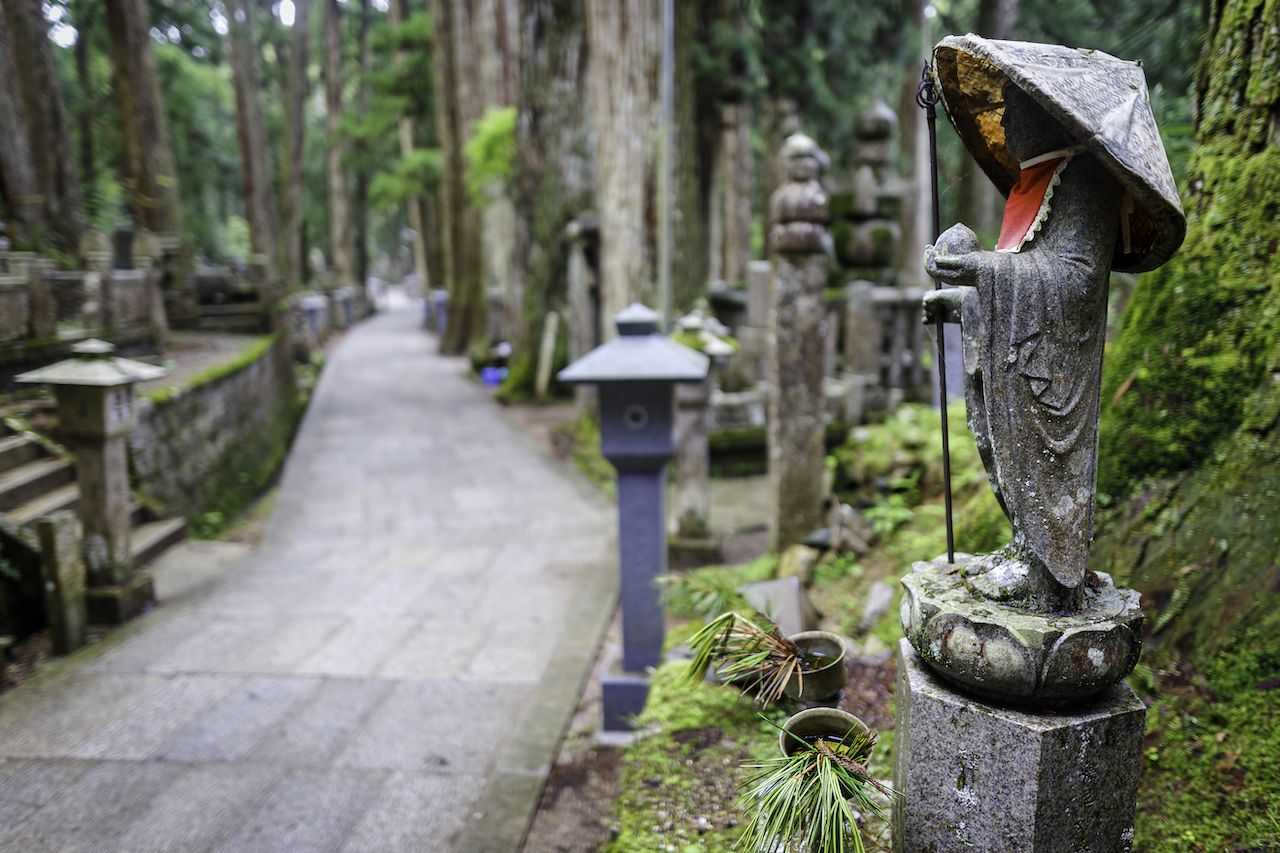 Okunoin is in the eastern part of Koya, surrounded by forest. Around one-and-a-half miles long and the site of over 200,000 graves, it’s the largest cemetery in Japan. Beginning at the Ichi-no-hashi bridge, stone pathways lined with trees and lanterns lead through the tombstones, bringing you towards Kobo Daishi’s mausoleum.

The cemetery is home to a mix of graves, including those of ancient feudal lords, prominent monks, and military commanders such as Date Masamune, who founded the city of Sendai in northern Japan. These are juxtaposed with contemporary graves, such as symbolic monuments from companies like Panasonic to honor employees who have passed away, as well as more unusual monuments — including a memorial from a pest control company to all the creatures their products have exterminated. The more modern graves tend to be located in the newer section of the cemetery, which has a shorter path to the mausoleum beginning at the Okunoin-mae bus stop. 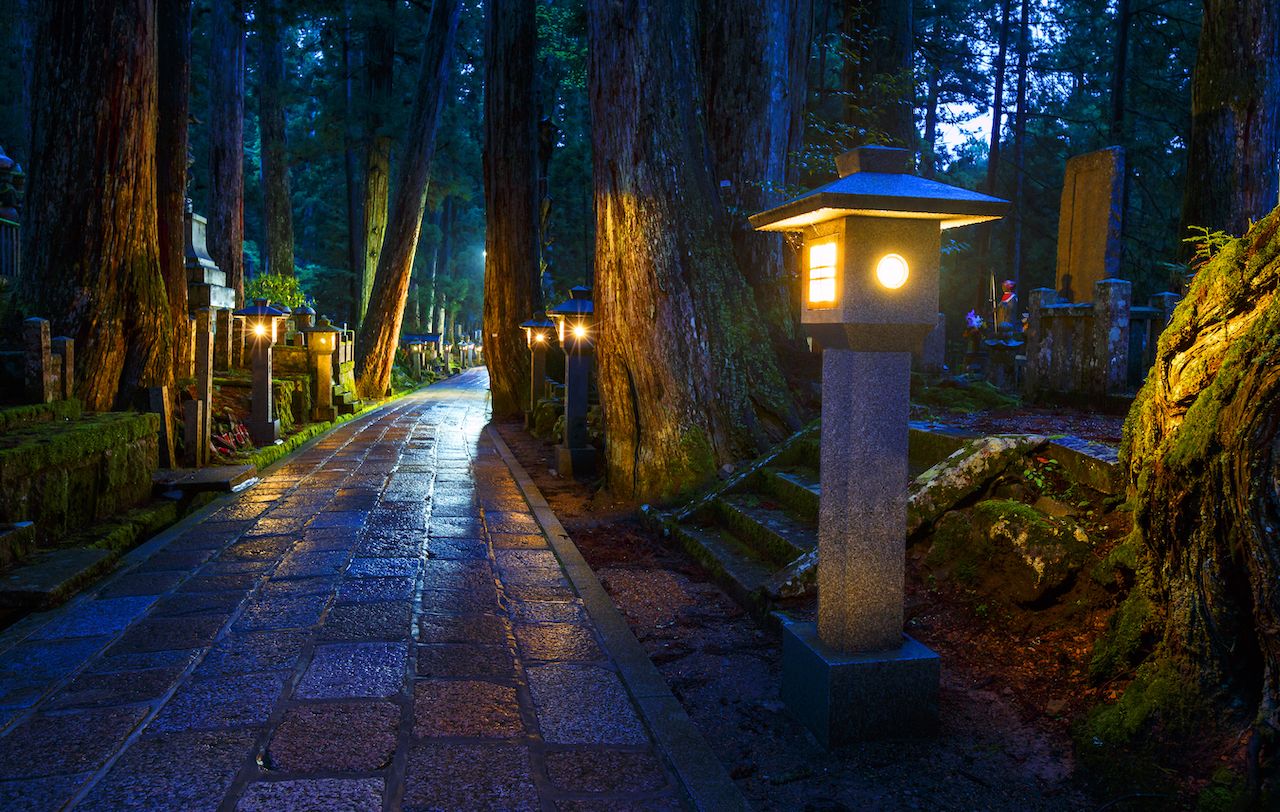 While most people visit Okunoin during the day, it’s also possible to wander the cemetery at night. The quiet, haunting atmosphere at this time is especially memorable. Early mornings are another good time to visit, when mist lingers in the cool air, and the cemetery takes on a particularly mystical vibe. 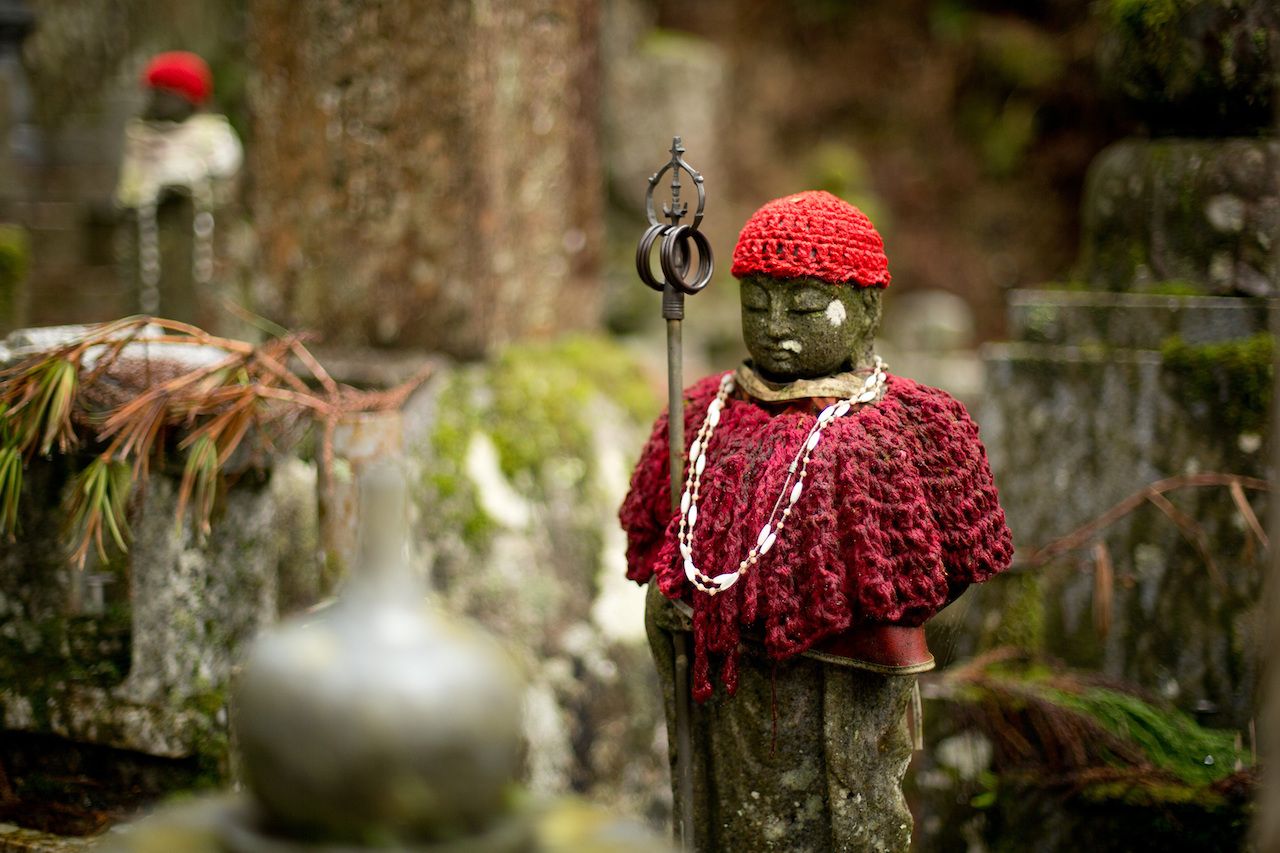 In addition to the tombstones themselves, there are a number of other interesting features to be found on the route to the mausoleum. The most unsettling of these is the Sugatami-no-Ido, or Well of Reflections, found just after the Naka-no-hashi bridge in the middle of the cemetery. Legend has it that if you look into this tiny well but don’t see your reflection, you are fated to die within the next three years.

Closer to the mausoleum you’ll see the Miroku stone, which is kept in a small wooden cage with an opening just big enough to reach inside. It is claimed that the stone is able to judge the worth of those who attempt to lift it, feeling light to the virtuous and heavy to the sinful.

You’ll also come across numerous jizo statues scattered throughout the cemetery grounds. Jizo is a Buddhist deity who protects travelers, children, and the souls of the deceased. His statues are often found in places that are thought to be a boundary between the physical and spiritual realms — like Okunoin. The moss-covered stone monuments are often dressed in red bibs or caps and sometimes even adorned with red paint, which is thought to be a way of protecting the souls of departed children. 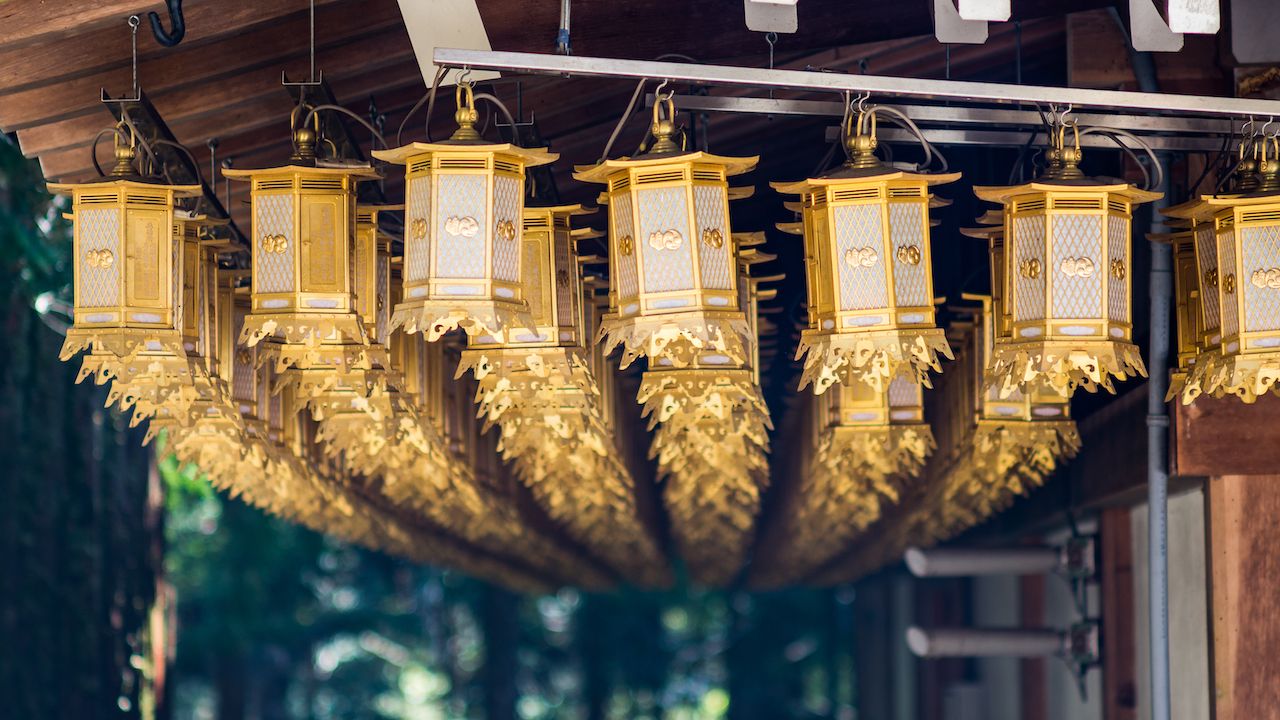 The path eventually reaches the Gobyo-no-hashi bridge, which marks the entrance to the most sacred inner part of Okunoin. This is where the mausoleum of Kobo Daishi is located. Once you cross this bridge, visitors are not permitted to eat, drink, or take photographs.

While entry to the mausoleum itself is not possible, you can visit Torodo Hall, the Hall of Lanterns. This is the cemetery’s main place of worship, where pilgrims come to pray to Kobo Daishi. Inside are over 10,000 lanterns, which are kept permanently lit — according to legend, some have been burning for over 1,000 years. Beneath the hall lies a labyrinthine room whose walls are lined floor to ceiling with tens of thousands of tiny Buddha statues that have been donated to Okunoin. 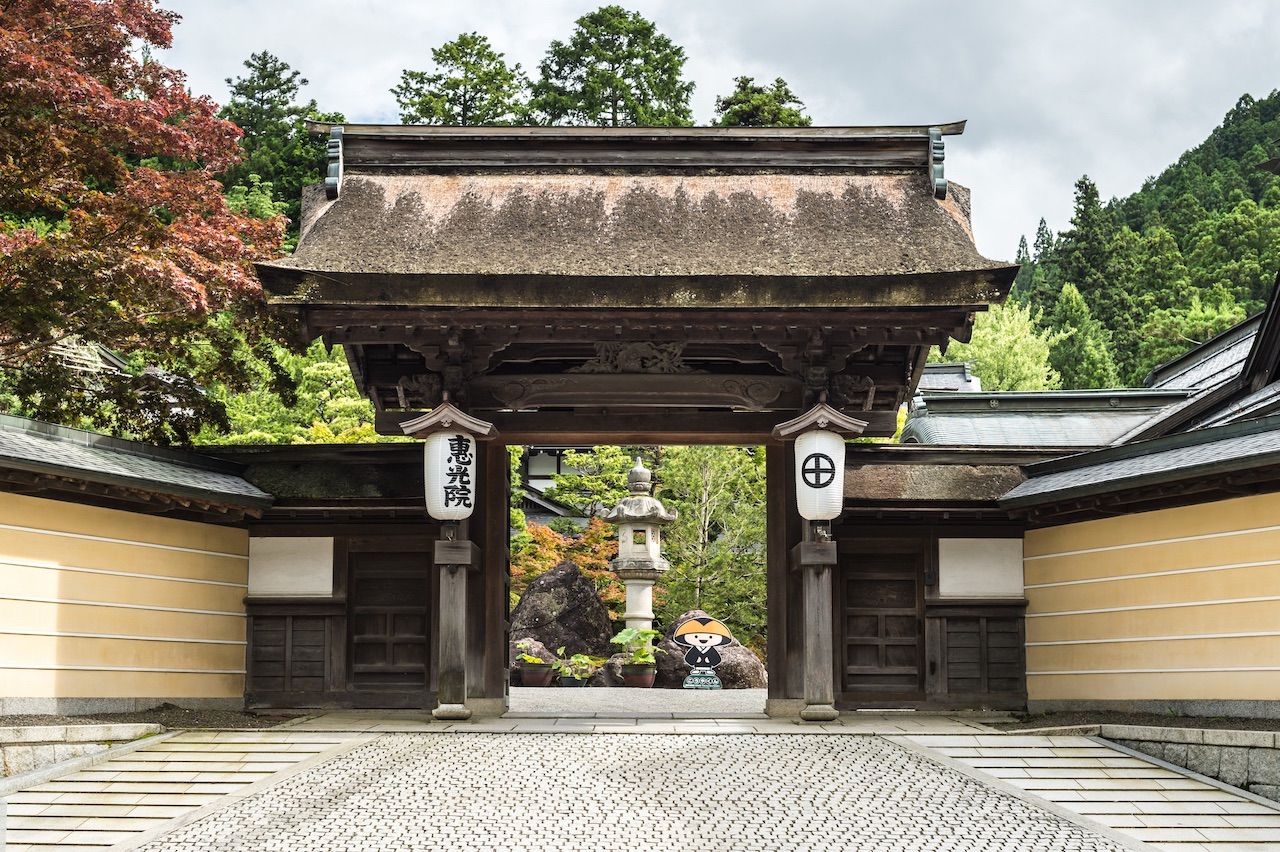 Many of the temples on Mount Koya — including Joki-in, Eko-in, and Saizen-in — open their doors to overnight guests. The accommodation provided is similar to a traditional Japanese ryokan (inn) rather than the austere conditions you might expect. You’ll usually get a private room with a comfy futon bed and tatami mat flooring, and there might even be a shared onsen (hot spring bath) on site. Breakfast and dinner are usually included with the price of the room, and it’s a great chance to try shojin ryori. This traditional vegetarian Buddhist cuisine is exquisitely presented and features local, seasonal ingredients, such as Koya’s famous freeze-dried tofu.

As part of your temple stay, or shukubo, you’ll also have the opportunity to take part in meditation classes and early morning prayer ceremonies. The latter are usually only open to people staying overnight at that particular temple and are definitely worth the 5:00 AM start. Each temple will have its own unique ceremony, but you can expect a mixture of chanting, meditation, and the offering of incense. 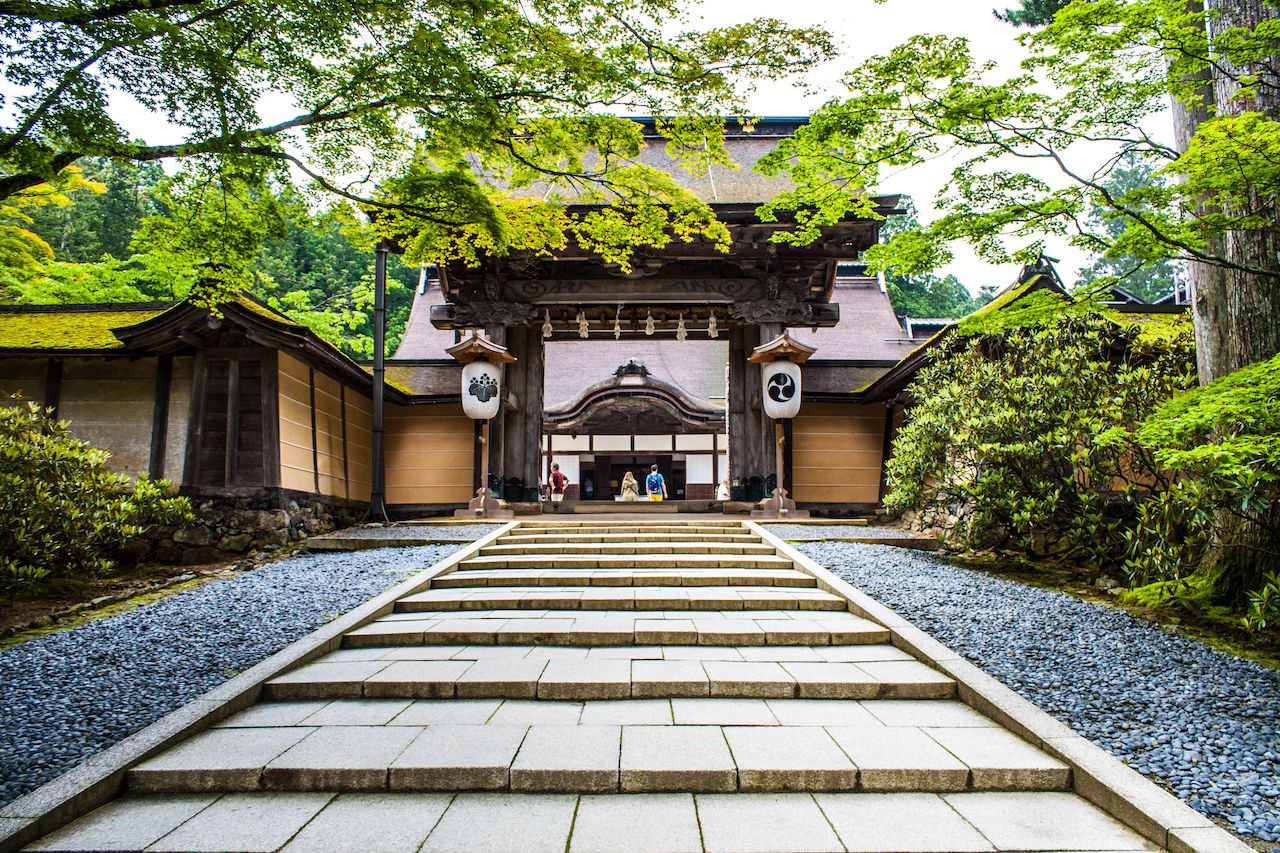 If you’re making the effort to travel all the way to Mount Koya, it would be a shame to only visit Okunoin. Make time for Kongobu-ji temple, the head temple of Shingon Buddhism in Japan and the most important temple in the town. You can take a self-guided tour around its main buildings for a small fee, during which you can admire the ceremony halls and elegant artwork depicting flowers, wildlife, and Koya in different seasons. 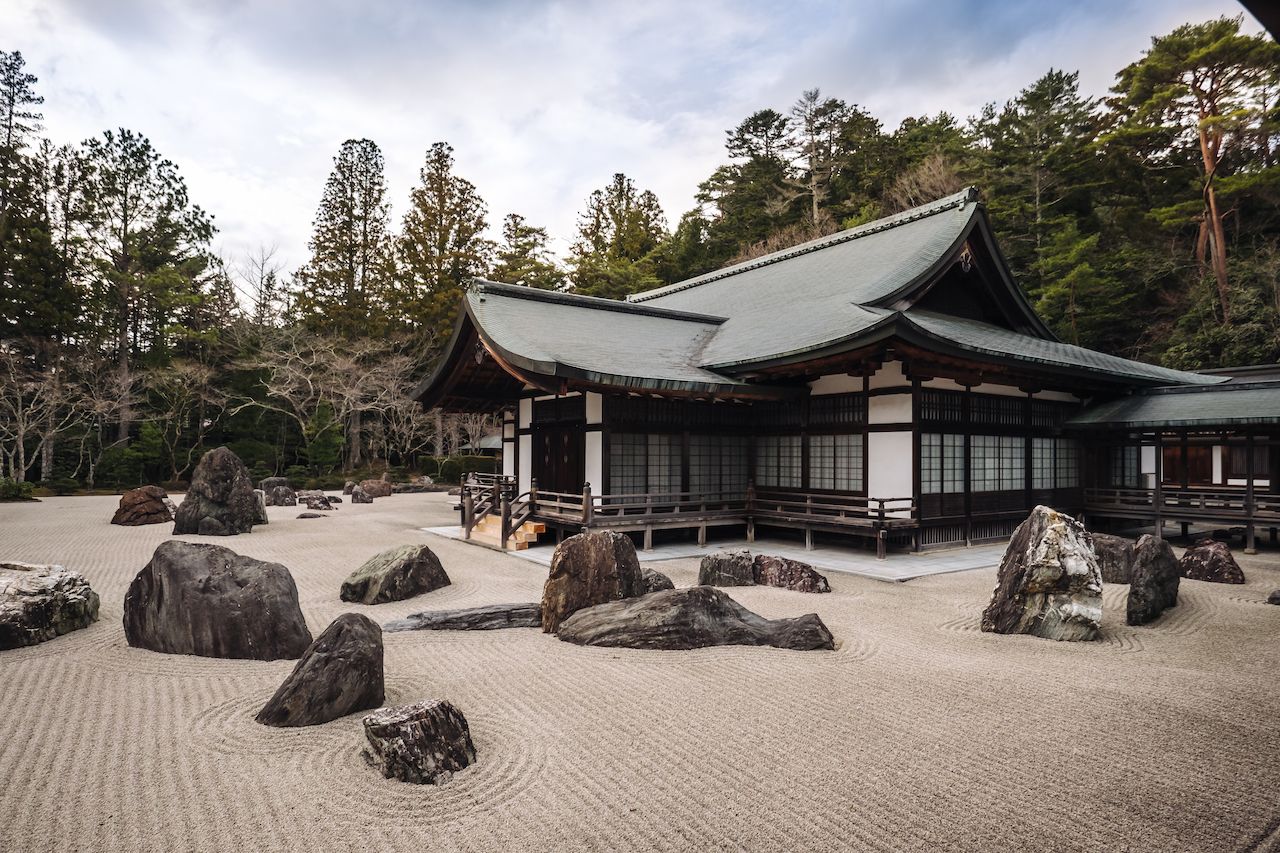 The temple is also home to the largest Zen garden in Japan at nearly 25,295 square feet. The Banryutei Rock Garden’s abstract design is intended to depict a pair of mighty dragons materializing from a sea of clouds to protect Kongobu-ji and is an ideal place for contemplation.

Osaka is the nearest major city to Mount Koya. From Namba station, take the Nankai Limited Express or Nankai Koya local line to Gokurakubashi (the latter is the cheaper option, with a longer journey time). From here you take the cable car up to Koyasan station. You will then need to take a short bus ride to reach the town center as pedestrians are not allowed on the narrow road.

There are two or three buses an hour that run directly to Okunoin. One option is to get off at the Ichinohashi-guchi bus stop and walk the traditional one-and-a-half-mile route through the cemetery to the mausoleum. Alternatively, stay on the bus until Okunoin-mae and take a shorter path through a newer section.

If you’re not going directly from the cable car to the cemetery, you also have the option to walk from the town center. It’s an easy 10-15 minute walk from the main Senjuinbashi intersection, and you’ll pass plenty of interesting sights along the way, including tea houses, souvenir shops, and temples.