Taking the bullet train from Tokyo to Kyoto, you’re probably ready to ditch the bustle of the Japanese capital and experience some Zen serenity in this ancient city. Yet, arriving at Kyoto’s main train station — a busy, modern terminus more like a major airport — you realize you’re still in an urban center. Kyoto, after all, has nearly a million and a half residents, and plenty of high-rise apartment blocks.

However, rent a bike and you’ll quickly be transported to the Kyoto you’ve imagined — the Kyoto of rivers and canals, wooded hills, serene temples, sand gardens, bamboo forests, and cherry trees. Kyoto is without a doubt best explored by bike with accessible routes that aren’t limited to seasoned cyclists. So if you want to see the serene side of Japan without having to shove your way onto public transportation, rent a bike and start exploring.

You can rent bicycles everywhere. 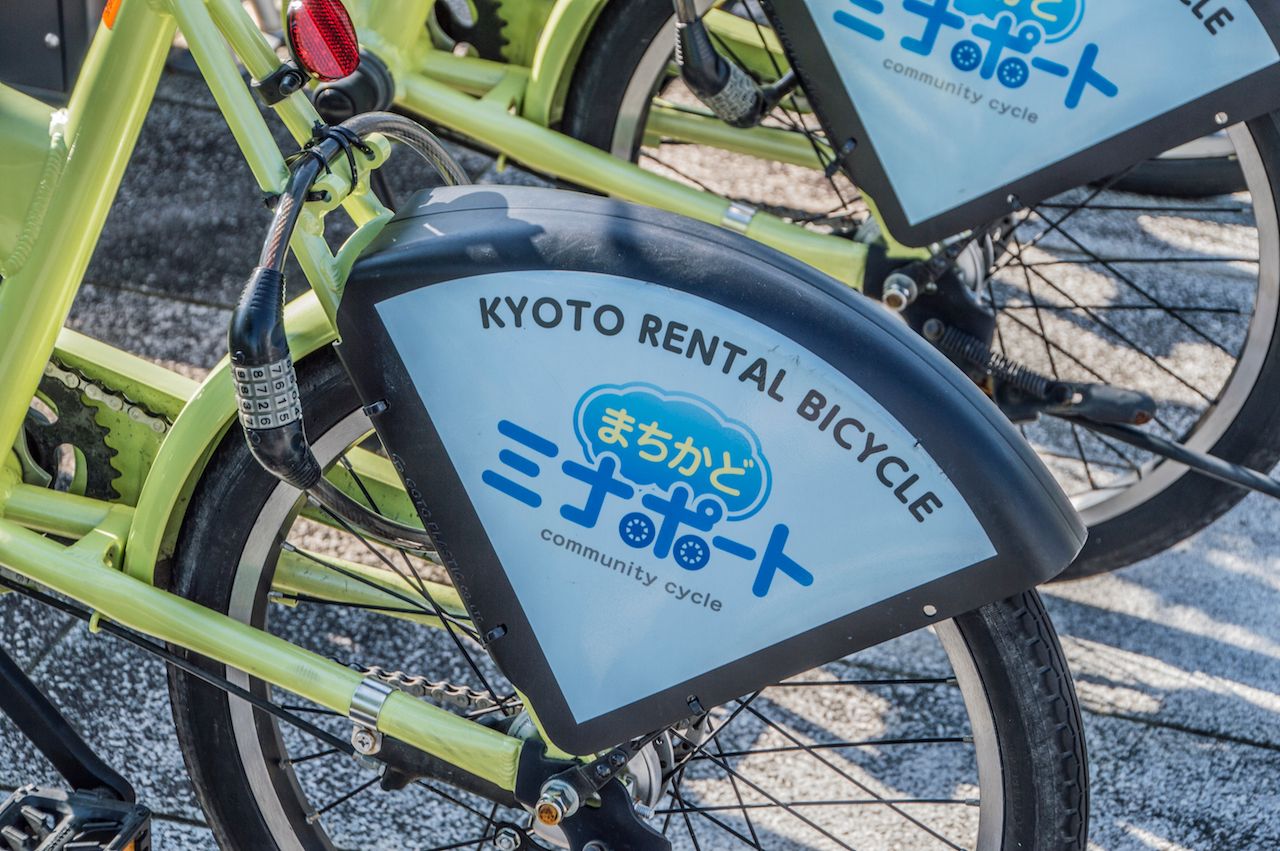 Assuming you don’t have luggage to drop off at your hotel or ryokan — a Japanese inn — you can rent bicycles right at the train station. We recommend doing so at the Kyoto Cycling Project as it will also supply you with maps and can suggest tour routes. If you didn’t get them at the train station, there are plenty of other places you can rent them, whether from Kyoto Cycling or other companies.

Cycling is how the locals get around. 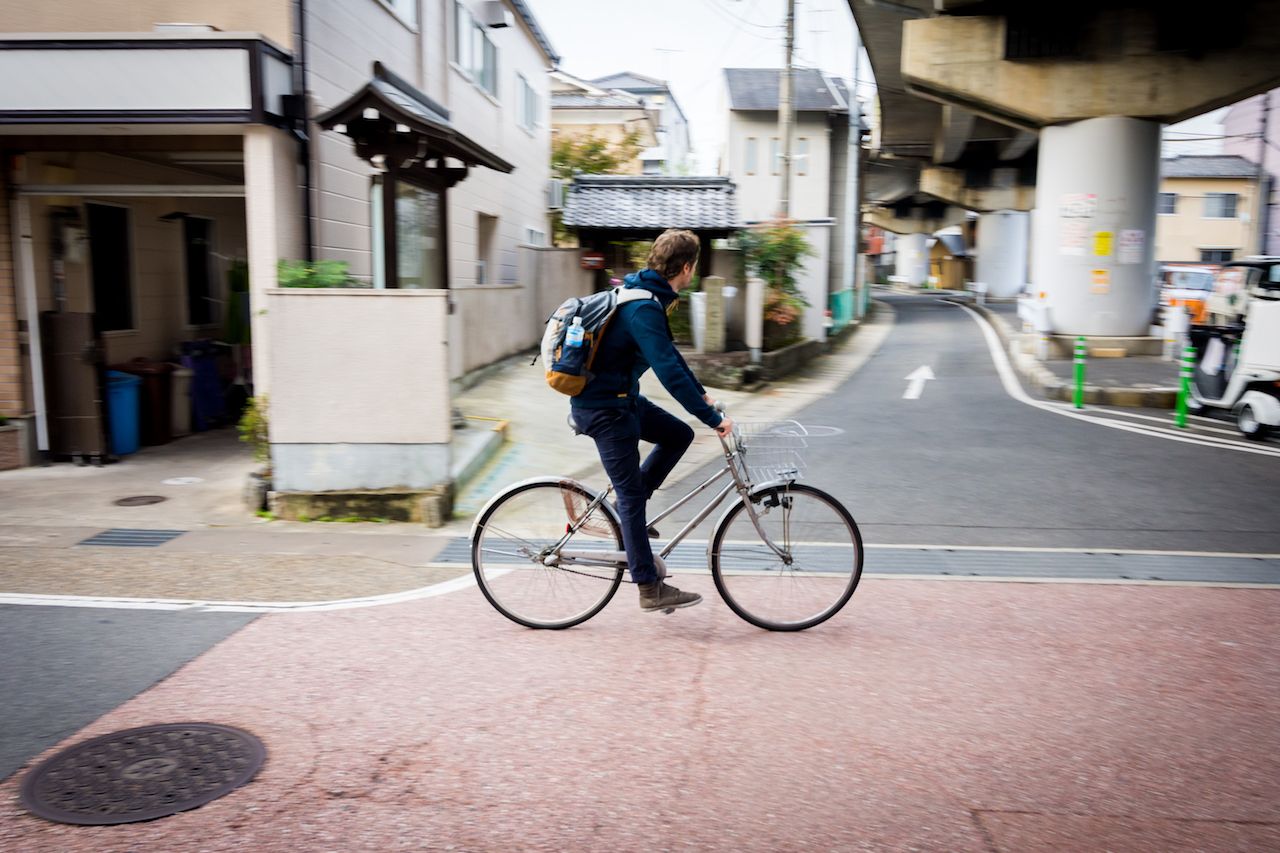 When you ride a bike, you’ll just be doing what the locals do to get around. Since locals rely on cycling as a major means of transportation, the city is incredibly bike friendly. Just don’t forget that in Japan, traffic travels on the left side of the road. Bikes should too.

You can even ride your bike on some sidewalks — but you need to be sure you see a sign permitting it. Even so, you should yield to pedestrians and ride on the part of the sidewalk closest to the street. Also, note that at certain times of day, riding on those same sidewalks will be prohibited. You’ll have to get off your bike and walk it.

In fact, Kyoto has so many bikes that city sidewalks have become overrun with them. The solution has been to create indoor bike parking lots all over the city. You can park your bikes at these lots for up to three hours for free. A couple of spots in the city even allow you to roll your bike onto a portal, which will then whisk it down for underground parking.

If you do park your bike somewhere that blocks pedestrian traffic, you may find it missing on your return. It will have been tossed onto a truck and impounded. In its place, a note will tell you where you can pick it up.

Kyoto is full of bike-friendly waterways. 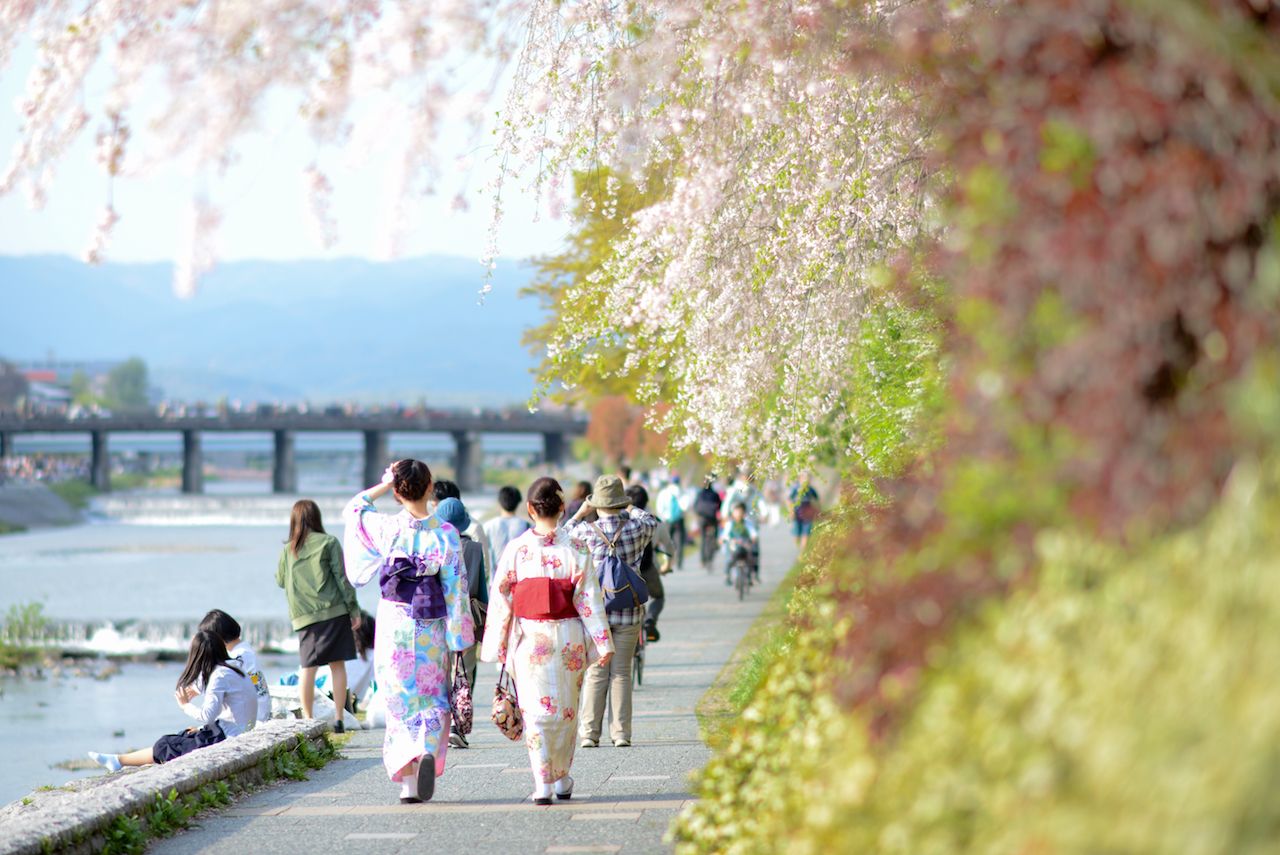 Kyoto’s Kamo River runs from the mountains due north of Kyoto directly south, bisecting the city. The river, and the paved paths that run along either side of it, are sunken below street level and strewn with trees and greenery. Just getting down along the river is an immediate escape from the urban feel, making it popular with walkers, joggers, and cyclists.

For cyclists, though, the Kamo River path is not just pretty and fun. It’s also one of the most efficient ways to traverse the city as you avoid traffic and stoplights, rolling unimpeded past the cross streets that run along the bridges overhead.

In addition, the city has several canals. Not all the canals have bike paths alongside them. The Shirakawa Canal in Gion is too narrow for that, but it does have lovely bridges crossing over it that are only wide enough for pedestrians and bikes. The Okazaki Canal, however, is one of the most beautiful spots to take in the cherry blossoms in spring. You can ride your bike alongside the water, under the white and pink trees bursting with flowers.

Biking is the easiest way to get to Kyoto Imperial Park. 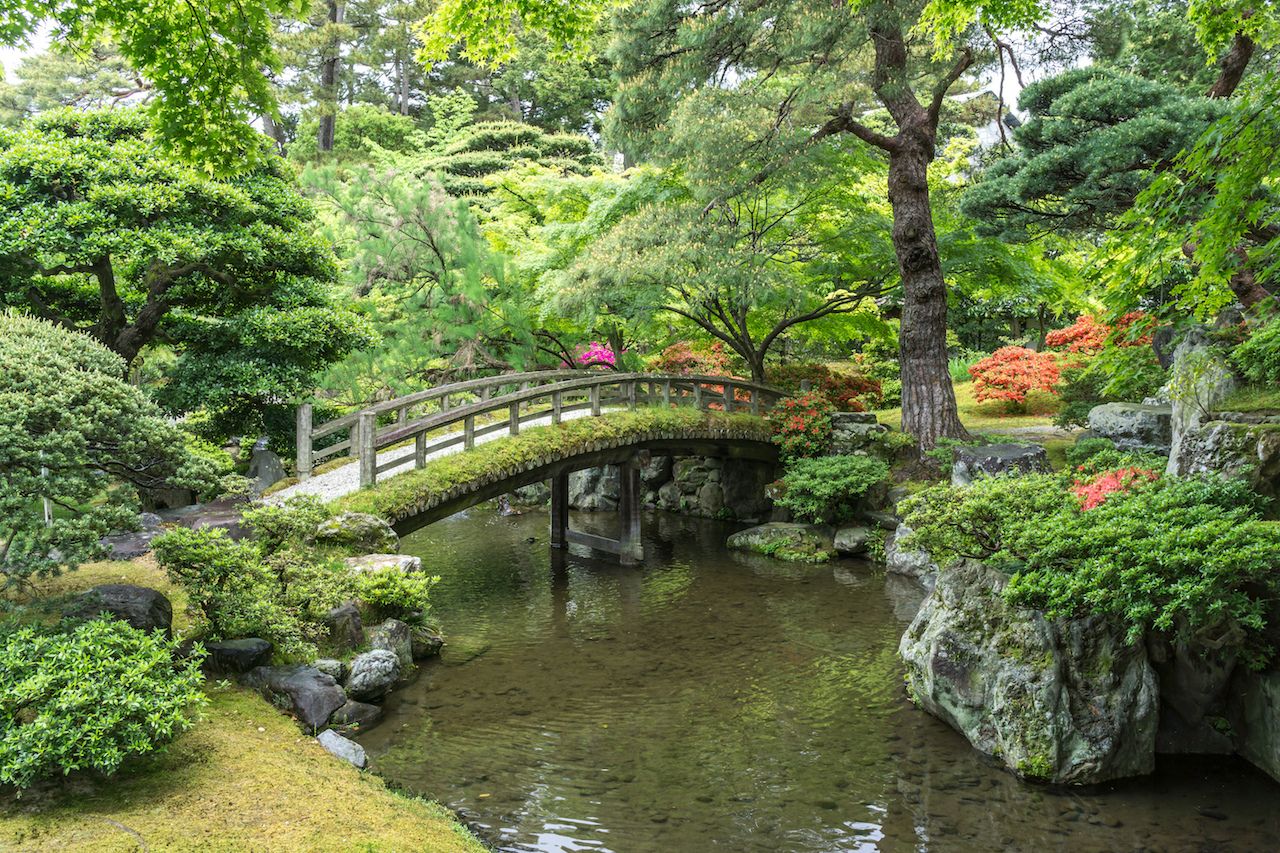 Kyoto Station is only two and a half miles from the Imperial Palace, but by car, the ride can take up to 40 minutes during peak traffic hours. Yet with the bike you’ve rented right at the train station, you can cycle your way north along the Kamo River and arrive at the Imperial Palace in an easy 20 minutes.

Even though it’s no longer the official seat of the emperor, which moved from Kyoto to Tokyo in 1868, you can’t go inside the Imperial Palace itself — but you can ride around the grounds of the Kyoto Imperial Park and check out many of the other buildings, like the Sento Palace and a mansion for court nobles.

From there you can get back on the Kamo River path and continue another two miles north to the Kyoto Botanical Gardens, which has well over 100,000 plants of more than 12,000 diverse species.

And the best way to see a lot of temples. 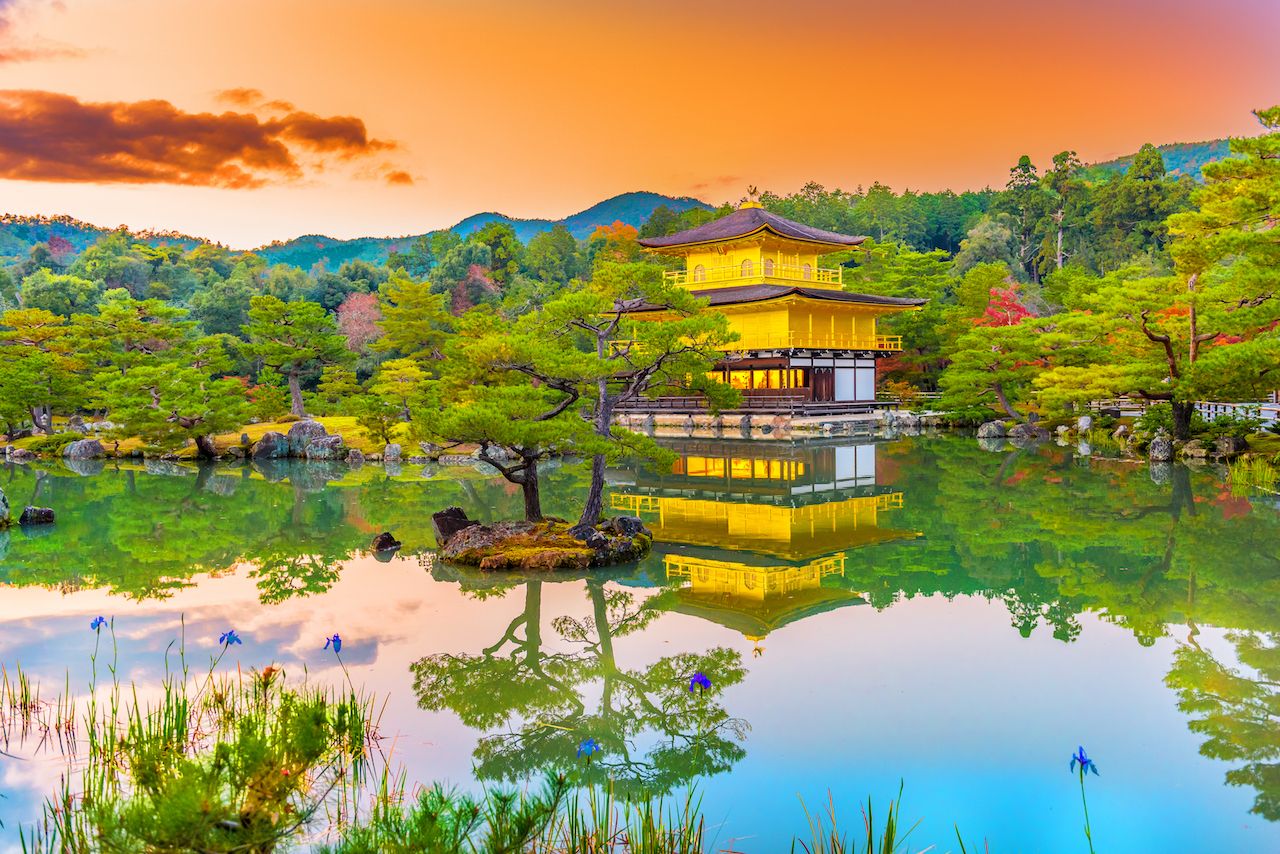 No visit to Kyoto is complete without seeing Kinkaku-ji, the Zen Buddhist Temple also known as Rokuon-ji or the Temple of the Golden Pavilion for the gold leaf that covers the top two of its three levels. The UNESCO World Heritage Site was actually rebuilt only six decades ago since the original 14th-century structure burned down.

The best time of day to visit Kinkaku-ju is later in the day to catch the dazzling afternoon sunlight reflecting off the golden sanctuary. The gleaming temple is itself reflected in the serene lake it overlooks.

Kinkaku-ji is only two and a half miles away from the Imperial Palace but close to several other temples and shrines. Since you’ll be on a bike, you can visit a few Buddhist holy places before heading up the hillside to Kinkaku-ji in that magical afternoon hour.

Temples near Kinkaku-ji that we recommend include Ryoan-ji, which is famous for its meditative and impeccably combed, dry-sand gardens. Beyond that is Ninna-Ji, which is also a World Heritage Site and one of our favorite temples. Dating to 888 but rebuilt post-fire in the 17th century, it has an impressive, multi-tiered pagoda; stunning gardens, both green and dry; and a lovely hillside setting with views of Kyoto.

You can ride along the Philosopher’s Walk. 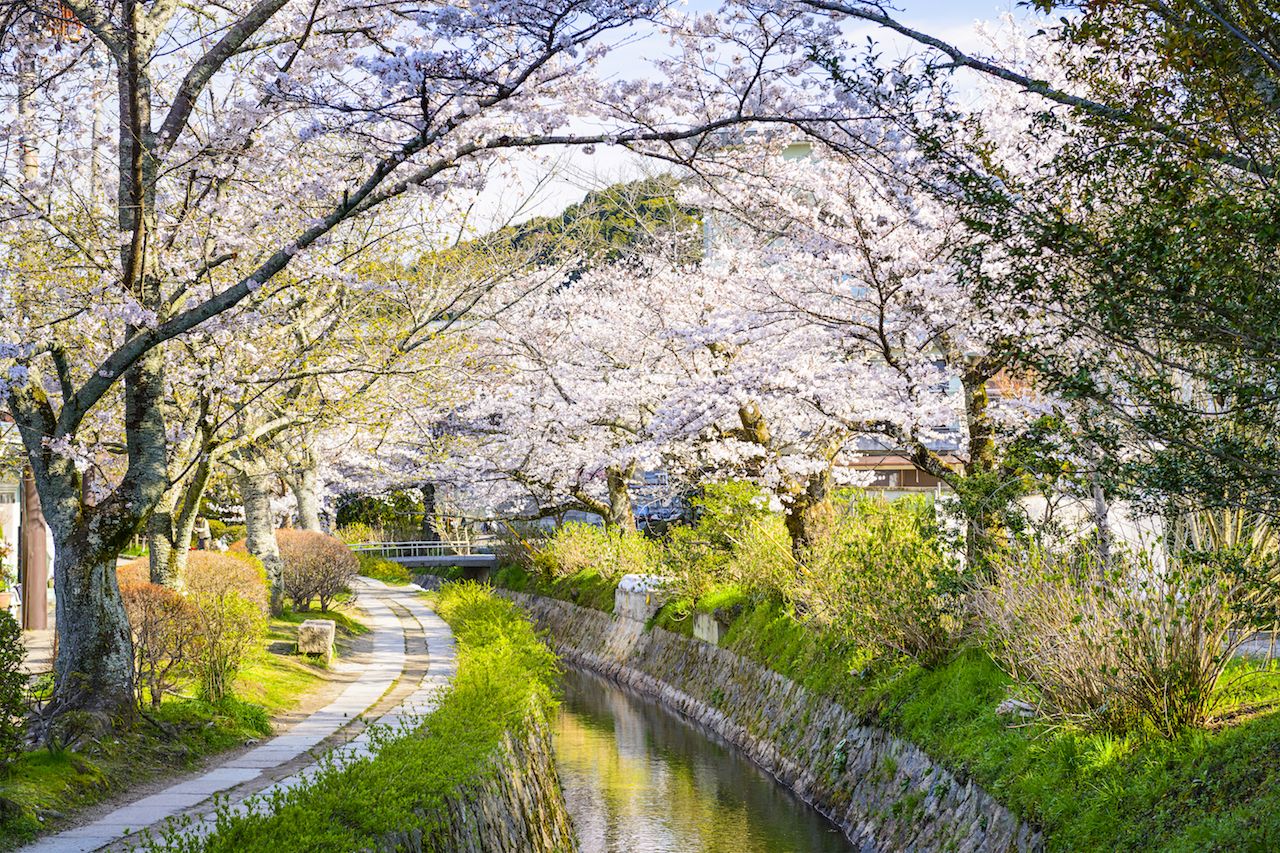 In the opposite direction of Kinkaku-ji lies the Philosopher’s Walk. The one-plus-mile path is named for a beloved Japanese philosopher, Nishida Kitaro, who used his daily walks to Kyoto University as a time to meditate. Winding under cherry trees along a picturesque canal, the Philosopher’s Walk is a great place to pedal your bike. That said, if it’s a weekend when the trees are in bloom, it will be packed with folks out for a stroll. On those days, bike first thing in the morning or in the early evening.

Near the Philosopher’s Walk, and beyond it in the foothills, are several more temples. On one end of the walk, Ginkaku-ji is the Temple of the Silver Pavilion. Although it was modeled on Kinkaku-ji and intended to be covered in a silver overlay, it never was. The moss garden, though, is lovely.

Locals love to visit the Eikando (formerly known as the Zenrinji) Temple in the fall as its trees burst in hues of gold, rust, and crimson. The Hojo Pond is lovely at that time of year but also in summer when the leaves are green. Not far, the Nanzen-ji Temple burnt down multiple times, but the latest iteration dates to 1597.

Also near the Philosopher’s Walk is the Heian Shrine, similarly easy to get to when you are cycling. It’s dedicated to the spirits of Kyoto’s first and last emperors. Entrance is free to the main building, but there’s a fee to enter the gardens. Right next door you’ll find The National Museum of Art, Kyoto and the Kyoto Municipal Museum of Art.

You can bike to a cafe or bar. 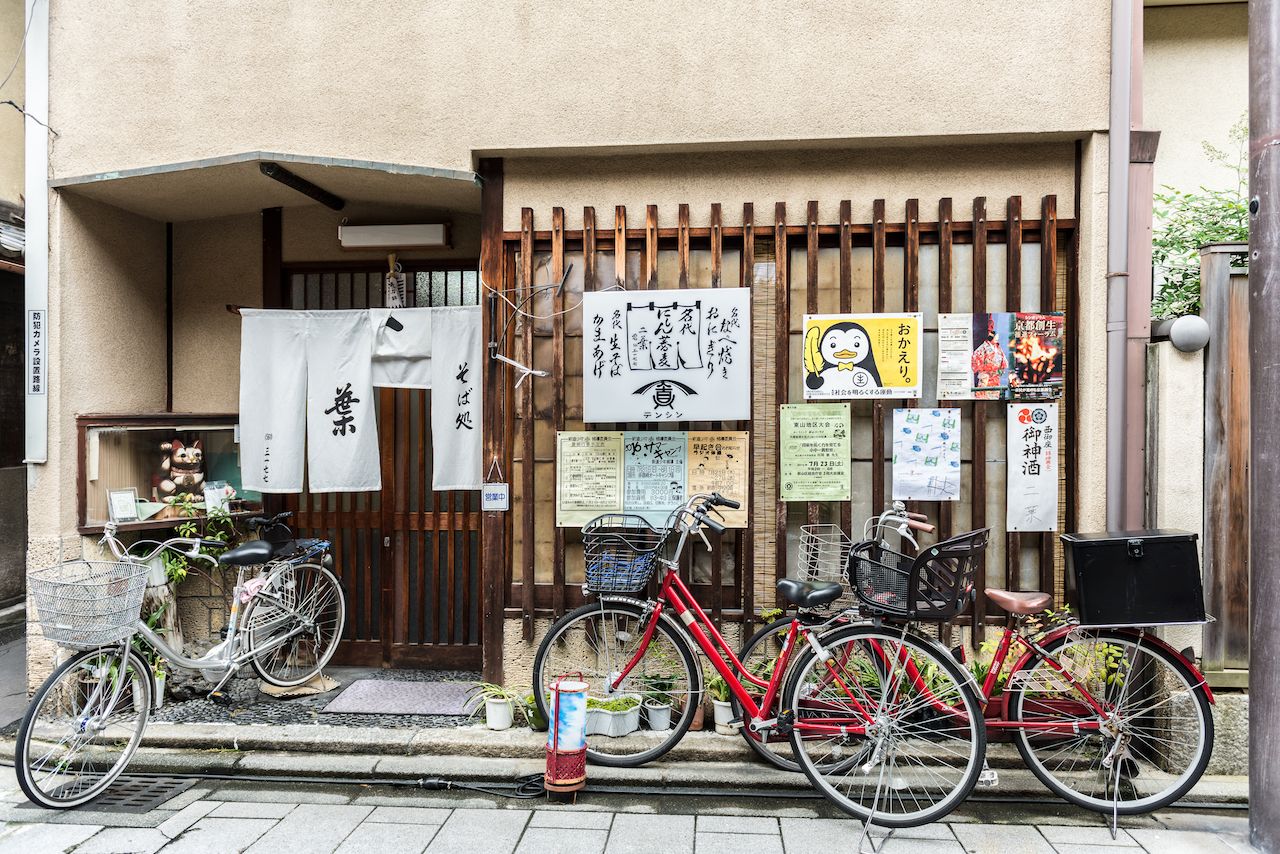 When you’re on a bike, you can cover more ground more quickly than if you were walking — so take a chance on that cute cafe in the lovely Gion neighborhood. You can also park your bike by a bar at night. Just note a couple of important things: First, it’s illegal to ride at night without a bike light. You should have gotten one when you rented the bike.

Second, this is not wine country. You aren’t on a bike so you can get hammered and still ride back to your lodging later. If you are visibly wasted, a policeman may stop you. Riding your bike while drunk is illegal. So while we love Kyoto by bike, if you guzzle too many sake shots, you are better off taking a cab.

You can also bike out of town. 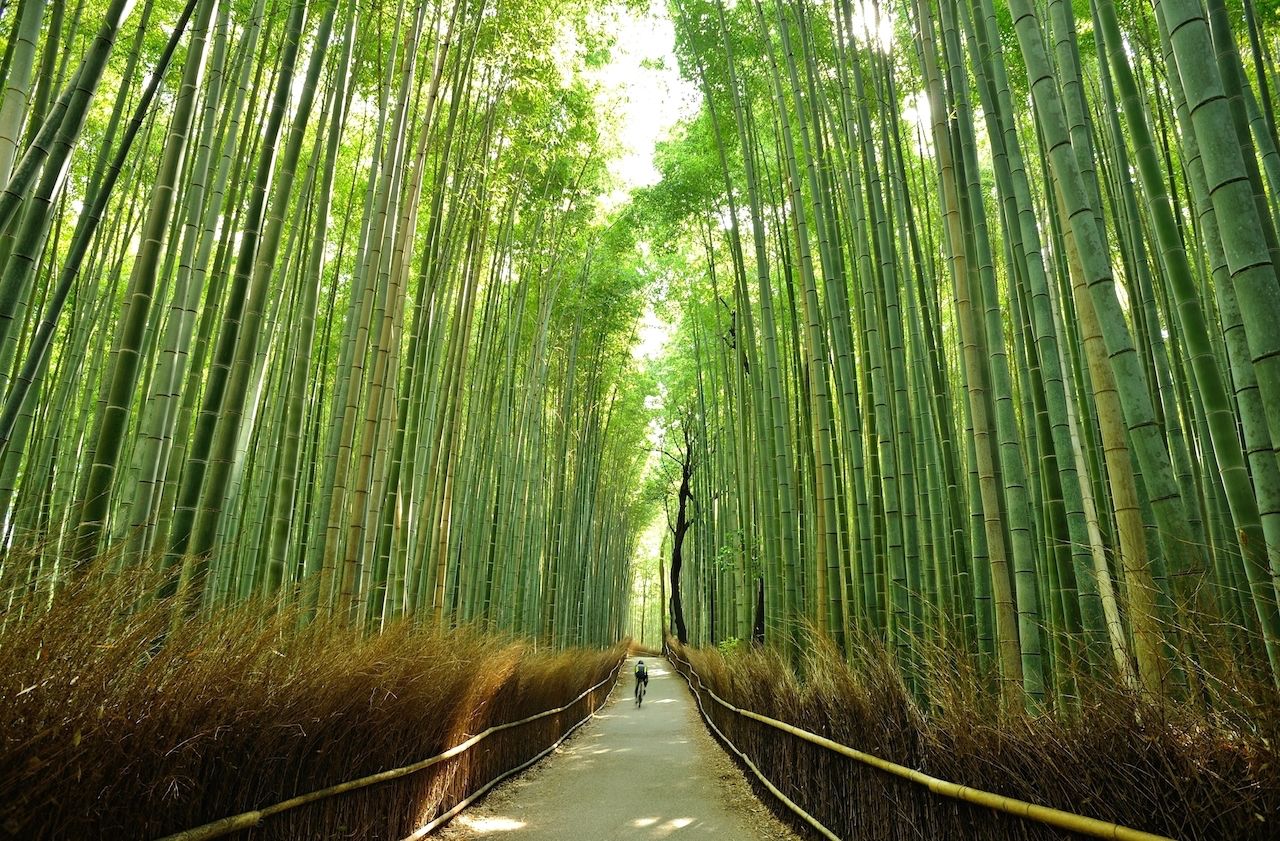 The great thing about a bike in Kyoto is that it shortens distances that would be too long to walk and more complicated by car. If you’re already by the Golden Temple, it’s just three miles to get to the outskirts of town and check out the bamboo forest at Arashiyama on the western edge of the city. Or if you keep following the Kamo River upstream, you’ll pass teahouses and forests of cedar. If you keep on pedaling, you’re in for an intense and beautiful climb into the wooded hills.

Cycling7 of the Most Scenic Biking Routes in Europe
Tagged
Cycling Kyoto, Japan
What did you think of this story?
Meh
Good
Awesome

Four Stunning Day Hikes You Need To Do in Kyoto

The 5 Most Breathtaking Shrines and Temples in Kyoto, Japan

8 Ways To Save Money on Your Trip To Kyoto

If I Had 1 More Day in Kyoto

The Samurai History of My Sashimi Knife

Notes on Running My First Marathon in Japan