AS TRAVELERS, we often seek “richer” experiences. Many of us want to leave home and belong at the same time in the places we visit. Before winter 2016, I had traveled to Central America twice. I primarily spoke English and spent all my time with fellow gringos, not having the language skills or the daring to step outside of The Lonely Planet hostel mindset. But, when I’d seen the same group of tourists getting drunk in three different places I knew that I wasn’t exactly breaking new ground.
As a result, I didn’t travel for almost five years. Instead, I went to school, connected with my home in Canada and established a career in photography and writing. Then the travel urge got into my system and refused to leave. I thought about Eastern Europe — too expensive. I thought about visiting a friend in England — too rainy. I thought about riding out another Canadian winter — I don’t ski. Then I heard about a cooperative in Guatemala called Nuevo Horizonte, a community founded by ex-guerilla fighters after the country’s 36-year civil war. And I would have the opportunity to be the first student in their soon-to-open Corazon de Maria Spanish school. I booked my ticket. 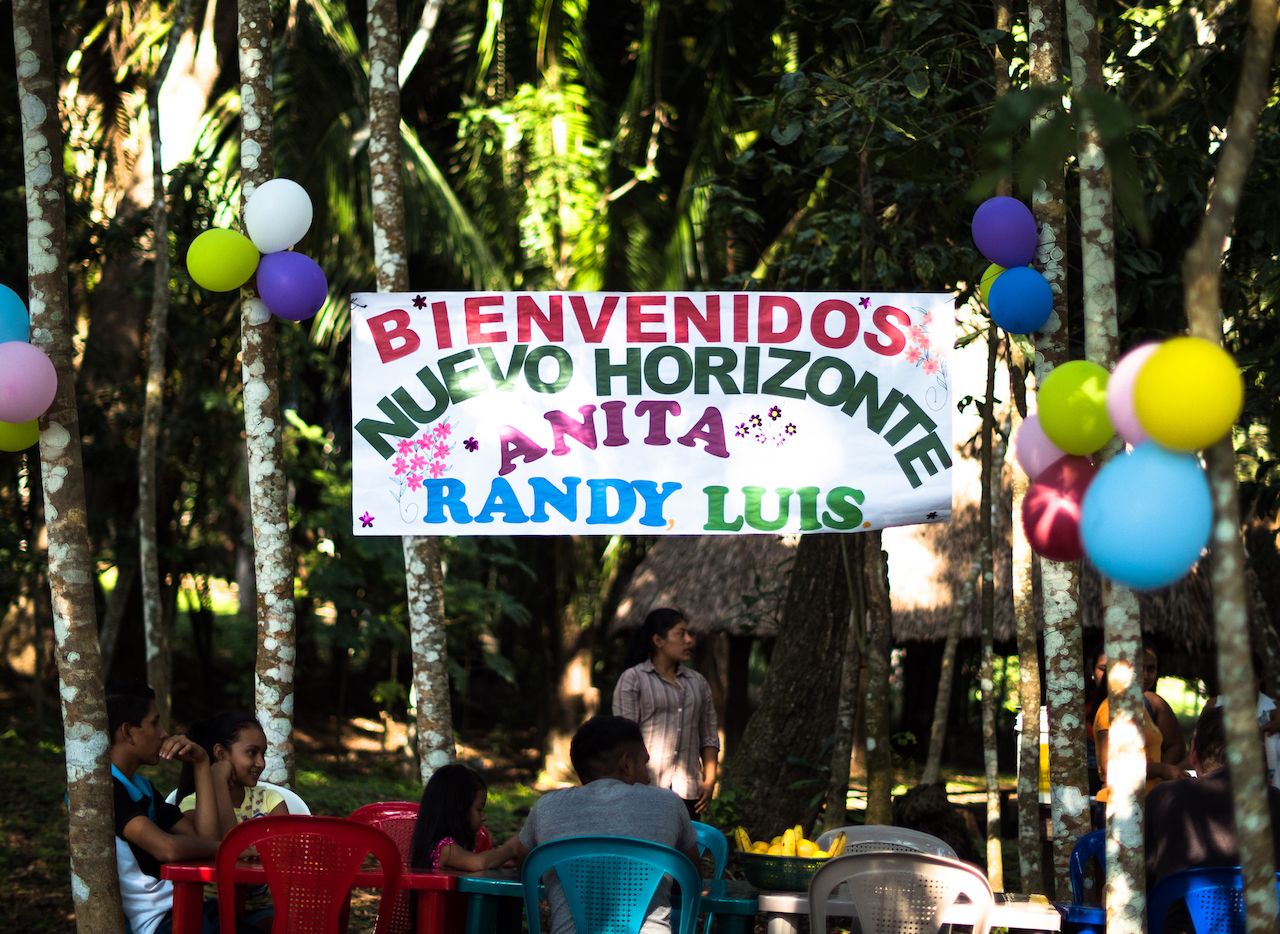 Nuevo Horizonte exists as an island of relative serenity in a country that continues to be wracked by violence and injustice. Located near Flores in the Peten, Guatemala’s northernmost province, Nuevo Horizonte is an eight-hour bus ride from Guatemala City and just 90 minutes from the Mayan ruins of Tikal. The pace is slow, the people hardworking and kind. The rock-riddled dirt roads are equally safe in the early morning when children walk to school, at mid-day when lazy dogs bake in the sun, or at midnight when crickets chirp and fireflies dance in the darkness. There are murals depicting the heroes of revolutions and anti-imperialism (Che, Castro, Lenin, Arbenz, Marx and Marte), as well as the personal history of the guerrillas all over public buildings.

There is a steady rhythm to life here. None of the roughly 500 inhabitants are rich. Life isn’t perfect. Chickens patrol some kitchens. But compared to the struggle many of the residents have lived through, the current routine and stability are welcomed and beautiful.

In 1954, thanks to brotherly love between the United Fruit Company and the CIA, a coup was orchestrated in Guatemala to oust president Joseph Arbenz who was continuing the work of his predecessor Juan José Arévalo in agricultural and social reform. A major part of their work involved attempting to release the stranglehold United Fruit had on the country, which threatened the company’s grossly profitable enslavement of people, infrastructure, and government. After a smear campaign against the “vicious dictator” Arbenz, and aggressive lobbying in Washington, democracy was out and violence was in.

In 1960, the civil war officially began. In 1996, peace accords were signed between the government and weary guerrilla groups — who had spent close to 20 years traversing jungles and sleeping in hammocks. They didn’t let life stop for them. Love was found, babies were born on the run, children were taught how to read and write on scraps of paper. The mountains provided shelter and sustenance for those who were fighting an uphill battle for freedom.

When the war ended, many of the guerrillas had lost everything material and so Nuevo Horizonte was created. It was a collective mustering from 90 families of one of the groups, the Rebel Armed Forces (FAR). A 900-hectare, barren cattle ranch was purchased thanks to bank loans, and the settlers began a new life. The group built concrete houses, planted trees and began sustenance farming. Bound together by struggle and with an eye to the future, the cooperative progressed: The agriculture became commercial, schools were built, a tilapia fish farm was started in the lagoon, a forest park was created, a commercial pine tree plantation was started, trees and children sprouted and grew. 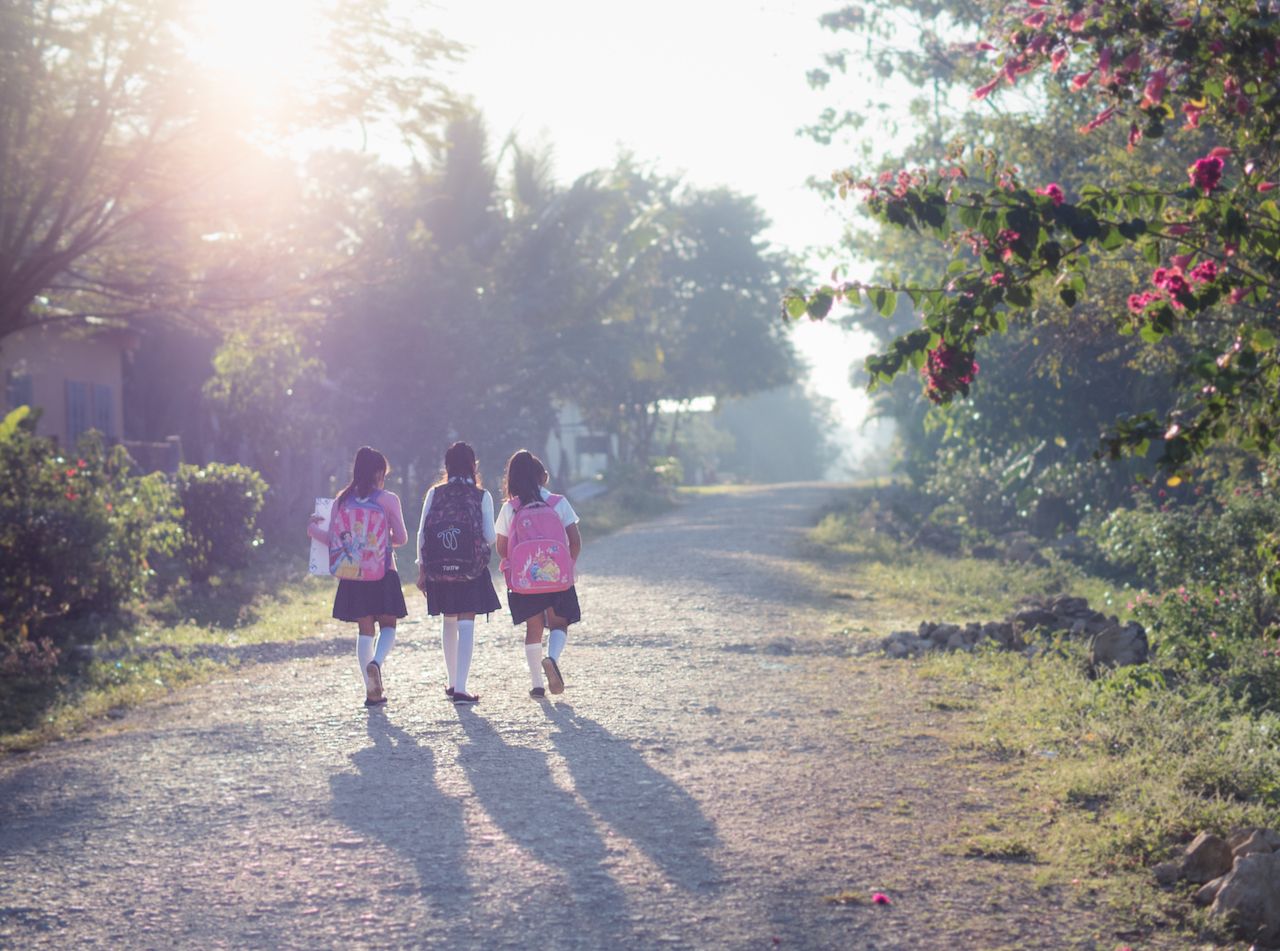 I crossed the highway that runs between Guatemala City and Flores at kilometer 443 and was met by a young man named Alvaro. He was to be one of my teachers or maestros, and like many of the people here, he struck me as mature beyond his years. The Spanish school was envisioned and put together by a group of eight people, all but two of whom are between the ages of 16 and 21. Along with the help of more experienced educators, they designed a comprehensive curriculum that can be shaped to each depending on their incoming level of knowledge. During my time at the school, I was joined by two students, one of whom knew very little Spanish and one who had a fairly comprehensive grasp of the language. I was somewhere in the middle and yet we all felt like we were moved along at the right pace.

The nuts and bolts of teaching in Spanish schools are much the same. Being a grammar-heavy language, there really isn’t a way around learning pronouns, possessive adjectives, indirect objects, and the infamous verb conjugations. There are over forty different forms a single verb can take depending on who said it, when they said it, and which direction the wind was blowing at that particular moment. This in-class basic language instruction is fundamental and what’s really needed is a good teacher who knows their stuff and a willingness to persevere through some frustration. While the teachers at Corazon de Maria are skillful, patient, and passionate, what really separates the school from others is everything that happens outside the classroom.

Extra-curricular activities are organized by the maestros, varying from student to student based on their interests. One afternoon I casually mentioned to someone that I had once enjoyed horseback riding and within days found myself trotting off to a distant lagoon on a trusty steed. I took part in a campout in the jungle, movie and dancing nights, soccer and volleyball games, and tours of the fish farm, pine forest, mandarin orange plantations, and museum. They and the school were all conducted in Spanish, so the experience was a sink or swim immersion with plenty of friendly flotation help along the way. 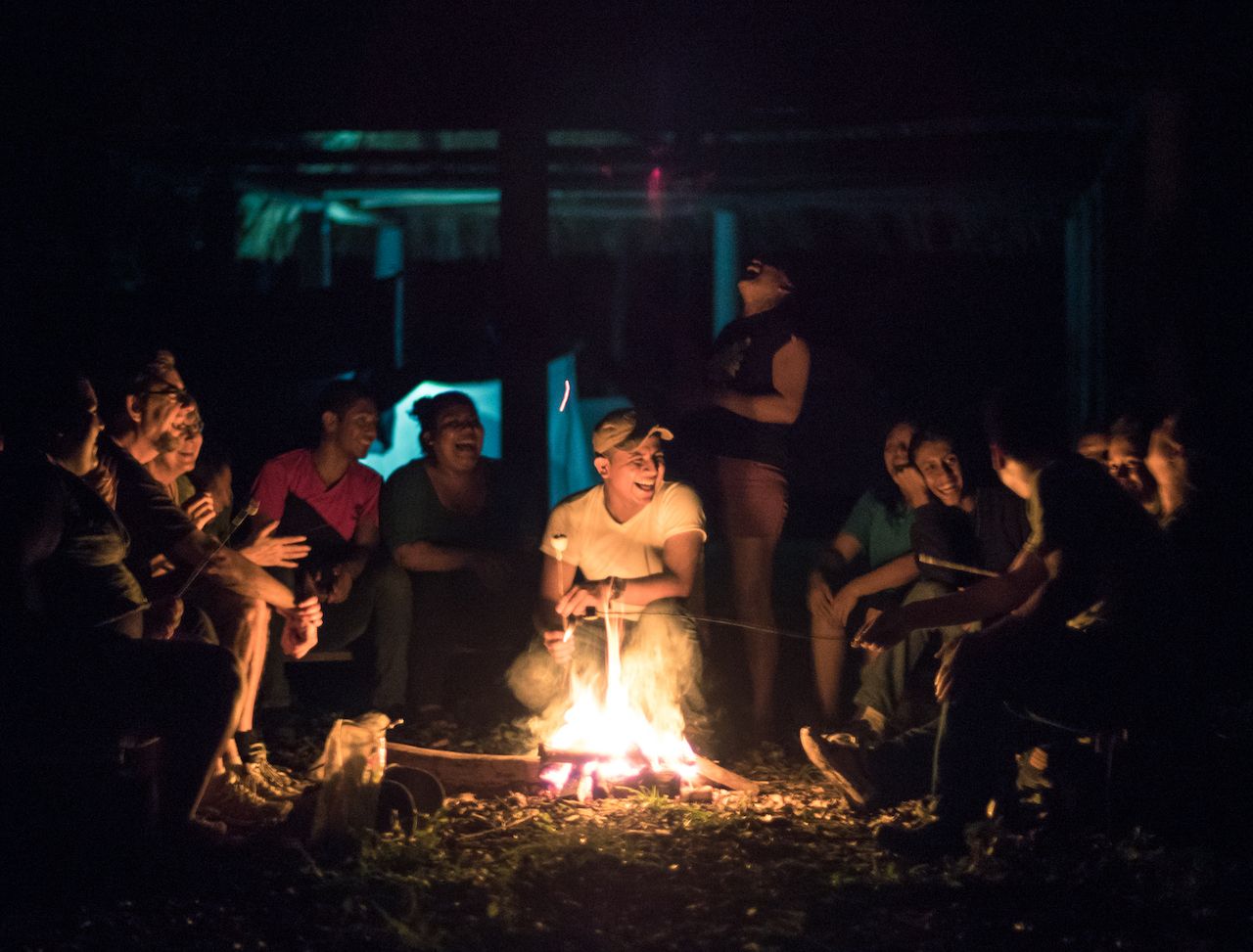 The breakfasts and dinners that are served in the homes of families in the cooperative take the student deeper. These offer a chance to put the theoretical knowledge into practice and allow for a different perspective on the lives of people in the community. The food is predominantly traditional, with tortillas served alongside every meal. The hosts and hostesses don’t go out of their way to “gringo it up”, which I greatly appreciated. I don’t travel to eat the comfort foods of home but rather to do my best to live in rhythm with local inhabitants, a notion that is highly regarded in Nuevo Horizonte. The cooperative believes the best way to understand one another is to experience the authentic existence of another person.

Perhaps the biggest reason that Nuevo Horizonte will inevitably draw me back is the people. They carry with them a joy for life that shines through hardship both past and present. The adults carry stories with them that can shatter your heart, yet their spirits are still intact and radiating love. There seem to be no signs of PTSD from the horrors they were subjected to, perhaps because these were swallowed up in the bonds of community and building a future for their children. 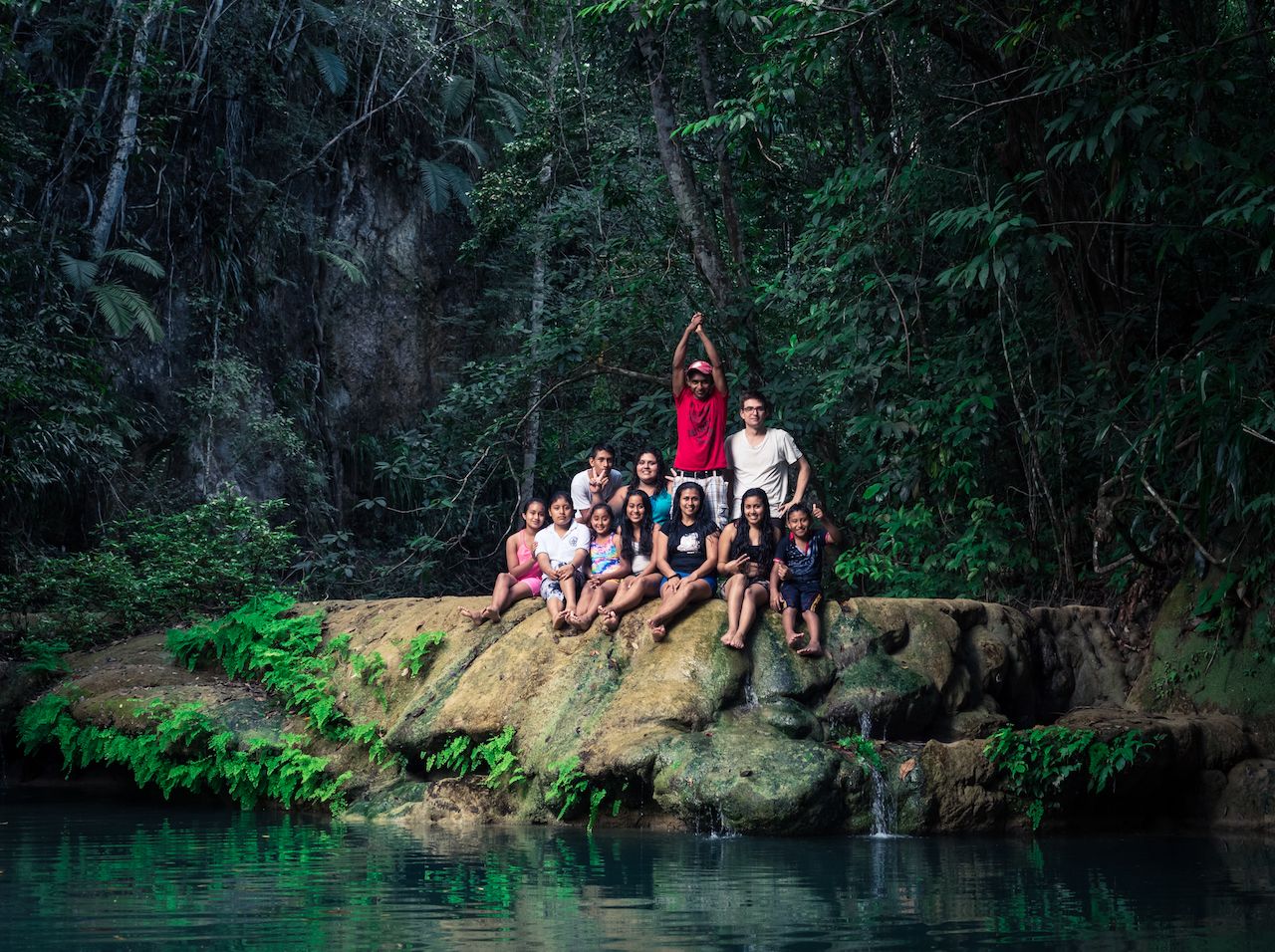 Due to their baby boom following the war, half of Nuevo Horizonte’s inhabitants are under the age of 18. The schools are full, as are the soccer fields. These young people are living an existence their parents never experienced. They are given the freedom to choose their path, to play, to fall in and out of love, to rebel, to reunite. They are taught their history and they are proud of it. They understand and appreciate the sacrifices that were made. Because of this transparency surrounding their roots, they are given a chance to break the cycle of history. Guatemala can’t afford to lose another generation to the greed of foreign interests.
I wanted to learn Spanish because, without a shared language, I find it difficult to share a deeper communion. After three weeks of class, I’m still not able to get into the finer points of economics or history. My conversations still traverse a general loop of vocabulary but that loop has expanded — as has my ability to discover experiences that aren’t advertised in guidebooks or online forums. A Guatemalan woman on an overnight bus offered to take me on a food tour of Guatemala City, a place all tourists say to avoid because it’s dangerous. A Colombian man on a plane recommended a family in the mountains of Guatemala to stay with. “They’re wonderful people,” he said and he was right. A wrinkled grandmother shared her knowledge of where to find guitar strings in the thick of the Santa Elena market. Her directions were impeccable. I found what I needed — just as I have found what I needed in the people of Nuevo Horizonte.
If you would like to learn more about the Corazon de Maria Spanish school and Nuevo Horizonte please visit their website. They’ll welcome you with open arms, plenty of laughter, and hearts of gold.

Editor’s note: All photos are the author’s.

ActivismEveryone Thinks Guatemala Is Dangerous. Here’s Why I Can’t Wait To Go Back There.
Tagged
Guatemala
What did you think of this story?
Meh
Good
Awesome

Guatemala Has the Most Colorful Easter Traditions in the World