Nicknamed South Africa’s Pink City by the LGBTQ community, and affectionately known as the Mother City to all South Africans, there is no place on Earth quite like Cape Town. From the exquisite natural beauty of its mountains, oceans, and Winelands to the buzzing nightlife and exciting culinary scene, there are many reasons why Cape Town should be on any traveler’s bucket list. For LGBTQ travelers, Cape Town is the undisputed queer capital of Africa, with an inclusive culture and community that grows stronger each year.

Safety is often a concern for visitors in Cape Town due to the country’s high crime rate. The sad reality is that crime does happen. Hate crimes and instances of homophobia still occur — as they do anywhere in the world — but this should not deter you from traveling to Cape Town. As a general rule of thumb, keep your belongings close and avoid walking alone at night. This is something that locals will recommend and practice themselves. Aside from this, South Africans are generally very friendly and will be sure to make you feel as welcome as possible. 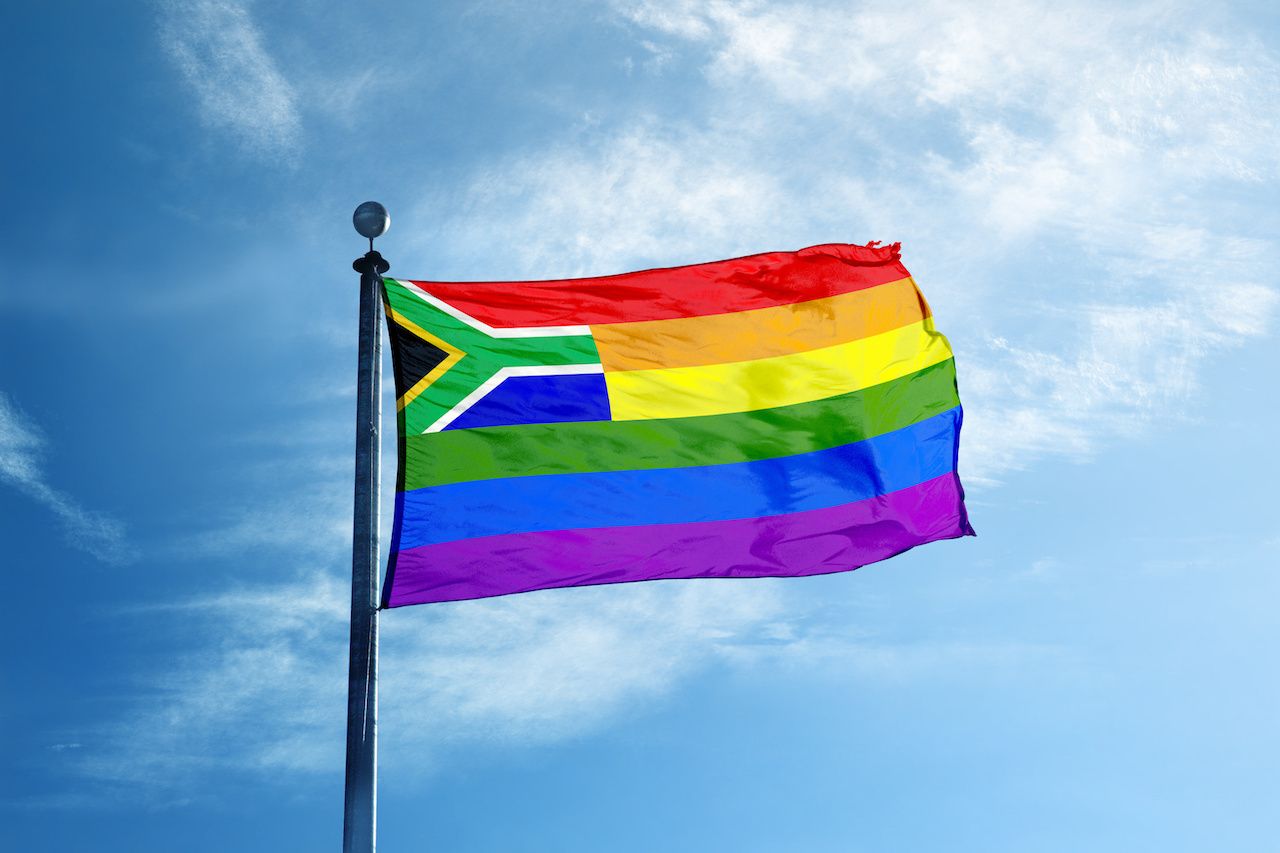 South Africa has a complicated and tragic history of discrimination influenced by colonialism and apartheid. Under the apartheid regime from 1948 to 1994, homosexuality was a crime punishable by up to seven years in prison. Several gay rights organizations were formed in the 1970s, but until the 1980s, the groups were divided racially. Many prominent white members of the gay community endorsed the ruling National Party.

Since the end of apartheid, the South African constitution has made a concerted effort to ensure equal rights for all. South Africa’s post-apartheid constitution was the first in the world to outlaw discrimination based on sexual orientation. Gay marriage has been legal in South Africa since 2006, making it the first, and to date the only, African country, and only the fifth country in the world, to do so. 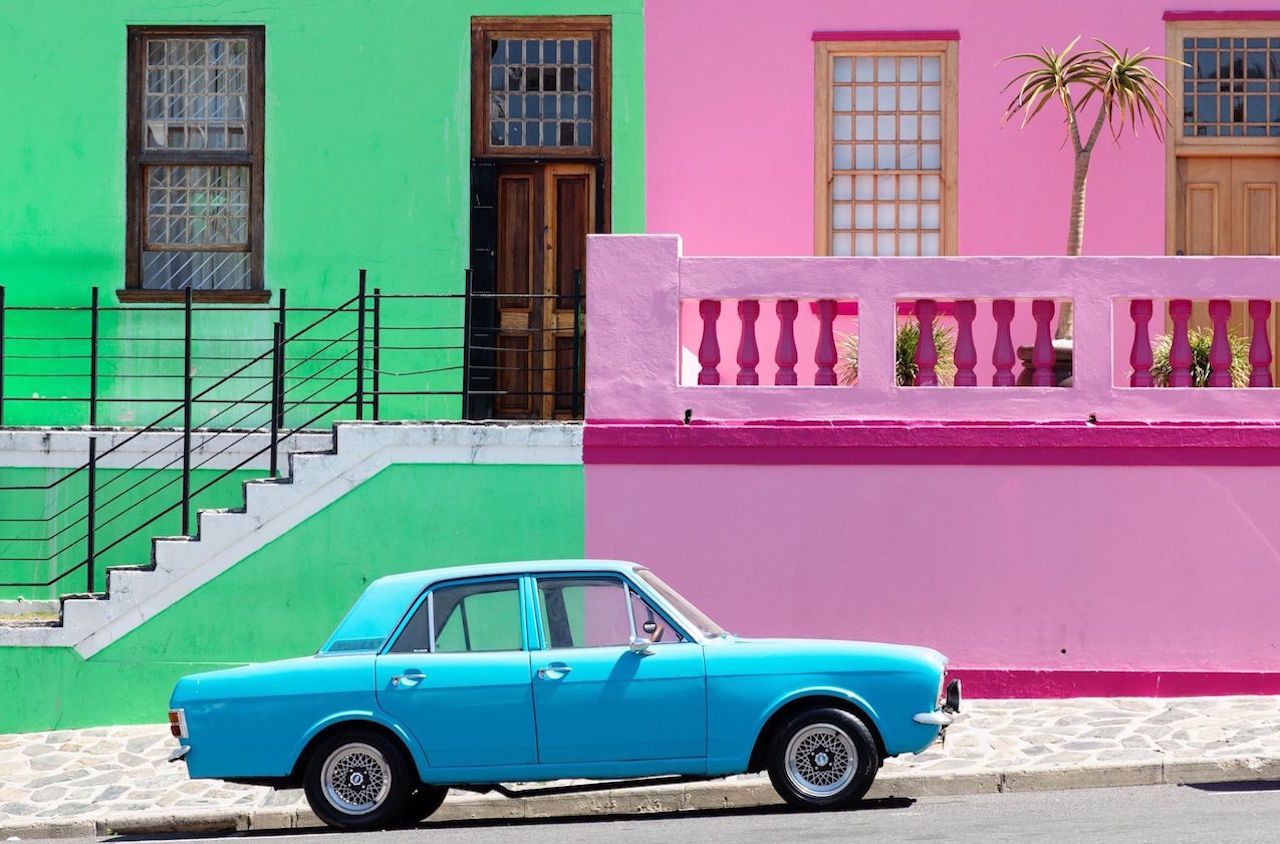 You’ll find LGBTQ and LGBTQ-friendly spots all over the city. However, De Waterkant is Cape Town’s quintessential “gayborhood.” Here you’ll find an enclave of hipster coffee shops, vibrant restaurants, fashionable boutiques, and many of the city’s most popular gay bars and restaurants.

De Waterkant is also Cape Town’s most colorful district in every sense of the word. Many of the historic Georgian and Cape Dutch-style buildings lining the street are brightly colored. For the ultimate rainbow fix and a taste of local Muslim culture, make your way up to the gorgeous Bo-Kaap (the higher end of the Waterkant). The former Cape Malay quarter is known for its picturesque houses painted every color of the LGBTQ flag. 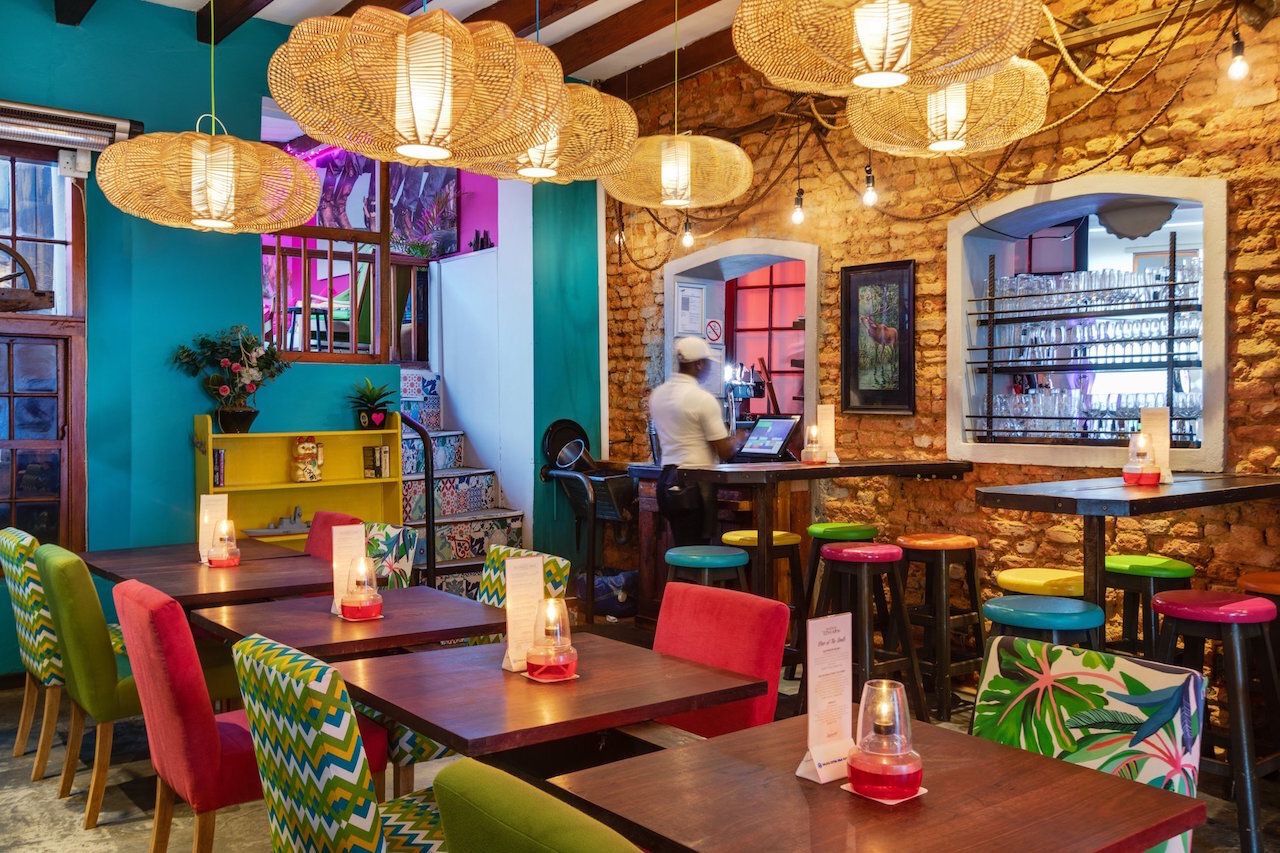 Café Manhattan is an institution. In fact, it’s not only the longest standing LGBTQ restaurant-bar but also the longest standing venue in all of De Waterkant village. Here you can enjoy a wide variety of tasty eats, fantastic happy hour deals, and cocktails well into the night. It’s a quirky Wild West-style spot that’s sure to make you feel like you’re part of the family.

One of Cape Town’s signature LGBTQ club-bars, Crew Bar always guarantees a wild time. If you want to dance the night away with sexy go-go dancers, half-naked bartenders, and enjoy theme nights, Crew is the place for you.

Pink Panther is one of Cape Town’s most popular LGBTQ nightlife spots. At its core it’s a dance club, playing mostly pop music. For a little bit of luxury (and to avoid lines at the bar) you can get a VIP booth and table service. The bar staff is well known for its warm hospitality. 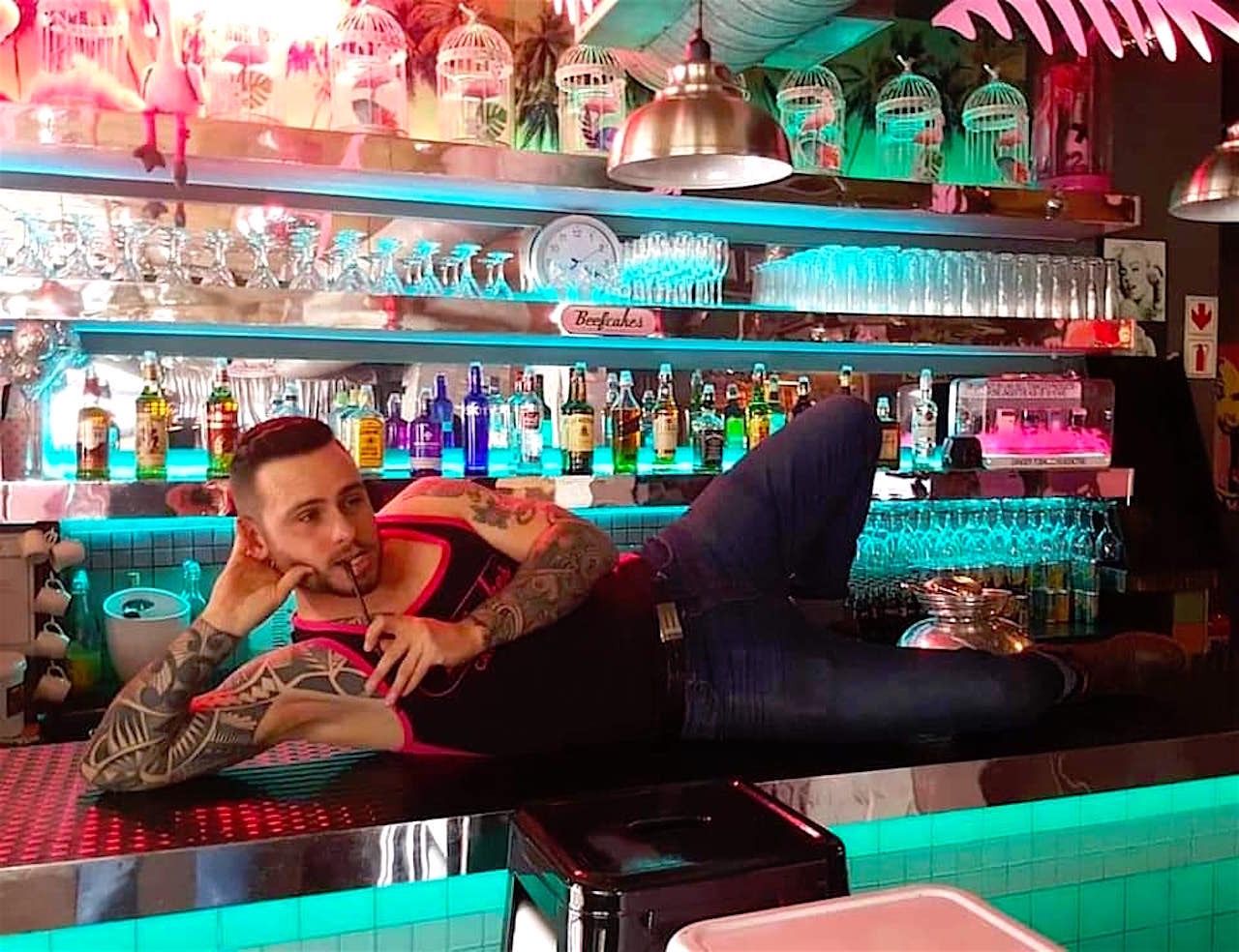 Fancy a burger and fries and a drag show on the side? Beefcakes is a well-known establishment thanks to its always-fun combination of seriously hunky waiters, delicious diner-style eats, and hilarious drag performers. While Beefcakes has become a bit overrun with bachelorette parties, it’s still worth popping by for a show or their weekly Bitchy Bingo.

A club that’s loved by the local LGBTQ community, Zer021 Social Club is best known for its drag shows and live entertainment. It also boasts some of the most reasonable drink prices around. The crowd here tends to be very diverse — everyone is welcome. Keep a lookout their Facebook page for their next event.

Owned by the same people who brought us Zer021, Berta’s is an all-inclusive restobar. It hosts regular, free-entry drag shows, quiz nights, and often has drink and meal specials. Expect awesome pub-grub and chilled vibes. 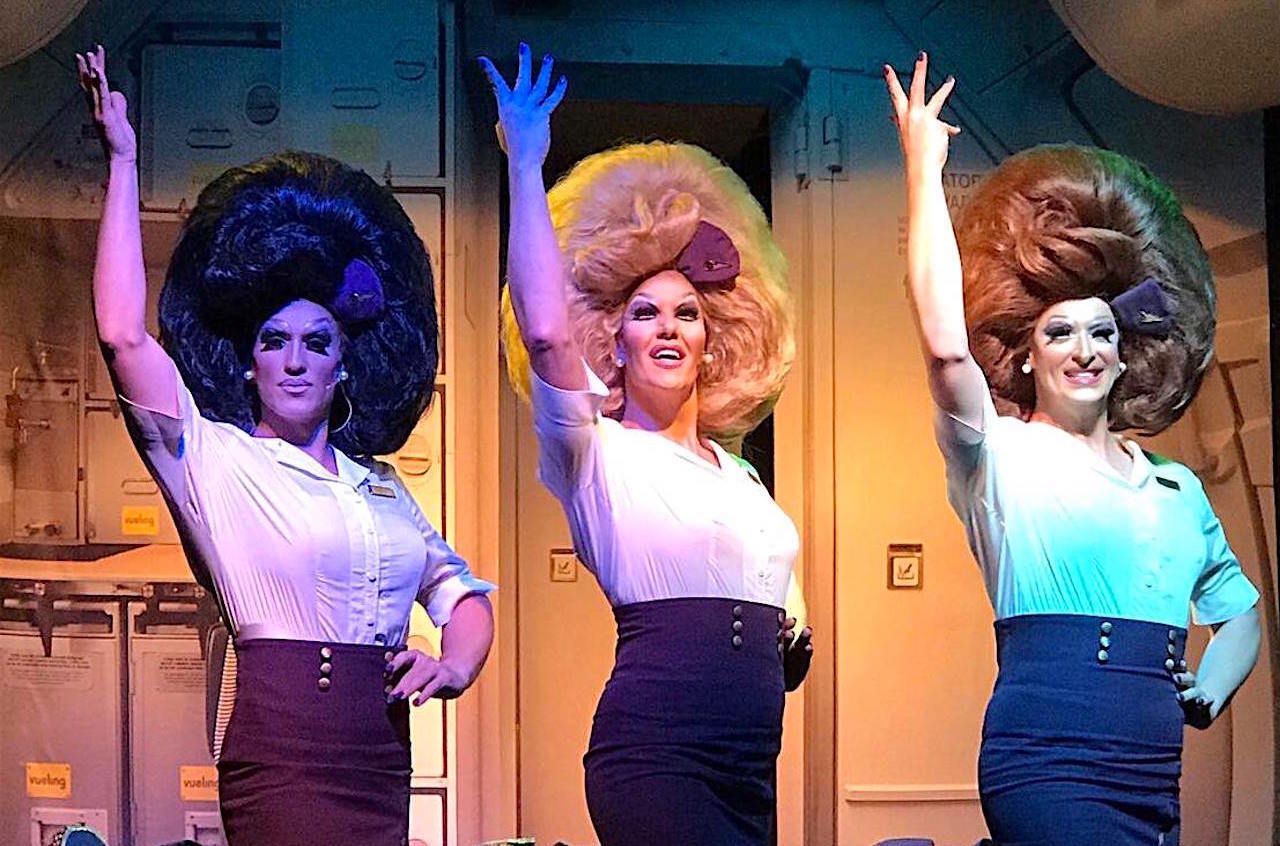 Gate 69 is a real treat for those who love a bit of theater. For a full drag or comedy show head on over to this immaculate cabaret theater. Booking is essential as the intimate space only allows for up to 90 people. Tickets include a designer mezze platter served on a double-tiered Lazy Susan, along with soup and bread service and purple Patron ice-cream for dessert.

Where: 87 Bree Street, Corner of Bree and Hout Street

Versatile is a men-only bar that provides regular bar service from Sunday to Tuesday and hosts themed nights from Wednesday to Saturday. Wednesday is underwear night — wear your best briefs, Thursday is naked night — don’t wear anything, and Saturday is fetish night — wear whatever you want. 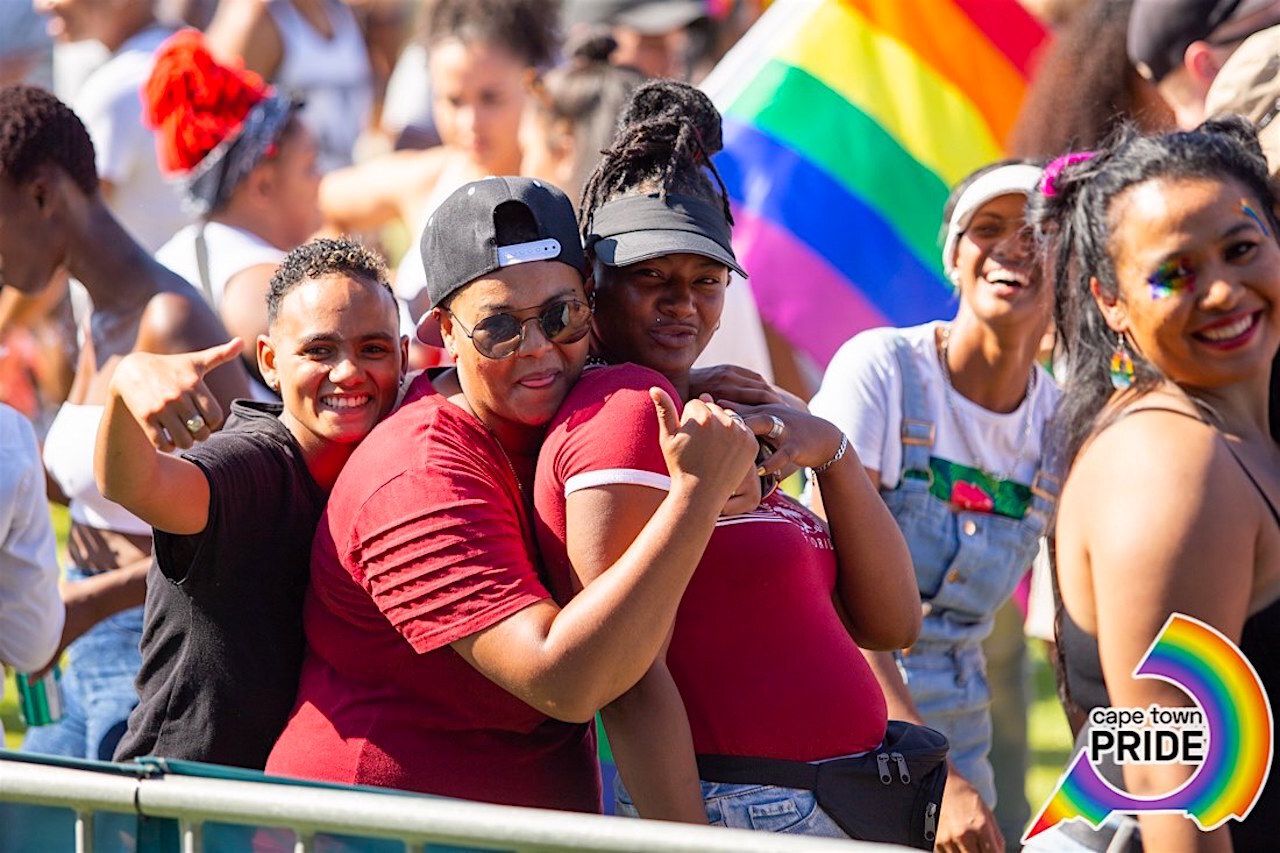 Cape Town Pride usually occurs from the end of February to early March. February is Cape Town’s dry season, and while March marks the end of summer, it’s usually still bright and sunny around that time of year. It is also just off peak season, meaning flights and accommodation will be well-priced.

Cape Town Pride is unique in that it is one of the more diverse pride festivals around the world. As well as a parade, you can enjoy parties, competitions, art, poetry, karaoke, book readings, and even a fun run. You’ll see LGBTQ people of all races, ethnicities, and abilities. As well as a celebration of the LGBTQ community, it is also a celebration of Africa with much of the costuming paying homage to African cultures and heritage. 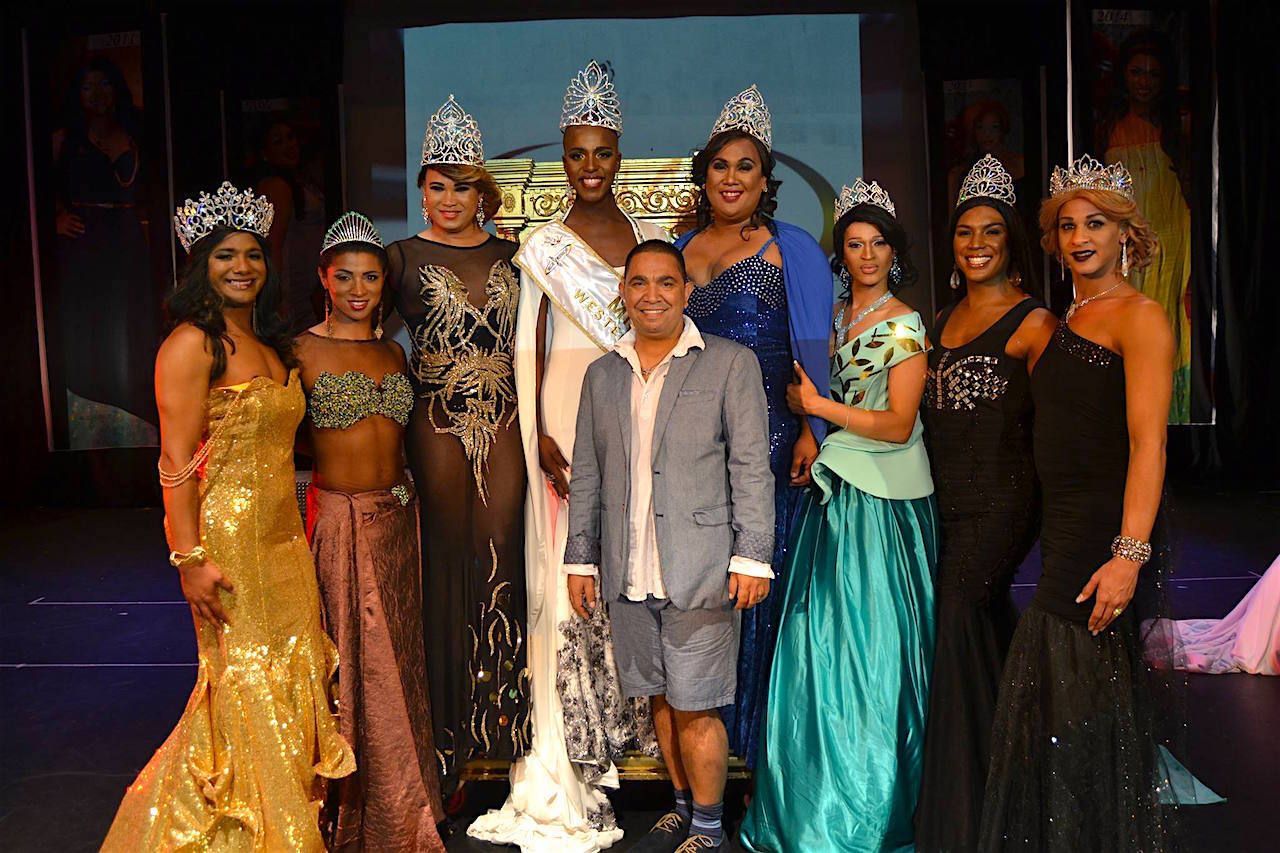 The Miss Gay Western Cape pageant has long been a platform hosted by transgender men for LGBTQ people. Prior to 1996, the pageant was held in secret, but now they’re loud and proud. Miss Gay Western Cape occurs annually, usually in early November. Each year’s winners will work to provide community service to those in the queer community, particularly those affected by HIV and AIDS. Miss Gay also educates, promotes, and celebrates drag culture in underprivileged communities through pageants, events, and educational workshops.

MCQP is an annual blowout in which LQBTQ guests will dress up to a certain theme and showcase their creations on the pink carpet. Again, what used to be a small underground gathering is now one of the largest parties in the city. Usually taking place around the festive season in December, MCQP hosts a variety of local and international music talents to ensure a memorable night for all. 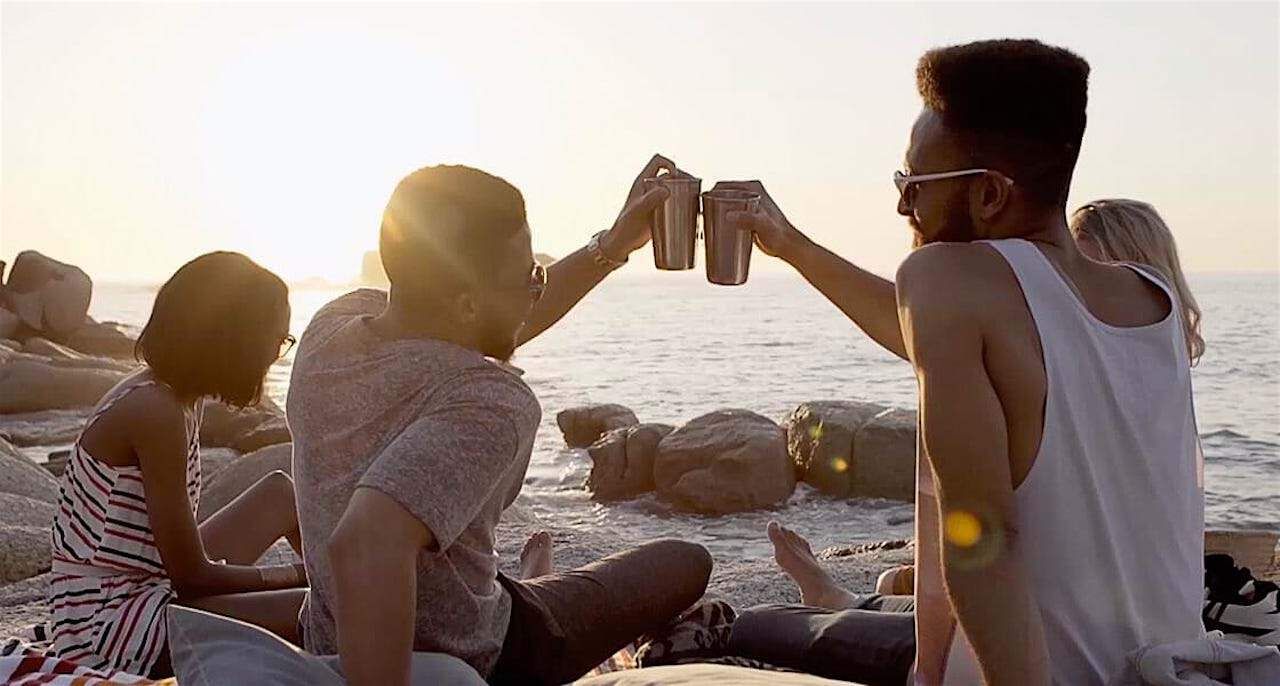 Cape Town is home to some of the most pristine and picturesque beaches in the world. It’s also home to both the Atlantic and Indian Ocean, and you can watch the oceans meet at the stunning Cape Point. The beaches that form part of the Atlantic seaboard are much colder than those along the Indian Ocean, meaning that they are simply too cold to swim in and are therefore more popular with local kitesurfers than beachgoers.

Certainly one of the busiest beaches in Cape Town, Clifton Third Beach is a popular hangout for local gay men. It’s also located in one of the most affluent suburbs. As you bathe in the African sun you can enjoy the views of some of the finest mansions in the city as well as pretty turquoise waters.

Sandy Bay is Cape Town’s resident nude beach and is often frequented by the LGBTQ community. Of course, you don’t have to go nude here, but you’ll most likely be the odd one out if you don’t. While it’s not the easiest beach to get to — you can either clamber over rocks or take a 20-minute walk from Hout Bay — if you do make the trek, you’ll be rewarded with gorgeous white sand and rocky shorelines. The waves here tend to be pretty fierce making it popular for surfing. 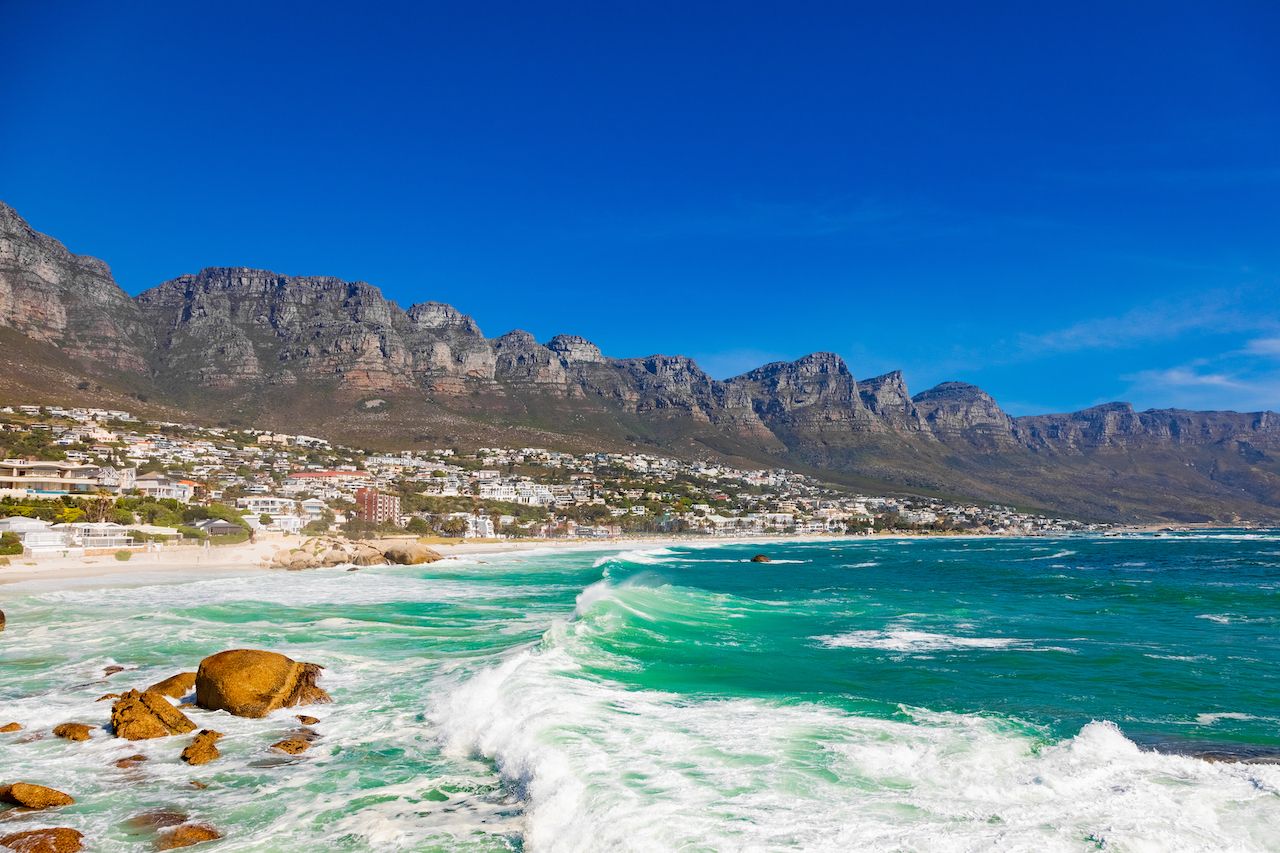 Camps Bay is an upmarket area with a palm-tree-lined promenade that stretches all along the sandy beachfront. The promenade is lined with trendy restaurants, bars, and cafés frequented by the local LGBTQ crowd. With its backdrop of Lion’s Head and 12 Apostles mountains, its beauty is hard to resist. Fun fact, Camps Bay was the setting of the virtual town of San Junipero in Black Mirror — which we all know was one of the greatest queer love stories of our time.

The Hot House Steam and Leisure

Not much of a beach person? Head over to Hot House — a stylish and upmarket, men-only steam bath and adult store. It’s pure luxury with a fireplace, lounges, a bar, and a sundeck overlooking the city. Aside from a massive steam room, two spa baths, three video lounges, maze, and showers, there are private rooms and paid cabins with double beds, TVs, and air conditioners. It’s said to be one of the finest gay saunas in the world. 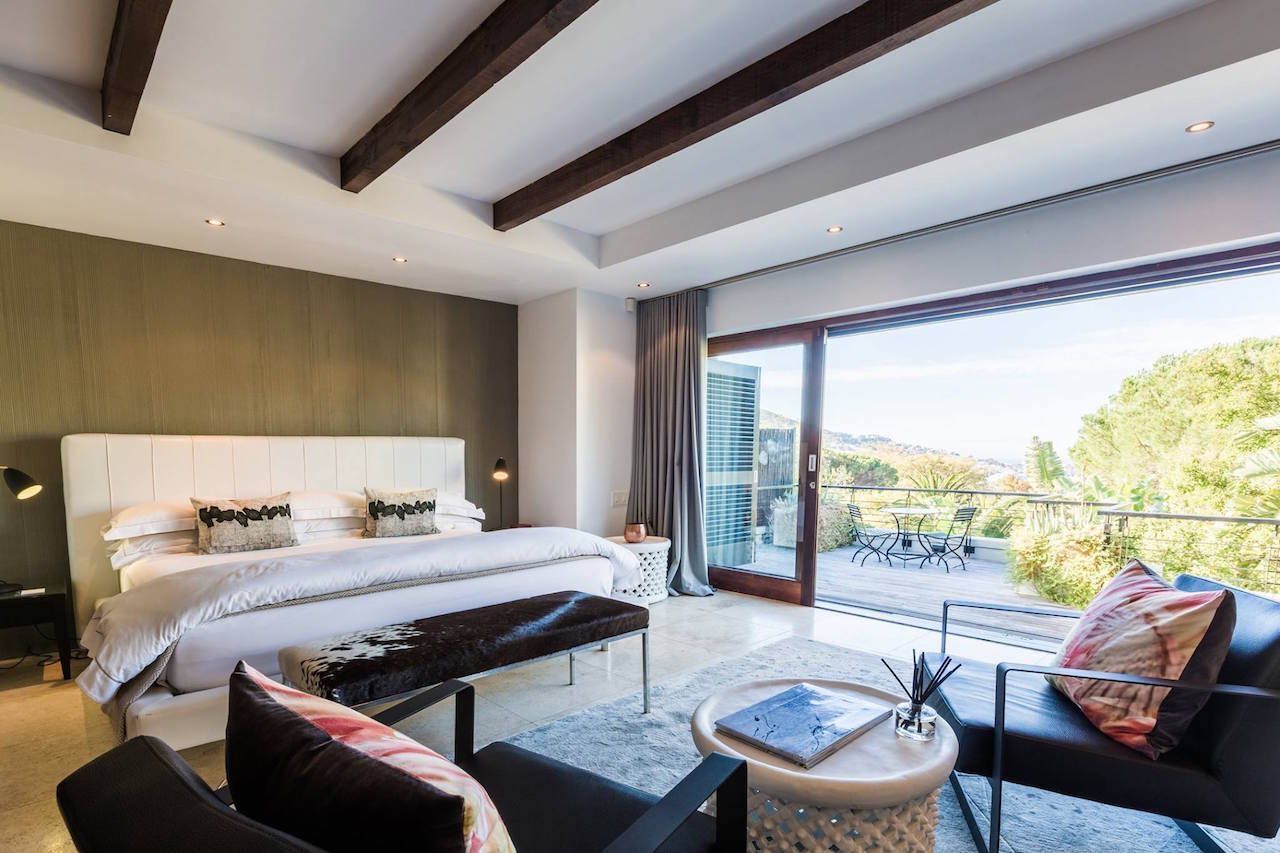 Kensington Place is a gay-owned luxury boutique hotel nestled on the slopes of Table Mountain. The hotel has just nine rooms, and each is decorated differently, but all offer king-size beds, underfloor heating, and balconies with garden, sea, and city views. They’re often praised for impeccable service.

This gay-men-only bed and breakfast is located just outside of Cape Town and is a stylish and quiet home away from home. Enjoy sweeping views of the mountains and sea along with a pool, sauna, and jacuzzi. A decadent breakfast is included daily, and massages are also on offer. Pink Rose offers small group tours and is in close proximity to the exquisite Cape Winelands, making it an ideal city break.

The Glen Boutique Hotel and Spa 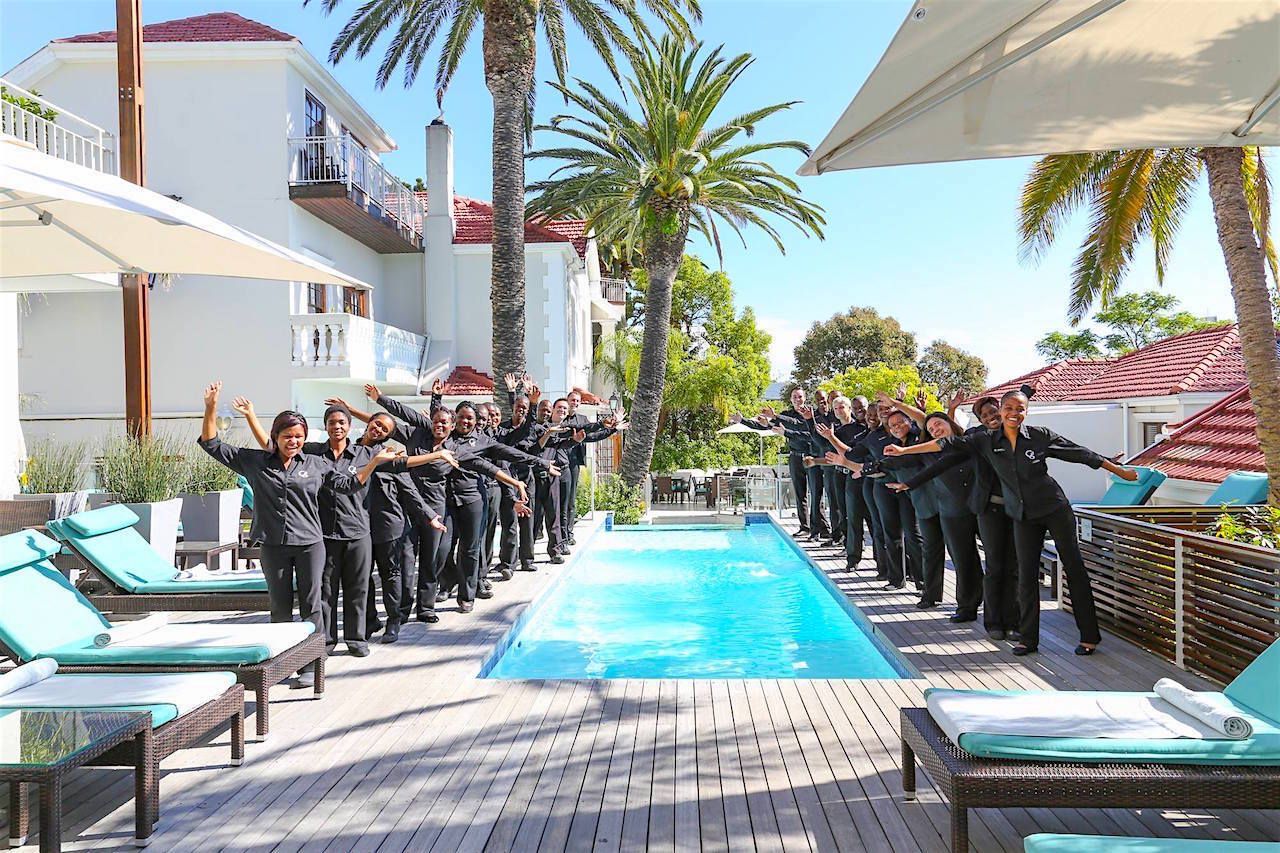 Open to everyone but very LGBTQ-friendly, the Glen Boutique Hotel and Spa is conveniently situated in Sea Point (near Clifton and Sandy Bay) with ocean and mountain views. The Glen offers a wide range of luxury rooms, styled to your taste, as well as an outdoor pool, spa, restaurant, and sauna. They also offer yoga classes, access to a gym, and tours can be arranged.

Where: 3 The Glen, Sea Point