River cruises typically bring to mind leisurely journeys past Budapest or Vienna, with silver-haired clientele and a bedtime before the sun sets. While those European river cruises have been getting a bit of an upgrade in the last few years, they’re still nothing compared to what’s available on the other side of the world in the Amazon jungle, where river cruises are still an actual adventure.

Now, that’s not to say you’ll be embarking on a Heart of Darkness quest into the sweltering unknown, at least if you’re boarding the luxurious Delfin III in Peru. There’s air conditioning, for one, and comfortable beds with floor-to-ceiling views of the river, gourmet food, free-flowing beer, and even a gym. Plus, little looks into life on the Amazon and an expert education in its flora and fauna.

Roughing it this is not, but the five day trip on the Delfin III is a stress-free, memorable way to see the world’s most infamous jungle — with endless pisco sours and the right balance of luxury and adventure.

It’s one of the only ways to experience the Amazon in the lap of luxury. 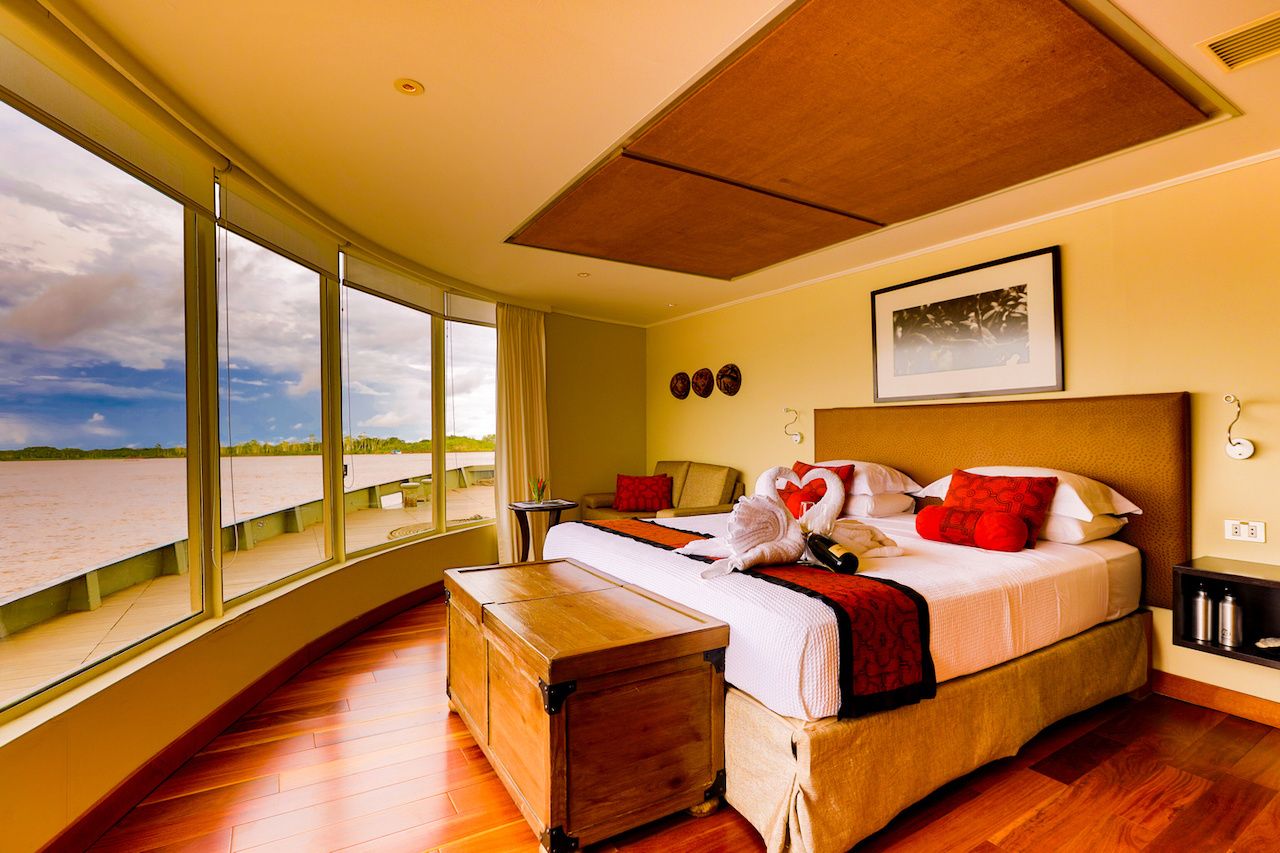 But after driving 100 minutes from the Iquitos airport, dodging tuk-tuks and mule-drawn wagons, arriving at the Delfin reception area in Nauta feels like an instant relief from its stress. Delfin is part of the Relais and Châteaux collection, one of only a handful of boats in the esteemed luxury brand and the only one operating on the Amazon. 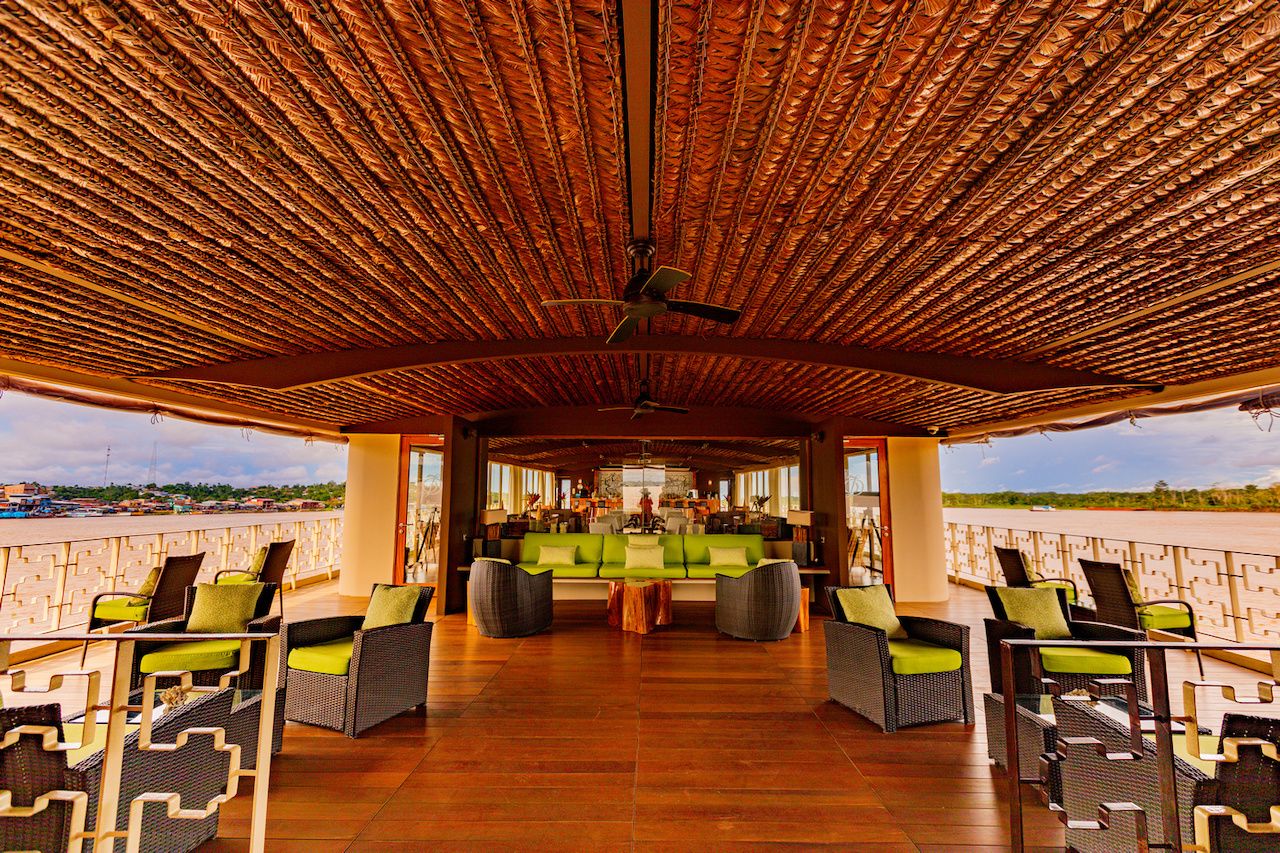 It’s the kind of place that greets you with mint-scented towels and cold fruity cocktails, where everyone on the ship knows your name by the first day, and your waiters know your drink order before you sit down. Delfin’s ships have no more than 22 suites (Delfin III is the largest), so the groups are always small and the itineraries flexible. Not to say visiting the Amazon in other fashions isn’t worthwhile, too, but if you’re not into filtering your own water and sleeping under mosquito netting, this cruise may be for you.

The water is the best place to see the wildlife. 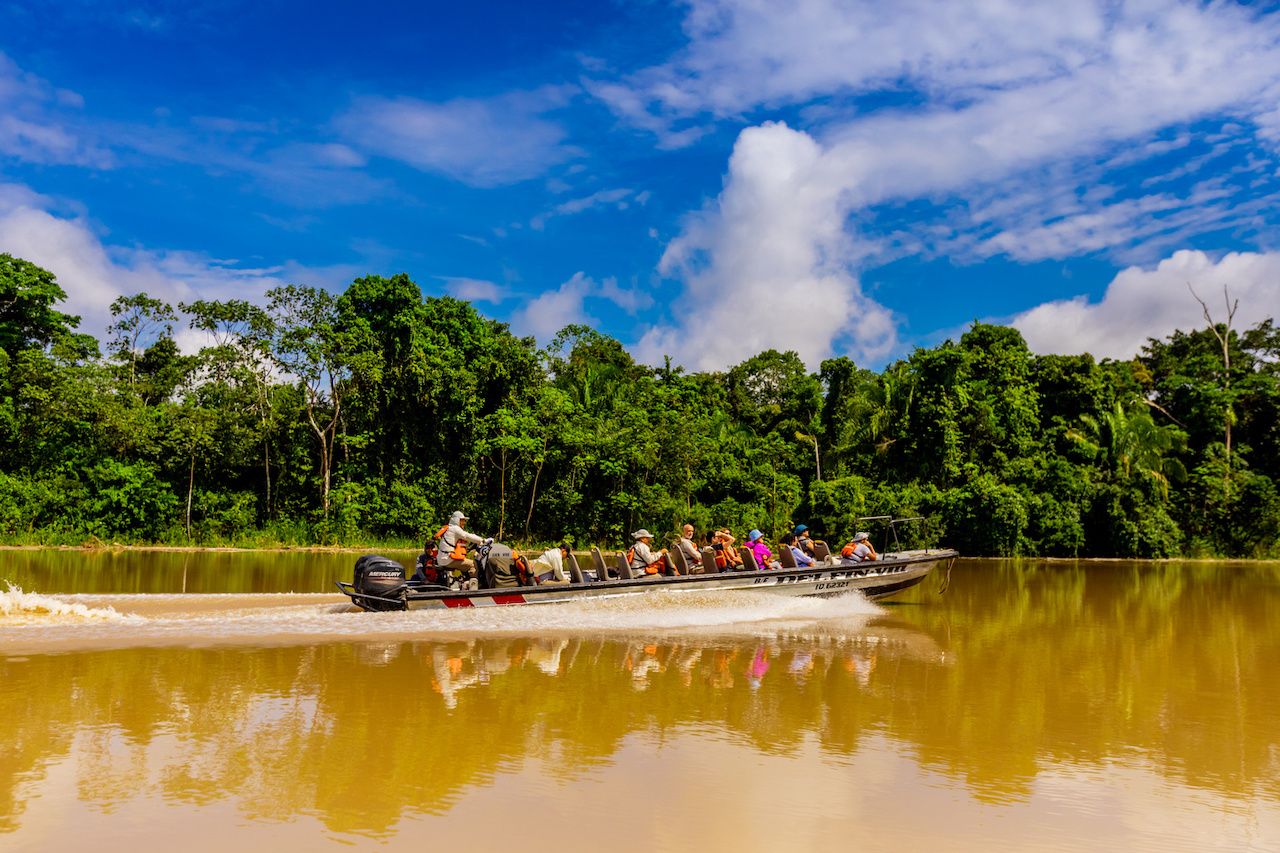 You can hike through the Amazon, in many places, with many tour companies. But the region is based around a river that fluctuates up to 30 feet a year, meaning most of the wildlife around the river is either in trees or in the water.

That means the skiff rides — which are the bulk of your itinerary aboard any of Delfin’s ships – are the closest you’ll get to most of the wildlife you came to see. That includes the aforementioned early-morning bird-watching rides. But also rides at sunset where you can fish for wild piranha or late-night rides scoping for the bright eyes of caiman crocodiles floating in the water.

You’ll also spot monkeys and sloths in the treetops both from the skiffs, the sunny pool deck, and often through the windows of your room. You’ll also find yourself spotting so many dolphins — both grey and pink — by the third day that you don’t even stop to look. Though they’re harder to spot in the brown water, the animals are still plentiful. Just don’t get excited and try to swim in after them.

Serious wildlife experts explain it all. 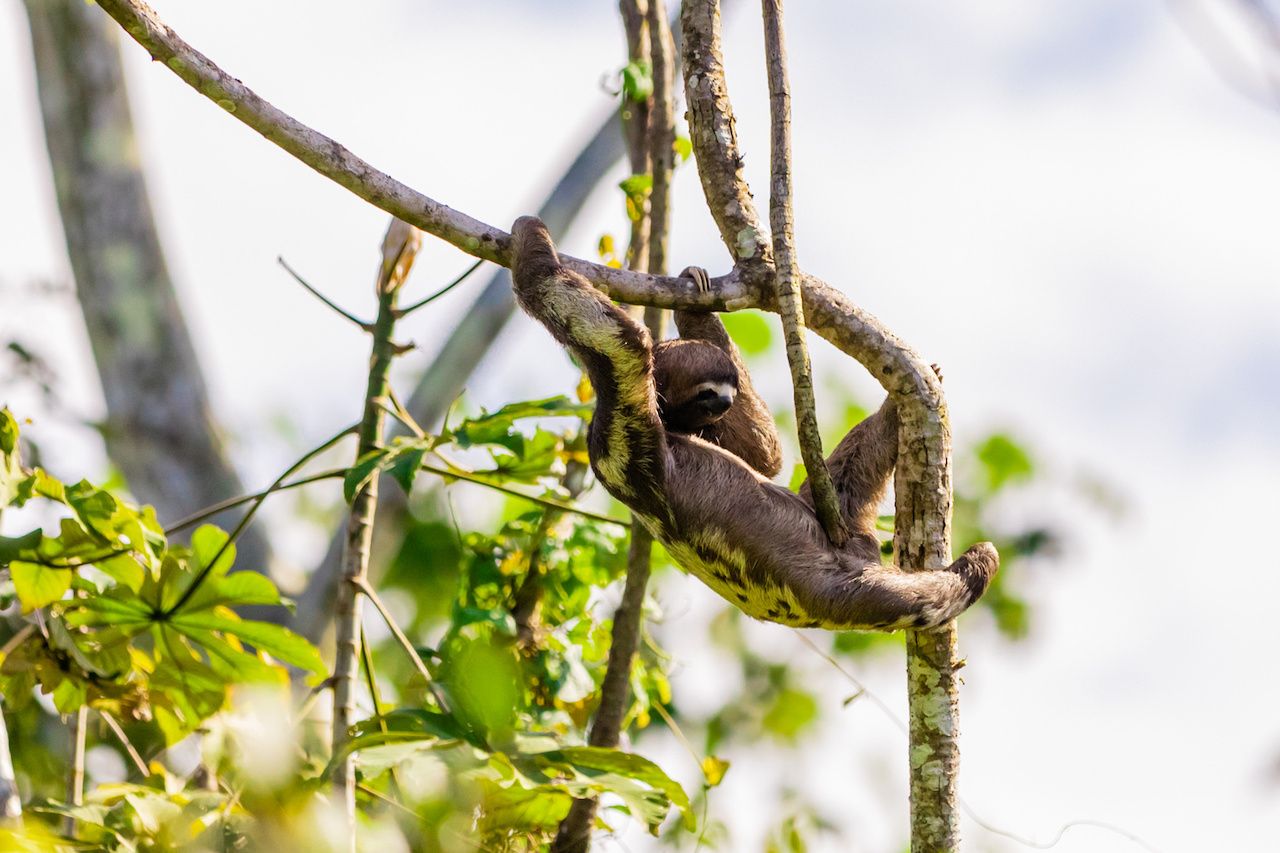 The team of experts aboard the ship is an endless fountain of knowledge, and they’ll happily explain everything from the cacophony of animal noises to the cargo aboard the ships floating down the river. They’ll take you down some of the hundreds of tributaries, stopping for picnic lunches in aquatic fields of giant lily pads and directing you to fishing holes where catfish and piranha bite hardest. Even when you don’t see animals, you’ll learn about what you might see, just in case a panther happens along. And they always come with a full cooler of water, beer, and Champagne.

The food is the best you’ll ever find on a ship. 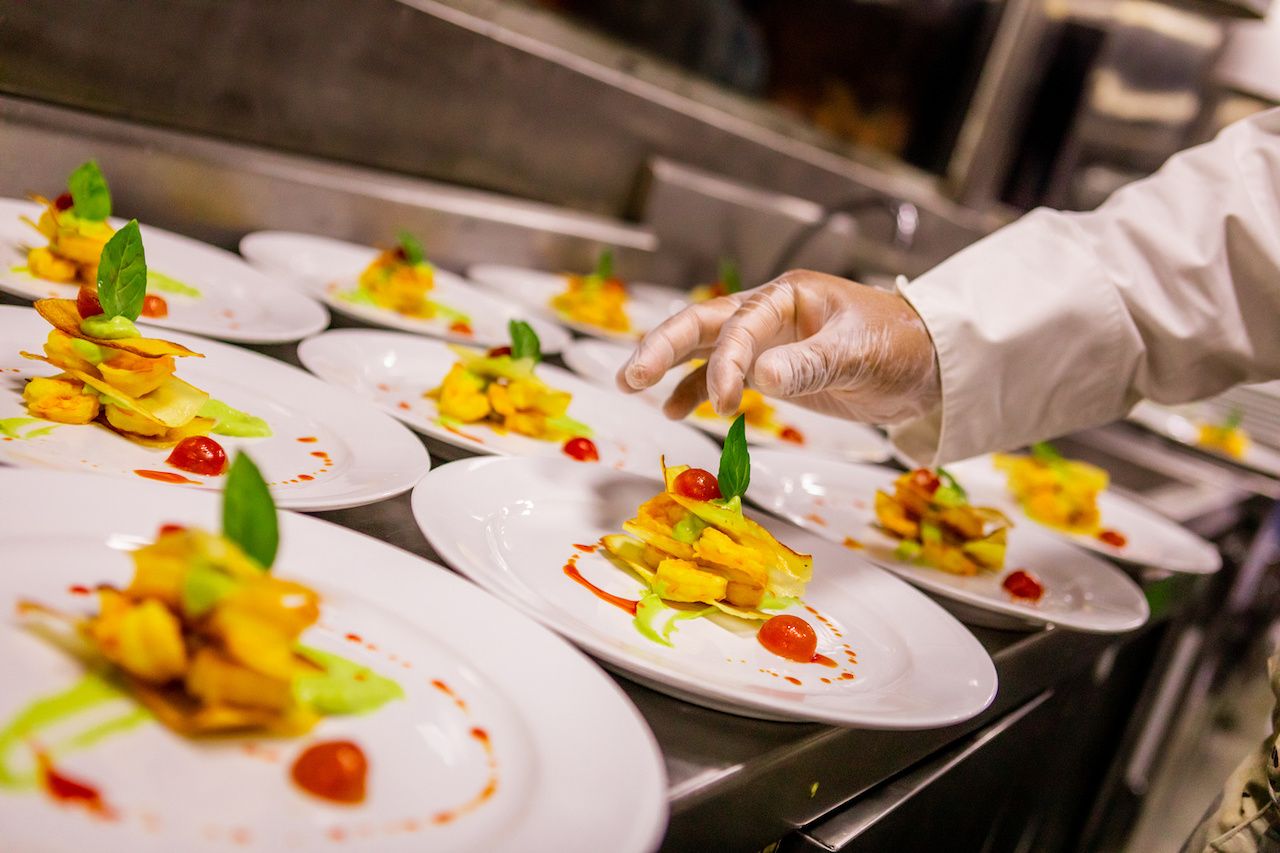 It’s no big secret that cruise ship food has gotten a serious makeover since the heyday of the midnight buffet. But the food onboard the Delfin ships ranked at the top of most restaurants I’ve tried, at sea or otherwise. Each day Peruvian chefs create three-course feasts for lunch and dinner, with fresh ceviches, pepper-crusted sirloin with sweet potato mash, grilled paiche with coconut salsa, and plenty of saltado, all plated with immaculate detail. It is almost like having the best of Lima’s culinary scene floating along with you.

Dinners are complemented with Peruvian white and red wines, as well as fresh-baked bread and desserts. Breakfasts are washed down with fresh-squeezed maracuya and camu camu juice. Those are also used in the onboard ice creams. There is a small gym on board if you want to keep up with your home routine, but feel free to just cut yourself some slack and dig into the delicious Peruvian food with abandon.

The ship is a welcoming beacon after a long day in the jungle. 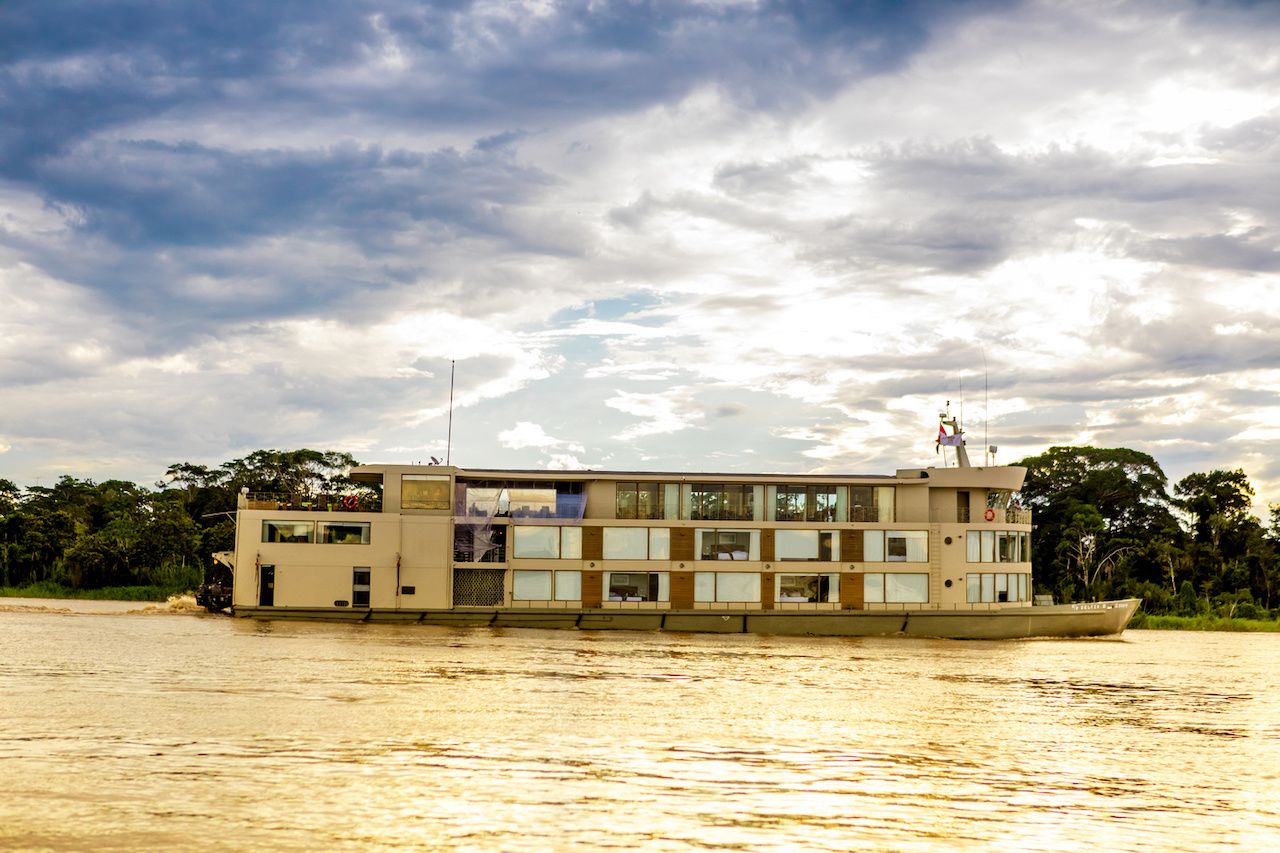 No part of a Delfin cruise is going to test your tolerance of the elements; this is a trip for the kind of people who don’t necessarily want their limits tested on vacation and are willing to pay for it. But the Amazon is still the Amazon, and your Champagne-filled evening kayak trip can turn to a blinding paddle through a thunderstorm without warning. It’s still one of the wildest places in the world, and having a soothing place to return makes a monstrous difference.

So at the end of one of your many adventures, when you turn a corner and see the bright lights and big windows of the Delfin III sitting in a hidden corner of the river, it’s like seeing your parents house after a long, wet walk home from school. Everything about it is inviting, from the muted colors of the interior to the memory foam beds and the plush bar where your beers and pisco sours are all on the house. Though the trip won’t make you tough, the days can still be trying. And the welcoming faces and soft touches of the ship make it feel like home, if only for a few short days.

You’ll get to take a peek into life on the river. 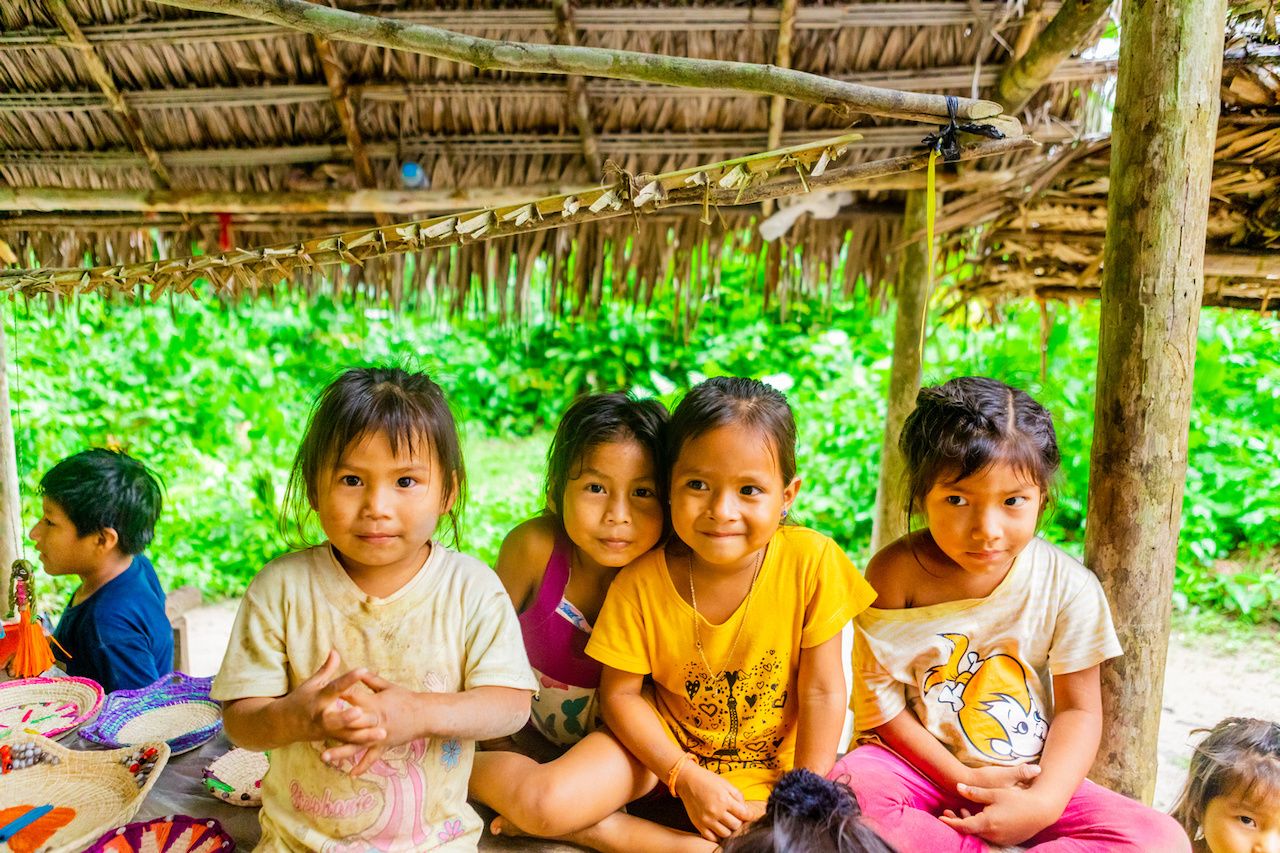 Though luxurious, Delfin’s cruises aren’t floating all-inclusives that aim to insulate you from the land you’re traversing. Part of the experience is visiting one of the remote villages along the river to connect with the the local people and learn what life is like this far from cell service. (The ship doesn’t have WiFi and service is almost non-existent, so be prepared to totally unplug.) The ship visits five to seven different villages per season, where passengers can tour open-air homes on stilts and buy crafts made by the villagers. 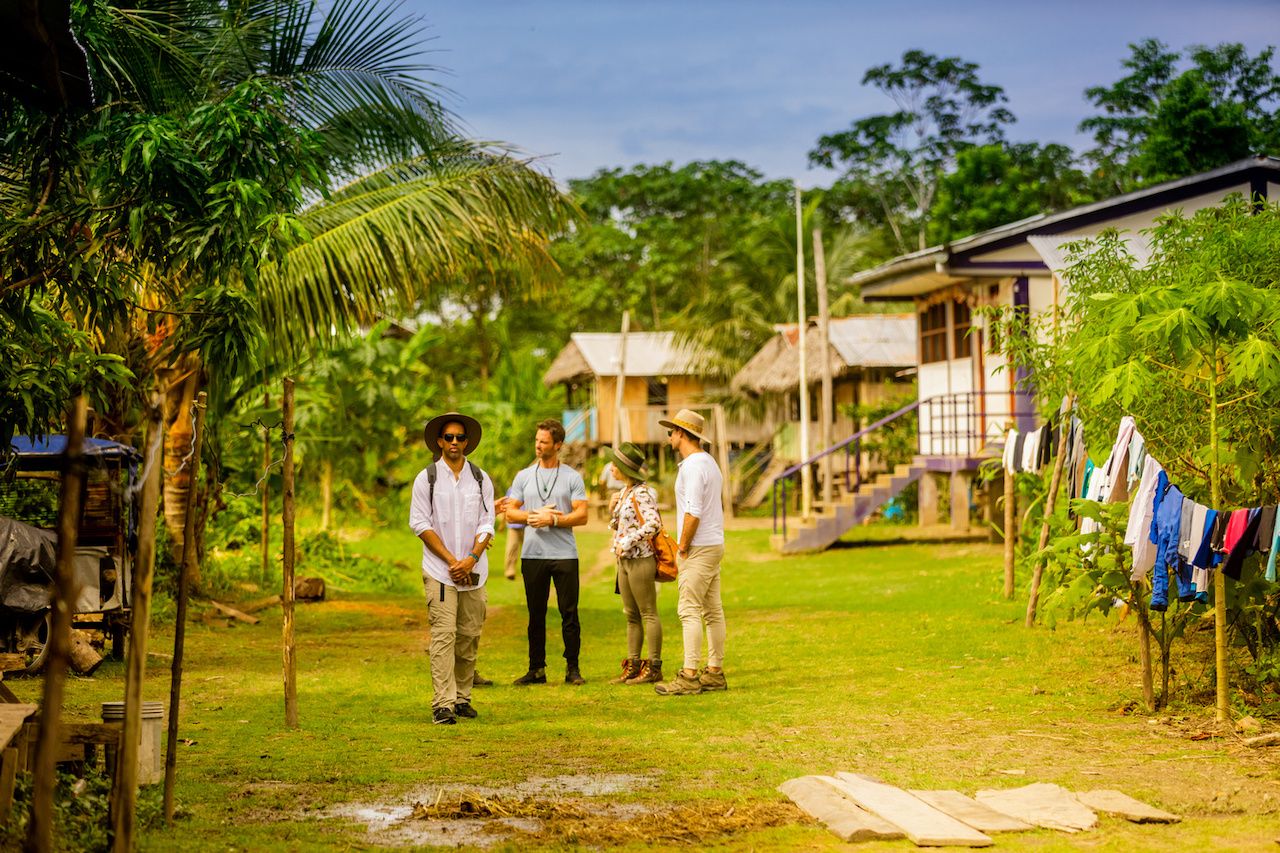 Our group stopped in a small village near Sequenta, where we delivered school supplies and notebooks to some of the local children. They sang a well-rehearsed rendition of “Como esta mis amigos,” before telling us — via one of our guides — a little about their lives. A full-on cultural immersion it was not, but between interacting with the kids, touring their open-air homes, and buying souvenirs in the craft market, it made the trip feel less exploitative than many luxury cruises around the world can so often be — especially in a region whose resources are constantly under threat.

How else are you gonna avoid bugs? 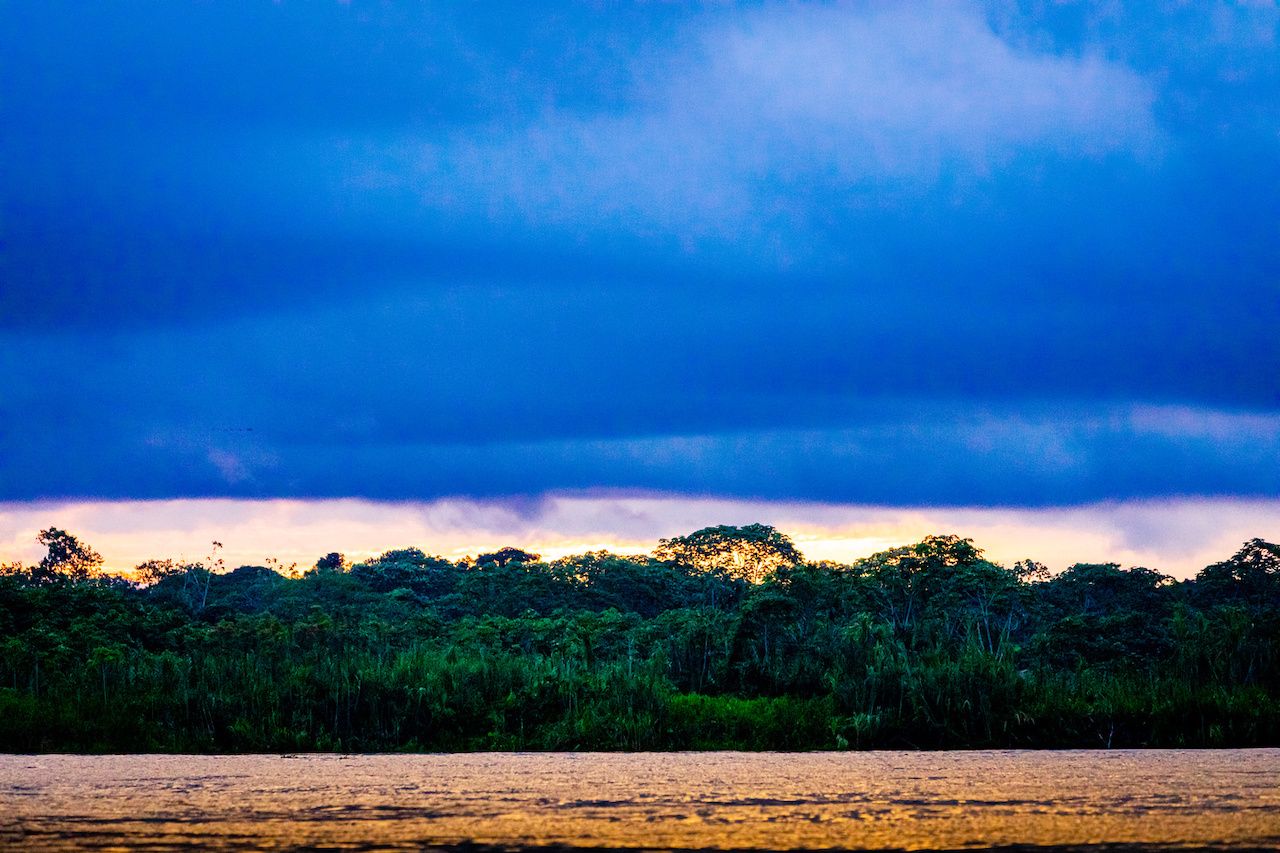 After the cruise, our group spent the night at the Lakshmi Lodge, a land lodge on a hill overlooking the Amazon with spacious cabins topped with palm-frond roofs. Though the places had fantastic food, sweeping views, and comfortable accommodations, it simply had no escape from the onslaught of insects that call the Amazon home. But it’s the jungle — complaining about bugs here is kinda like complaining about bad drivers in Florida.

That said, when you’re on a moving ship in flowing water, your exposure to insects is minimized. Especially when you have a spacious suite from which to enjoy the scenery with no exposure to the outside. So if this part of the world has been on your list for a while, but the threat of bugs intimidates you, Delfin makes the whole experience a lot more comfortable — and may be worth the $3,200-4,500 price tag.

CruisesSmall-Ship Cruising Is the Best Way To Explore Thailand’s Southern Islands
Tagged
Cruises Lux Travel Peru
What did you think of this story?
Meh
Good
Awesome

Why You Should Go on a River Cruise, Even if You're Not a Cruise Person