The Mai Tai is the quintessential beach drink of the Hawaiian islands. Sipping one while kicked back on a beach lounger is part of the vacation experience — especially if it comes garnished with a bright pink cocktail umbrella. The taste has something to do with how it became the drink of paradise, but it’s more than that. In Hawaii, the Mai Tai — a rum-based cocktail traditionally made with orgeat, lime juice, orange curaçao, and demerara simple syrup — is woven into the fabric of modern history.

There’s some debate over who invented the original Mai Tai. By most accounts, it was bartender Victor Bergeron, also known as Trader Vic. He, along with Donn Beach, are credited with kickstarting the tiki bar and restaurant craze in the 1940s. According to legend, Bergeron created the drink in 1944 with J. Wray and Nephew’s 17-year-old Jamaican rum at his Trader Vic’s restaurant in Oakland, California. He named it after the Tahitian phrase maita’i roa a’e, or, “out of this world.” Beach, it should be noted, claims Bergeron was inspired by a punch from his Don the Beachcomber restaurant, though Bergeron writes in his bartender’s guide book that “anyone who says I didn’t create this drink is a dirty stinker.”

As Bergeron helped create a thirst for pan-Polynesian and Caribbean themed restaurants through his Trader Vic franchise, the Mai Tai’s popularity spread. The drink morphed into its modern iteration when Bergeron brought the cocktail to the shores of Honolulu in 1953. That year, Bergeron was commissioned by Matson Navigation Company to make a signature cocktail for its luxury hotel, the Royal Hawaiian, in Waikiki. In a twist on his standard Mai Tai, Bergeron took one of Hawaii’s most popular produce exports, pineapple, and added a splash of the fruit’s juice to the drink. It’s a citrus boost that dramatically altered the Mai Tai, and it’s still the way many people prefer to order the cocktail to this day.

Bergeron’s reinterpretation lives on at the legendary Mai Tai Bar at the Royal Hawaiian, but it’s not the only hotel bar where the drink has a long history or takes center stage.

Whether you’re looking to have a Sunday Funday or simply want to sit by the pool and chill with a frosted beverage, there are a handful of bars on Oahu to sip on several Mai Tais as part of a tiki-themed tour. 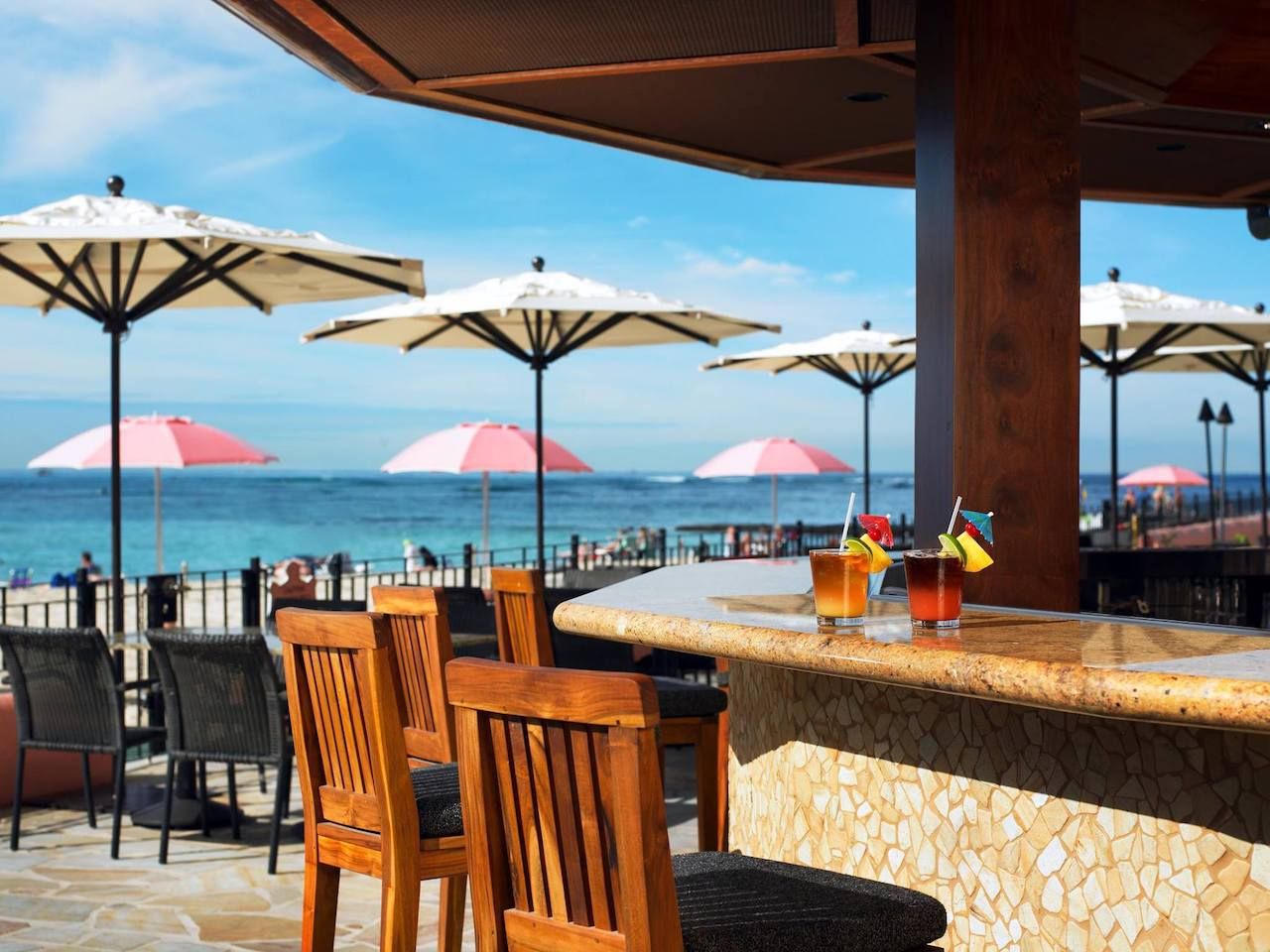 This beachfront bar is where the Mai Tai was first served in Hawaii, and much of the pink-themed decor, including beach umbrellas, chairs, and the drink menu, exists as it did more than half a century ago. The classic Mai Tai created by Bergeron comes loaded with a playful garnish: a combination of a lime and pineapple wedge, plus a maraschino cherry. It’s an often Instagrammed cocktail, but the most essential Mai Tai on the menu is actually Vic’s original recipe that dates back to 1944. That drink, called the Vic ‘44, substitutes in lime juice and mixes in Pyrat XO Reserve Rum, an aromatic Caribbean-style rum that’s similar in substance and quality to rums Vic used to rely on (the original J. Wray and Nephew 17-year-old one isn’t made anymore, and it’s so rare that bottles often cost thousands of dollars on the secondary market). 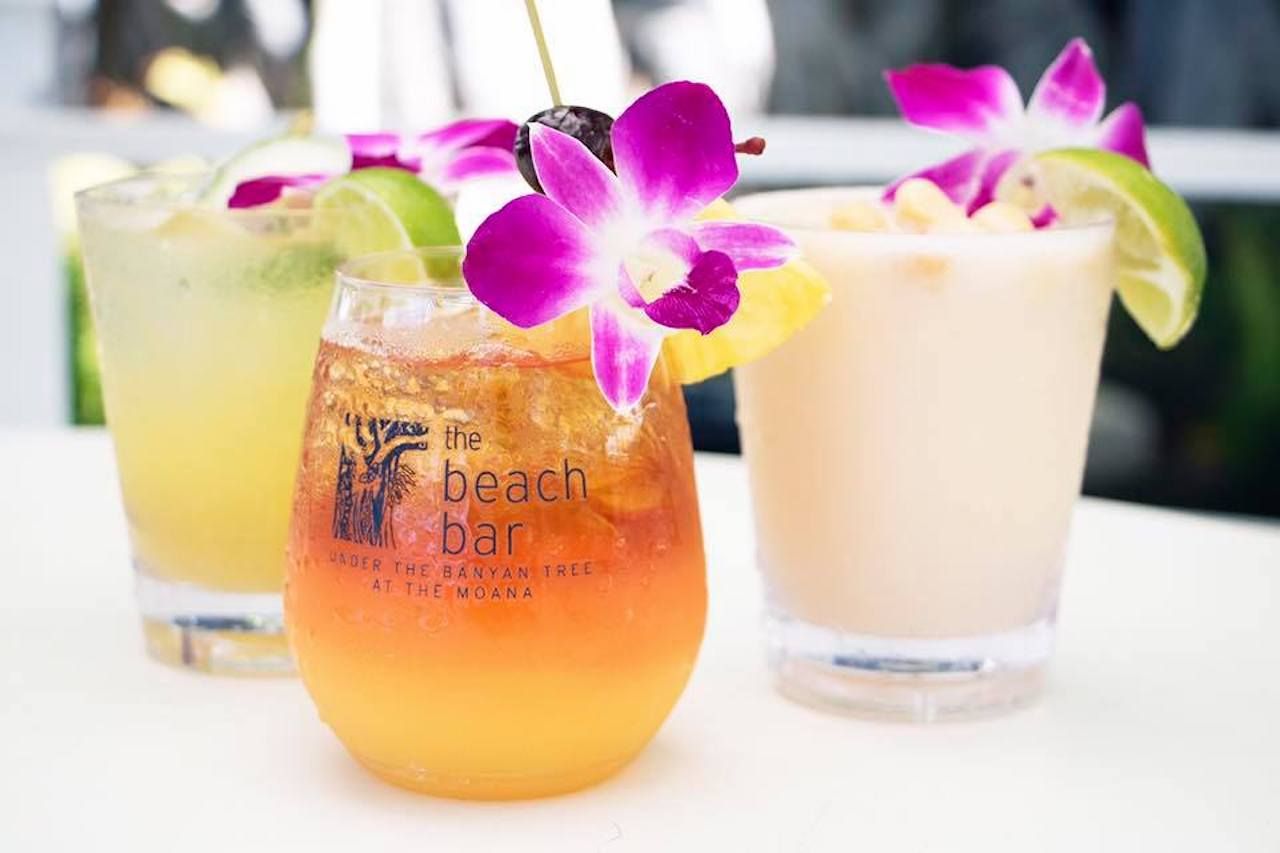 Photo: The Beach Bar at The Moana Surfrider/Facebook

Vic also created the drink menu at this beachside bar located in the courtyard of the Moana Surfrider, a hotel with an upper-crust Victorian vibe. Find a seat in the shade underneath historic banyan trees and order up a “torch lighter.” That’s the Beach Bar’s take on a Mai Tai, which is a slightly more advanced and elevated take on the one Vic first imagined. It’s loaded with fruit flavors, including banana liqueur, passionfruit, and cranberry juice crowned atop the drink along with a floater shot of Hawaii’s very own Kula Dark Rum, a craft spirit made in Maui. 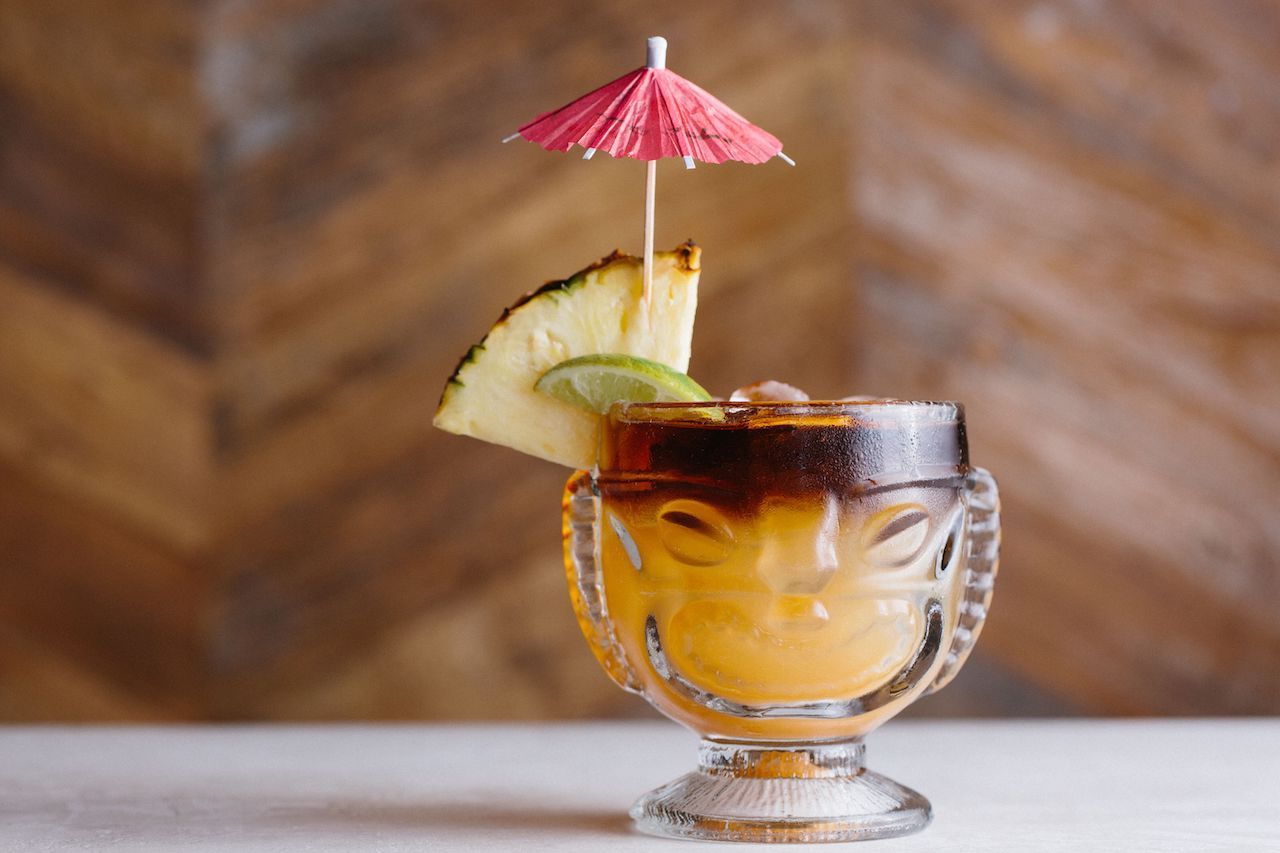 This throwback lunch and dinner spot is popular with surfers on the uber-trendy Kalakaua Avenue, and it’s a great spot to people watch — especially those who have had a few too many at the Barefoot Bar. But drinker beware: You’ll want to go easy on the Mai Tais because they pack a one-two rum punch. Duke’s classic Mai Tai calls for a blend of two high-proof Old Lahaina rums from Maui. Each cocktail is also topped off with a proprietary mix of four juices (pineapple, passion, orange, and guava) that’s bold and refreshing enough to mask the potency of what you’re drinking. 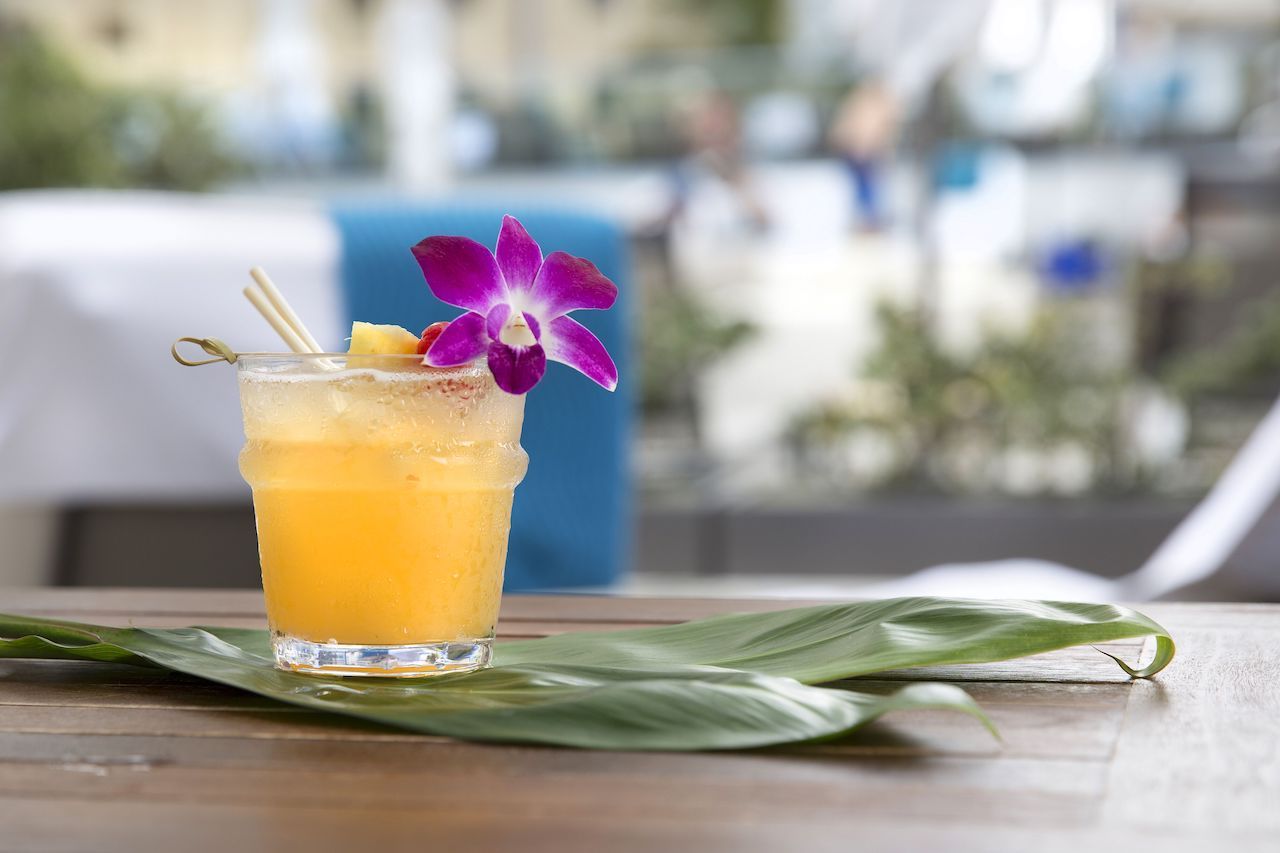 The all-new Alohilani Resort Waikiki Beach opened earlier this year and blends indoor and outdoor experiences in two classy bar options: a refined lobby bar, O Bar, situated next to a massive aquarium where schools of fish swim around you, or a raucous and fun rooftop bar, called Swell Bar, located next to an infinity pool and private cabanas that also play host to revelers who imbibe as part of an epic “Sunday Club,” aka brunch, followed by DJ sets.
The Mai Tais here reflect the A-list atmosphere of these swankier digs. For $15, you get a blend of Bacardi Gran Reserva light and dark rums, shaken with Ferrand Dry Curaçao, Disaronno amaretto, and a splash of both pineapple juice and fresh lime sour. 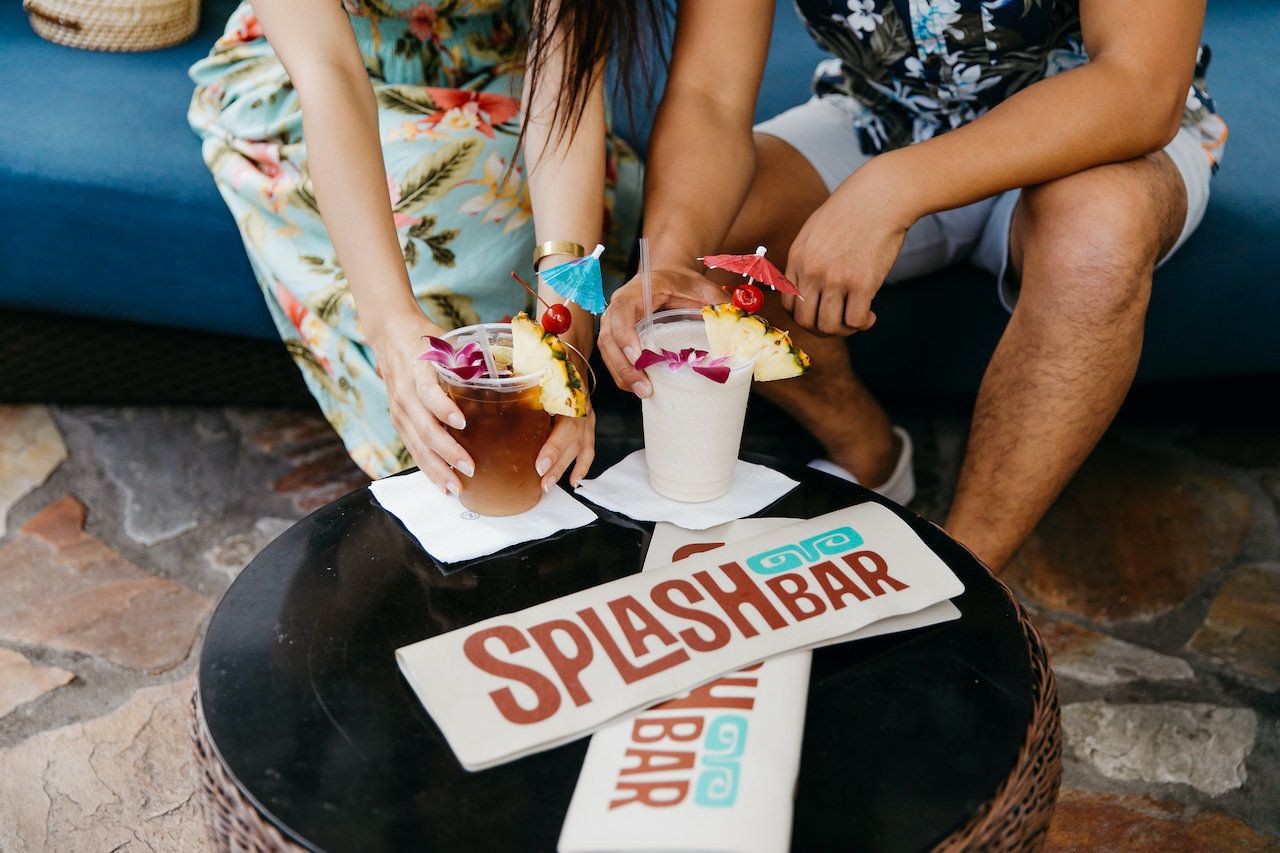 For one of the best deals on a Mai Tai, visit the legendary Sheraton Princess Kaiulani Splash Bar, an outdoor poolside bar with one of the longest-running daily happy hours in Waikiki, from 11:00 AM to 6:00 PM. The special rotates to a new tiki drink each day. On Fridays, aka Mai Tai day, the classic cocktail with a floater of dark rum goes for $9. Or sample the “Three Way Tai” platter, which is a tray of three Mai Tais served in a classic variety, mango flavor, and cachaça-spiked trio. It’s also a bargain, as the three drinks go for just $21. 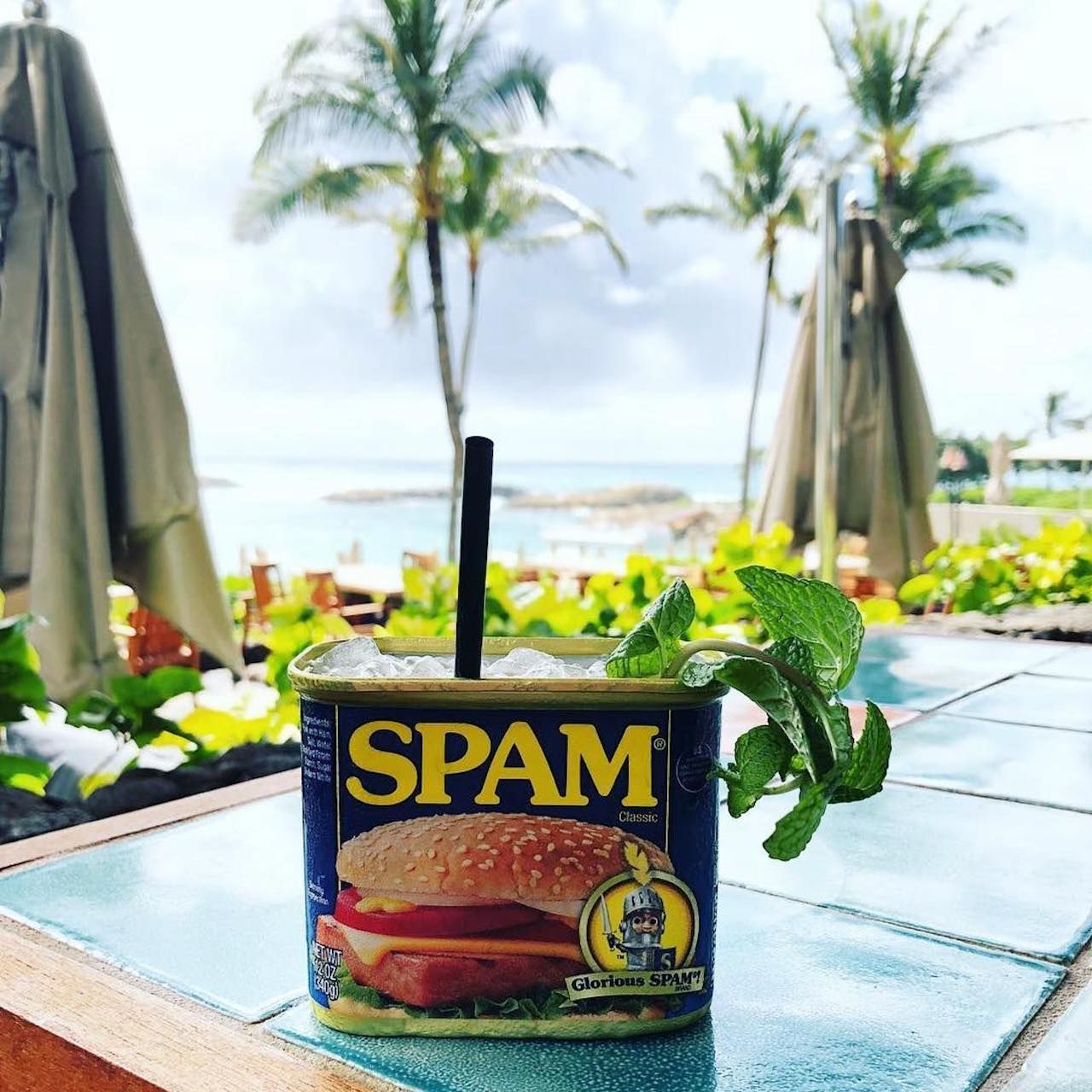 Michael Mina is a James Beard Award “Best Chef” winner, and he’s also the brains behind one of the top fish houses on the western coast of Oahu: Mina’s Fish House, located inside the Four Seasons Ko Olina resort. Ko olina means “place of joy” in Hawaiian, and fresh cuts of sashimi and raw seafood platters that range from oysters on the half-shell to crab legs certainly spark joy. Executive chef Garrick Mendoza diligently works in the kitchen with “fish sommelier” Ryan Houser, who can pair whatever your drinking with one of several catches of the day. The restaurant is a literal “line-to-table” way of eating.

But the best reason to book a reservation in advance is for drinks that come with the island’s best sunsets, which times to just after happy hour (3:00 PM to 5:00 PM). The favorite cocktail with both tourists and locals is the “If You Can, Can,” a classic take on a Mai Tai that’s garnished with fresh mint. It’s served in a tin can of Spam, which also is a nod to Hawaii’s preference for this shelf-staple pantry item.

Of course, if you’re in search of a cure-all Mai Tai fix, visit the Four Seasons pool at 2:00 PM and find bartender Zane Lawson, who goes by the name of Dr. Mai Tai. He mixes several varieties from a bicycle cart with free samples for hotel guests with a “prescription” of legal drinking age.