Though Miami is relatively new on the world’s art scene, one area where it has always excelled is architecture. With the world’s largest collection of Art Deco buildings in South Beach, and the sea of neon and low lines that fill the Miami Modern District, the city has always showcased some of the most visually alluring architecture in America.

You’ll find no shortage of Miami architecture tours that will guide you through some of the more notable designs. But to discover some of the less-obvious spots, we turned to a couple of South Florida architecture heavyweights. They hipped us to some architectural oddities around the Magic City you might otherwise miss, and can easily see.

These are the strangest buildings you can see on a Miami architecture tour.

Though today’s Surf Club is a masterful triumph of glass and steel, the most architecturally intriguing part of the Four Seasons’ hotel is the historic bottom two floors. These were the site of the 1930s Surf Club, a private playground for rich people looking to do questionable things. The Mediterranean Revival structure came from noted Miami Beach architect Russell Pancoast, and is filled with intricate details from the ceilings to the hallways.

Pause between your fresh pasta and Branzino at the hotel’s Lido restaurant, and notice the mural standing above the pitched dining room. The Italian-inspired fresco was hidden behind dropped ceiling panels for half a century, and was once a symbol of the Mediterranean frivolity the club invited. Also take time to notice the decorative finishes in places like the ladies lounge and the bathroom corridors. Perhaps the most striking remnant of the Surf Club’s past sits on the floor of Peacock Alley, the path from Collins Avenue to the beach. Look closely and you’ll see small, black Jewish stars embedded in the walkaway, originally placed there to discourage Jewish people from walking through.

“There’s nothing worse than walking across your religious symbol on the floor,” says Kobi Karp, whose eponymous architecture and design firm headed up the new project. “It was a symbol to keep Jews out of the Surf Club, they were not admitted. When we brought it back we thought, ‘Should we keep it or not?’ But we thought, it’s history, so keep it.”

During the 1920s, when Miami first became a haven for honeymooners and hucksters, developer Glenn Curtiss was attempting to duplicate what George Merrick had done in Coral Gables in Opa Locka. But instead of the Gables’ Mediterranean Revival style, Curtiss opted to gain inspiration from the Arabian-themed blockbuster films of the day, and designed his city in Moorish Revival. Though the great hurricane of 1926 destroyed much of the collection of over 80 buildings, you can still find a number of them left including the TRI-rail station and City Hall.

The building was modeled after the emperor’s palace in One Thousand and One Nights, with domes, buttresses, and sprawling courtyards, like in a Middle Eastern fortress. The domes aren’t visible from inside, so much of what you see at city hall is a façade. But the building still serves as the centerpiece to the largest collection of Moorish Revival buildings in America. Note that the Opa Locka City Hall is not open to the public, but we recommend you admire its unusual features from outside during the day.

3. The Alfred I. DuPont Building, Downtown

Miami has been nothing if not a city of perpetual identity crises, and it’s as evident in its architecture as anywhere. Such is the case with Downtown’s DuPont building, Miami’s first post-depression skyscraper built in 1939. While much of Miami’s architecture is awash in Tropical Modernism and Art Deco, the DuPont building is the odd edifice that emanates corporate grandeur, from its bas relief elevator doors to the immersive marble lobbies.

“This was Miami trying to build an urban downtown, like New York or Chicago,” says Jacob Lenard, former director of interior design at Arquitectonica and current design director for Aman Hotel Group. “This was the idea of what a financial institution would look like in Miami, they didn’t want to make it seem too resort-ish or Florida oriented.”

While today it’s an office building and an event space, the DuPont building was originally a bank — something you’ll notice almost immediately upon entering the north ballroom which still houses the original safe. It’s also where you’ll find the Art Deco teller windows, and intricately painted ceilings. The exterior is adorned in Art Deco features too, but they alternate with granite and limestone, combining the strength of a bank with the tropical fun of Florida. 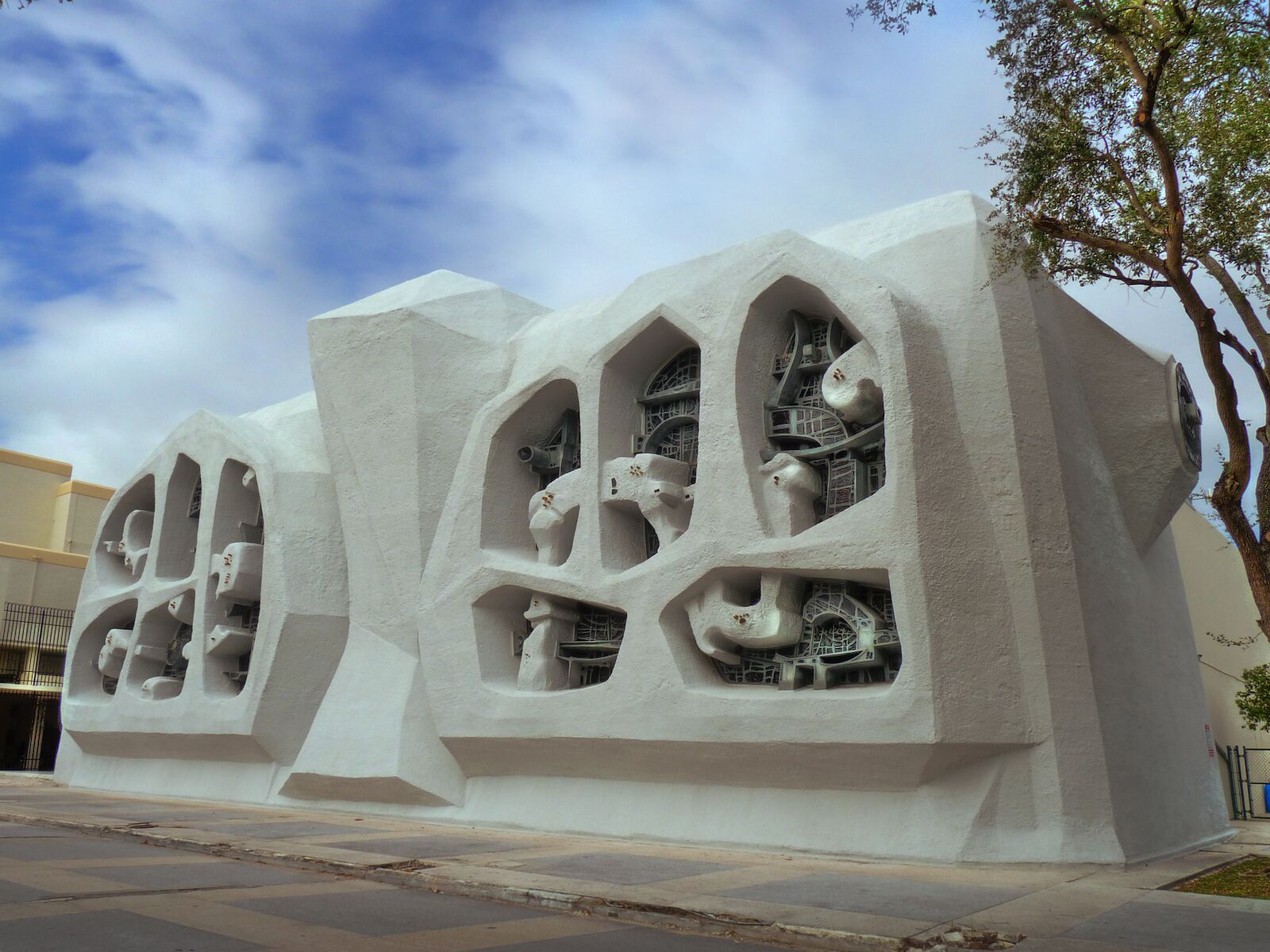 The Sophie and Nathan Gumenick Chapel at the Temple Israel synagogue in Miami. Photo: ImageMD/Shutterstock

Cathedrals are often lauded for their historic and intricate architecture. But what about synagogues? That’s the case at Temple Israel, the oldest continuously used Jewish synagogue in the state. The original structure was built in 1928 in the Moorish-Neo Gothic style, with dome shaped interior archways reminiscent of Jerusalem. It’s illuminated by copper light fixtures that are almost as intriguing to look at as the copper fixtures dotting the columns around the seating area.

The metal work is the signature of architect Kenneth Treister, who also designed the Holocaust Memorial in Miami Beach. “He brought this new wave of mixing sculpture and architecture,” says Lenard. “The metal work is very detail-oriented, and the façade is inspired by curves and has a lot of hand touch to it, it’s not trying to be perfect.”

The façade, in fact, was inspired by the Ten Commandments, and though far from symmetrical might be the building’s most unique feature. It sits outside the Sophie and Nathan Gumenick Chapel, which was added in 1969. Rather than the traditional bima-and-pews setup, this chapel is more worship in the round, where the rabbi conducts services from the center of the room. According to Temple Israel’s website, the chapel was named the 15th most notable building in Florida by the American Institute of Architects, and was the subject of a feature in House & Garden that heralded it as a symbol of the revitalization of reform Judaism.

Linda Spear, one of the founders and principal architects of celebrated Miami architecture firm Arquitectonica, designed this house in the 1970s as one of her first projects. The house gained the firm notoriety long before its Atlantis condos appeared on the intro to Miami Vice, a two-story marvel of pink set right on Biscayne Bay. Its glass brick façade hides a narrow swimming pool and courtyard, then a main level of big windows and bay views.

The whole thing is only 18 feet wide, designed especially narrow so breezes could blow through and light could permeate everywhere. “This is quintessential Miami architecture,” says Lenard. “The pink house [AKA Spear House] is a good representation of what makes Miami unique architecturally — it has connections to Biscayne Bay and to the landscape. It’s the indoor utopian idea of indoor-outdoor suburban living, and filters sunlight in really interesting ways.”

Back in the 1930s, the Plymouth Hotel was a prohibition-era den of sin, a place where ne’er-do-wells went to drink, carouse, and generally do things out of sight of puritanical eyes. “This was the cabaret district,” Karp says euphemistically. “It was where you went to get liquor, and it’s one of the only public historic buildings with an (original) mural of women showing their breasts.”

Yes, in the 1930s, showing skin in South Beach wasn’t quite as acceptable as it is today, but as the Plymouth was geared toward sexuality, its original artwork kept with the theme. As did the massive phallic tower that adorns the outside, and the inviting, oval-shaped lobby that Karp says is emblematic of female anatomy. When Karp and his team set out to restore the Plymouth and the Ansonia Hotel next door, they discovered the mural and instantly knew it told the hotel’s story.

“When you look at the cool, celebrated, cultured gay and lesbian destination that is the Plymouth Hotel [today], nobody knows that mural is so critical and important to Miami Beach history during cabaret and post prohibition days,” he says. 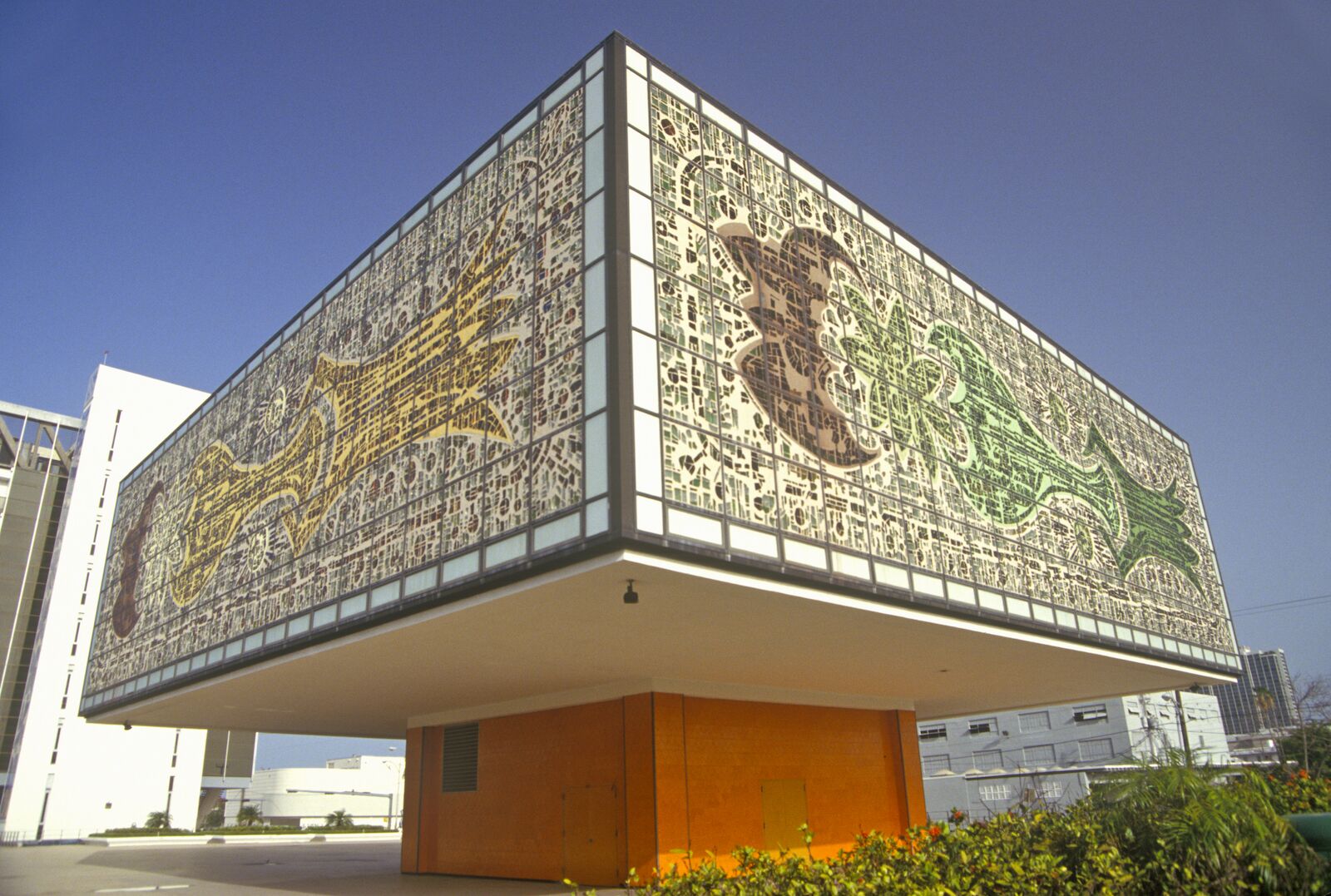 Perhaps no structure in Miami showcases the culture of early 1960s Miami quite like the Bacardi Building. The Cuban revolution had forced the rum giant out of its home in the islands, and as it set up shop in Miami the city was undergoing a wave of Tropical Modernist architecture. The two events collided to create this unusual office tower on Biscayne Boulevard, which looks to almost be floating above the ground. The cubic exterior is adorned in a ceramic mural from Brazilian artist Francisco Brennand, a work intended to reflect Miami’s international, tropical feel.

“At the time, Modernism was sweeping the nation,” says Lenard. “This is seeing how developers were adapting to Miami’s texture, color, and artisanal craft materials.”

The other half of the former Bacardi headquarters is the two-story annex, wrapped in stained glass and once home to Bacardi’s secretarial pool. The buildings are now home to the YoungArts foundation, who with the assistance of Frank Gehry is designing its new national campus.