With 3,200 miles of Great Lakes shoreline, it makes sense that Michigan has more lighthouses – 129 – than any other state in the country. Many Michigan lighthouses are open to the public, have museum exhibits, and allow a climb to the top of the tower. Some of them are still active navigational aids.

Those who want to dive deeper into the legends and lore of lighthouse living can indulge in a stay at a beacon-turned-bed and breakfast, or pay-to-play as a volunteer lightkeeper. There’s no trimming wicks or checking lights every four hours as keepers once did, but tasks like offering tours, tending the gift shop, and sweeping floors are typical. And the sights and sounds of the freshwater seas, fierce storms, glorious sunrises and sunsets, and dazzling star shows are priceless. Here are eight Michigan lighthouses you can stay at.

We hope you love the Michigan lighthouses we recommend! Just so you know, Matador may collect a small commission from the links on this page if you decide to book a stay. Listed prices are accurate as of the time of publication. 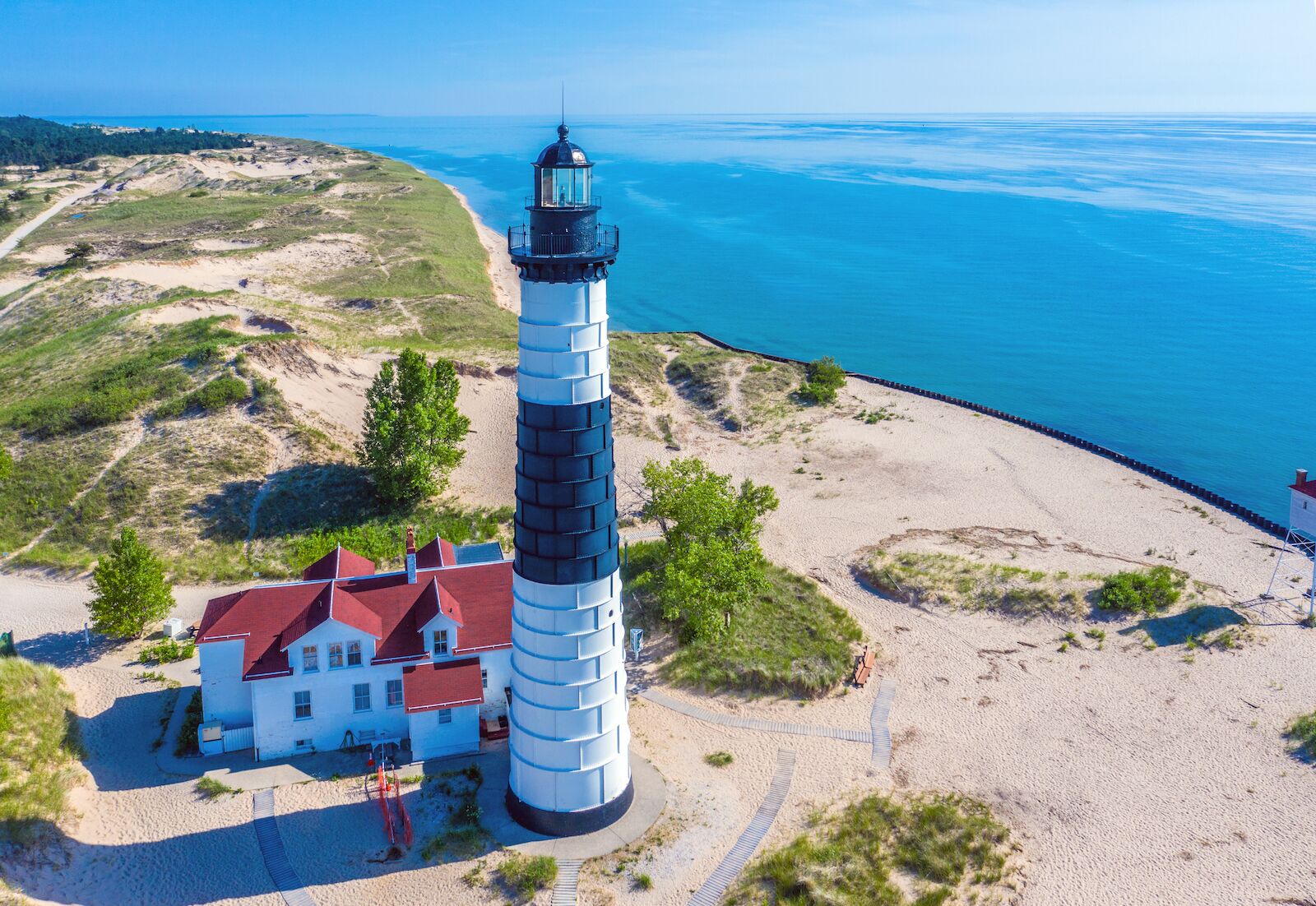 It’s an almost two-mile hike to this striking, 112-foot tower. The remoteness of Big Sable Point Lighhouse offers a hint of the isolation experienced by lightkeepers and their families. One of those keepers, the late Henry Vavrina, has made his ghostly presence known to multiple volunteers who share tales of his antics in a video on the lighthouse’s website.

Must do: Drive on mountains of sand in an off-road vehicle (yours or a rental) at the designated, 450-acre scramble area of Silver Lake dunes. Or hop on one of Mac Wood’s Dune Rides for the rare chance to roll across these natural wonders. 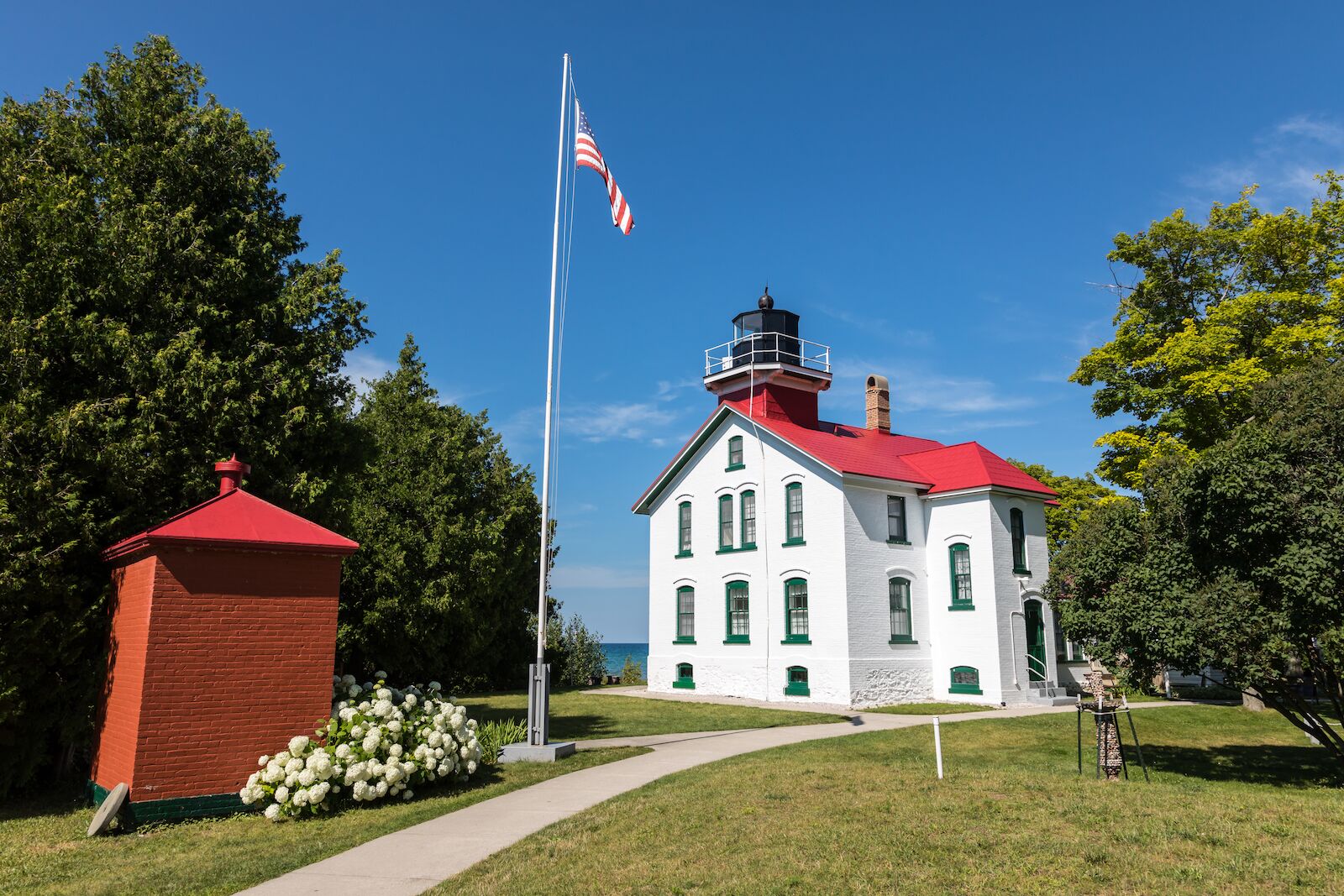 At the tip of Michigan’s Little Finger, the light atop the red-roofed, gleaming white Cream City brick structure replaced the original, 1852 light, and guided vessels traveling the tricky Manitou Passage, as well as traffic heading into Grand Traverse Bay, until 1972, when an automated beacon was installed. The lightkeeper’s home is a museum furnished as it would have been in the 1930s, and the tower is open to climb for views from 103 feet above Lake Michigan.

Up to four keepers stay in the two-bedroom, two-level apartment. They greet visitors, provide information, staff the gift shop and handle light housekeeping duties six days a week, from April through October. In the off-season (November through March), keepers at Grand Traverse Lighthouse work three days and pay $100. Additional days are available at $25 per person per day.

Must do: Sip your way through some of the 23 wineries on the Leelanau Peninsula Wine Trail. 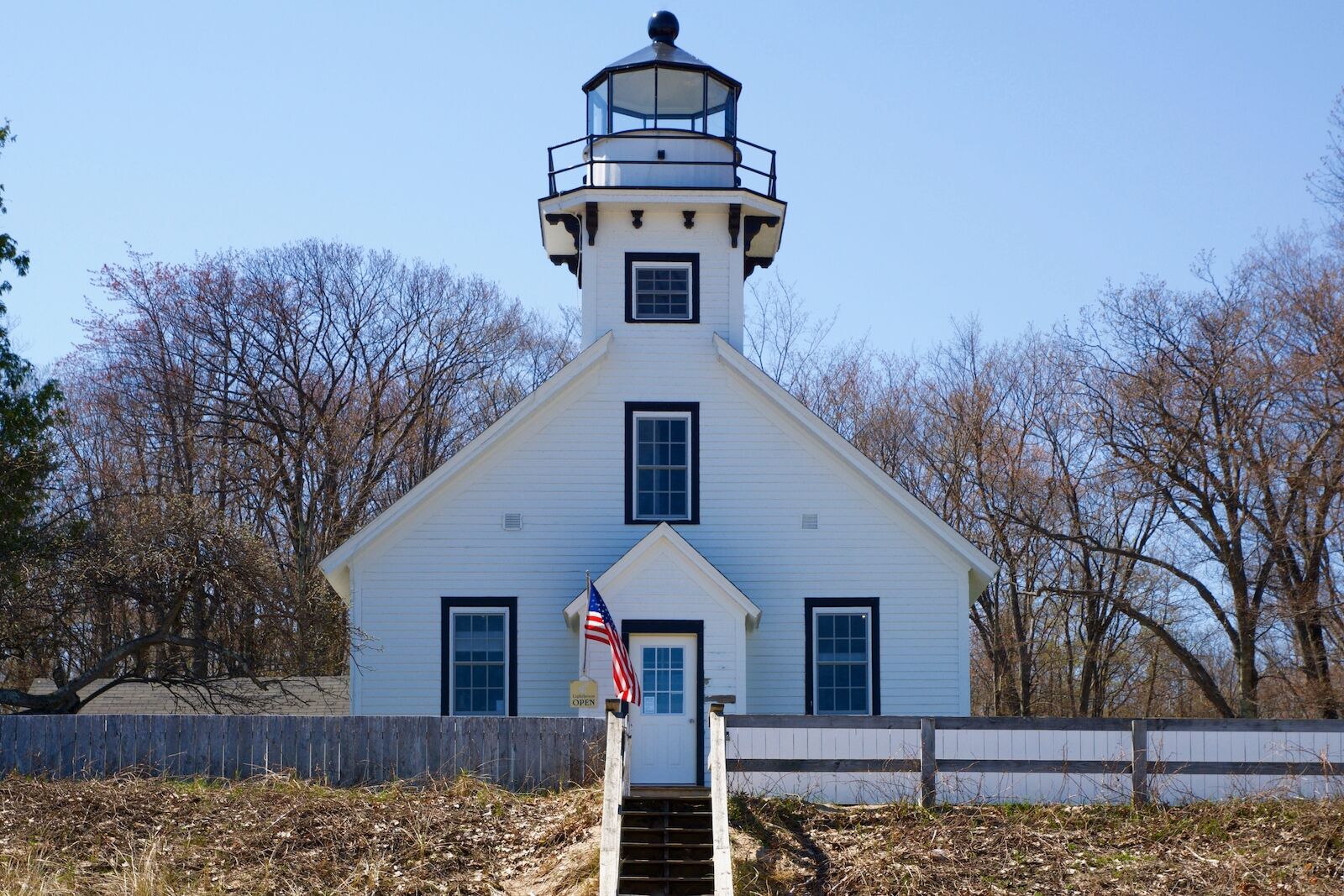 It’s a lovely, 18-mile drive past vineyards and cherry orchards to the tip of Old Mission Peninsula and Mission Point Lighthouse. Located in a county park, the white, wooden structure is surrounded by woods, trails, and the rocky beach. Visitors to this Michigan Lighthouse museum enjoy exhibits, the 37-step tower climb, gift shop, and a peek inside the historic Hessel log house, which was moved to the site as an example of cabins built by early settlers.

A team of two volunteer keepers greets visitors, handles the gift shop, and performs light maintenance duties indoors and out, six days a week for one or two weeks, from April through November. An off-season stay of three days or more is possible from December through April at $75 per night.

Must do: Sample the fruit of the vine at the 10 wineries along the Old Mission Peninsula Wine Trail. 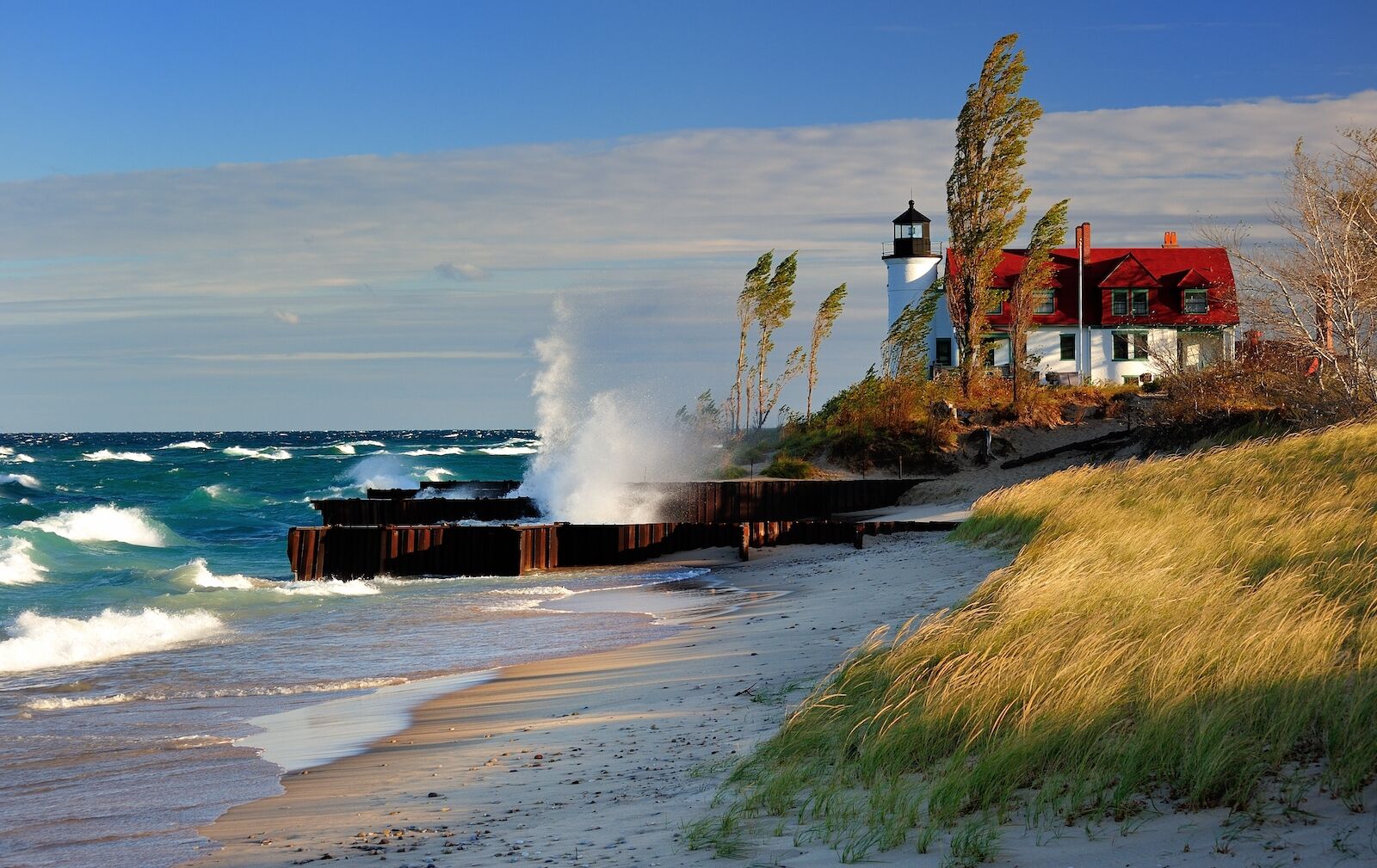 Still active as a navigational aid, the Point Betsie Lighthouse offers guided tours of the original keeper’s home, including the 34-step climb to the top of the tower. Both were built of Cream City brick, and the photogenic structure has a distinctive, red gambrel roof. The compound includes the fog signal building, Boathouse Museum, and gift shop.

The keeper’s quarters is a comfortable, freshly decorated two-bedroom, one-bath apartment with full kitchen and sitting room with sofa bed. It accommodates up to six guests for weekly rental from Mid-May through mid-October at the rate of $3,495. Shorter stays are possible in May, September and October at $550 per night.

Must do: Tackle the massive Dune Climb, hike the trails, and take in spectacular views along Pierce Stocking Scenic Drive at Sleeping Bear Dunes National Lakeshore. 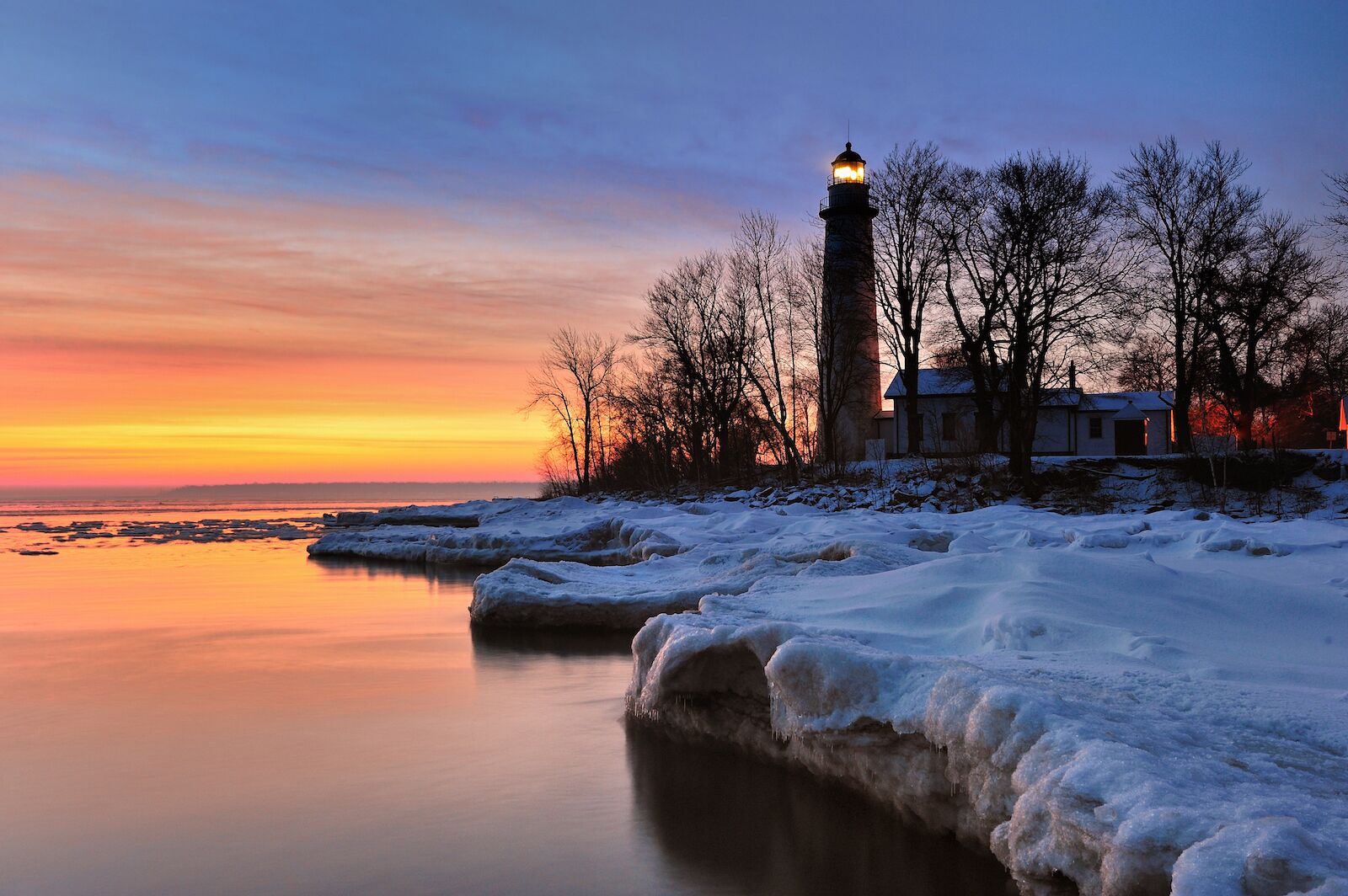 Located near the tip of mitten-shaped Michigan’s Thumb, this 89-foot tower is one of the oldest continuously active lights on the Great lakes. The original light at this site was the first in Michigan to be operated by a woman. In 1849 Catherine Shook, the widow of lightkeeper Peter, assumed his duties while raising their eight children, and may be the ghost said to visit the Pointe aux Barques Lighthouse compound. This stretch of Lake Huron is the graveyard for at least 105 vessels, and a destination for divers who explore 22 wrecks protected by the Thumb Area Bottomland Preserve.

Volunteer keepers in teams of two or four stay in the 1908 assistant keeper’s home. In addition to docent duties, keepers staff the gift shop and handle light housekeeping six days a week for a minimum of one week, from June through September.

Must do: Kayak to Turnip Rock, a limestone formation carved by the waves to resemble the root vegetable. It’s been nationally recognized as a geological wonder and is accessible only by water. 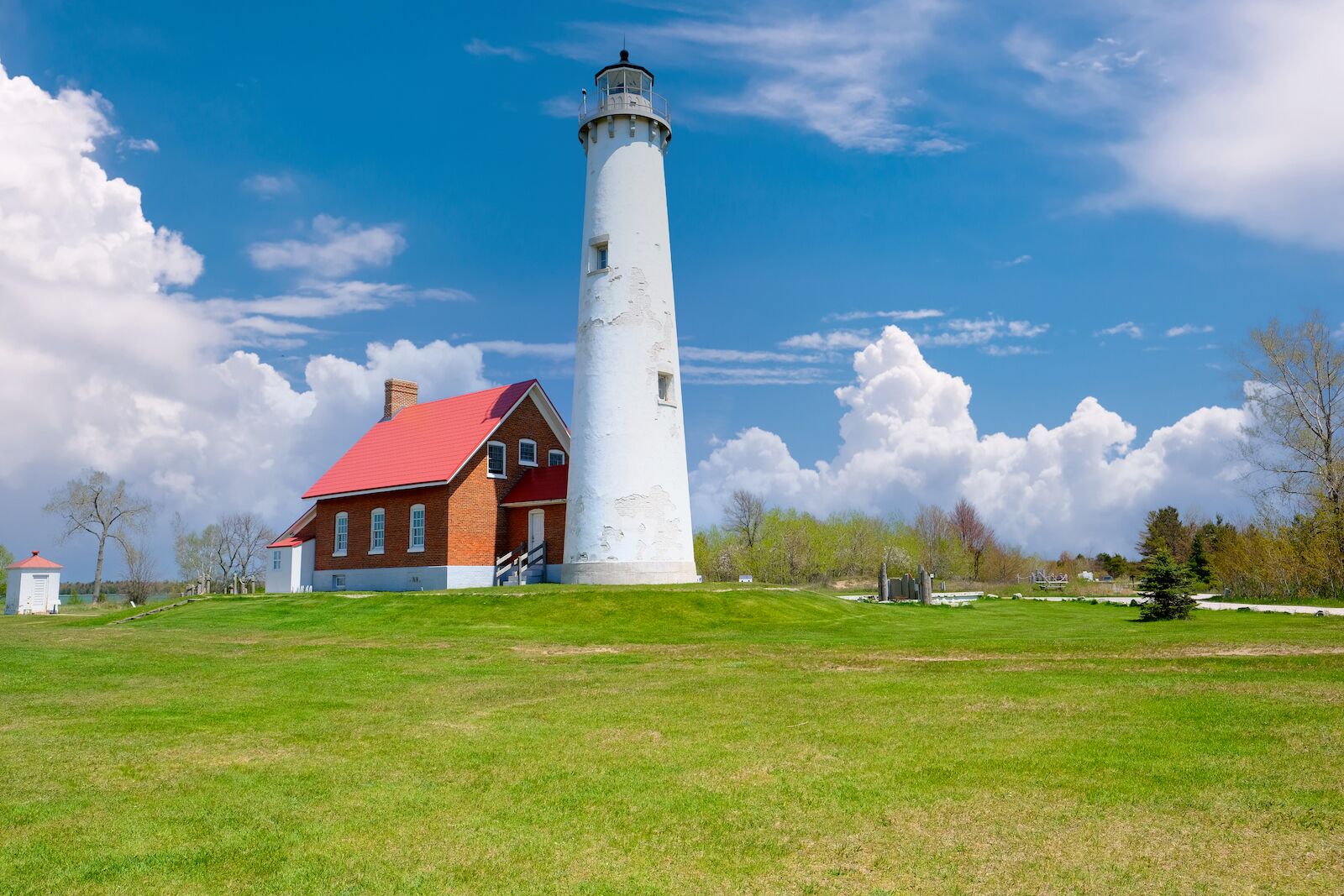 Why is this Michigan lighthouse surrounded not by water but by grass, a mile and a half from the Great Lake traffic it was built to guide? When constructed in 1876, Tawas Point Lighthouse stood at the end of Tawas Point, but over the decades Lake Huron moved enough sand to create a new spit, rendering the lighthouse too far from shore to be of navigational use; an automated light now marks the entrance to Tawas Bay. It’s 85 steps to the top of the tower and the views of the area called the “Cape Cod of the Midwest.”

Teams of four volunteer keepers are housed in the Victorian-era dwelling and offer tours and handle light housekeeping duties six days a week for a minimum of two weeks, from mid-May through mid-October.

Must do: Drive the River Road Scenic Byway to take in the views and learn about the area’s logging history. 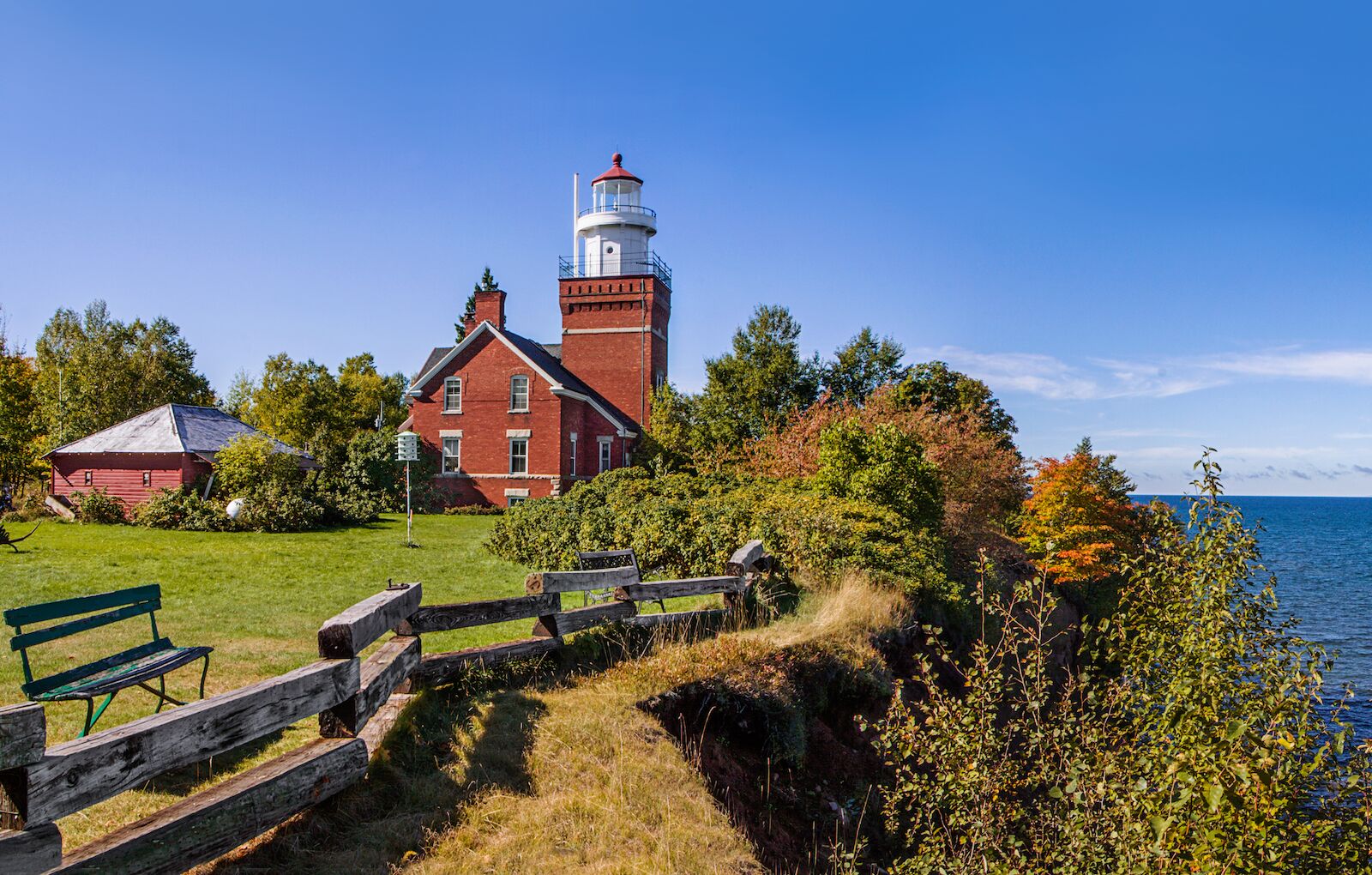 Still an active navigational aid, Big Bay Point Lighthouse is located 25 miles north of Marquette, the largest city in the Upper Peninsula. Surrounded by 40 acres of woods and perched high above Lake Superior, the inn welcomes adult guests from May to mid-November to its seven richly decorated rooms, some with fireplaces. All have private baths, and guests may climb the tower for expansive views 120 feet above the water.

Must do: Hang out at the scene of the crime in Big Bay, where a shooting at the Lumberjack Tavern inspired the 1959 movie <em starring James Stewart and Lee Remick. 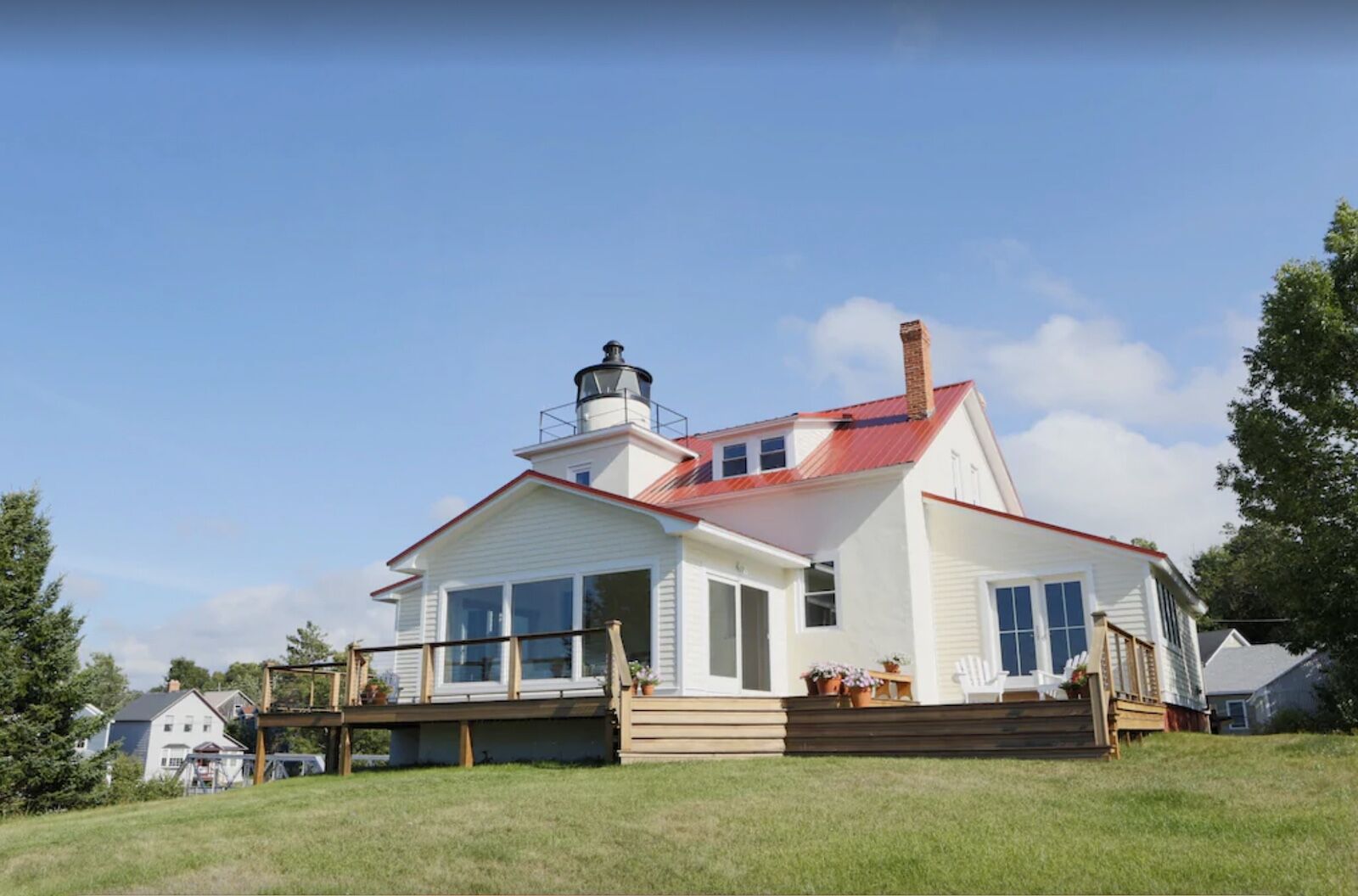 In the mid-1800s, Eagle River was a boom town thanks to the copper discovered at nearby Cliff Mine. The busy new port necessitated construction of a lighthouse, which operated from 1858 until it was decommissioned in 1908.

The historic structure has been transformed into a bright and breezy, 3,000-square foot, year-round Vrbo rental. Contemporary, with the warmth of wood throughout, the home offers three bedrooms for up to six guests, a complete kitchen, and spacious gathering spaces including a large deck. The light tower is not accessible to guests.

Must do: Explore the mining history of Copper Country through the Heritage Sites of the Keweenaw National Historical Park.

Art + ArchitectureThe 9 Most Unique Lighthouses in the World
Tagged
Epic Stays Michigan, United States
What did you think of this story?
Meh
Good
Awesome