Paying more than $4 for a mango is eye-wateringly expensive for most people in the United States. But there is a variety of mango grown in Japan that cost 500 times more than that. At almost $4000 a pair, unsurprisingly, Miyazaki mangoes are some of the priciest pieces of fruit in the world.

What are Miyazaki mangoes?

Miyazaki mangoes are a special type of mangoes that are grown in the Miyazaki prefecture in the southern tip of Kyushu Island in Japan. This region of Japan is known for its fruit production, including kumquats and lychees, thanks to “warm weather, and long hours of sunlight combined with the perfect amount of rainfall,” the Official Miyazaki City travel Guide‘s website explains. 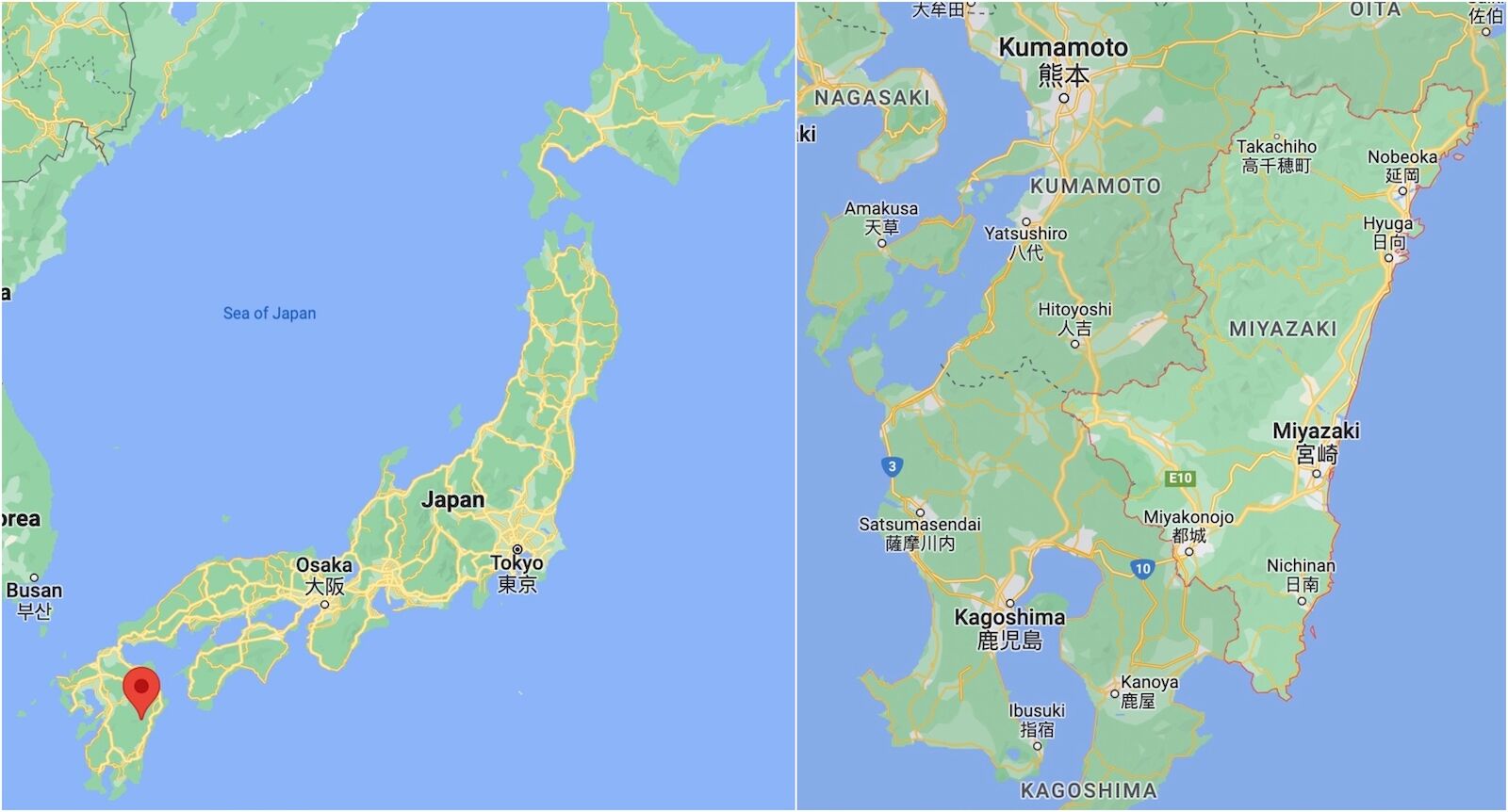 Miyazaki mangoes are from the Irwin variety of mangoes that originated in Florida in 1949 and have spread around the world. Today, they’re grown in Australia, Taiwan, and Japan, among other countries.

Unlike the varieties of mangoes consumers commonly find in US grocery stores, such as the Haden mango (large, oval-round, and red with green and yellow tones) or the Ataúlfo mango (small, kidney bean-shaped and yellow), Irwin mangoes are oval, of medium size, and turn from yellow to bright red when ripe.

What’s so special about Miyazaki mangoes?

What makes Miyazaki mangoes special is the care each fruit receives during the growing process. Grown in greenhouses, each Miyazaki mango is tended to meticulously in the hope that it will grow and ripen into a perfect piece of fruit. In the greenhouse, each fruit is securely supported by strings set high above the plants to pull it toward the ceiling so that it receives as much sunlight as possible. Each mango is also wrapped in fine plastic mesh so the plant doesn’t break under the fruit’s weight and the fruit doesn’t fall to the ground and get damaged.

In a Business Insider video, Miyazaki mango farmer Takuya Hidaka goes so far as attaching a reflective square piece of milk carton on the bottom of each mango so every single fruit has a better chance to ripen into the sought-after uniform deep red color.

For a Miyazaki mango to be considered a Taiyo no Tamago, the fruit needs to:

Once a mango has been harvested, professionally inspected, and labeled Taiyo no Tamago, it will be put up for auction at Miyazaki Central Wholesale Market. There, representatives of luxury department stores purchase them for nearly $4000. The Taiyo no Tamago will later be displayed and sold to the public in those stores.

According to several online sources, the flawless orange flesh of the Miyazaki mangoes is very juicy, very sweet, creamy, and not fibrous.

Miyazaki mangoes can be cut and peeled very easily. Each Miyazaki mango sold has reached peak maturity and detached from the tree on its own.

Where can I buy Miyazaki mangoes? 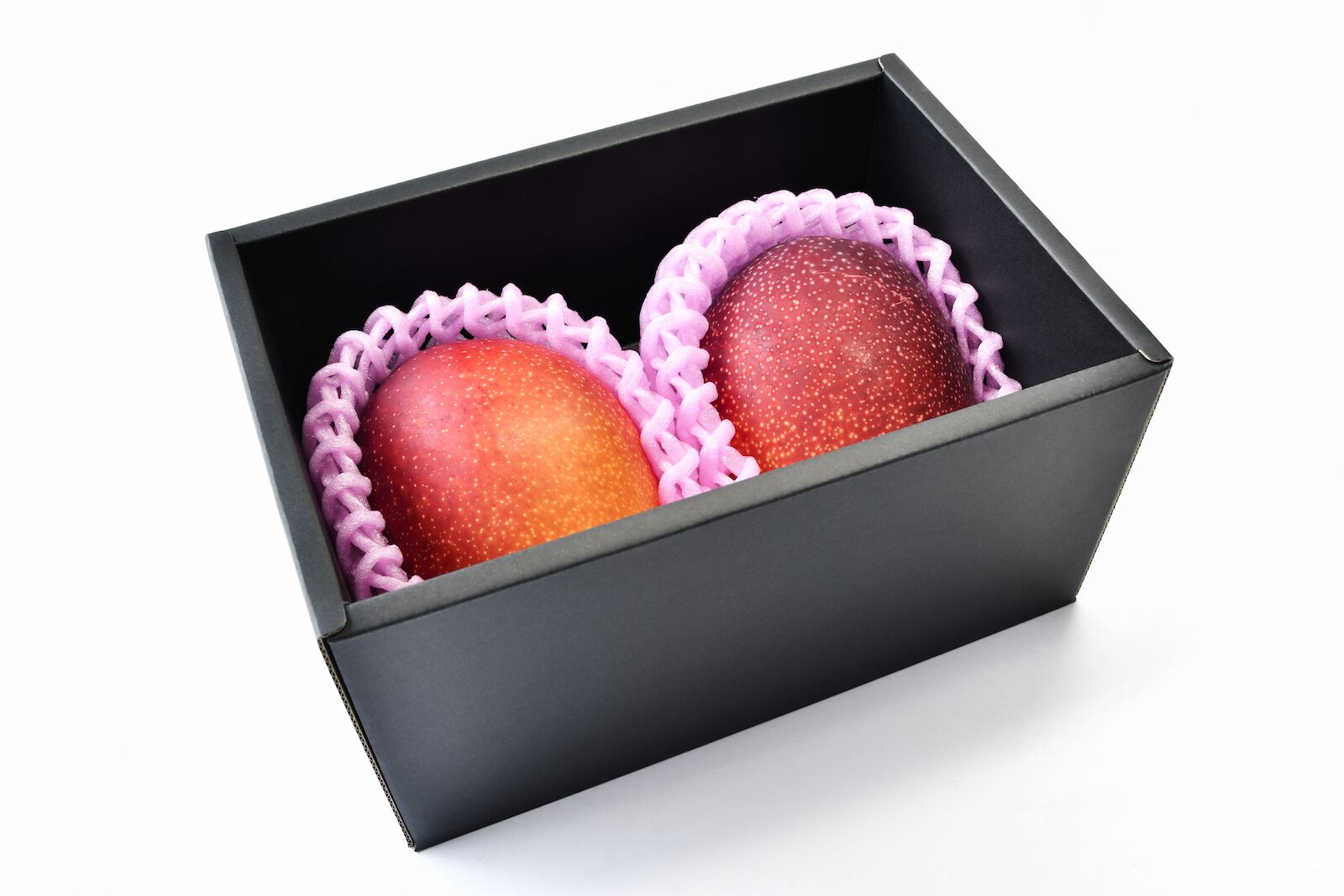 When in Japan, you can purchase and try dishes made with Miyazaki mangoes in Miyazaki city. The Official Miyazaki City travel Guide‘s website lists a few restaurants and cafés worth visiting.

The Taiyo no Tamago, the perfect specimen of Miyazaki mangoes, can be found in fancy department stores throughout Japan. Usually purchased as a gift, Miyazaki mangoes can cost up to $4000 a pair. They are usually displayed in pairs in beautiful cases and wrapped in protective styrofoam mesh cover.

Miyazaki mangoes that have not been labeled as Taiyo no Tamago can still cost up to $50 per fruit, Japanese food specialists at Bokksu report.

Miyazaki mangoes are only available between the months of April and August.

Snacks made with Miyazaki mangoes can be obtained in the US by purchasing a subscription to Bokksu, a Japanese food specialist that sends a box of Japanese snacks monthly to its subscribers.

You can try Irwin mangoes in many locations throughout the world, including in Florida where the fruit grows.

How can I grow Miyazaki mangoes?

You can buy Irwin mango trees from nurseries in the US, especially in Florida where the climate is extremely favorable to their growth. That said, Irwin mangoes are only considered to be Miyazaki mangoes if grown in the Miyazaki prefecture.

Food + DrinkThe 9 Most Fascinating Fruits in the World and Where To Try Them
Tagged
Food + Drink Japan
What did you think of this story?
Meh
Good
Awesome