The gondola in Queenstown, New Zealand, is well-known as a must-do when visiting the South Island. Yet the vast majority of the cable car’s 3.6 million annual visitors are focused on taking the perfect photo of the Remarkables mountain range. Not many thrill seekers have planned a trip up the gondola as part of their adventure holiday. Yet amongst the pine trees of Ben Lomond Reserve is arguably New Zealand’s best downhill mountain biking park — with 20 miles of trails for every type of rider. 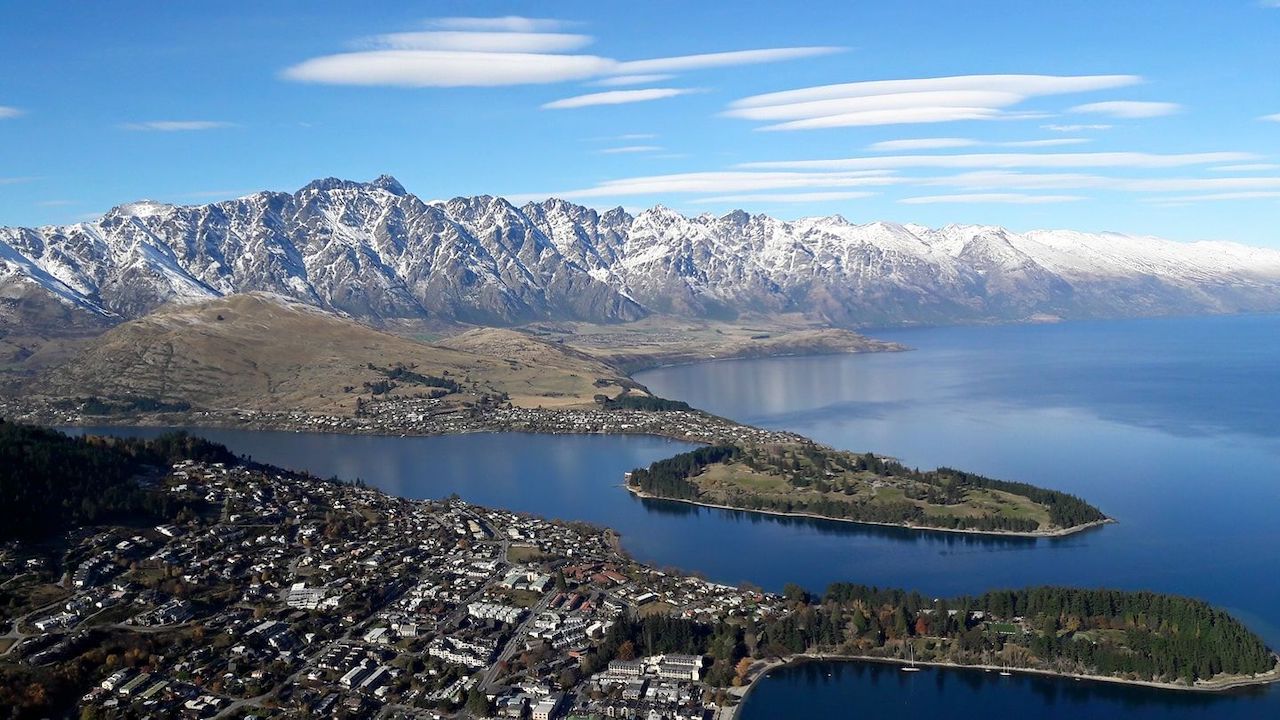 The Skyline Gondola attracts millions of annual visitors because the views from the top are simply jaw-dropping. Ride it and you’ll agree. The view of Lake Wakatipu, New Zealand’s third largest lake, is awe-inspiring. Because of the lake’s unusual shape, Lake Wakatipu has rising water levels: every 25 minutes, the water rises and falls around 10 centimeters. Maori legend suggests that there’s a monster lying at the bottom of the lake, known as Matau, and with each rise of the lake, his heart beats.

Beyond the lake, located on the southeastern shore, is the stunning mountain range that’s popular in the ski season: the Remarkables. Many reasons are given for the range’s name, the most convincing of which is that early settlers were simply stunned by the incredible view, hence the term “remarkables.”

Many tourists ride the gondola to get the panoramic view of the ranges from the top. What they miss out on, though, are the different perspectives gained from cycling the downhill tracks. From the top, the downhill ride offers plenty of places to just stop and take it all in.

The gondola ride is an adventure of its own. 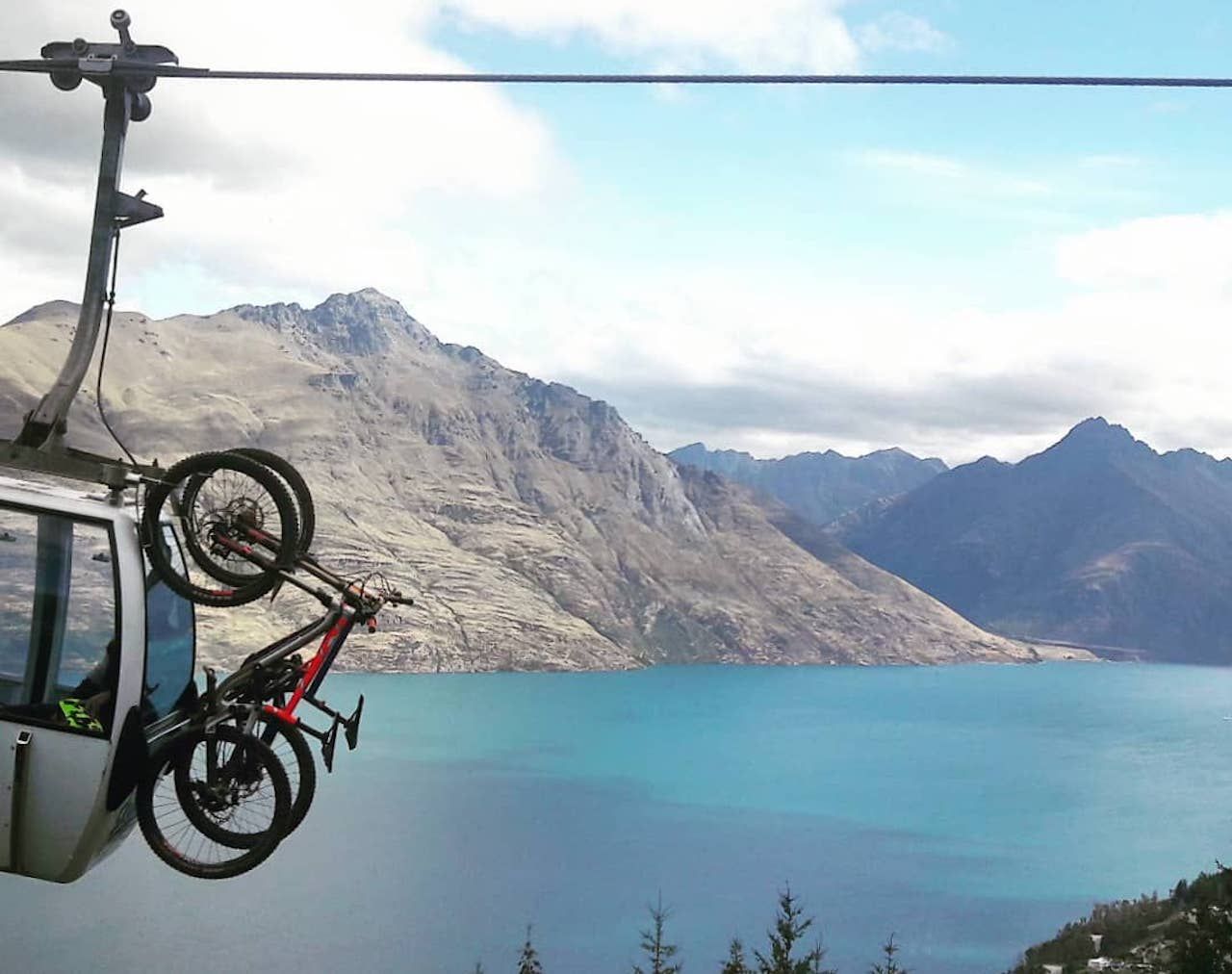 When you enter the base of the gondola, the crew attaches your mountain bike to the cabin. As soon as your bike is unclipped at the top, you’ll have access to over 30 world-class trails — or 20 miles of adrenaline-inducing trail options, ranging in difficulty from beginner green to double black.

The six-minute gondola ride is an adventure in itself, with a vertical rise of nearly 1,500 feet at a 37-degree incline. The gondola has been around for nearly 50 years, allowing both locals and tourists alike to skip the hike and take the fast lane up Bob’s Peak. The first gondola traveled up to the peak in 1967. Since then, the gondola has one tourist accolade after another, including New Zealand Tourism’s “Best Visitor Attraction” and “Best Adventure Tourism” product.

The four-month trial season for New Zealand’s first gondola-assisted bike lift began in January 2011. By September, the bike park and gondola lift reopened for an eight-month season with similar success. The park now opens every year in the warmer seasons from September to May.

You can choose from over 30 world-class trails. 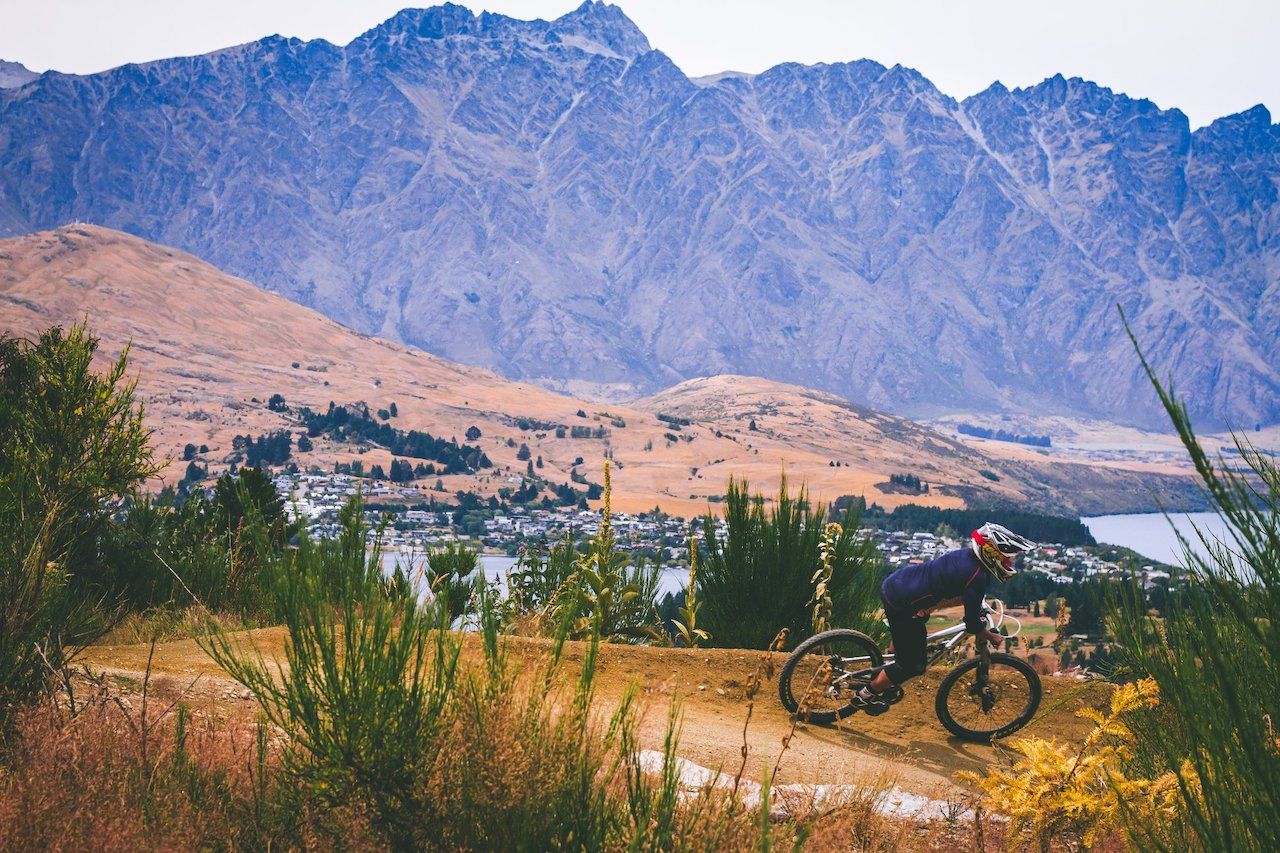 The Queenstown Bike Park prides itself on its world-class trails and the expert riders that flock to New Zealand to ride downhill each year. Some professionals make Queenstown their homebase during the mountain biking season, as the Skyline is perfect for both freeriding and race training.

Each track has a themed name, and funny and peculiar tracks continue to pop up each year, such as the Single Track Sandwich, the Slippery Ninja, and most recently, “Huck Yeah!” One of the tougher trails is the “Hobbit,” named after the beech forest scenery seen in the Tolkien movie adaptation.

There are plenty of options for your adrenaline needs. 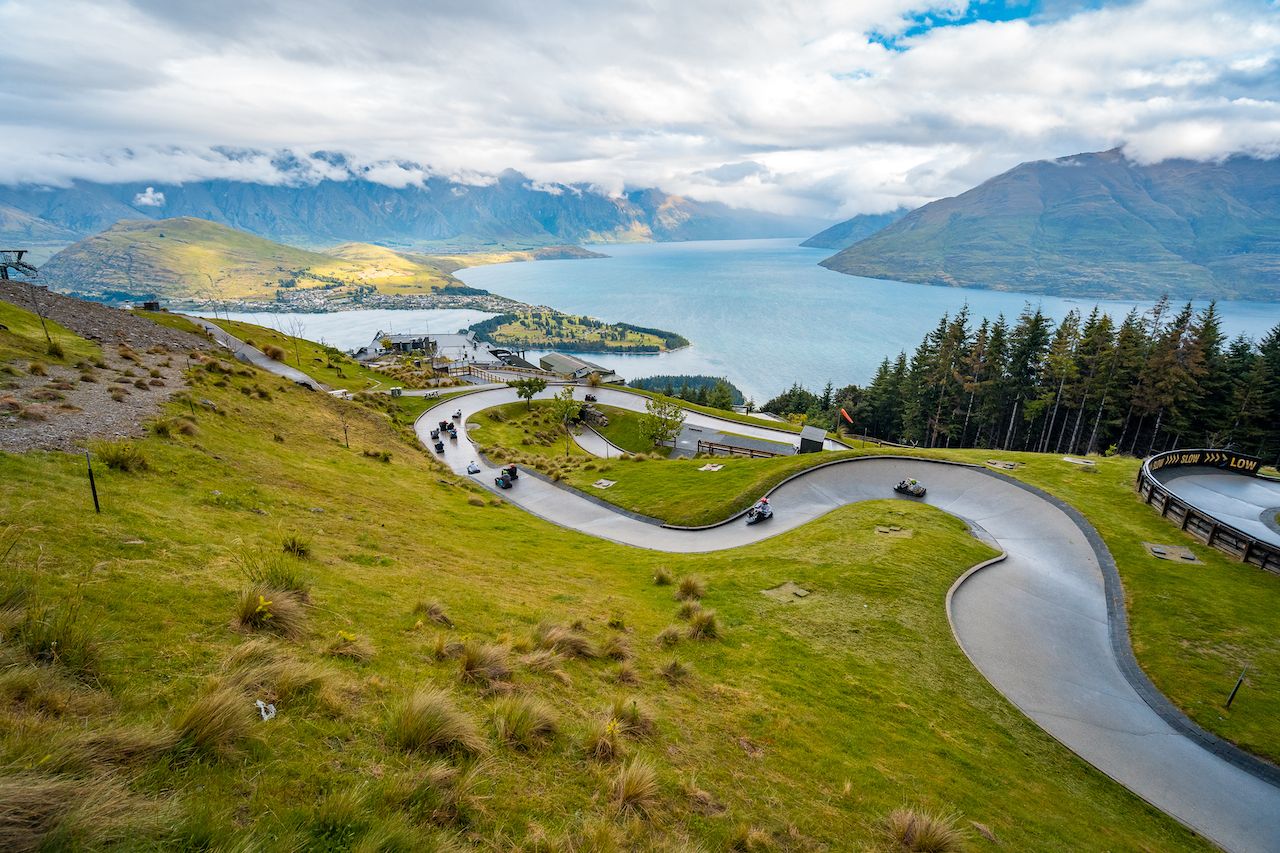 Once your legs and forearms are shot after all of that mountain biking, try the descending on the crazy luge carts. New Zealand’s version of the Mario Kart race track is near the entrance to the downhill mountain biking. Leave your bike on a secured rack overlooking the Lake and take the recently-refurbished chairlift up to the luge start line. Opened in 1997, the Queenstown luge, owned by Skyline Enterprise, has since been replicated in Singapore, Canada, and South Korea.

Other springtime activities for the outdoorsy types include a round of golf at Millbrook Resort or The Hills, a day hike on the Routeburn Track, or the usual adrenaline-filled attractions in the area such as skydiving, bungy jumping, jet boating, white water rafting, paragliding, and swinging on the Nevis Swing across a gaping canyon.

Apres drinks are minutes away. 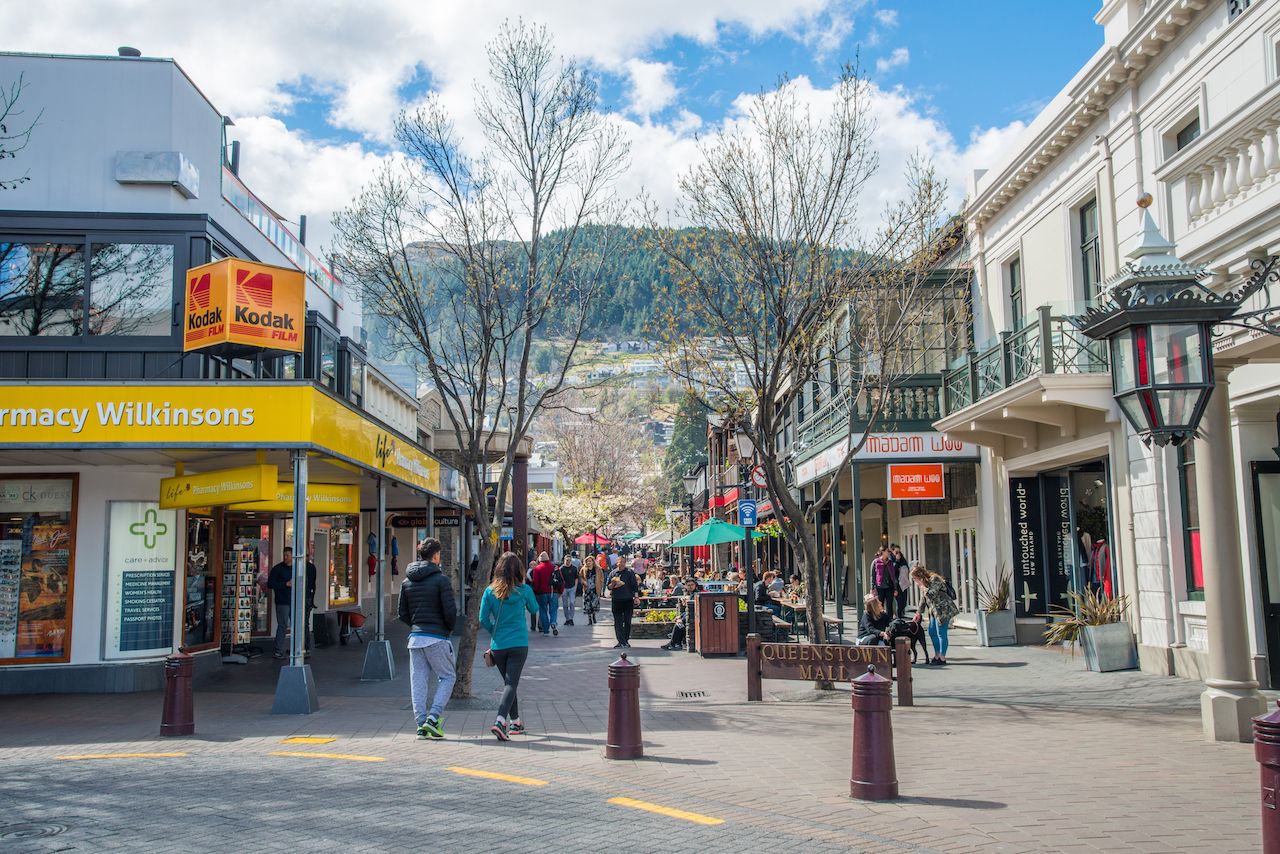 Most of the time, mountain biking involves going pretty far out of town. At the Skyline Bike Park, you’re practically in the center of Queenstown. If you need to head back to your hotel at any point, you’re only a five-minute ride away.

Before you even reach the gondola, you’ll need a mountain bike. Many of the stores in town can hook you up with both a bike and a lift pass, or a guided tour if you’re feeling lost about your experience level or which tracks to take.

For the apres activities after a half or full day on the tracks, the friendly staff at Atlas Craft Beer Cafe will take care of you. Located on the Steamer Wharf, Atlas has 22 craft beers on tap and regularly supports the local Queenstown Mountain Bike Club through fundraising events.