Sex is the one and only way to perpetuate the existence of the human species and, whether we like it or not, it’s part of everyone life in a variety of ways. To break taboos associated with sex and bring sexuality into a positive light, David Gluck opened the Museum of Sex in New York City in 2002. The museum is dedicated to showcasing the full history of human sexuality, as well as its evolution and cultural significance. Whether you’re shy but curious or well-versed in the art of passion, the Sex Museum in New York City is an eye-opening and fun experience for all.

The best times to visit the Museum of Sex

Entry to the Sex Museum is timed to control crowd sizes so there’s no real difference in what time and date you pick. However, the museum does charge $3 more on weekends. The ticket website also lists certain times as “peak,” meaning that those are popular times. Peak times include all day on weekends, and the late afternoon and evening on weekdays. If you’d rather visit when the Sex Museum is empty, then going early or mid-afternoon on a weekday is your best bet.

Where to start your visit at the Museum of Sex? 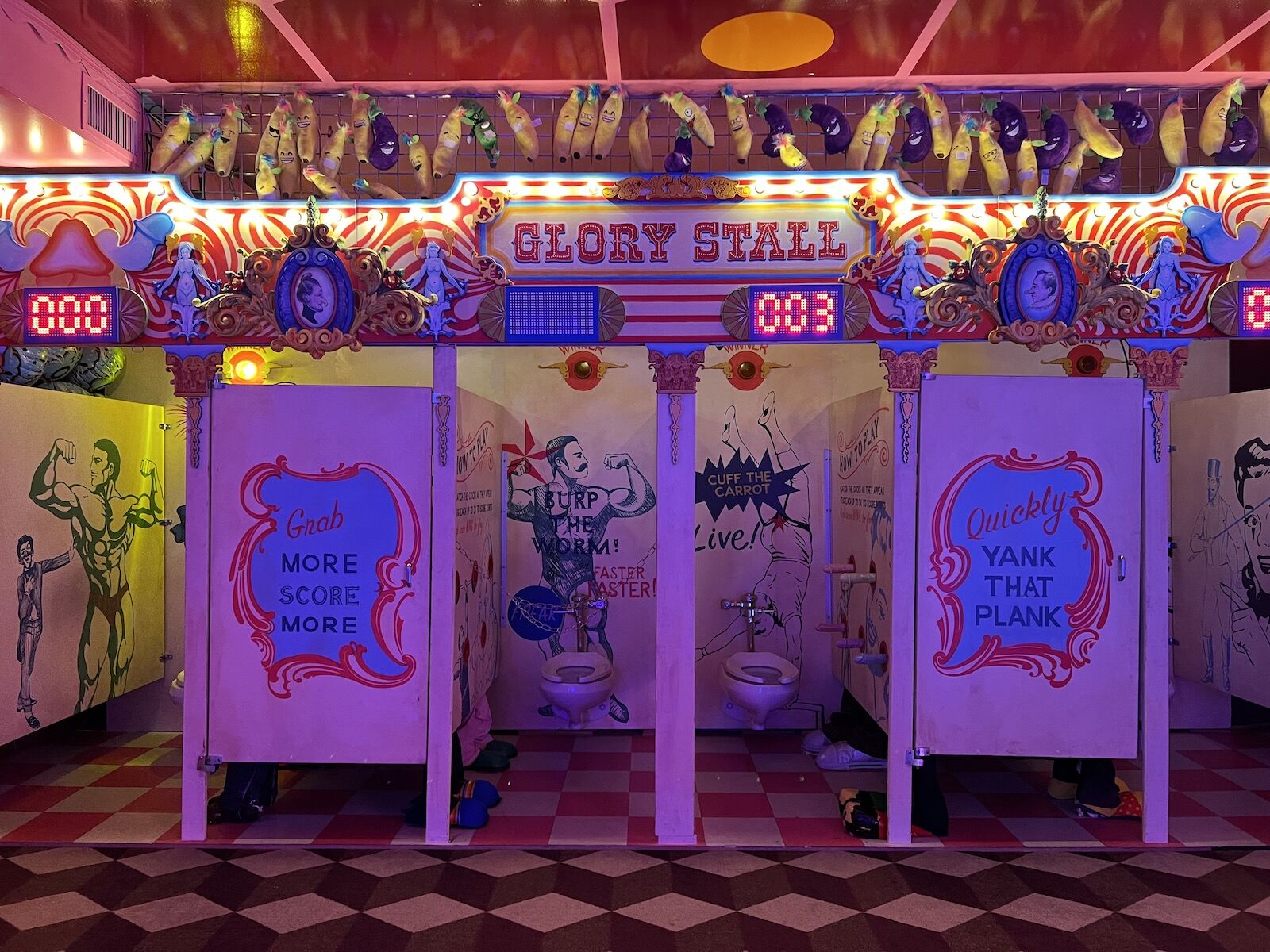 Visitors will have to go through the first side before they can venture into the second, but it’s better that way. You’ll learn first and then be able to play armed with that knowledge. The best way to experience each side is to go in the pre-labeled order. Start on the second floor and continue going up, visiting each floor. Once you’ve reached the top of the first side, cross over to the entrance of Super Funland. After that, make your way down floor by floor.

How long should I budget to visit the Museum of Sex?

The amount of time you should allot is dependent on how much you want to read. The first side of the Sex Museum provides a lot in terms of visuals, but they’re all accompanied by small plaque cards with information. We highly recommend taking the time to go through and read everything so you leave having learned something new and perhaps gained a different perspective on sex. If you do that and take part in everything at Super Funland, the whole experience should take two hours.

The Museum of Sex’s first half

The Sex Museum is made of two parts: the first part is a typical museum with galleries filled with artifacts (sex-related artifacts, of course); the second part is Super Funland, a sort of amusement park with games and rides on the theme of sex. Here is a breakdown of what you’ll see in the first half of the Museum of Sex. 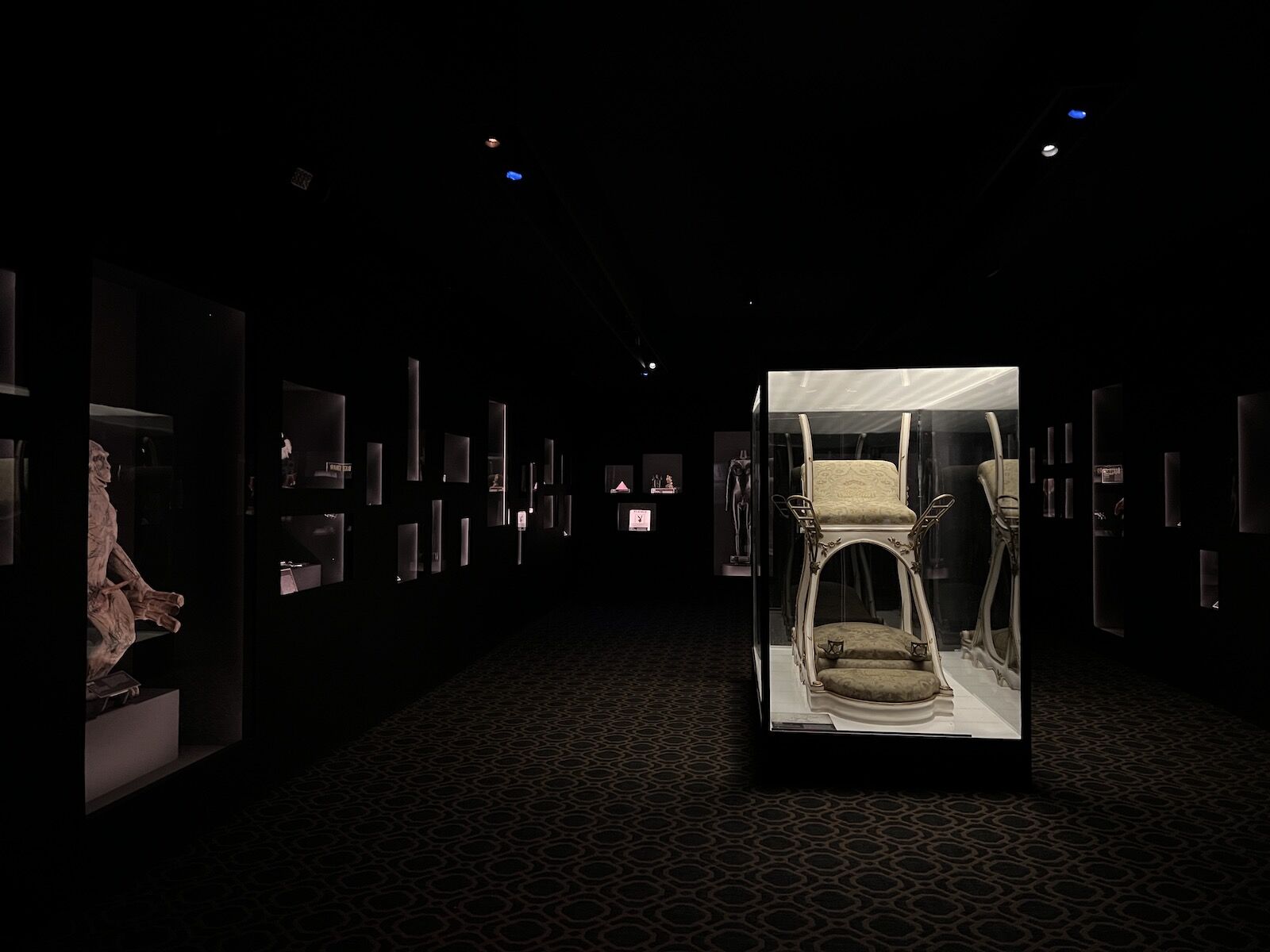 Dominating the center of the room is a replica of a contraption used by King Edward VII to have sex in different ways with multiple people all the while putting in minimal effort himself. Other objects featured range from gynecological tools to sex toys. 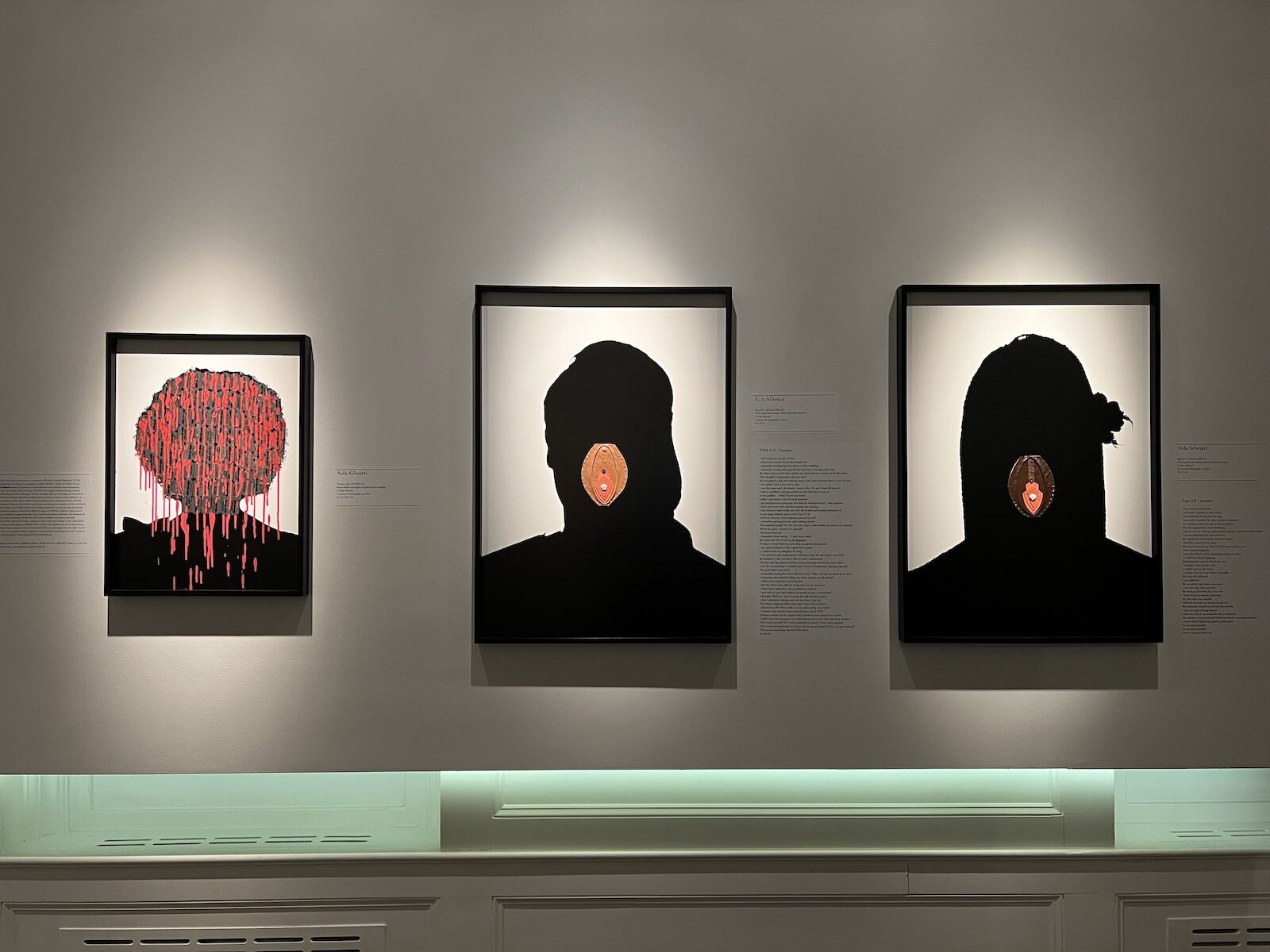 The third floor features an exhibition dedicated to addressing sexual violence. As sex and violence share a complex history, the museum aims to spark dialogue and promote a safer, more liberated sexual culture. It asks visitors to “bear witness both to the reality and history of sexual trauma, and to the resiliency, agency, and healing power that survivors of such trauma manifest.” To this end, many of the information cards have italicized questions addressed to museum-goers to provoke introspective thought.

The works on display are from fourteen international artists, all of whom have experienced sexual violence. They range from photos of protests to abstract portraits to video interviews. One of the most powerful works from this exhibition is the series of silhouetted portraits by Aida Silvestri. As a survivor of female gential mutilation (FGM) herself, Silvestri interviewed other survivors and then created potraits that depict the types of FGM they experienced. Accompanying each portrait is what Silvestri calls ‘poems’ of the women’s stories. 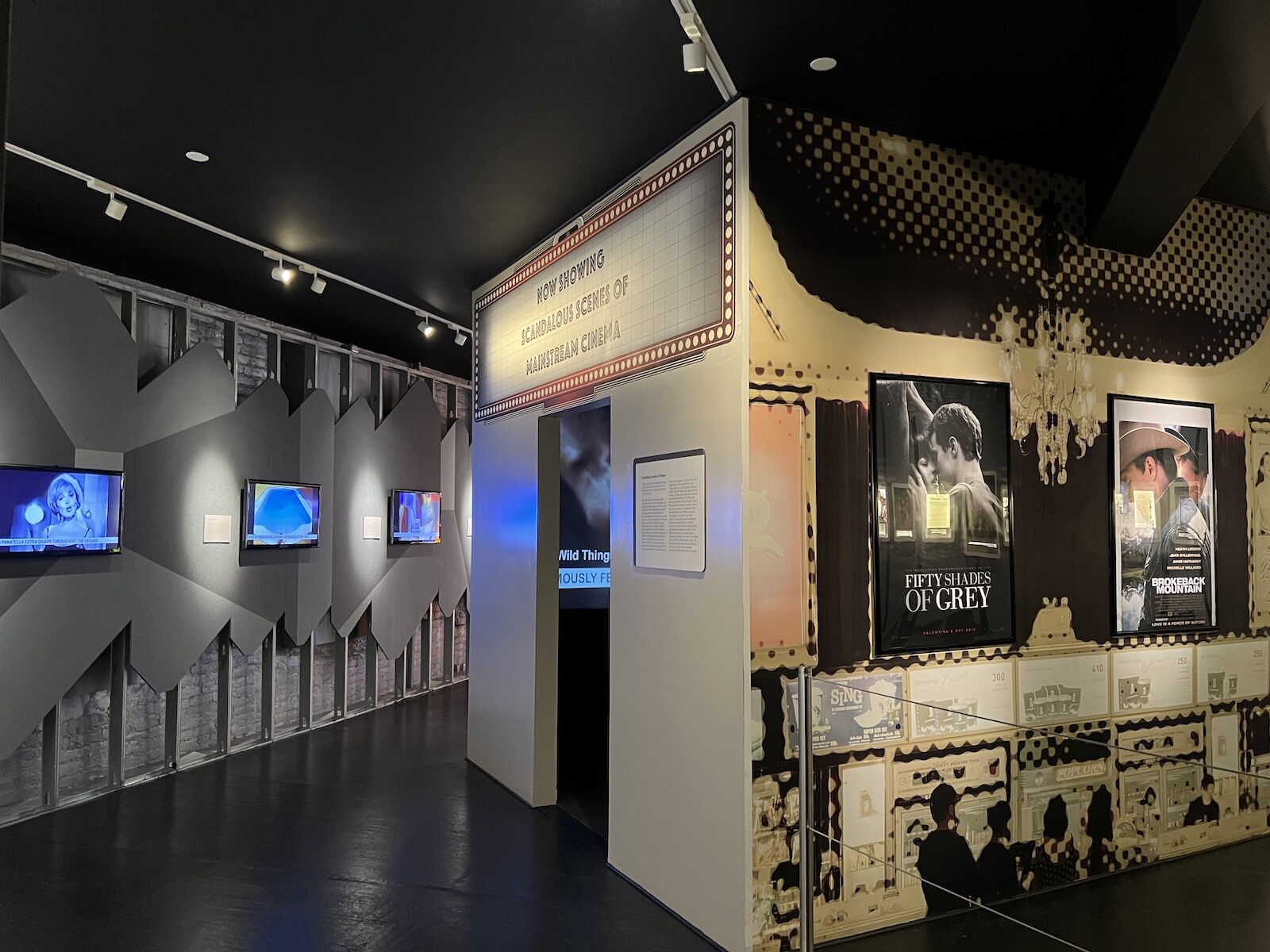 The Museum of Sex’s second half: Super Funland 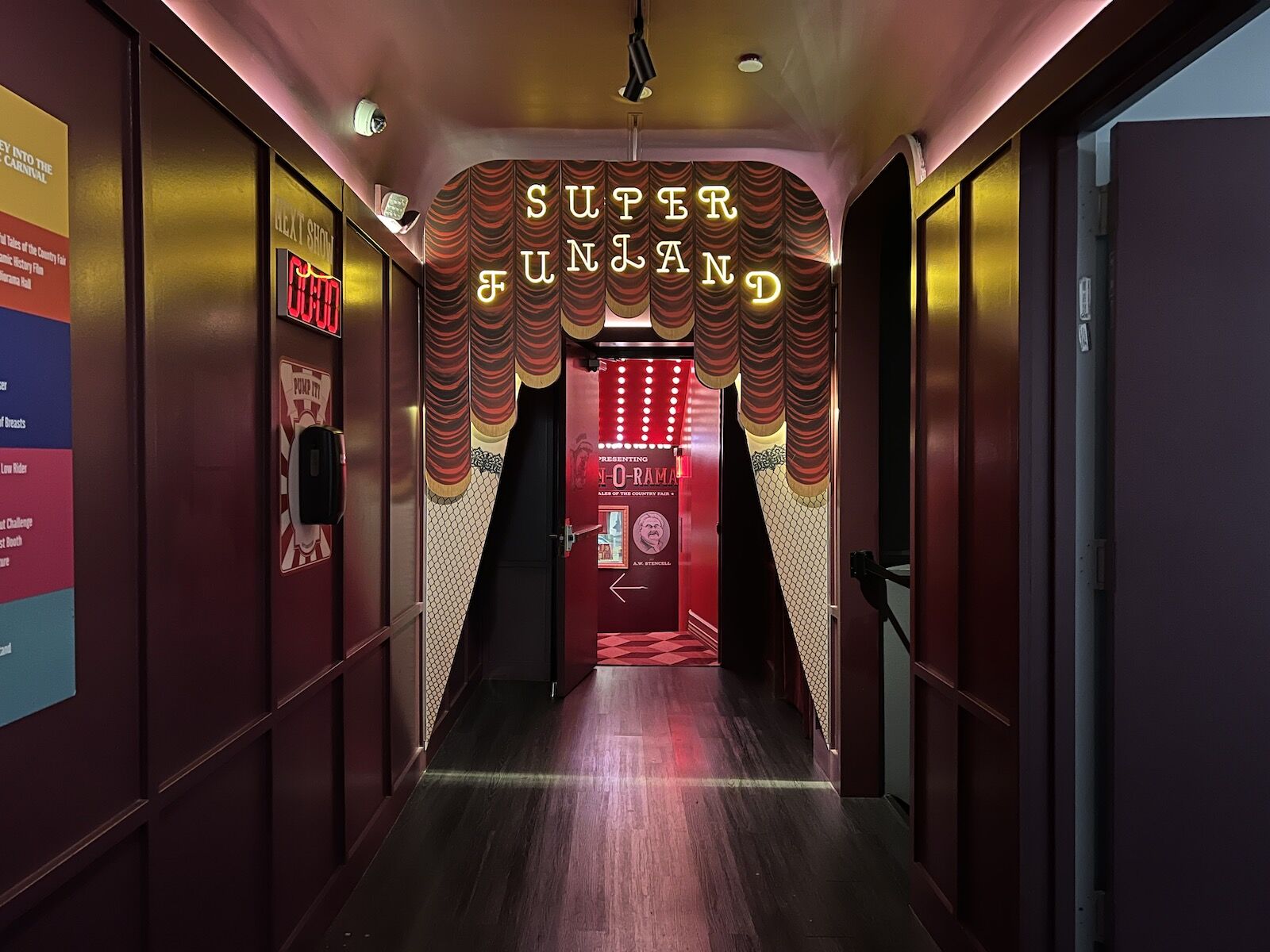 A hallway of carnival dioramas leads to a theater room where all are asked to watch a seven-minute film about the sexual history of the carnival. The film traces the bacchanalian origins of the carnival from ancient civilizations to the 20th century.

After the visioning, visitors head down to the third floor, Lucky Land. This is where you can play a number of games, such as the Love & Lust Deity Derby which is similar to a balloon blast game where you shoot water and something behind the target moves, racing against other participants. There are claw games, a RuPaul-led fortune telling machine, and a 4D-ride into the tunnel of love. Lucky Land is also home to a breast-themed bouncy castle.

The second floor, the Pink Palace, is aptly named as almost everything is in shades of pink, red, or purple. The attractions here are a slide that goes from the second to first floors, a biometric makeout challenge (which is now altered to measure holding hands), a whack-a-mole type game, and a mechanical bull ride.

The last floor, the Lollipop Lounge, is home to the carnival bar and concession stand. At the moment it’s closed due to COVID-19 precautions, but on a regular day you can chill out there with a drink or snack in hand. The lounge has a pole star dance stage where you can pose and take fun photos to music.

How long does it take to go through Super Funland?

Super Funland, the second part of the Sex Museum, takes about one hour. The whole museum takes between two hours to visit, and that’s if you’re thorough in the first part of the museum, looking at the artifacts carefully and reading the plaques.

Museum of sex Tickets and hours of operation

Visitors have to be 18 or older to enter the museum (ID will be checked) and there’s no discount pricing for students. Generally tickets will cost anywhere between $60 to $65 depending on entry time, but the museum has had tickets on sale for $36 to $39. It’s recommended to buy tickets online in advance to secure your preferred time and date, but tickets are also sold on site.

Can you take pictures in the Museum of Sex?

Photography is allowed in the Museum of Sex, but with only “small hand-held devices”, the museum’s website says, and without using the flash.