Greek cuisine is classic Mediterranean. When in Athens, you don’t need to go to a pricey restaurant to enjoy delicious Greek food. Instead, venture the streets of Athens for substantial, good value, easy-to-grab meals. 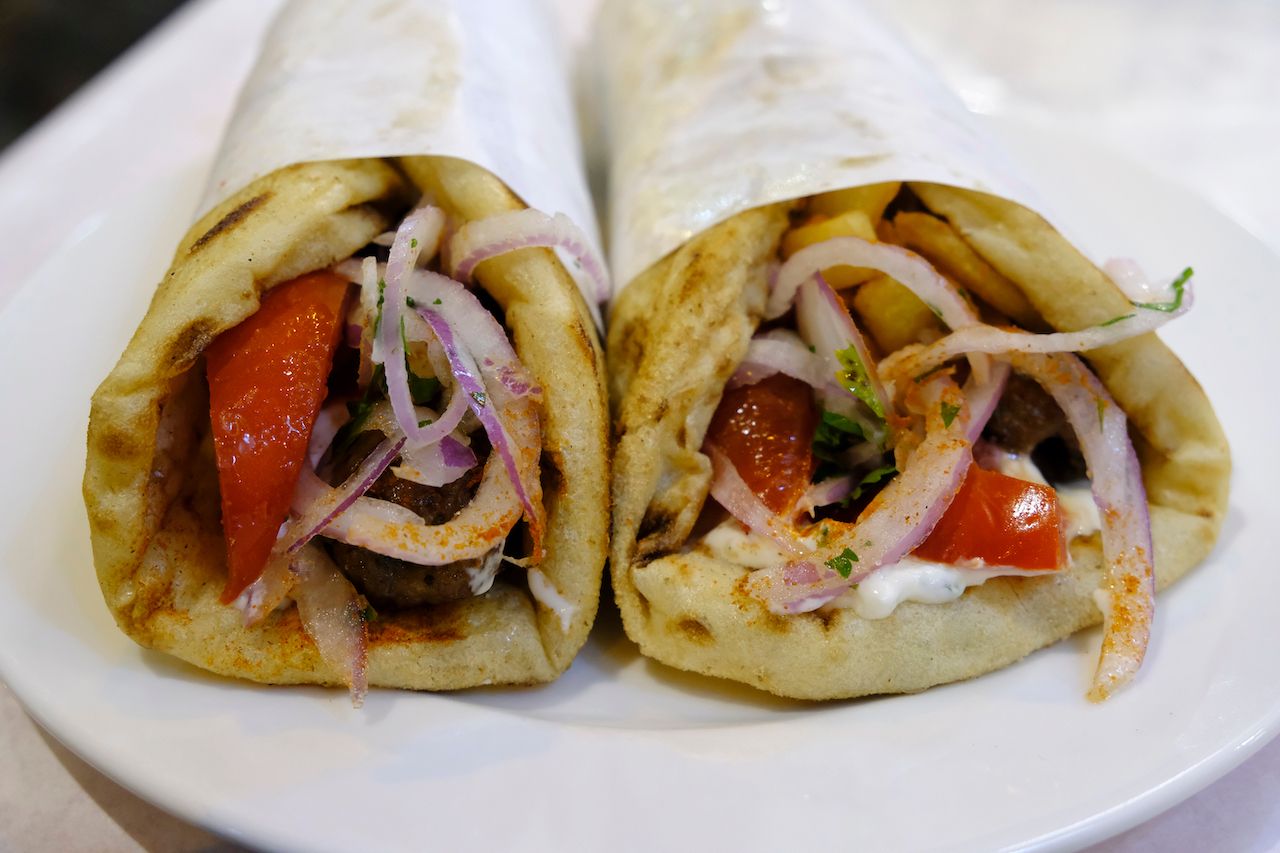 For over a century, souvlaki has been the king of Greek fast food. It’s made up of small pieces of skewered pork, chicken, or grilled beef that’s wrapped in pita bread and garnished with tomato, onion, and fries. The whole thing is sprinkled with parsley and covered with tzatziki (yogurt, garlic, and cucumber sauce). If one of those don’t fit your fancy, you can adapt the ingredients and dressing to your palate. Gyros are served in a similar way, but are centered around marinated pork or chicken that’s slowly cooked on a rotating skewer. Nowadays, most souvlatzidika (grill houses) also serve vegetarian souvlaki with falafel or grilled vegetables instead of meat. 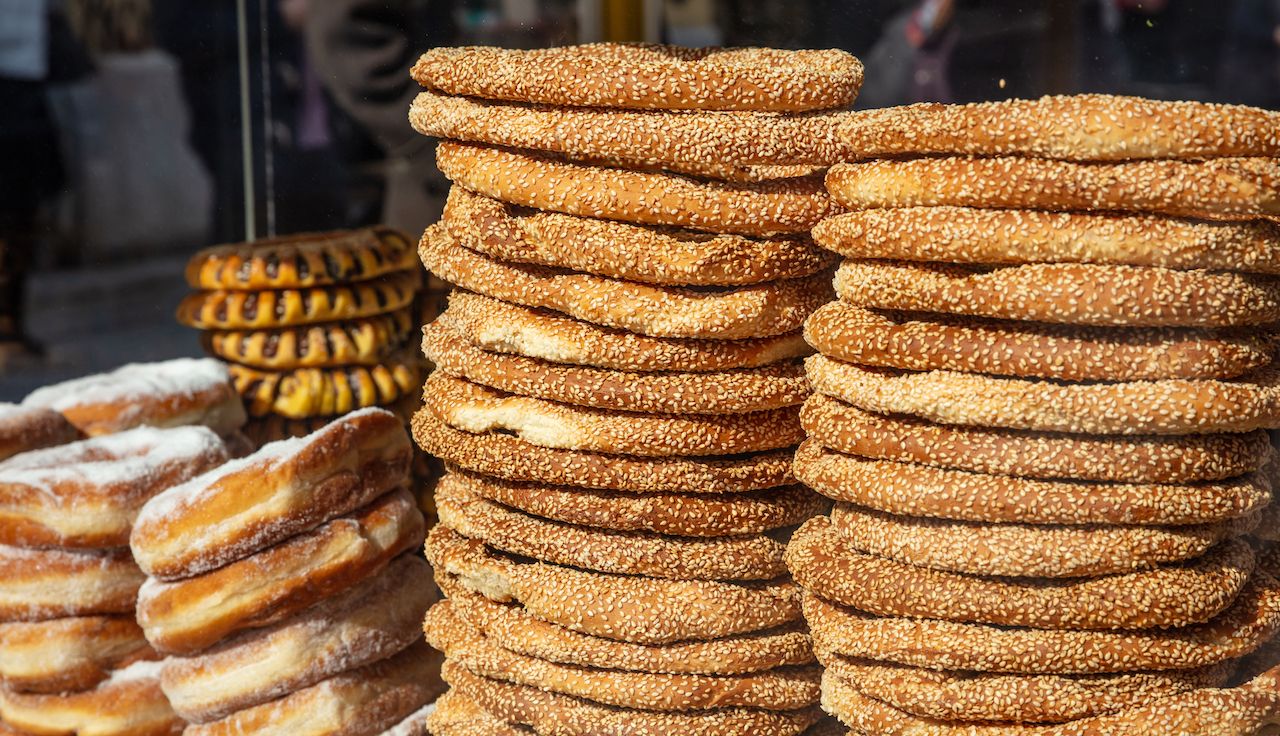 Whether you’re rushing to an early morning sightseeing tour or coming out from the club in the early hours, koulouri is there for you. Koulouri is a healthy round-shaped bread that’s soft or crunchy and smothered in sesame seeds. The first to introduce the traditional koulouri recipe in Greece were the refugees from Anatolia who settled in Thessaloniki, Greece’s second-largest city. Koulouri now comes in flavors like multi-seed, tahini, whole wheat, or filled with cheese or meat. You’ll spot the vendors from the wicker baskets stationed in central spots and outside night venues. 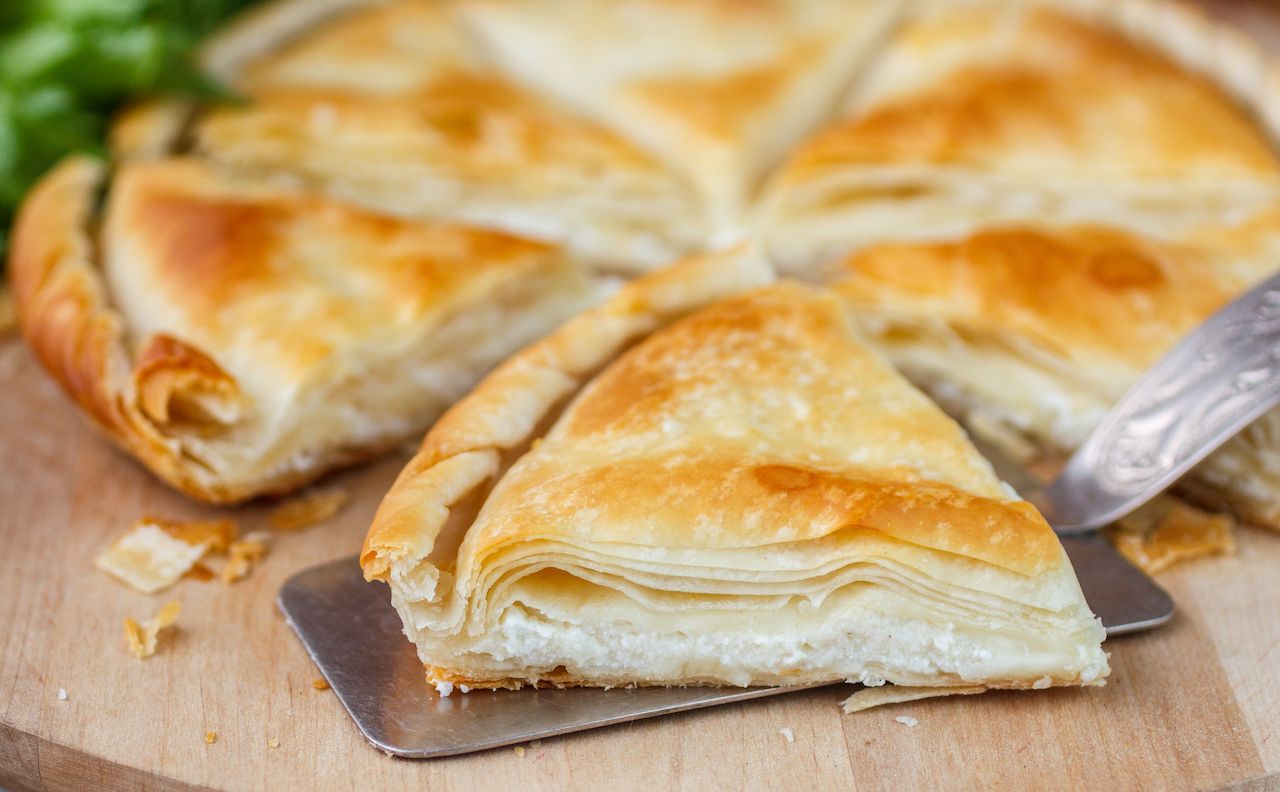 Tiropita, or cheese pie, is one of the most adored on-the-go breakfasts for Greeks of all ages and social groups. The pastry dates back to ancient Greece, when it contained honey and garlic. Today, you can find tiropita at every bakery, but note that it disappears from most shelves by late morning. There are different types of tiropita, such as kourou (from the Turkish word for dry and fat-free), twisted, and traditional with filo pastry. The fillings depend on the chef’s creativity and the availability of fresh ingredients. 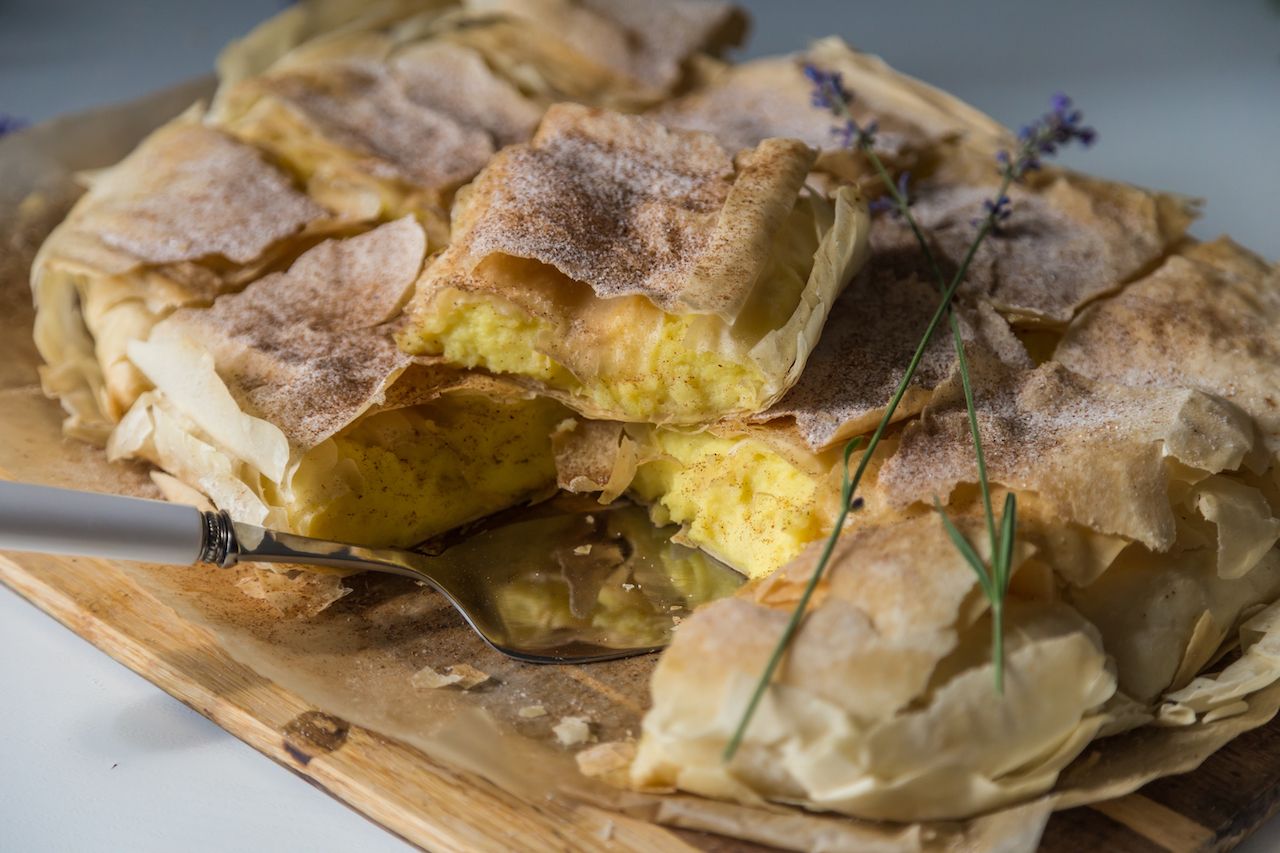 While the origins are debated — some say bougatsa comes from the Italian focaccia, others say the Turkish pogaca — it is known that bougatsa flourished in northern Greece before making its way down to Athens. Like tiropita and other pies, bougatsa is commonly found in bakeries, but if it’s your first time trying this creamy dessert sprinkled with powdered sugar and cinnamon, it’s better to opt for a bougatsadiko, which is a bakery that specializes in bougatsa. 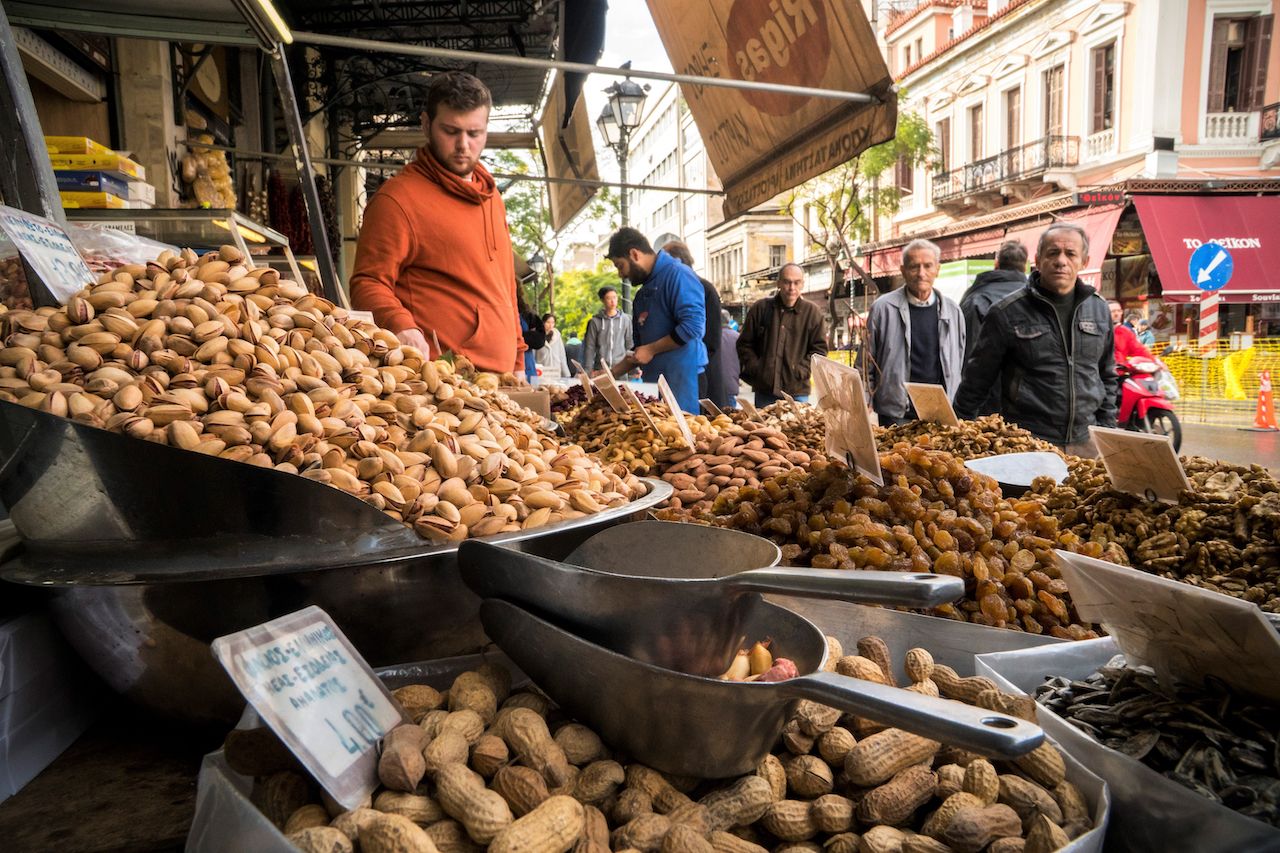 Pistachios, walnuts, almonds, pecans, dried figs, and apricots — or, even better, a mix of all — are a popular accompaniment to pre-meal drinks, and bars serve complimentary bowls of this mix. Nuts are also added in dessert recipes or used for stuffing in savory dishes such as stuffed tomatoes. You’ll find at least one nut store in every neighborhood. 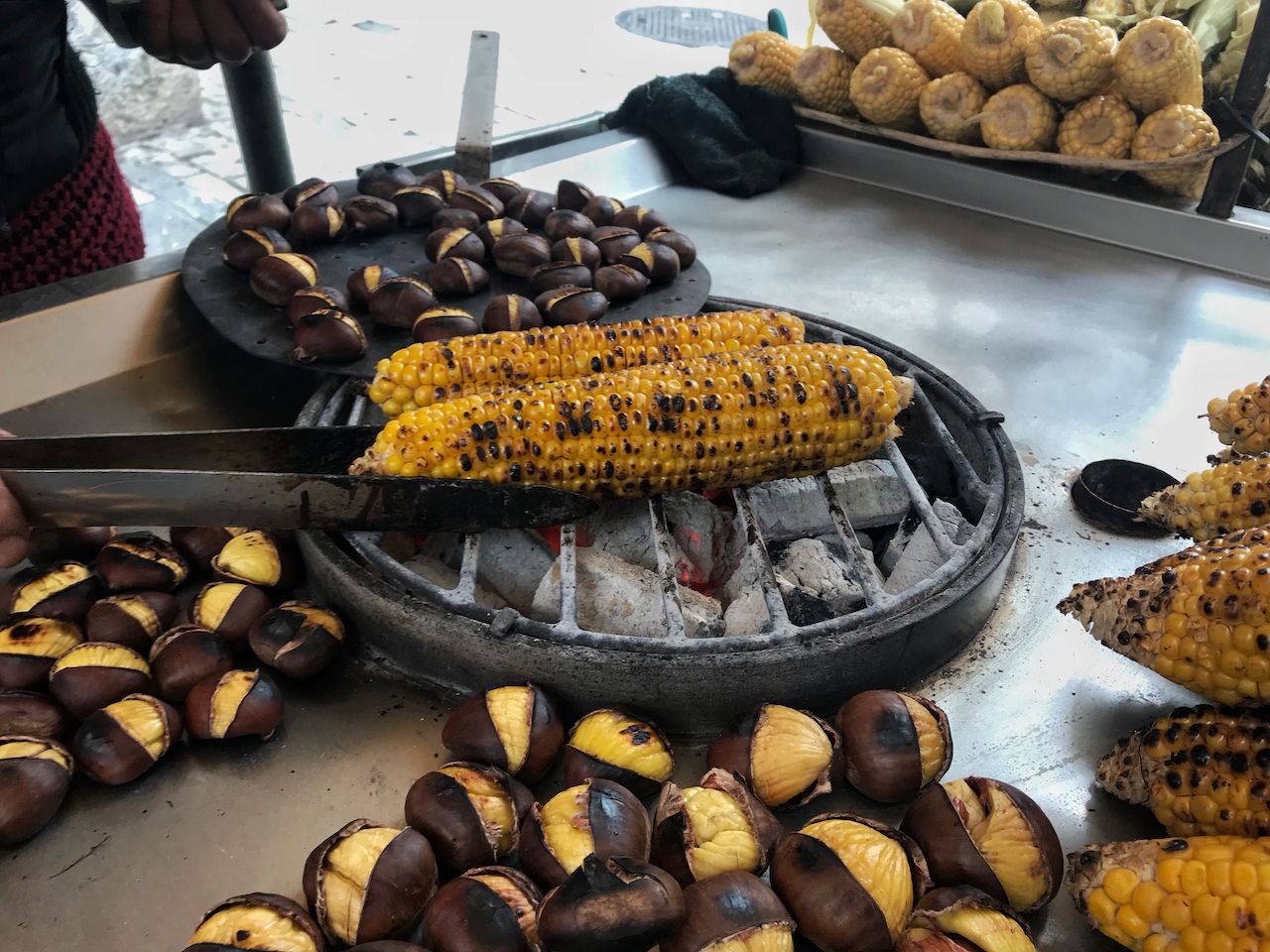 While technically a nut like those in the above category, chestnuts deserve a special mention. The smell of roasted chestnuts in the central streets of Athens is associated with the beginning of autumn and nostalgia for the summer that is gone. Even though there are fewer sellers than in the mid-50s, some proudly persist in being part of the ever-changing Athenian street-food scene. The seasonal presence will warm up your coldest days in Athens. If you chat up the veteran vendors, you will not only find out the secrets to a delicious chestnut, but you may also get a glimpse into the many stories of the city from these discrete and humble observers. 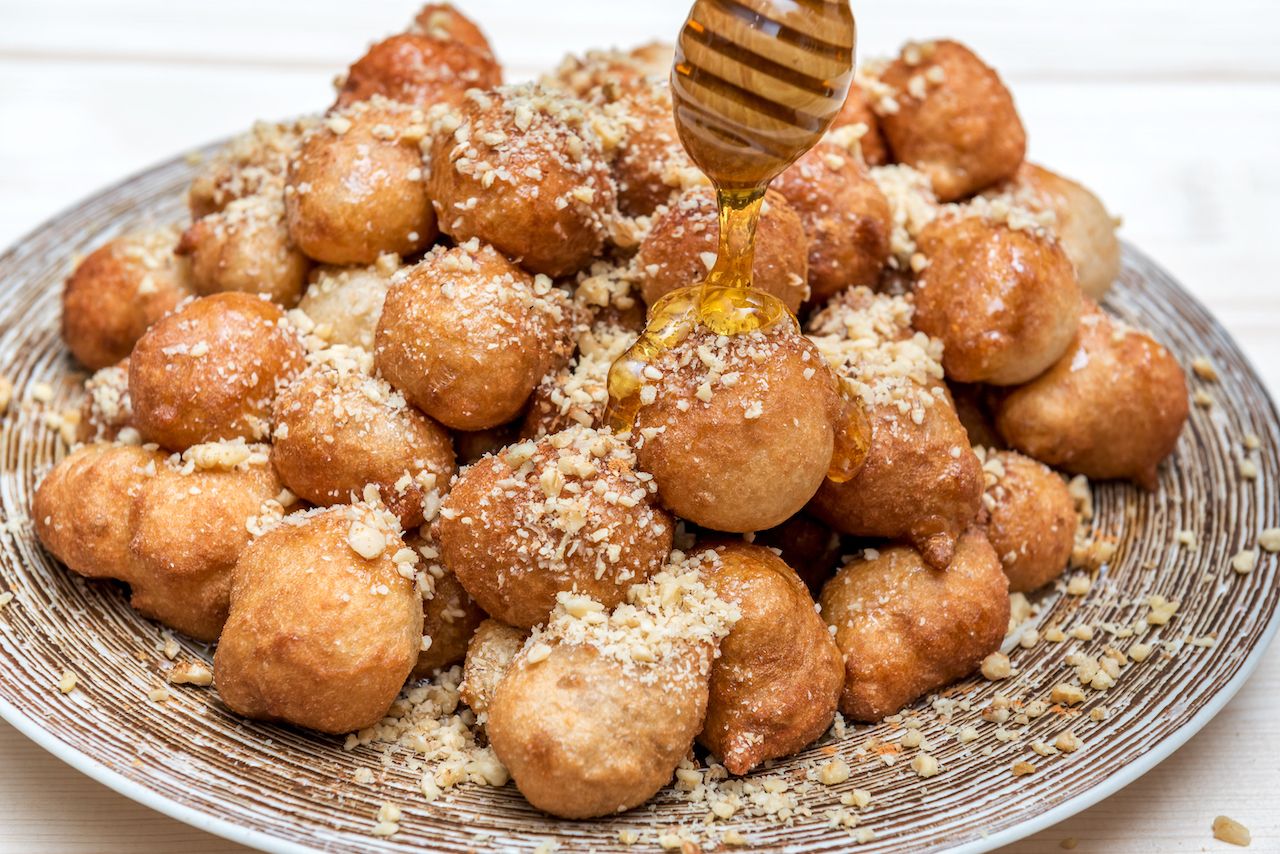 If you replace savory meals with dessert, then loukoumades is the right street food for you. These deep-fried, bite-sized dough balls made with flour, dry yeast, water, and starch are deeply rooted in Greek history. The first record of this pastry dates back to ancient Greece, and similar sweets are mentioned in Aristotle’s writings. Traditionally, loukoumades are served hot, drizzled in honey, and covered with cinnamon.