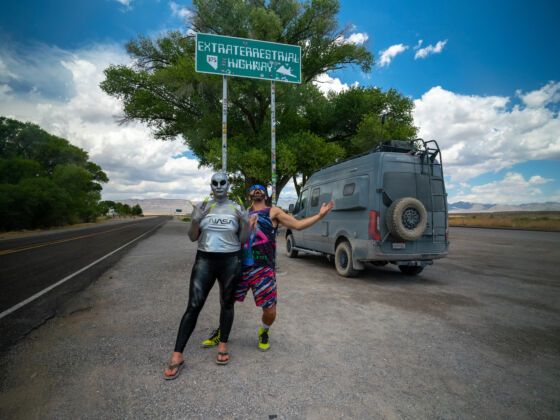 In most places, if you want to up your odds of experiencing something extraterrestrial, you’ll need to cross your fingers and keep your eyes on the skies.

And then there’s Nevada.

Home to Area 51, the secret, off-limits government base supposedly hiding proof of alien aircraft and technology, Nevada is the setting of many of the country’s juiciest stories about extraterrestrial activity. From hotbeds of UFO sightings to alien art and the backdrops to your favorite sci-fi movies, you’ll find weird and wild destinations dedicated to all-things-alien simply by following a short, looping road trip north out of Las Vegas. On the Extraterrestrial Highway, alien artifacts can be found around nearly every turn, though some may be in the form of offbeat roadside attractions rather than actual little green dudes and their flying saucers.

If you believe the truth is out there, set off on this three-leg, three-day road trip through the lesser-seen side of Nevada. Be sure to carry water and snacks when you’re driving through the desert — and maybe download a few alien-themed playlists in advance, too. Ready to make contact? Let’s go.

This guide is proudly produced in partnership with Travel Nevada.

Set out in the morning from Las Vegas, heading towards Pahranagat National Wildlife Refuge. It’s about 90 minutes north of the city and covers 5,380 acres — for reference, the original gaming strip in Las Vegas was only 110 acres. There’s a lot to see here.

The refuge covers lakes, marshes, meadows, and desert, and it’s home to a wide variety of wildlife thanks to that ecological diversity. While visiting, you may see bald eagles, rattlesnakes, coyotes, desert tortoises, (aliens?) and more than 250 bird species. The refuge has seven miles of hiking trails where you’re likely to encounter more lizards than people, as well as a visitor center where you can sign up for guided programs or learn about the Indigenous Paiute people, whose history in the region goes back thousands of years.

So long as your legs are still feeling strong, set your GPS toward a few of the sites within Basin and Range National Monument. It’s about an hour’s drive north of Pahranagat and the town of Alamo — depending on where you land, as it’s massive — and you’ll want a good off-road vehicle (or at least a car with high clearance) to drive the monument’s roads. You’ll find well-preserved American Indian petroglyphs in the White River Narrows and Mount Irish Archaeological Districts, and rock arches, formations, and cacti-dotted landscapes that photographers will flip over throughout the monument.

Once night starts to fall, you’ll need more of a plan. Many people traveling this way camp in the monument — it’s a great spot to practice your astrophotography or, if you’re lucky, UFO photography — but you’ll find affordable roadside accommodations in nearby towns as well, like the Sunset View Inn in Alamo.

Leg 2: Beaming along the E.T. Highway

From whatever accommodations you chose for the night, make your way to Crystal Springs, the official start of the E.T. Highway. Begin the odyssey at the E.T. Fresh Jerky store in Hiko (at the junction of US-93 and Highway 318) to stock up on road trip eats and drinks — you’ll know you’re there when you see the giant alien cowboy mural, the first of many essential selfie spots during your travels today. The store offers a wide selection of snacks and small-batch treats, plus plenty of funky souvenirs. Be sure to take photos with the alien murals and backdrops and try as many types of “alien jerky” as you can stomach.

Your next stop, the enigmatic-sounding Alien Research Center, is only a few miles away, though you should also pull over quickly and take a photo at the E.T. Highway sign at the start of Highway 375. About three minutes later, you’ll see the 20-foot-tall alien marking the entrance to the research center. This is the real kick-off to your tour, and staff in the shop are genuinely happy to chat for as long as you’d like about alien sightings and where to go for the best chance of seeing something inexplicable. Pro tip: Ask for directions to the nearby Black Mailbox, which marks the site of more than a few self-reported UFO encounters.

Next, drive about 30 minutes west on 375 to the town of Rachel, which you may recognize as a set from the hit ’90s flick Independence Day. Head to the Alien Cowpoke Gas & General Store, where you could spend at least an hour on E.T. selfies — make sure to pose with the “road tripping” aliens stationed in the old car out front. Fill up with gas from the alien-covered pumps and stock up on snacks from the store before heading on.

When you’re ready, keep driving the Extraterrestrial Highway toward Tonopah, but take a detour to the right on US-6 to check out Lunar Crater National Natural Landmark. When you arrive, you’ll see where the landmark gets its name: It looks like a giant moon crater, some 430 feet deep. Apollo astronauts from missions 16 and 17 actually trained here to prepare for their groundbreaking work. If time allows, explore a bit of the Lunar Crater Backcountry Byway, which links 20-some other craters, cinder cones, ancient obsidian-laden lava beds, and other out-of-this-world geologic features.

Next up, continue your westward trek to Tonopah, about 90 minutes away from Lunar Crater. Depending on when you arrive, you should have a few hours of daylight before it’s UFO-spottin’ time. History buffs may want to seek out Tonopah Historic Mining Park, a sprawling turn-of-the-century silver mine once known as the “Queen of the Silver Camps.” Dozens of buildings, bridges, and pieces of mining equipment are still standing. It’s only $5 to get in and is open daily with guided and self-guided tour options.

Before dark, check into the Clown Motel for the perfect #WeirdNevada accommodations to cap off your day of hunting aliens. The hundreds (if not thousands) of clown figurines waiting to greet you in the lobby will immediately tip you off that this is not your ordinary motel stay. What’s that you say, clowns don’t spook you? Well, the resident ghosts from the historic cemetery next door might do the trick. Hauntings are kind of a thing in Tonopah — if you end up at The Mizpah Hotel instead, keep an eye out for the “Lady in Red.” Sleep tight!

But first, pack up a blanket, warm clothes, and your camera and tripod in your backpack before heading to dinner at Tonopah Brewing Company. The brewery is known for beer and BBQ, though the fried jalapenos and cheese curds are worth it for sure. No matter what you order, be sure to taste a few beers so you know which to take to-go for the last activity of the evening: UFO spotting. Post up near the Clair Blackburn Memorial Stargazing Park, which has individual stargazing platforms throughout the lawn. Break out your blanket and beers, and keep your eyes peeled to see if you’ll be the next to report a Nevada UFO sighting.

Pro tip: Consider downloading a smartphone app in advance to help you identify constellations in real time, and check the park’s website to see if you can catch a summer stargazing or photography event.

International Car Forest of the Last Church Rhyolite Ghost Town Goldwell Open Air Museum
The truth is out there — have you found it yet? Because today, you’re heading back to Las Vegas, a drive that takes a little over three hours if you do it in a straight shot. But since you’ve got all day, turn it into another quest for close encounters. As long as you’re in Nevada, the adventure’s never over.
Where: Tonopah back to Vegas
Distance: 250 miles
Stay: Las Vegas

When you’re ready, head south on US-95 and piggyback onto another of Nevada’s excellent road trip routes: the Free-Range Art Highway. Your first stop should be the International Car Forest of the Last Church. Created by a local artist, it’s an interactive art exhibition smack in the middle of the desert, filled with dozens of brightly spray-painted cars and buses.

Another hour south and you’ll come to two more great stops: the Goldwell Open Air Museum and the ghost town of Rhyolite. If you do your research in advance, you’ll see that the most recent UFO sighting in Rhyolite was in 2016 — E.T. may be overdue for a visit.

If you have time before getting back to Las Vegas, make a stop at either Mt. Charleston or Red Rock Canyon National Conservation Area. Near Mt. Charleston, hike the Mary Jane Falls Trail to see how diverse Nevada’s landscapes really are. Though most of your trip has been spent in the desert, Mary Jane Falls cascades down a forested cliffband. In Red Rock Canyon, the Fossil Ridge Trail is a great spot to peek at ancient history, especially if you believe life on our planet began when a meteorite seeded with alien cells crashed into Earth — a theory called “panspermia,” if you want to be scientific about it.

One of the best parts of driving to, from, and along Extraterrestrial Highway is that it’s an open-range playground. At any point, you can pull over and search the skies or have an impromptu photoshoot in the desert — and the business owners and travelers you’ll meet along the way are usually brimming with stories to share with their fellow offbeat adventurers. If you love wide-open spaces, vast skies, and feeling like you’re the only human in the world, set aside a few days to explore this outlandish side of Nevada on your next Vegas vacation.

This guide is proudly produced in partnership with Travel Nevada.
✖
travelstoke
Download the mobile app
stoked by